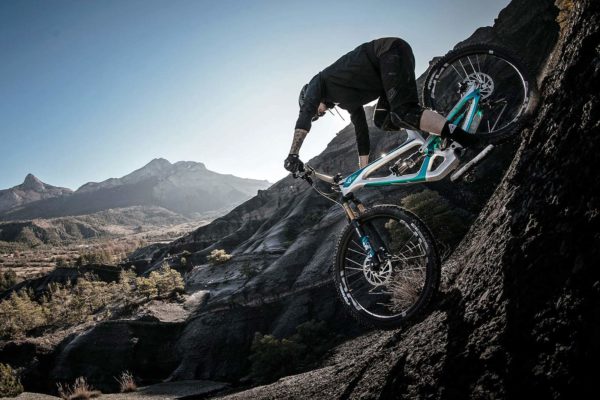 YT just released all the details on their full 2019 lineup, highlighting more options in carbon & alloy for their flagship Tues DH bike and the always popular Capra enduro ride, plus a fresh look at the steel Dirt Love dirt jumper that started it all. While there aren’t any all-new bikes that we’ve not already seen, there are plenty of shiny updates for anyone thinking about dropping in on a new YT mountain bike this season (and some slightly higher $ pricing for the US)… 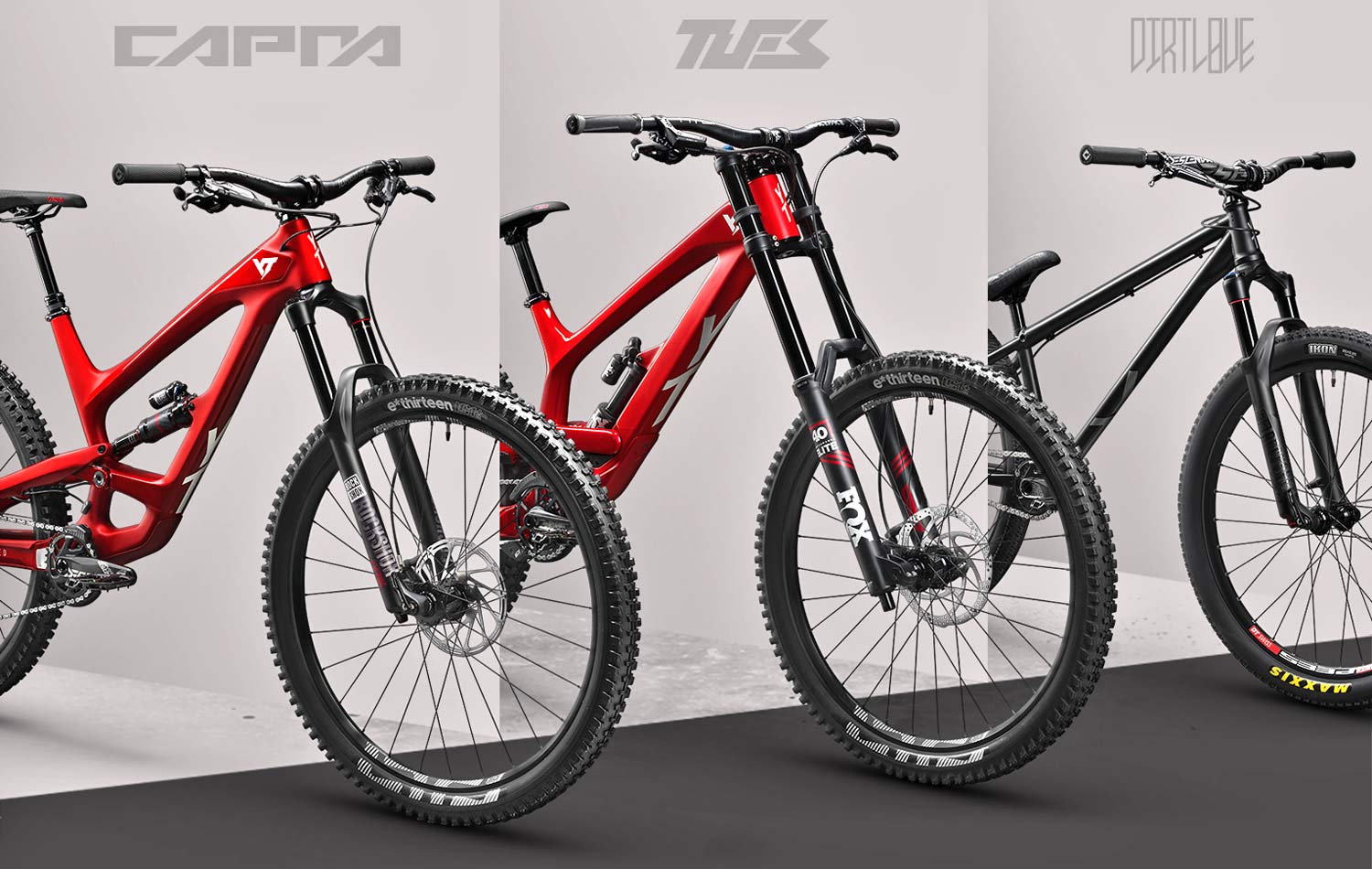 A new year brings shiny new looks and new builds – now available in every model in low-key black/gray/white, then also a second vibrant color if you wan to stand out. 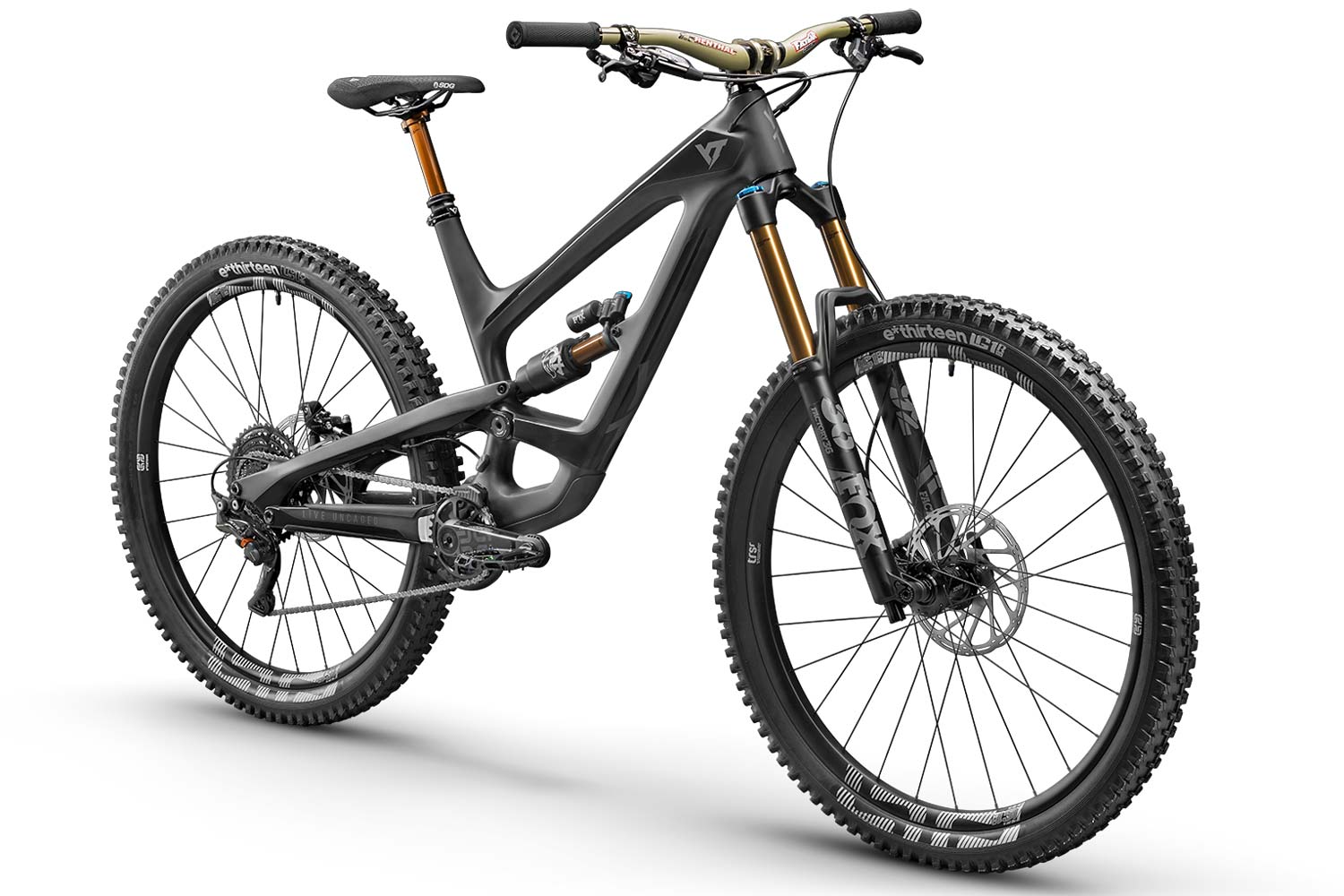 Last winter saw the complete refresh of the enduro Capra in 170mm travel with 29″ wheels & the 180mm travel 27.5 variant that adds a fifth smaller size too. 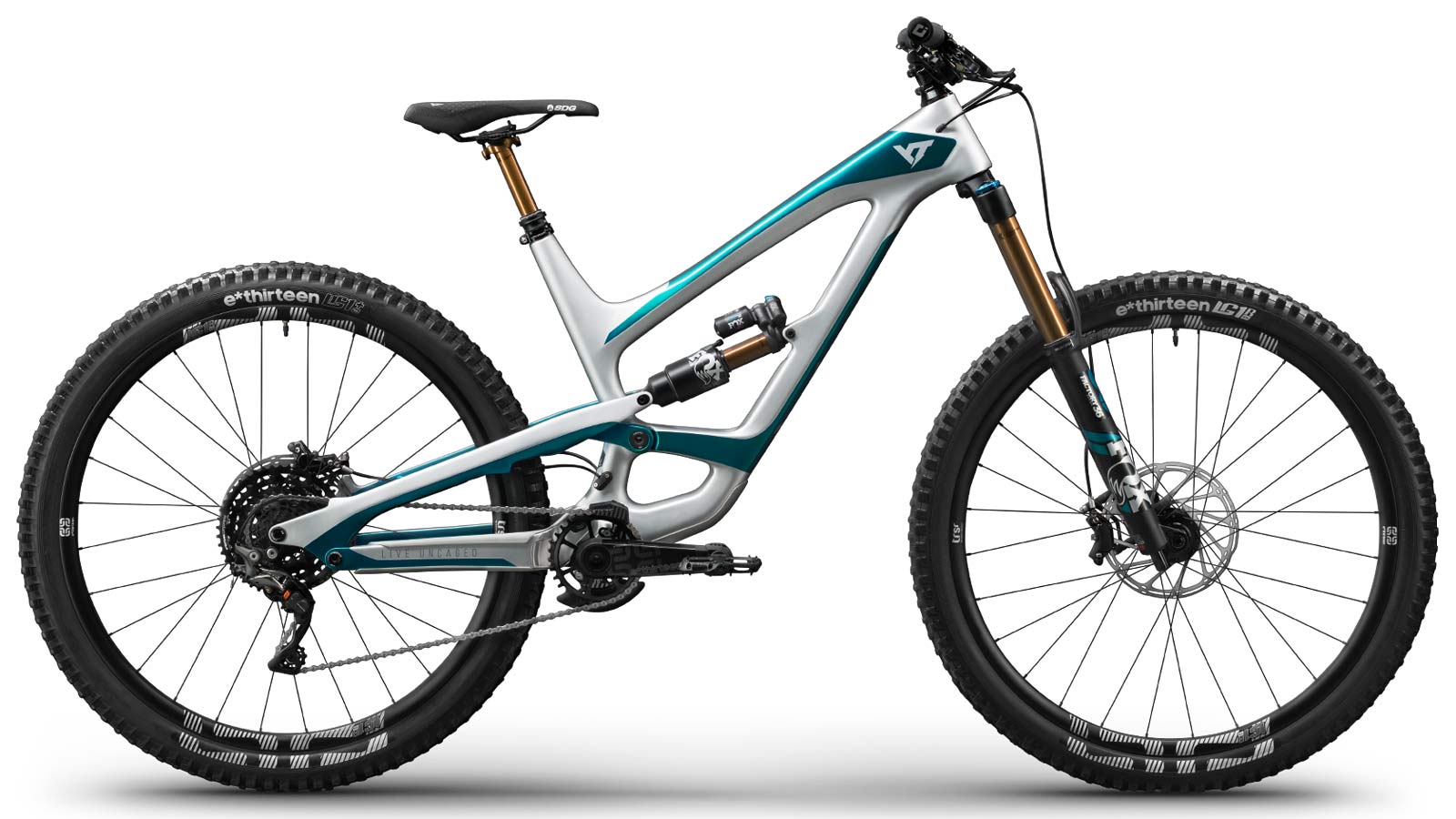 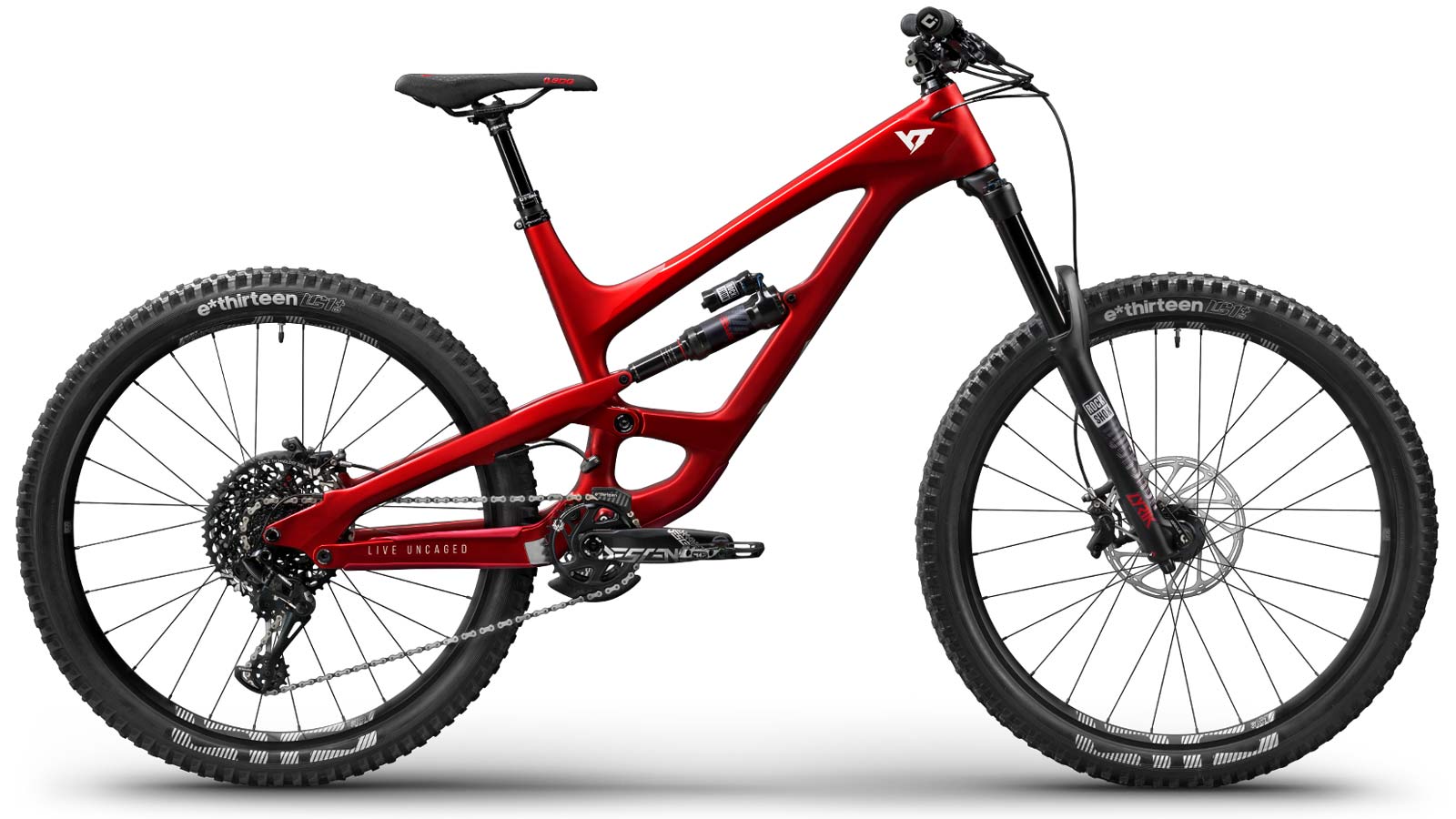 One step down still in carbon and saving money for the Europeans while going up a hundred bucks in the states, the $4400 / 4000€ Capra CF Pro opts for RockShox suspension and switches it up to a complete SRAM Eagle 1×12 drivetrain. It also gets Code RS brakes and alloy LG1+ to match its e*thirteen chainguide. 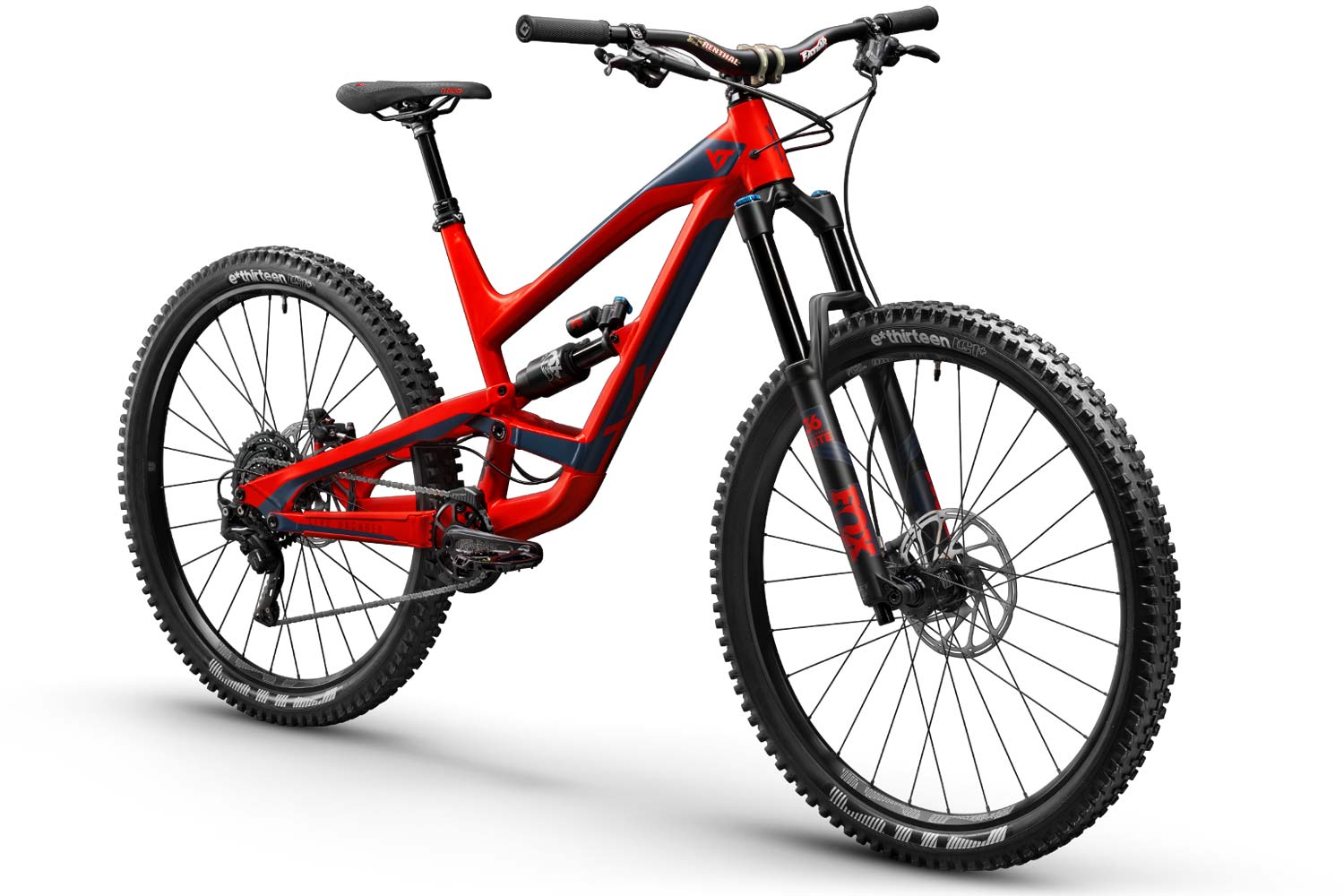 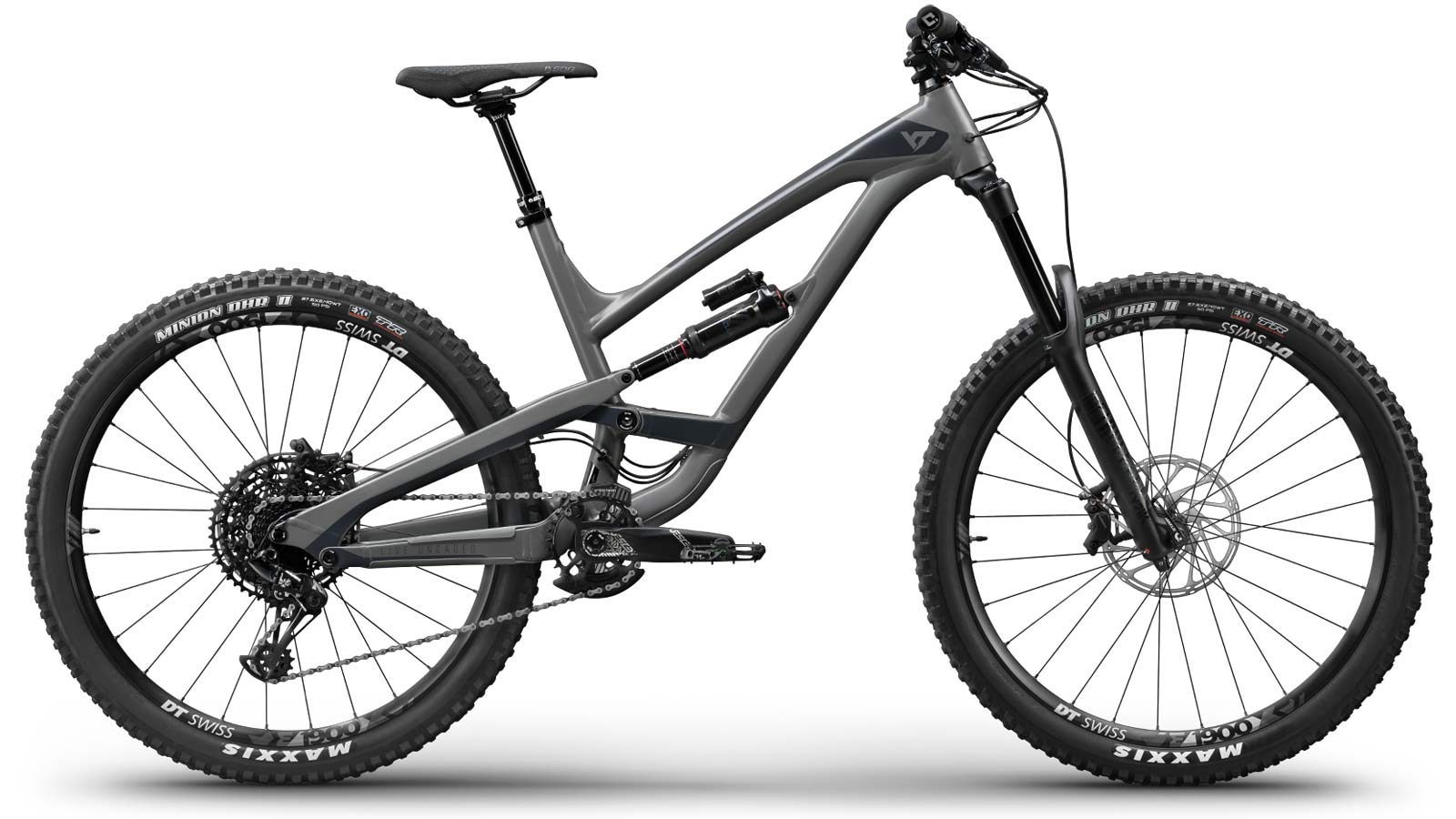 The $2600 / 2500€ Capra AL Base then goes RockShox with a complete SRAM NX Eagle drivetrain and DT alloy wheels. 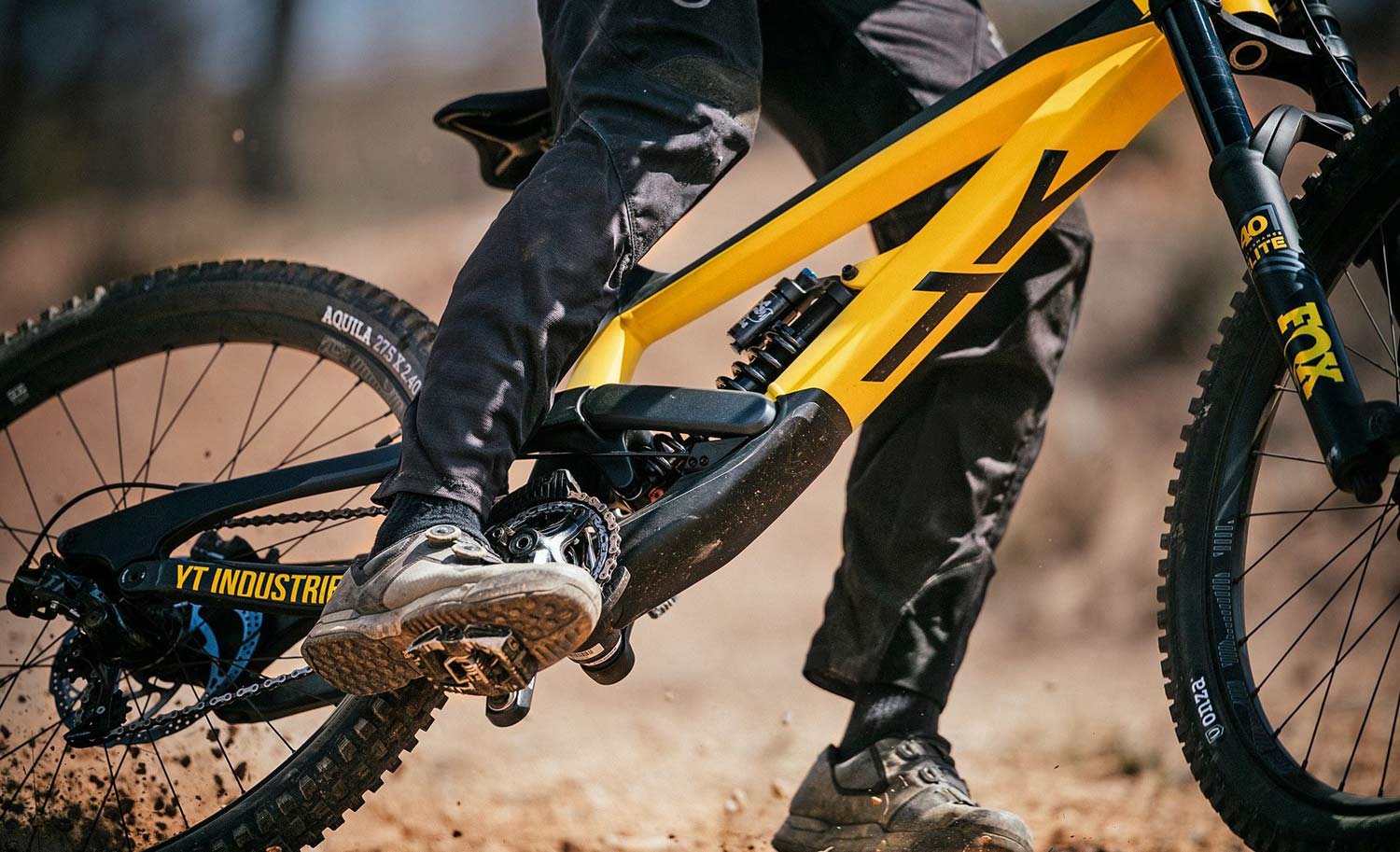 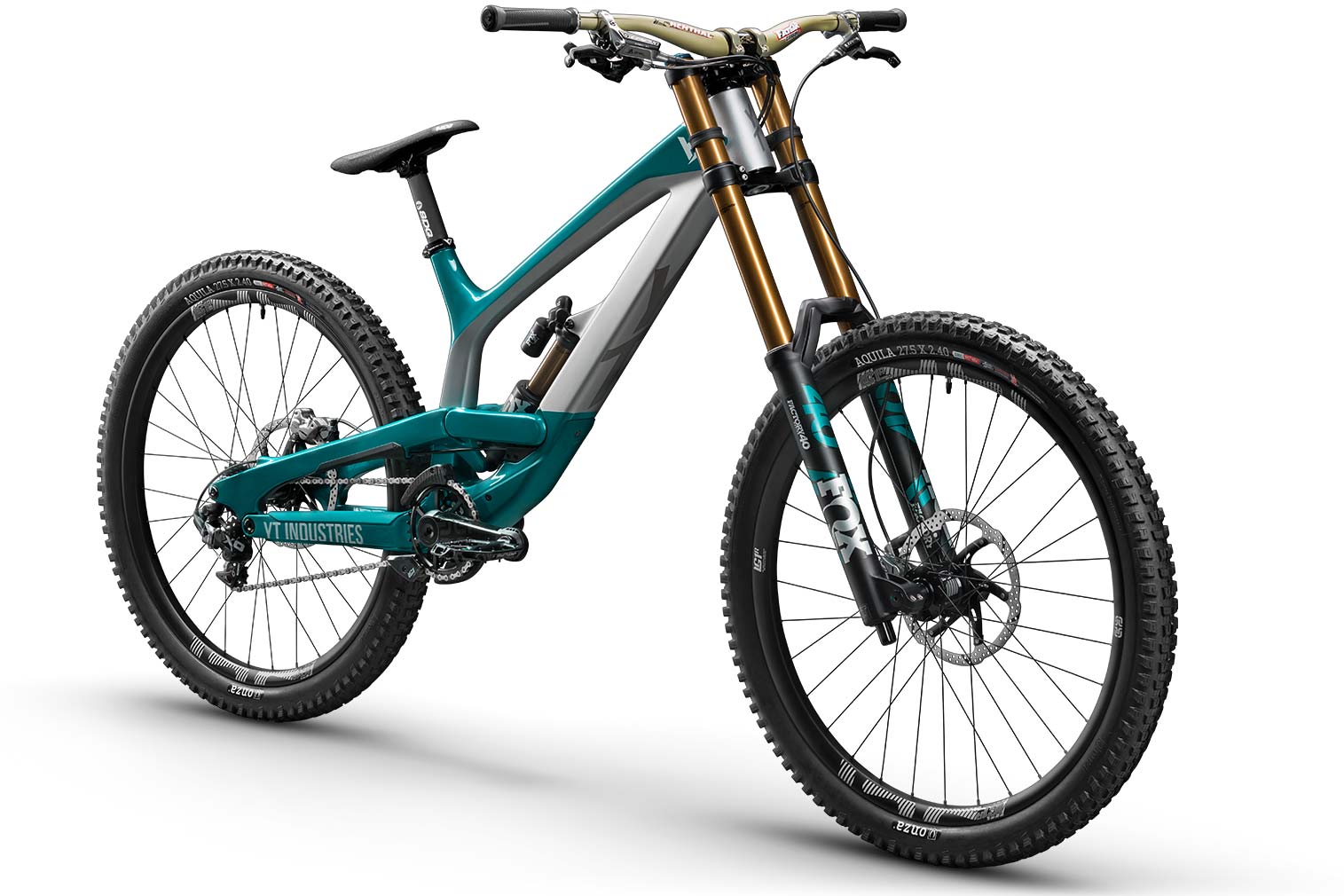 Obviously a solid DH race bike, the YT Mob team also took the bike to last year’s Red Bull Rampage to cement its trail cred as a freeride bike too. Like the Capra, for 2019 the Tues gets two carbon complete bike builds and two in alloy – all with 27.5″ wheels, 200mm of four-bar travel & five frame sizes (S-XXL). 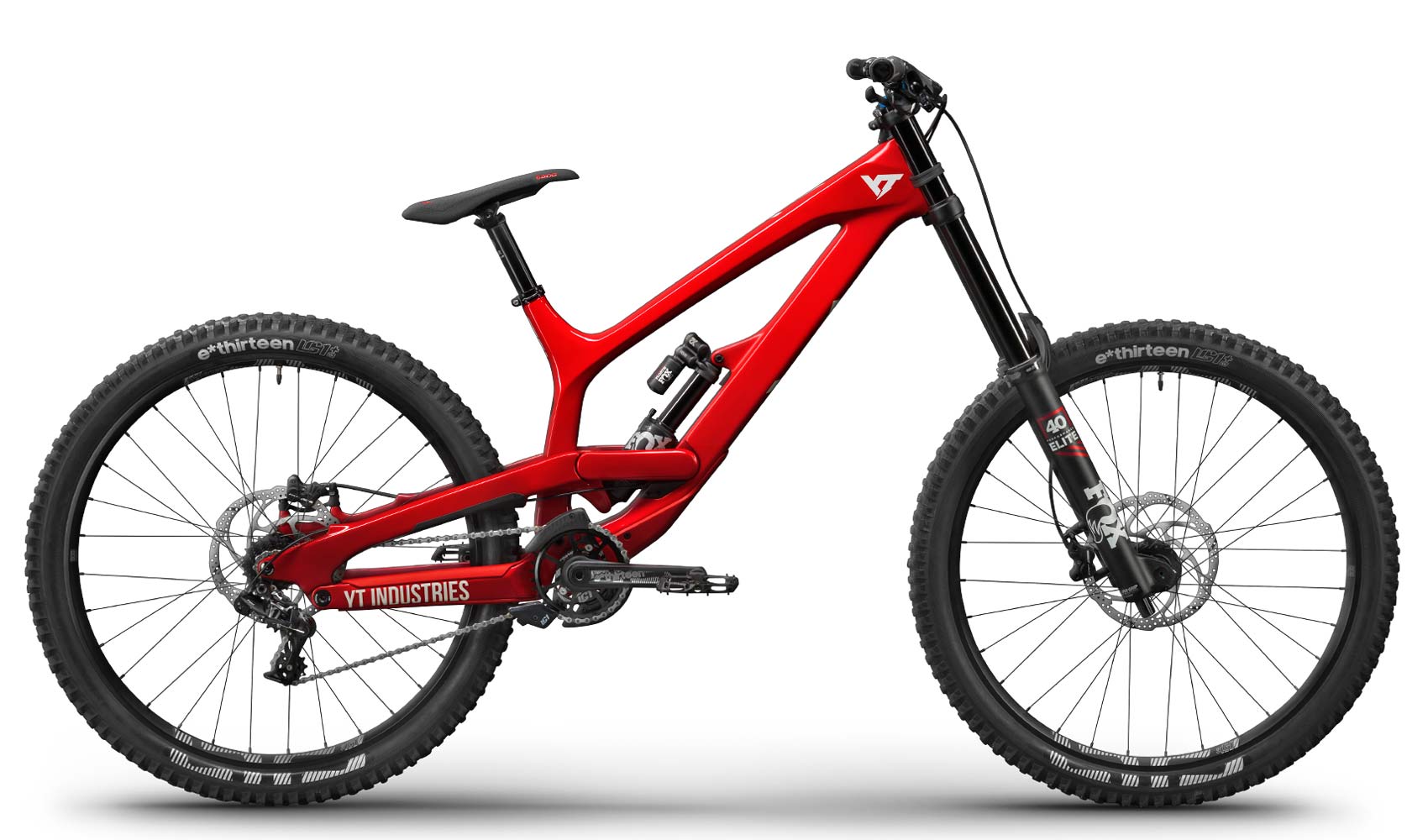 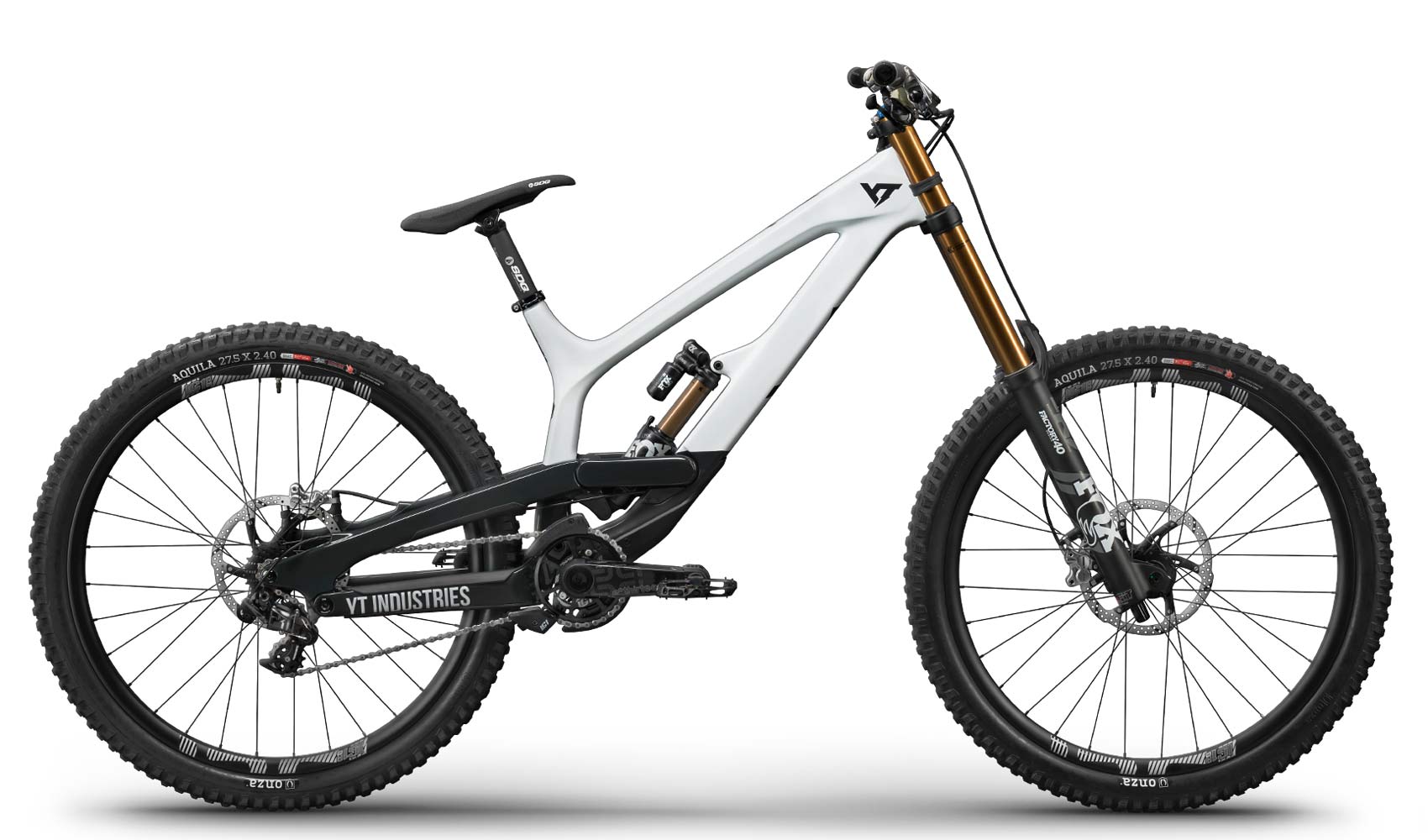 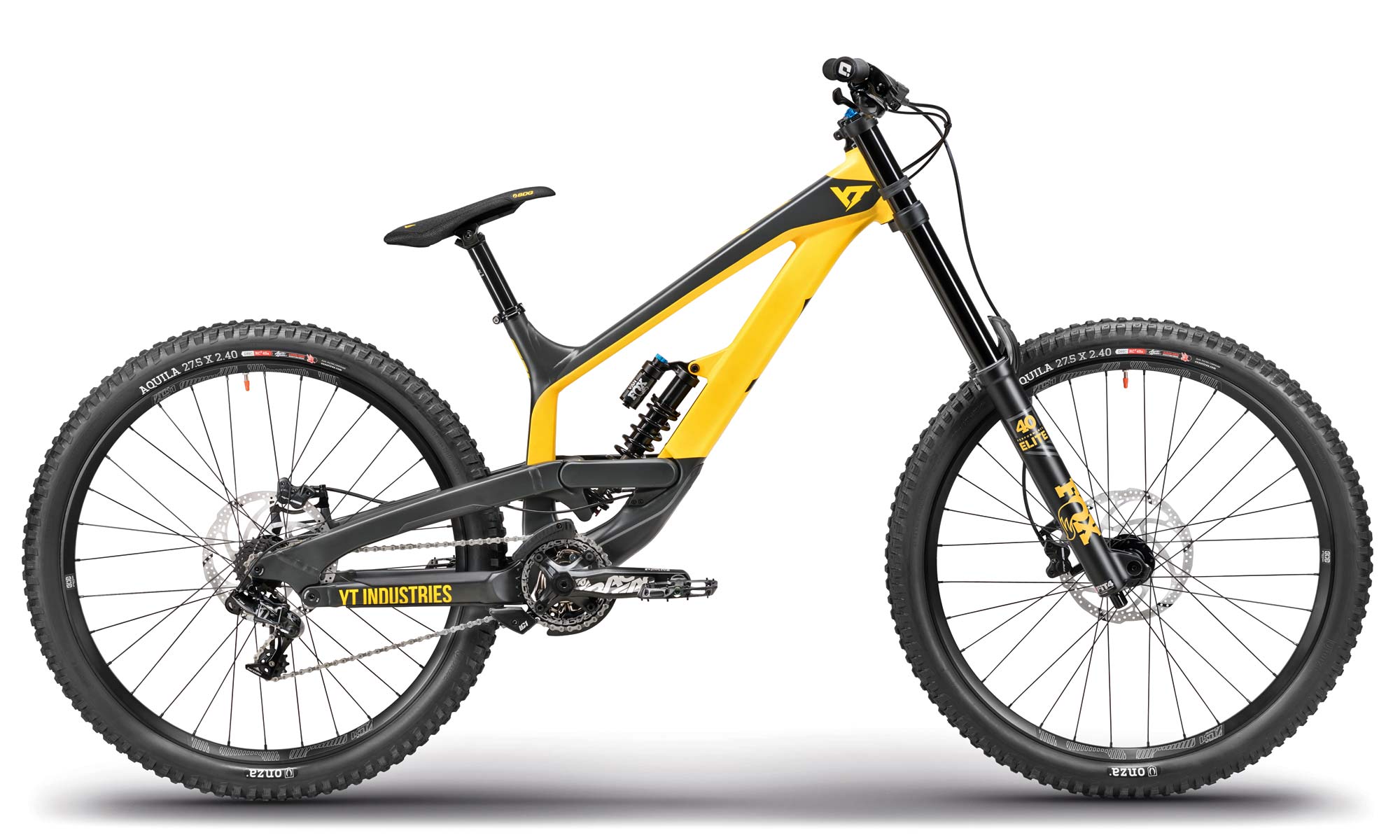 On the alloy front, the Tues 27 AL looks to get almost the same Fox 40 Float/Van Performance suspension and GX DH drivetrain, but comes in with quite a bit higher price at $3300 / 3000€ in both markets. 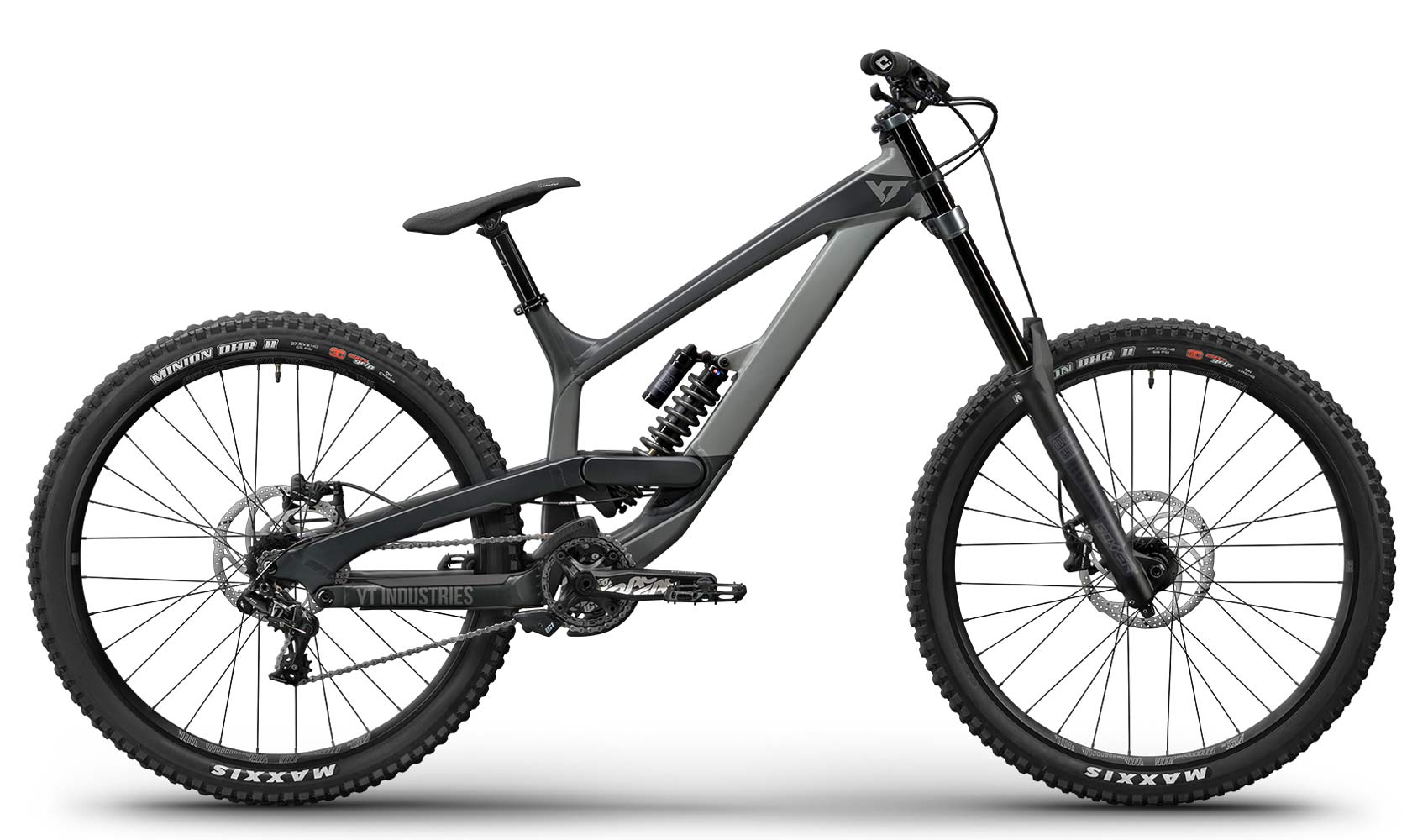 Don’t fret though if you are looking for a budget freeride or privateer DH bike, the new Tues 27 AL Base switches to RockShox suspension and an otherwise similar spec to drop the price down to $2900 / 2500€, +/- what the entry alloy bike was last fall. 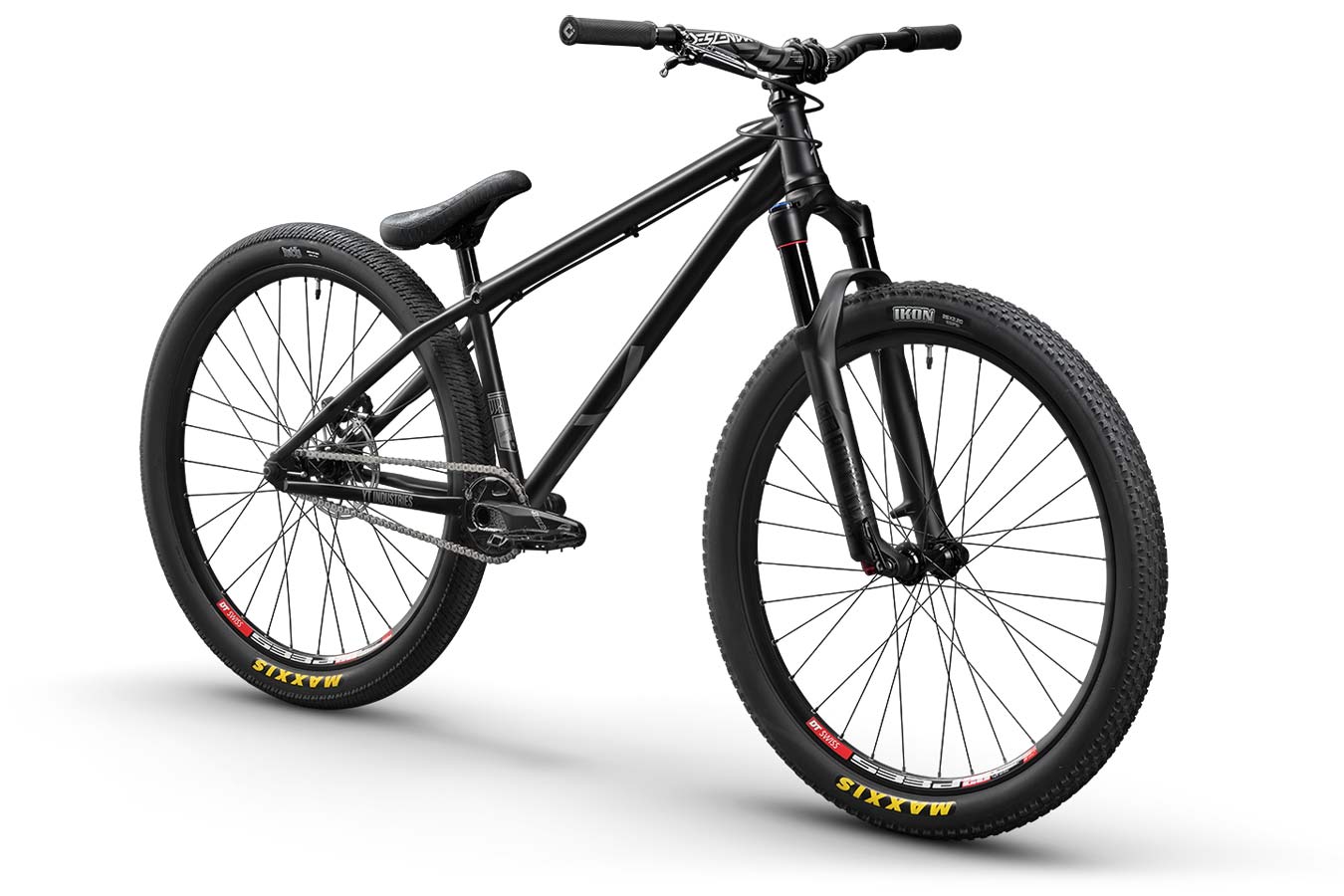 YT started celebrating ten years of building bikes last January with a reissue of the Dirt Love, a modern 26″ steel dirtjumper that evolved quite a long way since it was the brand’s first model. Apparently there was a lot of love for an indestructible steel bike to toss around in the air, so the bike is back in 2019 with an extra size. 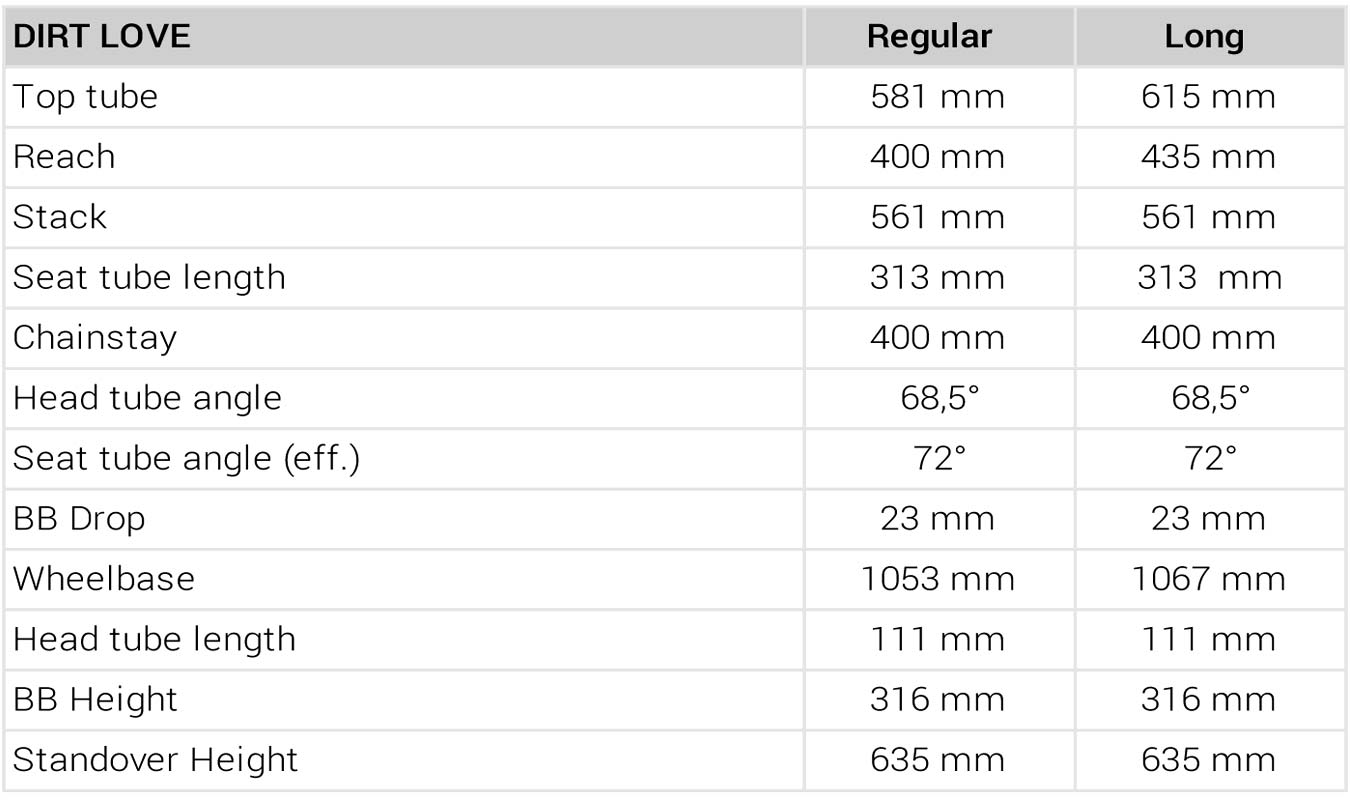 That should be welcome news for taller riders who like to play with dirt or want to take this thing to the streets. 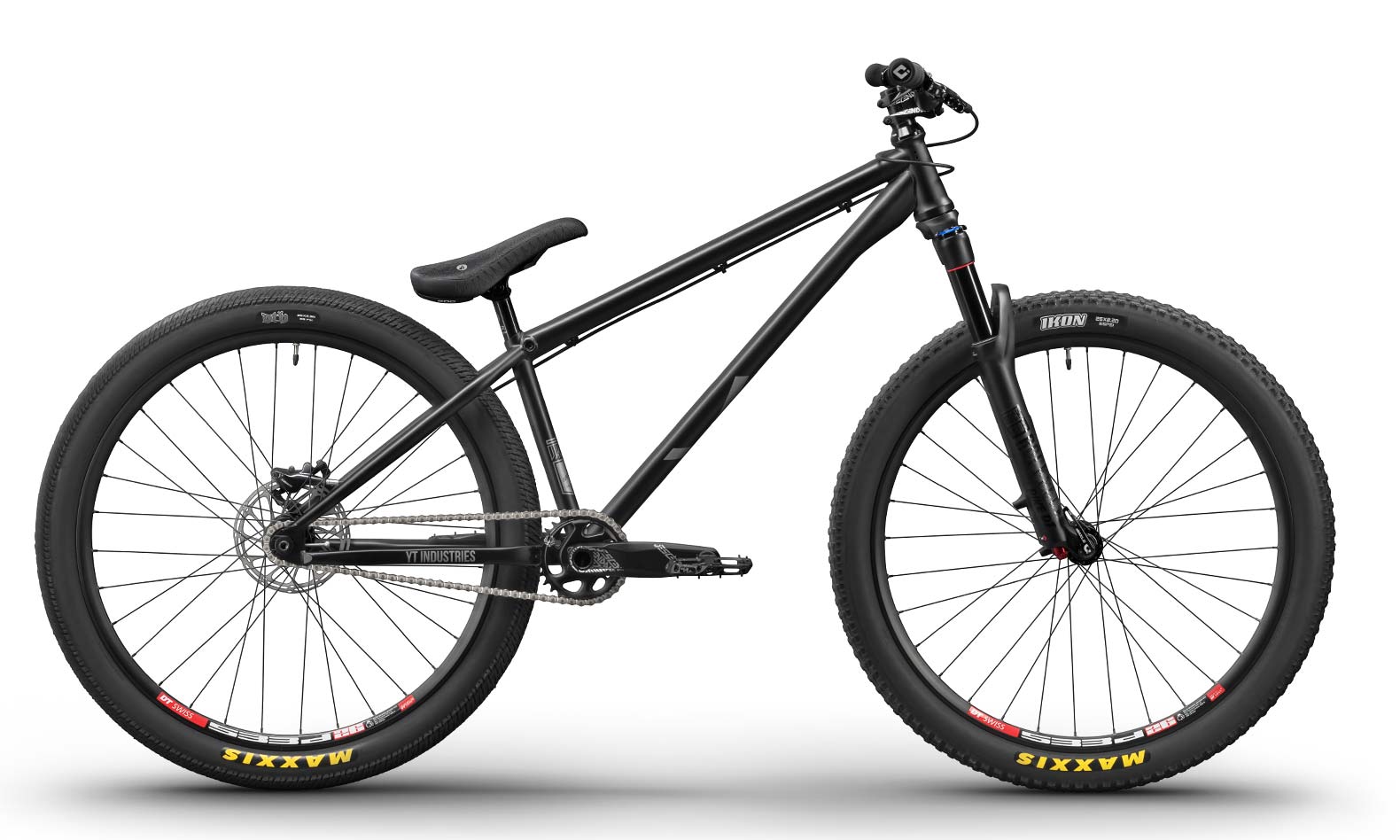 Now pick from regular or long geometry for the $1500 / 1300€ singlespeed hardtail. It still gets a 100mm RockShox Pike DJ 26 fork with a custom tuned Charger damper & Solo Air spring, plus a lightweight but burly alloy finishing kit with super strong DT wheels.

All of the new bikes are available now direct from YT…

No updates on the Jeffsy, or is that news for another day?

A new Jeffsy is expected around Q2 2019, but for the moment YT are still selling the old version with a 2019 paint job.

Website still only show 2018 paint schemes. Glad I didn’t wait any longer, held out for a Jeffsy 29 Cf for like 6 months “sold out”…for half a year!!!! Thanks for having bikes in stock Santa Cruz

i
Reply to  Chris Armstrong

I’m sure if YT raised their prices to Santa Cruz levels, they’d have plenty in stock.

What’s the point of getting affordable when you can’t get hold of it? My local distributor in Singapore don’t even reply of enquiry!