Merida’s full-suspension Ninety-Six World Cup cross-country race mountain bike gets a complete refresh for 2021, evolved to transition to both more technical XC racing and more capable than ever as a singletrack shredding trail bike – yet more sleekly integrated and lighter than ever.

After years of success under the old Multivan-Merida race teams under mountain bike icons like Gunn-Rita Dahle Flesjå & José Antonio Hermida, Merida has refocused their short travel full-suspension bike for more fun, all-day versatility, and speed when the trails get rough.

Taking the twelve-year-old Merida Ninety-Six XC bike back to the drawing board, an all-new lightweight carbon 29er has evolved with the same successful split personality we’ve seen from a number of modern cross-country race bikes. Stick with XC racer mode & the lightest CF5 1695g carbon frameset, and you get modern race geometry with 100mm travel front & rear to take on the UCI World Cup. Or opt for Trail mode with the CF4 1845g carbon frame & add a 120mm fork up front, then geometry slackens ever more to build out a more technically capable bike for longer, tougher marathon racing or singletrack adventures. Starting off with the new lighter Ninety-Six’s carbon frame, Merida has created a cleaner, more streamlined design. The new frame uses thinner tube shaping across the top of the bike, eliminating the rear pivot above the dropout to rely on seatstay flex (called P-Flex) for added simplicity. Dropping the toptube a bit provides more standover clearance (together with a 5mm lower BB height), and doing the same with the downtube makes room for two sets of bottle cage mounts inside the main triangle. 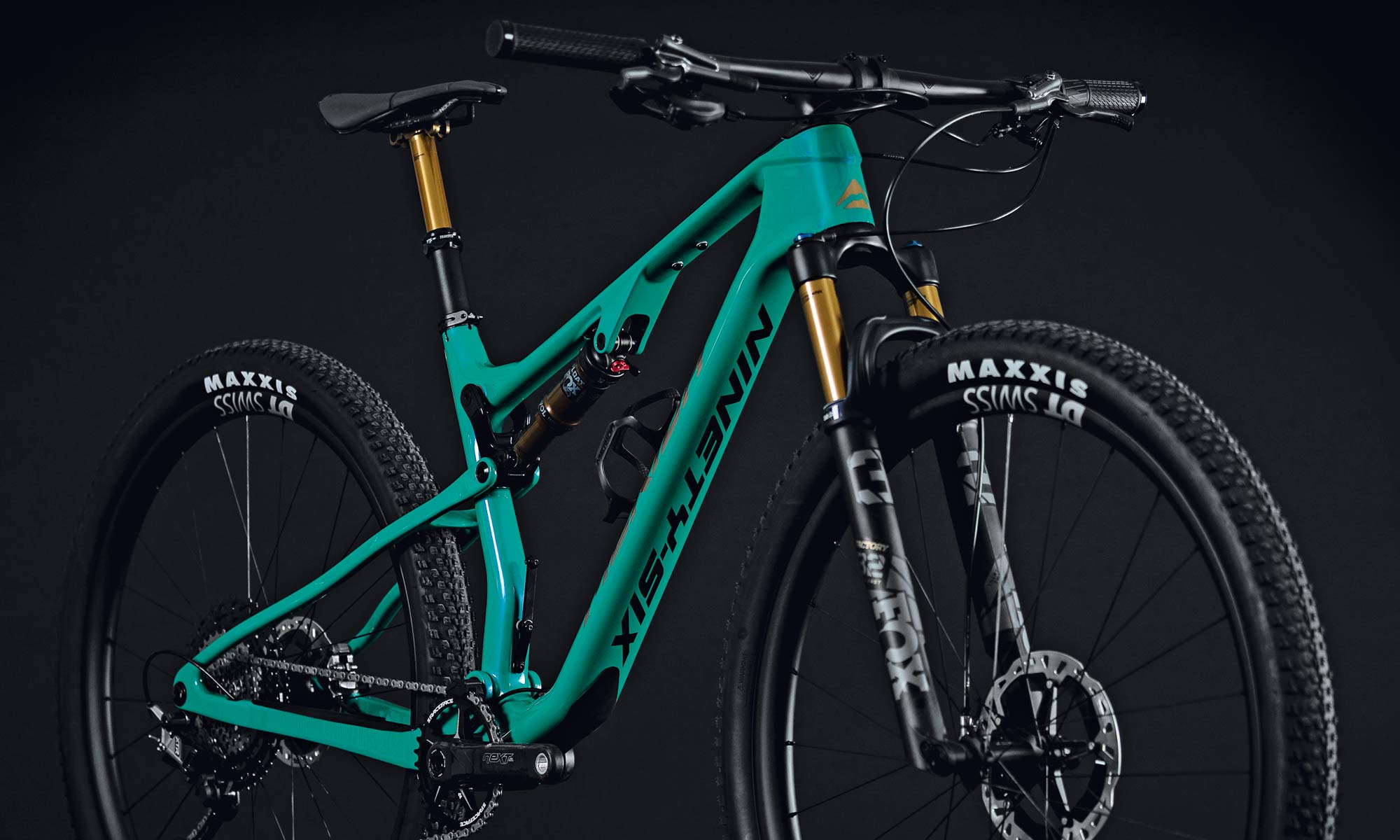 The overall suspension layout remains mostly unchanged, save a revised shorter rocker link driving the horizontal shock. Leverage ratio is however updated in the new design, with more progression and a higher initial leverage ratio to better pair with modern lightweight air shocks. With revised single-pivot kinematics optimized for the 1x drivetrains, the new Merida Ninety-Six promises early small bump sensitivity and solid mi-travel support. And finally the new bike leaves behind any vestige of a front derailleur behind. Incorporating the latest internal routing through the headset gives a more simplified look with tidy internal cable routing, even for the dropper post. Yet it also keeps an external port for a rear shock remote, and accessory mounts in front of the shock. Cable routing through the rear end of the bike also gets updated, tucking over the BB and into the chainstays for a cleaner, more protected setup. The redesigned 10mm wide chainstay puts the cable in the reinforced, solid carbon lower third of the stay to maintain strength & durability in a compact setup. Geometry-wise the 2021 Merida Ninety-Six is also all-new. Coming from its XC racing heritage where climbing efficiency seemed to be the priority, this new 29er now wants to race downhill too.

In XC mode the head angle slackens 1.5° more than before to 68.5°, while shifting to trail builds takes that even further to 67°. Seattube angles also steepen to maintain climbing ability, up 1.5-2° on the XC builds while the Trail bikes are +0.5° or stay the same as before.

Overall fit also goes down the path of modern trail bikes, with frame Reach growing by about 25mm across all sizes. Stack heights actually come down by about 5mm, with another 5mm extra bottom bracket drop, both boosting stability with lower center of gravity. That will also help smaller riders get their bars lower, while always allowing higher cockpit positions, as well.

For now only four models of the new Ninety-Six are being offered – three designated RC for their Race Cross-country mode and one for trail – all offered in one colorful & one black paint scheme per model. All of the bikes are available to pre-order through your local Merida dealer now, with deliveries expect soon.