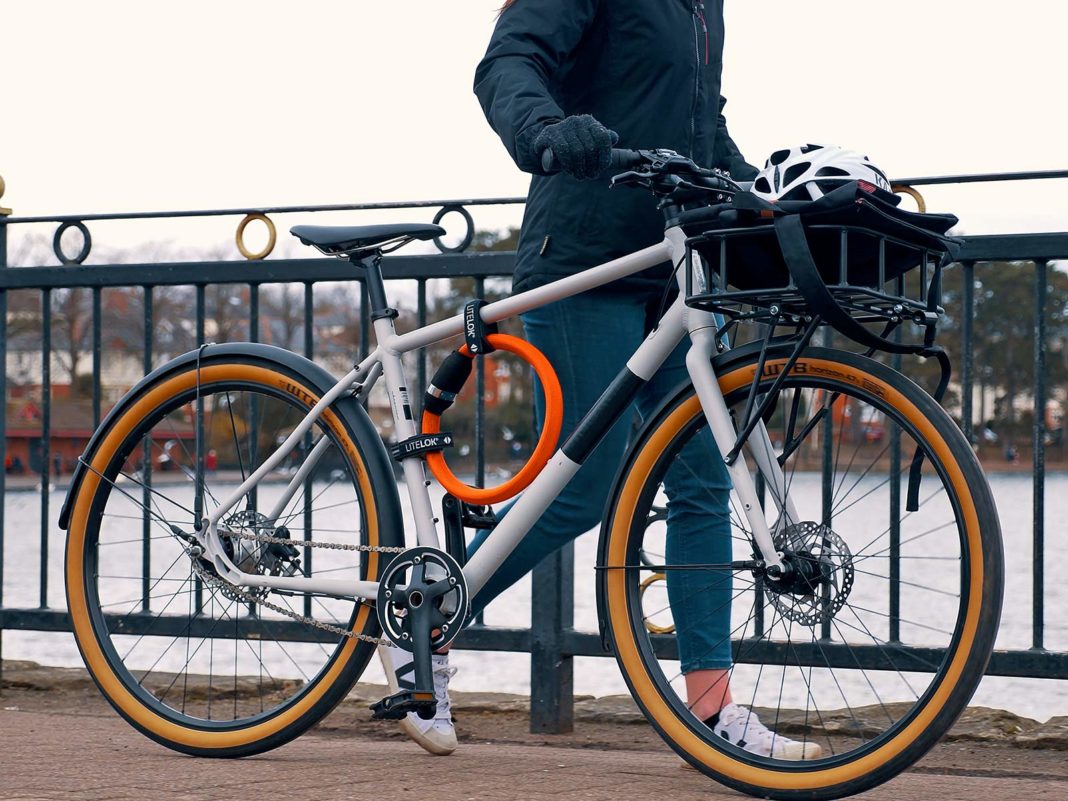 Litelok’s new Core bike lock continues their run of producing the lightest locks in their class. Now getting a big city ready Sold Secure Bicycle Diamond rating, the wearable Litelok Core offers top-tier anti-theft protection at less than half the weight of equally secure hardened chain+U-lock combos. No bike lock is indestructible, but Litelok’s flexible, multiple material construction does a great job of delivering a lock that offers proven security without feeling like you are hauling around a boat anchor…

Litelok Core was designed for use in urban areas with the highest risk of theft, singling out New York, Paris, and London as the epicenters of rampant urban bike theft. The Welsh-made lock’s security is even rated high-enough that it is recommended for motorcycles too.

If you are looking to compare it with other familiar bike locks, only Kryptonite’s heavy-duty Fahgettaboudit chains & U-locks get Diamond rating, or Abus’ top hardened U-lock.

The heart of Litelok Core is the next iteration of Litelok’s basic mixed-material, layered construction concept – here, called Boaflexicore Plus. Litelok is always a bit protective of the details of their uniquely flexible proprietary material assembly. But the same concept applies – each layer flexes in sync with the other to maximize useable flexibility, while each material is able to absorb or deflect different types of attempts to defeat or destroy the lock.

At the core of the new lock, Boaflexicore Plus employs what appears to be relatively small 19mm external hardened steel chain links (likely 5-6mm thick?) woven around a multi-filament high-tensile steel cable. Then seals on top of that, a flexible plant-based polymer gets bonded on to provide weatherproofing & corrosion protection. And lastly, an abrasion-resistant woven cover on top. The entire layered assembly is just 24mm (15/16″) thick and flexible, while not compromising ultimate security. 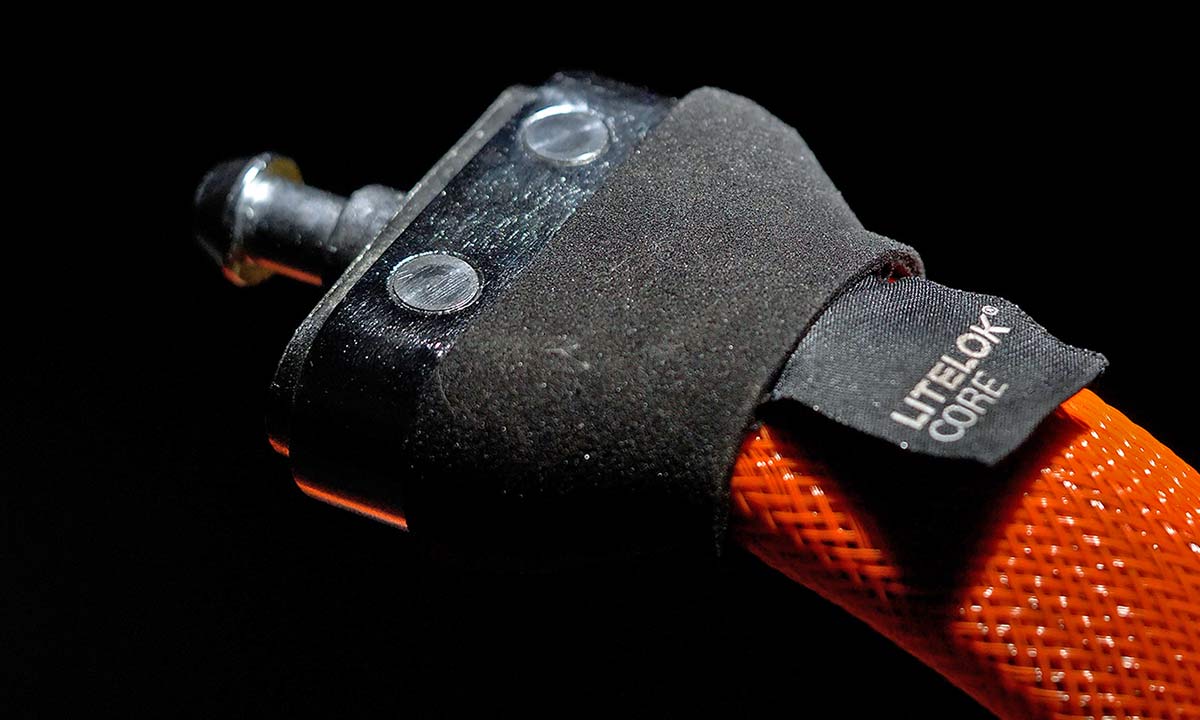 Then, a hardened steel lock body gets attached with marine-grade stainless steel rivets to secure it all, topped off with a pick-resistant disc detainer lock cylinder and resistance for freeze & hammer attacks. 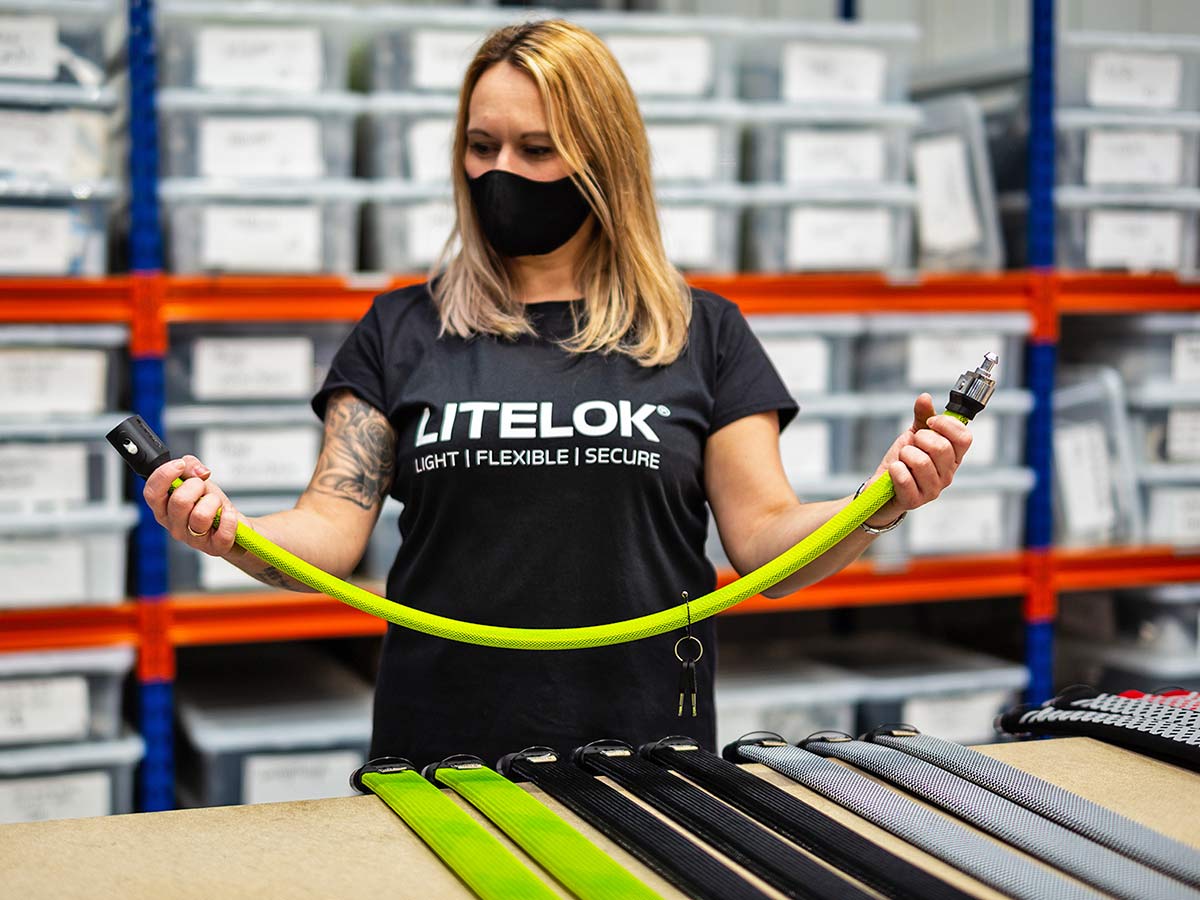 Unlike a stiff U-lock, Litelok Core again relies on its flexible construction to absorb and deflect energy in an attempt to cut, break, or otherwise destroy it. 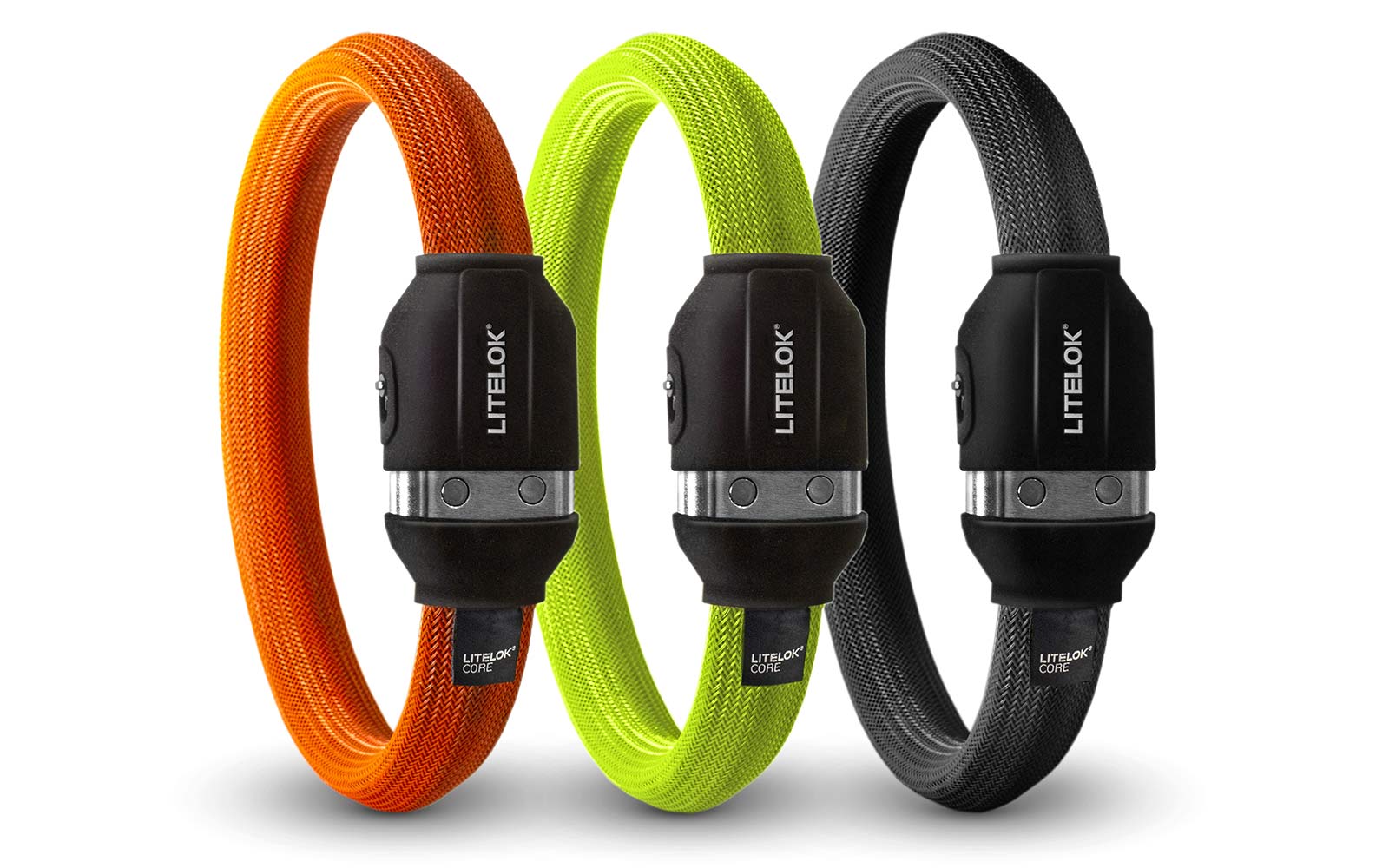 Beyond the security of the made-in-the-UK lock, the key to Litelok Core is usability. Litelok Core is meant to be light, with a claimed weight of 1600g for the shortest 75cm loop. 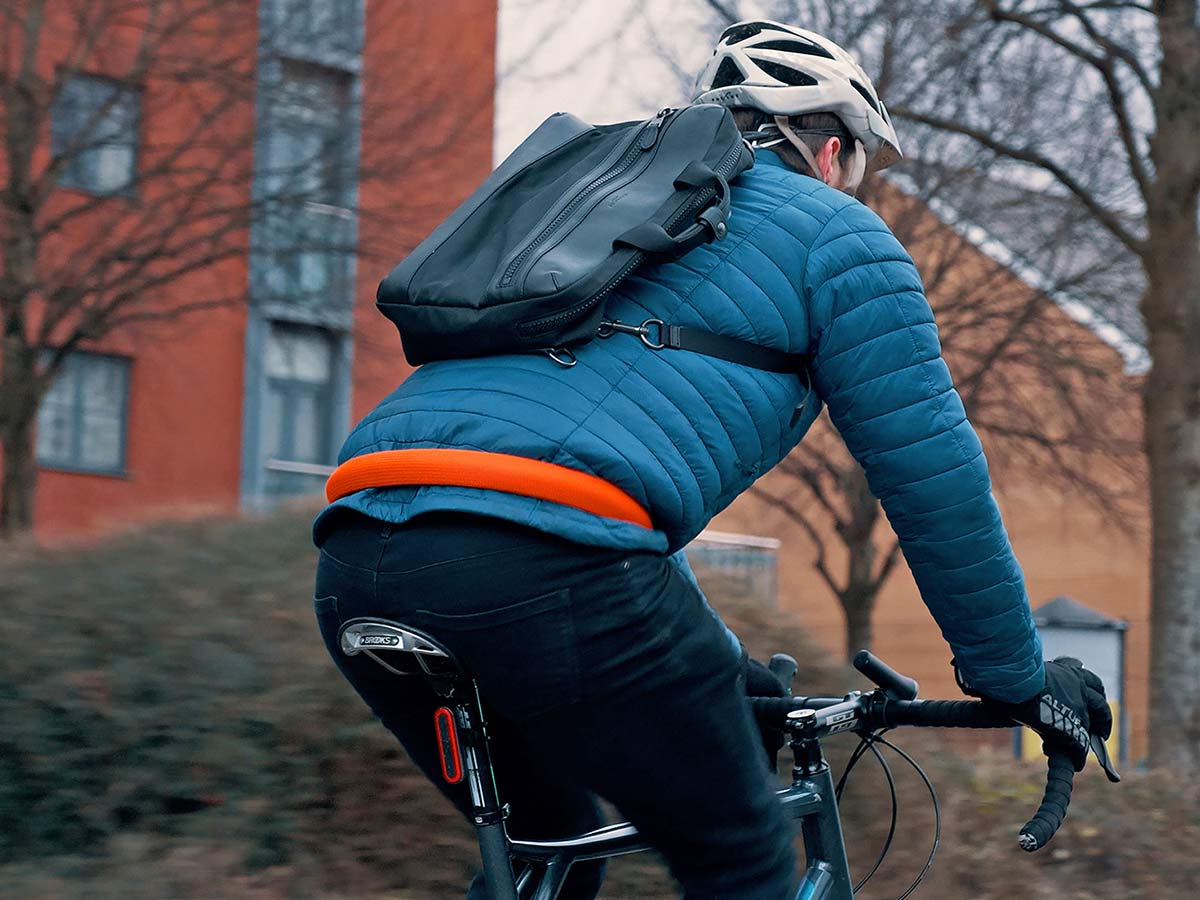 But it also was developed to be wearable, so there are 88cm (1.9kg), 100cm (2kg) & 112cm (2.2kg) loops that are meant to fit around waists of different sizes. An integrated lock stopper plastic(?) tab hooks over the end of the lock, so you can secure it around your waist while riding, without getting locked inside. 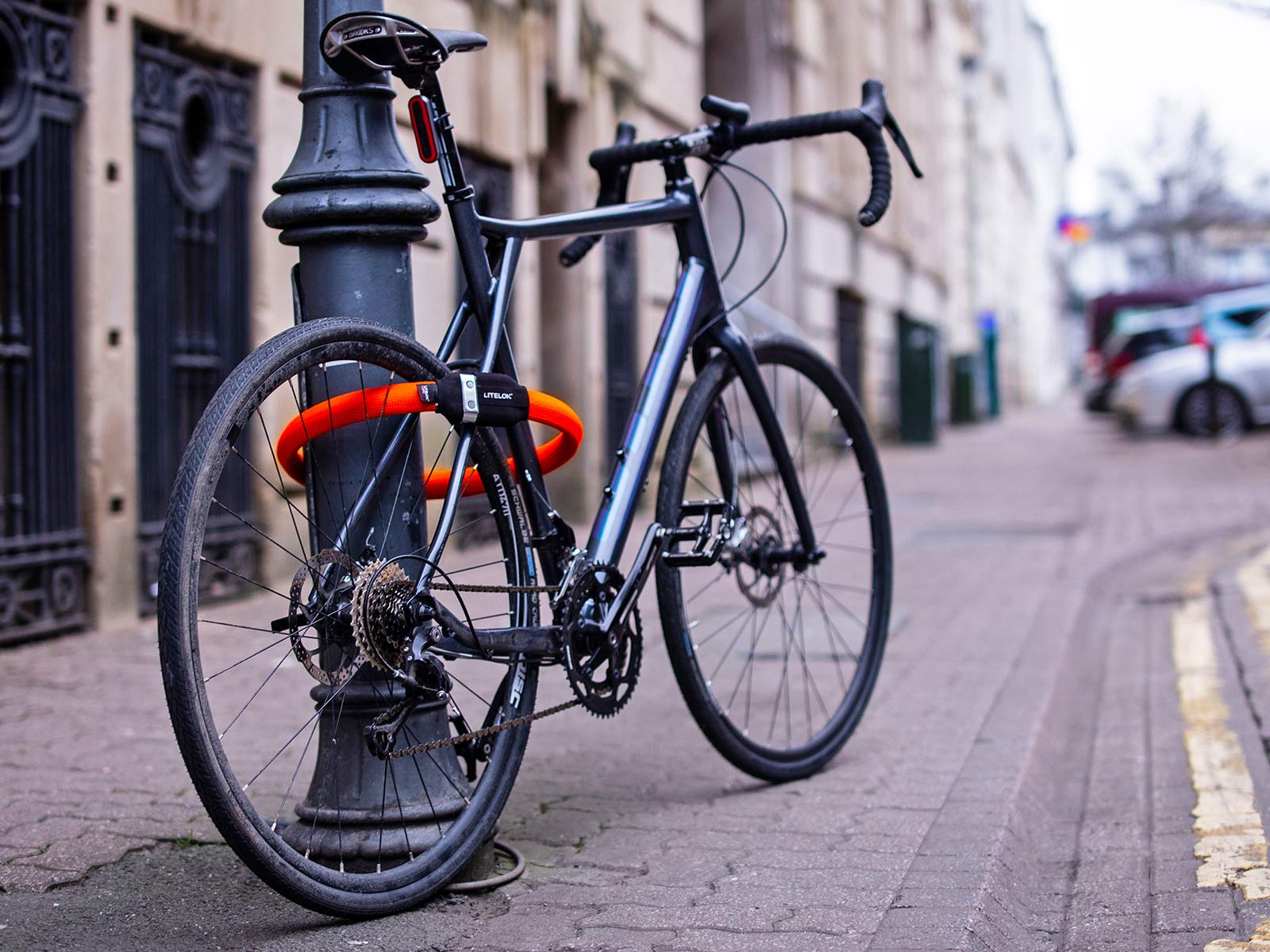 As they have done twice before, Litelok is pre-selling the new Core locks on Kickstarter now for about 30% off the ultimate retail pricing. And it’s already been met its funding goal in the first hours since it went live.

That means you can get a shot at a limited number of Litelok Core locks from £80 (~$110 / 100€) starting today, with delivery slated for about two months from now in May 2021. You get to pick from four bike-specific lengths and three colors, or even a twin pack that shares the same keys and can be daisy-chained together. 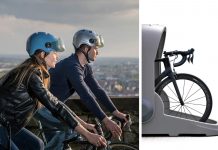