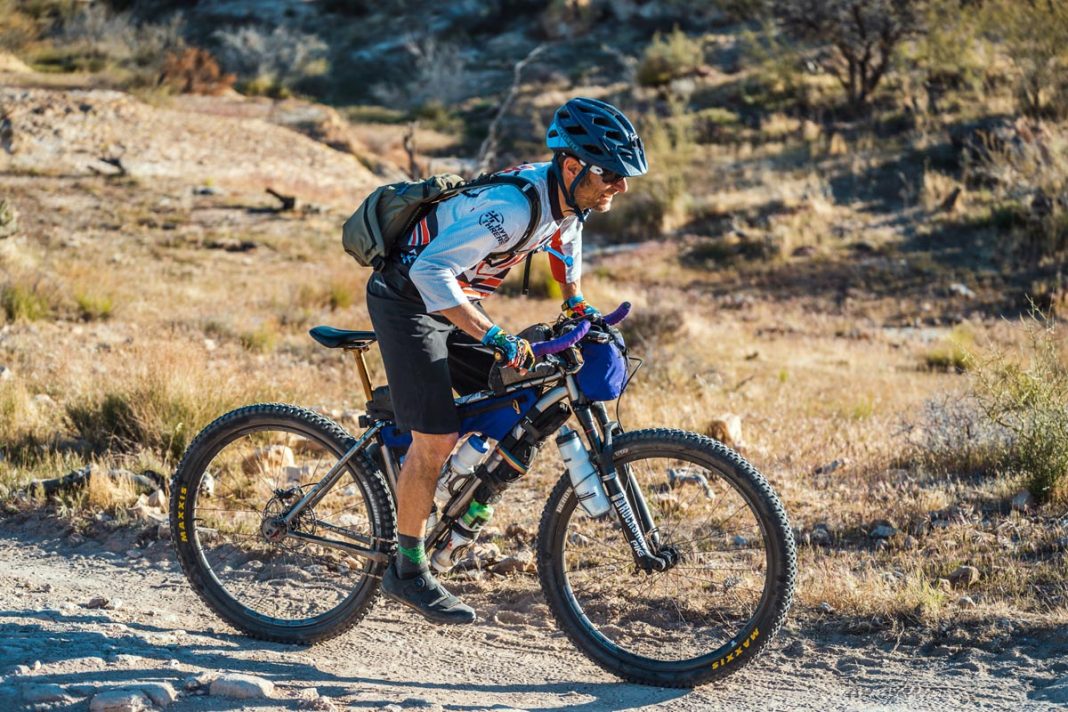 The newest bike from Why Cycles is a bit of a departure from their norm. When the brand launched just under four years ago, Why’s raison d’être was to create the fun loving bikes that their team wanted to ride. They had to be fast, sure, but being race-worthy was low on the list of priorities. 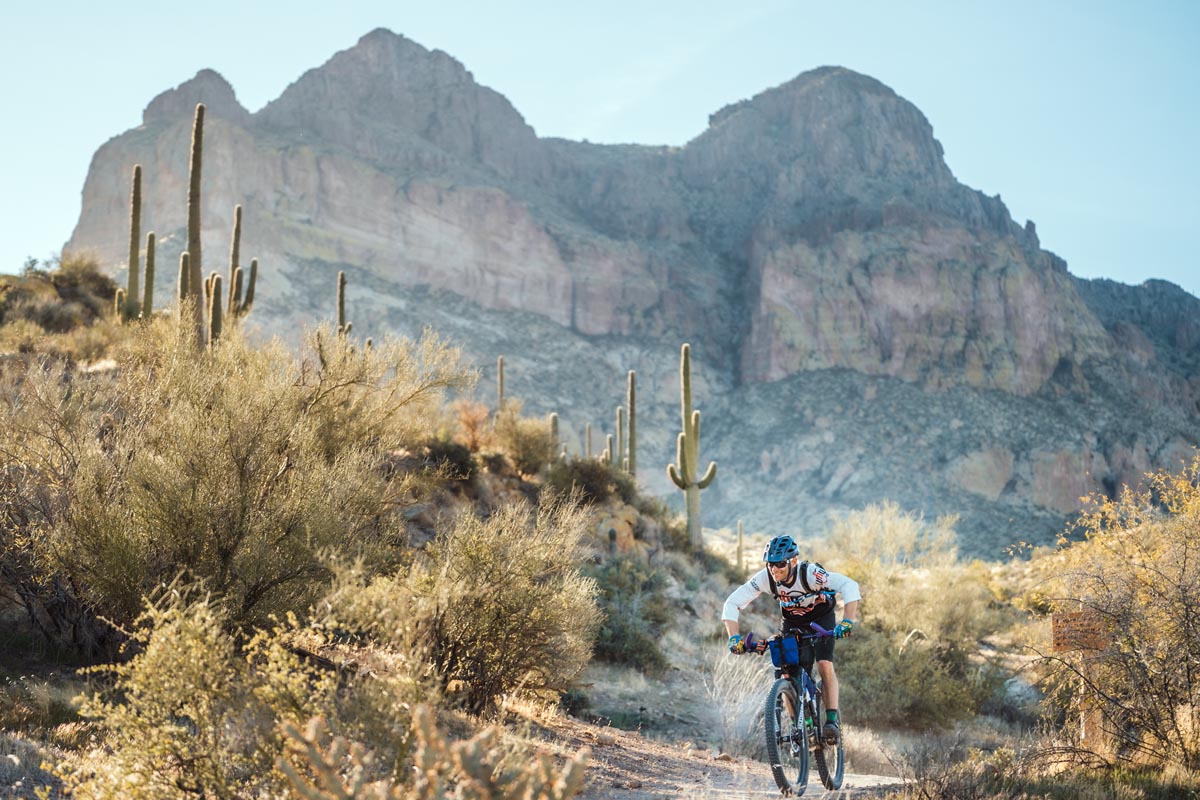 More recently, after Why Cycles relocated to Carbondale, CO, Why has been working with ultra-endurance legend, Jefe Barnham. After two seasons as a team rider for Why, Jefe had a vision for his dream bike for going fast in the backcountry. So Why Cycles made it happen with a new ‘pro model’ called the el Jefe. 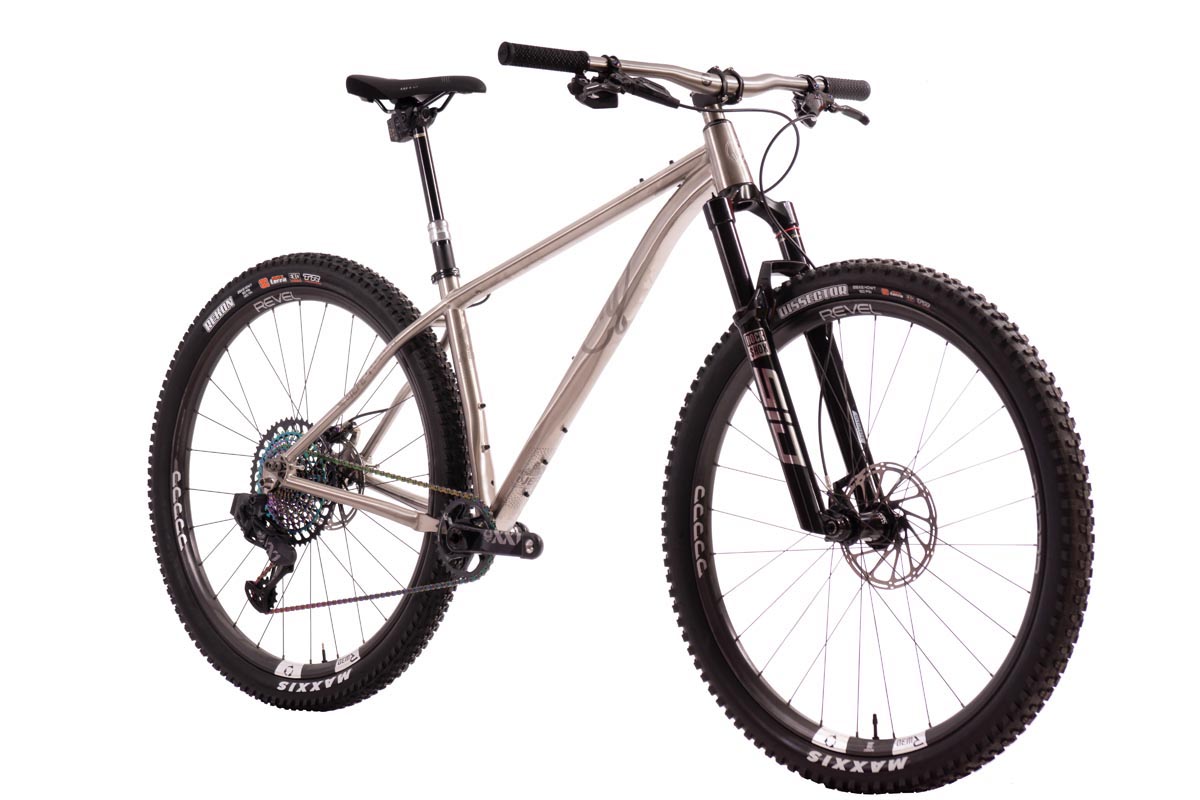 Calling it “more serious and less swoopy” than their S7 hardtail, Why Cycles also says the el Jefe is just as capable as their Wayward in the backcountry. So what makes it different? The frame starts with the same Grade 9 3/2.5v titanium tubing with 6/4 titanium for the head tube, threaded bottom bracket shell, and machined pieces, but this time it does away with the belt drive split. 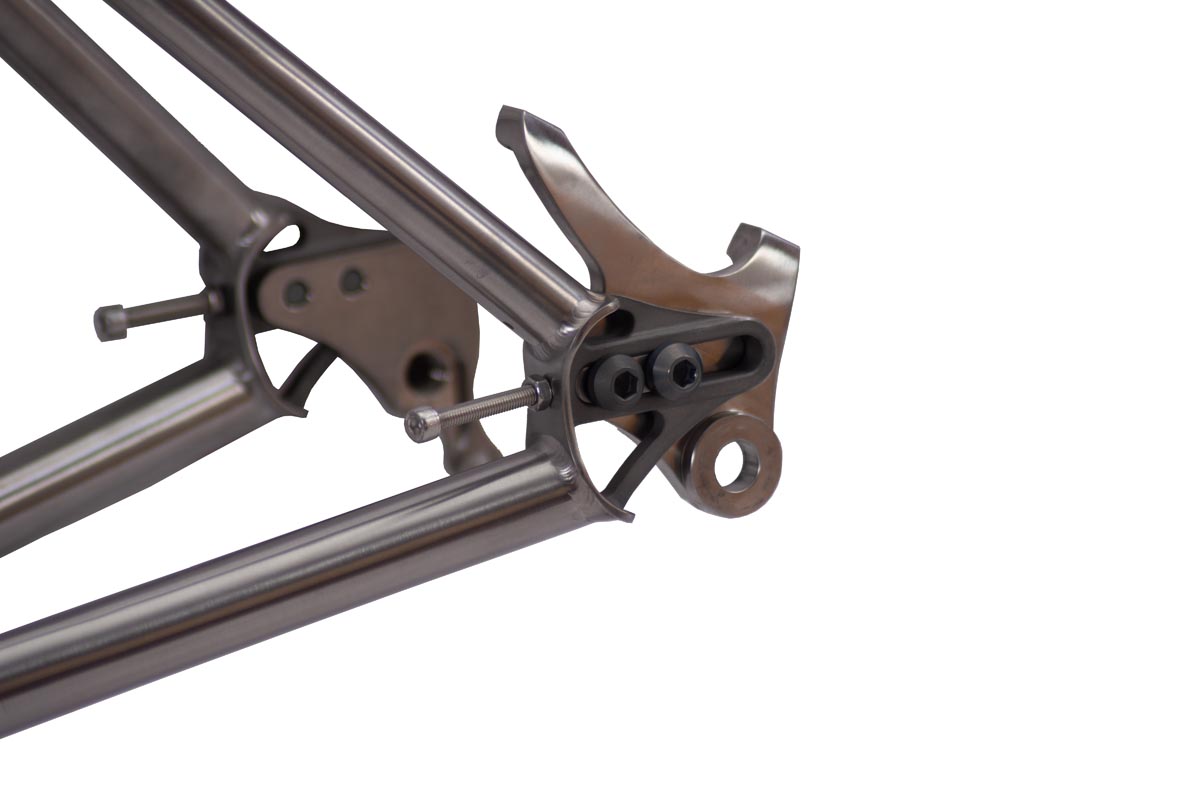 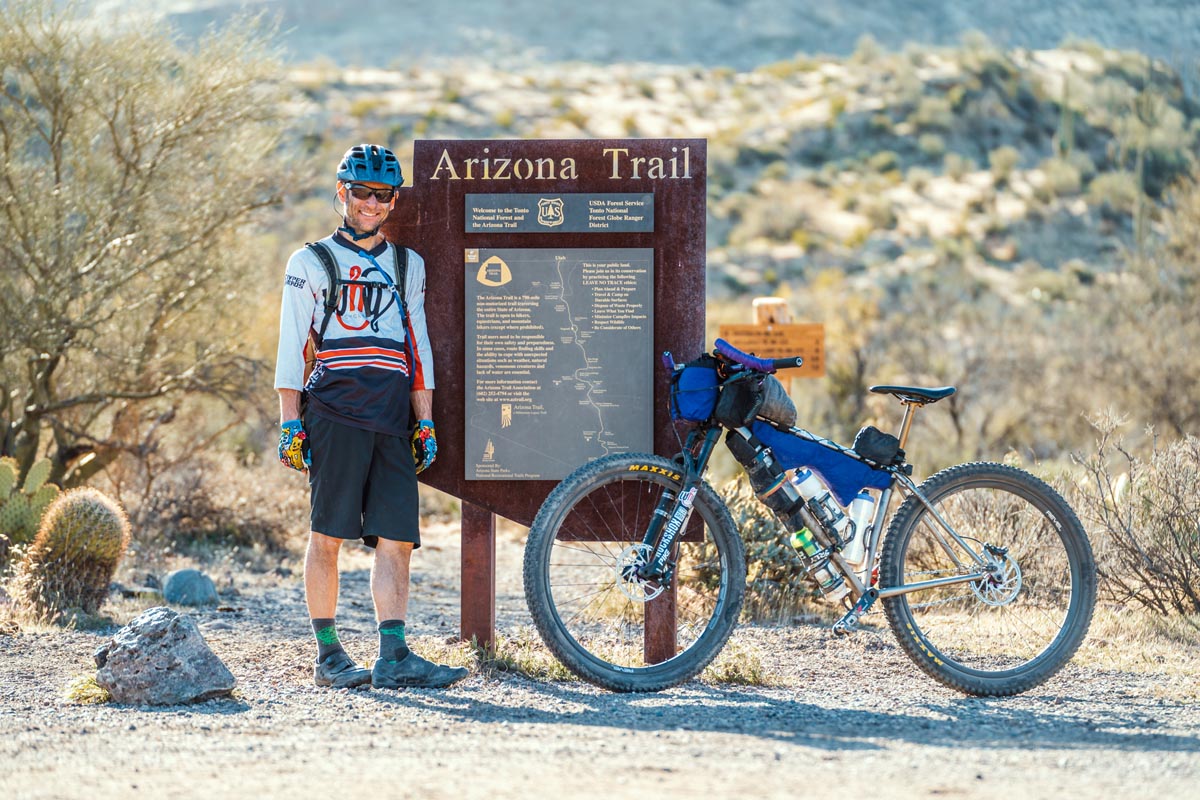 The frame is still single speed compatible though, proven by Jefe’s recent fastest known time for a single speed attempt of the Arizona Trail 300. Those sliding dropouts allow for a chainstay length of 420-435mm with clearance for 29 x 2.6″ tires and plenty of mud clearance. 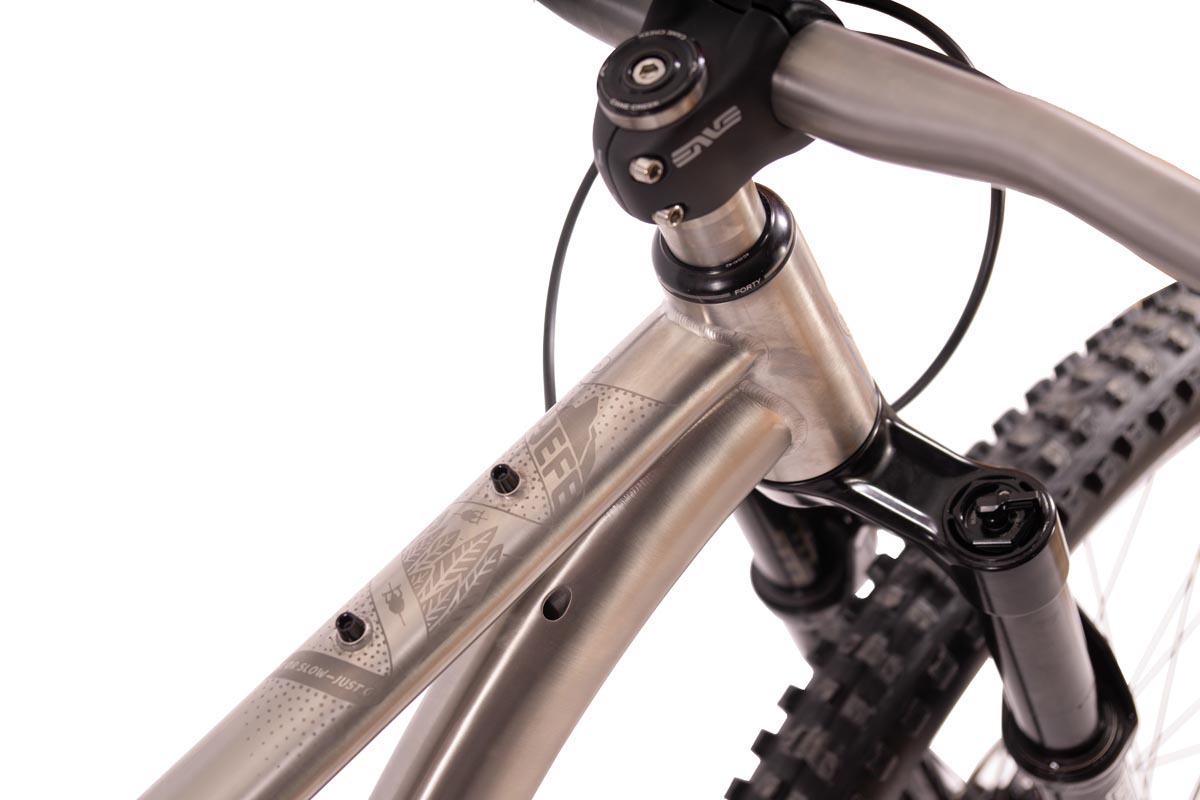 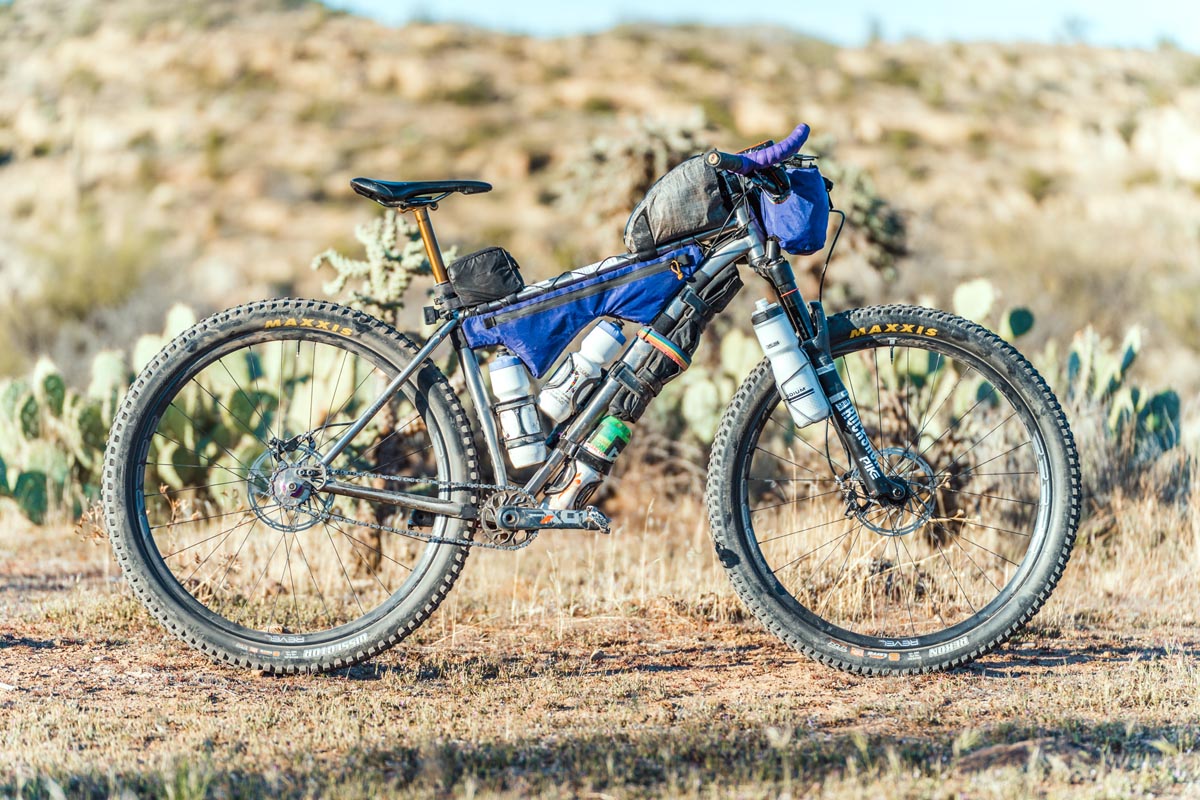 There are a number of accessory mounts on the frame to tackle endurance events, or you can go fully self supported like Jefe and max it out with bags and cages. 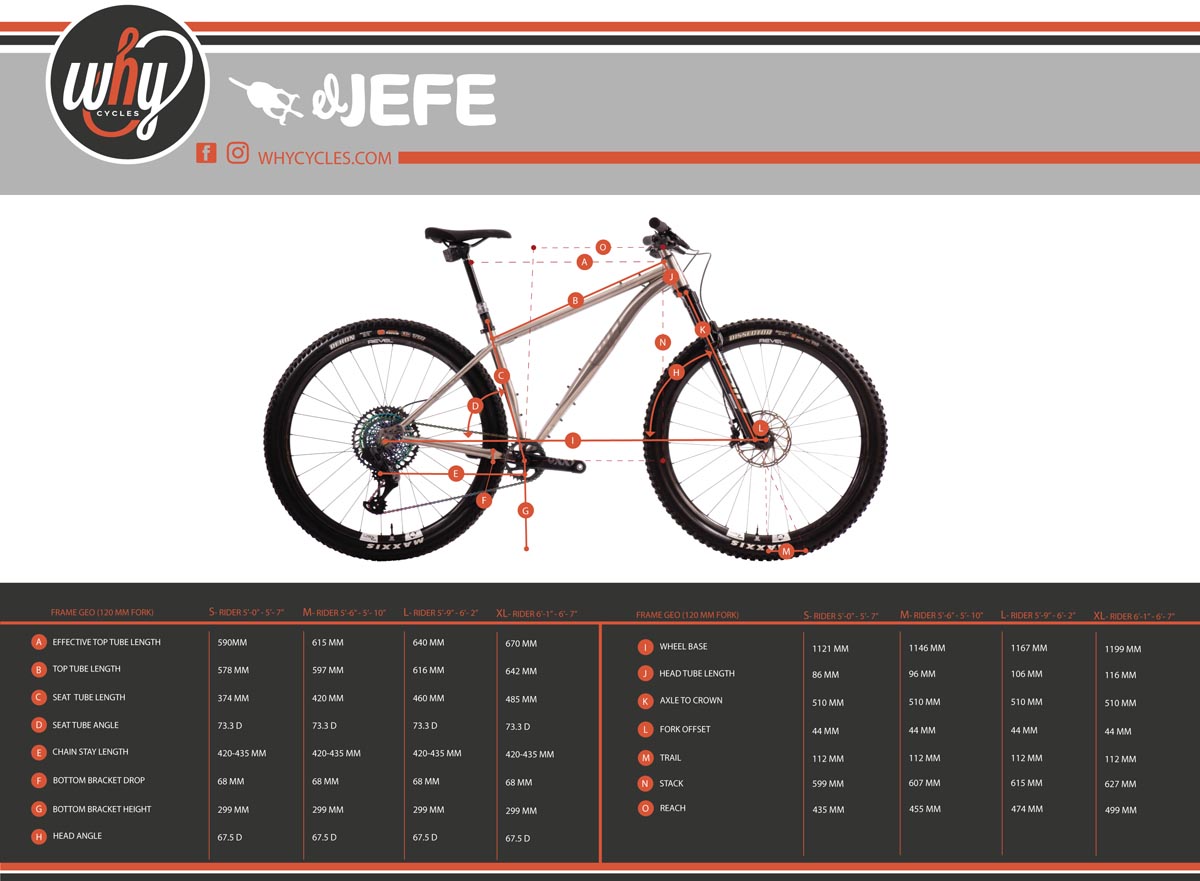 Suspension corrected for a 120mm travel fork with a 44mm offset, the frame uses a straight top tube and is dropper compatible. 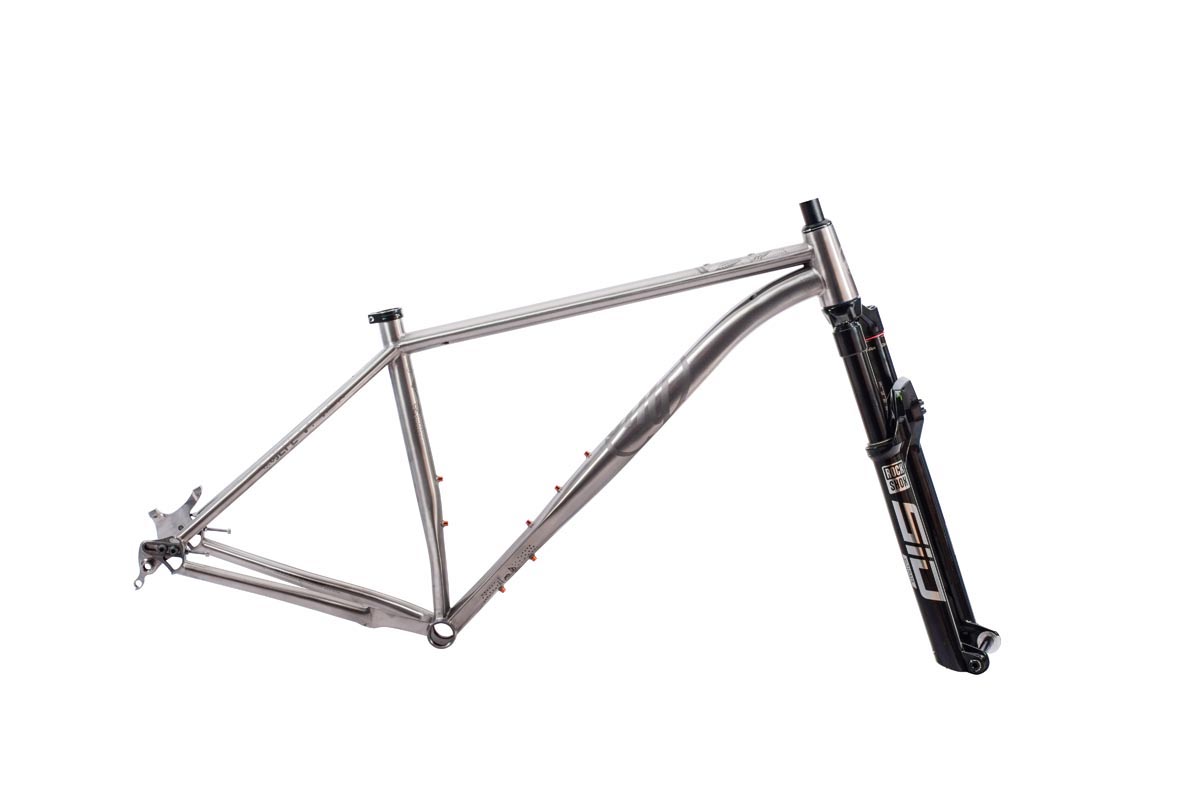 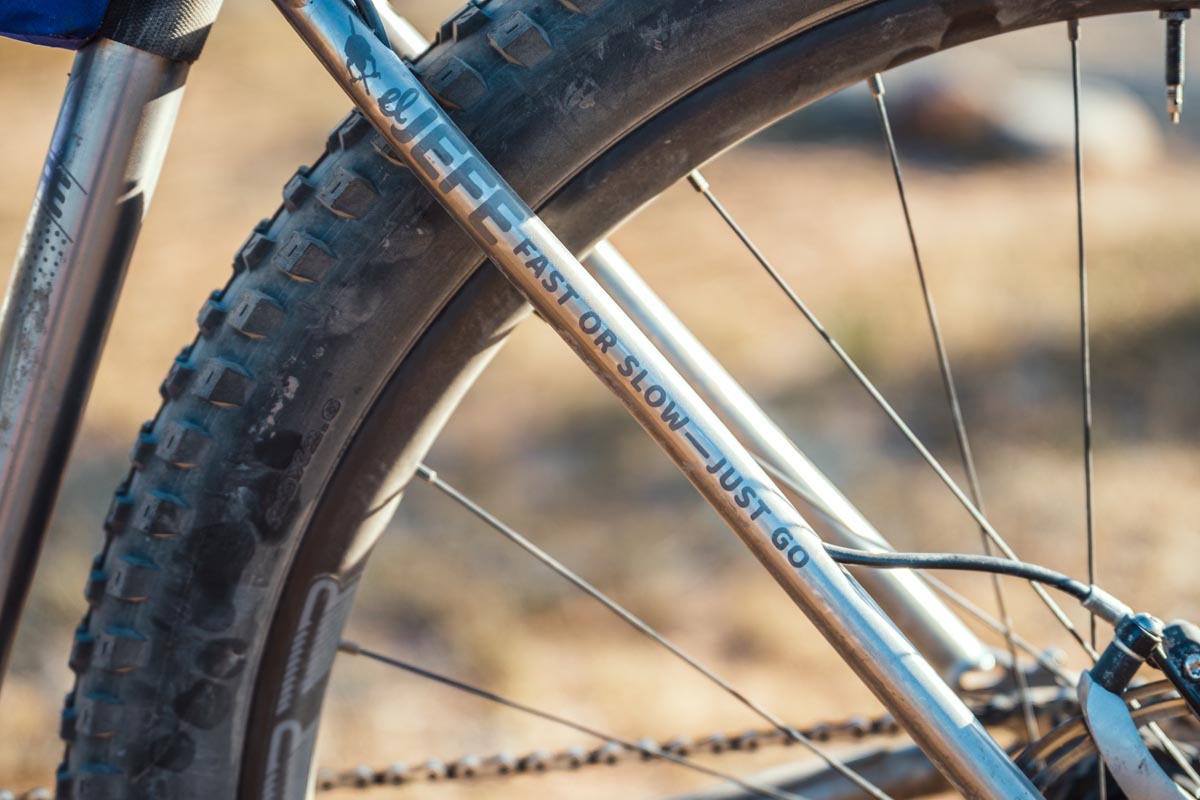 Additional frame details include a threaded 73mm bottom bracket, Boost axle spacing, 180mm direct mount rear brake spacing, and a 31.6mm seat post. As usual, Why has had some fun with the sandblasted graphics, and has included a number of Jefe special touches – including his mantra of “Fast or Slow – Just Go” on the seat stay.

Initially, the el Jefe will be offered in three different ways – though not as a complete bicycle. You’ll be able to purchase one as a frame only ($2,349), frame + Rock Shox SID Ultimate fork ($2,999), or as a frame + fork + Revel’s new RW27 Fusion-Fiber wheels for $4,499. All three options include a CaneCreek 15-series IS42/IS52 headet, seat collar, and the rear Maxle. Frames are in stock, and shipping now.

Interestingly, Why Cycles is taking a page from the skate industry and making the el Jefe a true ‘pro model’. That means that for every bike sold, Why will be giving a portion of the proceeds directly to Jefe to support his racing career. 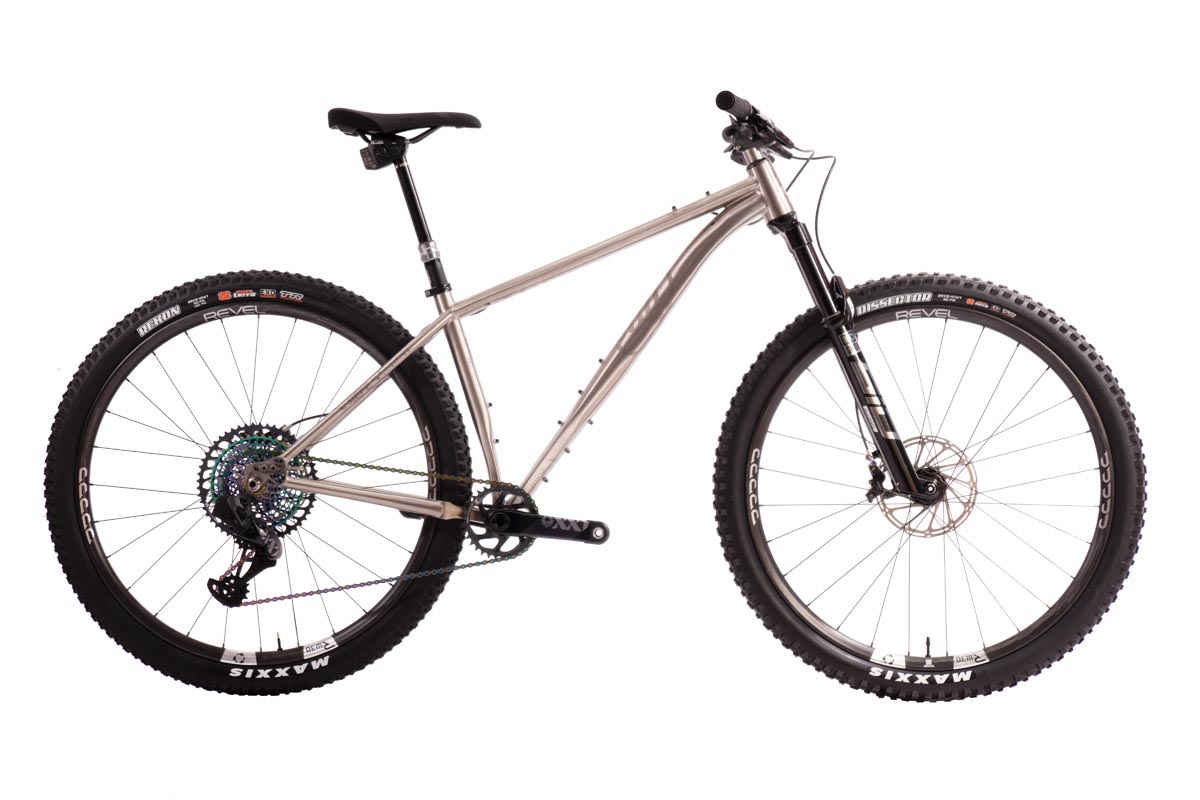 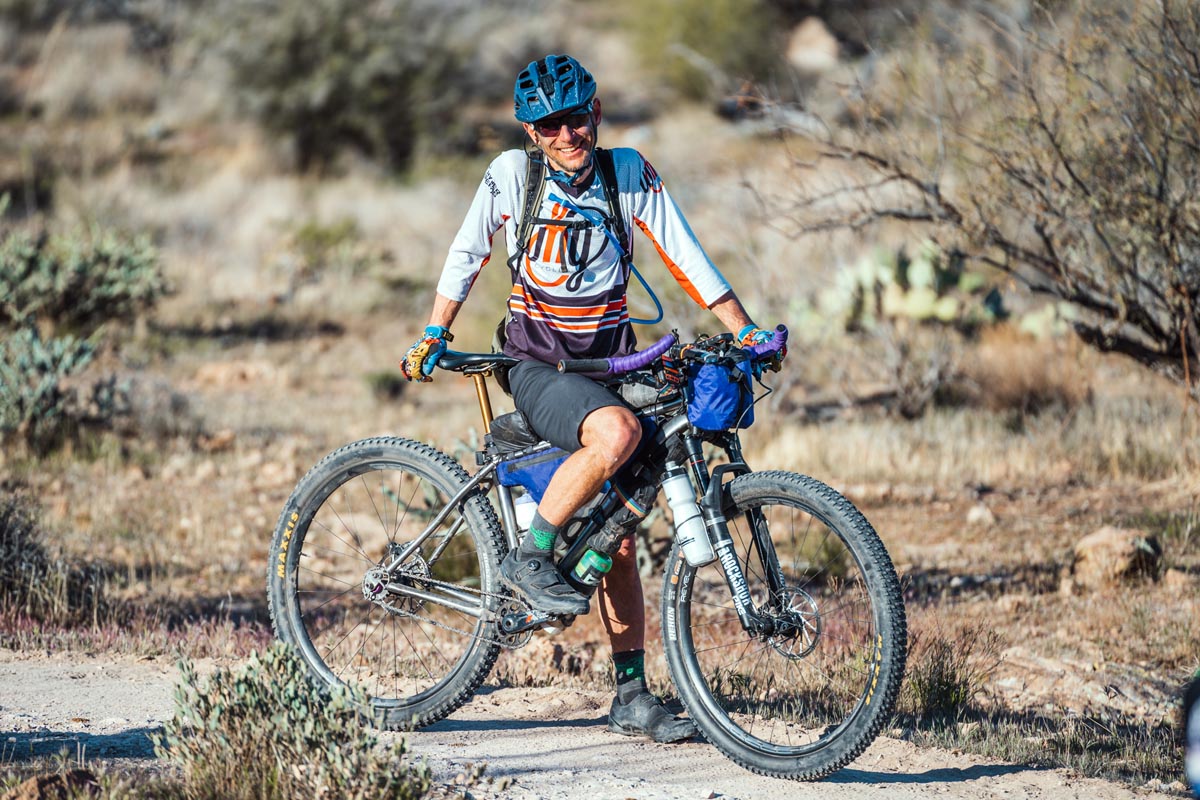 A little about Jefe Branham (From Why Cycles)

Jefe moved to Colorado on a whim way back in 1992 and in short time the sage covered hills, the small town living and cold AF winters won his heart over. Moving through the mountains, breathing in the fresh air and feeling small in the immense landscape began to creep deeper into his blood. After hiking the north half of the Colorado Trail back in 1994, there was no turning back. Being outside and pushing the limits of what the mind and body could do became a lifestyle and eventually an obsession.

In 2001, hiking and skiing were replaced by mountain biking. Jefe started by spending a summer touring with a BOB trailer and his dog all around the Gunnison Valley, culminating with a trip up the Colorado Trail from Durango to Gunnison. Next, he spent a few years racing 24 hour races and 100 milers. Then in 2006, Jefe started and finished the infamous Grand Loop outside of Grand Junction, CO. He went right on to the Colorado Trail Race (CTR), the Arizona Trail Race, and the Tour Divide. Self-supported bikepack racing was right up his alley and the results were telling. He has racked up 4 Colorado Trail Race wins with 8 finishes, 1 Arizona Trail Race 300 win with two finishes, 1 Tour Divide win and another finish. After the 2014 Tour Divide win, Jefe took a small step back from racing, had hand surgery, fell in love, got married and had a daughter.

Now Jefe is back at it. In his first event on a Why Cycles bike, Jefe rode a Big Iron to victory in the inaugural Drift 100, an ITI qualifier. Most recently, on April 1st, Jefe rode his signature frame to the fastest known time of any singlespeeder on the Arizona Trail 300 course.  Plans to race in 2021 are somewhat up in the air until the world is not fighting a pandemic, but the dream is very much alive!