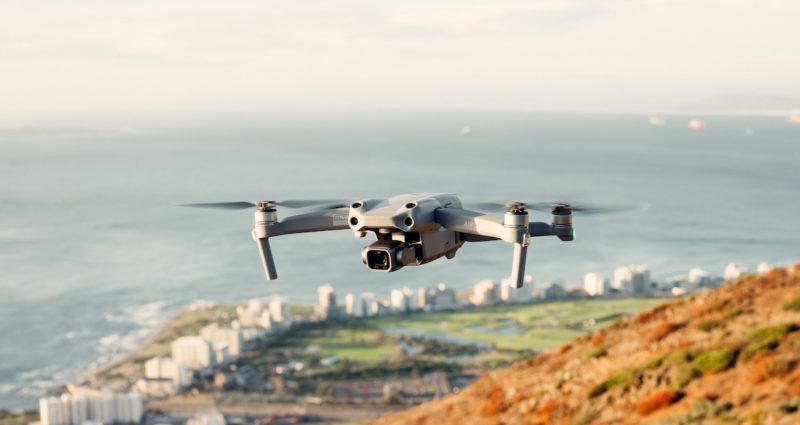 DJI has long been known as a leader in drone technology. The DJI Air 2S only reinforces that reputation with a slew of upgrades to make your drone footage stand out among the rest.

DJI says it has improved both the flight experience and the footage and photography features. According to DJI, the Air 2S is the first drone of its size to capture 20-megapixel images or video in 5.4k. Before the Air 2S, you’d have to use a much larger and complex drone to hit those targets. 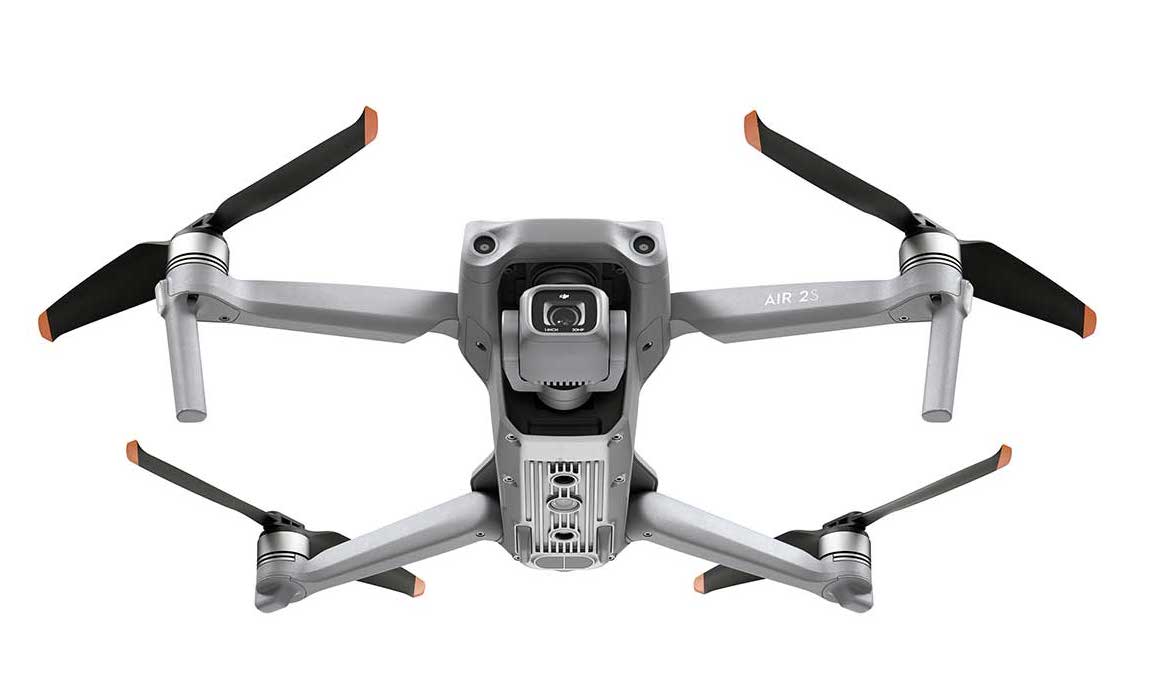 The Air 2S drone is foldable for easy storage.

With the also-recently-introduced Mavic Air 2 remaining in the line, the big upgrade for the 2S is its huge 1″ camera sensor. Prior to this, if you wanted that level of image capture quality, you’d need a pro-level drone capable of carrying your DLSR. Here’s the highlights that set this one apart: 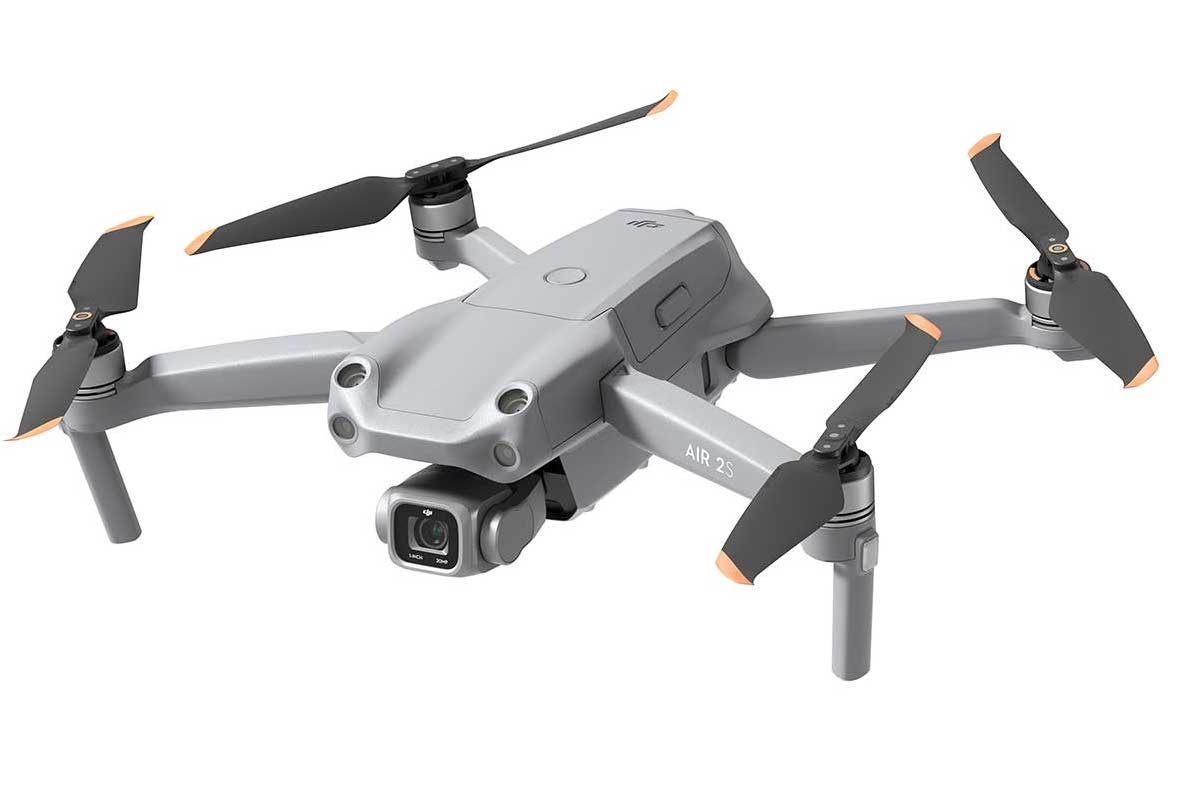 Past DJI drones have offered Quickshots – preprogrammed flight paths like Sphere and Boomerang. Now there’s Mastershots, which flies the drone through 10 distinct patterns at once. You select the subject on the app’s screen, then it goes to work and keeps your subject centered in the frame through all of it.

When the flight’s over, the drone merges all the footage under a single theme and creates a video for you.

There’s also FocusTrack, which uses Spotlight, ActiveTrack and Point of Interest to make it super simple to have the drone follow you along or circle your subject, all while you’re moving. 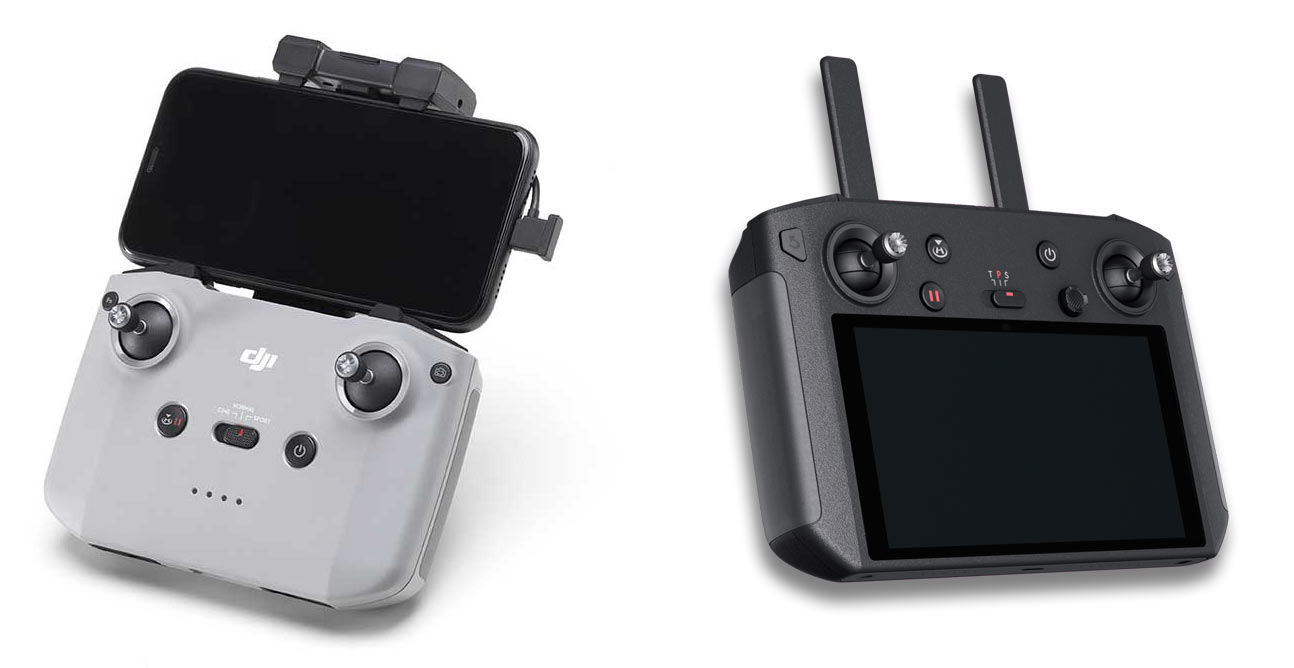 The Air 2S comes with their standard controller (left), but works with their upgraded SmartController (right) with built-in screen and 3rd party app compatibility.

The Air 2S uses a three-axis mechanical gimbal to keep your footage looking as smooth as possible. Four-way directional obstacle sensors warn the pilot when the drone is approaching anything that might negatively alter the flight. That means you can focus more on the footage and less on your (not so) fine flying skills.

If you want to detach yourself from responsibility, even more, the Air 2S features DJI’s APAS 4.0 autopilot system.  That means the drone will pilot itself around obstacles so you can avoid an undoubtedly fun-to-watch but costly crash. They say upgraded algorithms help it fly faster and avoid better, too.

The return-to-home feature lands it right where you launched it. 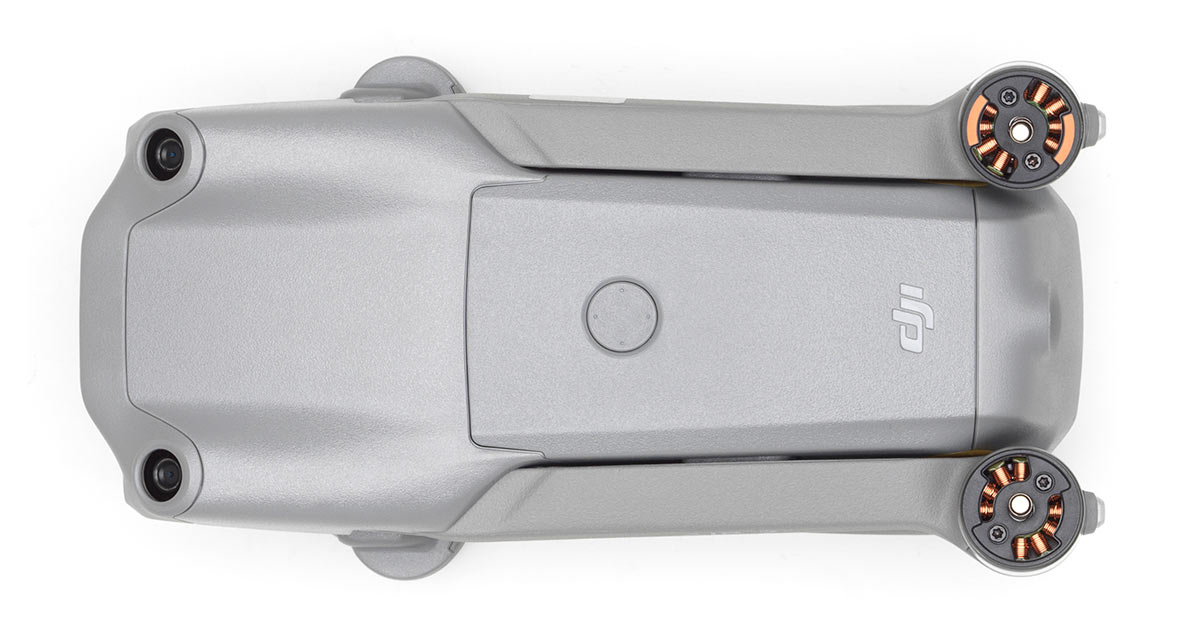 The Air 2S folds up easily for compact storage. And when it’s time to take it out for filming, DJI says its third iteration of OcuSync 3.0 brings “the most reliable transmission technology in the drone market” to this less bulky tool. That assures you get a stable connection throughout your flight and filming. 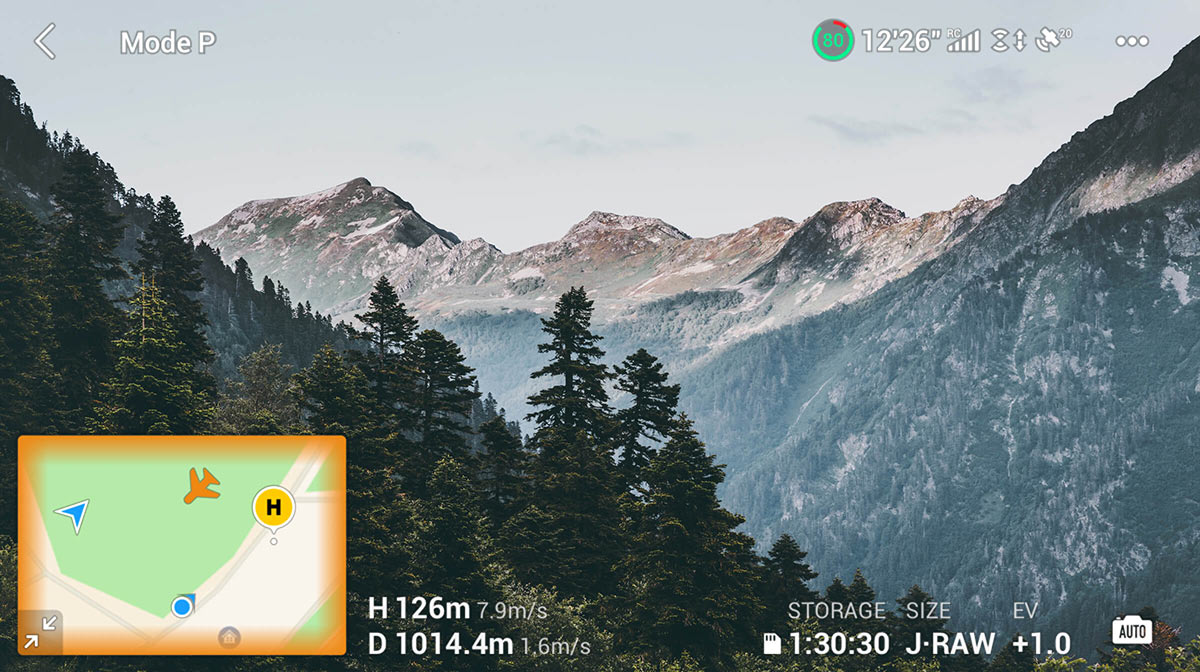 Even better, the Air 2S adds ADS-B, which alerts you to nearby airplane and helicopter flights, shows them on your flight map (on the app attached to the controller), and send audio and visual alerts so you can get out of the way (and avoid legal trouble).

This small drone offers these features and more, which is a list usually reserved for larger and more costly drones. The compact design and excellent shooting capabilities make the Air 2S worth putting on your radar if you’re after professional results in an easy-to-use package.

With both drones now sporting a 1″ sensor and additional obstacle avoidance features, what separates them? Why pay more for the Mavic 2? Here’s a basic comparison between the DJI Air 2S and DJI Mavic 2 Pro drones:

The specs don’t tell the whole story, though. Yes, there are a few points where the Air 2S beats the Mavic 2 Pro, namely video resolution, bitrate, and minimal focus distance. But the Mavic 2 Pro has a better overall camera, using a Hasselblad camera with a wider range of F-stops available to adjust focal range.

They both shoot in JPG+RAW, plus HDR, but the Air 2S adds several panoramic modes that captures multiple images and automatically stitches them together for you.

The obstacle avoidance sensors are mixed. While the Mavic 2 Pro is the only one that has left-and-right side sensors, the Air 2S has a wider range of vision on its forward-facing sensors, and can detect things much closer, which should (in theory) let you fly closer to things before alarms go off.

The big takeaway is that we suspect it won’t be long before the Mavic 3 shows up with even more impressive specs to justify its $600 price premium. Unless you need the side sensors to keep from crashing, the Air 2S looks like the one to beat. 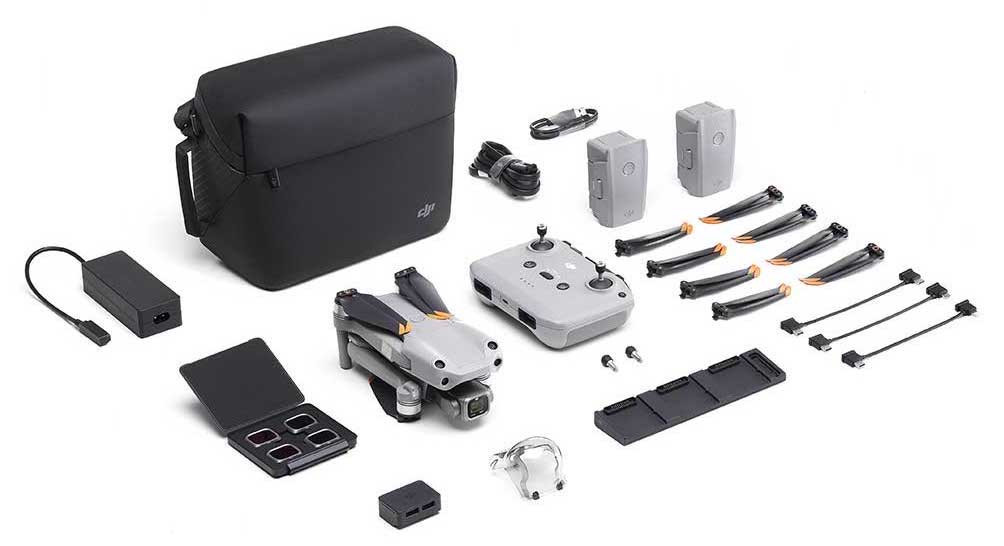 What’s in the box.

The Air 2S is available now in two packages. The Standard combo retails for $999 and includes the drone, remote controller, one battery, and all the cables and parts.

The Fly More Combo costs $1,299. It includes everything from the Standard combo and adds 2 batteries (for a total of 3), ND filters, a charging hub, and a shoulder bag.