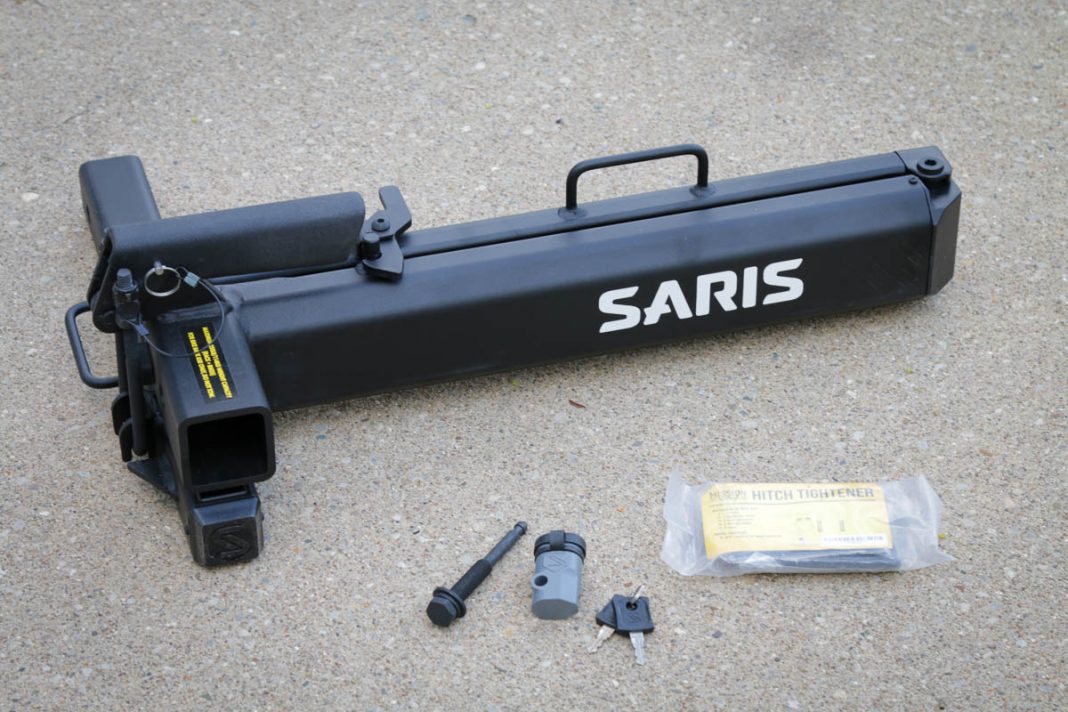 Tray style hitch racks are one of the best ways to carry your bikes. One of their few downsides though is that most of them will block access to your trunk. While there are a few bike racks that integrate a swing away adapter into their design, it’s become more common for rack makers to offer an add-on accessory to allow access to the back. Which is exactly what Saris has done here. 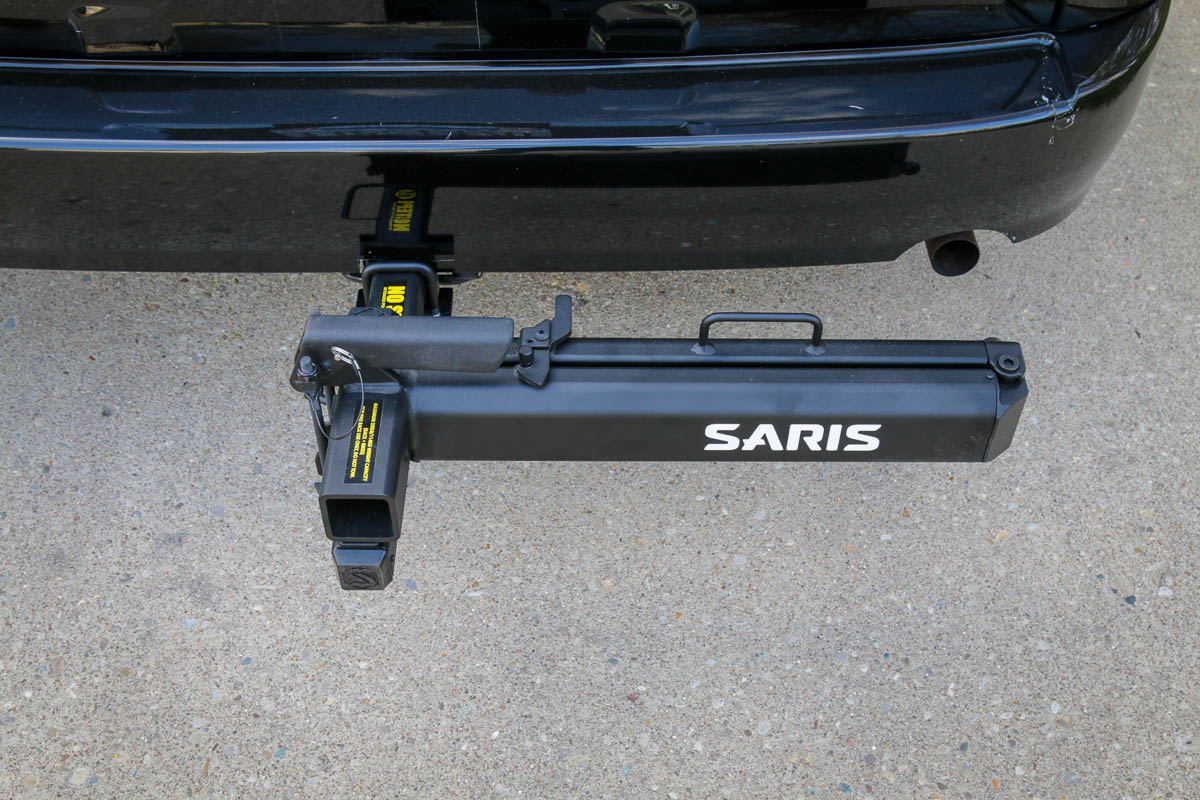 Simply called the Swing Away Accessory, the adapter is fairly compact which keeps the weight down to 34.5lbs making it one of the lighter options in the category. But even at that weight, these things can still be a challenge to lug around your garage. To make it easier, Saris added two integrated handles which are a nice touch. 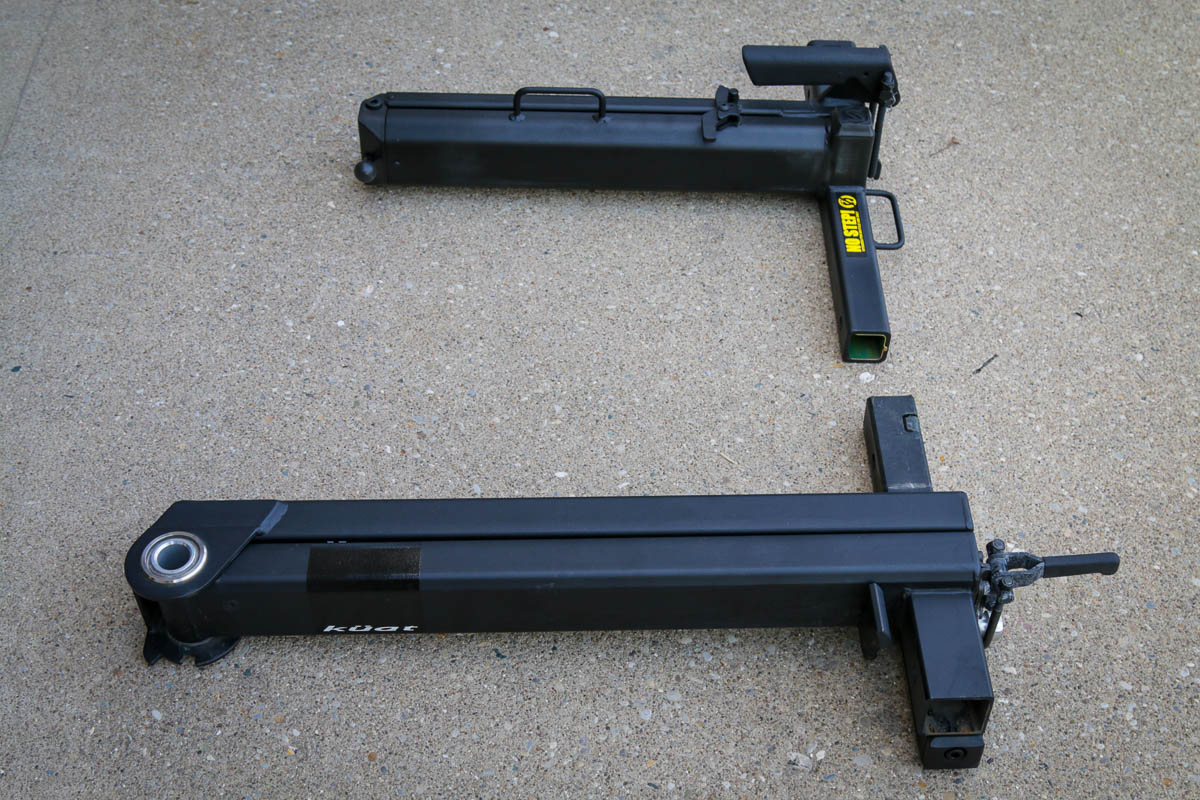 Compared to the Kuat Pivot V2, you get a sense of how much smaller the Saris Swing Away is. As mentioned, that’s good news for lower weight and smaller vehicles, but very large vehicles might find it a bit short to clear the rear doors. Using RakAttach’s Small/Medium/Large options as a sizing guide, the Saris is closest to the medium at 23″ long, while the Kuat would be their large at 28″ (measuring from the center of the hitch to the end of the pivot arm).

The shorter length also seems to make it play nicer with exhaust pipes on the right side of the vehicle – which is important because the Saris Swing Away only comes in a passenger-swing model. I’ve had issues in the past with other passenger-swing models on my Element, but this seems to be working well so far (it probably doesn’t hurt that it’s farther away from the vehicle – see below). 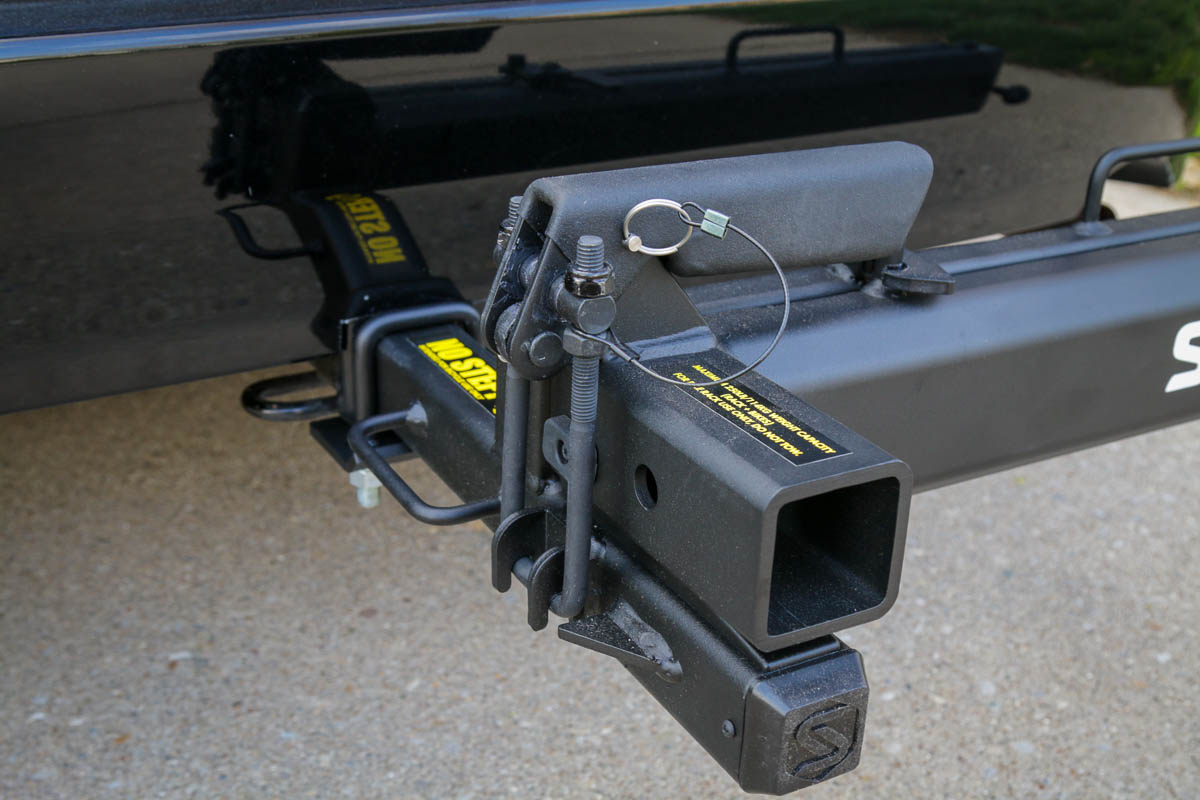 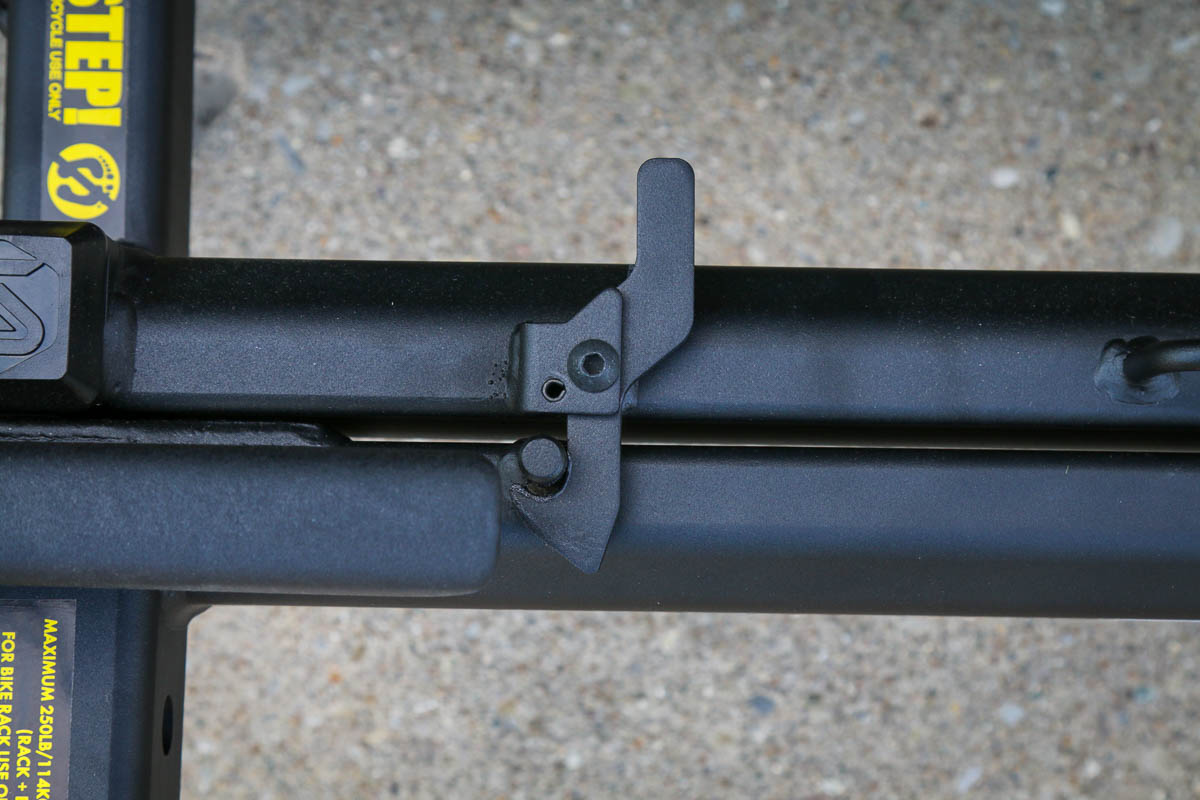 One thing you’ll notice about the Saris is that there are more steps to the operating process than the Kuat Pivot V2. According to Saris, this was all about safety and passing their strict testing protocol. In addition to the safety pin on the clasp handle, there is also a quick release hook mounted on top of the adapter. To open the adapter, you have to remove the safety pin, undo the clasp, and then hold the quick release hook open while pulling on the adapter – an operation that requires two hands. 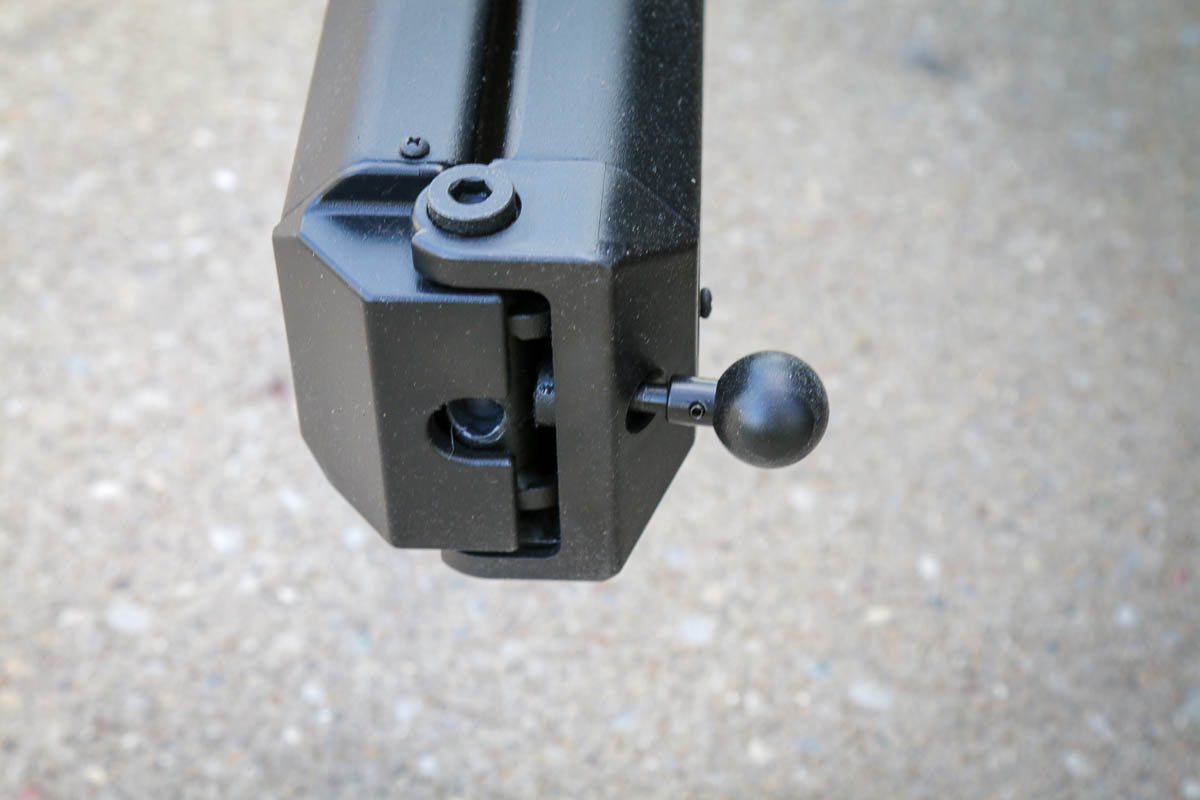 Once the adapter is opened fully, a quick release pin locks it in place to prevent it from closing on your if you’re parked on an incline.

Even when locked, the adapter has quite a bit of play at the joint, so the bikes or rack may move on you a bit. To close the adapter, you must pull that quick release pin and hold it open, while closing the adapter. Also a two handed operation which can be a bit annoying if you let go of the pin too soon thinking you’ve cleared the latch only to have it stop in its tracks. 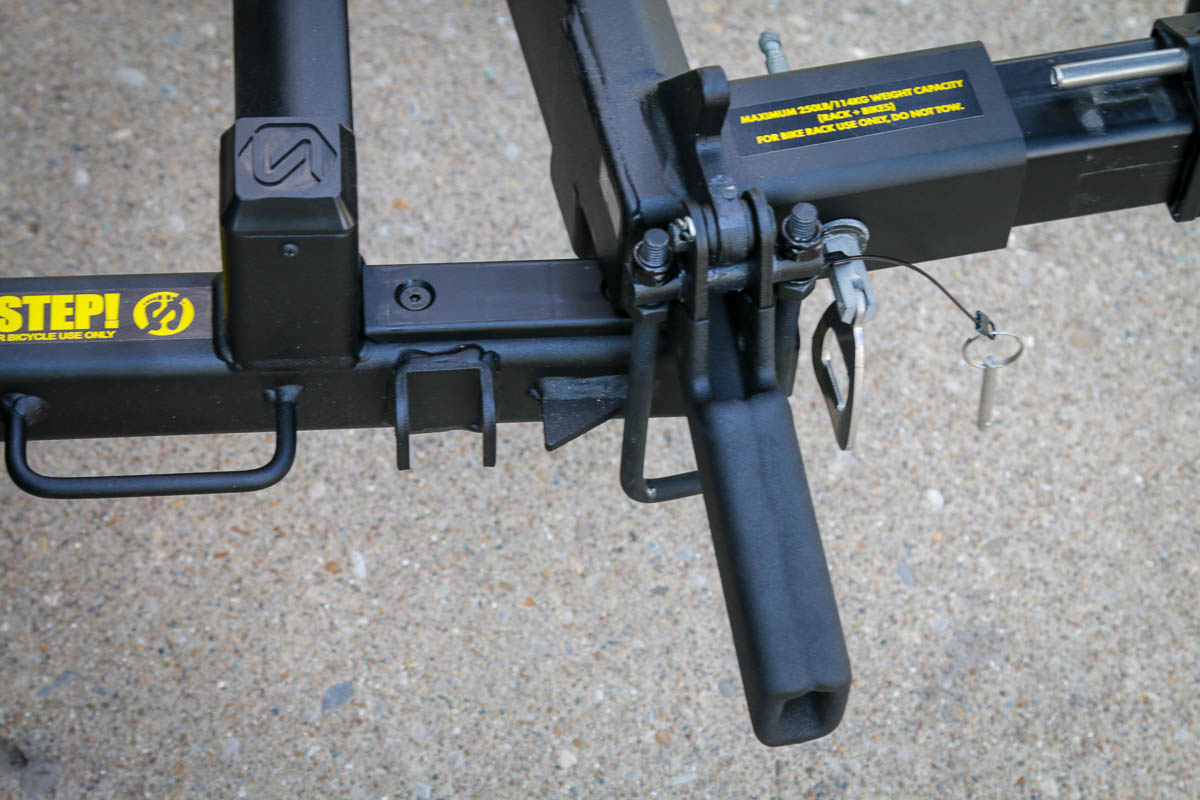 To make closing the adapter easier, Saris added a ramp to push the clasp out of the way. This works well if you close the adapter fast enough. Move too slowly though, and the clasp can fall between the ramp and the hook, preventing it from closing. At least while closing, you don’t have to hold open the quick release hook on top – that automatically latches in place. 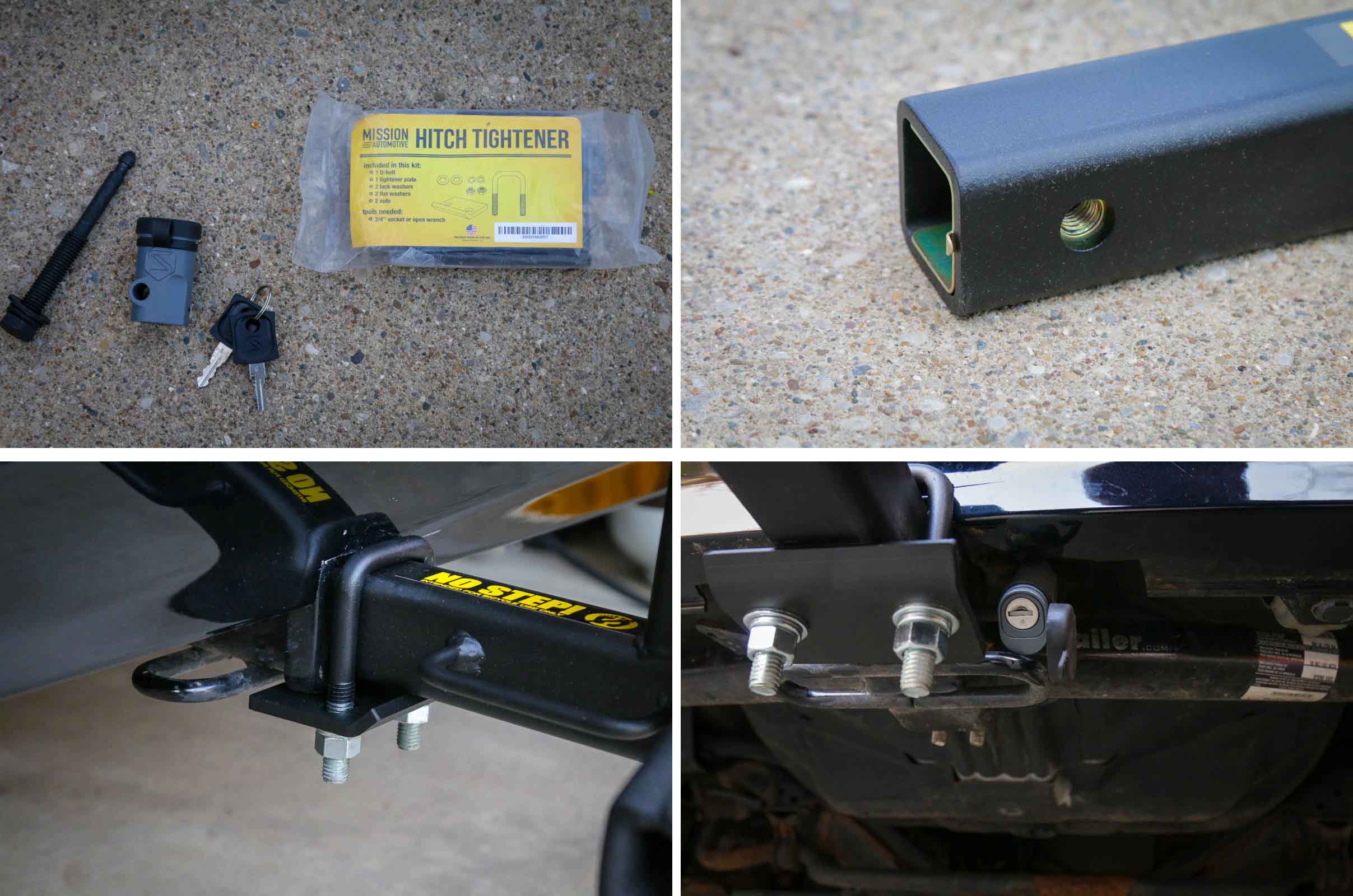 Further redundancy is found at the 2″ hitch attachment with the Saris Swing Away using the same Hitch Tightener device used on RakAttach models. The rack first installs with a traditional threaded hitch pin, and then is further supported with the Hitch Tightener from below. This guarantees a rock solid fit, but does require more effort to install it – as well as an additional socket. The excess thread sticking out requires a deeper socket, which is then too long for me to fit under the bumper to tighten the hitch pin, so I have to use a shorter socket of the same size to mount this to my vehicle (not a huge deal, just not as simple as others). 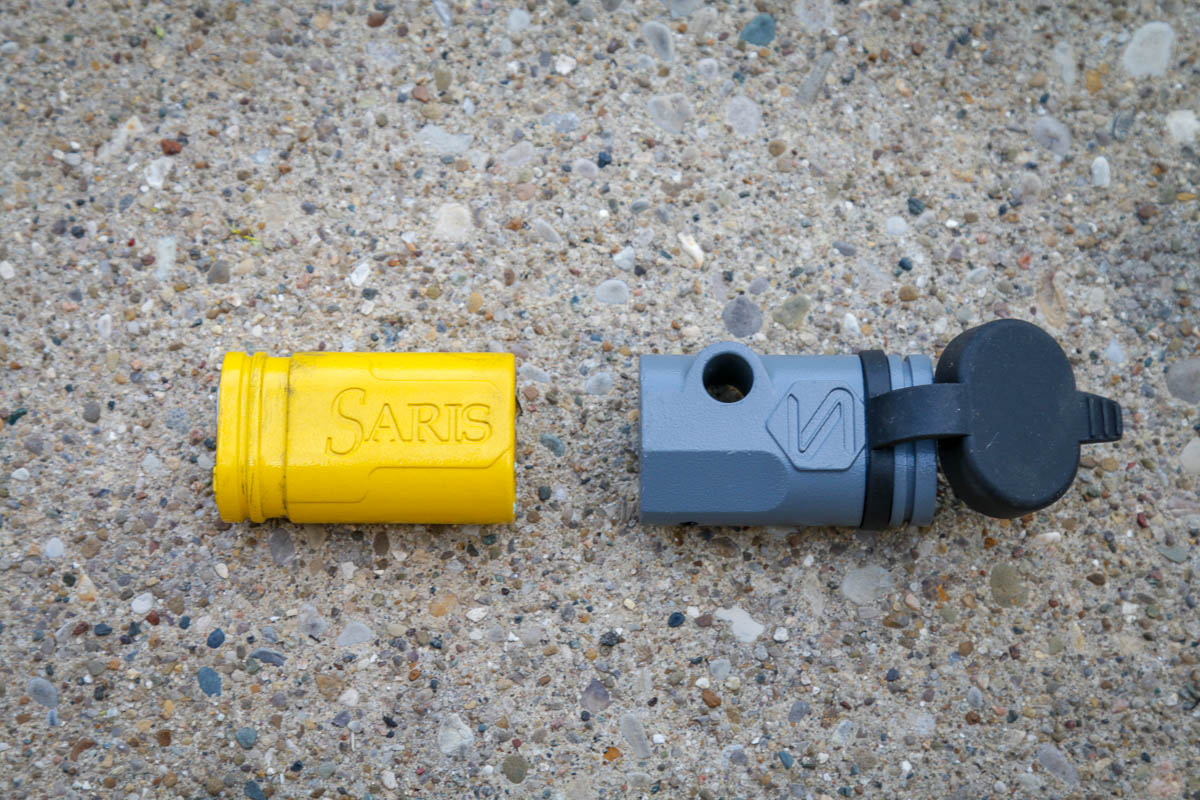 I do quite like the new lock for the hitch pin which repositions the lock by 90° for easier access when it’s under your vehicle. 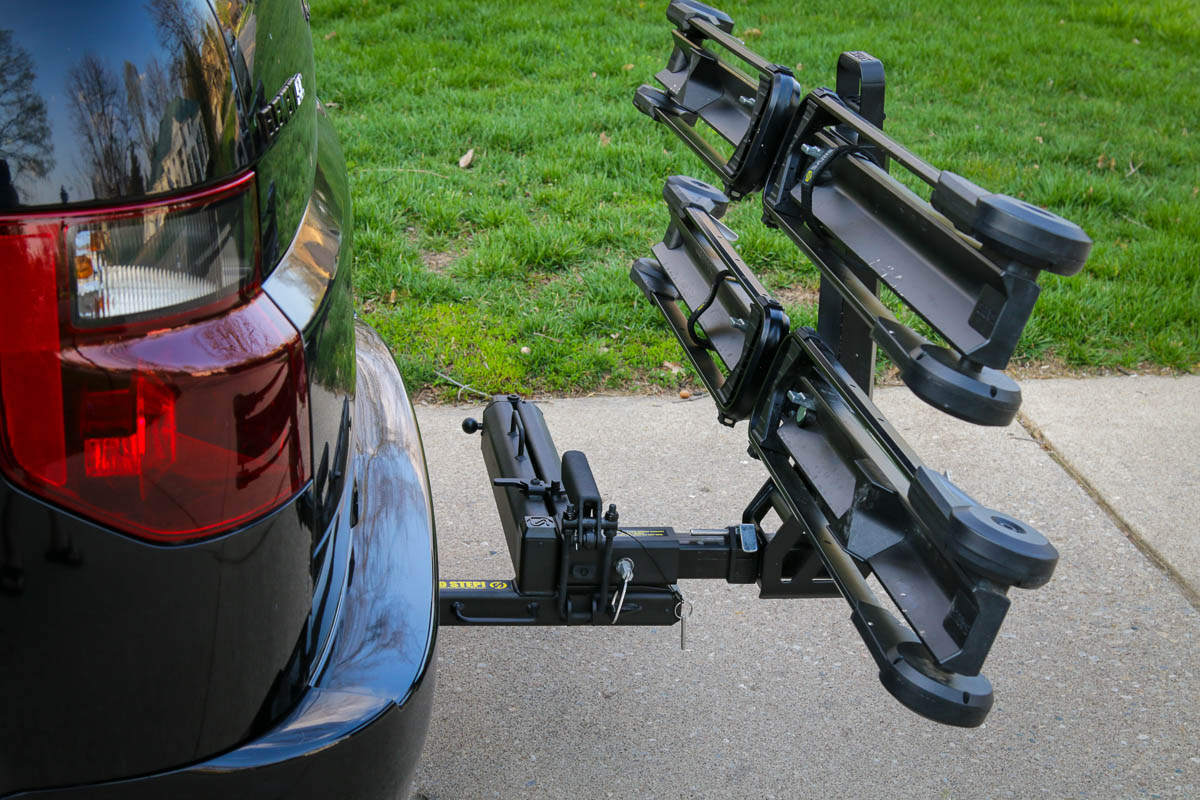 However, the list of compatible racks below show otherwise. According to Saris, this is not because the Swing Away Adapter can’t handle the weight, but because many of Saris’ four bike racks are not built to handle the extra leverage that the Swing Away adapter would subject them to. Saris’ Manager of Product, Kellen Pagel, stated, “We had to put all of our racks through the full test protocol while on the swing away, and the Freedom and SuperClamp 4’s did not pass the tests, so we did not feel comfortable approving them for use. That is also why the Freedom and SuperClamp 2’s are limited to 35lb per bike on the swing away instead of 60lb like they are approved for when used directly in a vehicle’s hitch. The MTR 1 and 2 are approved for 60lb per bike on the swing away though. When the Freedom and Superclamps were originally designed, they were not designed for use in any type of extender or swing away. This is now something we are planning for with future rack development. Approving the swing away for 250lb does allow for other brand’s racks to work in the swing away to that maximum weight, if approved by that brand.”

So before you go adding any rack adapter to any rack set up, do you homework. Even though it might be within the weight limit of the adapter, you also need to make sure the rack is approved for use in an adapter.

A Rough Start, but Better the Second Time Around

If it’s any indication of how difficult these adapters are to manufacture well, I’ve experienced production flaws on samples from RakAttach, Kuat, and now Saris. The first Swing Away Adapter that was sent to me had an issue with the placement of the locking clasp, so it wouldn’t tighten properly. Saris admitted they had a few from the first batch which were flawed, and sent out a replacement that was perfect. Like anything Saris, they stand behind their products with a Limited Lifetime warranty. 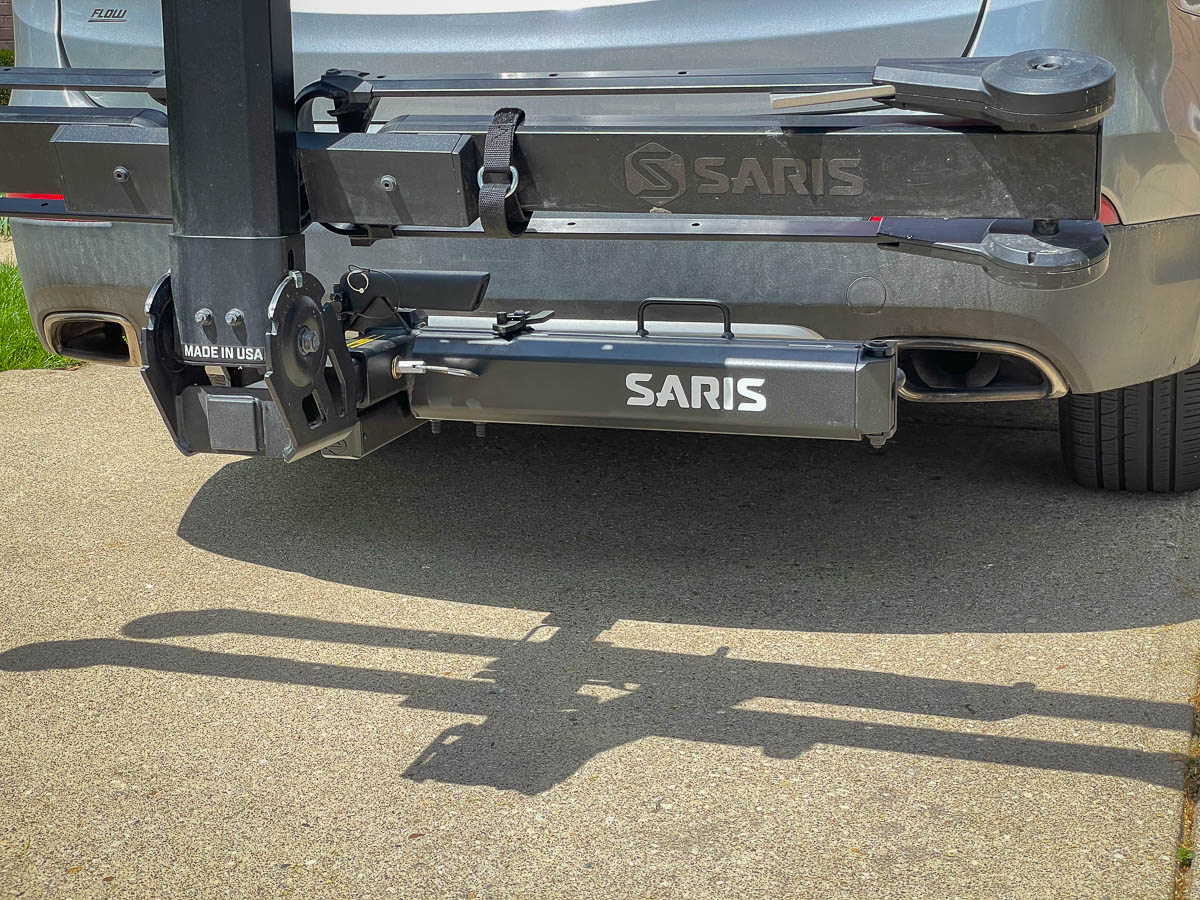 Once I had a functioning sample, I loaded up some bikes on my 2-Bike MTR rack, and set off on an 800 mile round trip. The Swing Away adapter passed with flying colors, staying tight and rattle free the entire journey.

The Swing Away Adapter does exactly what it promises. It provides a secure method of gaining access to your trunk with a rack full of bikes. The real question is whether Saris’ adapter has enough going for it to be competitive in the market.