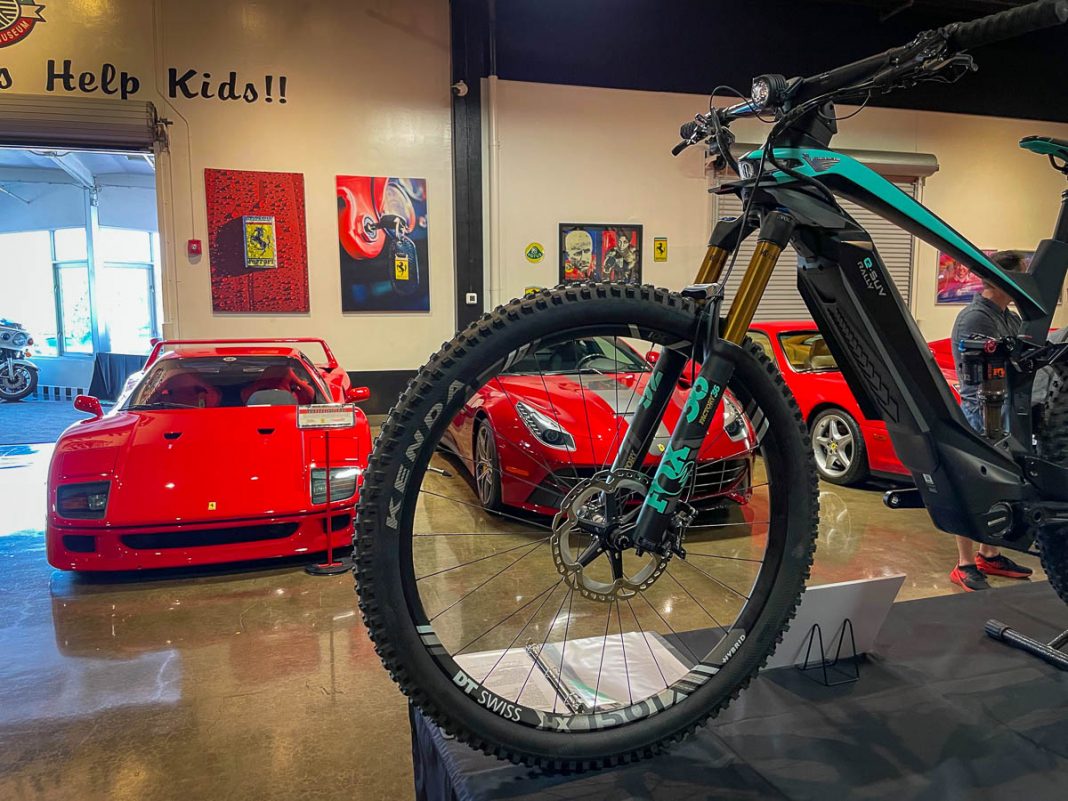 “A new vision.” That’s a bold statement for any brand to make, let alone the oldest bicycle manufacturer in the world. Now 136 years old, Bianchi was there before pneumatic tires were a thing. They also produced motorcycles for decades, and even cars under the Autobianchi marque which was a joint venture between Bianchi, Pirelli, and Fiat.

When you consider their history with motorized vehicles in addition to bicycles, maybe Bianchi’s new vision isn’t so radical after all. While Bianchi’s new CEO Pat Hus states that the brand will never abandon road racing to honor names like Fausto Coppi and Marco Pantani, the company is embracing a fundamental shift in philosophy. Focused on e-bikes. Yes, e-bikes. 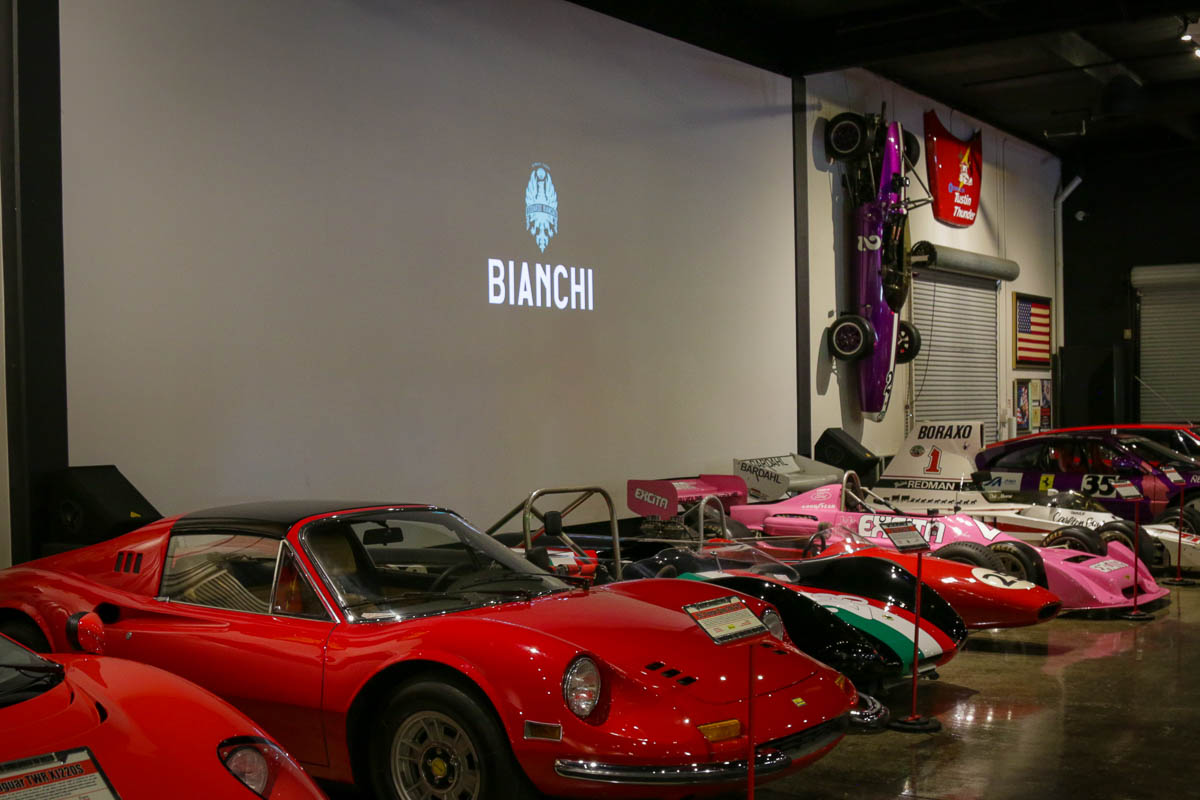 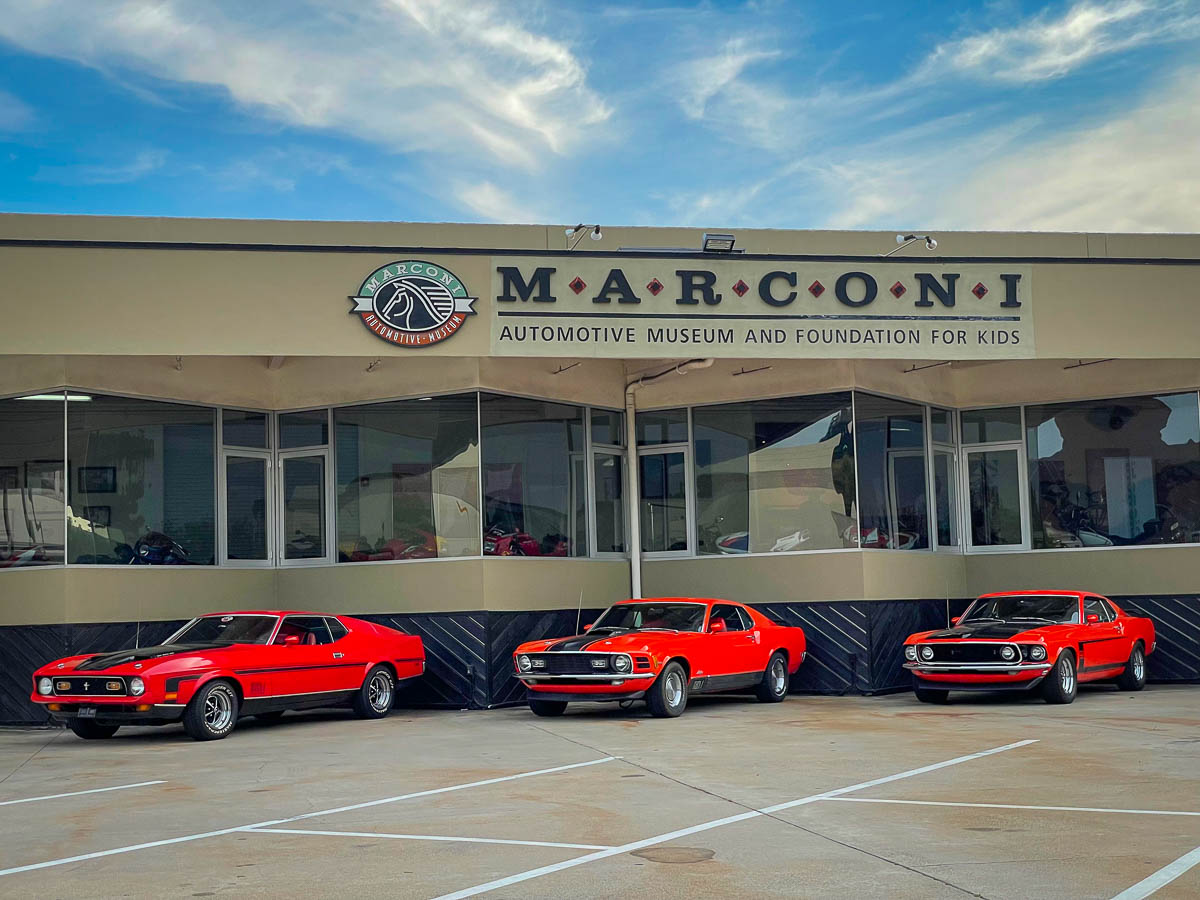 Using the automotive and motorcycling eye candy of the Marconi Automotive Museum as a backdrop, Bianchi announced that they would be concentrating their efforts on what they call Bianchi lif-e (pronounced ‘lifey’). Currently, the Bianchi product line is about 90% road and 10% e-bike. But in the future, they expect those numbers to swing to 60% e-bike and 40% road. And while bikes like their futuristic looking, $13,200 e-SUV provided inspiration for the new line, Hus says that’s not where Bianchi is going.

“Bianchi did not get into the eBike space with a me-too product, it’s innovative, it’s different, it’s got a look to it, it’s got a story to it, I am so happy with what we did.” Said Pat Hus, “There is a new vision going on here today, and you will start to get a sense of it today, with new leadership in Italy and the USA.” “Introducing Bianchi LIF-e, inspiration and innovation to deliver a new electric mobility and lifestyle collection.”

Instead, the focus is on sustainable mobility. They want to build e-bikes that get people moving, with more approachable price tags, and smart designs and features that make life on a bike more enjoyable and practical. That’s what the e-Omnia line is all about. 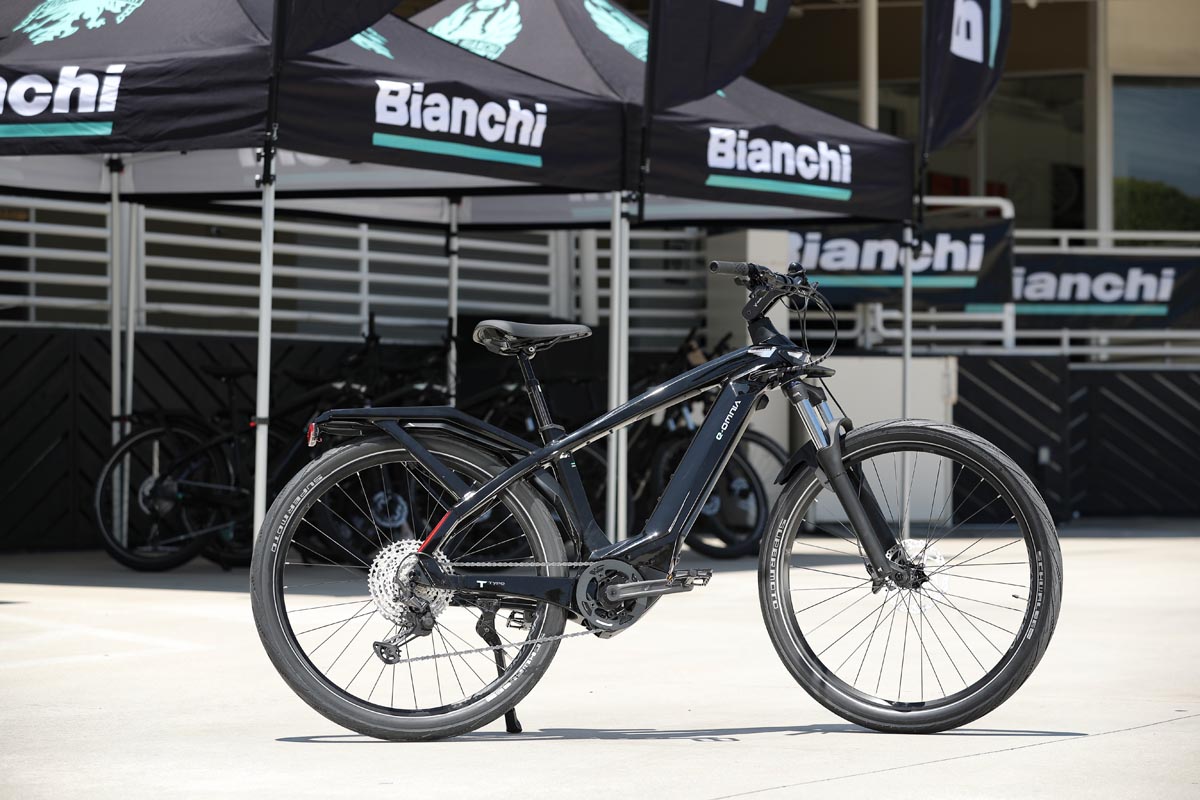 Those design goals are apparent in the e-Omnia frames. Starting with a Gravity Cast alloy frame, Bianchi points out that this manufacturing technique isn’t the best for creating ultra-light frames. But it is great for creating full featured e-bike frames where grams aren’t as much of a concern. The cast frames allow Bianchi to build complex frame parts like the head tube which includes an integrated head light while also creating an intriguing design. The individual frame pieces are still welded together, but the individually cast pieces give the bike a distinct appearance without resorting to carbon. 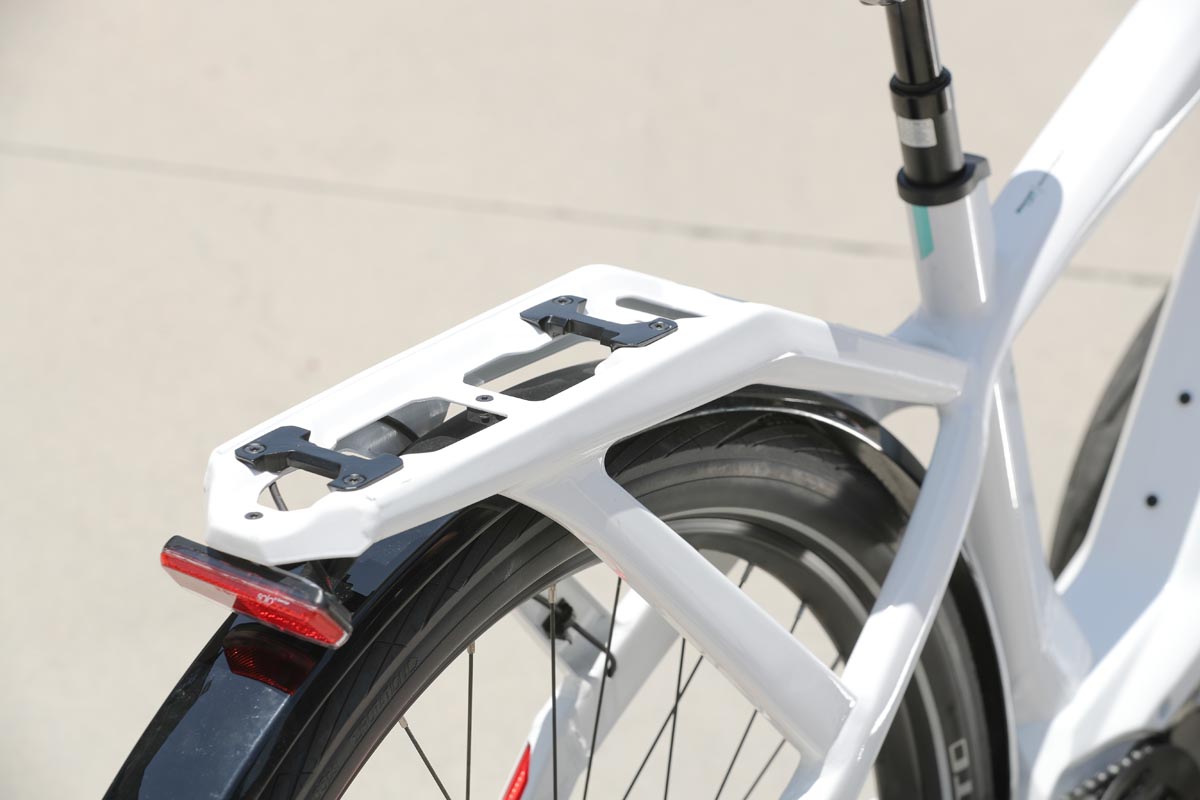 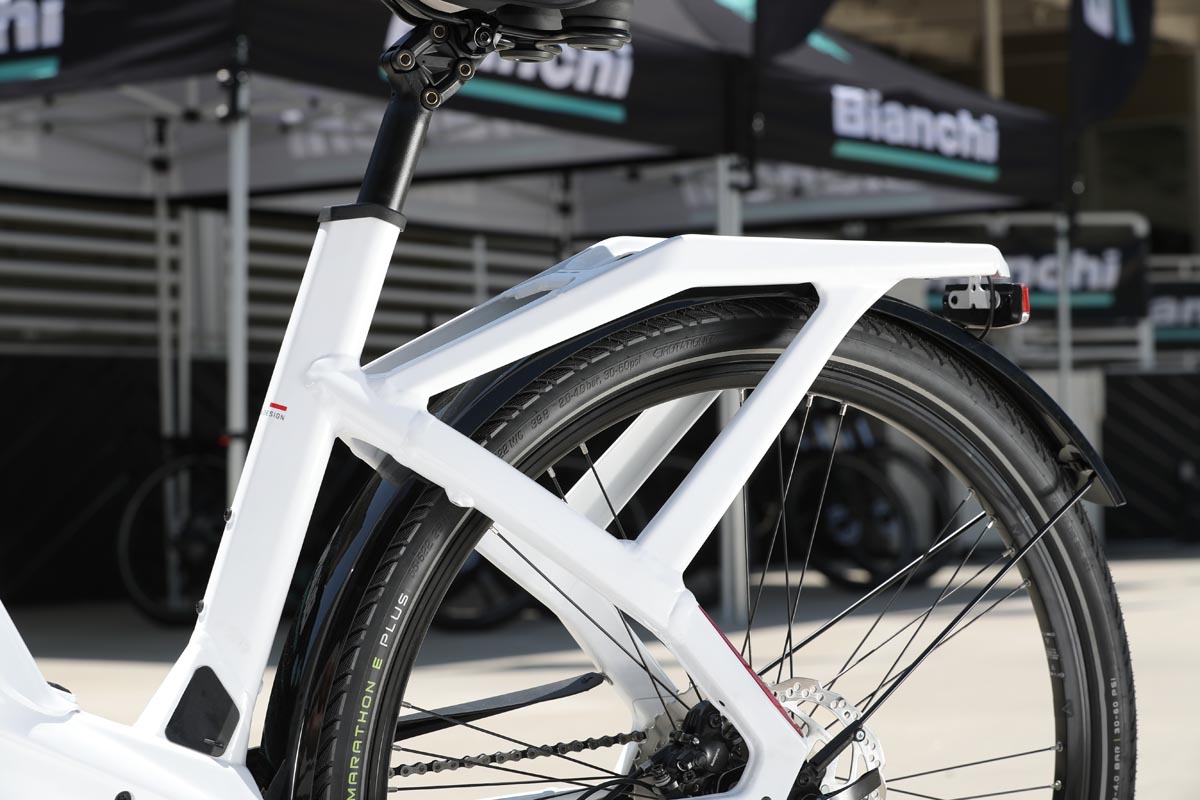 Many of the e-Omnia models also include integrated rear racks that are welded as part of the frame. That makes them lighter, stronger, and impervious to rattling or coming loose. Bianchi states that they’ve also partnered with Atran Velo to create a line of accessories for the e-Omnia line including bags and child seats. Additionally, the bikes include locking batteries with Abus lock cores and keys plus additional Abus aftermarket locks that can be added (and keyed alike) for accessories. 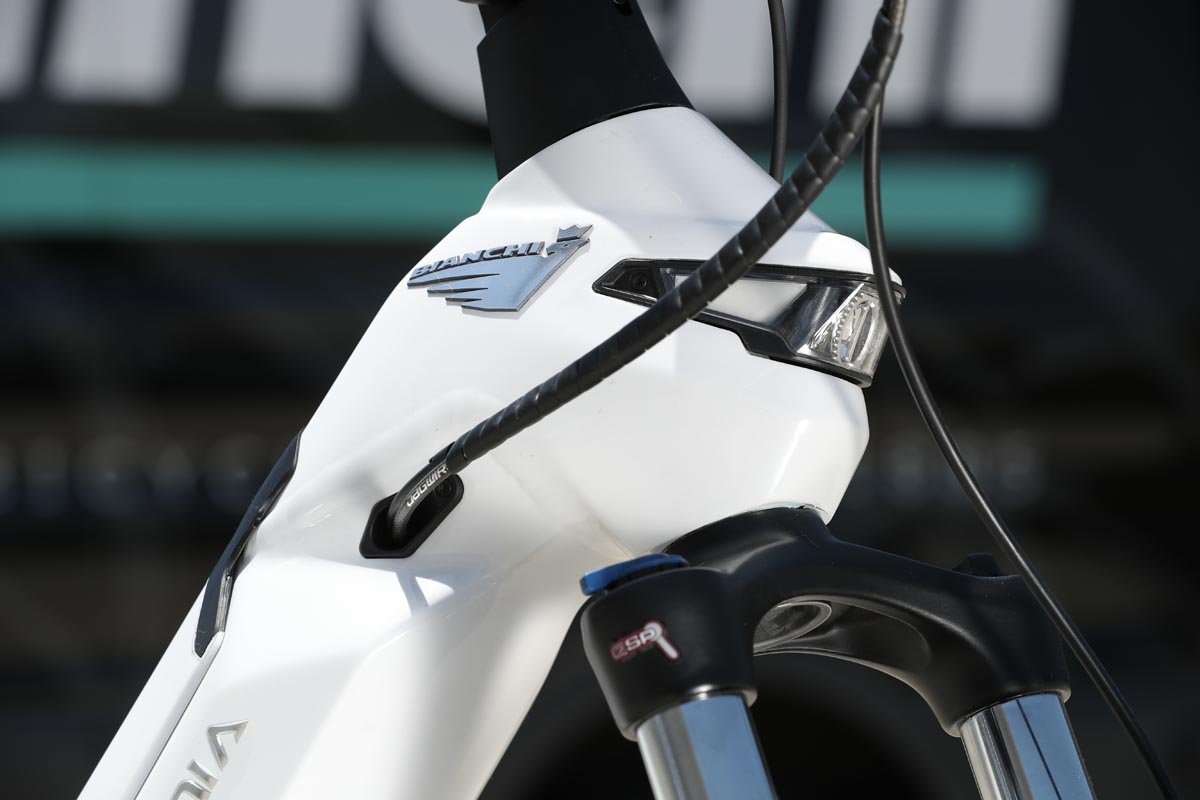 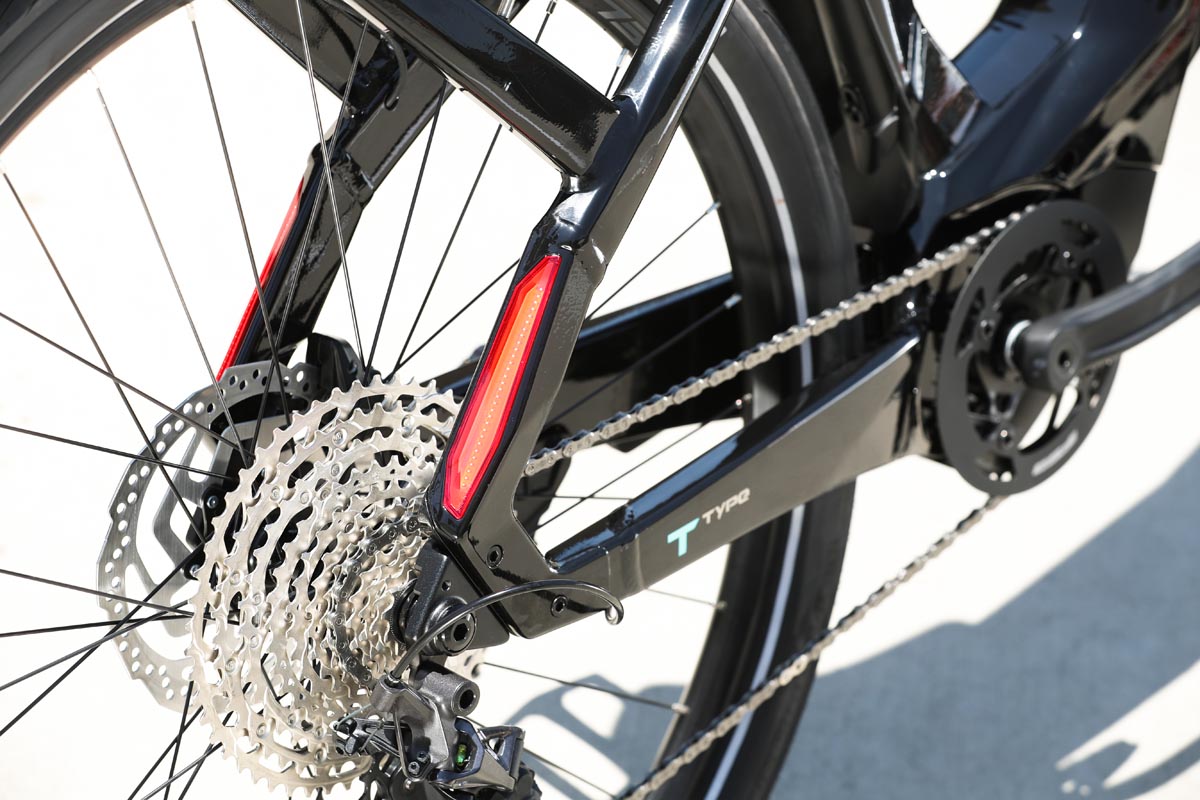 And those integrated lights? Those aren’t just for looks. Not only do they provide 360° of visibility, but the rear light is said to be visible up to 500m (1640 ft) and the front to 100m (328 ft). What if the e-bike battery dies? They thought of that too – the lights will continue to function for 2hrs after the pedal assist stops working due to a depleted battery. 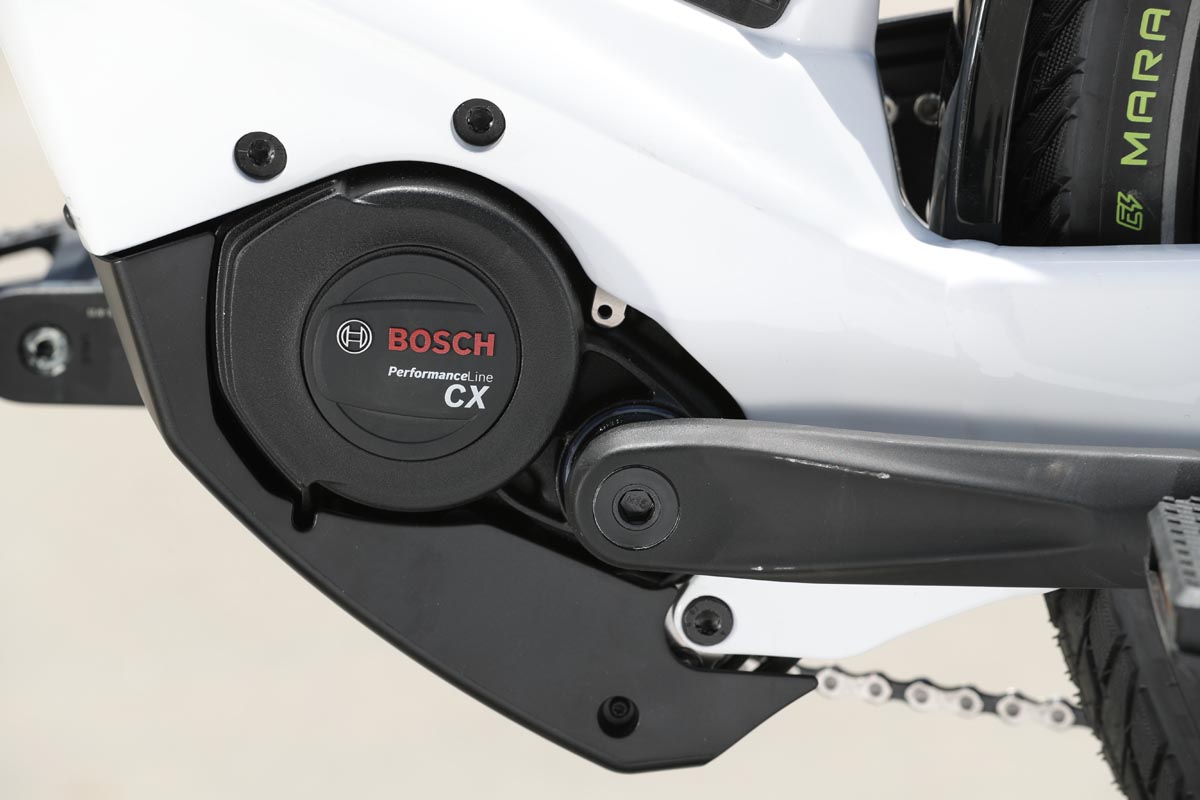 When it comes to powering these e-bikes, Bianchi gets an assist from Bosch. All models feature a stout 85Nm of torque from the 250w Line CX motors. On road-going models headed to the U.S., the assisted top speed is limited to 28mph and the assist is only provided if you are pedaling (no throttle). 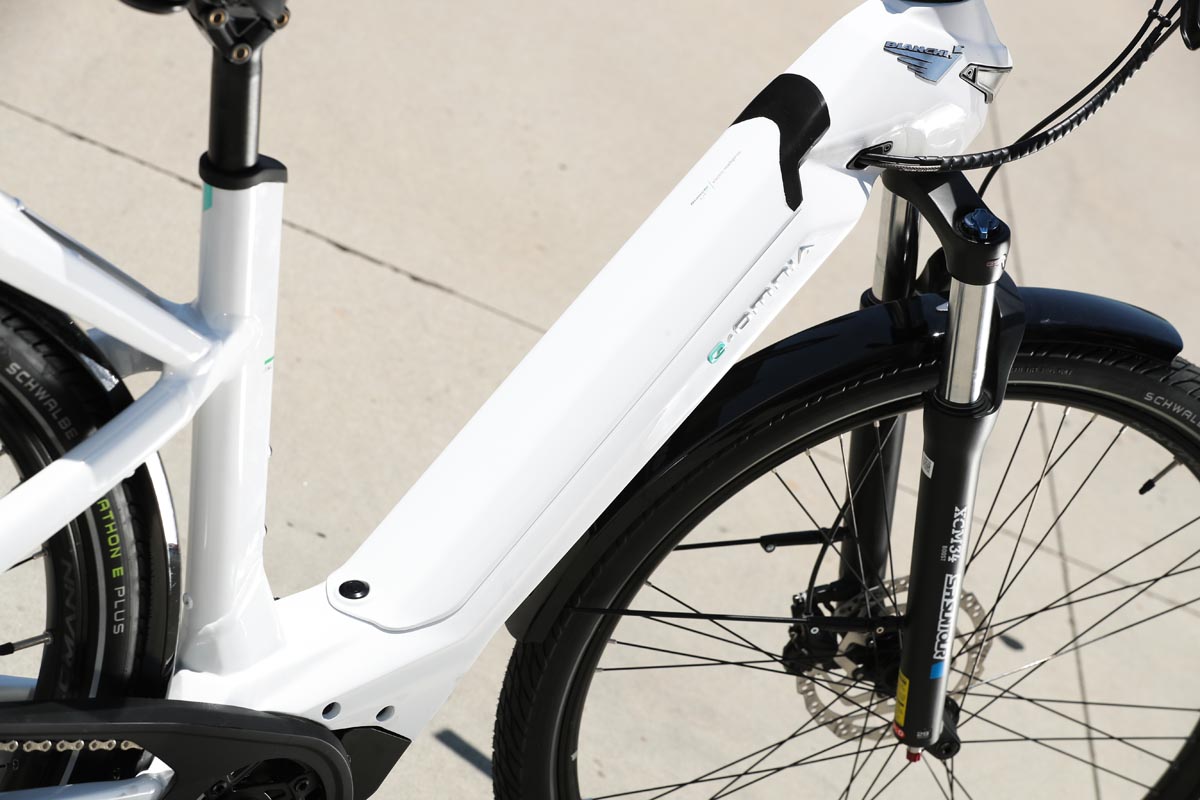 Bianchi has taken full advantage of the Gravity Cast frames to integrate the Bosch PowerTube batteries. All models include options for a 500w or 625w Powertube battery, and select models also get the option of a dual battery for even longer range.

What Bianchi ebikes will be available in the U.S.? 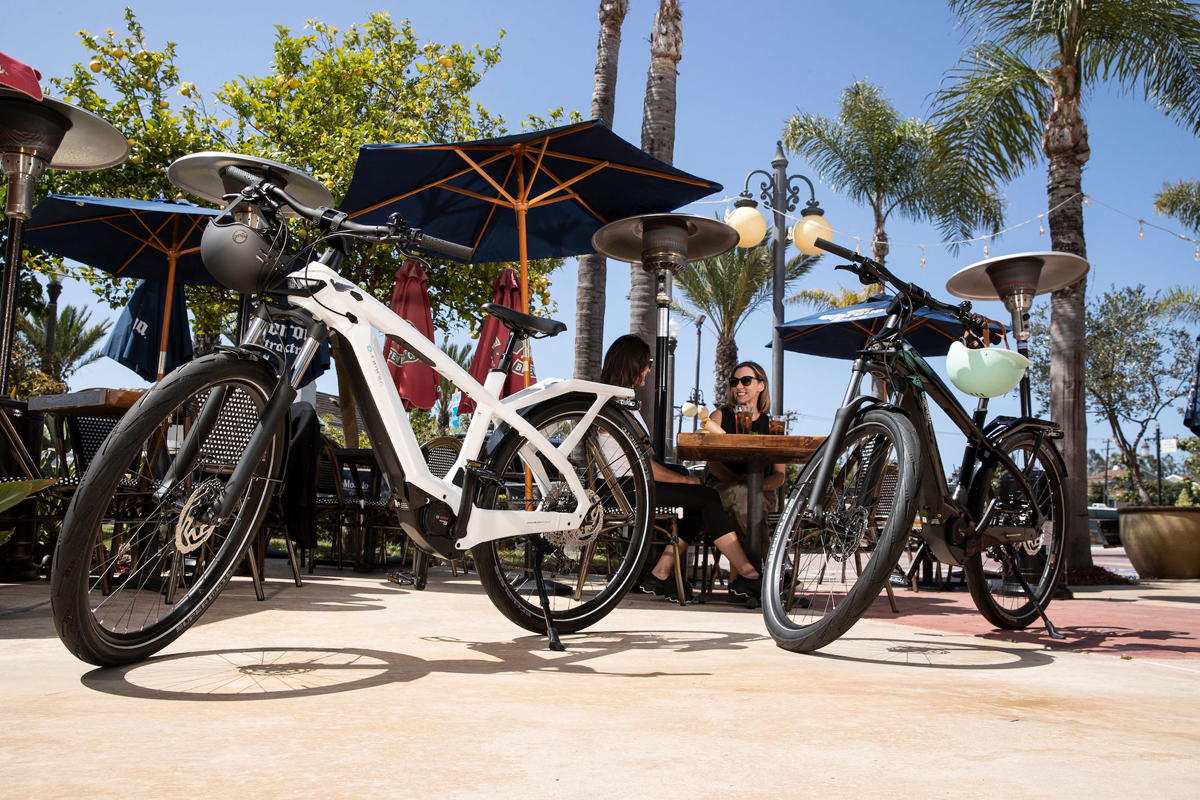 Bianchi first unveiled the e-Omnia line in Europe since, well, e-bikes are still more accepted over there. Because of that, the U.S. will see a smaller selection of the e-Omnia range (it’s worth noting that Bianchi will continue to offer existing models like the T-Tronik e-MTB, and Aria e-Road bikes for now). That means just three e-Omnia models for now, but much more to come from the sounds of it. “This is the beginning of a shift for Bianchi.” Just don’t expect Celeste to go anywhere. 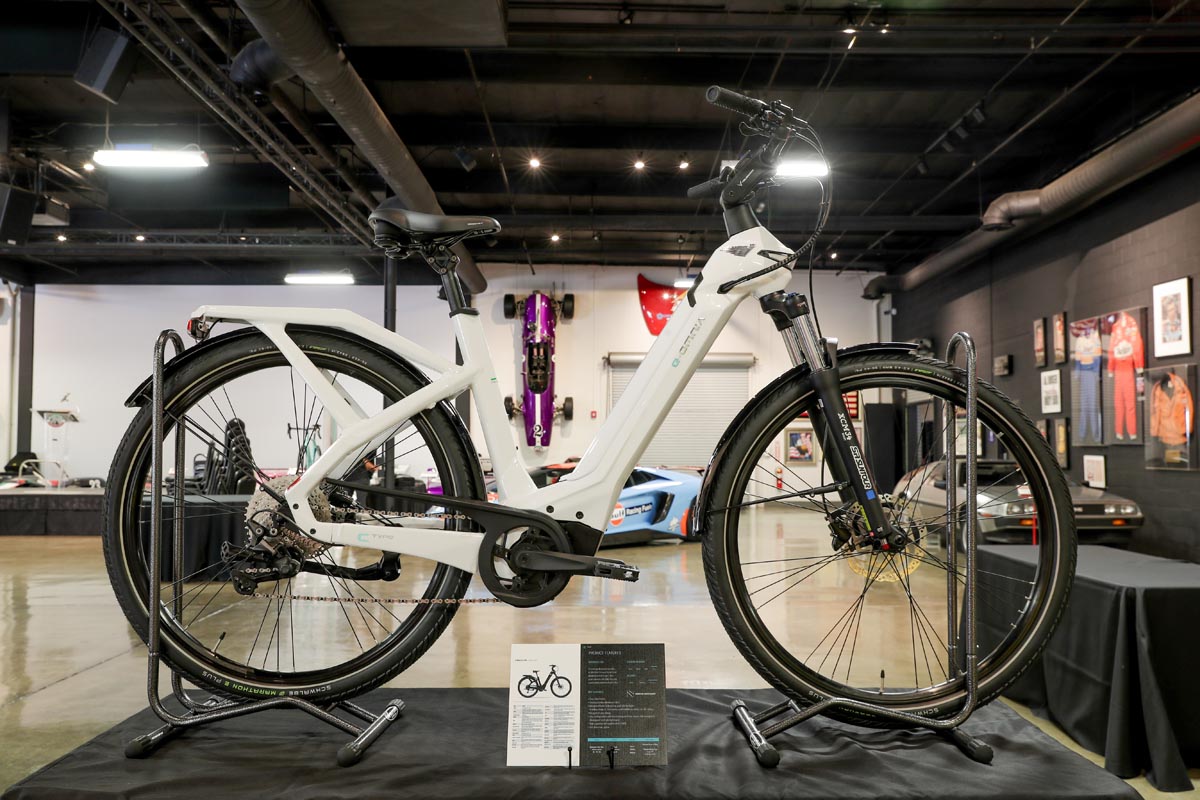 Designed as a fully featured urban commuter, the C Type is offered only as a Gravity cast aluminum frame with a step-through design. The bike includes integrated lights, fenders, a rear rack, chainguard, and an included kickstand making it ready to go, right out of the box. 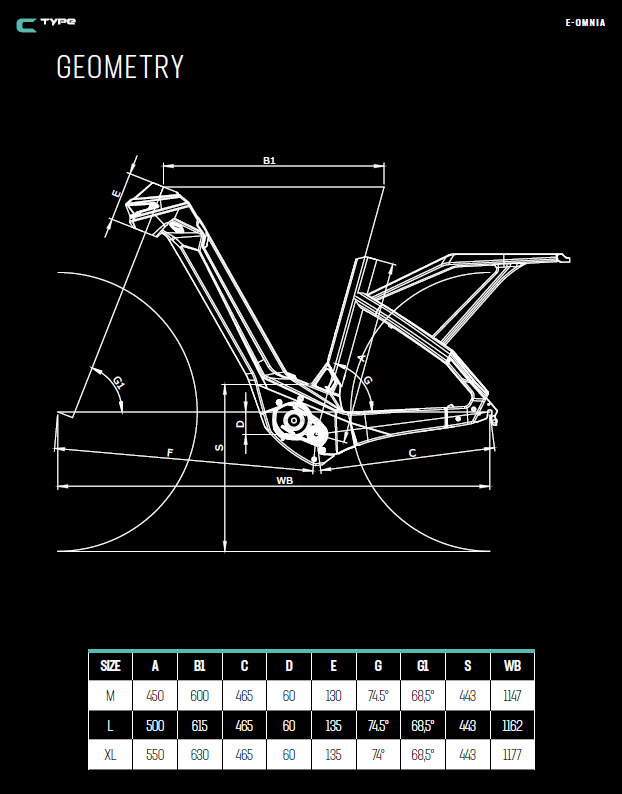 Offered in three frame sizes, complete bikes include a single option with a 1×10 Shimano Deore drivetrain, Schwalbe Marathon E-Plus 29 x 2.15″ tires, and the 625Wh battery for $5,700*. 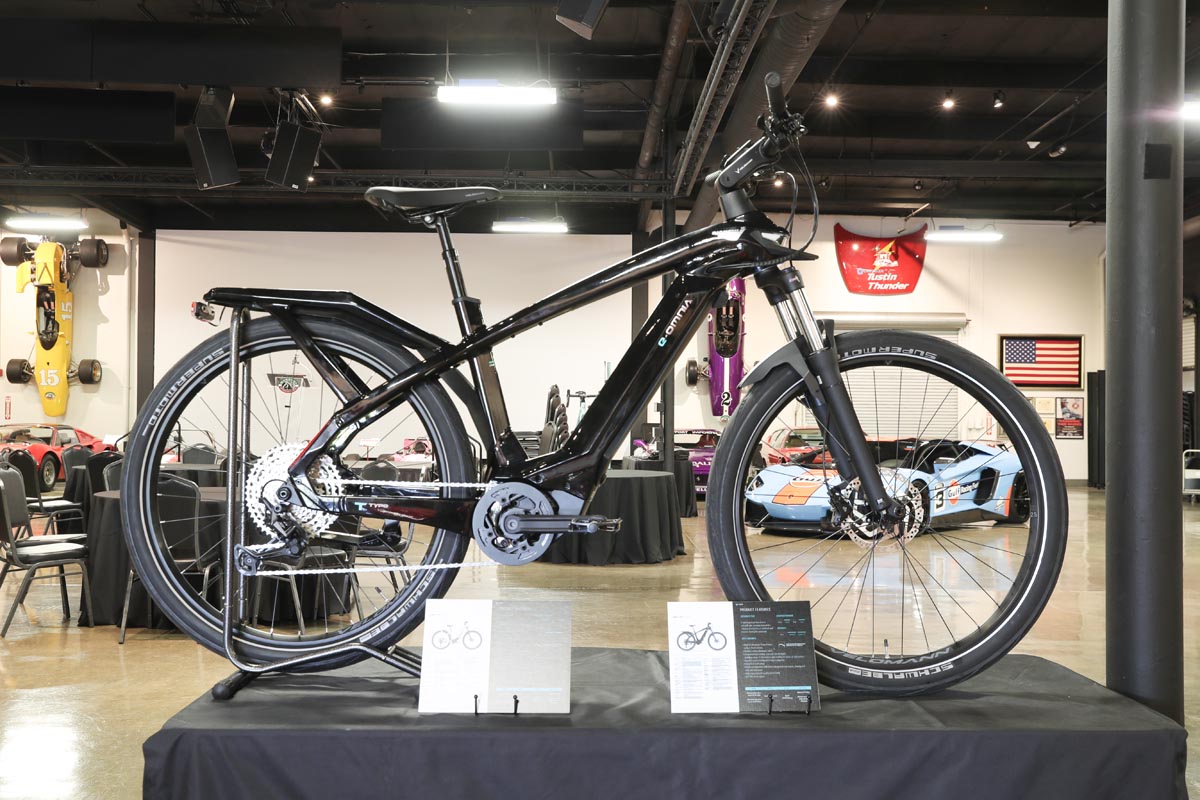 The T Type is a similar bike to the C-Type, but with a few additional options. That includes a Gravity cast frame in both a “men’s” and a “women’s” step-thru design. That frame design includes the integrated fenders, rear rack, lights, and kickstand. 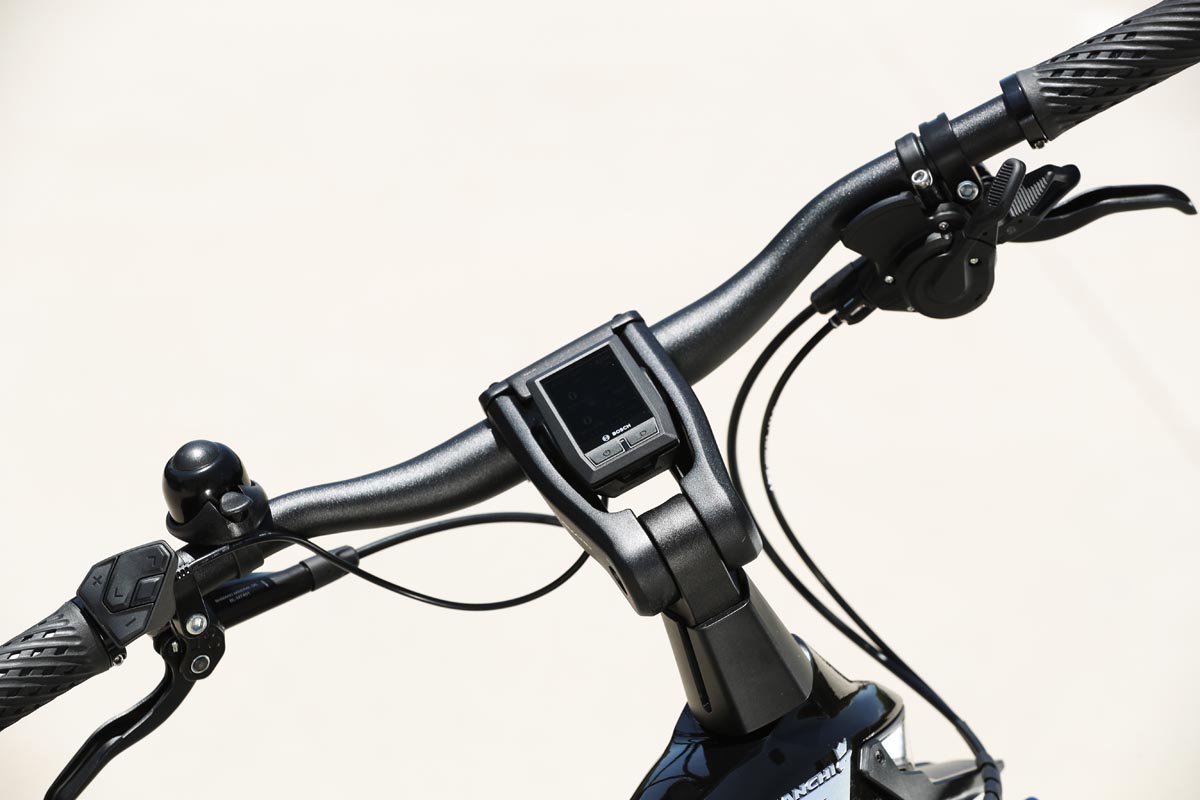 T Type models gain a special adjustable stem which is designed to integrate the Bosch display. You’ll also find improvements in the spec including a suspension seat post, and Shimano 1×12 drivetrain. The tires are a bit wider on this model with Schwalbe SuperMoto 29 x 2.4″ on Boost spacing wheels. T Type models also have the ability to run the BluBrake ABS system, but that will not be offered in the U.S. 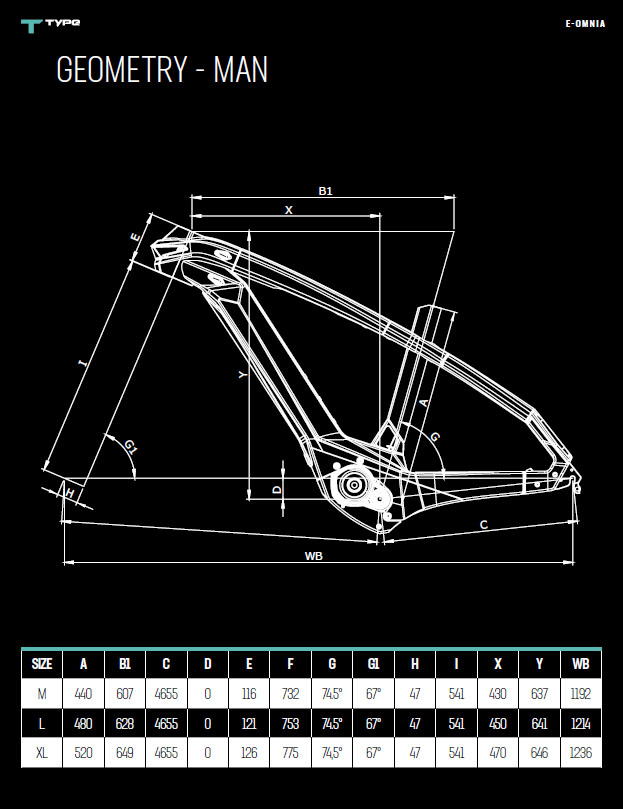 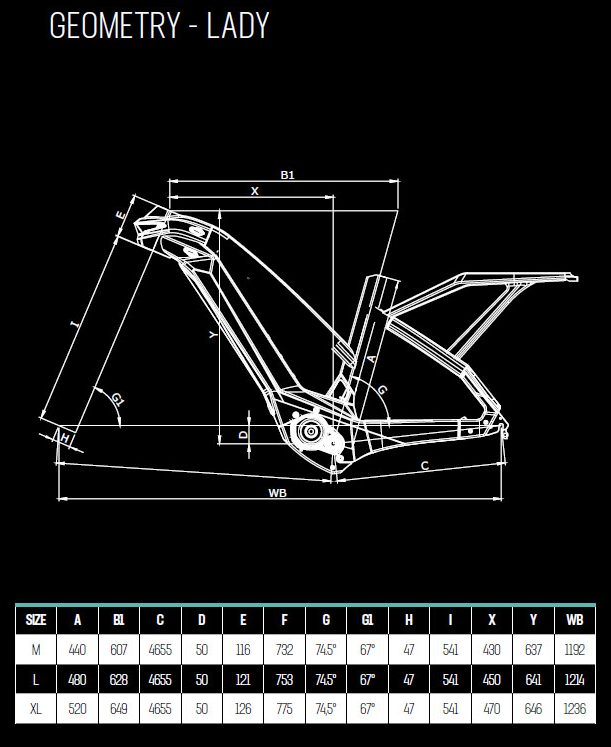 Again offered in three sizes for each frame design, complete bikes in the U.S. will be equipped with the 625Wh battery and are priced at $6,000*. 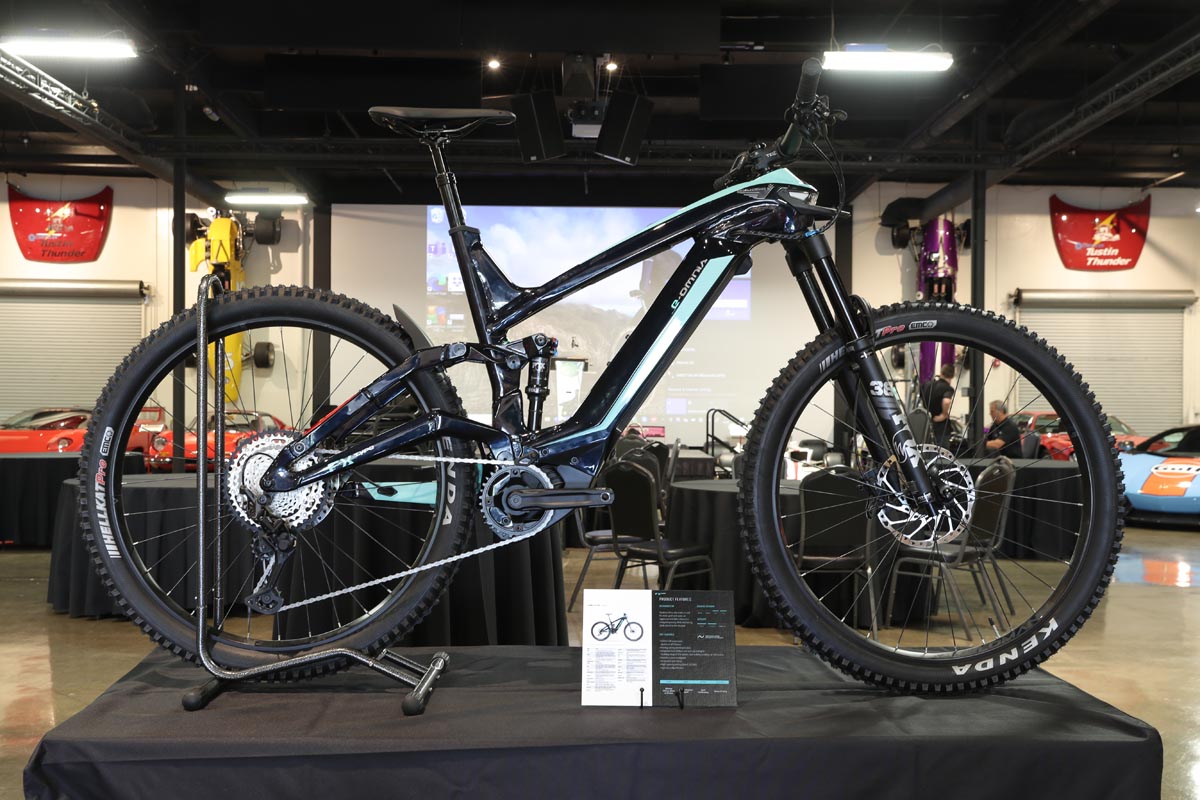 Finally, the FX Type may look like an e-MTB, but its purpose is broader than that. Similar to the e-SUV, but with a broader appeal, the FX Type is a bike that’s meant to pedal through town as much as it is on the trails. Thanks to features like integrated lighting and fenders, riders will be seen and comfortable on their way to the trails, but the legit Fox suspension and MTB components are up for the challenge when the trails get rough. 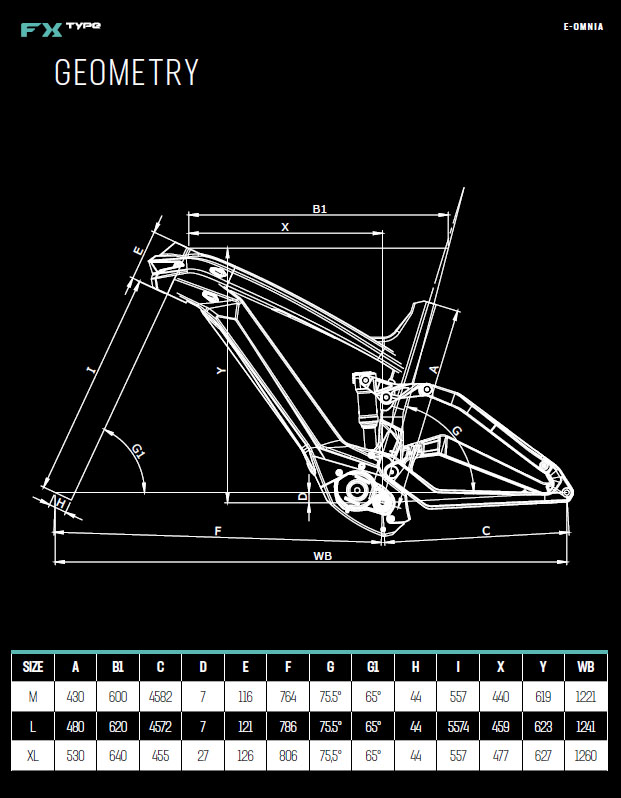 *Prices are approximate, and specs are subject to change. Expect bikes to start arriving in the U.S. by late July/Early August.