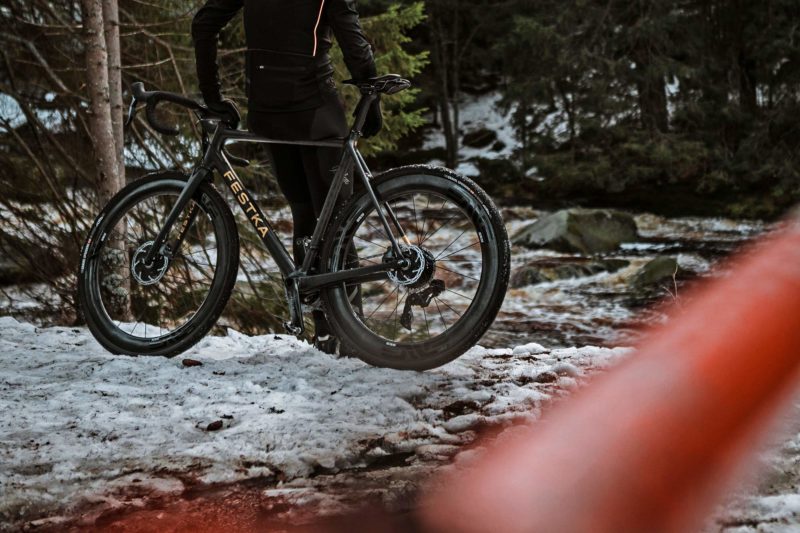 In a statement on what gravel means to them, custom Czech carbon bike maker Festka let leak that an all-new gravel bike is coming soon, developed to scout out new bikepacking adventures. Admittedly a road-focused brand, their bikes have been riding gravel for years. And now their premium fast gravel Rover looks set to get a more off-road-ready bikepacking and adventure bike sibling, the new Scout… Festka has never been one to shy away from gravel, with their uniquely-made Czech carbon CompoTech tubing damping vibrations over all surfaces. Years ago we test rode their original skinny tire, lugged carbon Zero Chrome across the sometimes rough Bavarian gravel of Rapha’s old Munich Prestige, before plenty more dirt roads back home. Plus, over the past four years I’ve used a prototype Festka One Gravel frame that was the precursor of their gravel Rover as a test mule for several generations of Campagnolo & other road, all-road & gravel product reviews… 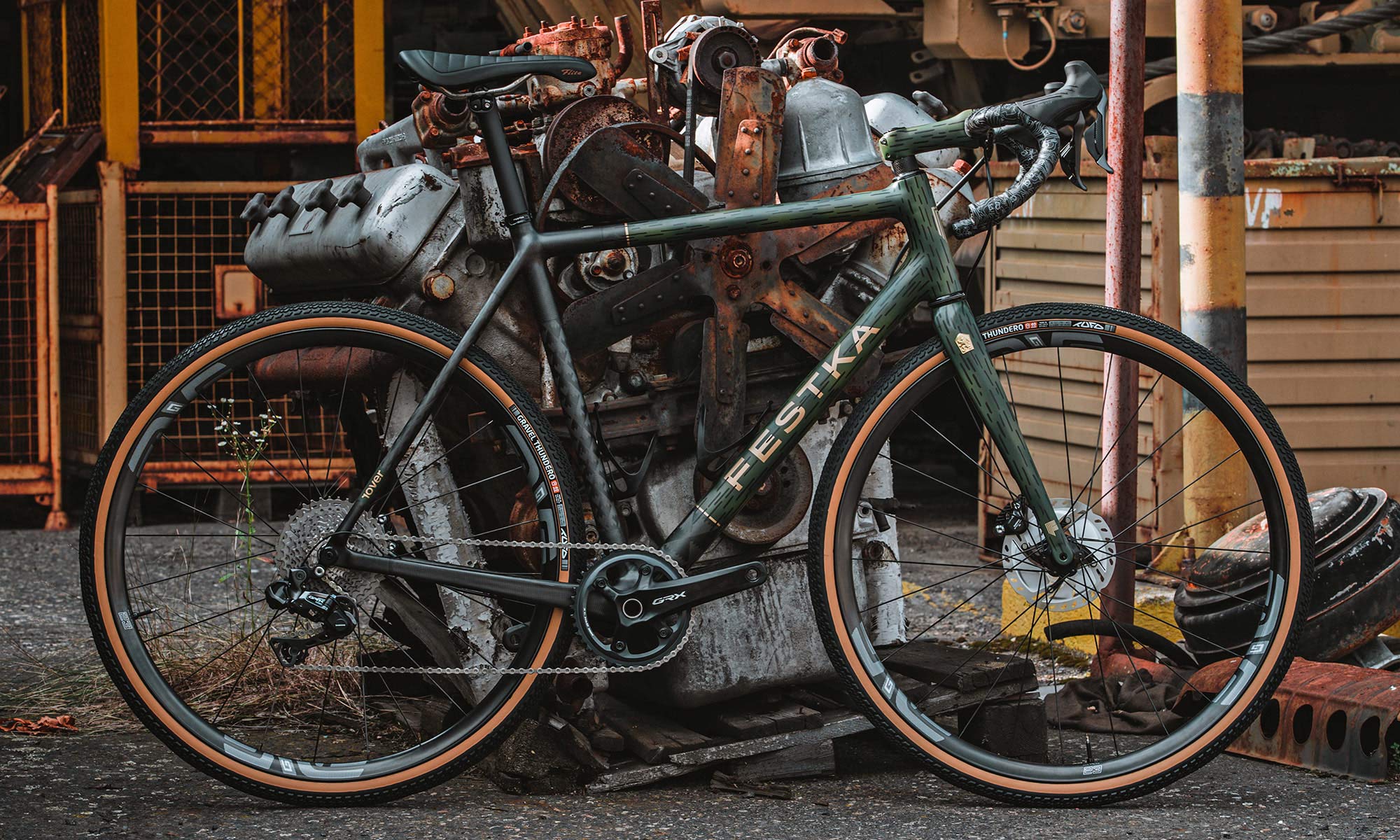 The Rover gravel bike officially debuted in 2018 as an evolution of their road bikes, edging from all-road up to a max 700c x 40mm tire clearance, with the ability to be custom-built with any 1x or 2x drivetrain. 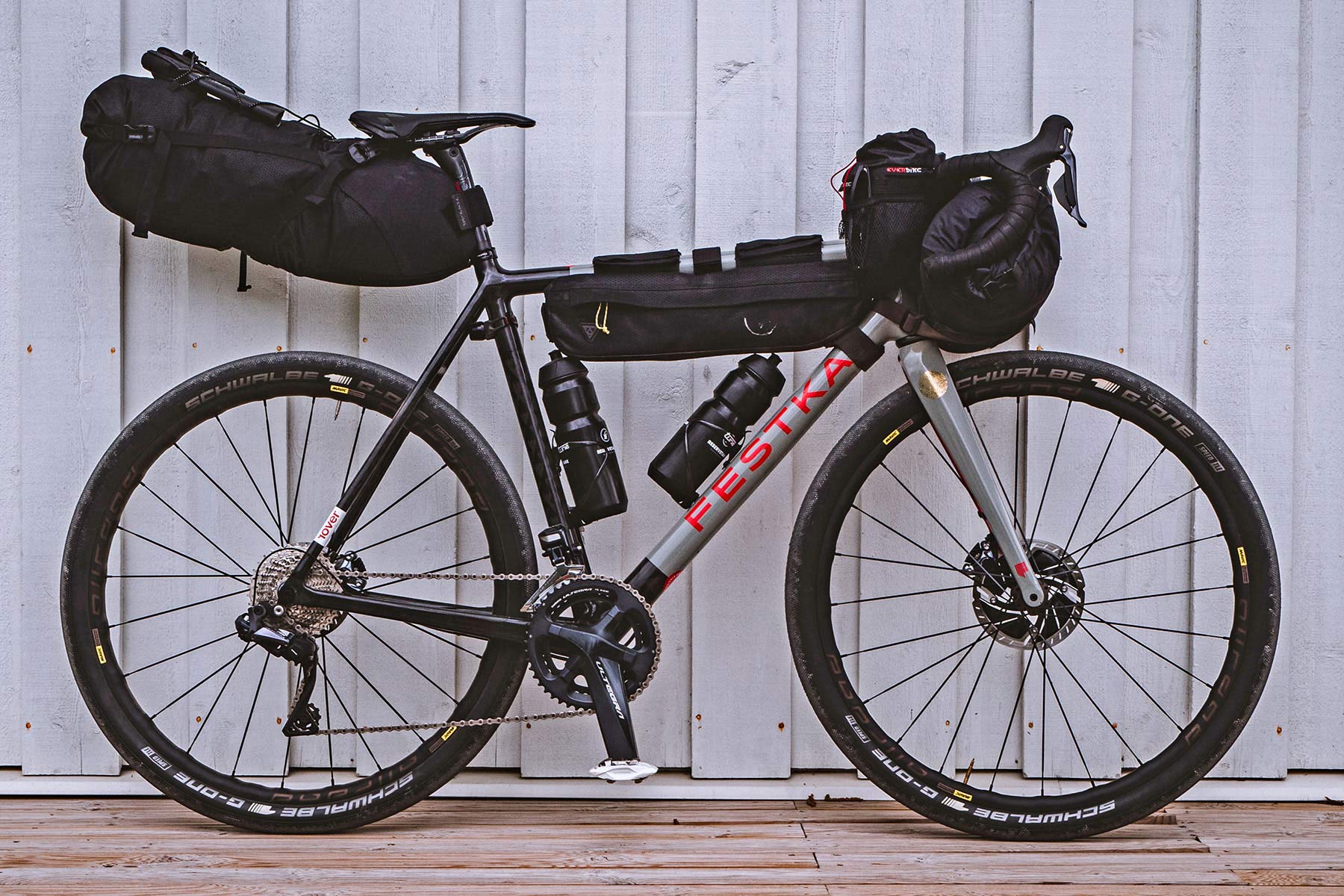 Calling gravel an intersection of road and mountain biking styles, Michael says they’ve learned a lot since the debut of the Rover, concluding that “in order to cover the whole [spectrum] of gravel we needed two models with the second one positioned further away from the road, more towards the off-road and bikepacking.” 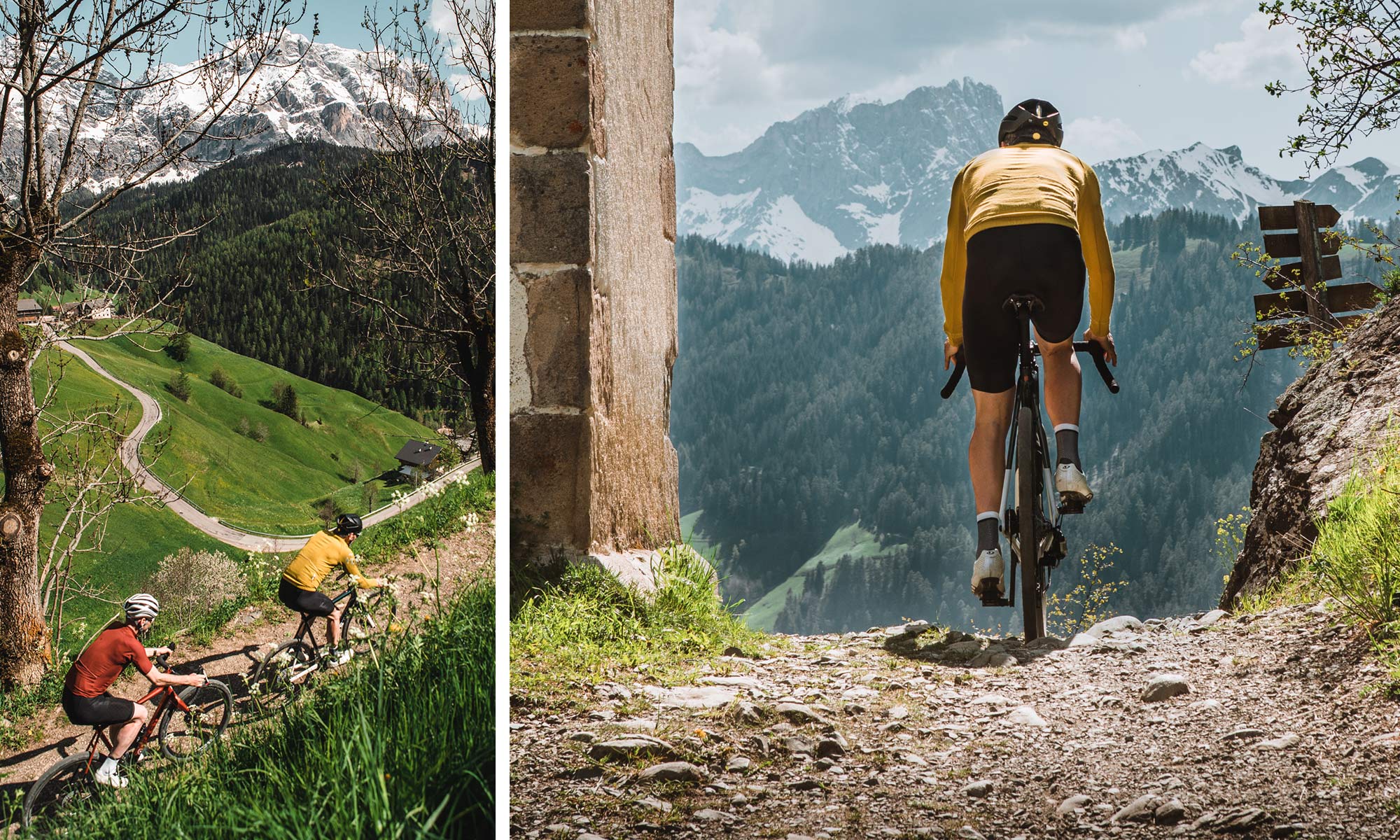 Originally planned to launch late last year, the new gravel bike got pushed back to autumn 2021, giving Festka even more time to fine-tune the details. In fact, they’ve been testing a couple of the new bikes in the Dolomites, ahead of an official debut in the coming months. 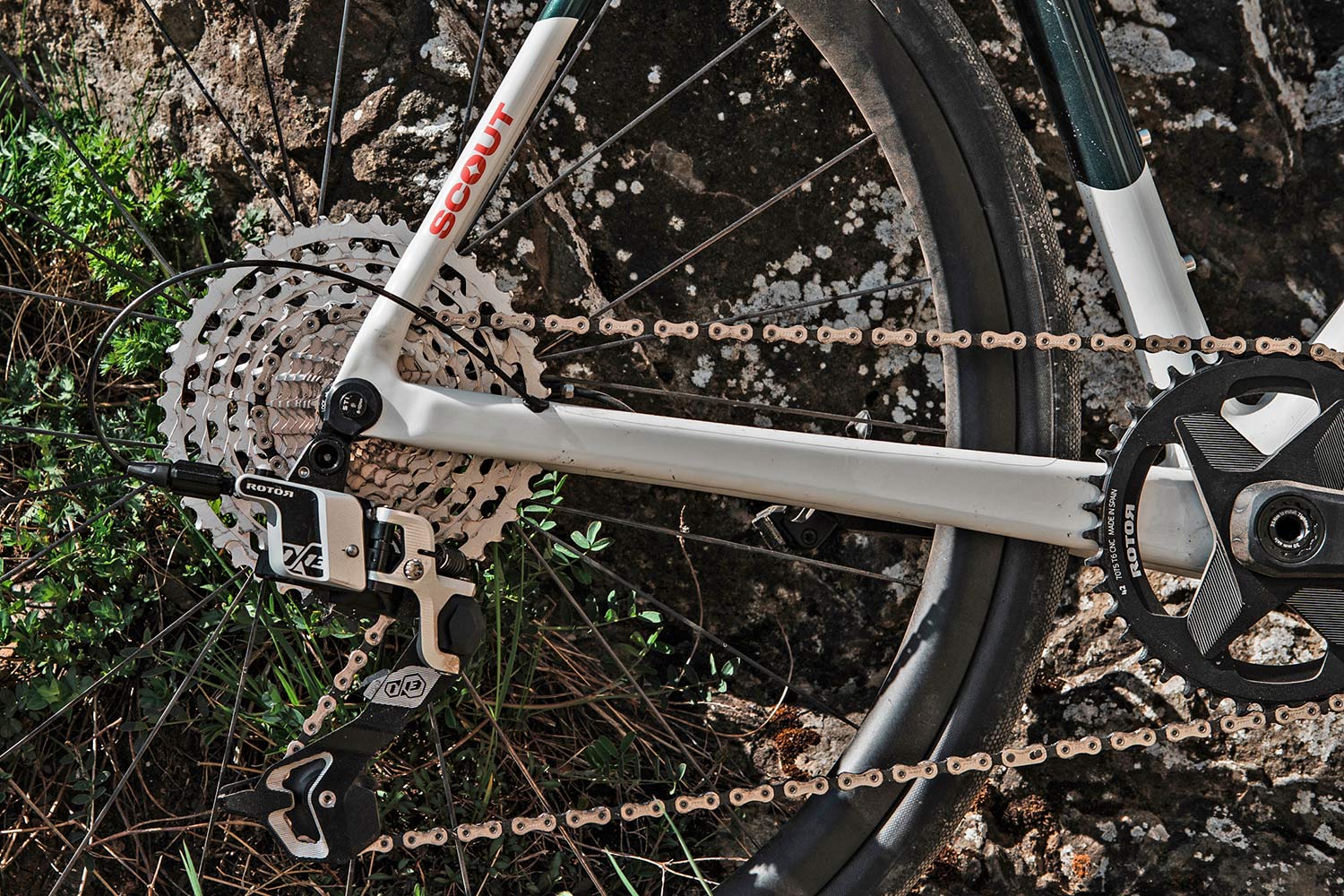 When pressed for a bit more of a sneak peek, Festka delivered some exclusive first look photos. And those then revealed the new gravel bike’s name – the Festka Scout. 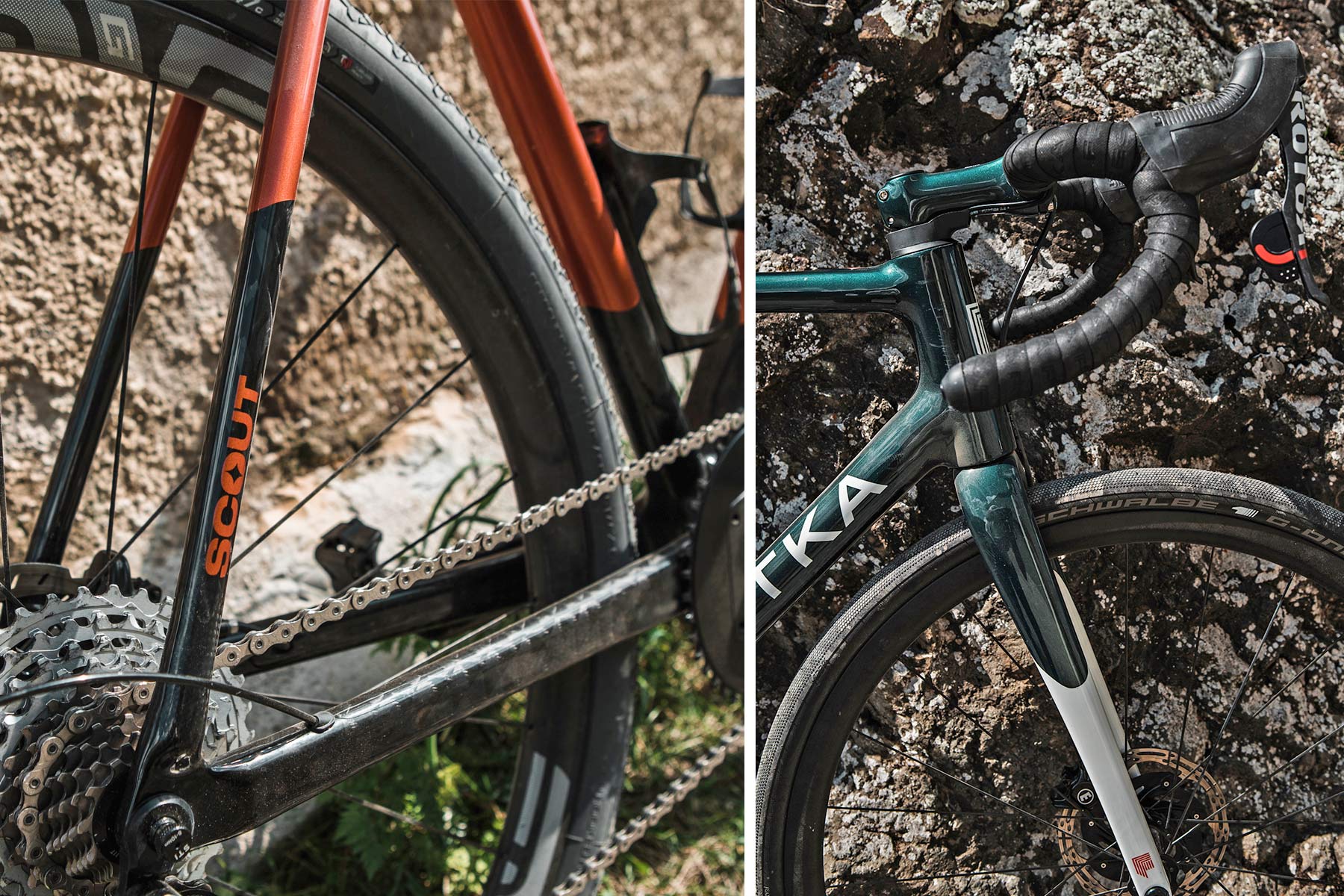 We don’t have many concrete details yet. What we know so far is that the new Scout will focus on more off-road capability, which we assume to mean bigger tire clearance, possibly as high as 700x50mm (?), but definitely consideration for both 700c or 650b build options.

One other interesting note is what looks like a 1.5″ upper headset cup. That allows for fully internal cable routing for the rear brake & shifter, still with a conventional stem and handlebar, keeping cables out of the way of bikepacking bags. The fork appears to be the full carbon Columbus Futura Cross with its adjustable offset dropout, but does not (yet?) have internal front brake line routing. There is however also a Futura Cross+ model that would add anything cage mounts & dynamo routing if needed for your new Scout.

Surely there will be options for electronic builds too, but every Scout teaser we’ve seen so far has either hydraulic or mechanical groups, with an idea of exploring deep into the backcountry, off the beaten track.

(It also doesn’t hurt that Rotor & Campagnolo groupsets are manufactured in Europe, making them less impacted by industry component shortages!) 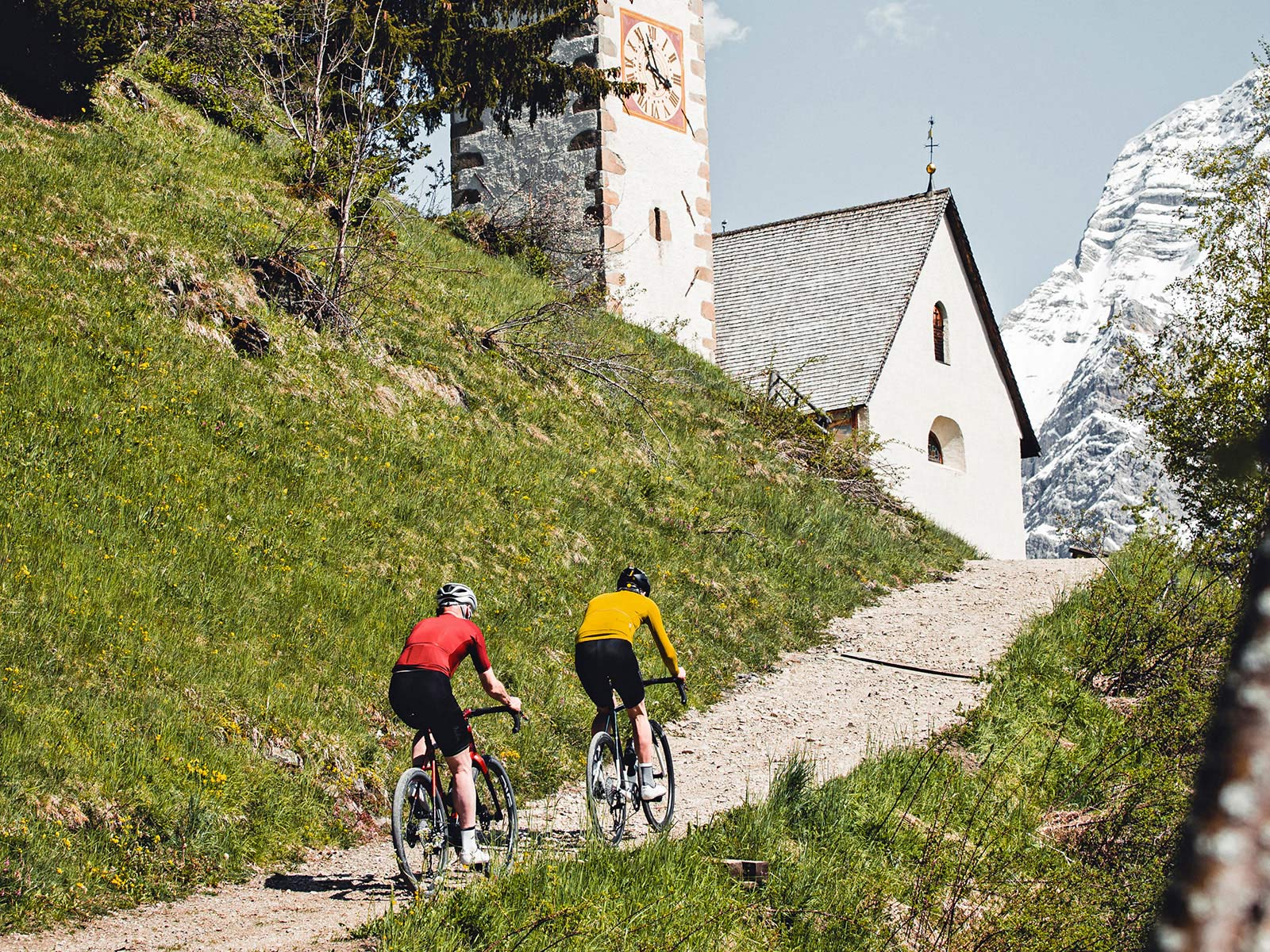 Much of the Scout’s focus will be on exploration and adventure rides, so we expect options like extra downtube & toptube bosses, maybe even specific bikepacking bag solutions. But these bikes will still be custom, so you’ll surely be able to pick and choose what you need for your own style of adventure.

Festka thoughts on gravel as the “new face of cycling” 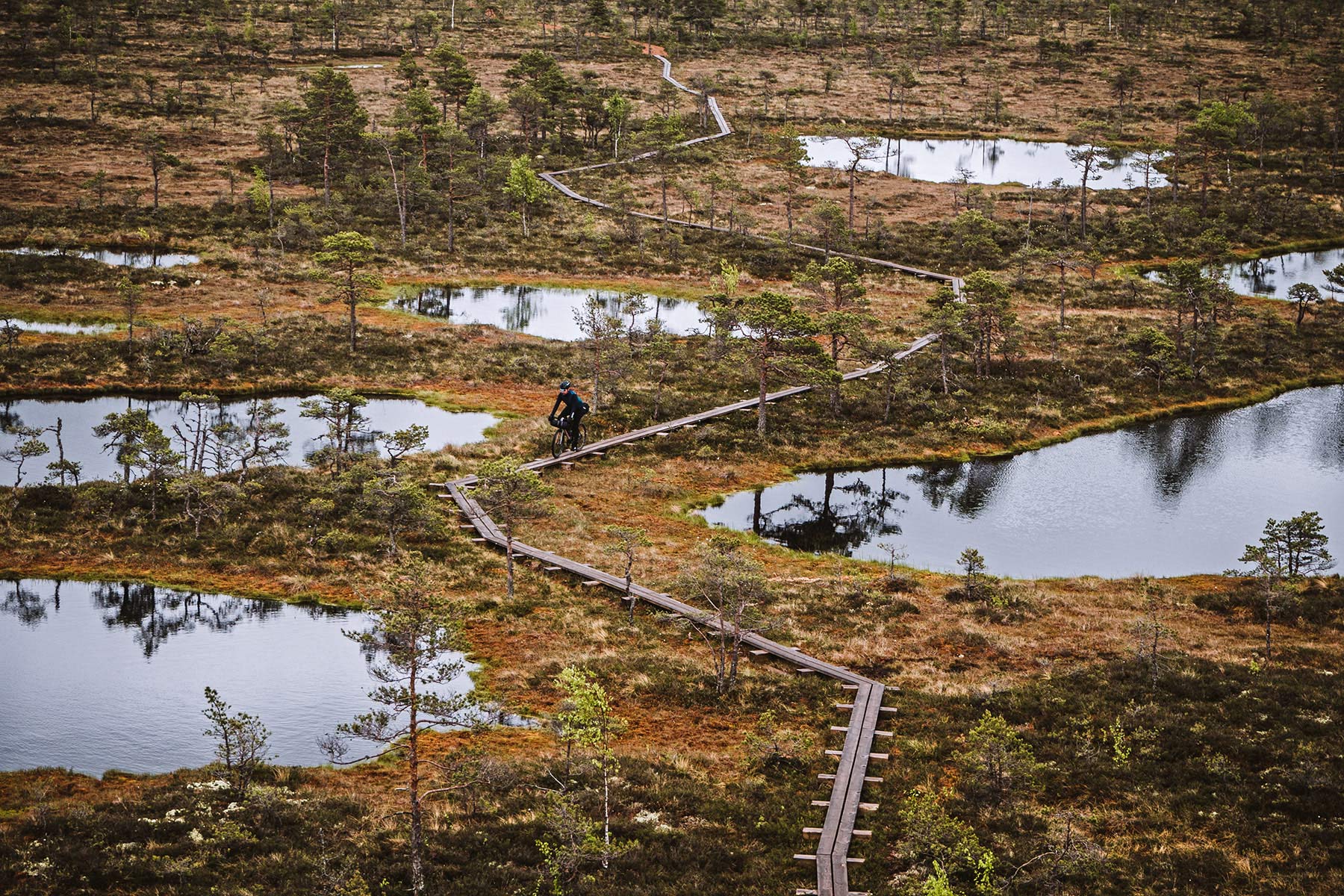 Michael explains how the pandemic has also “significantly accelerated the growth of gravel cycling“, providing an outlet for cyclists that are “all about being in nature, experiencing something different, moving from A to B with a purpose. It’s not about getting somewhere faster than the others.“ 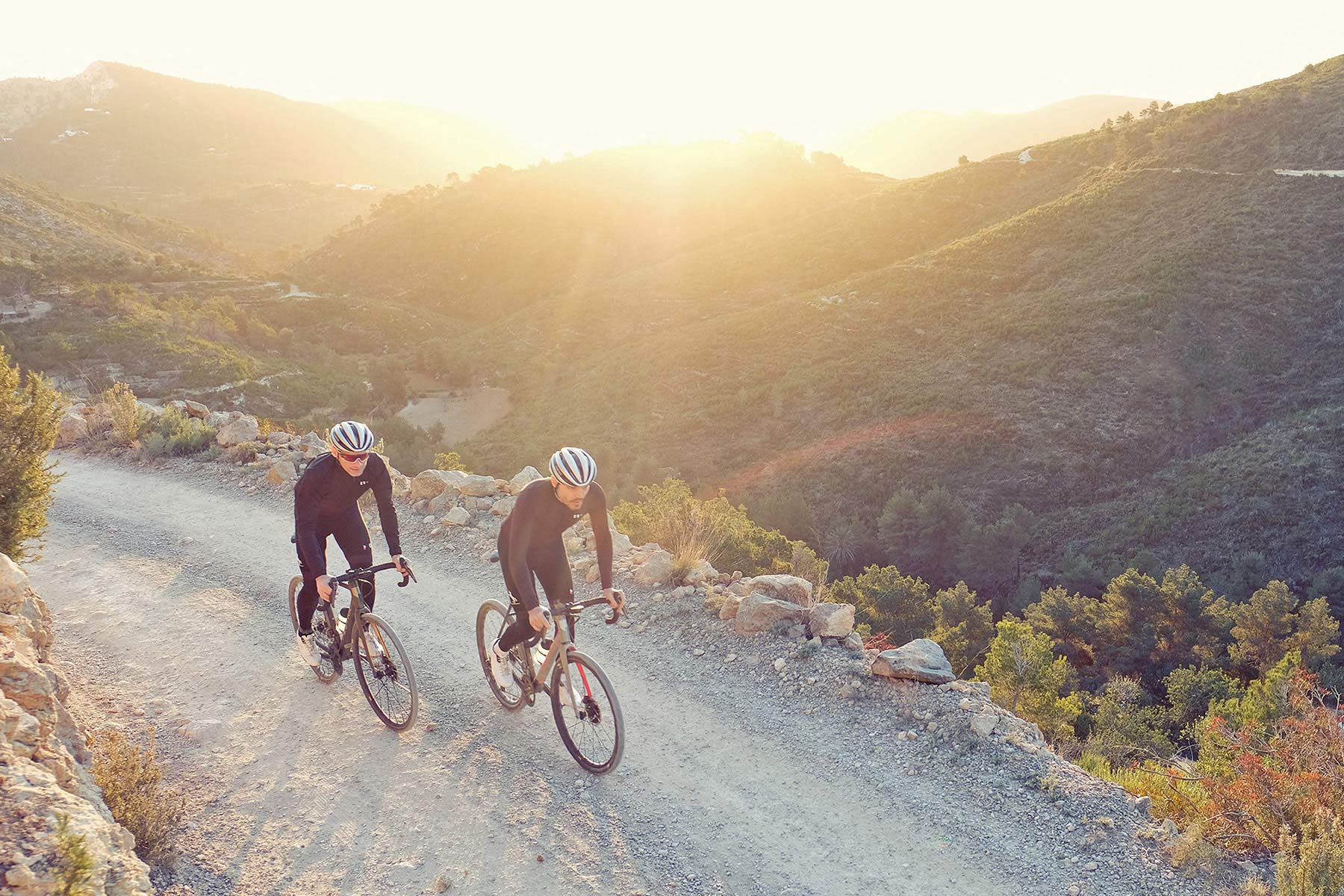 “The pandemic did a lot of good for cycling in general. Many people who would normally do their exercise in gyms and swimming pools had no other option than to run or cycle, and they realised cycling was great to clear one’s head, so you could say that in a way cycling comes out of the pandemic as a major winner.” 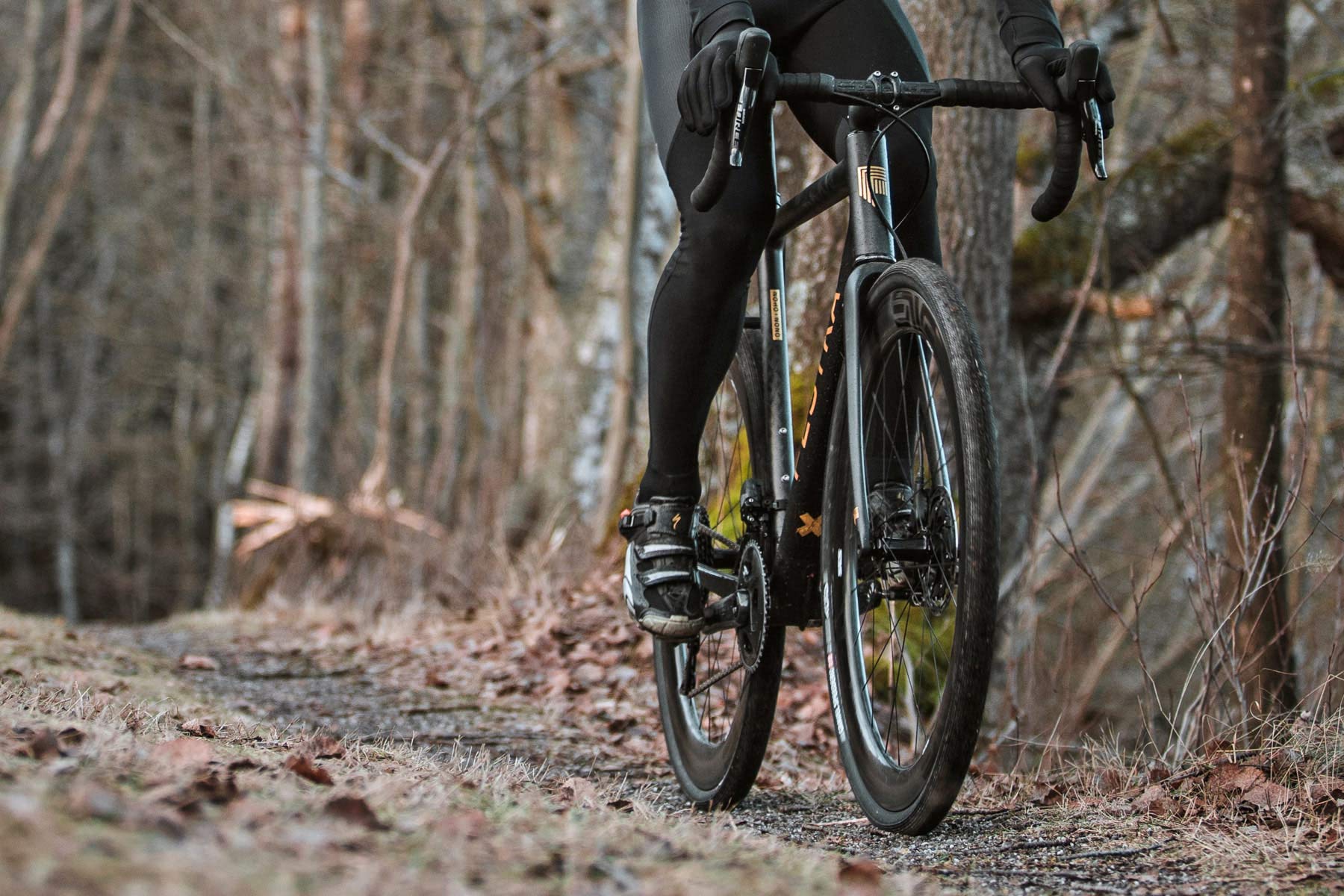 “As with all novelties, the initial wave of interest is driven by plain trendiness. Gravel bikes are all the rage, and they give people the feeling of standing out from the crowd. For many it is their third cycling incarnation. They started on mountain bikes as kids or young adults and later transferred to road cycling because they felt old on MTBs and road cycling was trendy. However, many of them never felt at home on tarmacked roads full of traffic, and gravel bikes offered them a solution.” 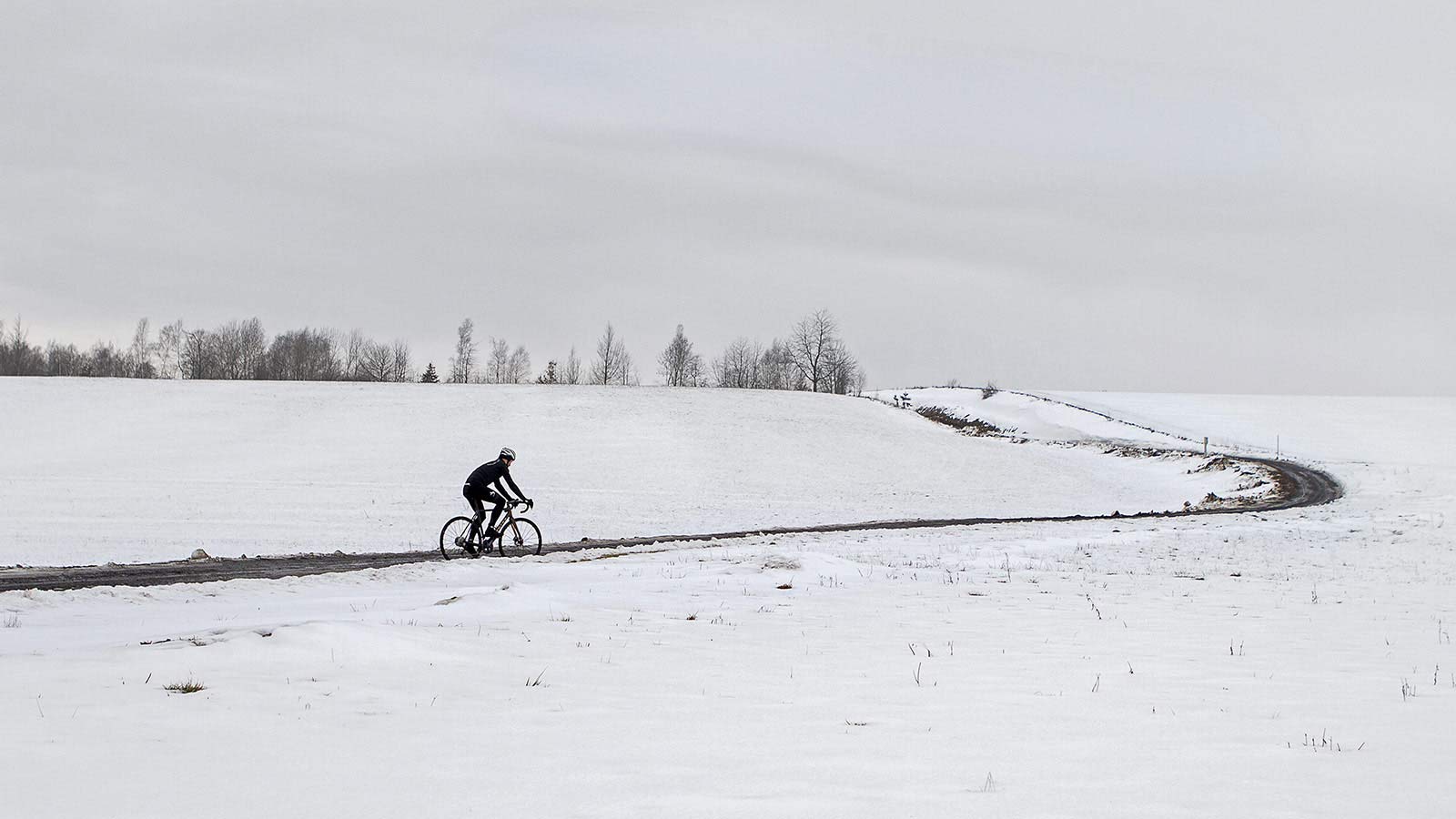 “And it’s not just where you ride and what your bike looks like, but the more casual clothes and shoes that come with it. You can jump on a bike wearing a regular shirt and shoes that you can walk in, while wearing your road gear always makes you look a bit odd off the bike.“