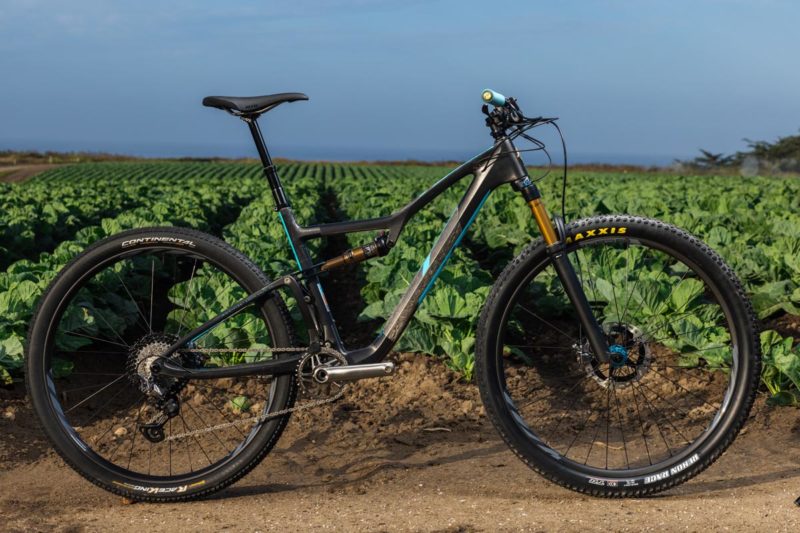 The 40th Anniversary Ibis Exie is ready to fly. Right off the shelves, that is. Limited to just 40 bikes for the riding public, this is a very rare bird that won’t be around for long. OK, technically, there will be 50 Limited Edition bikes out there, but 10 of those have been reserved for Ibis employees, meaning if you want one of the remaining 40, you’d better act fast. 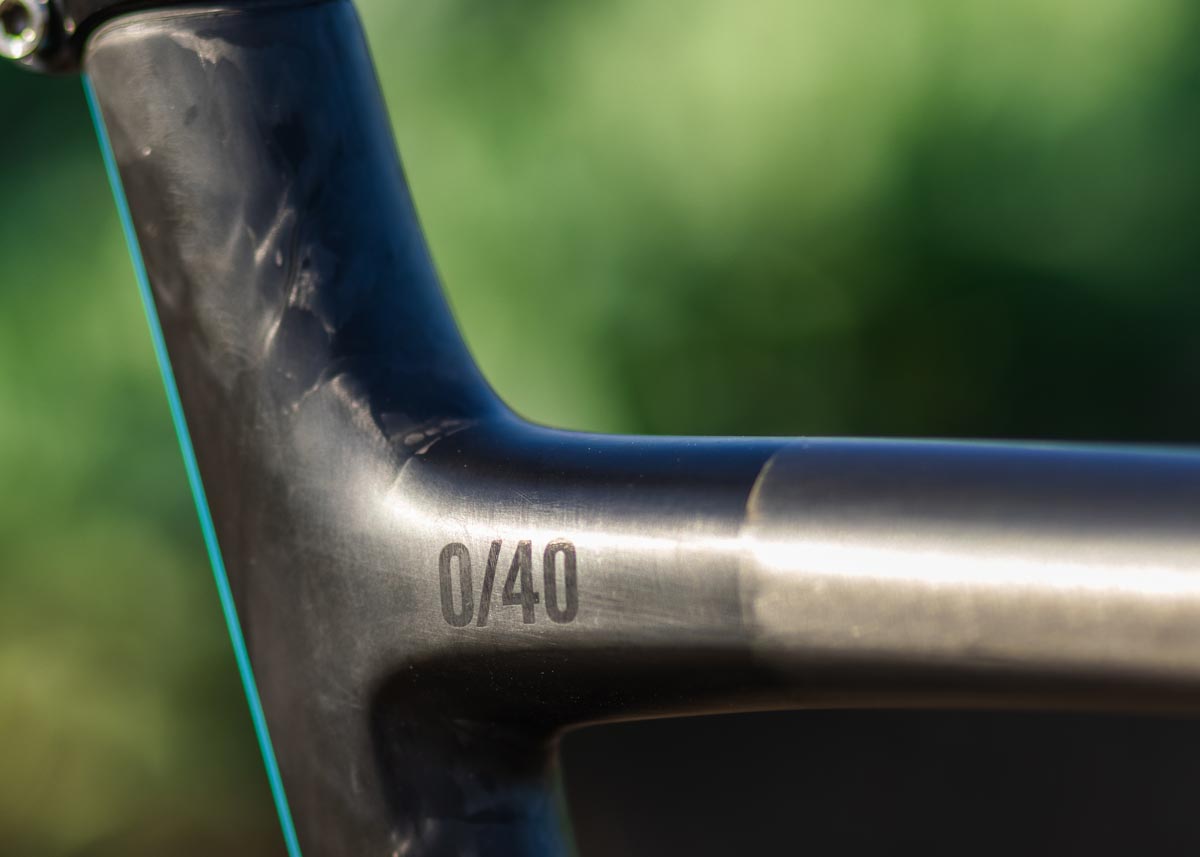 Starting with the new super light 4.4lb, made-in-the-USA Exie mountain bike frame, Ibis has cooked up an exclusive version to celebrate their 40th birthday. Each bike will get the issue number laser etched onto the top tube, with public bikes ranging from 1-40. Those employee bikes will see numbers like 0/40 (for Scot Nicol’s personal bike above) or 41/40, 42/40, etc. 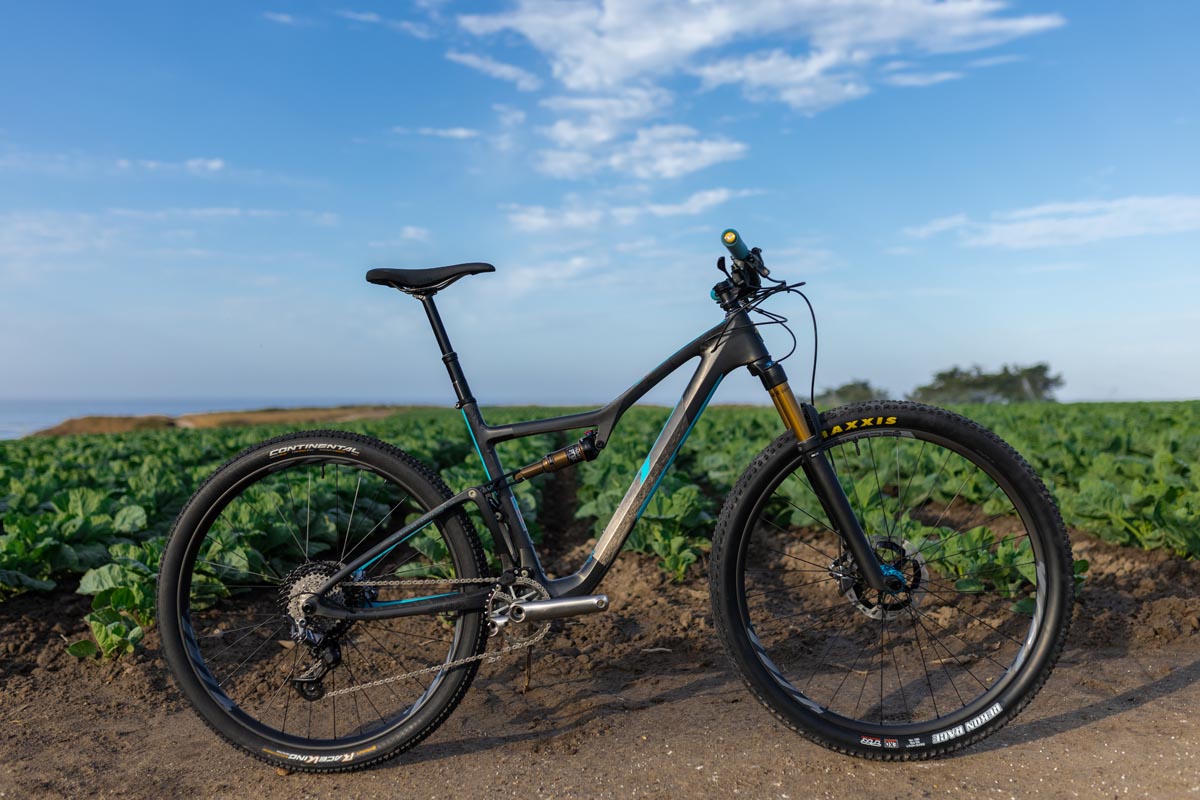 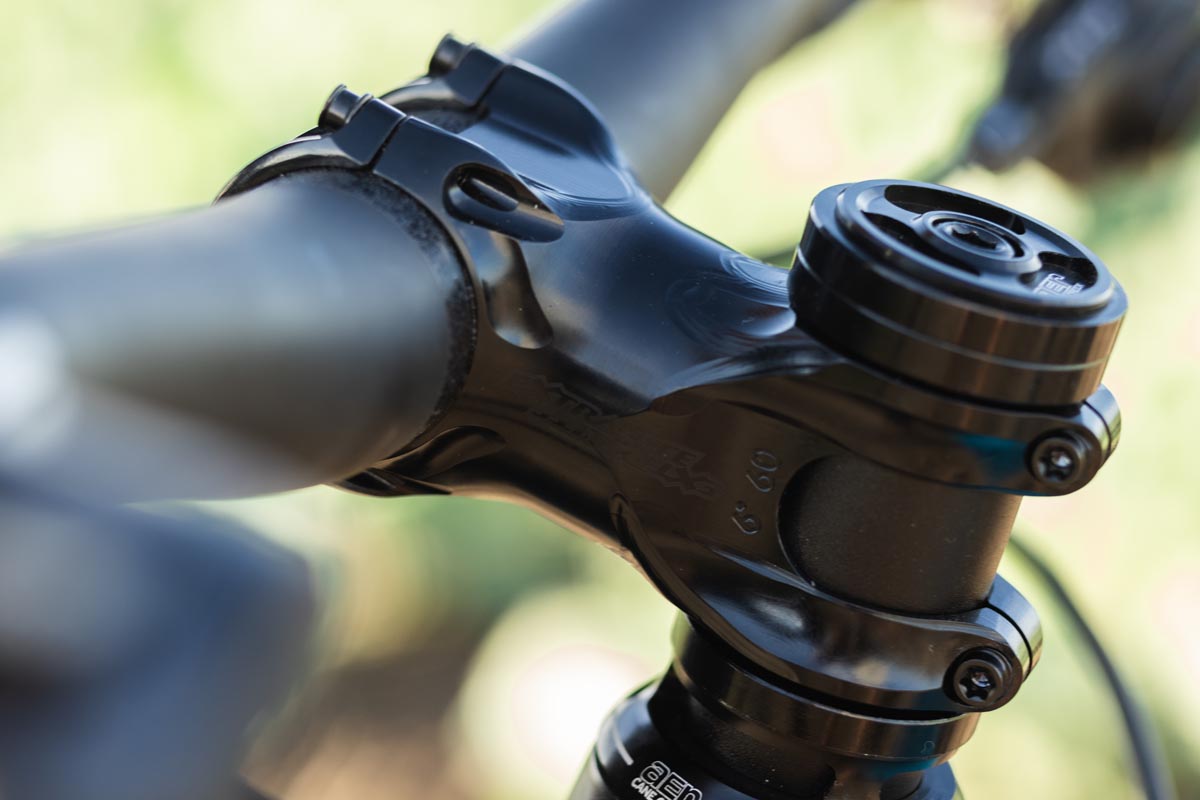 The build kit itself was hand selected by Ibis’ CEO and “Head Weight Weenie,” Hans Heim. Apparently, Hans has put over 4,500 miles on his prototype for the past year testing various components, and this build serves as his greatest hits. That includes a custom Bike Yoke 125mm Divine SL dropper post (typically only available in 80mm travel), and a silly-light Extralight Hyperstem that checks in at just 60g (which is still enduro rated). 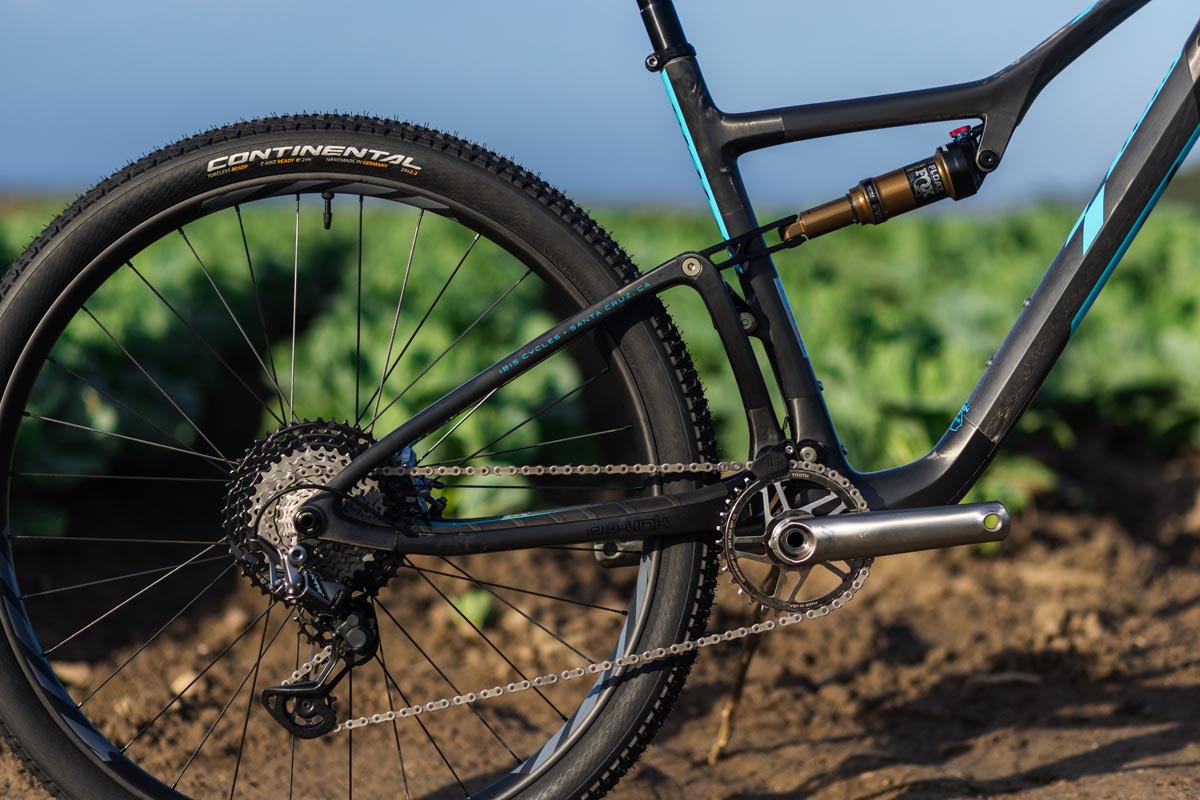 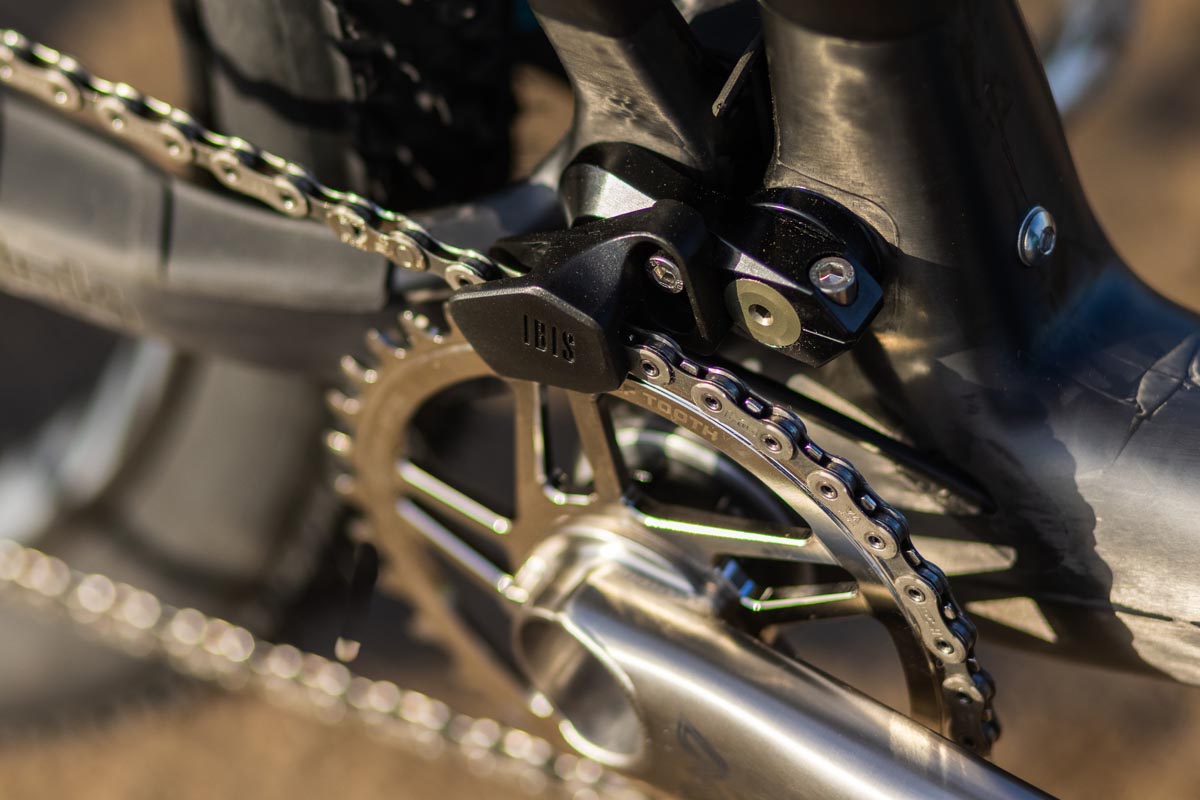 It doesn’t get much better than Shimano XTR for light weight drivetrain performance, though the cranks have been swapped out for the lust-worth Cane Creek eeWings titanium cranks. Apparently, Hans is a known crank-breaker, and has destroyed a half dozen light weight cranks over the years. His Cane Creek eeWings with a Hellbender BB are still going strong though, and spinning smooth and quiet after 4,500 miles. A 34t Wolf Tooth direct mount chainring is a natural choice for the Cane Creek cranks. 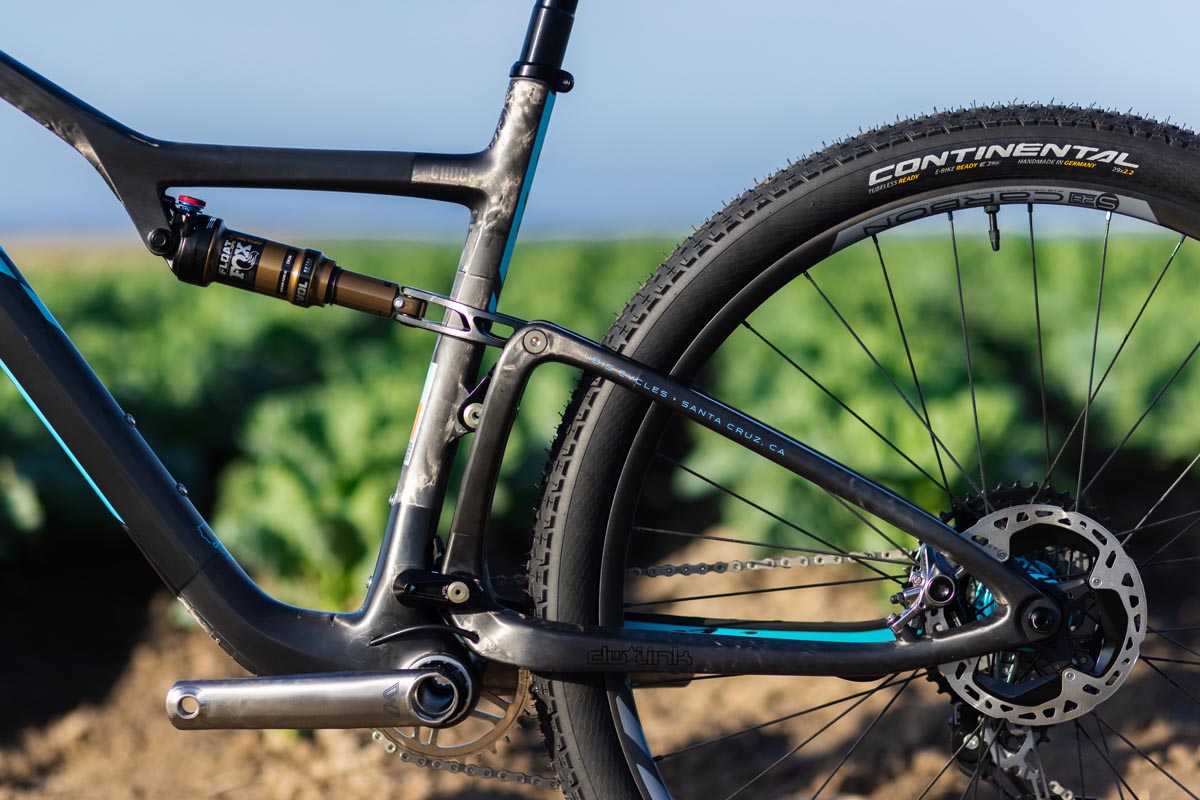 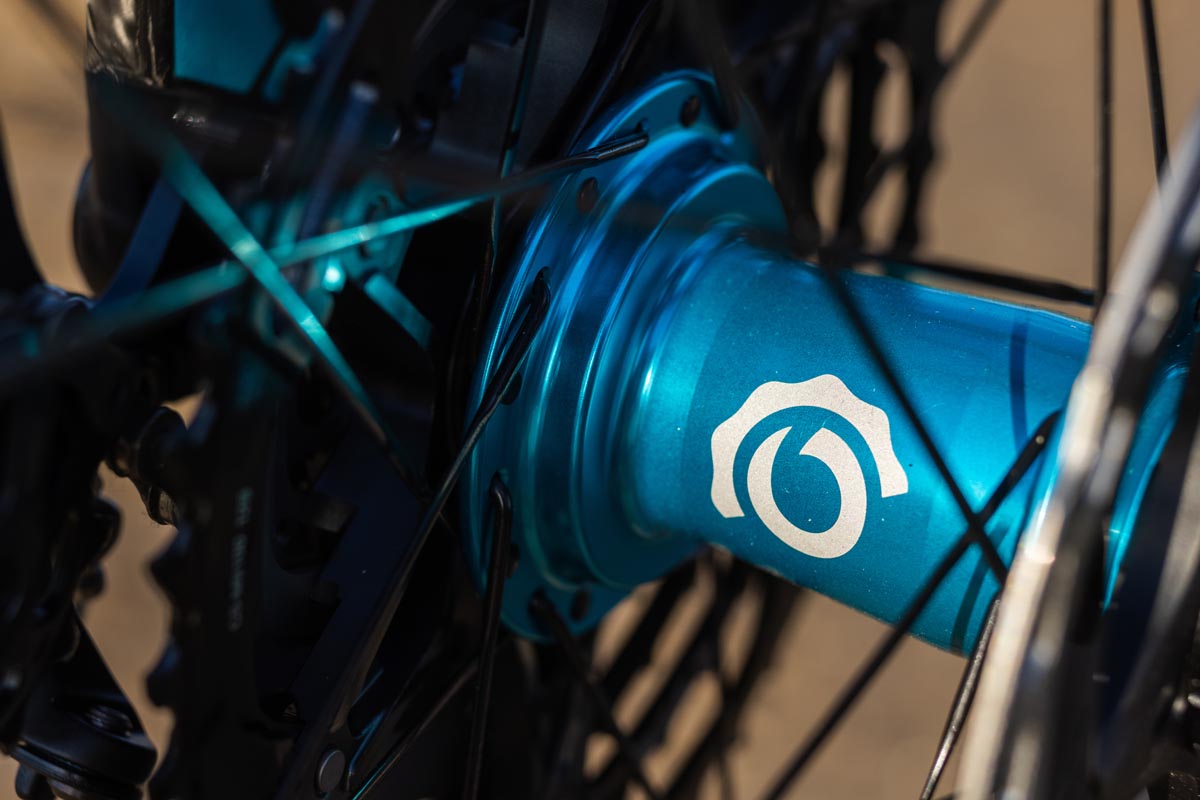 The LE Exie rolls on custom wheels with Ibis S28 carbon rims laced to Industry Nine Hydra hubs in a matching blue. And that mis-matched tire spec? That’s not a mistake just for photos. Hans claims, “the rear of the Exie supports about 65% of your weight, so you can get away with a higher traction and slower rolling front tire as only 35% of your weight is on that end. Our rear tire spec is incredibly fast and saves 10w over similar rear tires. It provides a disproportionately large savings in rolling resistance.”

That means the complete bikes will ship with a Maxis Rekon Race in a 29 x 2.4″ WT up front and a Continental Race King in a 29 x 2.2″ out back. Certainly unconventional, but apparently fast. 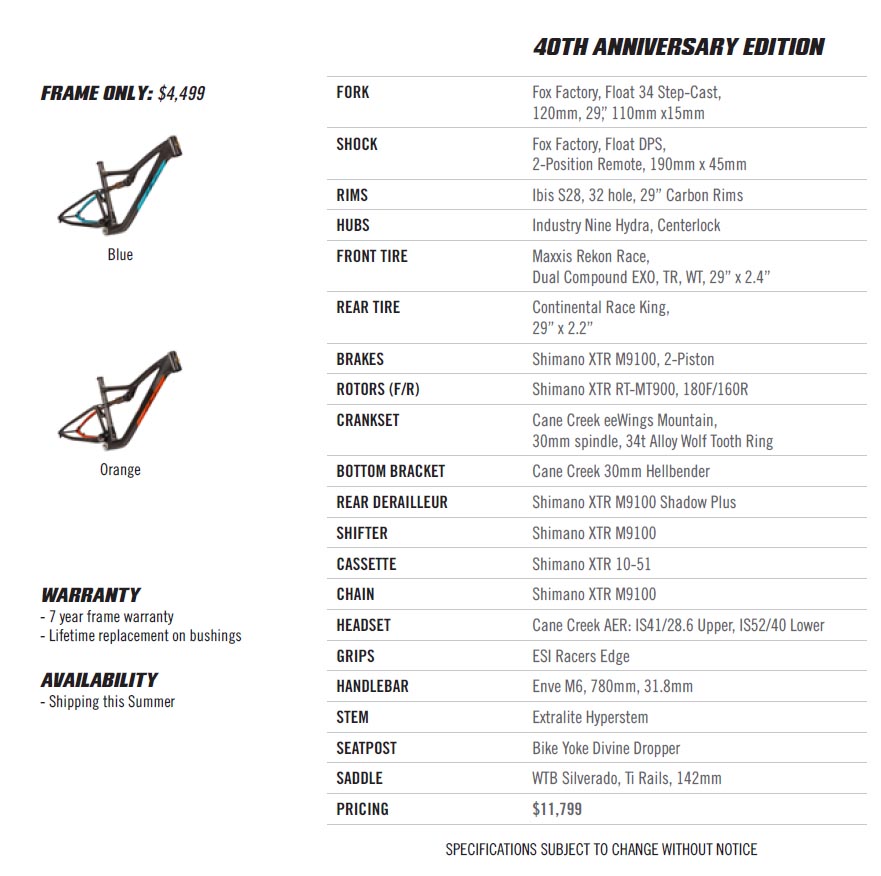 Complete 40th Anniversary builds will include the new Fox Step-Cast 34 fork at 120mm travel and a Fox Factory Float DPS rear shock that offers 100mm of travel out back. If you can find one, the price is set at $11,799 — which is actually $1,000 than their top end SRAM Eagle XX1 AXS build. 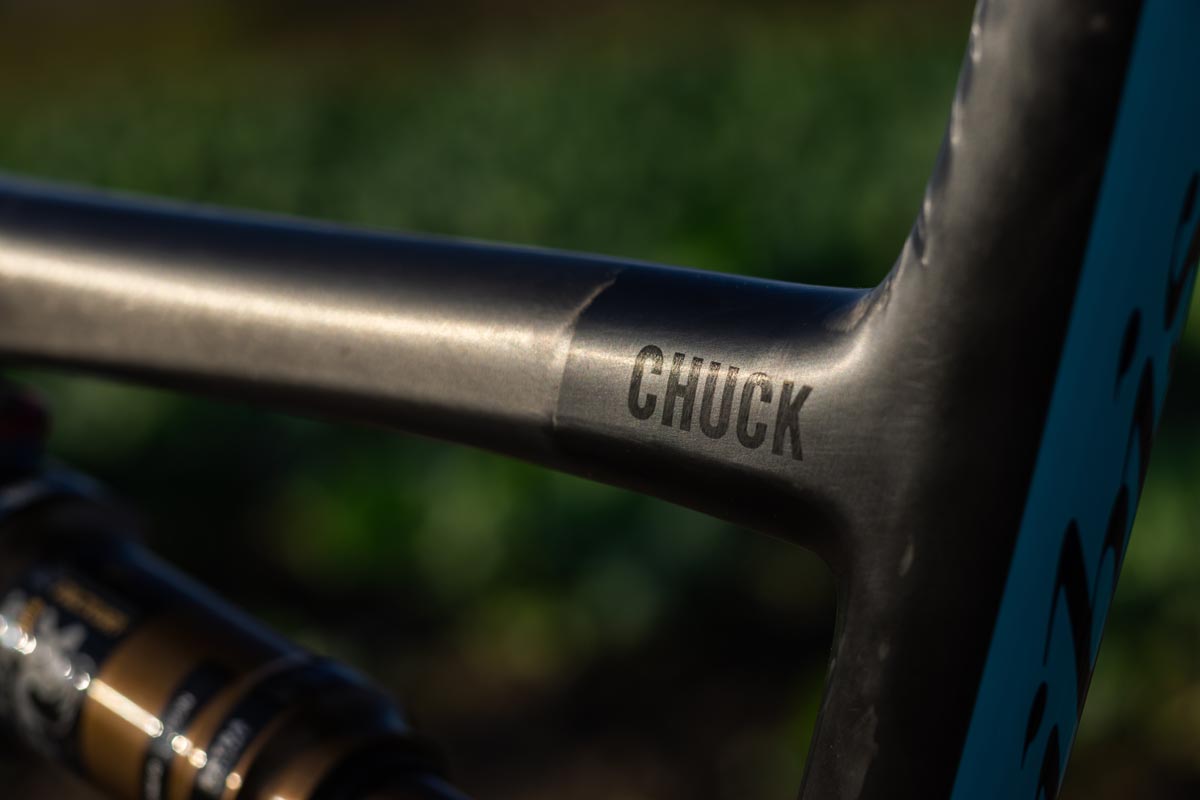 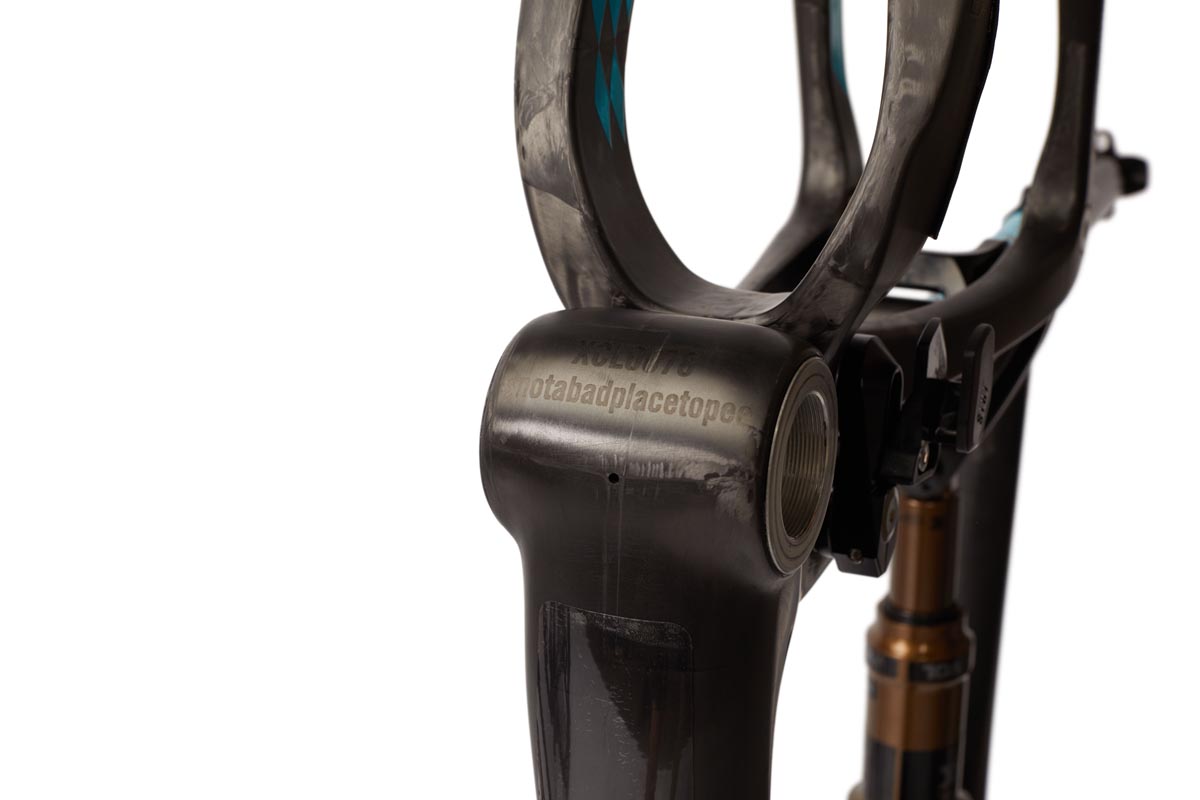 Naturally, Ibis founder and “Director of Good Times”, Scot Nicol got the first bike with 0/40. The team made sure to add a few Easter eggs to the frame though with Scot’s nickname on the top tube, and #notabadplacetopee hidden on the bottom bracket shell. For those wondering, that’s a reference to a text message group of Scot’s friends that often share photos of mountain top pit stops with said hashtag. 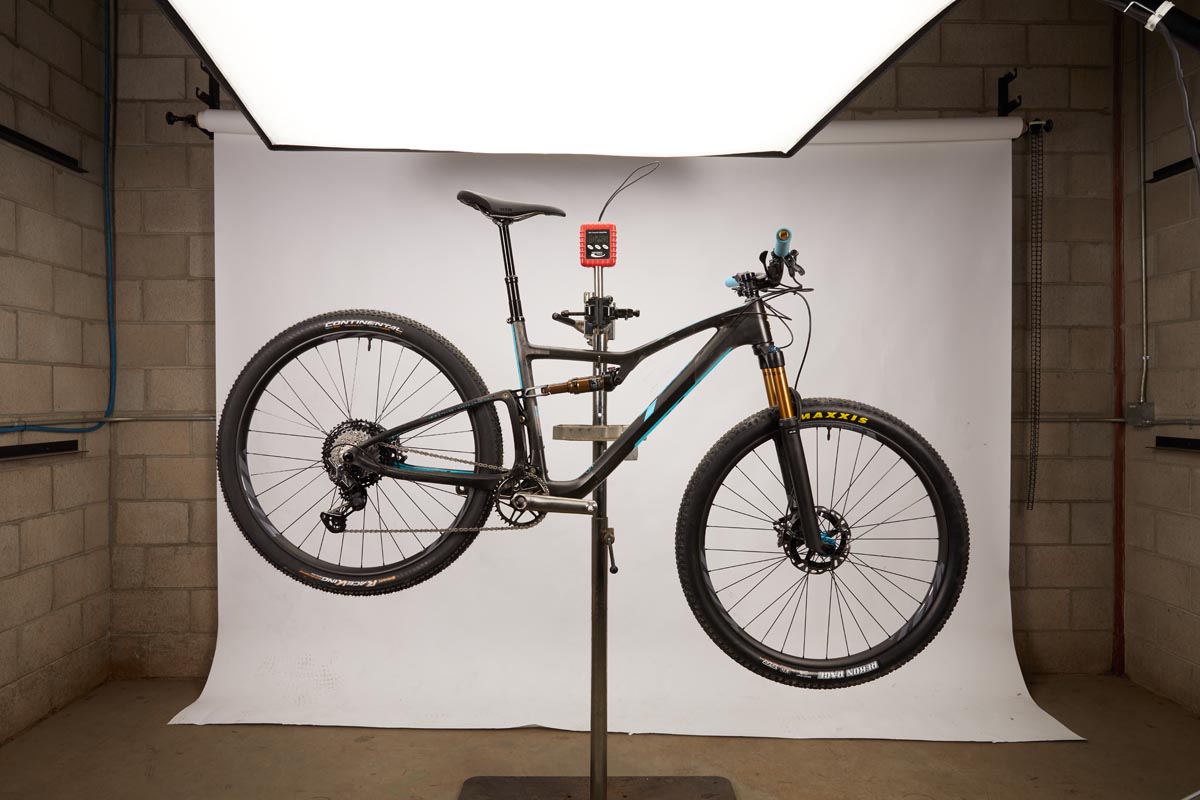 Scot’s personal bike is a large, but weighed above with a 2021 suspension fork. That’s because the 2022 Fox forks weren’t available, but when they are, it will drop 126g from the bike. Ibis claims this one has “a ton of sealant” in the tires, but still weighs just 22.69lbs (10.29kg).

Actual Weights of other Exie Builds 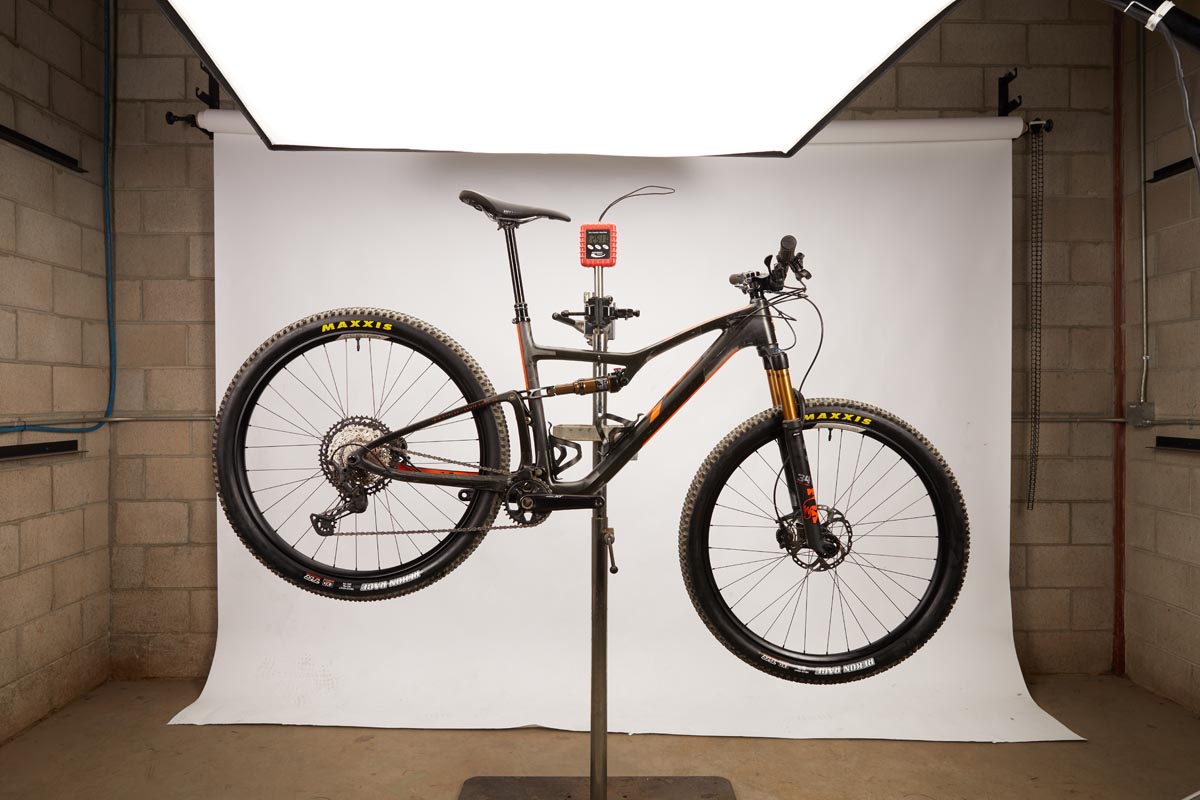 For those curious, Ibis sent over some actual weights of other Exie builds starting with the Large XT build above at 25.11lbs. Note this is with sealant in the tires and two bottle cages which weigh 30g each. 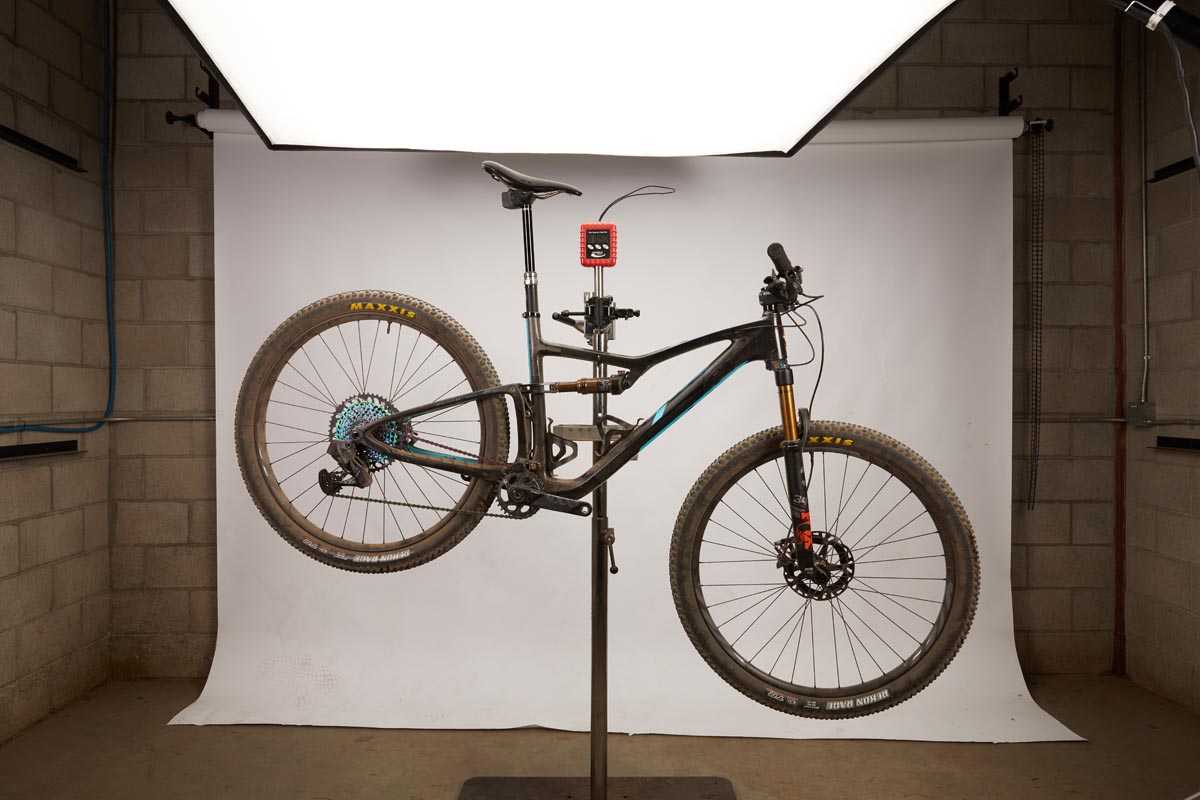 This other Large bike is an XX1 Eagle AXS build which has two bottle cages, sealant, and it’s dirty with the 2021 fork instead of the 2022. Even so, it weighs in at 24.45lbs (11.09kg). With the right fork spec and without bottle cages, it should be right around 24lbs.

All forty Anniversary builds shipped out from Ibis’ headquarters last week, so if they’re not already spoken for, you might just find one in a shop near you.