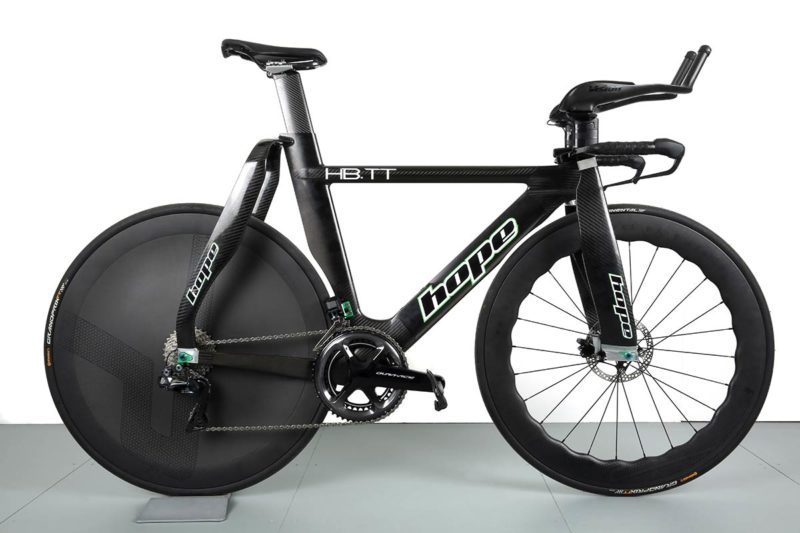 Hope recently reconstructed our idea of what an aerodynamic bike looks like when they released the £15,000 Hope HB.T x Lotus for GB’s Olympic Track Cycling team. Taking full advantage of new UCI rules, Lotus created an 8cm wide carbon fork and integrated handlebar, to pair with Hope’s 8cm wide seat stay blades, that were said to improve aerodynamics when the bike and rider were considered as one unit. Now, Hope Technology have made a road-worthy version of the HB.T, creating what is quite possibly the wildest looking time trial bike on the planet. We caught up with the man responsible, Sam Pendred, to learn more about the Hope HB.TT. 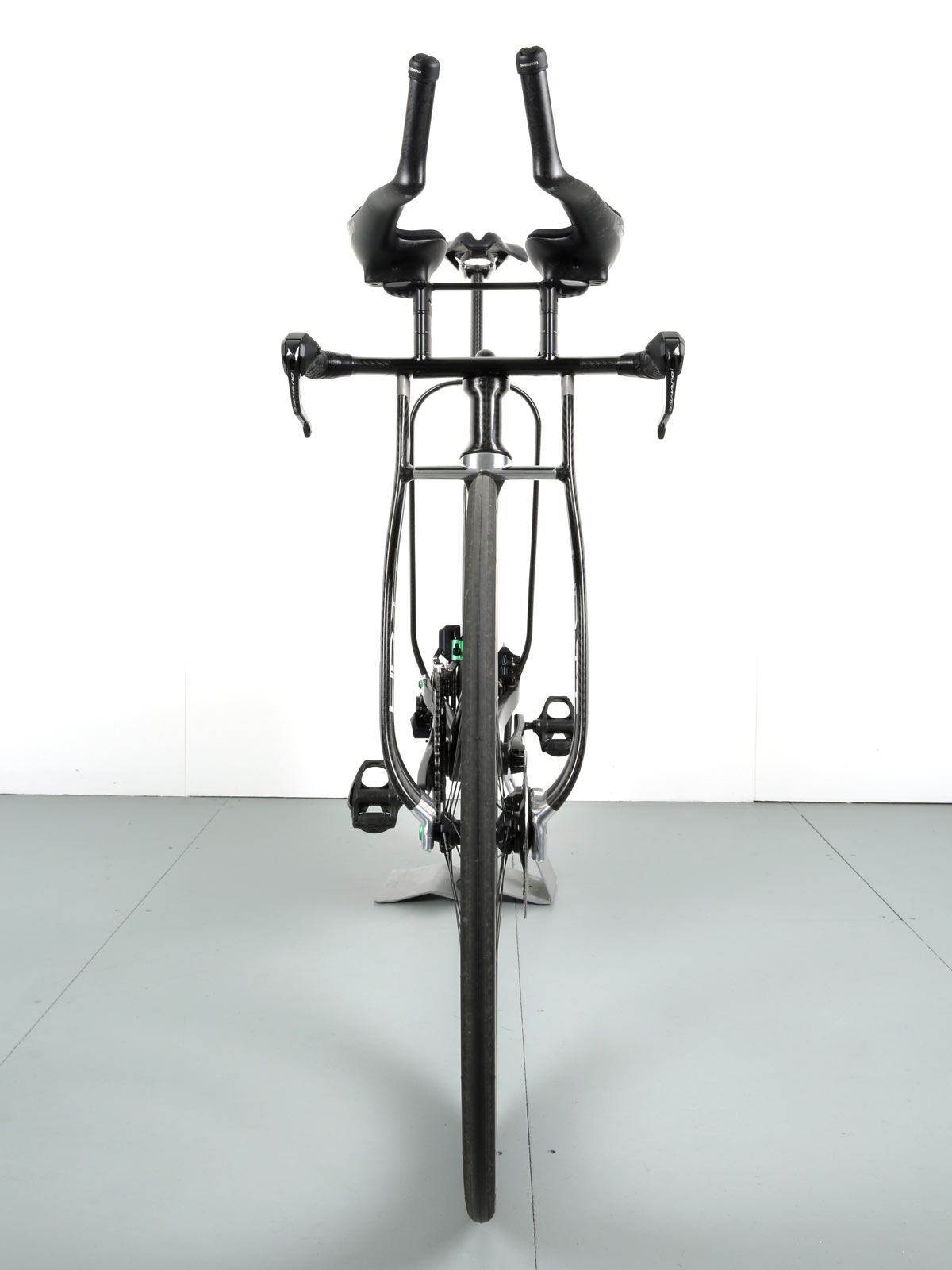 First off, why? The Hope HB.TT started off as nothing more than a fun idea off the back of a conversation with one of Hope Technology’s owners, Ian Weatherill. While car manufacturer Lotus was a key partner in the creation of Team GB’s Olympic Track Bike, the HB.TT is entirely a Hope creation. “We wanted to make the track bike a bit more user friendly with a few gears and a set of brakes so we could use the bike we had made!” – Sam Pendred, Designer of the HB.TT. 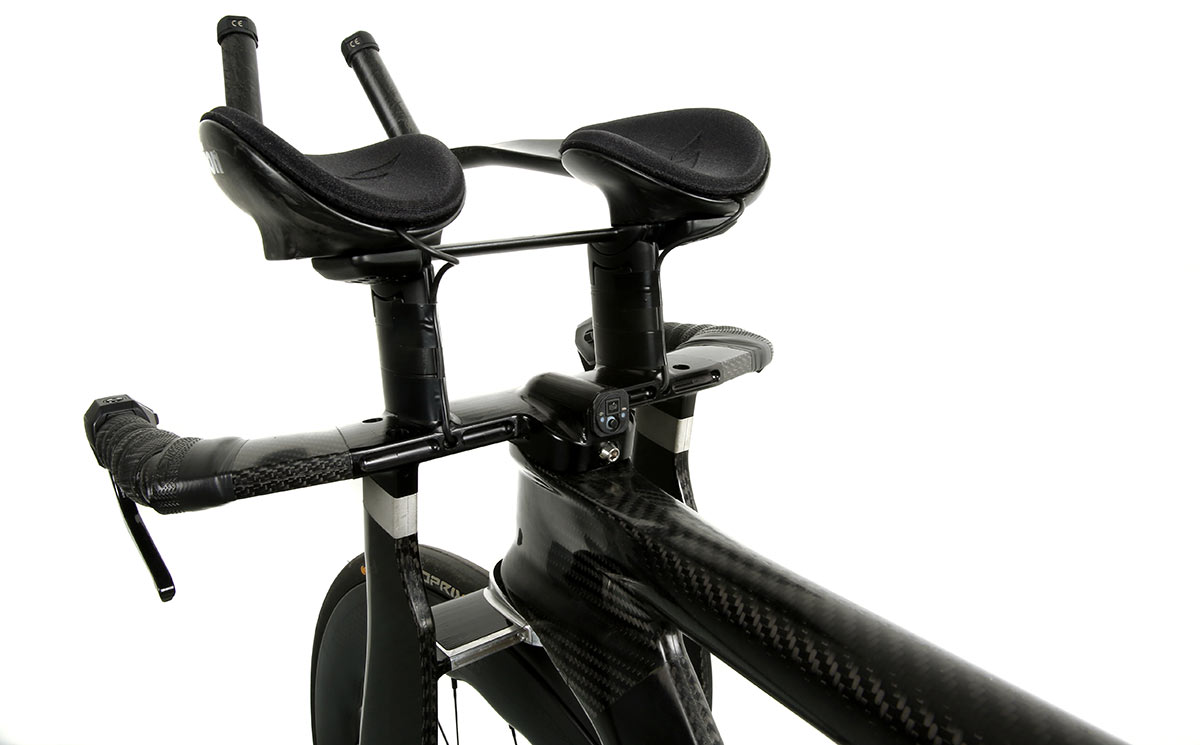 Not ones to sit idly and wait for the world to return to normality, Sam and the Hope designers used the quiet time during the pandemic to develop a first prototype, which is what you see here; a bike that has prototype approval from the UCI. The carbon used in the prototype frame is the same high modulus material Hope used for the track bike, said to be the highest performing material that Hope use. 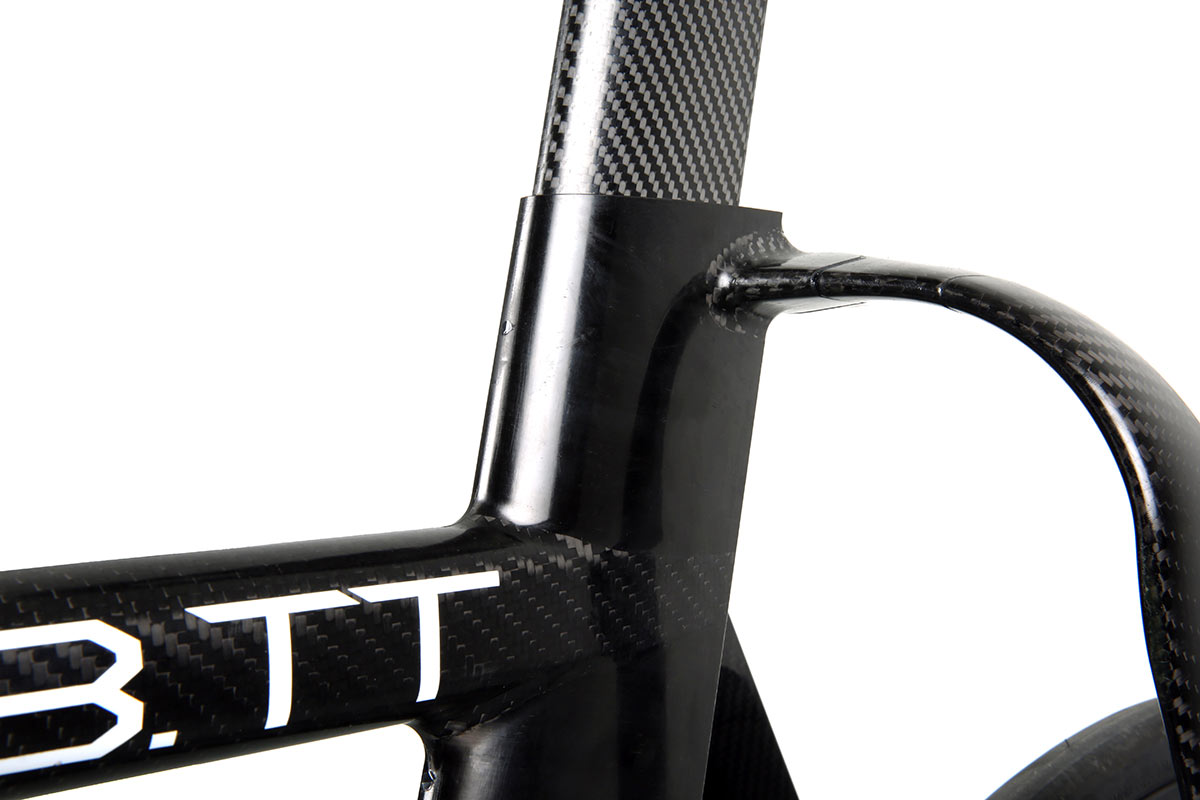 “The focus was on creating a layup that was extremely responsive to rider input, maximising efficiency of the bike. We use two different types within the layup which include woven material in complex areas such as the bottom bracket and head tube with UD material in defined locations on the frame”. 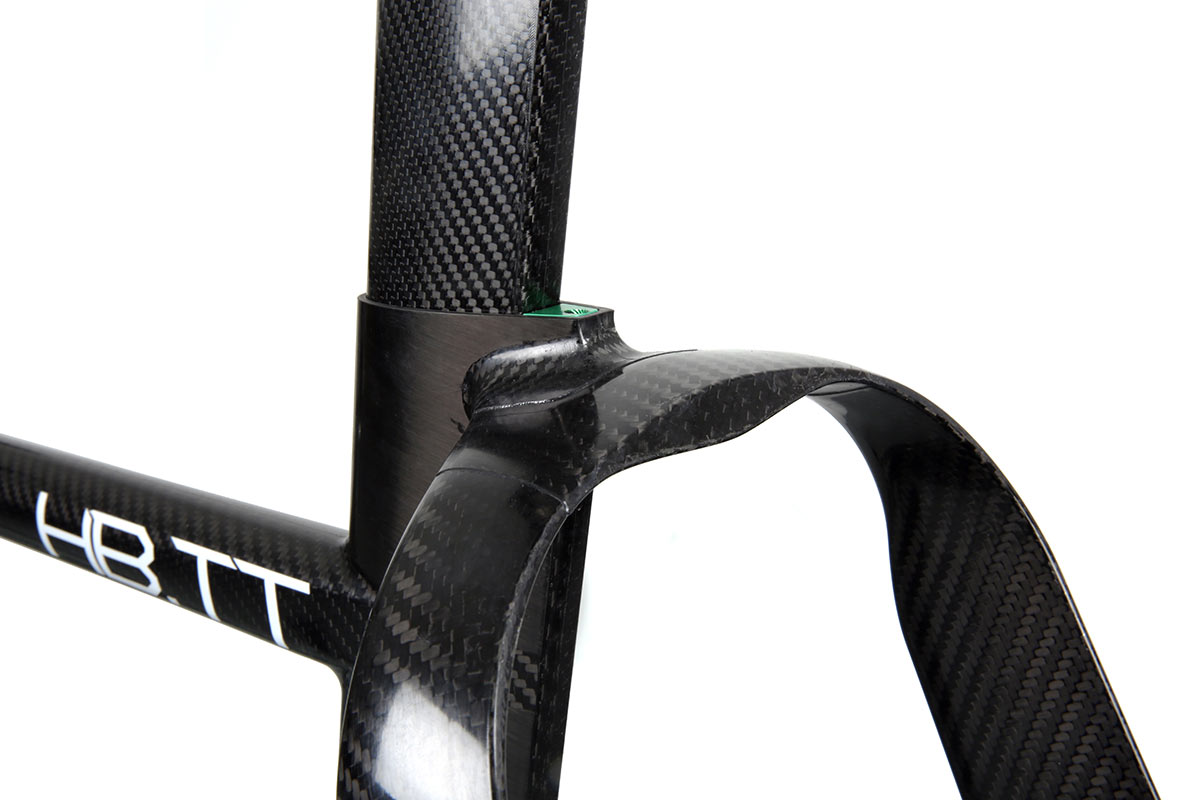 To accelerate the process, Hope decided that anything they could produce in house, they would. That meant they were able to replace all the 3D printed titanium parts seen on the HB.T with carbon or CNC machined alternatives on the Hope HB.TT. 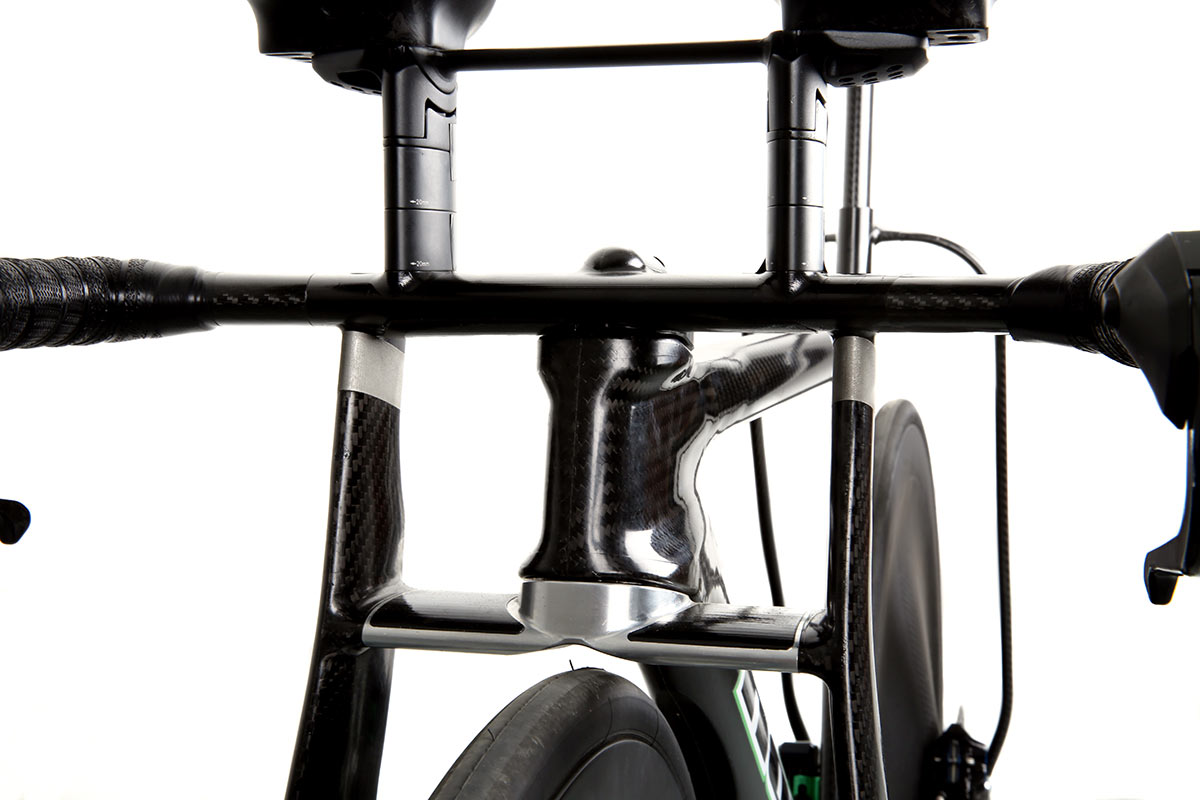 It also gave them the opportunity to make the fork from the track bike in a way that played to their manufacturing strengths. “We ended up either reducing weights in certain areas like the seat tube–seat stay junction or being competitive with weight. The first prototype of the fork was about 50-60g heavier which also included the capabilities of disc brakes. Removing the 3D printed titanium parts also significantly reduced costs as the total cost of these parts on the track bike is in the thousands”. 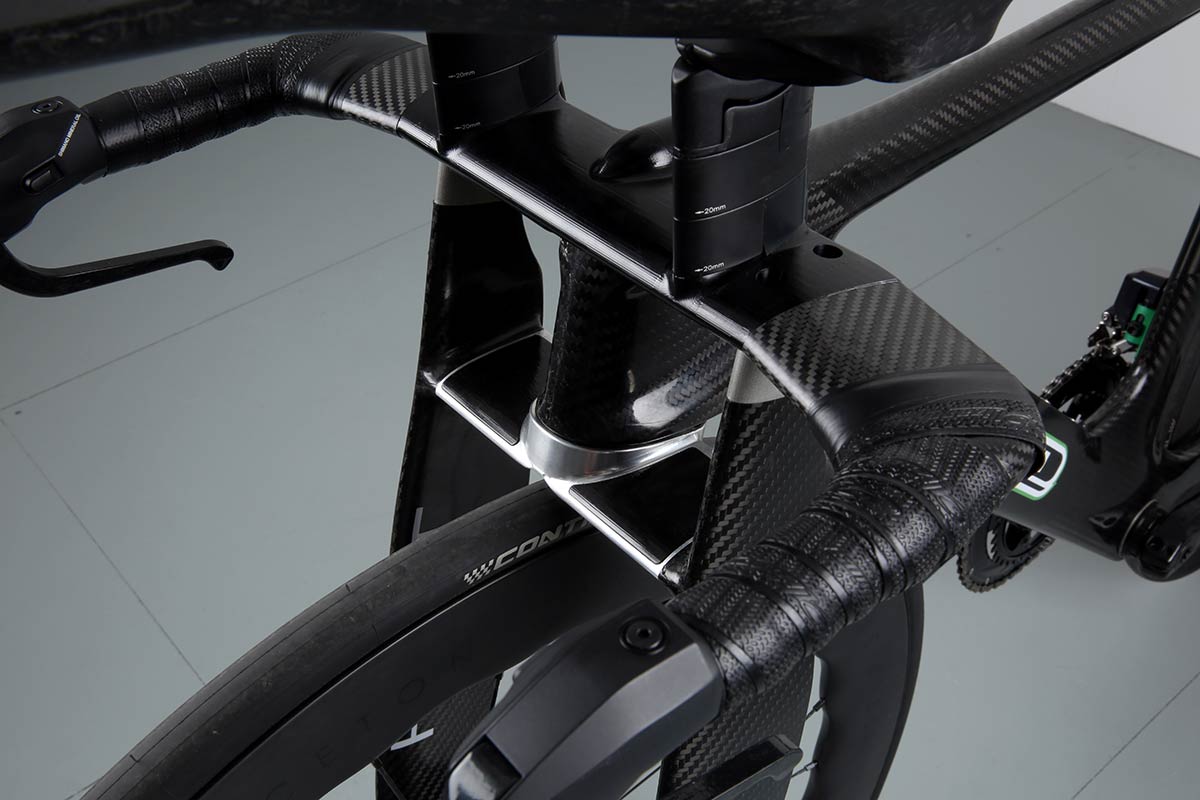 Sam tells us that the biggest challenge in adapting the fixie to a road-worthy time trial bike with gears was catering for cable management in and around the cockpit. The base bar itself is a complete redesign of that seen on the HB.T, as it needed to accommodate shifters and brakes. 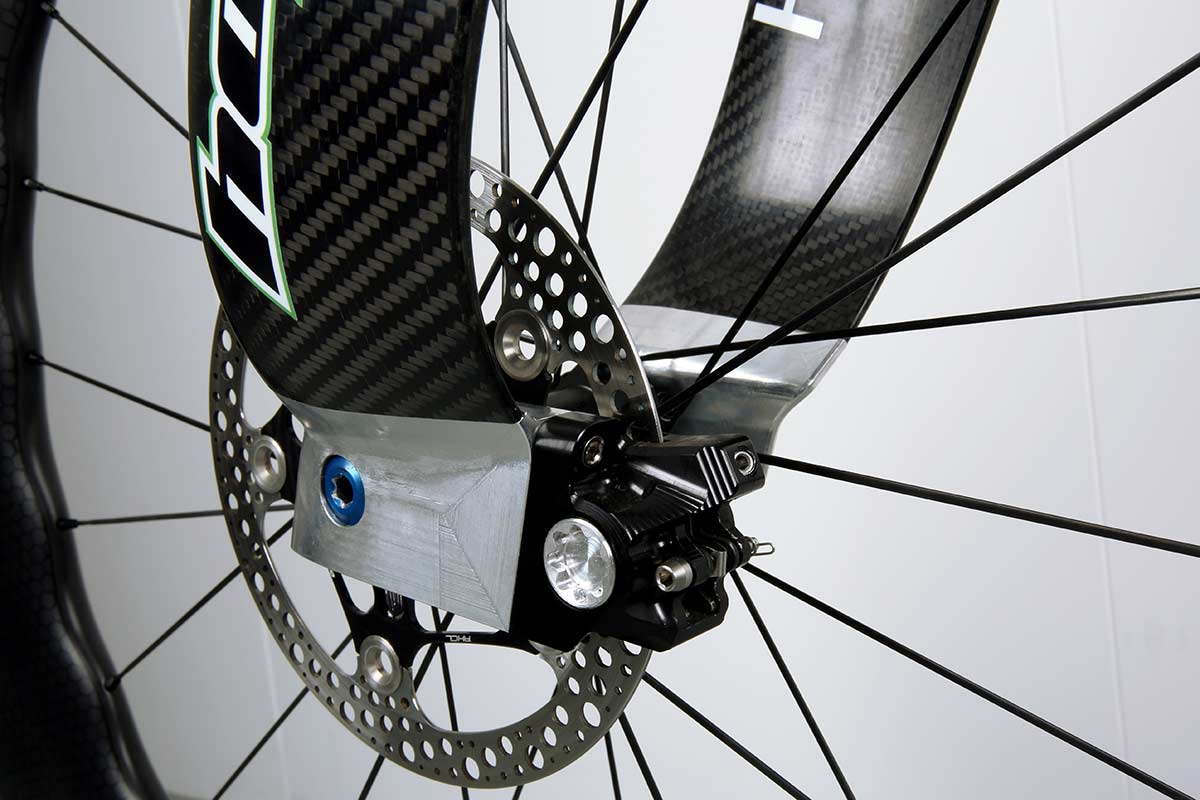 Hope machined a fully customized two-piston brake caliper to work with the fork on the TT bike; the hose and fittings are hidden internally within the drop out 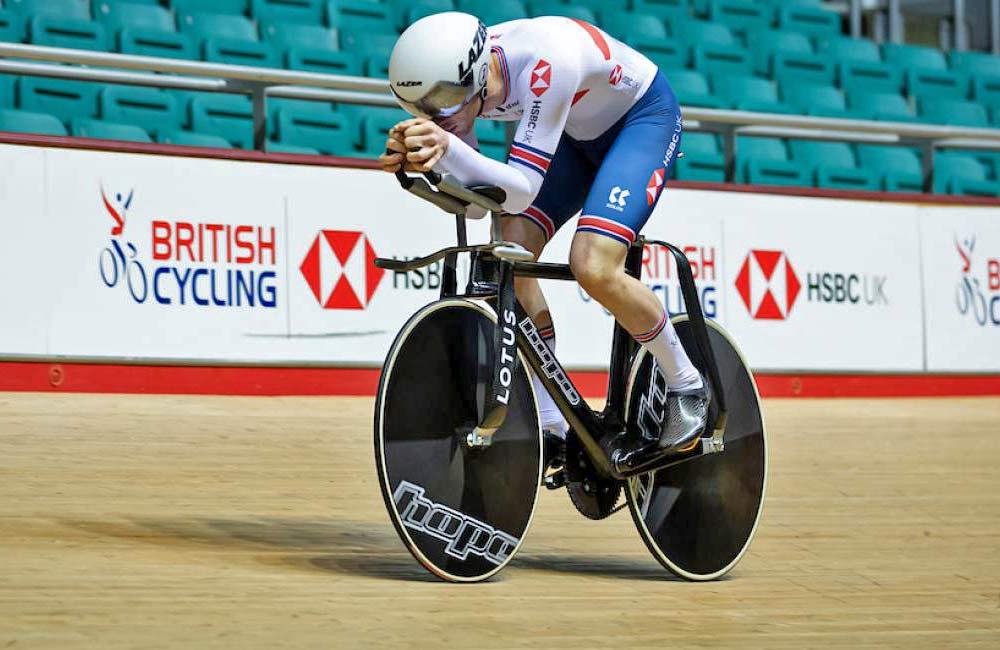 The original HB.T ran a Hope disc wheel developed using a “revolutionary manufacturing process” that allowed them to create a wheel that was dramatically improved in regard to the conventional stiffness:weight relationship of track wheels. 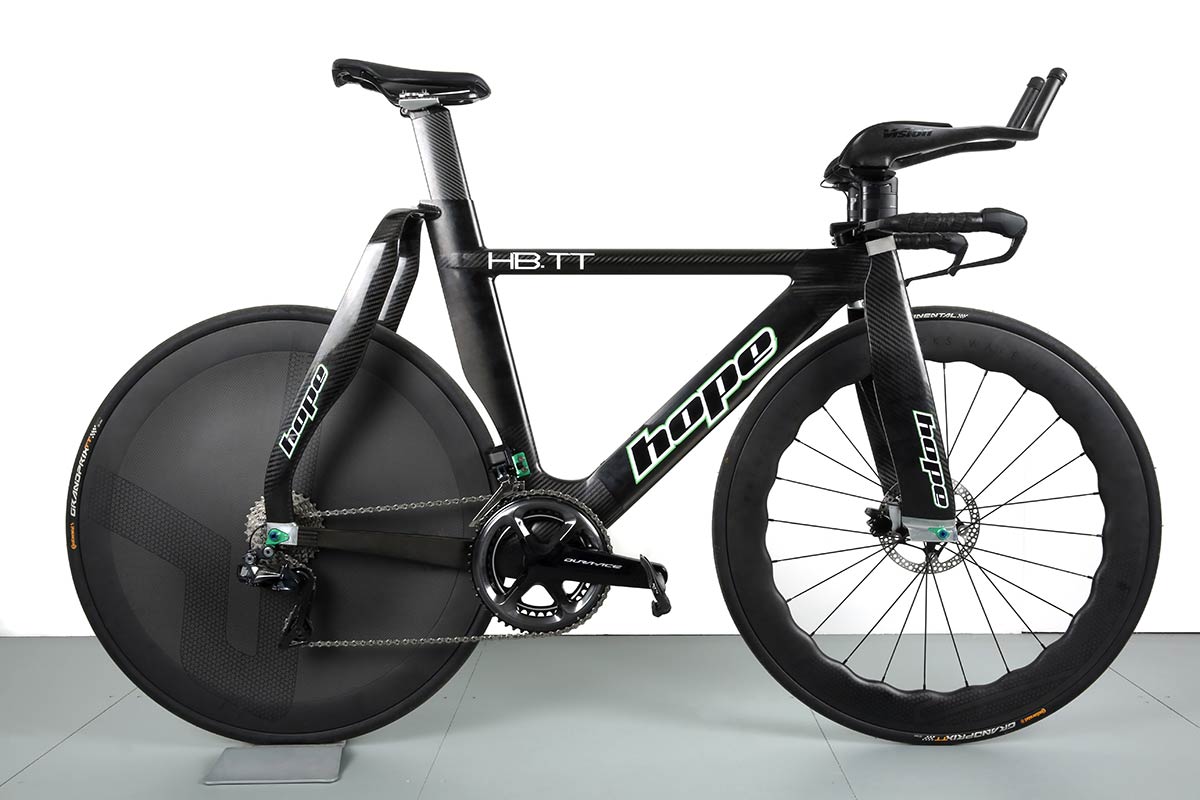 Due to time constraints the prototype Hope HB.TT bike does not run a set of Hope wheels but, the brand are hoping to work on a design with the same technology from the track wheels that are for road use.

Can I have one?

Not yet. Yet, being the operative word. “We are currently looking into ways that will reduce the cost of the bikes so we can offer them at a much more affordable price. With unavoidable complexity in some of the custom components and the desire to maintain the grade of carbon used in the Olympic bikes, we think it may be in the region of £10,000 to £15,000” – Sam Pendred.