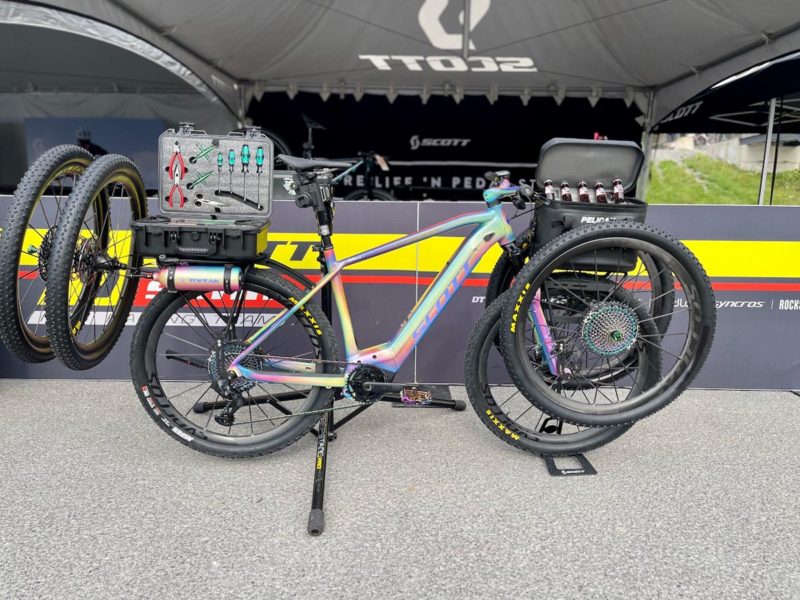 Wouldn’t it be great if your mechanic could come to you for your next mechanical? No limping back to the pits, just pull over and your mechanical savior comes to you. Other than the basis for services like VeloFix, it also seems to be the premise behind Brad Copeland’s wild Scott “Super Support eBike.” 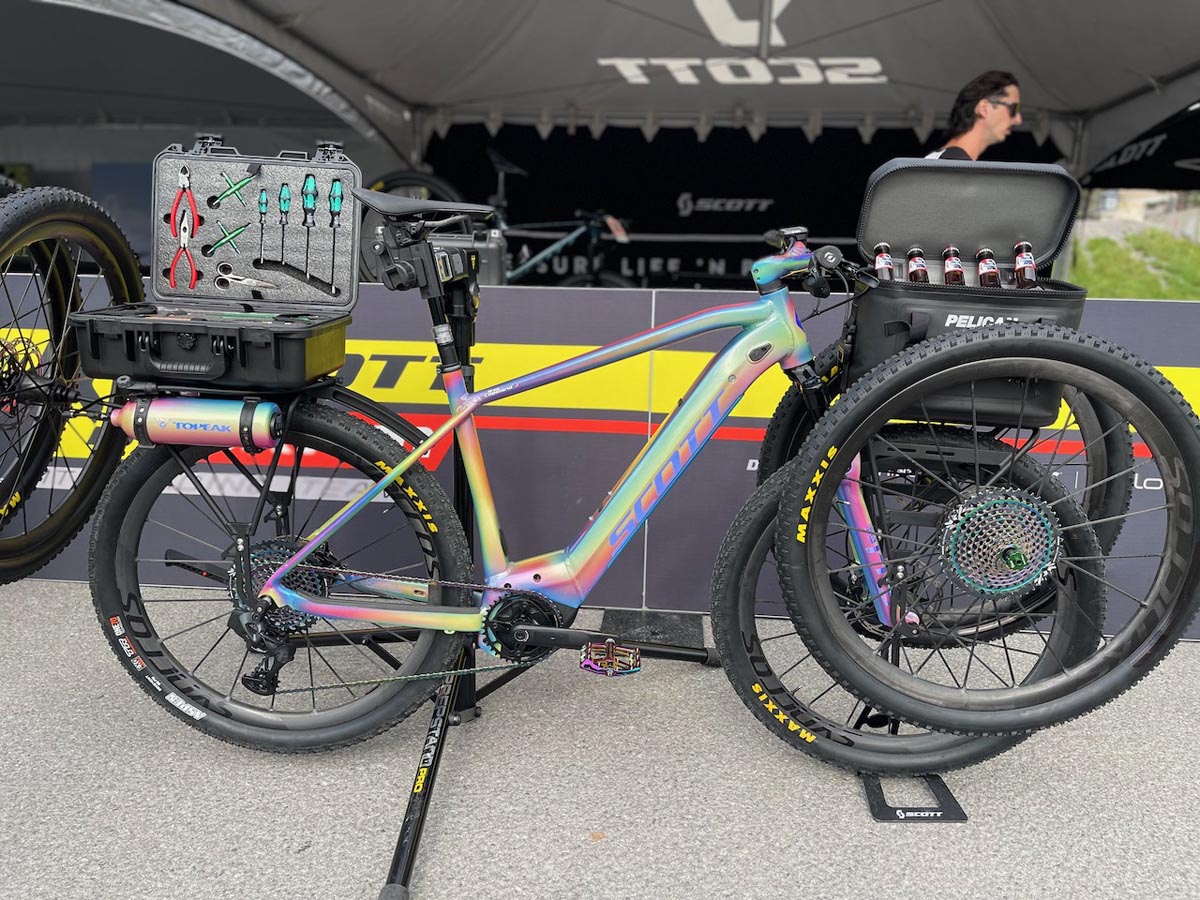 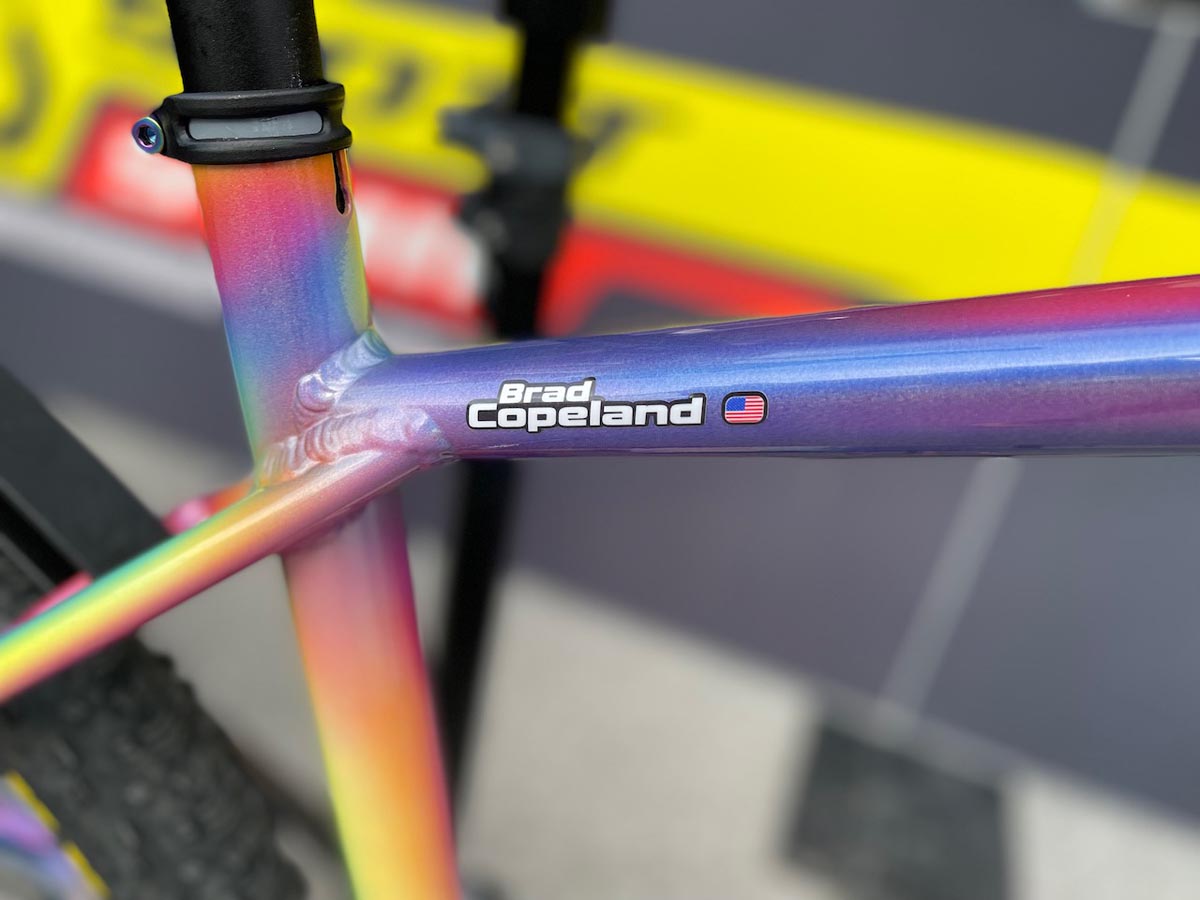 As Kate Courtney’s mechanic on the Scott SRAM MTB Race Team, Brad Copeland is always ready to solve any mechanical. But if Kate is on the other side of the track broken down, say just before she has to report to the starting line, time wasted getting back to the pits could make or break the day. Presumably, Brad could jump on this wild ride and pedal right to the spot of the issue and fix it on the spot with the included spares and tools.

Starting with what appears to be a Scott Aspect eRide 940 frame, the bike has been given a wild paint job from Made Rad by Tony to resemble the ever popular oil-slick look. 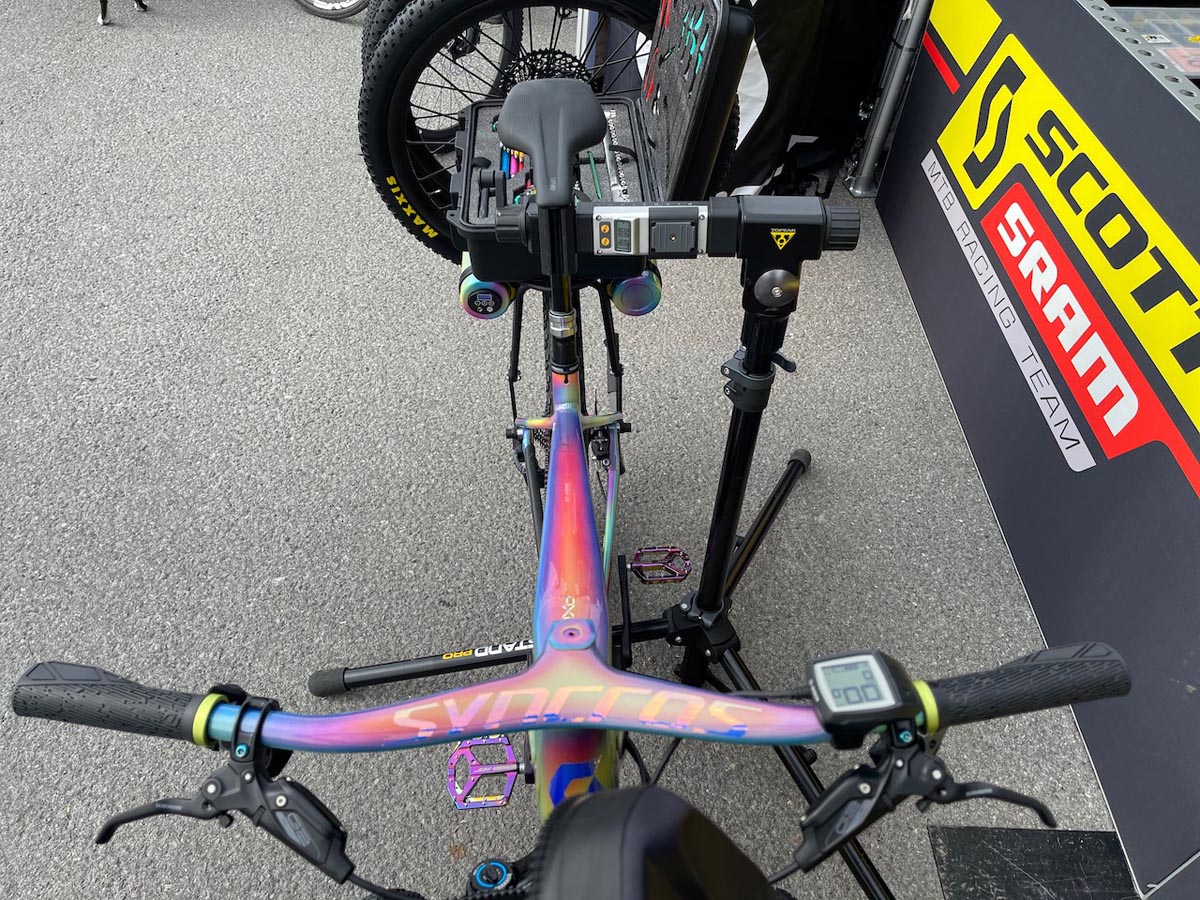 That theme continues throughout the bike including the Syncros one-piece bar/stem combo. 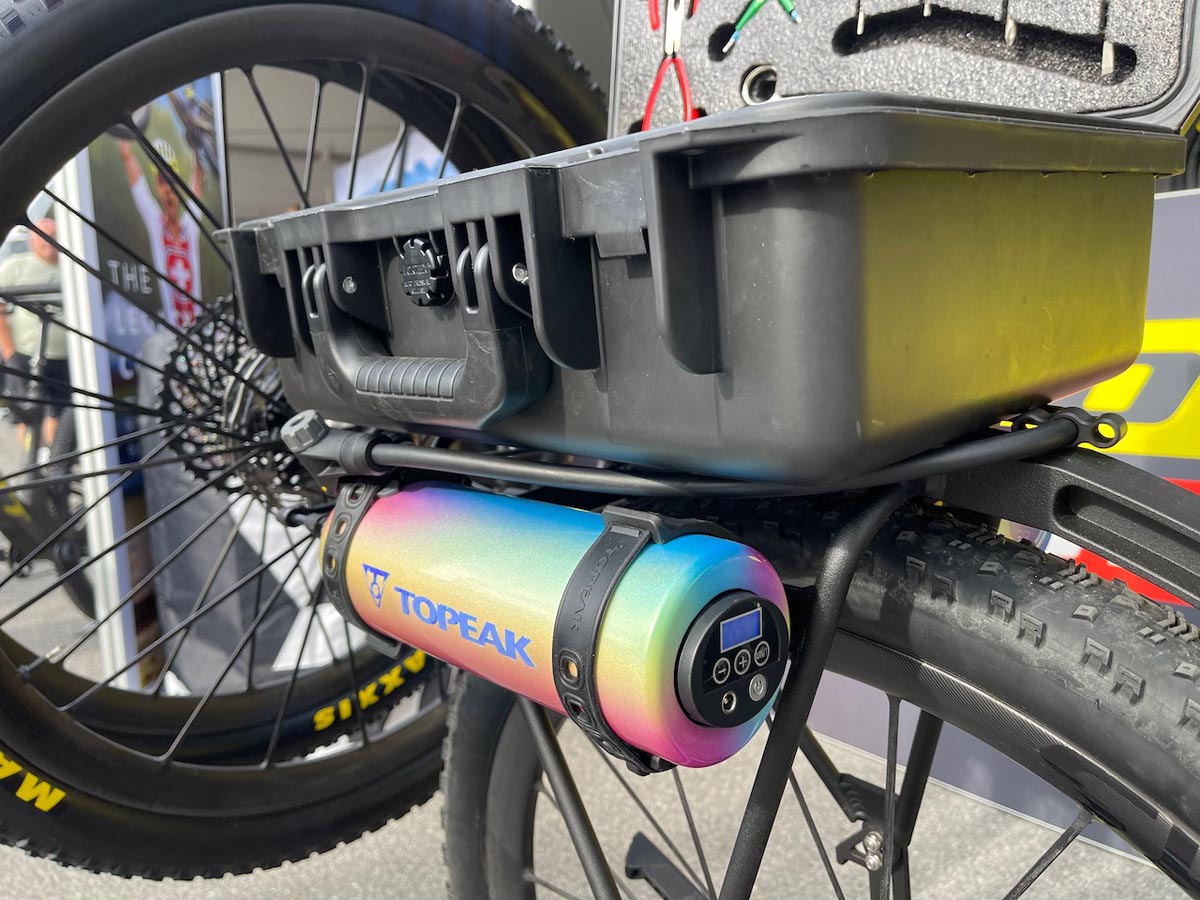 You’ll also find matching Topeak TubiBoosters—though from the looks of it, these aren’t your average air cans. The current TubiBooster X is simply an air canister that you pressurize with a floor pump. Then it stores that charge until you release it into a tire. One of Brad’s Tubiboosters has an electronic control unit on the end of it. So far details are scant, but could this be a mini compressor? A digital gauge that tops off tires to a desired pressure? We’re on the hunt for answers, and will update if we find them.

Update: After speaking to the Friar himself, Jason Quade of Abbey Bike Tools, we can confirm that this is a custom made battery-powered air compressor that’s been retrofit inside of a Topeak TubiBooster shell. Jason worked with Brad Copeland and Ryan “Verg” Gereront of Scott to build the bike in the Abbey shop, and Jason told us that Verg spent a while in the back of the shop with a die grinder getting the TubiBooster shell opened up to fit the compressor. The final result means that the compressor can be used on a tire, or to fill the intact TubiBooster on the other side of the bike.

Also note the connection of the rack to the bike—that’s no ordinary rack strut. Instead it’s a section of an Abbey Harbor Dishing Gauge! Those racks were provided by Old Man Mountain and connected to the hubs with help from The Robert Axle Project. 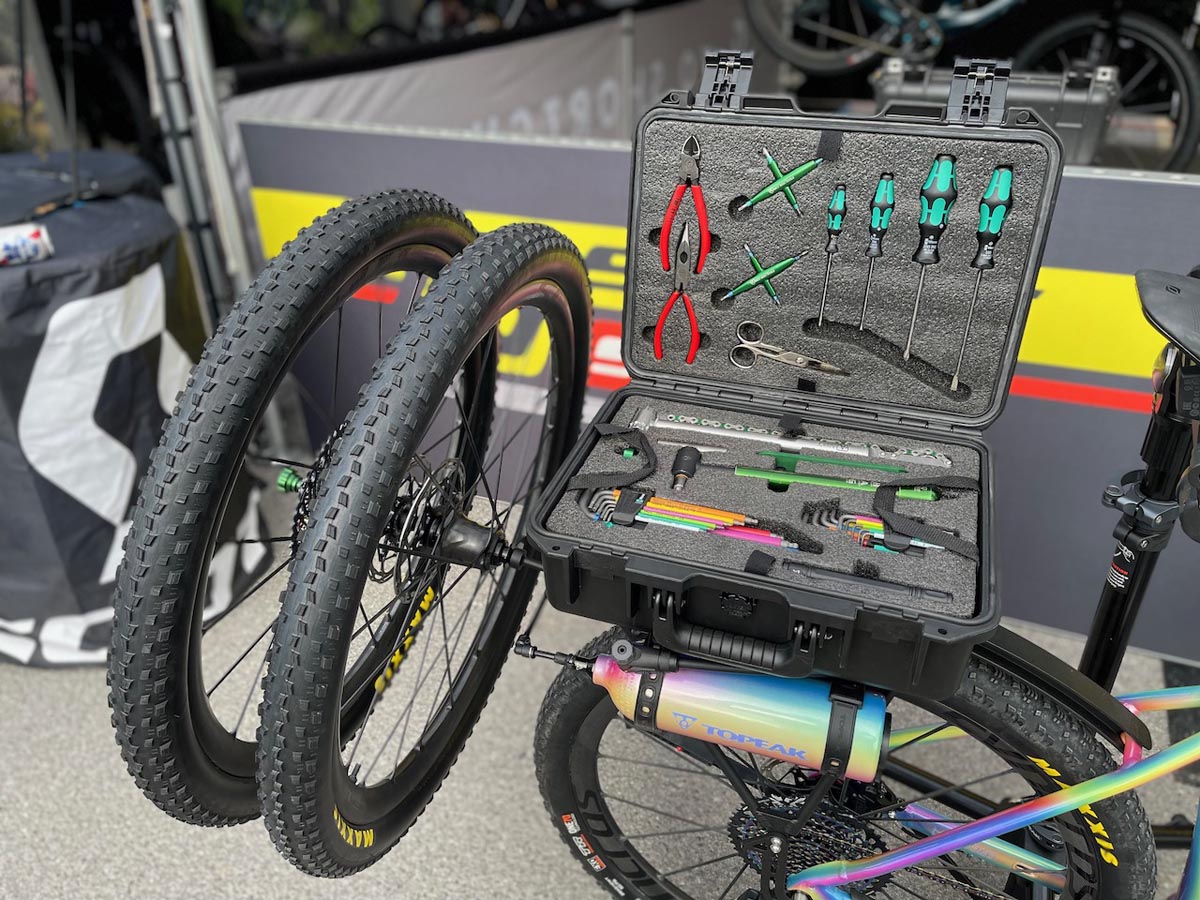 What tires are those? Apparently an unreleased XC mud tire from Maxxis…

You may have heard of #toolboxwars, well this toolbox has a bike attached to it. Inside is the full Abbey Bike Tools Team Issue Toolbox selection with a Pelican case filled with Abbey, Knipex, Wera, and more. 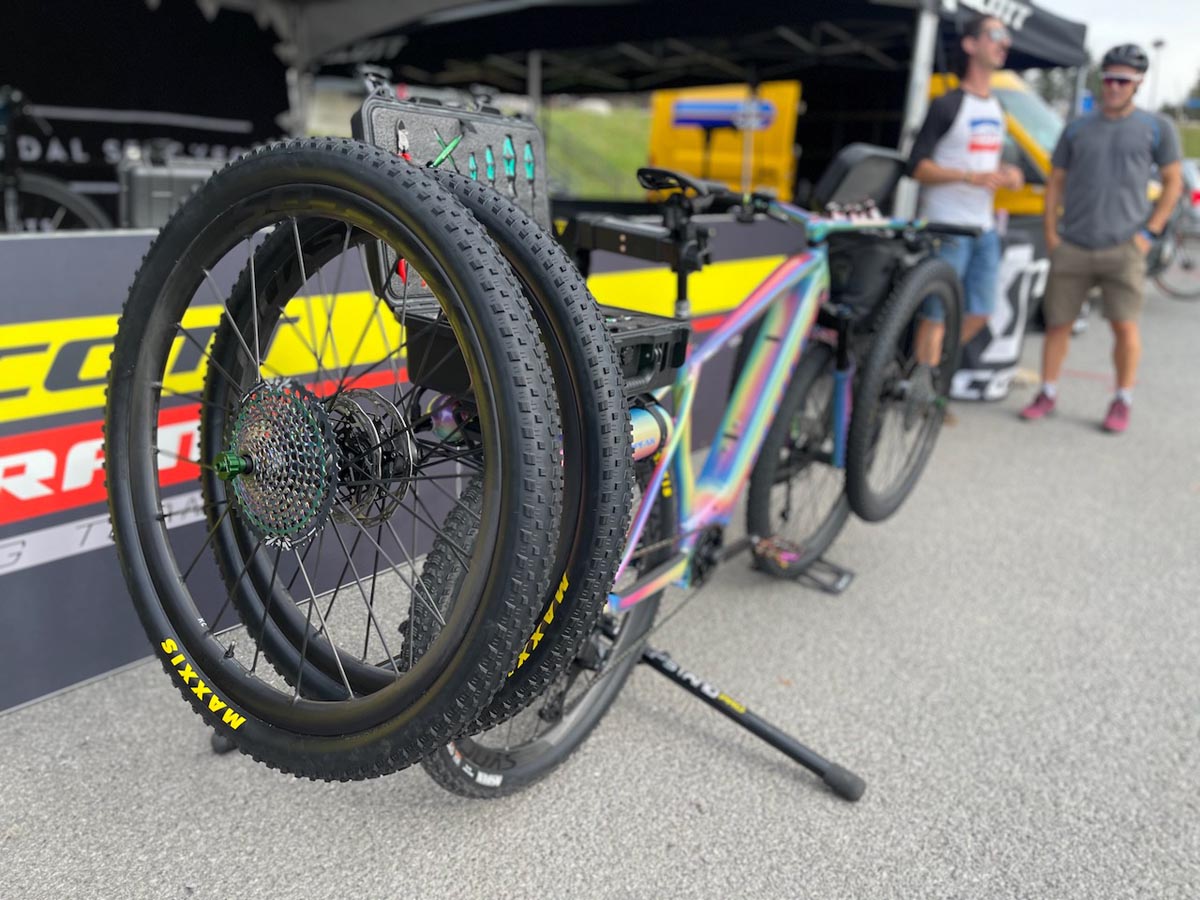 For those times when your racer needs more than a little air in their tires, the Super Support bike has onboard storage for four replacement wheels. An Abbey thru axle adapter holds them in place. 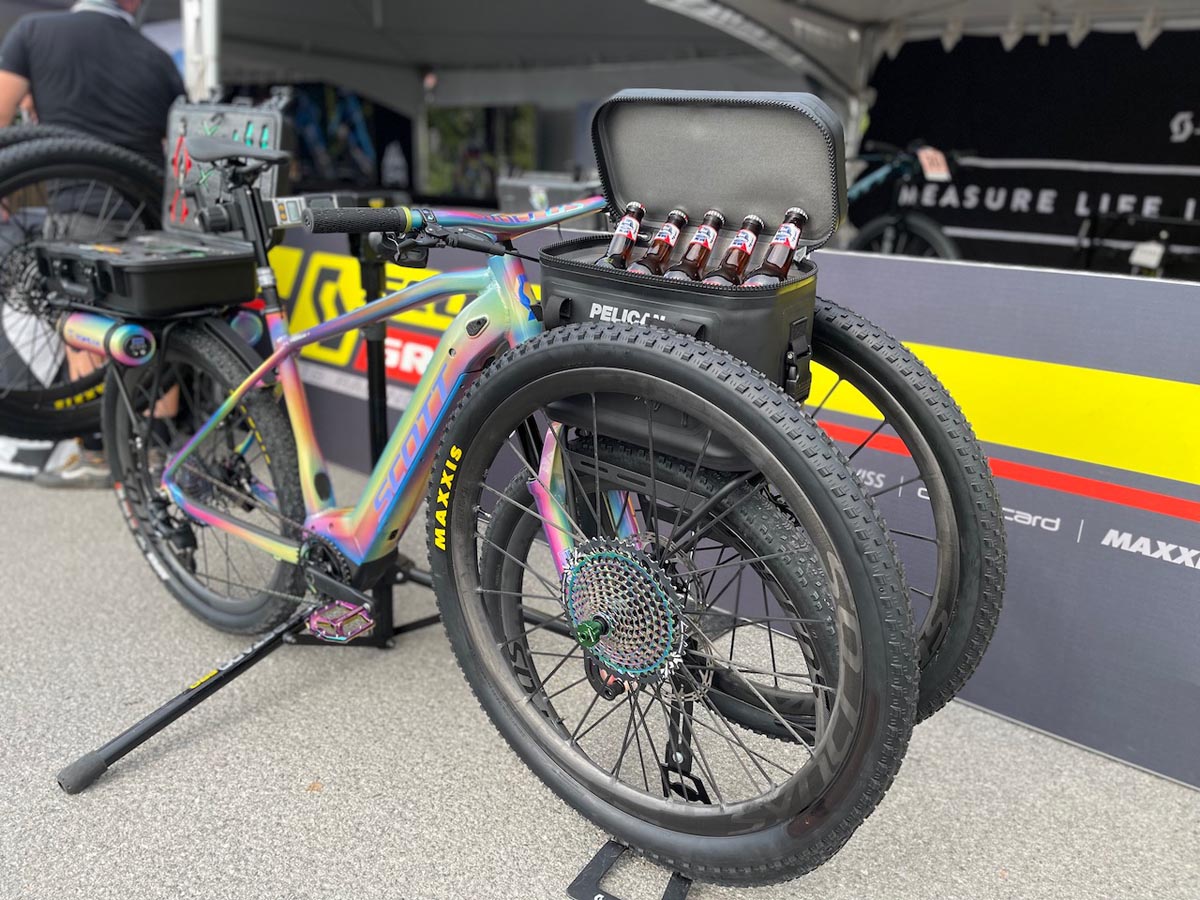 Up front, there is room for the other two spare wheels… 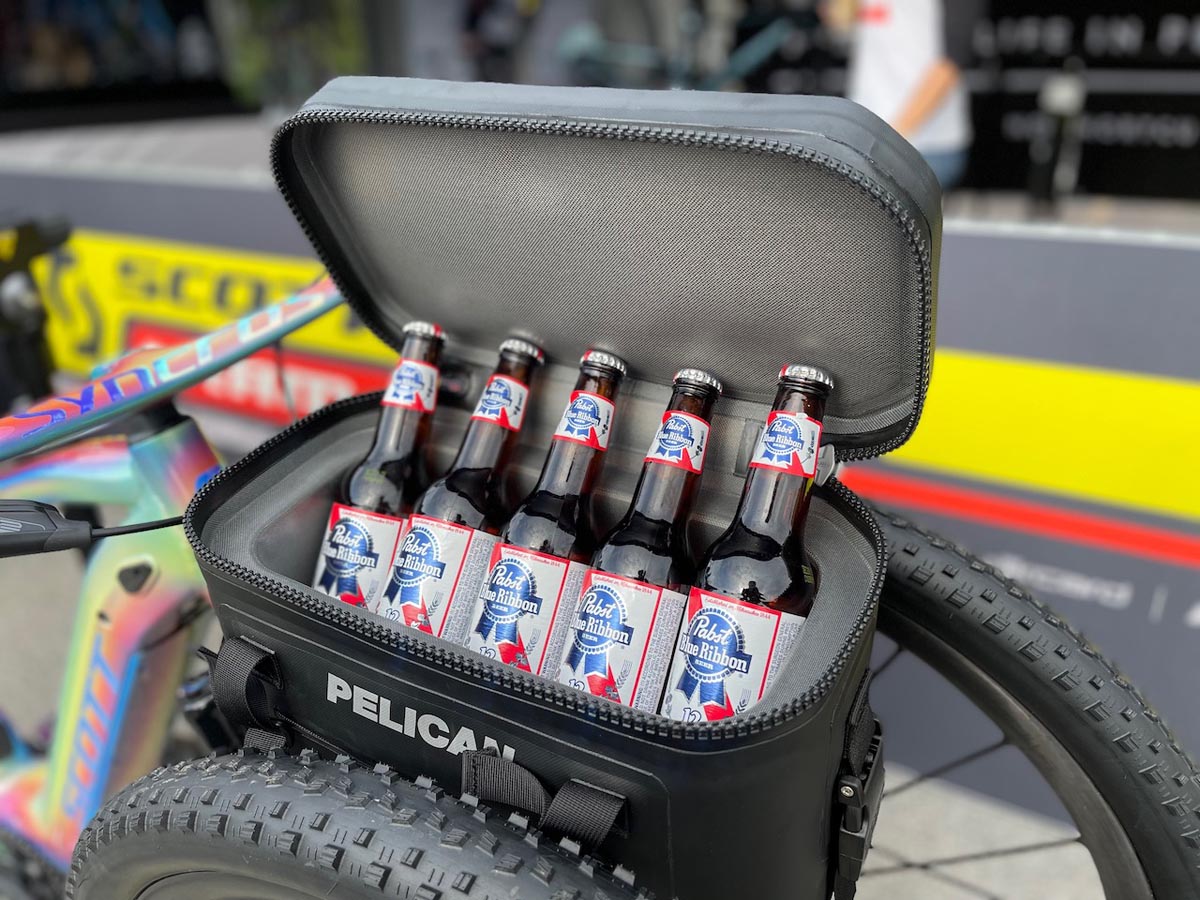 and of course a Pelican cooler for post-race refreshments. PBR for the mechanic and champagne for the racer? Originally, this bike was slated to be unveiled at Sea Otter last year, but obviously COVID got in the way of that. But we’re happy to see the project finally make its debut at the World Cup!