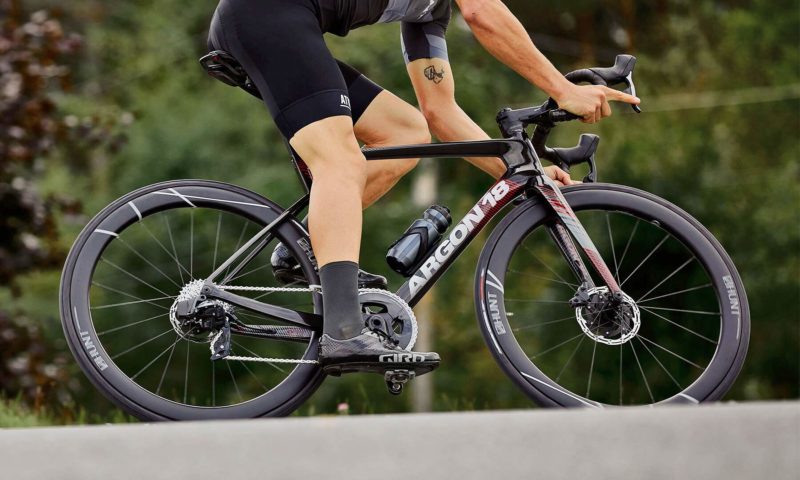 Argon 18’s all-new Sum Pro carbon road bike mixes up the best their aerodynamic Nitrogen and lightweight Gallium Pro road bikes had to offer. Call it the sum of the best parts of their Pro-level road racing platforms, combined into one superbike… 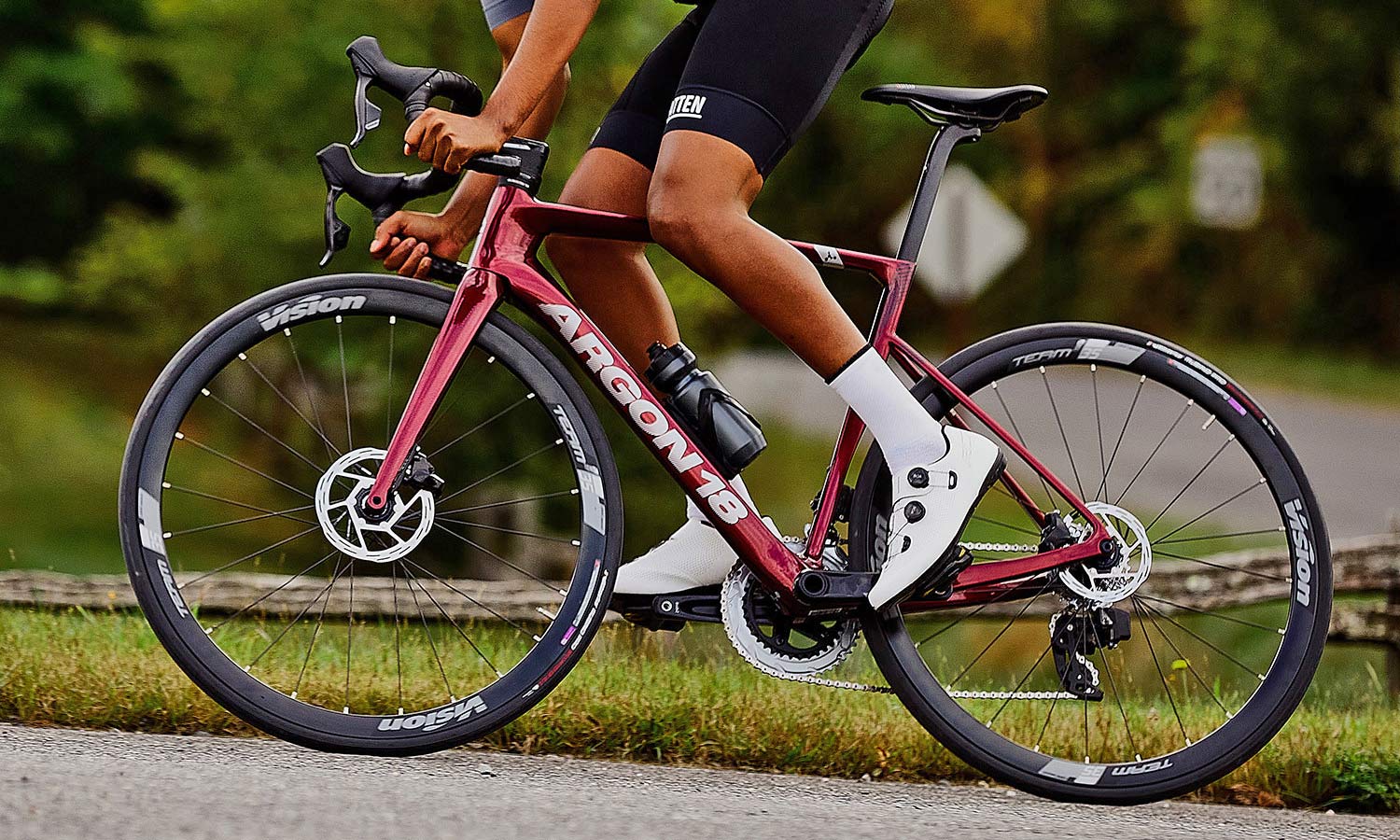 Argon 18 calls their new Sum Pro “the best of the best”. It’s just as aerodynamic as their Nitrogen aero road bike, 9% faster than the Gallium Pro, according to Argon 18’s CFD analysis. It gets the same light weight premium carbon layup as offered by the all-rounder Gallium Pro race bike, balancing race-ready stiffness with all-day rider comfort. And it refines an even more versatile, quick-handling geometry that’s ready for road riding & racing.

It appears to have turned out so well, that it looks like Argon 18 will phase out both the top-tier Gallium Pro  & Nitrogen throughout the year, although the more affordable lower carbon spec Gallium CS appears to live on. The all-new Sum Pro becomes Argon 18’s do-it-all, go-to race bike from Spring Classics to stage race days up the highest mountains. 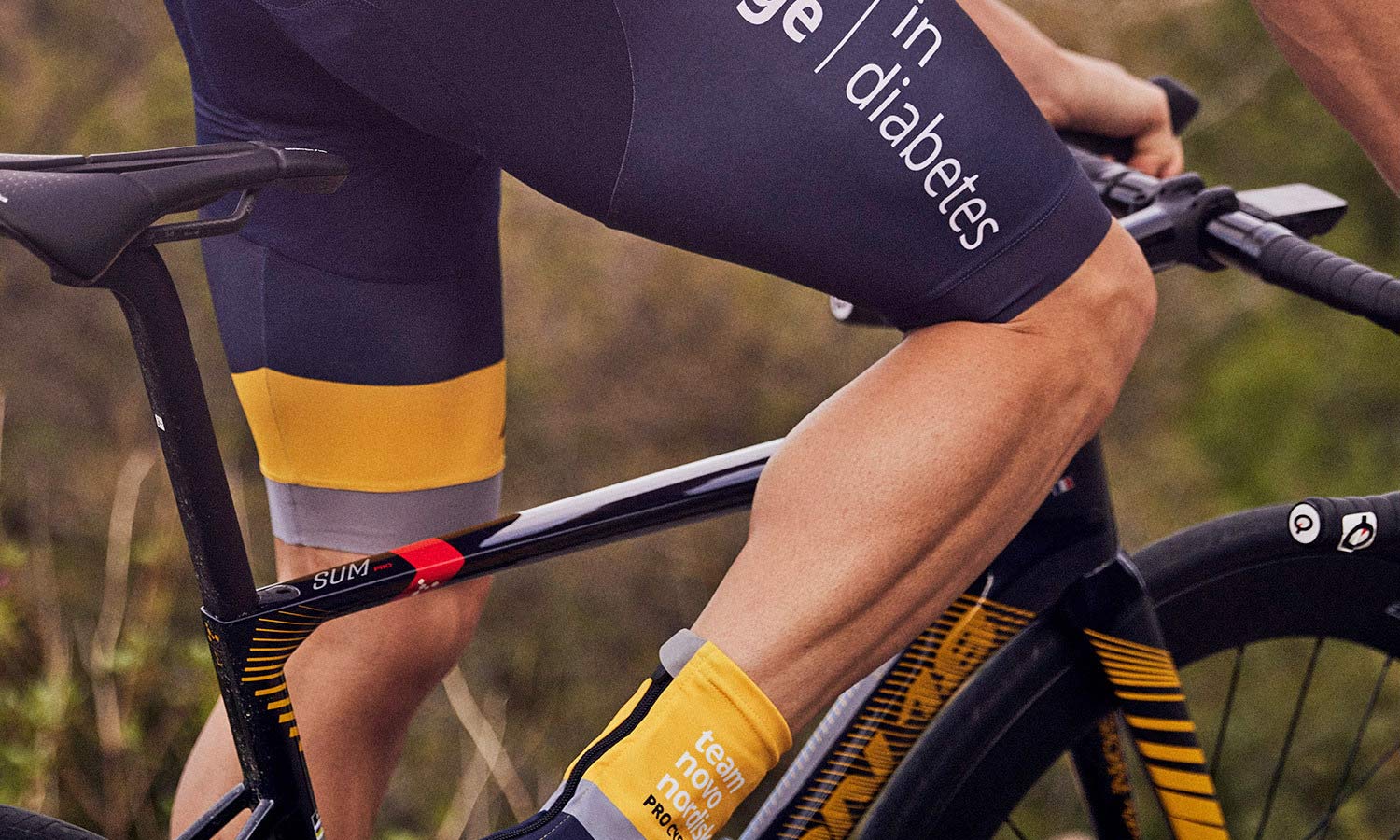 It also looks to be the new all-rounder race bike of choice of UCI ProTeam Novo Nordisk – who will be racing a newly custom painted team edition of the new Sum Pro fitted with new Shimano Dura-Ace Di2. 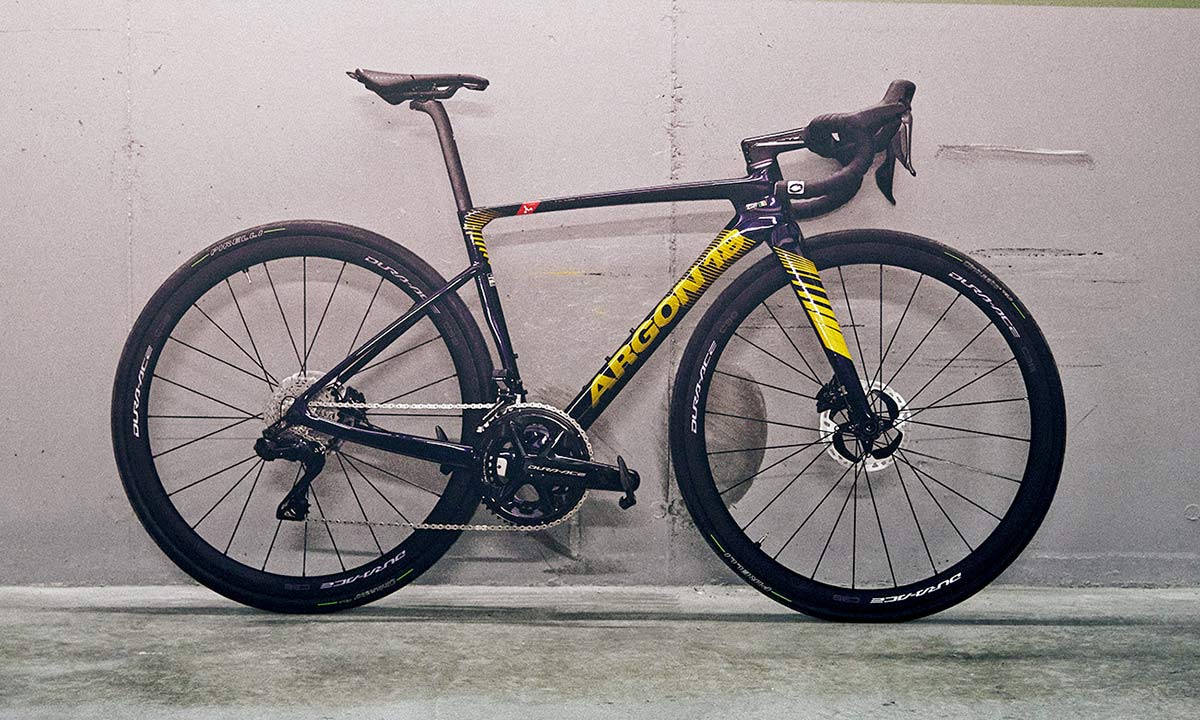 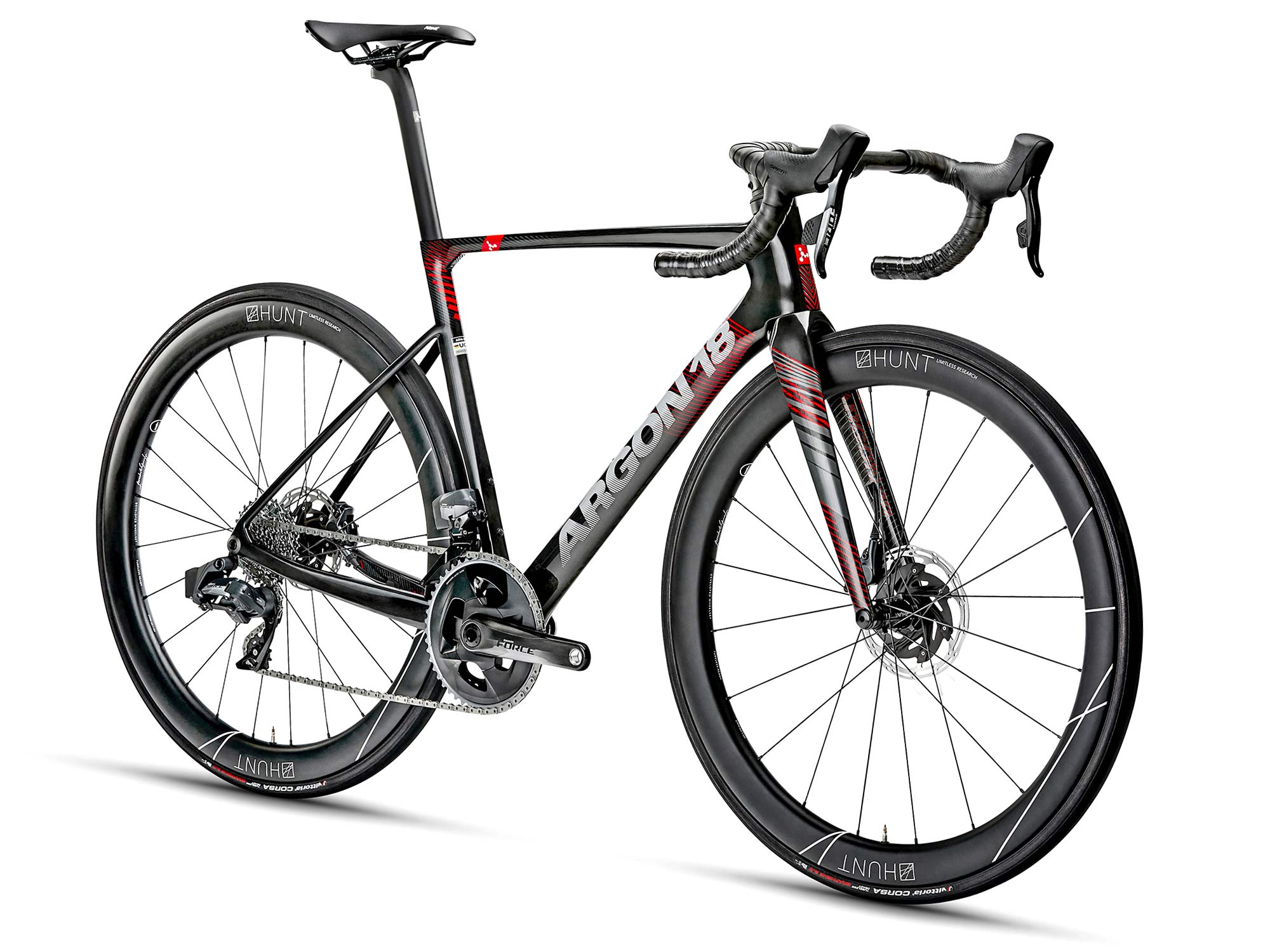 Argon 18 have specifically maximized the aero shaping of the Sum’s toptube, hourglass headtube & downtube to be more faster in the wind without adding extra weight. 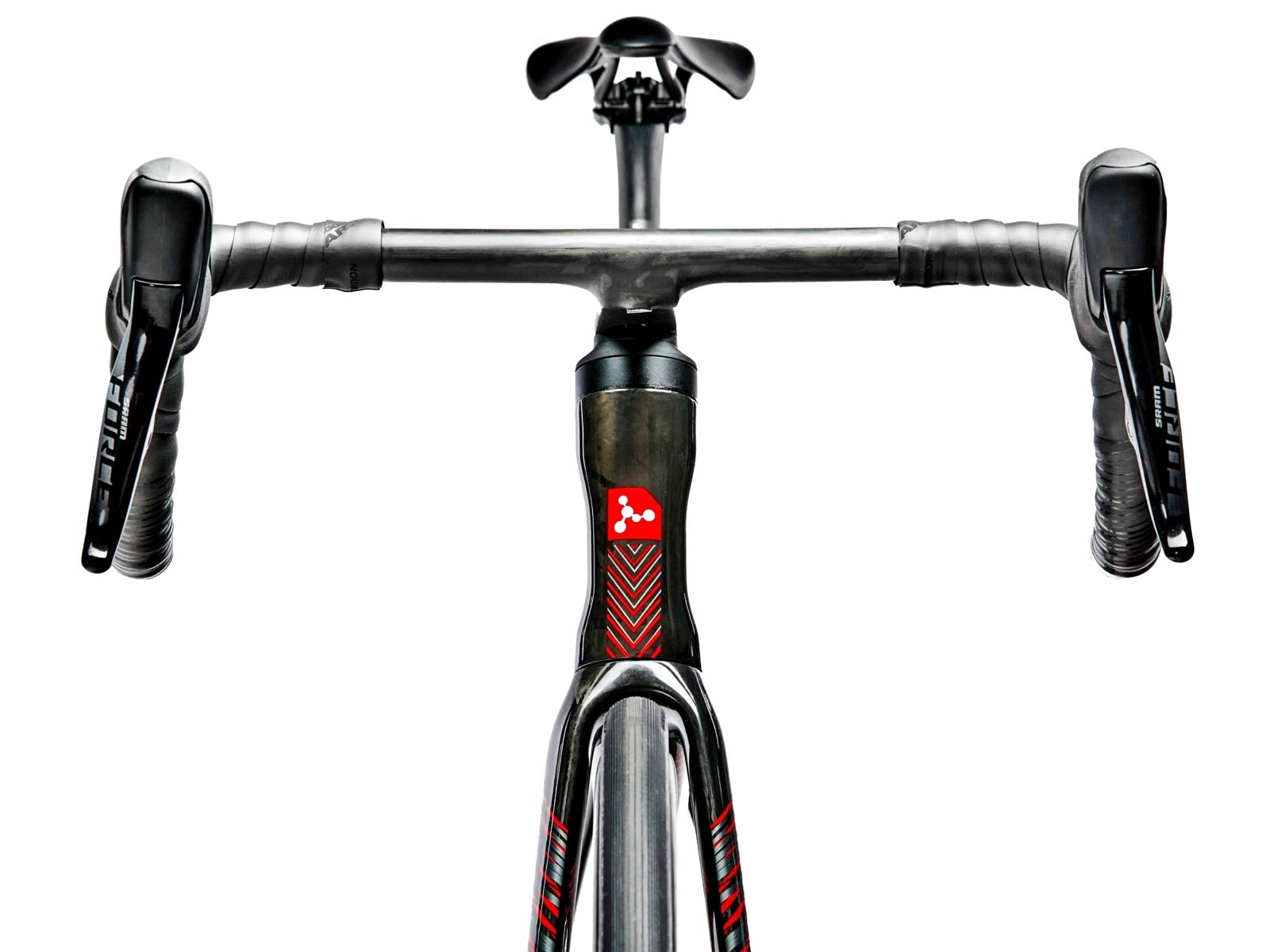 The dropped seatstays and shaped seattube with rear-wheel cutout add in even more wind-cheating tech, while also increasing rider comfort by allowing more flex through the proprietary aero seatpost, with its hidden wedge clamp. Argon 18 says that amounts to a real 30-35% more rear compliance than the latest-generation Gallium Pro for better long-ride comfort. Then up front, the legs of the fork were shaped to push air out & away from the bike to reduce overall drag. 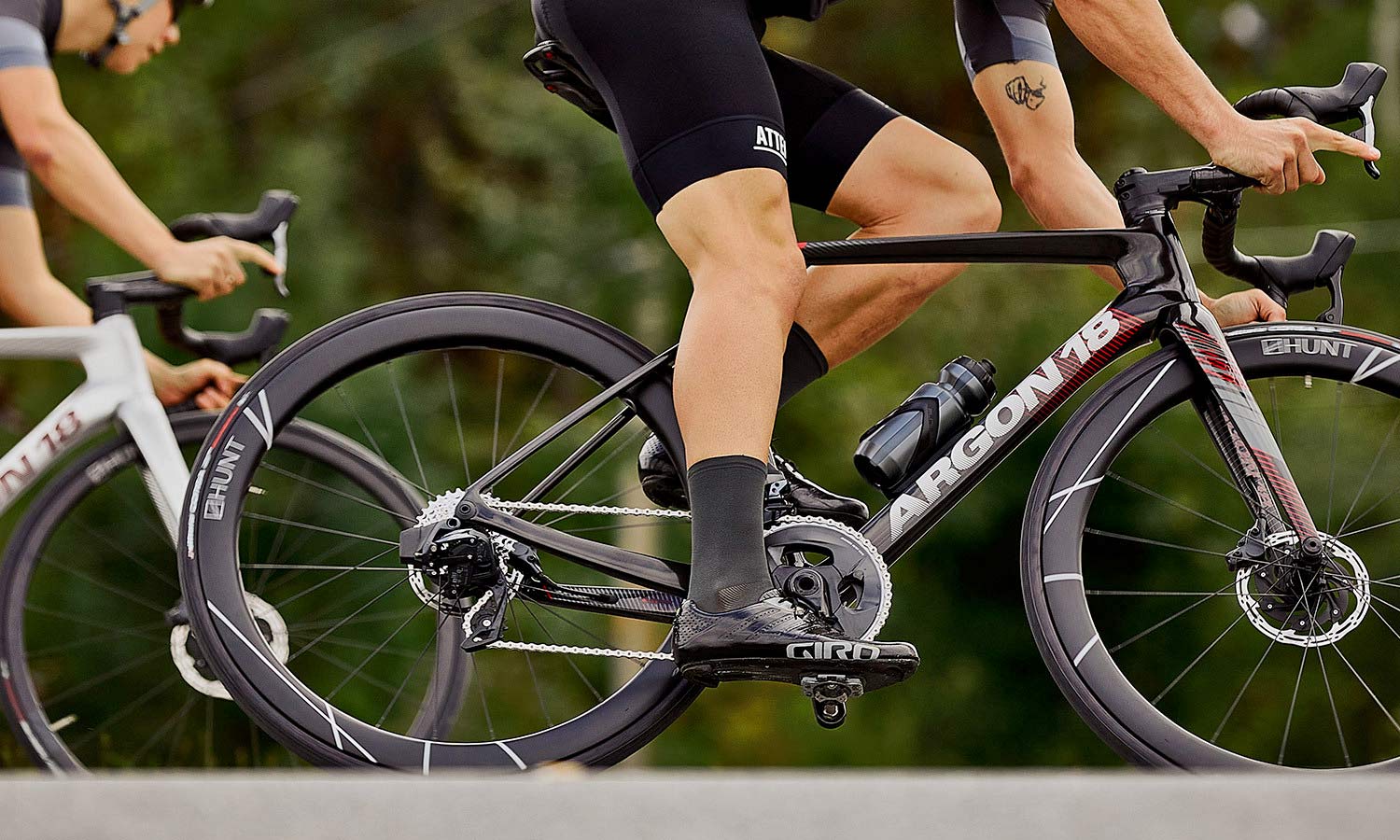 Argon 18 says the new Sum Pro with its Pro-level carbon layup weighs 850g (M painted frame), just ten grams more than the Gallium Pro Disc with the aero upgrades. The Sum Pro is also paired with its own Pro-only fork (with a separate UCI-approval) to save more weight & boost stiffness. The standard Sum Elite frame is still no slouch at a light 890g (M w/ paint) with an Elite-level layup that Argon 18 refers to as trickle-down tech. 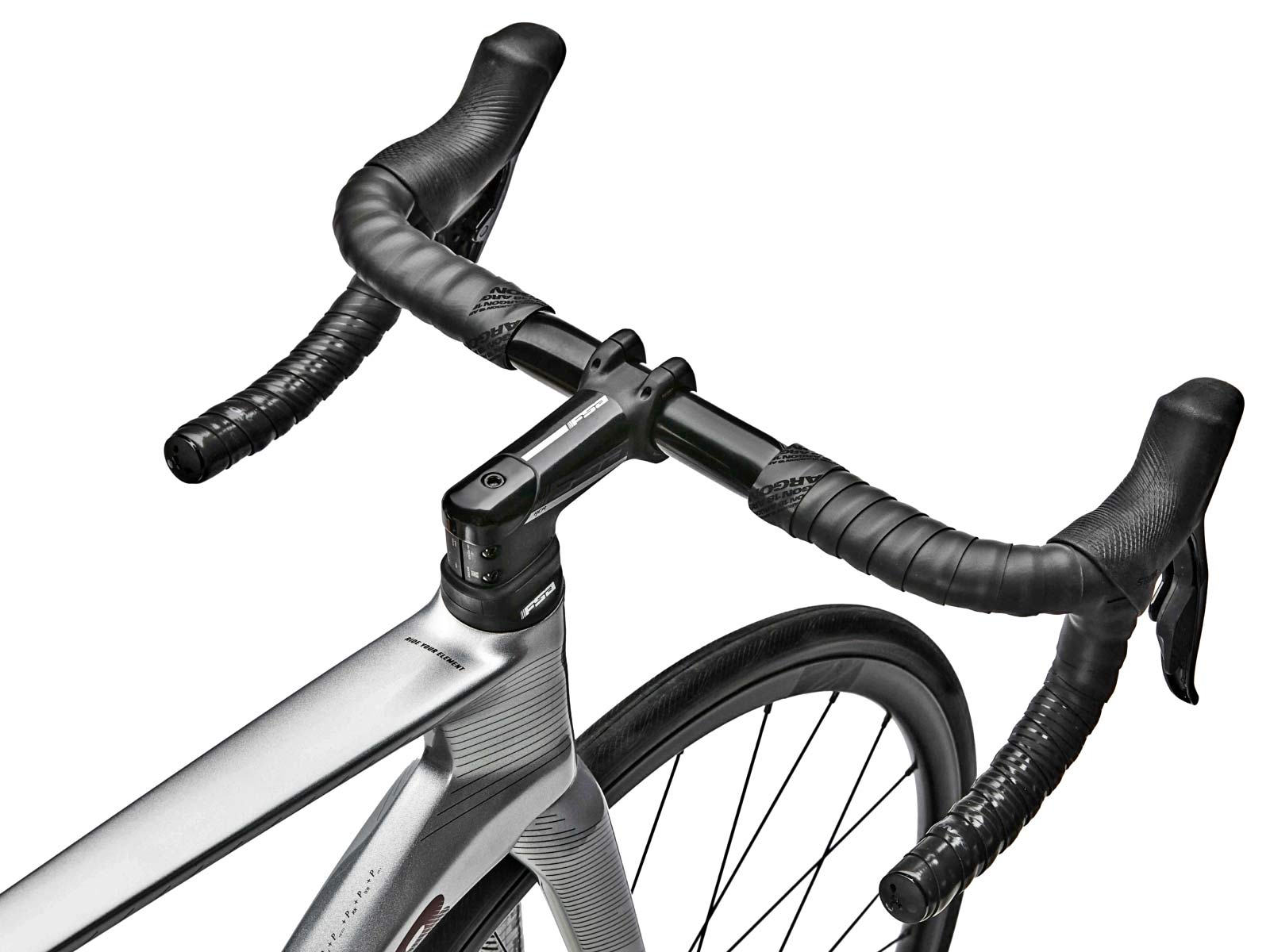 The new bikes all feature fully internal cable routing thanks to an FSA ACR headset system, making routing compatible with any modern disc brake groupset – mechanical or electronic shift. Interestingly, Argo 18 has opted for separate FSA bar and stems for all of their builds, keeping all cables out of sight but maintaining full cockpit adjustability instead of using any 1-piece bar+stem combos. 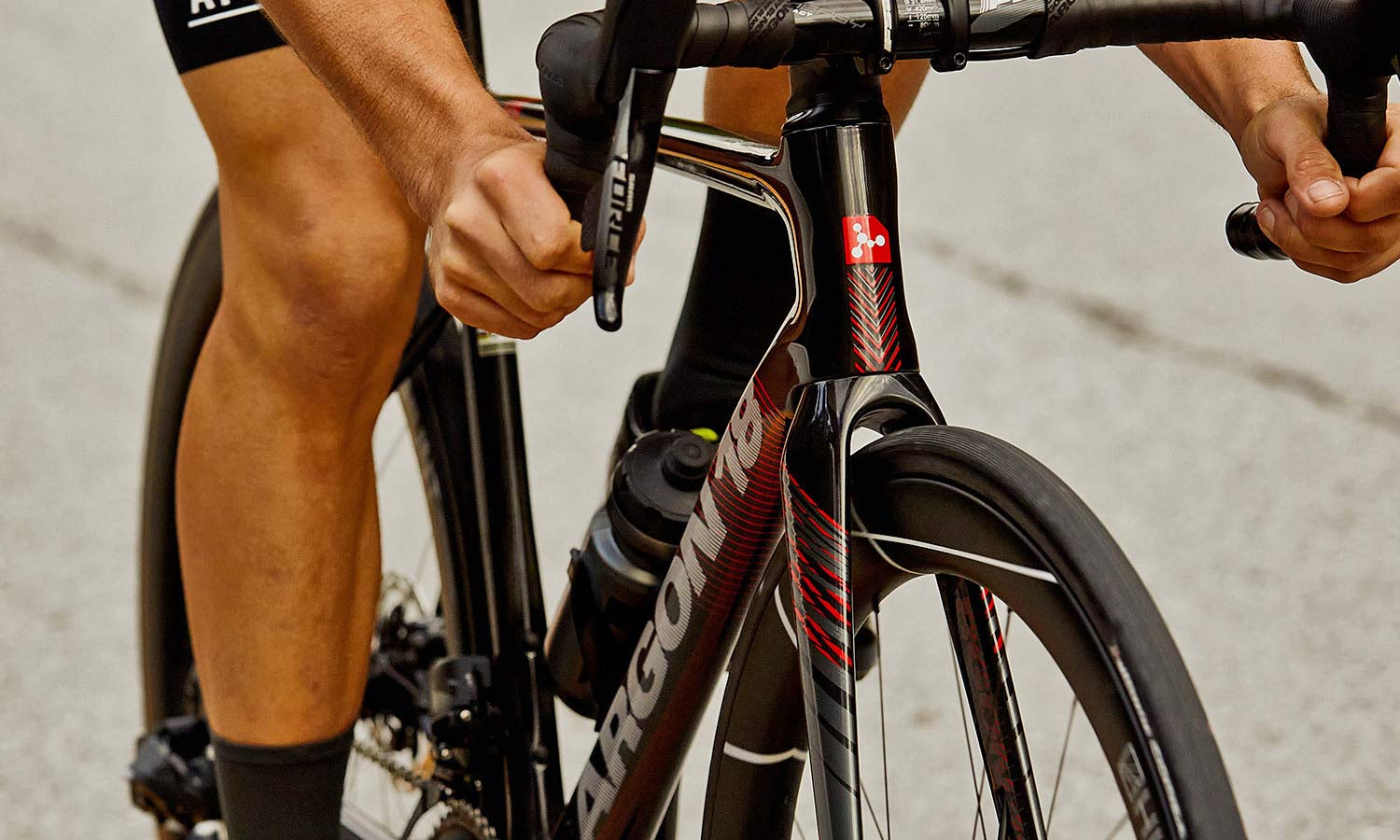 The bike now gets big for road tire clearance for up to 700 x 30c tires, which Argon 18 says is on a modern wide wheelset measuring out up to 32mm wide actual – max 32mm wide rims to fit between the stays, as well. The carbon Sum features 12mm thru-axles, flat mount disc brakes, and gets a pressfit BB86 bottom bracket.

That’s also part of using the standard cockpit components, which allows the new Sum to be perfectly fit to all riders via Argon 18’s 3D+ fitting system that offers three headtube extensions (0, 15 & 25mm) for each frame size to tweak frame Stack without sacrificing stiffness with conventional steerer spacer stacks. 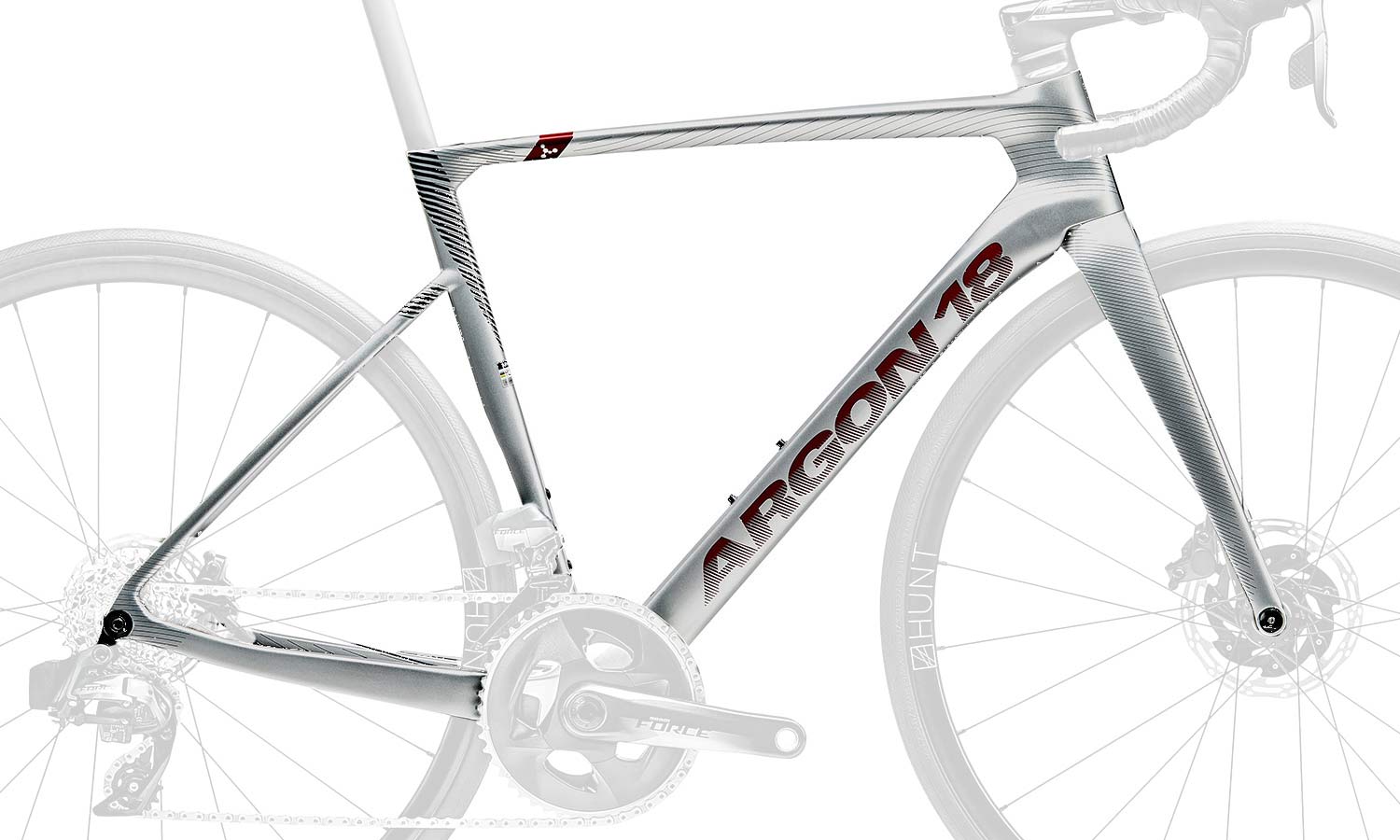 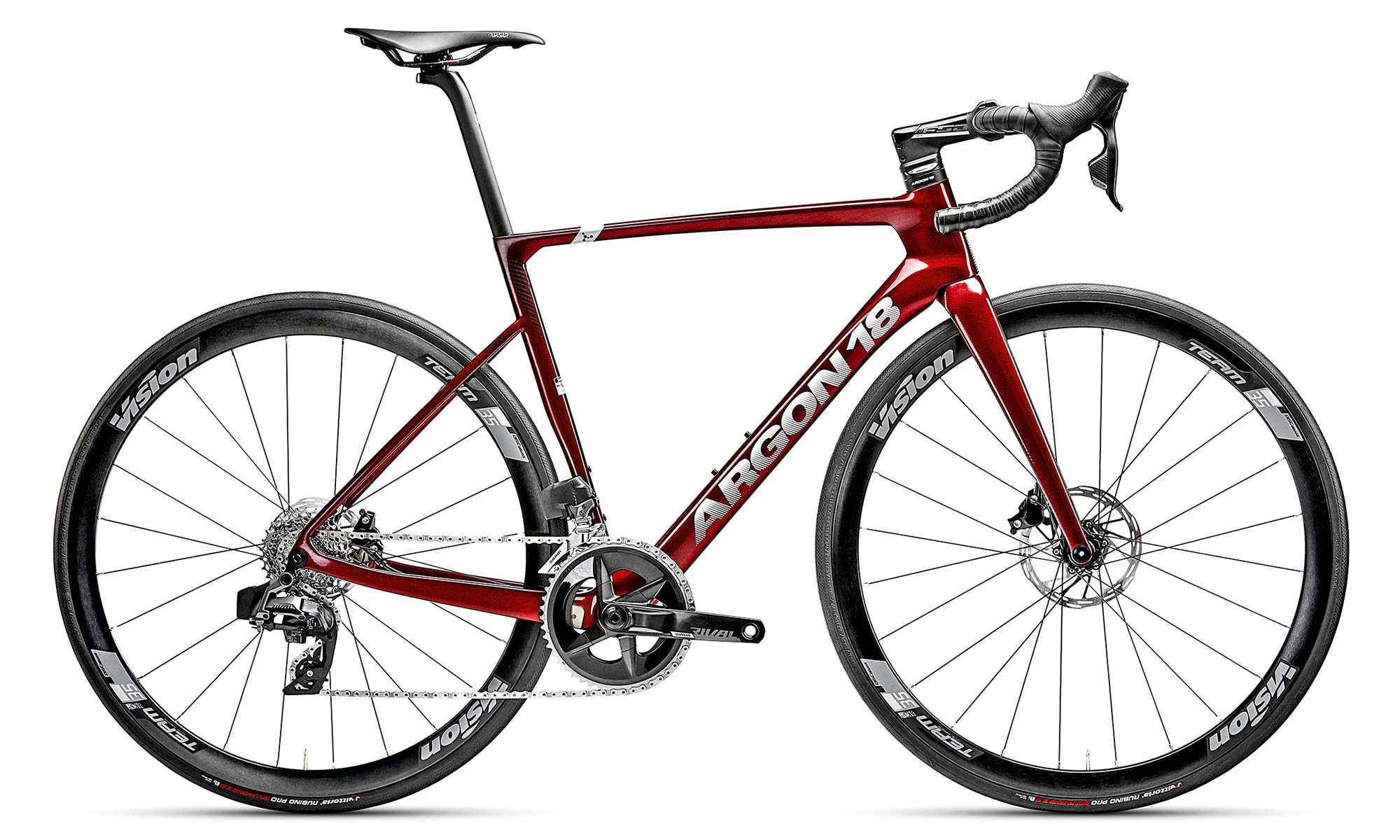 The new all-rounder Sum is also available in several complete bike build options depending on the market with SRAM Force AXS or Rival AXS eTap builds for the most part. A Sum Elite Rival AXS complete bike starts from $4900 (or $6500 on the Sum Pro frameset.) 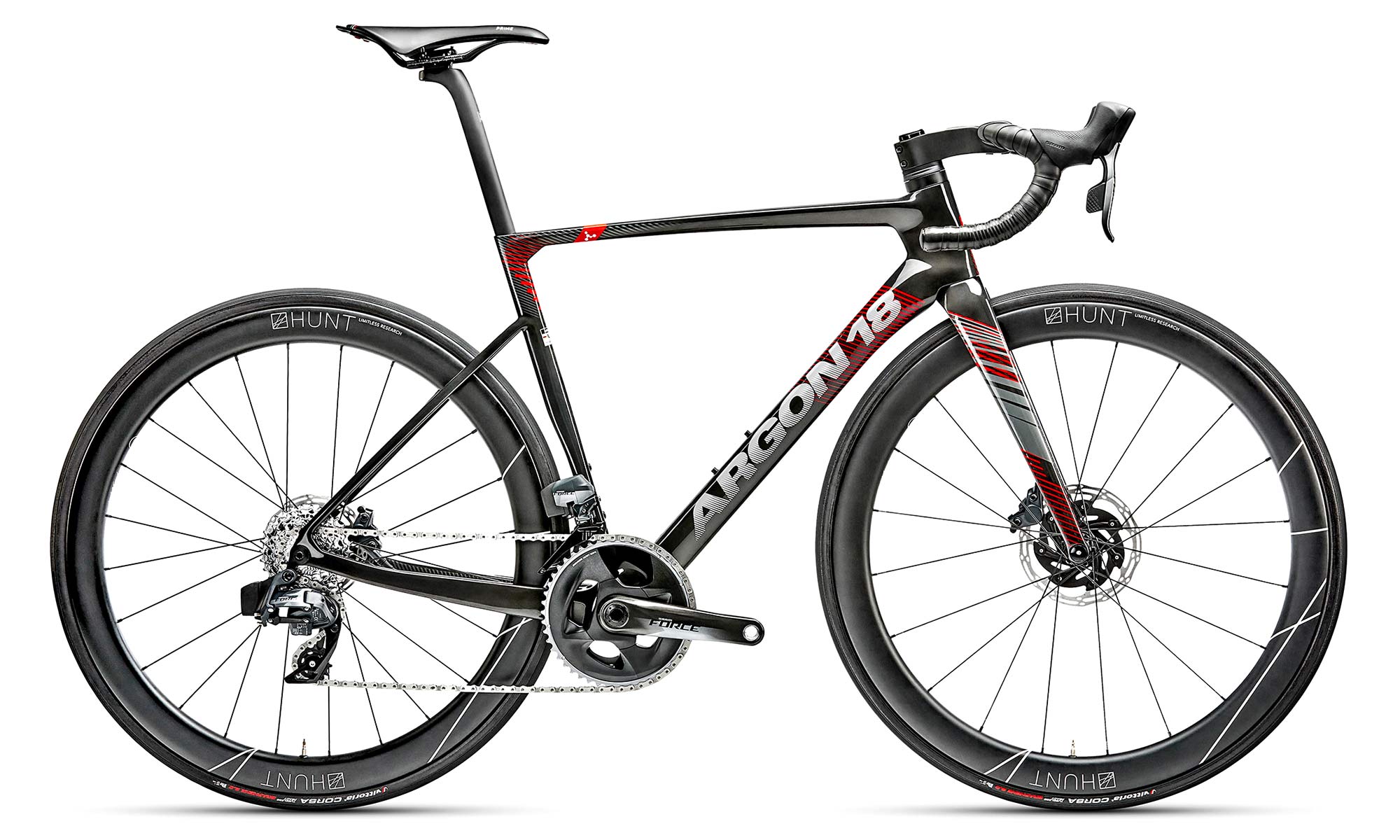 And this higher-spec Sum Pro Force AXS build with Hunt 48 Limitless carbon wheels ratchets that up to $8250. But it looks like you’ll still have to wait a while.

Even though Novo Nordisk already has their fleet, consumer bikes aren’t expected to arrive in Argon 18 dealer bike shops globally until “late 2022”. Ask your local shop for a more detailed estimate if you need a new race bike.

Every year the bikes get faster but riders don’t…