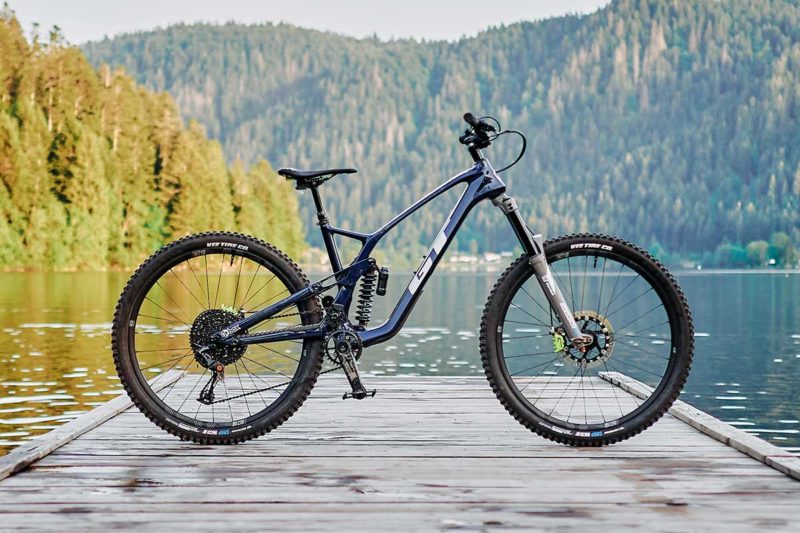 The 2022 GT Force Carbon has arrived with the high-pivot linkage tuned suspension platform proven on the GT Fury DH Bike. Rolling on 29″ wheels only, the Force Carbon runs a 160mm travel rear end with a predominantly rearward axle path typical of high-pivot designs. We got a pre-launch peak at the new enduro rig at the Ard Rock festival… here’s everything you need to know. 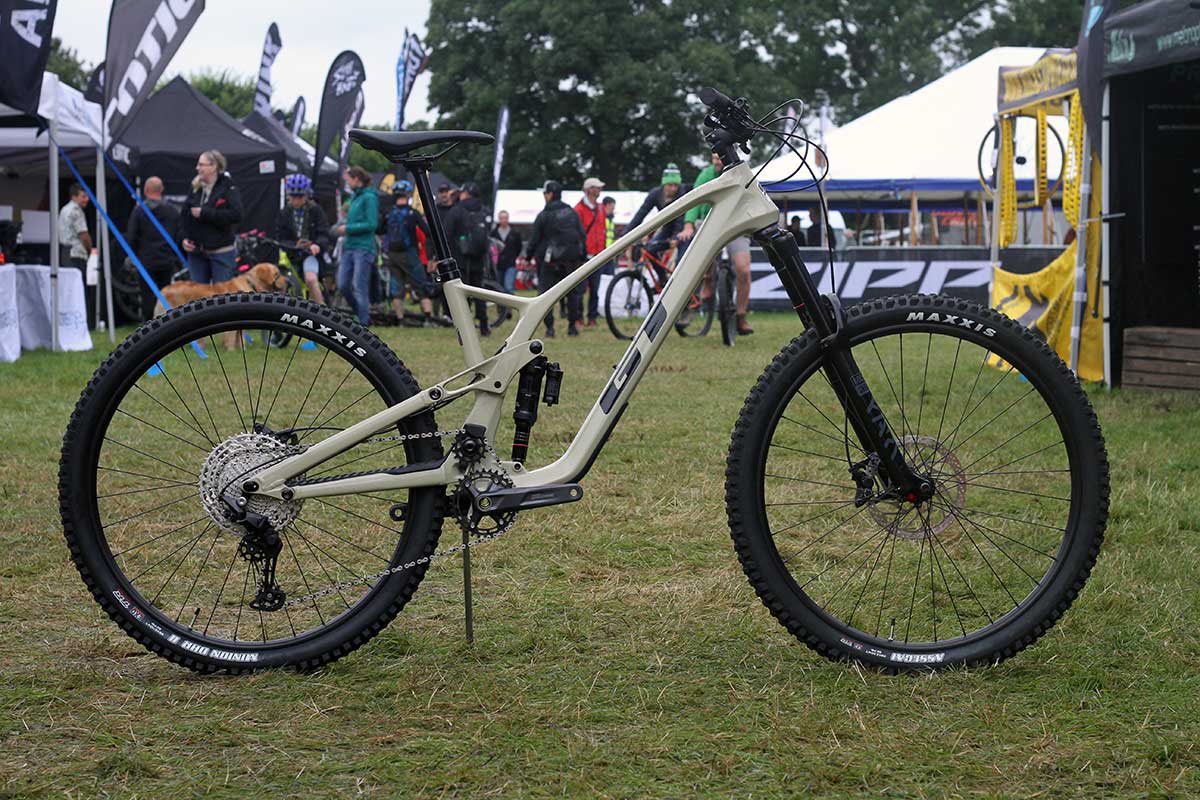 ‘Tis the year of the high-pivot, it seems. Following the Norco Range and Cannondale Jekyll, the GT Force Carbon is the latest bike from the big brands to rock a high-pivot suspension platform. This isn’t new for GT, though. They already have a successful production bike running the high-pivot LTS (Linkage Tuned Suspension) in the form of the GT Fury DH Bike. Here, GT repackage that into a more pedal-friendly 160mm travel 29er enduro bike. 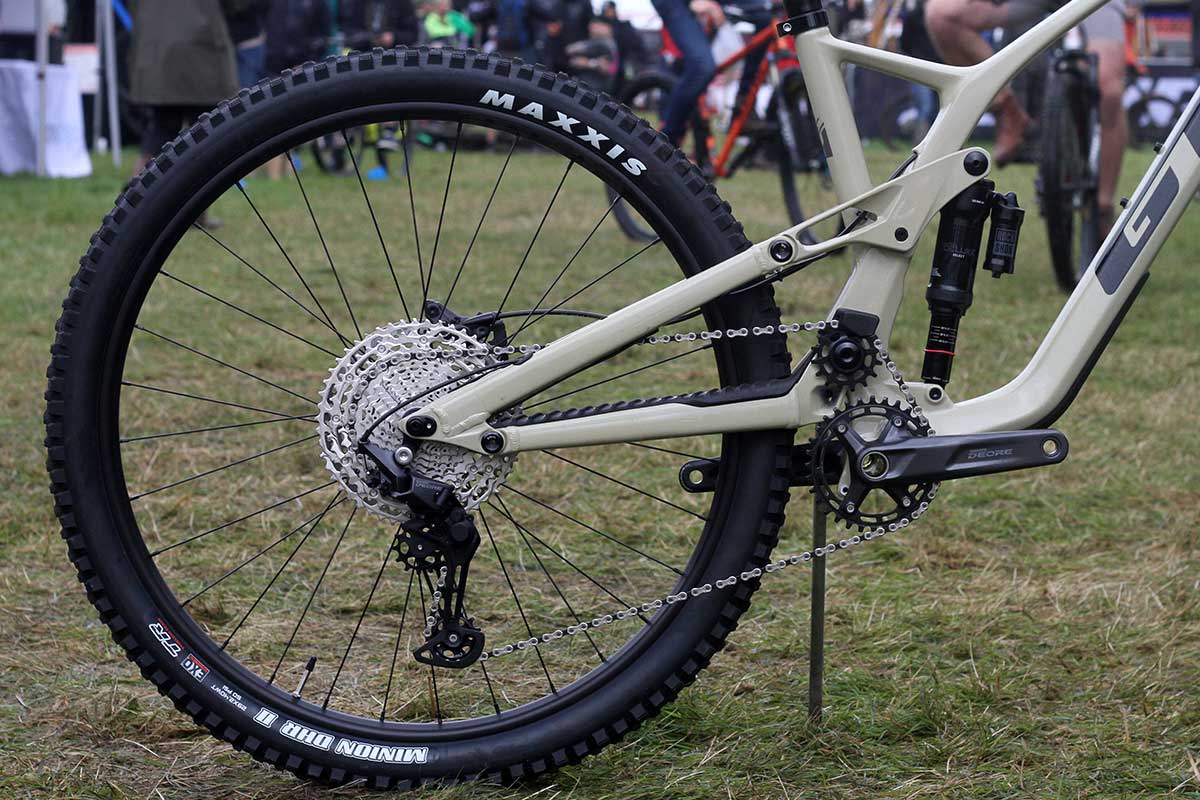 This is a grand departure from the Horst-Link suspension seen on Wyn Masters’ previous GT Force (which he actually ran as a mullet). The new layout has a dramatic effect on the bike’s leverage curve, axle path and anti-squat numbers… as we shall see. First, let’s take a look at the geometry. 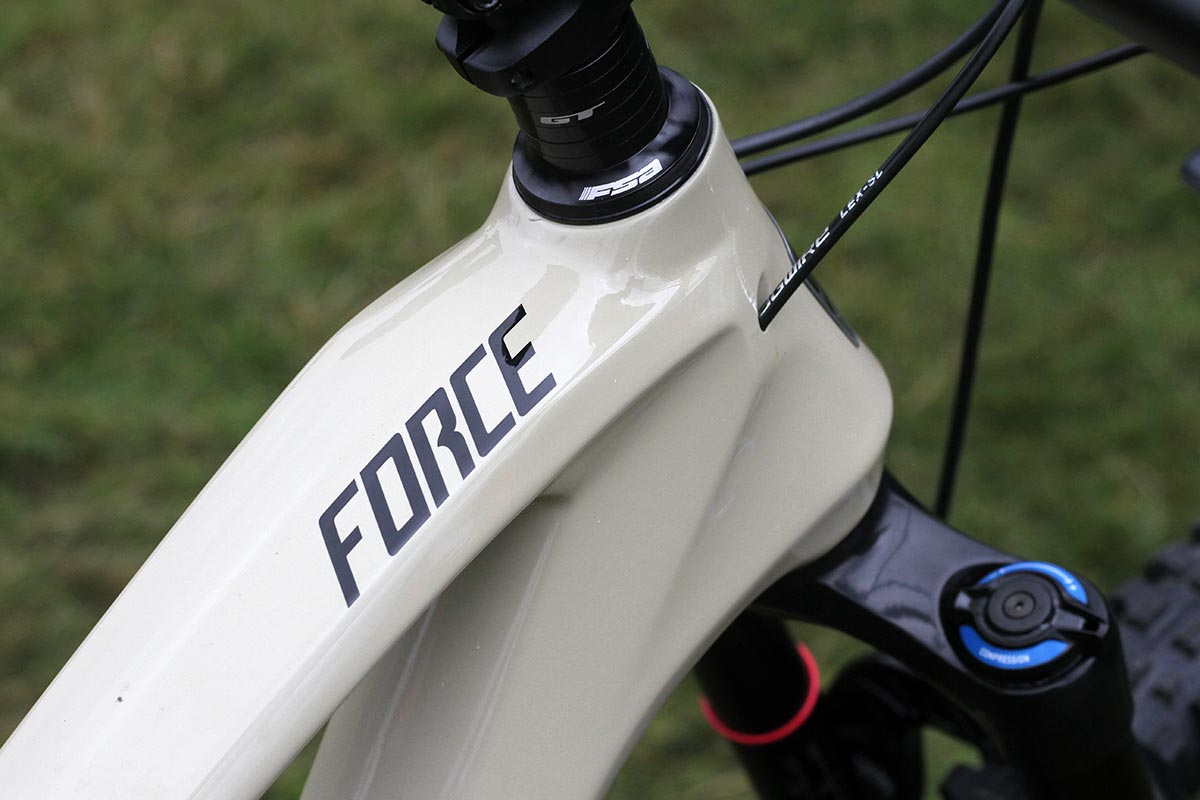 The GT Force Carbon is available in four frame sizes; S-XL, with reach figures stretching from 430mm to a generous 515mm. It loses the lower shock mount flip-chip for geometry alterations, but gains one at the dropouts to allow for 10mm chainstay adjustment. 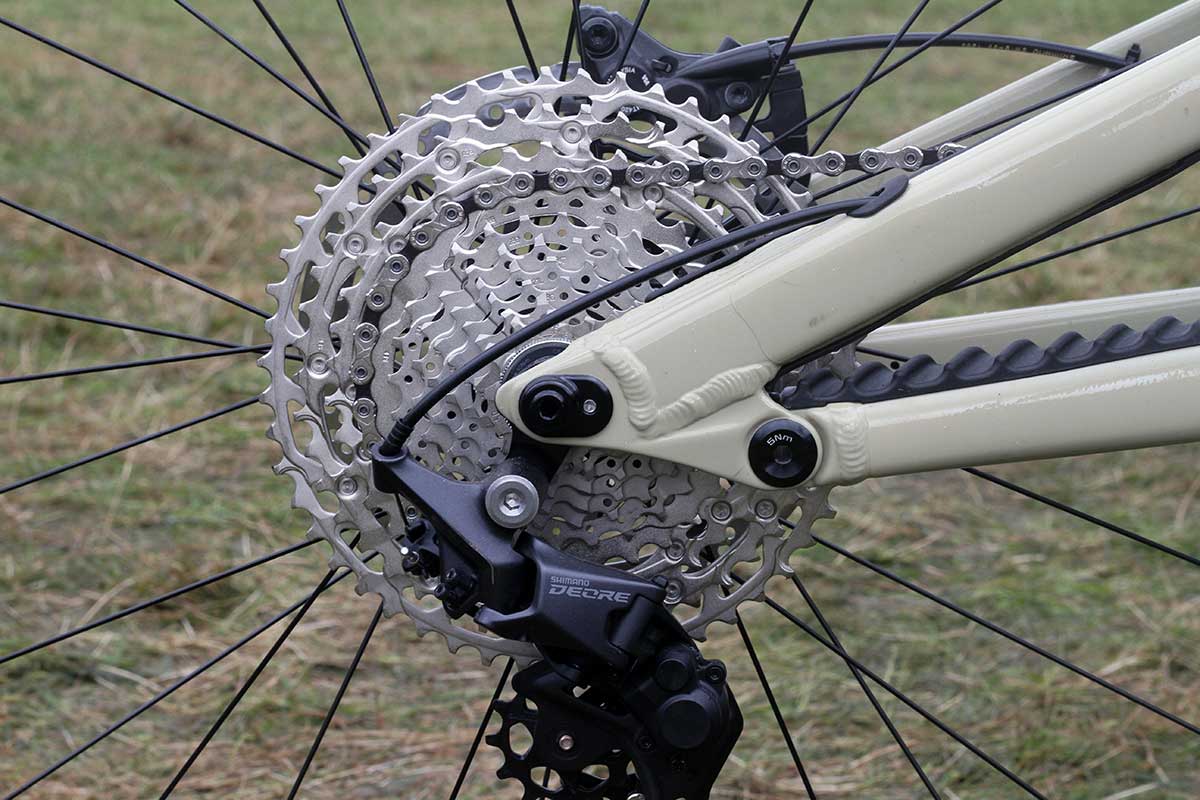 The GT Force Carbon we saw at Ard Rock was set up in the long chainstay configuration with a 2.4″ Maxxis tire

This allows riders to switch between a 435mm and 445mm chainstay length. While the Small and Medium frames will ship in 435mm and the Large and XL frames in 445mm, there’s nothing to stop you running long stays on the small frame, and likewise short stays in the XL. The only real consideration here is tire clearance; we’re waiting to hear back from GT as to how much each config offers. 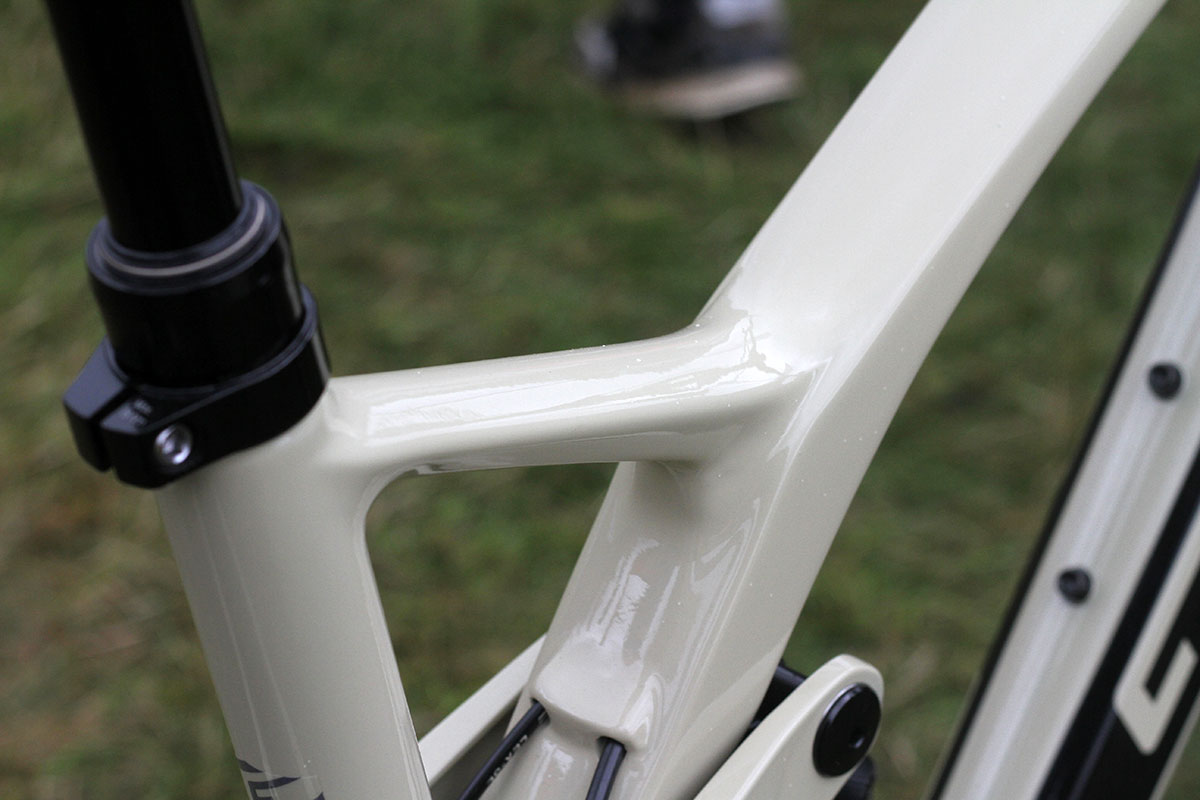 Seat tubes are fairly short (410mm in medium), resulting in lower standover figures than what we saw for the previous frame. The seat tube sits nice and upright at a pedal-friendly 78°. That’s paired with a slack 63.5° head angle that will no doubt be very welcome on steeper terrain. The bottom bracket itself sits at 347mm, slightly lower than that seen on the 2020 Force in its lowest configuration. 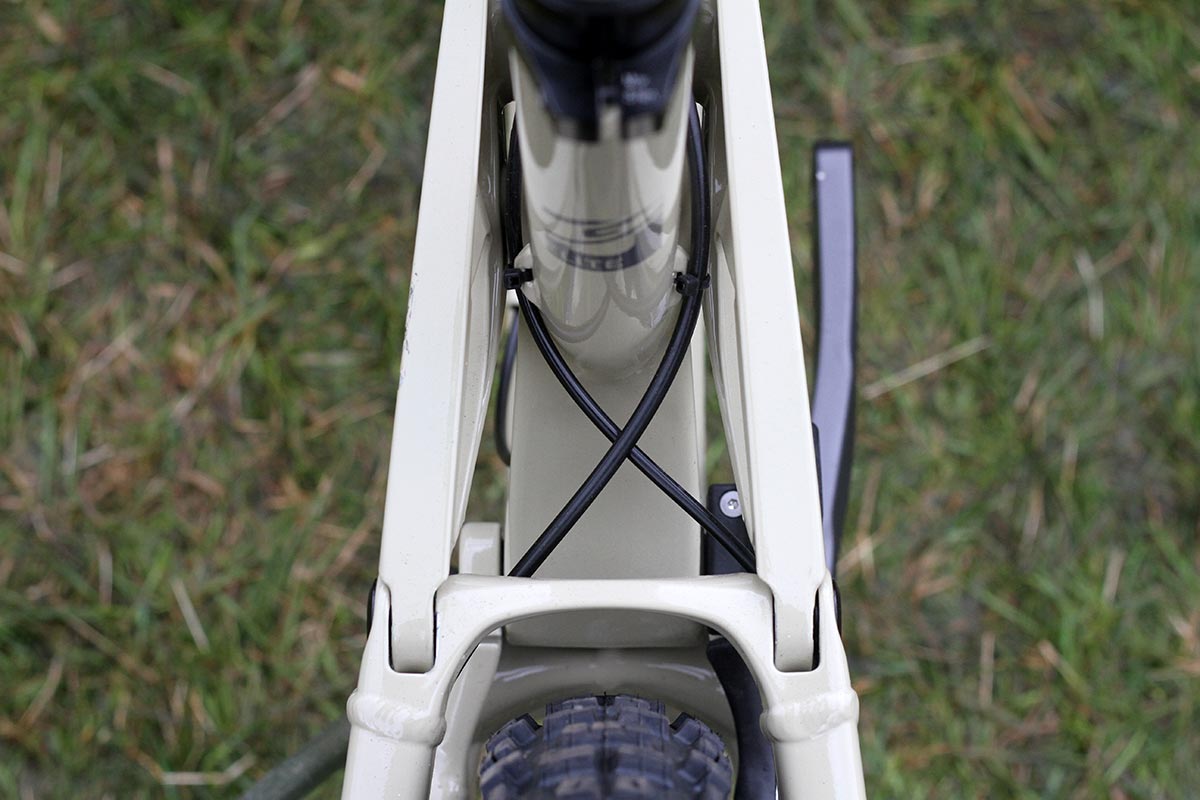 The new GT Force Carbon gets internal cable routing. That’s tube-in-tube guiding throughout the front and rear triangles, allowing you to simply feed the cable in one end, and watch as it satisfyingly pops out the other, hassle-free 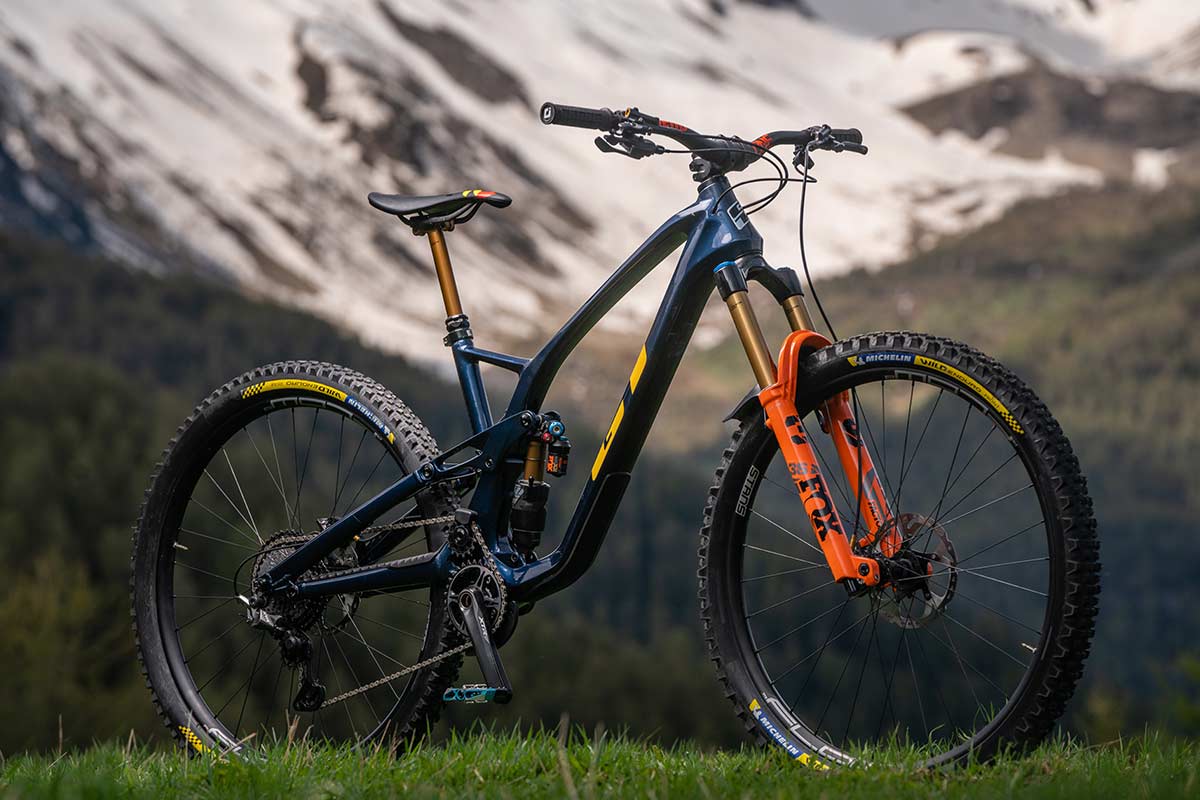 Tying those modern geometry figures together is the High-Pivot LTS layout we see on the GT Fury, repackaged to deliver a predominantly rearward axle path on a 160mm travel bike. 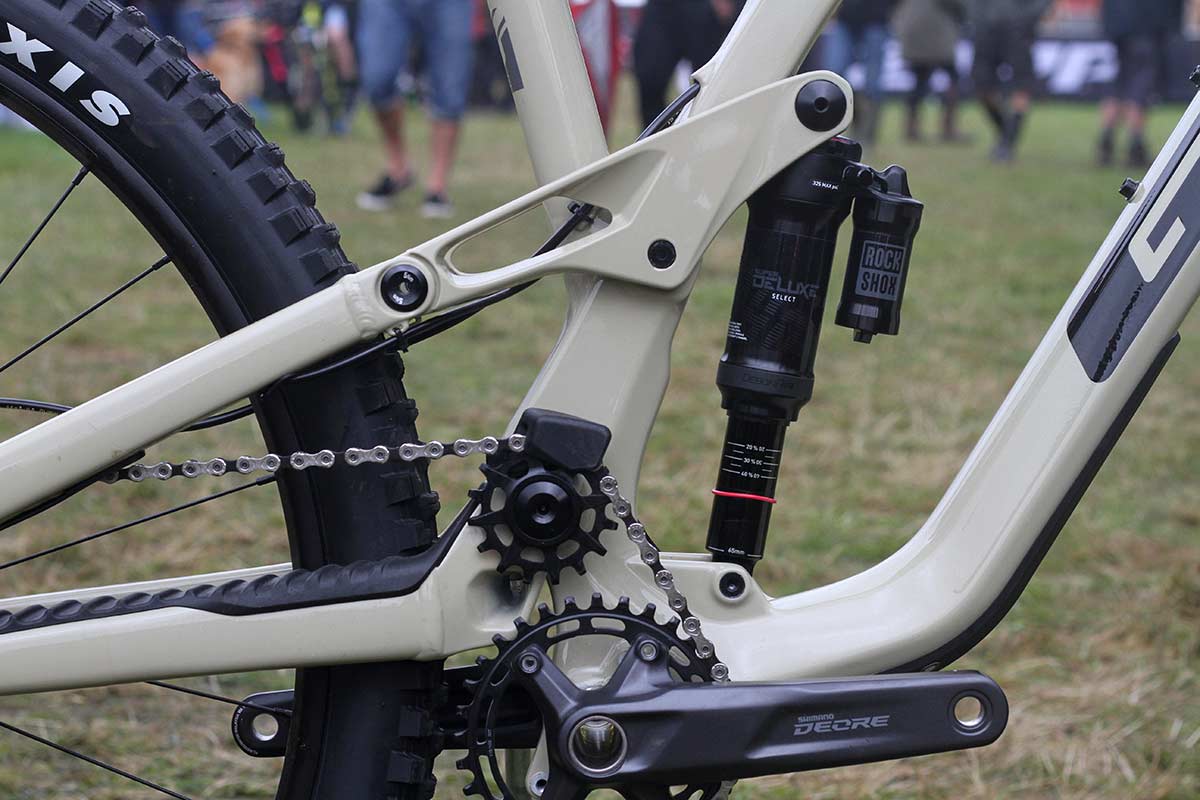 The idler (with integrated chain guide) that sits concentric to the main high-pivot routes the chain such that the movement of the suspension is free from drivetrain forces, minimizing pedal kickback

Most bikes running the common Horst-Link layout, including the previous GT Force Carbon, have a forward axle path, resulting in a net loss effective rear-centre length as the bike is pushed through its travel to bottom-out. The new Force, like other high-pivot bikes, actually sees net growth in rear-centre length between the unloaded state and bottom-out. It’s not much (maybe 3mm). The important bit here is that, from the sag point, the rear axle initially tracks a rearward path as it is pushed further through its travel. That compares to the previous frame where the exact opposite is true. On the new bike, the axle extends rearward as far as 11mm just beyond the mid-point in the travel.

So what? Well, a lot of industry folk (marketers) say that this allows the rear wheel to move up and back, out of the way of roots and rocks, allowing the bike to carry more speed through rough terrain. We’re hoping to swing a leg over the new GT Force Carbon very soon, to see for ourselves. 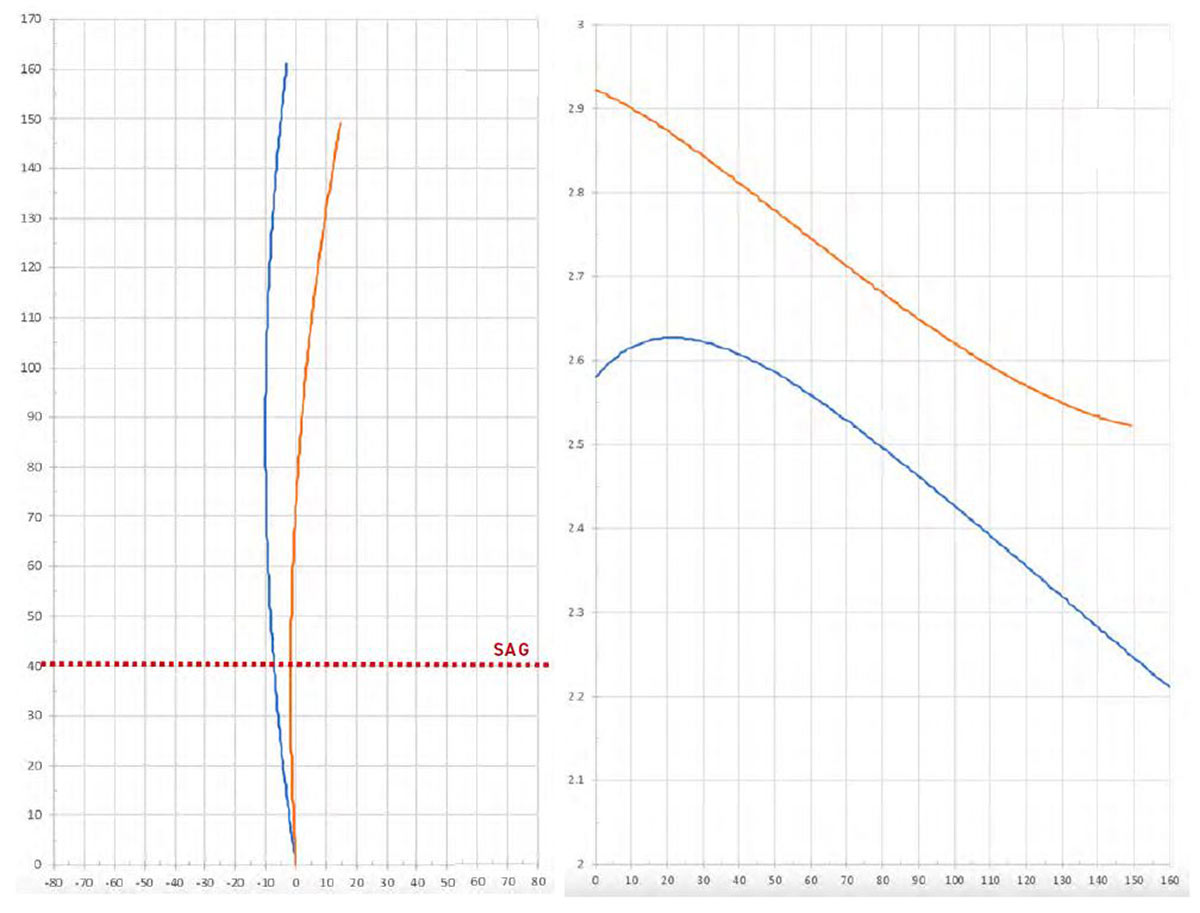 What about the leverage curve? GT say they have increased the “usable” progression (that measured from sag to bottom-out) from 10% to 12.5%. The leverage ratio is regressive initially, from the unloaded state to the sag point. Thereafter, the ratio decreases from 2.6 to 2.2 around the end-stroke region. GT say the changes have improved the bike’s pump-ability. Though all three models are spec’d with an air shock, the Force Carbon also has clearance for a coil, and is said to work well with the linear spring rate.

The new linkage also has a big impact on anti-squat and anti-rise numbers. GT say they have increased the anti-squat for the gears between 32:21 and and 32:50, allowing the bike to accelerate more efficiently over this range. For the smallest cog on the cassette (10T) anti-squat is significantly decreased at the point of sag. As compared to the previous Force Carbon, the new bike has increased anti-rise from 60% to 70%, meaning the suspension is more active under braking, suffering from less dive at higher speeds. 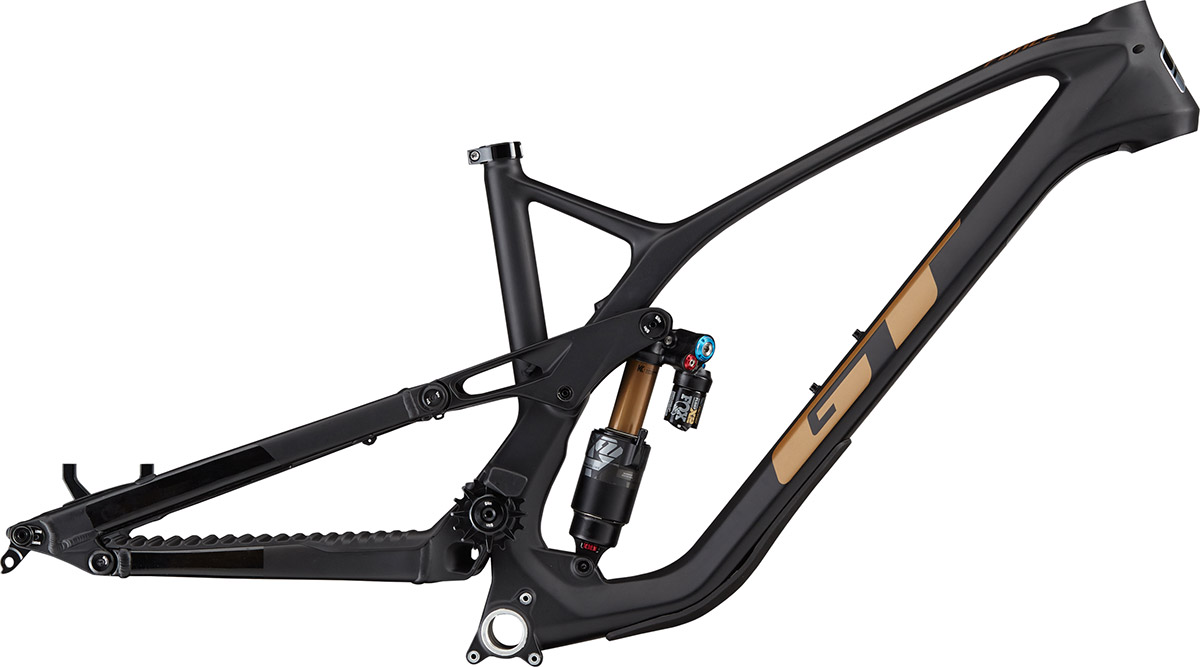 The 2022 GT Force Carbon is available in three complete build models; Pro LE, Pro and Elite. It is also available as the frame and shock only for $3300; that’s with a FOX X2 Factory shock and a matte black finish with bronze decals. 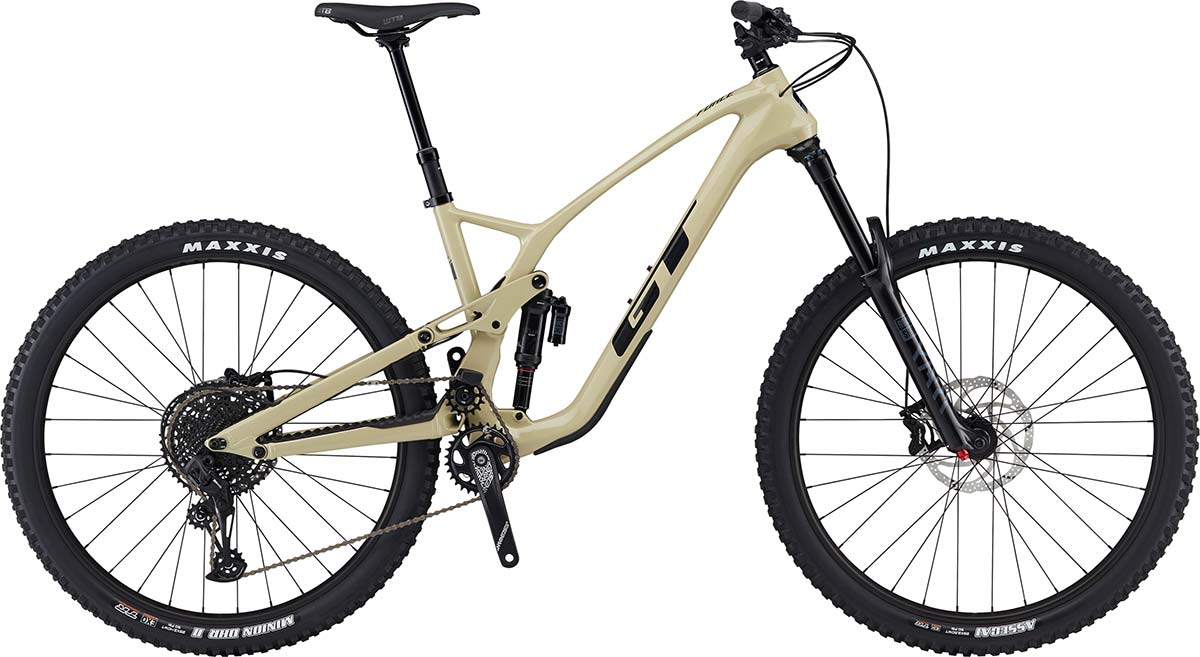 The Elite model sits at the more budget-friendly end of the spectrum, retailing at $3,800 USD. It gets a RockShox Yari 170mm fork with RC damper, a Super Deluxe Select shock, WTB ST i29 rims on Formula hubs, a SRAM SX Eagle 12 speed drivetrain and TRP Slate T4 4-Piston brakes. 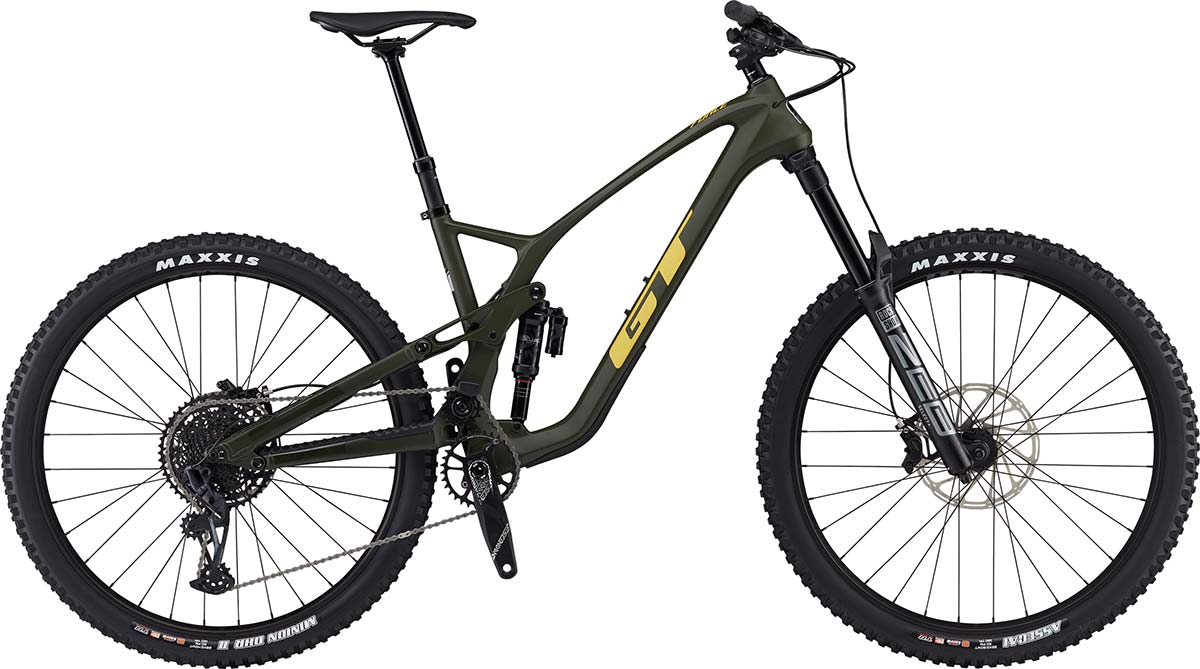 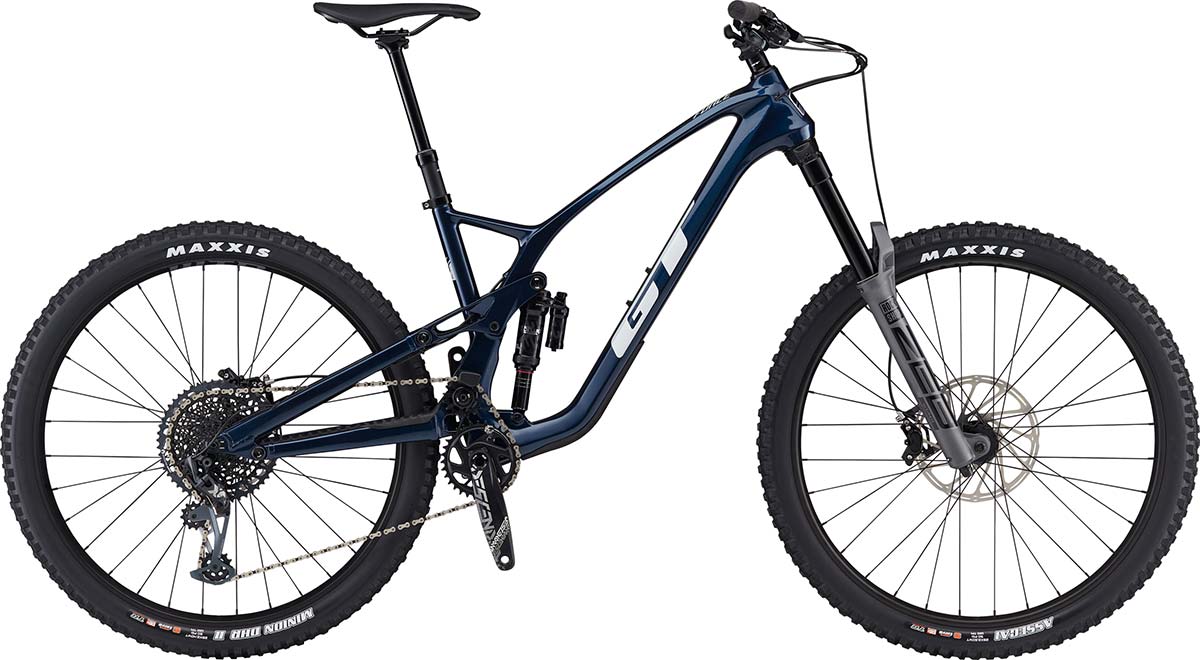 The Pro LE is the top-end GT Force Carbon money can buy. It retails at $6,000, a price tag that gets you the RockShox Zeb Ultimate fork, Super Deluxe Ultimate shock, a SRAM 12 speed drivetrain consisting of GX and XO1 components, and SRAM Code RSC 4-Piston brakes.

They have the numbers on the rear suspension pretty dialed. Now make a 160 front 145/150 rear trail bike . 430/440 chain stay , keep the 78deg seat angle , give me a 66deg head angle and bit shorter TT , Trail bike that weighs under 30lbs for under 6k US . That’ll be a bike that sells to the masses I think . At least me anyway. I need a bike that’ll turn and rip the corners , do the switchbacks , climb the steeps without doing a wheelie , crush the roots n rock gardens and go down fairly steep stuff and feel safe .

From the profile the bike looks cramped.