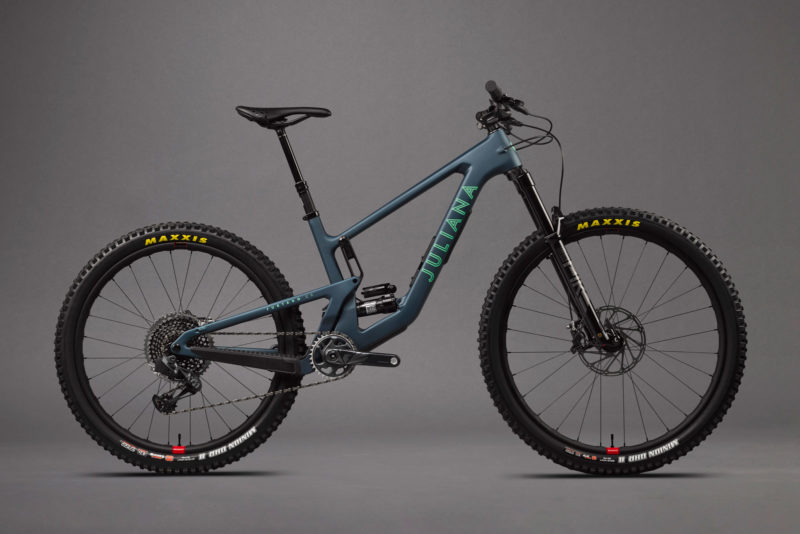 Released in parallel with the 2023 Santa Cruz 5010 is the 2023 Juliana Furtado, the new 130mm trail bike from the two brands. Gone is the complete 27.5″ wheelset, replaced by a mullet setup, with new suspension kinematic and geometry figures said to give rise to the “best handling trail bike ever”. Bold, right? But, interest-piquing nevertheless. 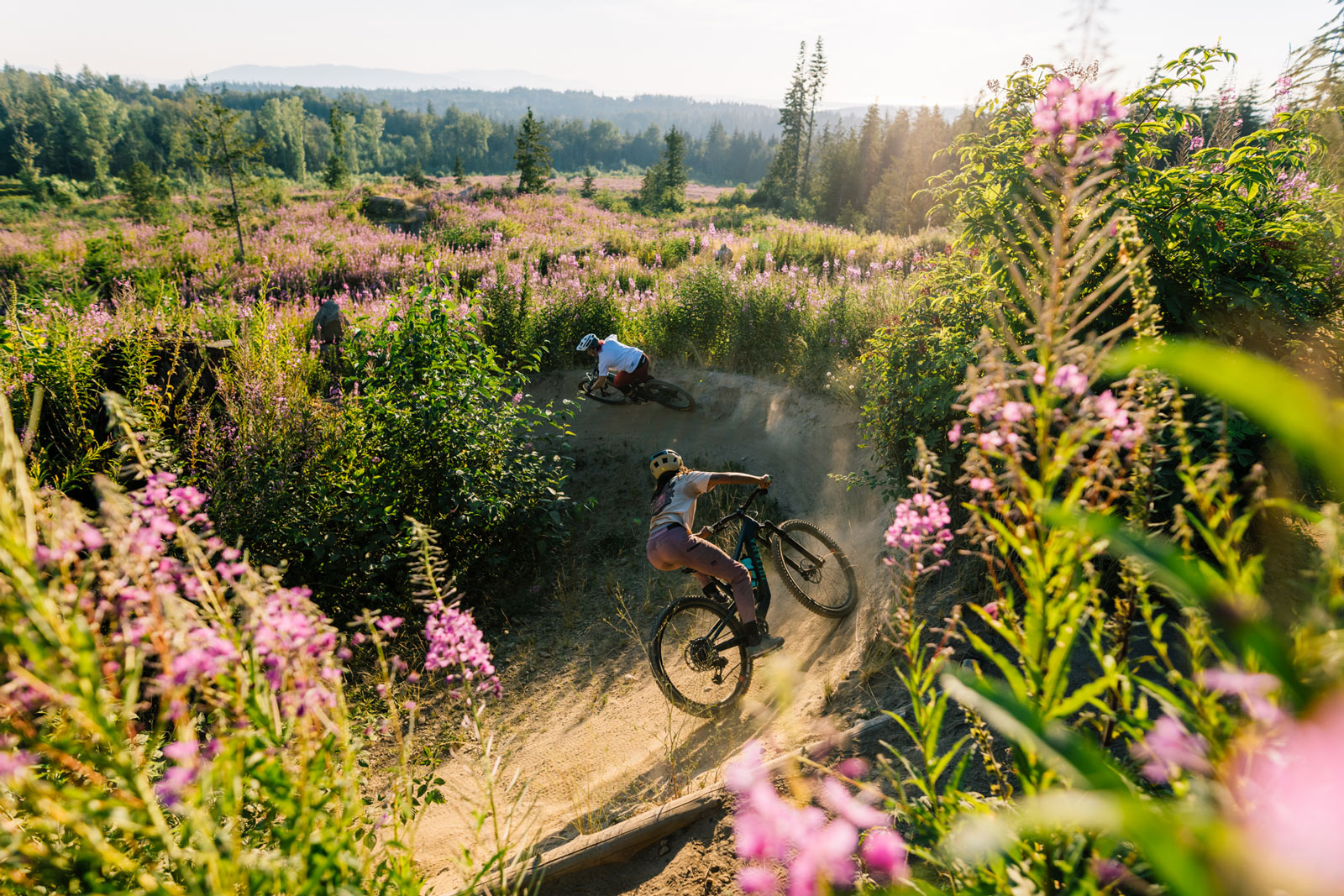 Just as the Santa Cruz Bronson is to the Juliana Roubion, the Santa Cruz 5010 is to the Juliana Furtado. The bikes run the very same frame, but the Furtado is targeted at a different market segment traditionally made up of women. The major difference between the framesets is the shock tune, slightly lighter on the Furtado in line with the fact that, on average, women are lighter than men. They also differ in terms of touch points; i.e. saddle and grips, and they are offered in different colors, too.

The Furtado is limited to sizes XS-M, each benefiting from a size-specific carbon layup meant to tailor the stiffness properties for a consistent ride feel across the size range. So, if a reach of 459mm is too small for you, look to the new 5010 for longer options. 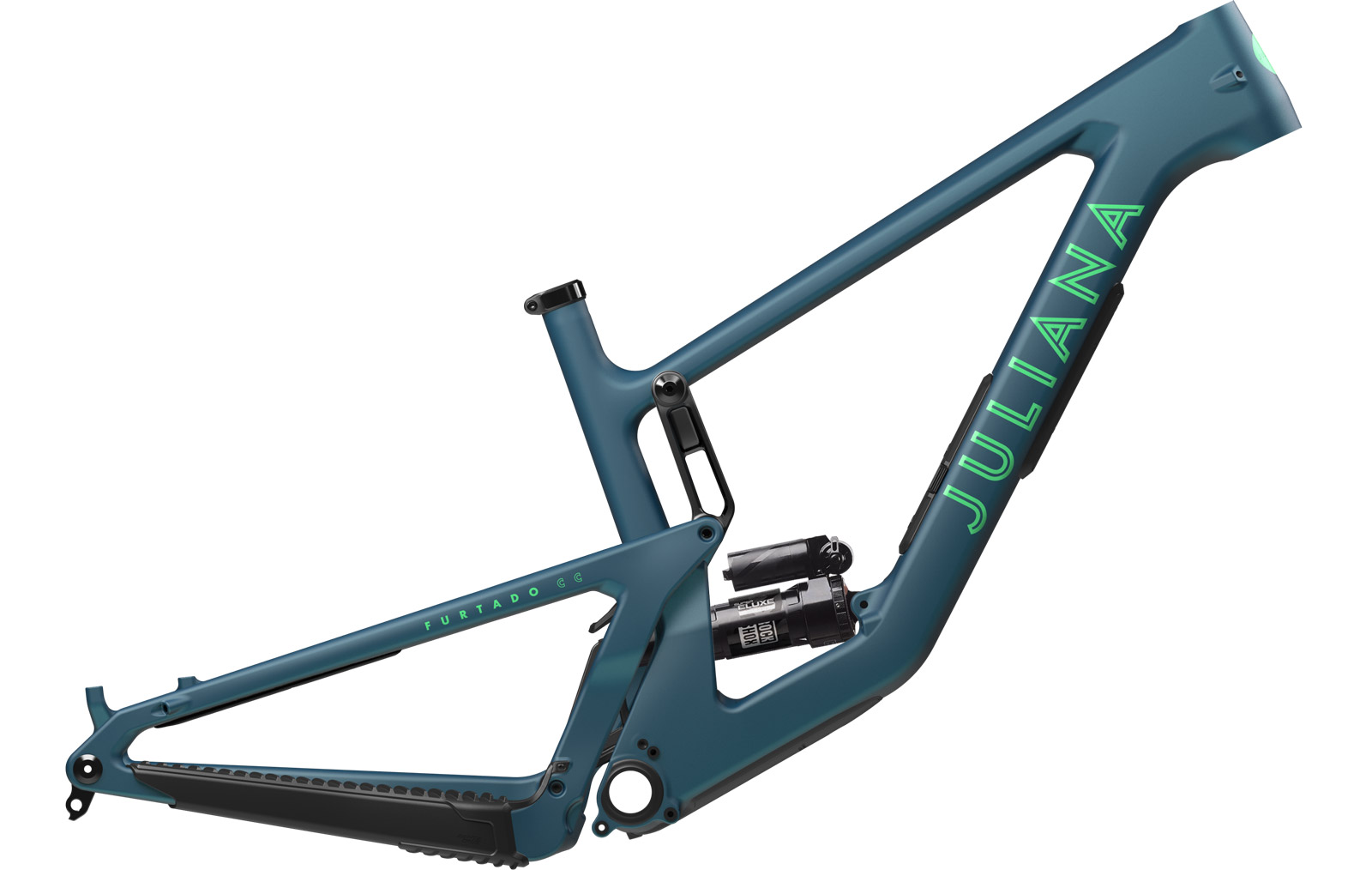 The 2023 Juliana Furtado runs a threaded bottom bracket, an IS headset, a SRAM UDH and Boost 148mm spacing with post mount for a 180mm brake rotor. Cable routing is internal and fully guided throughout.

The big news for the 2023 Juliana Furtado is its new mixed-wheel size platform. It couples the easy rollover of a 29″ front wheel with the maneuverability of a 27.5″ rear, packaged into a 130mm trail bike package. The same VPP-linkage drives the rear shock to deliver that rear wheel travel, while a 140mm fork handles bumps and compressions up front. 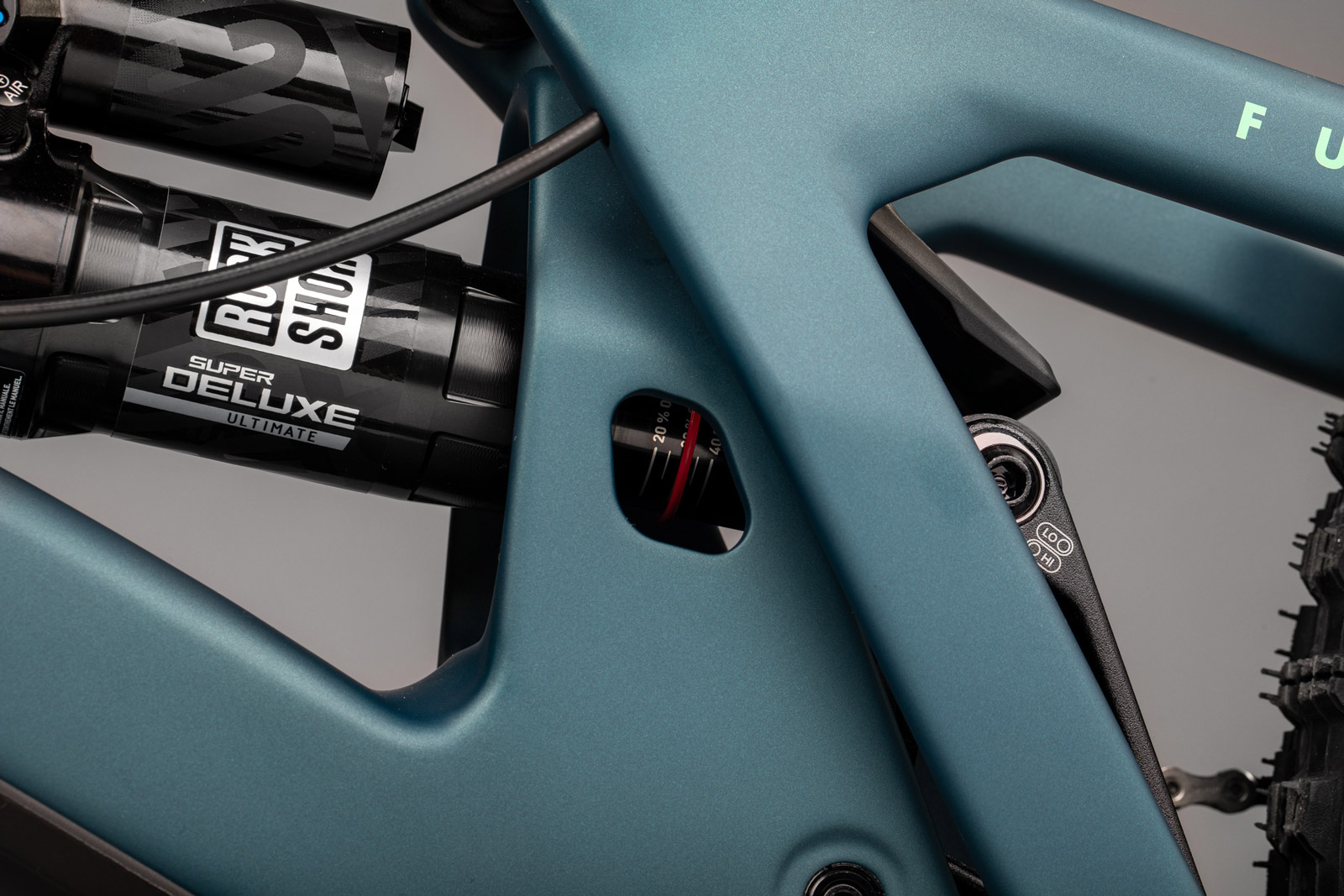 Setting sag is crucial to getting any bike to ride the way a manufacturer intends it to. But, it hasn’t always been super easy to check sag on Santa Cruz and Juliana frames. They’ve addressed that for this model year, introducing a sag window on the non-drive side of some frames to give the rider a better view of how far the o-ring has been pushed along the shock’s shaft. 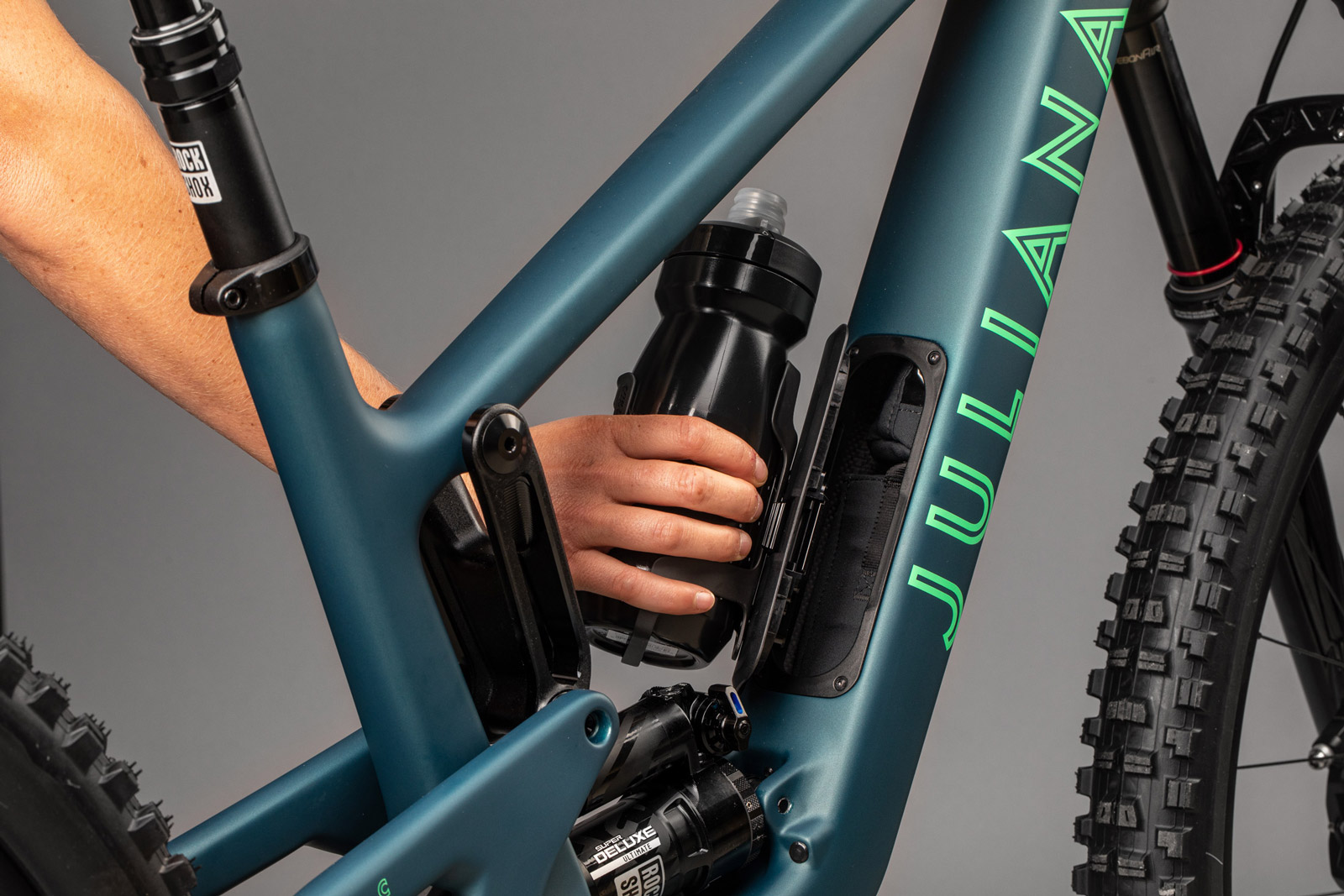 The low-slung rear shock leaves plenty of space inside the front triangle for a water bottle, bosses for which are found on top of the Glovebox. That’s the storage compartment within the downtube, inside which you can stash whatever small bits you deem essential for your ride; Pick Up Bars, Jelly Babies, etc… Writing more responsibly, it does come with a Tool Wallet and Tube Purse to encourage the carrying of trail-side repair essentials. 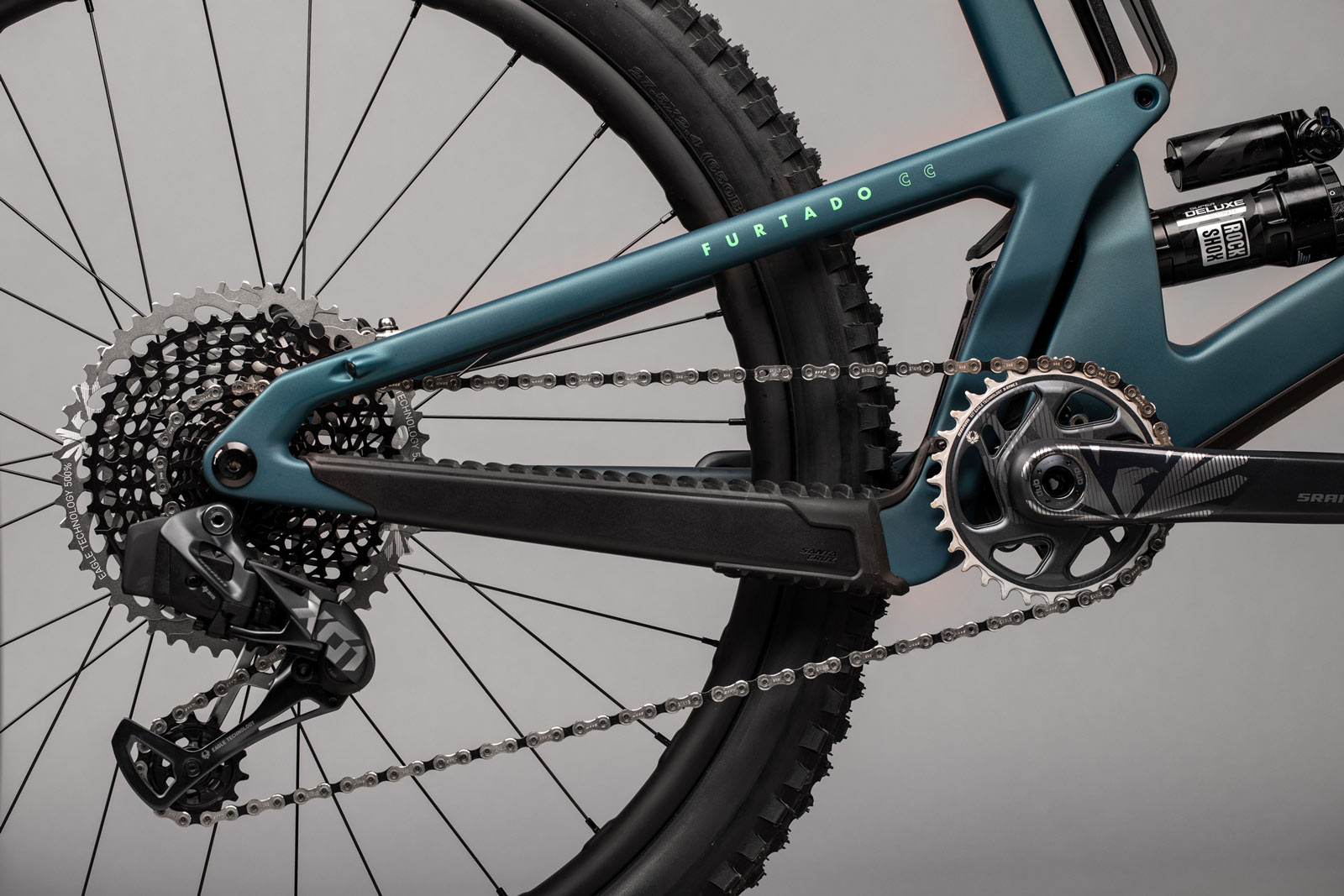 The Furtado’s linkage has been tweaked for 2023, seemingly to prioritize the bike’s descending capabilities. That centers principally on the bike’s anti-squat character. You can read more about what anti-squat is here. Briefly, it describes how much the suspension is able to resist compression induced by the load transfer that occurs during acceleration, i.e. when you pedal hard. For the purposes of understanding the below graph, at an anti-squat value of 100%, the suspension neither compresses or extends during acceleration. 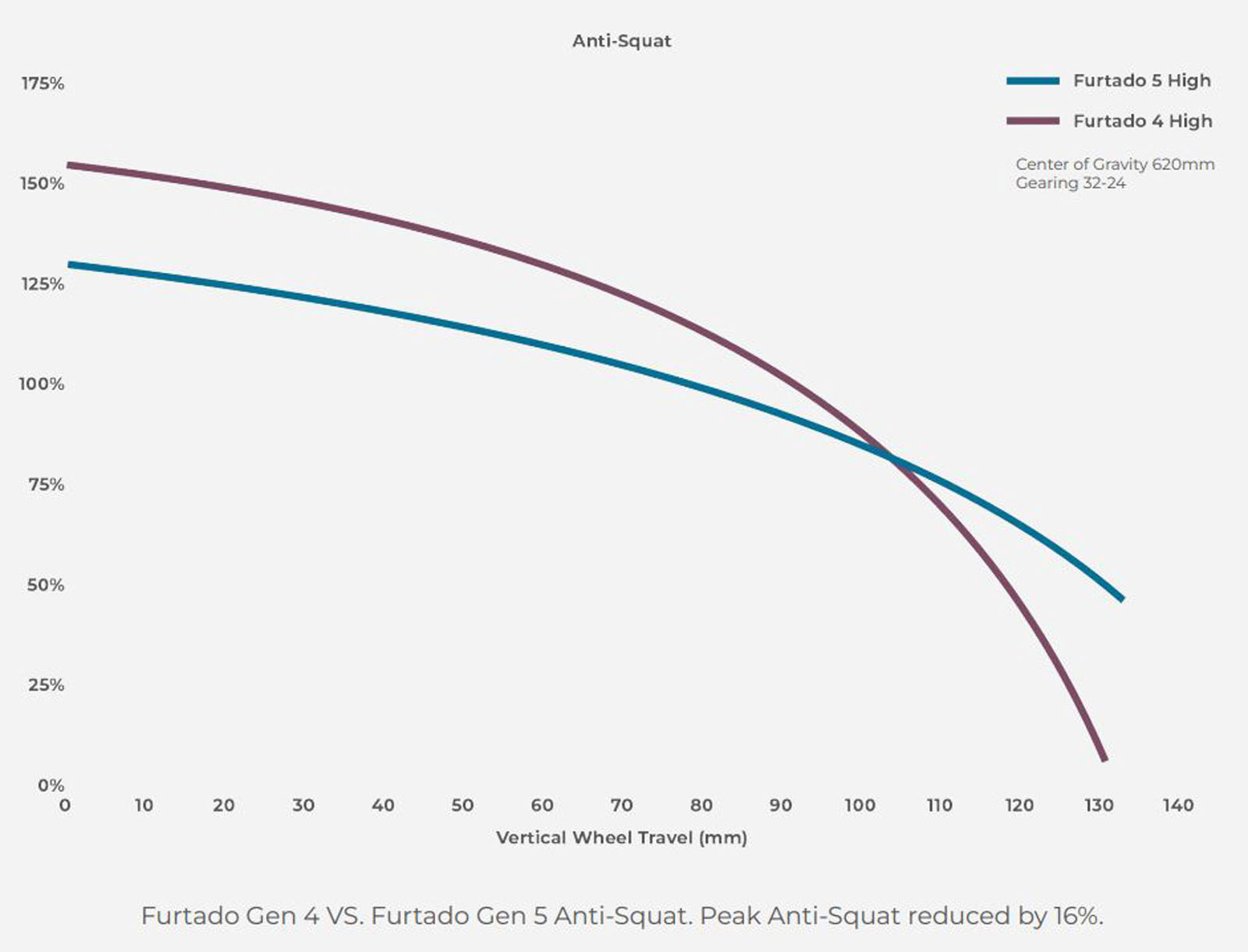 So, as compared to the previous Furtado (the V4), the 2023 frame has lower anti-squat values through 80% of its travel. Juliana tell us this translates to more sensitive, ground-tracking qualities and reduced effects of pedal kickback. In reality, that all very much depends on the rider’s height and what gear they are pedaling in, but you get the intention here. 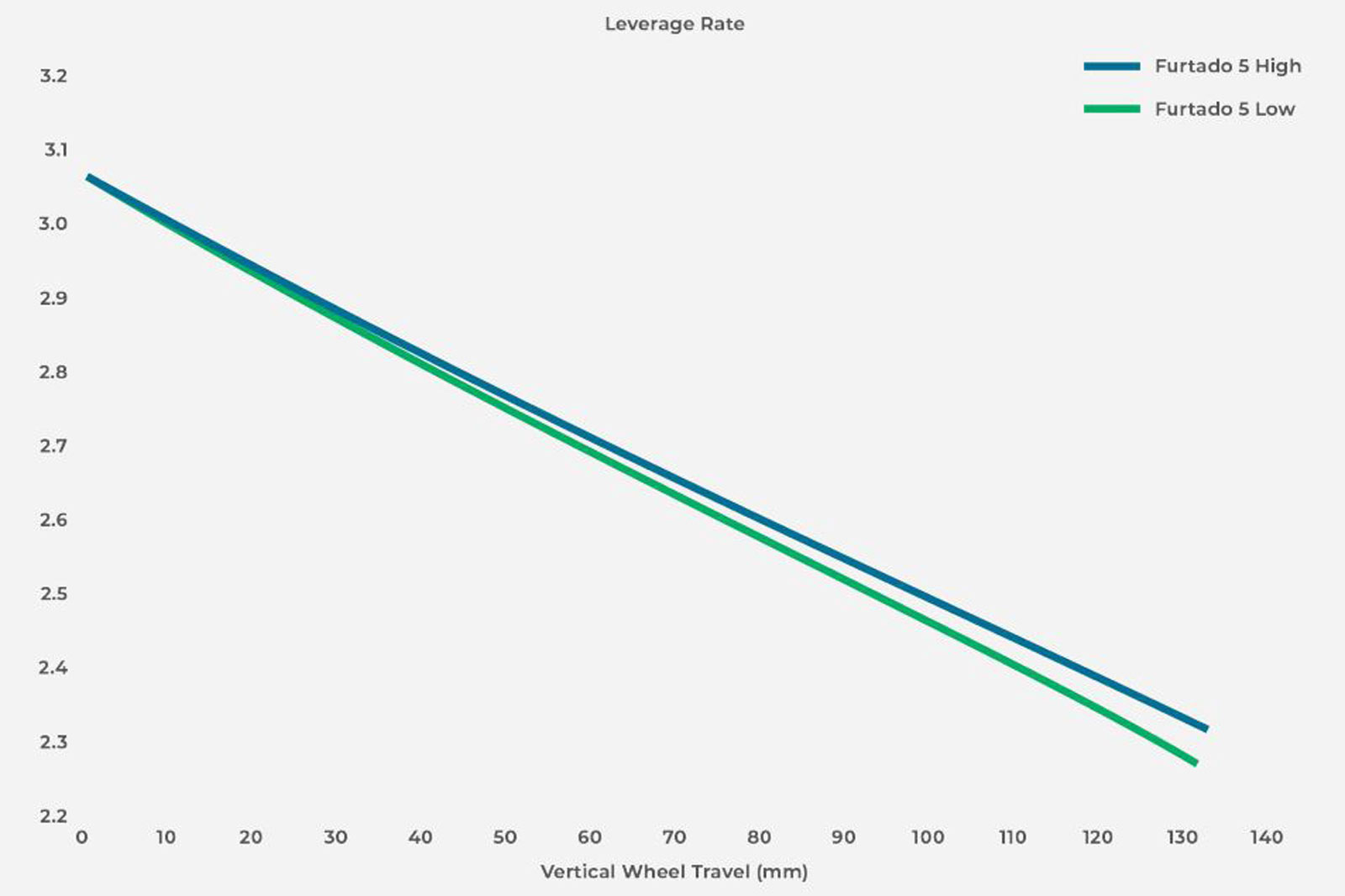 The linkage’s progressive leverage curve is said to result in a bike that is well able to handle big compressions, with the absence of the jarring feeling you might expect from a bike with these travel numbers.

What about the Furtado’s geometry? 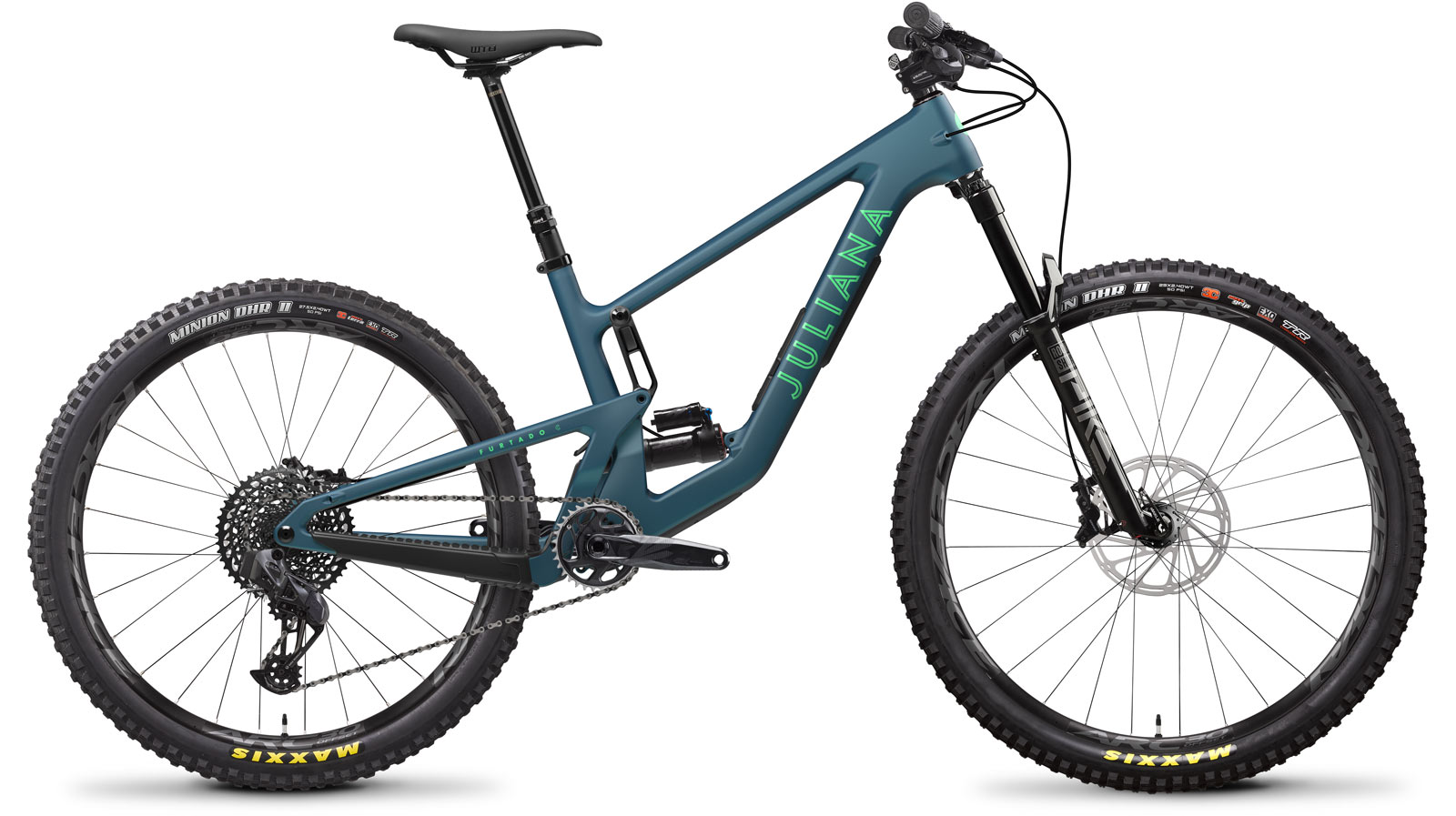 The 2023 Furtado is slacker than its former self, now sporting a head angle of 64.9° in the slackest setting. It retains a flip-chip at the lower shock mount necessary to switch the bike’s geometry between the Hi and Lo settings; the former gives a higher bottom bracket (338mm) with more ground clearance, better suited to undulating terrain and technical climbing, while the latter results in a lower, slacker geometry better suited to descending steeper terrain and railing turns. 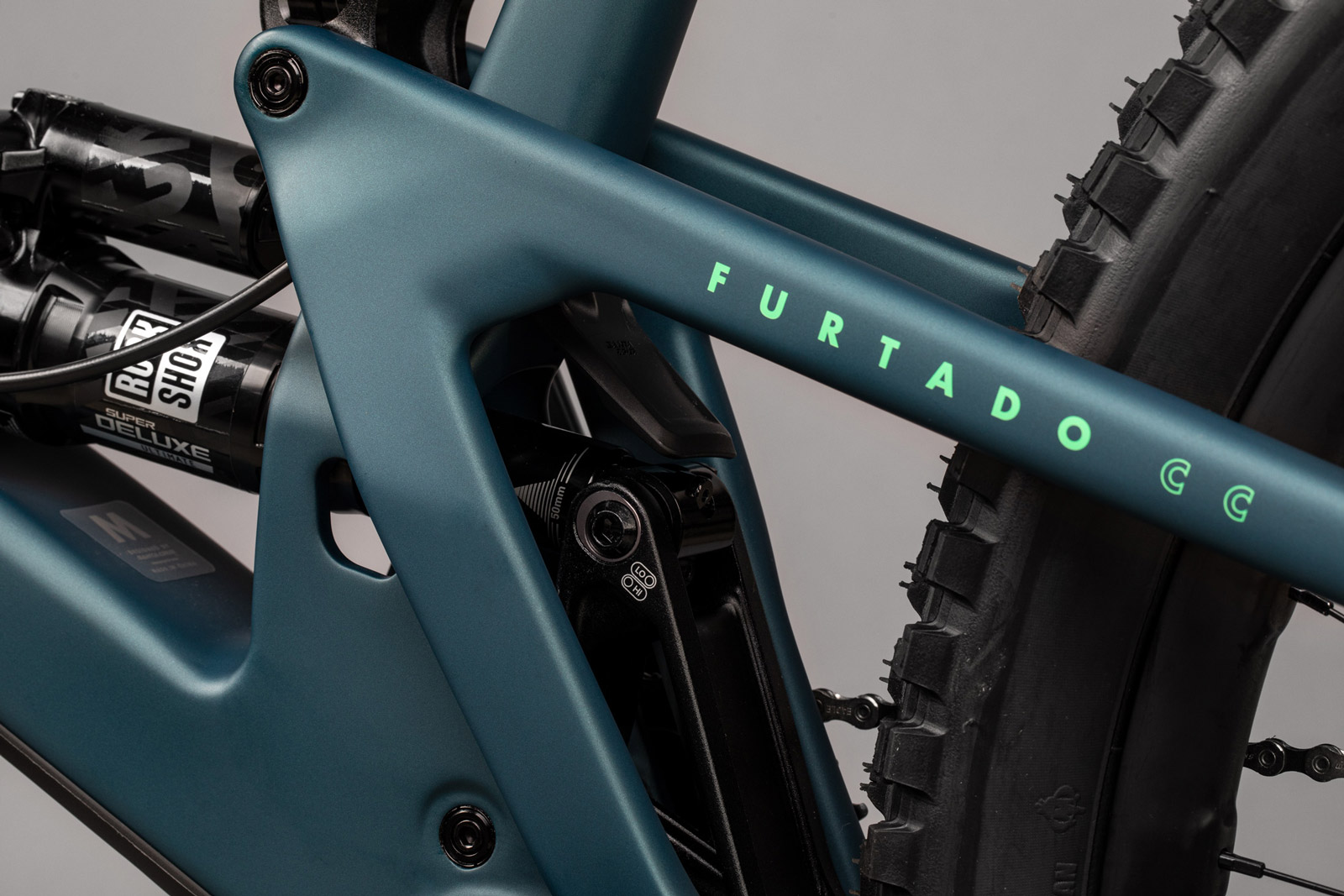 The difference between the Hi and Lo settings is very subtle; there’s only 3mm difference in bottom bracket height and 0.3° at the head angle.

The 130mm Furtado is available in sizes XS-M, all of which are slightly longer than the respective frame sizes of the previous iteration. Reach options include 406mm, 431mm and 456mm. Seat tubes are very short (370mm-405mm), with the purpose of allowing riders to benefit from as long a dropper post as possible.

As we’ve come to expect from Juliana and Santa Cruz, the bike’s chainstay length is frame size-dependent. Their somewhat proportional approach to rear-center length is continued on the 2023 Furtado and 5010 frames; as the reach grows, as does the chainstay length. The aim there is to give each rider, no matter what frame size they’re on, the same balanced ride feel. Thus, in line with the increased reach mentioned earlier, the rear-center length is slightly longer, too, coming in at 433mm on the medium as compared to the 426mm seen on the medium frame of 2021.

Leveling up on that is the Furtado C S MX. This one will set you back $6,799 USD, and is upgraded with a Rockshox Super Deluxe Select+ shock, a Pike Select+ fork, a 12-speed SRAM GX drivetrain, DT Swiss Hubset, SRAM G2 R Brakes, and a Rockshox Reverb Dropper Post.

Next on the pricing ladder is the Furtado G AXS MX, priced at $8,399 USD. It sports the same suspension components as the Furtado C S MX, but sees the addition of the SRAM GX AXS wireless electronic shift drivetrain. It also gets an Industry 9 1/1 hubset and SRAM G2 RS brakes.

The Furtado CC XO1 MX sees a jump in price to $8,799 USD. Notable upgrades here include that lighter weight carbon frame and the Rockshox Pike Ultimate Fork and Super Deluxe Ultimate Shock. The drivetrain is SRAM’s X01 Eagle 12-speed option with the GX Carbon crankset, and the brakes are the more powerful and adjustable SRAM G2 RSC version.

The top-end build is the Juliana Furtado XO1 AXS RSV MX, retailing at $10,649 USD. It gets the Ultimate-level suspension from Rockshox, a SRAM XO1 drivetrain and SRAM G2 RSC brakes. Most notable on this build is the Reserve Carbon wheels with the Industry 9 1/1 hubset.

All of the above are furnished with Maxxis Minion DHRII 27.5″ x 2.4″ front and rear tires. They are both of the EXO casing, with the MaxxTerra compound on the rear and the MaxxGrip compound up front. 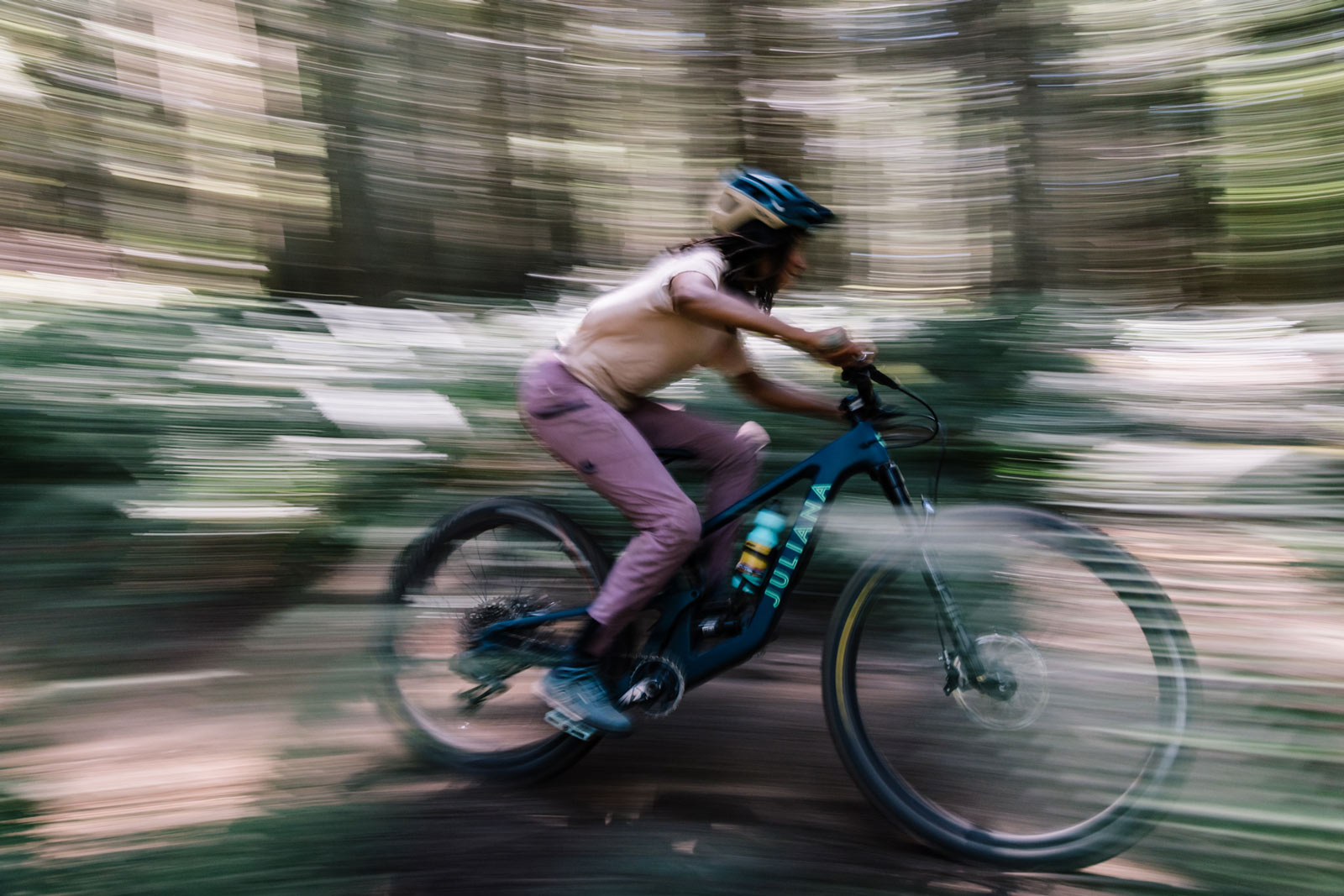 So who makes these frames? SC or Juliana??

SC own Juliana – its their female brand bike.. just like Giant bikes have the Liv brand

SC own Juliana – its there female branding bike

SC own Juliana – its their female equivalent brand bike.. just like Giant bikes have the Liv brand