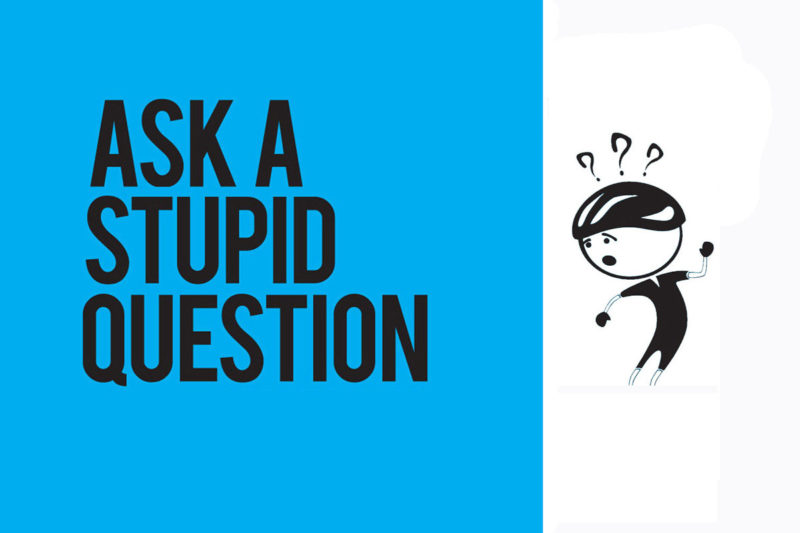 We know, there’s no such thing as a stupid question. But there are some questions you might not want to ask your local shop or riding buddies. AASQ is our weekly series where we get to the bottom of your questions – serious or otherwise. This one deals with suspension-induced pedal feedback.

This week, we took the questions in house to describe a phenomenon we were discussing amongst ourselves. Pedal kickback. What is it? Does it matter? What causes it? What can be done about it?

What is pedal kick back?

Pedal kick back is when, on a full suspension bike, you hit a bump and the crank arms are forced to rotate backward. It feels like the pedals are kicking back, hence the name. It can be uncomfortable or unsettling at best, and downright dangerous at worse.

Why does it happen? 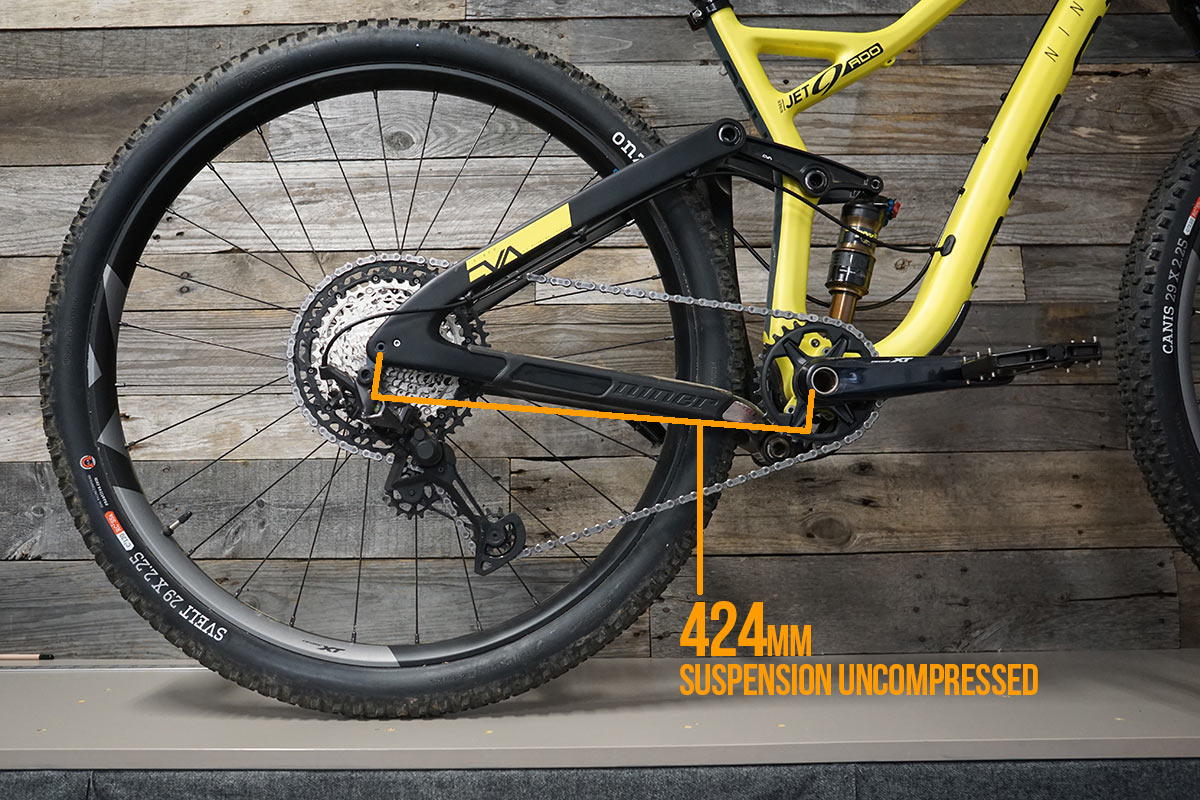 On full suspension mountain bikes, compression of the rear suspension can cause chain growth. Which simply means that, as the rear wheel moves through its travel the distance between the rear axle and bottom bracket’s center may get longer.

This distance is your chainstay length, or rear center. We’ll call it “RC” for short. These photos (above and below) show a size Medium Niner JET9 RDO’s chainstay length measured from back of crank spindle to center of axle. The effective chainstay length grew 9mm from topped out to mostly compressed. 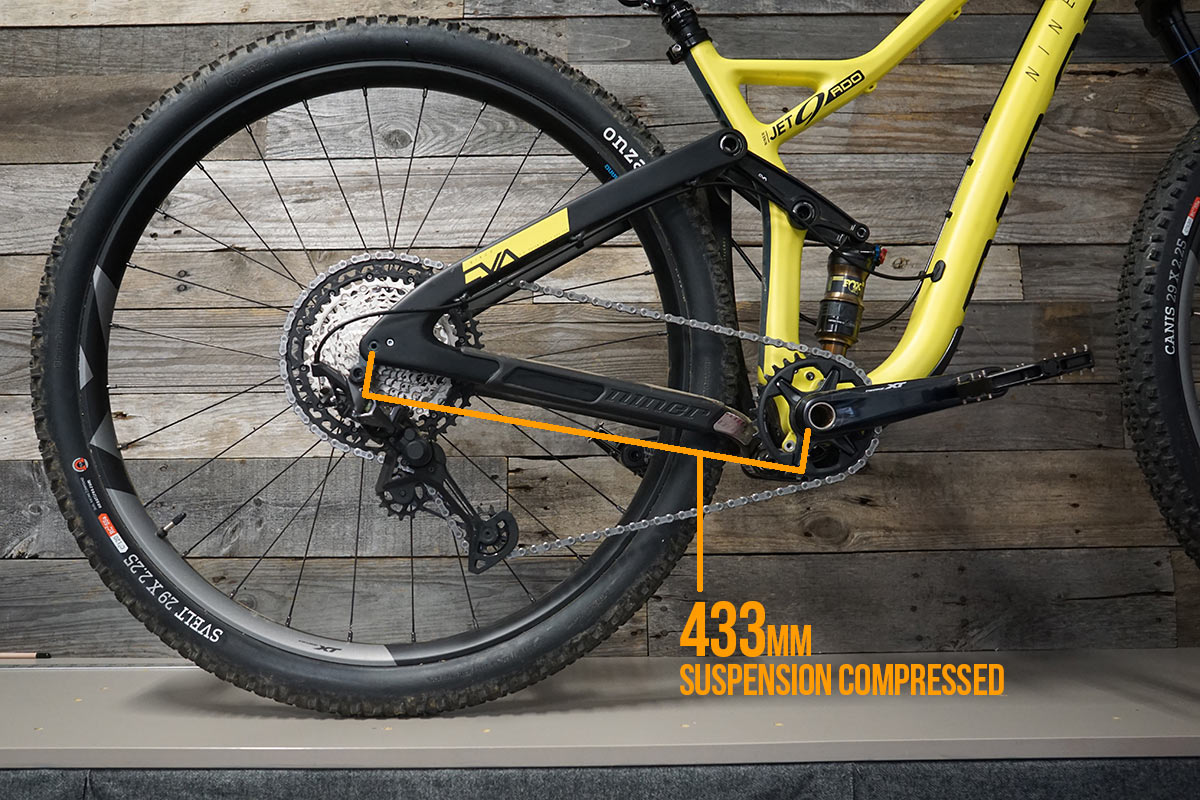 If the RC increases, the chain has to “stretch”. On the bottom of the drivetrain, you have a derailleur pulley cage that pivots to accommodate the change in length.

But on the top, you have a chain caught between the cog and the chainring. It can’t actually stretch, so one of the two has to rotate. And it’s going to be the cranks, which will rotate backward. And that’s what we call “pedal kick back”.

Here’s a quick video that shows it in action:

Why does it have to rotate backward?

The short answer? Because it’s the path of least resistance.

Sorry Quadrisaurus, but your legs are no match for metal. Once your rear wheel starts to rotate backwards, which is what’s happening when your suspension is forcing the RC to elongate, it’s going to pull the chain and try to turn the cranks backward, too.

You can easily see this in action, just roll your bike backward and try to prevent the cranks from turning. Can’t stop it, right?

Don’t think it’s happening? Let a little air out of your rear shock so you can quickly compress the rear end. Or drop your bike so it bounces hard. Did your cranks spin backward? That’s pedal kickback.

Honestly, we don’t always notice it either. Sometimes it’s so mild as to be unnoticeable. And sometimes we’re probably just mistaking it for bumps on the ground.

There’s a lot going on when we’re riding hard and fast enough for it to be an issue. In most “normal” riding, especially on modern, well-designed full suspension bikes, pedal kickback is probably minimal enough to go unnoticed.

Sort of, but maybe not the way you’re thinking. For starters, it helps to look at how the pro downhillers have fared when they’ve (accidentally or intentionally) ended up racing without a chain.

If you haven’t yet seen Neko Mullaly’s chainless run (above) at Hafjell World Champs in 2014 then it’s high time you did. He snapped his chain straight out the start gate. It’s nothing short of hilarious to listen to Rob Warner and Nigel Page talk about how “gutted” they were for him, only to find that he was up at the second time split and went on to place 4th. 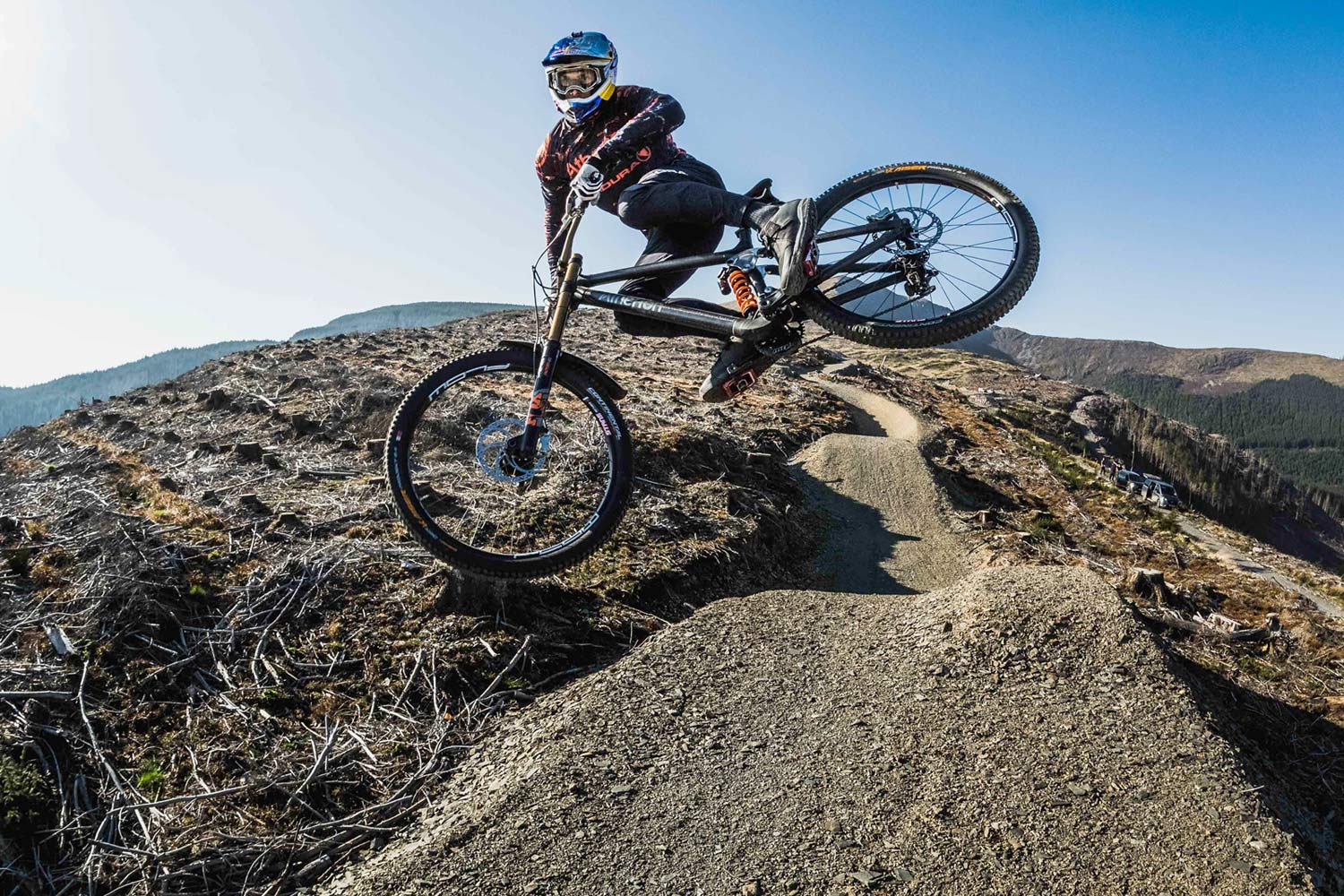 Gee Atherton (shown above) has dabbled with neutral gear mechanisms – a dead space mid cassette that he drops into before rough sections to eliminate pedal kickback.

Better yet, Aaron Gwin actually won at Leogang in 2015 on a chainless run. How is this even possible? Well, insane skill has a lot to do with it, but reducing pedal kick back certainly won’t hurt.

It’s important to note that pedal kickback only actually occurs when the freehub is engaged. Which doesn’t seem like something that should happen when you’re coasting downhill. In reality, that’s not always the case.

If the suspension compresses at sufficient speed to cause the freehub to engage – this is most likely to happen if you roll off a drop at low speed to flat – then you’ll likely feel a great big tug backwards on the pedals. It’s unsettling and could be enough for someone who rides in flats to lose their footing momentarily.

What causes pedal kick back?

Thus far, we’ve explained why your bike will kick the pedals upward, but what are the actual situations that lead to it happening? Are there certain conditions or factors that make it worse?

Oh yeah, there are. The degree of pedal kickback is influenced by five key factors:

Let’s tackle those one by one:

Every bike’s different. We used a Niner JET9 RDO to illustrate some of this story, but virtually every full suspension bike is going to have some change in RC length as the suspension compresses. The only exception is a single pivot bike where the main pivot is concentric with the bottom bracket spindle. So, some bikes will have more or less, but it’s not a measurement most (any?) brands include on their geometry chart.

Basically, the faster your suspension compresses, the faster it’s going to yank back on the chain. If your bike has a lot of chain growth and you hit something hard enough or land a monster jump, it could kick the pedals back fast enough to fling your foot off. 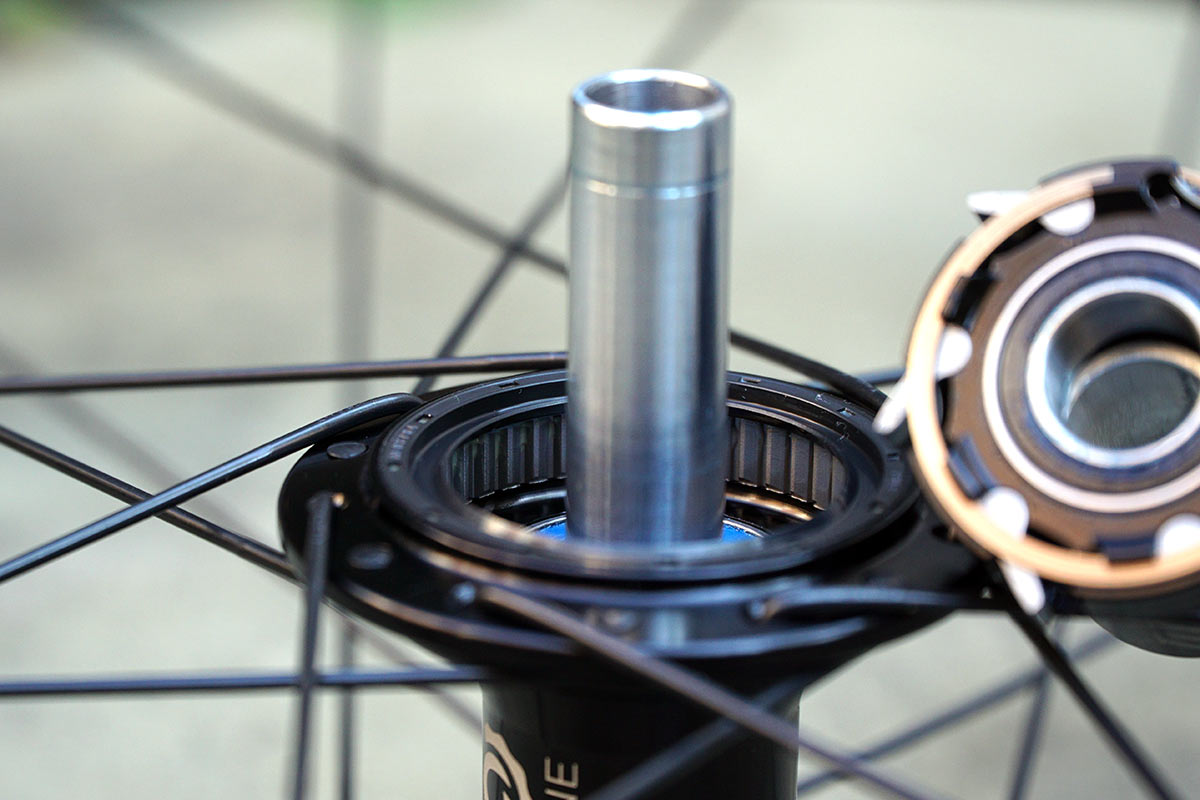 Here’s one instance where a very quick freehub engagement could be detrimental. If you only have 3º of rotation before engagement, that means you’ll start to get chain stretch in 3º.

But if you have a (generally less expensive) hub with more, say 10º of rotation, your bike’s RC would be able to elongate more before it engages the cassette and starts pulling the chain backward.

Which gear you’re in 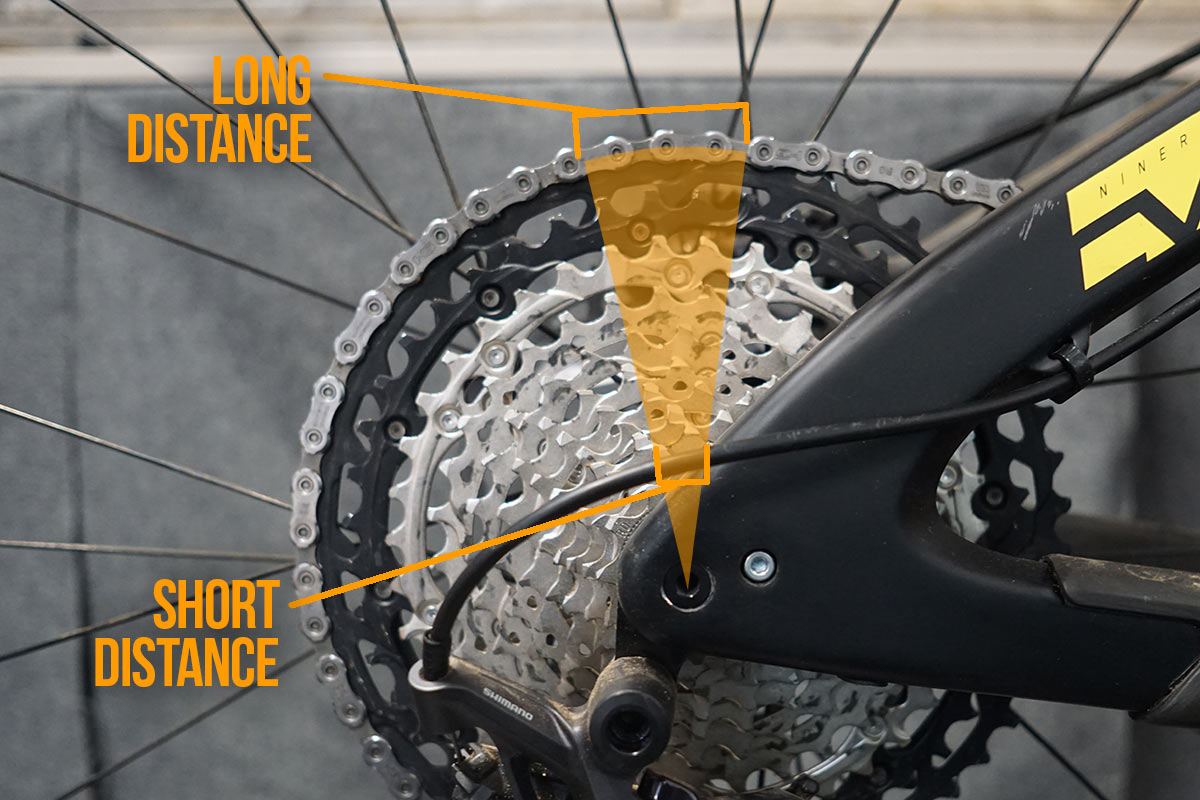 Pedal kick back will be greater in the biggest sprocket as compared to the smallest sprocket. Why? Because the teeth on the largest cogs are further away from the point of rotation, so for each degree of rotation, they’re moving more distance.

So, larger cogs pulls more chain back from the chain ring, thus causing more rearward rotation of the crank set. 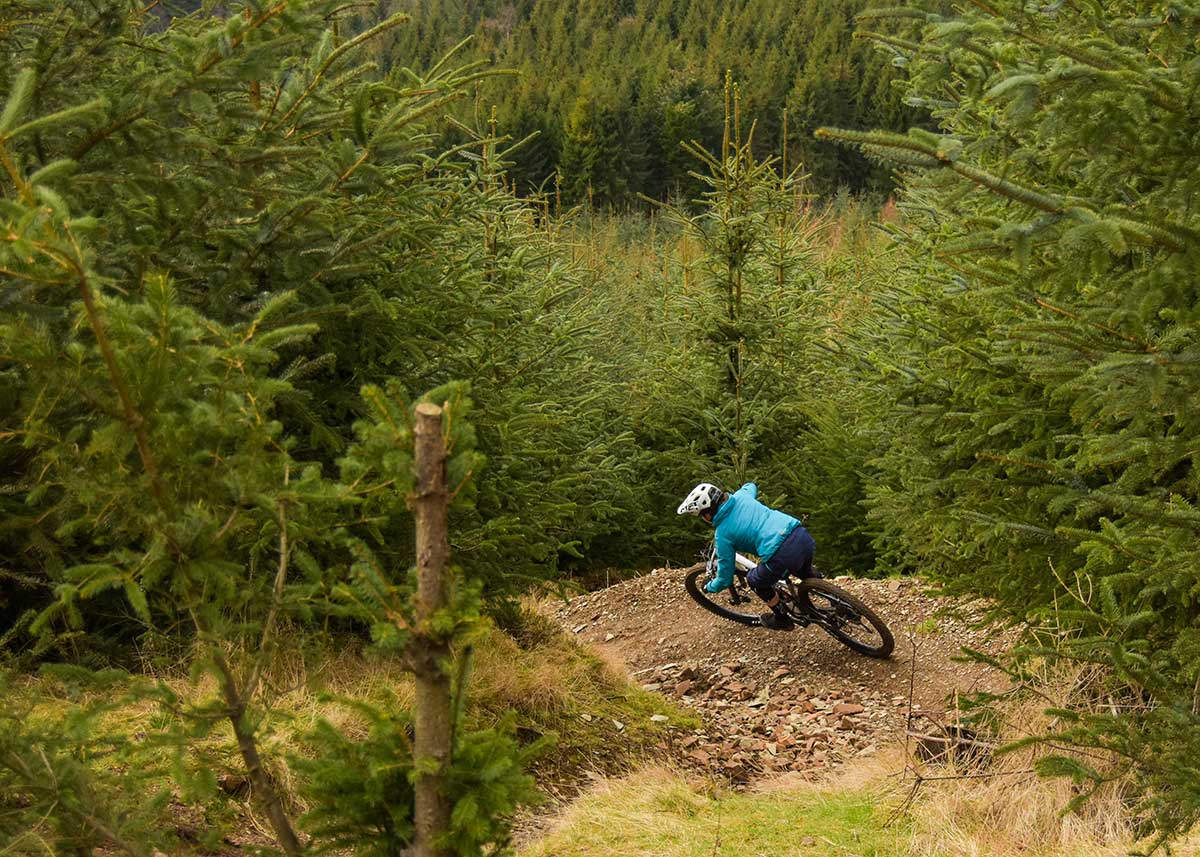 If the rear wheel locks up under braking, then you’re in for some pedal kickback for sure.

Imagine you’re riding a fast bike park trail and you’re coming into a berm far too hot and need to scrub speed. You’re not the first to have done this, so there’s an array of braking bumps right before the corner.

You pull hard on the rear brake and the rear wheel slows rapidly, maybe even locks up and you skid a little as you hit the braking bumps. At this point, your suspension is likely working overtime, and the lack of forward wheel rotation (because you’ve locked it up) exacerbates the chain growth. And, thus, the pedal kickback. 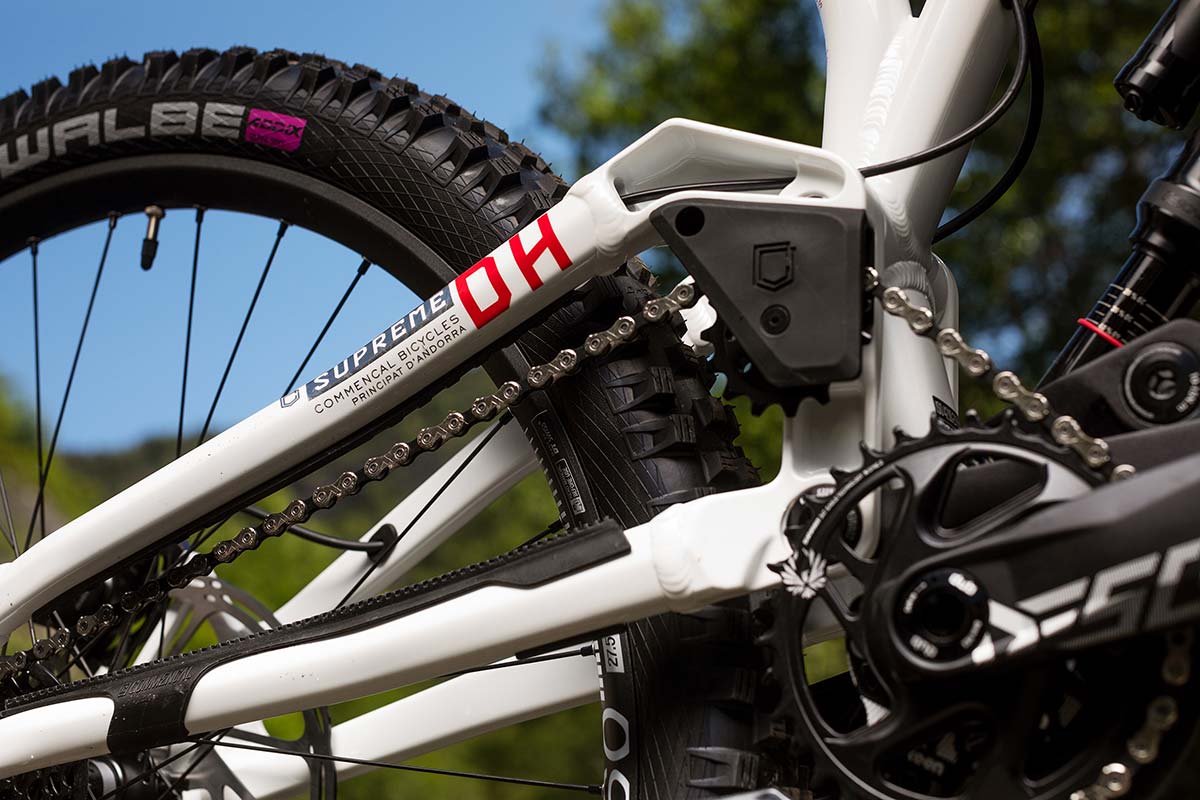 The new Commencal Supreme DH bike has a high-pivot design and uses a chain idler near the main pivot to eliminate chain growth.

What about high pivot bikes?

Those are an animal all to themselves, and we had several high-pivot bike brands explain their designs in great detail in a prior AASQ. Check that out if you own one of those.

Roadie and former BMXer here, learned a lot about bouncy bikes there 🙂 When I used to ride flatland BMX we used a free coaster hub which allows you to pedal forwards like normal but coast backwards without engaging the cranks. This concept should eliminate kickback, but I doubt there’s a suitable hub on the market today. Maybe the next big thing?

Great article, the demonstration and example make this very easy to understand. . I have been riding all kinds of bikes and terrain for 30+ years and don’t recall ever feeling this. Doesn’t mean its not happening though. It makes me wonder how many time I crashed and blamed it on terrain. I’m also reminded of the ability/discipline of pro riders who can detect this while bombing down a mountain. Talk about being mindful, the Dali Lama would be impressed!! Thanks for the article, more please!

Gashman, Thanks! We publish an AASQ most Fridays, and just search “aasq” on the site to see them all…there’s some great reading in there! Let us know (with the contact form on the top menu bar) if there’s a topic you want us to explore for a future installment.

Early Rocky Mountain VPP designs had tons of feedback. You’d really feel it from time to time rolling through rock gardens. It was really distracting when it happened.

I always find it funny that people are worried about it’s effect when descending but you are usually moving at a speed that the engagement in the free hub negates it’s effect.

Braking brings in another group of forces so isolating pedal kickback from braking jack would be very difficult to interpret as a rider.

The place I have actually noticed it is in slower speed climbing on roots/steps in the trail as a slight tug on the cranks and it’s more of an annoyance than really detriment.

Your paragraph about what gear you’re in is incorrect. It doesn’t affect kickback.

Thinking about it further, it does affect it slightly but in the opposite way you said. Chain growth is the same, but freehub engagement will happen faster in small/high gears.