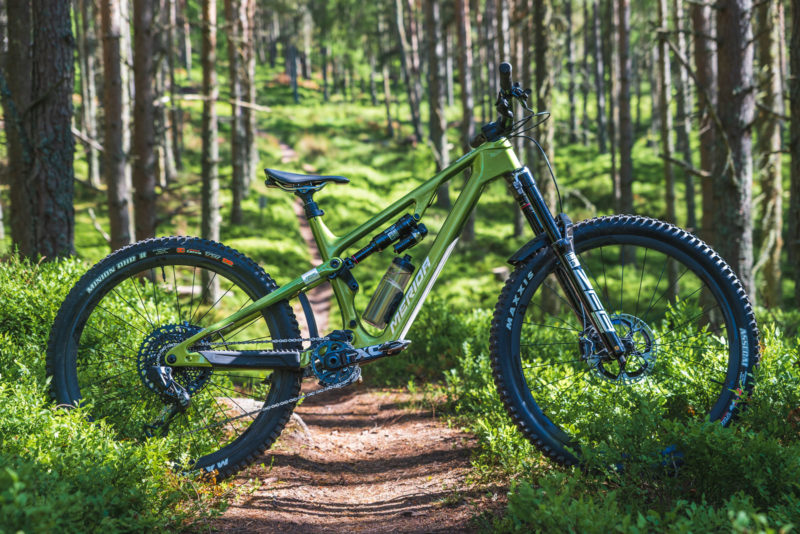 Merida has announced the overhaul of their ONE-SIXTY and ONE-FORTY full suspension mountain bikes for 2023, and they look absolutely fantastic. Seriously, this is no mere update. Merida has done away with the Horst-Link suspension platform utilized by previous generations, replacing it with a more sophisticated version of the P-FLEX system seen on their lightweight NINETY-SIX cross-country bike. It’s now a linkage-driven single-pivot layout, but leans on flexible seat stays to help drive a 230mm x 65mm shock on the ONE-SIXTY, and a 230mm 57.5mm shock on the ONE-FORTY.

Indeed, the two bikes run the same front and rear triangle, and the same links; switching between the two requires only a new shock and fork. The ONE-FORTY is a complete 29er and, with its shorter stroke length shock, delivers 143mm of rear wheel travel paired with a 150mm travel fork. 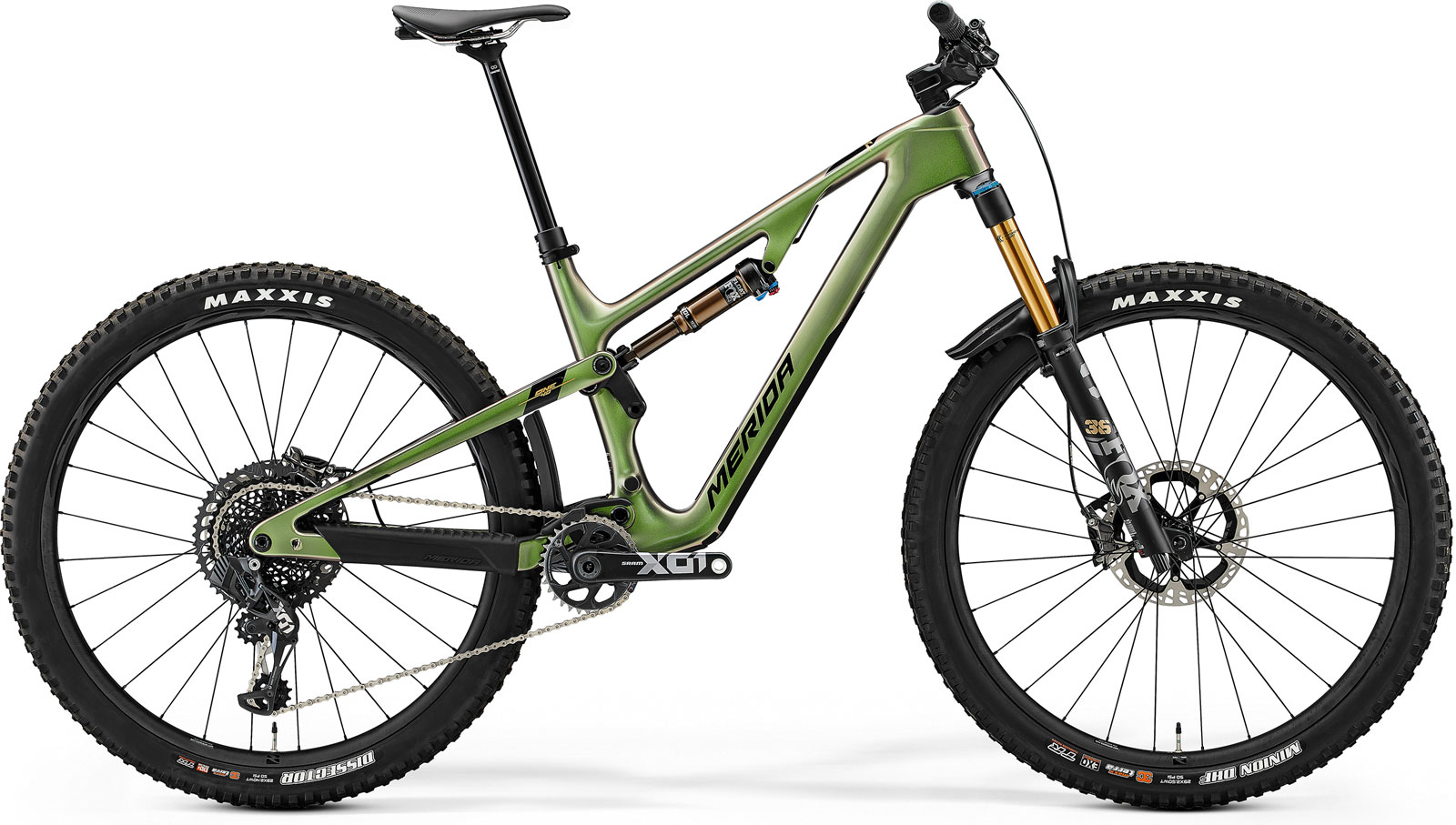 The most you can pay for the 2023 Merida ONE-FORTY is £8,000; that gets you the Carbon 10K model with Fox Factory suspension 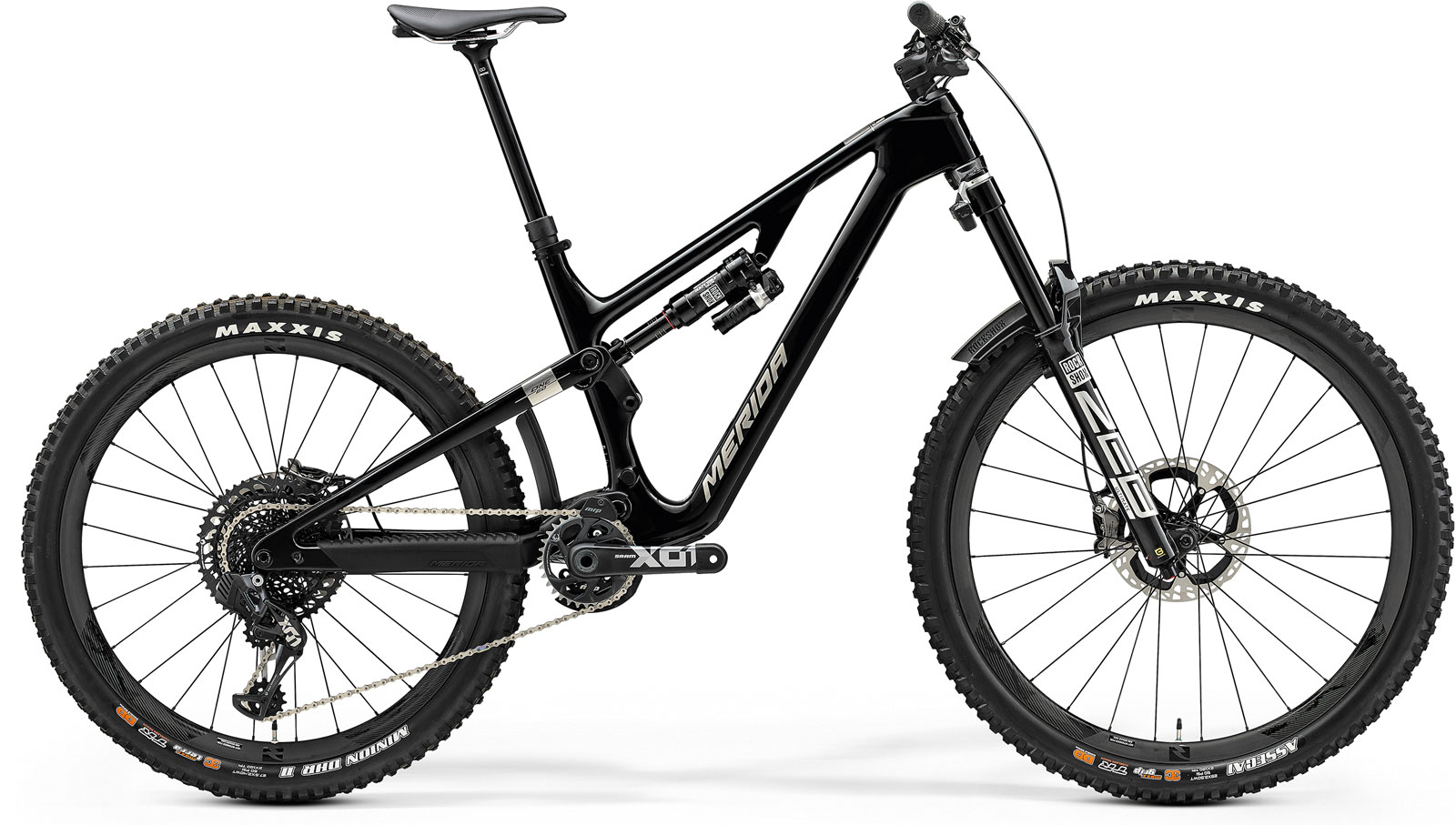 The most you can pay for the 2023 Merida ONE-SIXTY is £9,000; that gets you the 10K model with RockShox Flight Attendant suspension

For sure, these new bikes are very adaptable. They also get integrated tool storage, a 30mm-230mm travel infinitely adjustable dropper post across all frame sizes (XS-XL), and size-specific suspension. Feature-packed, or what? And, they are available in both Carbon and Aluminum.

I don’t know about you, but the new Merida ONE-SIXTY and ONE-FORTY are ticking my boxes at a rate of knots. 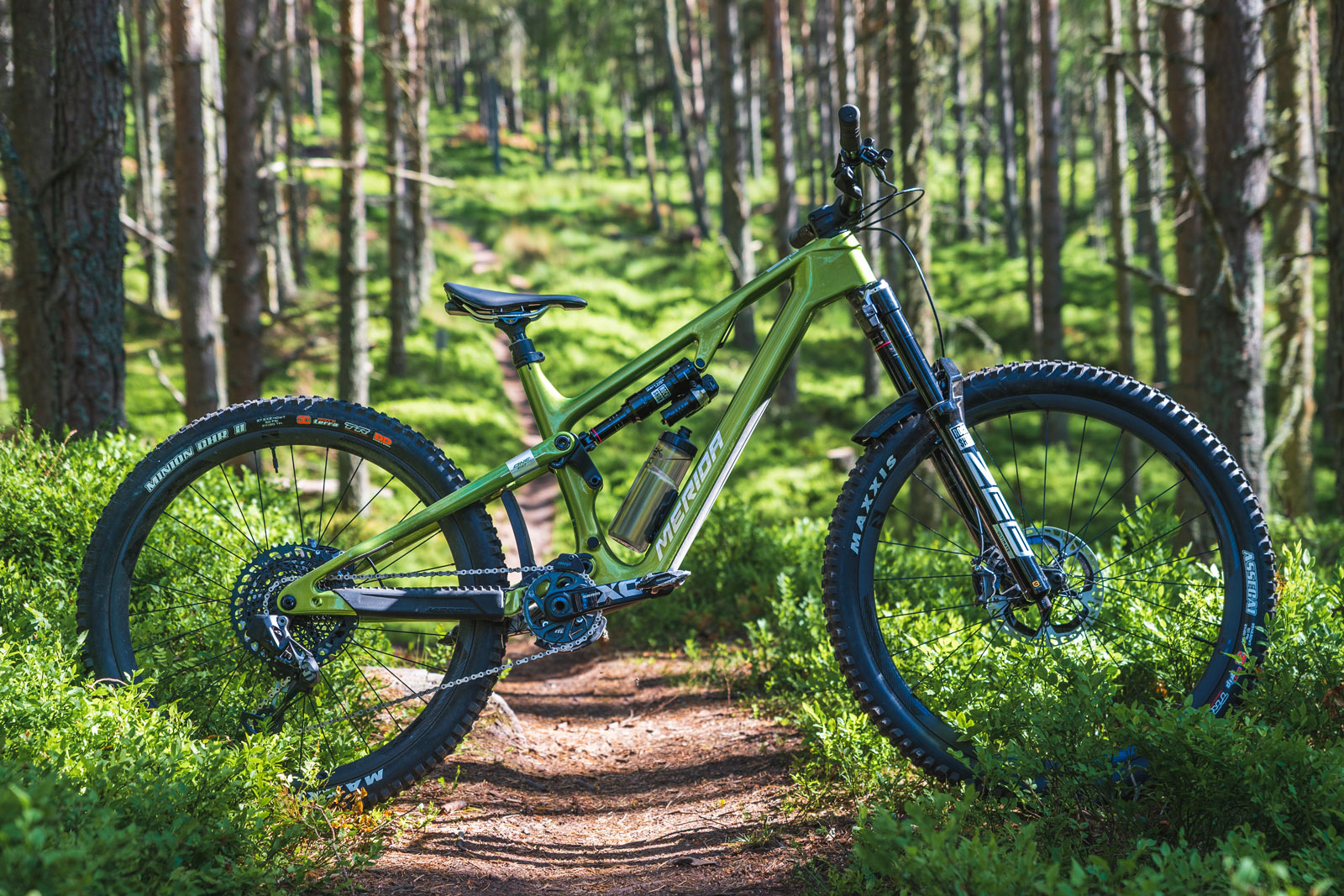 The new Merida ONE-SIXTY is available in sizes XS-XL; that’s Extra Short to Extra Long, a subtle change in nomenclature that is a nod to the Merida “Agilometer” size guide, which suggests bike size based on rider height and their preference for stability versus maneuverability. In essence, Merida are keeping seat tubes short (425mm in Mid) to allow riders to pick the size based on their riding style as opposed to just their height. The generous standover clearance combined with the 30mm-230mm infinitely adjustable dropper post is right on the money. 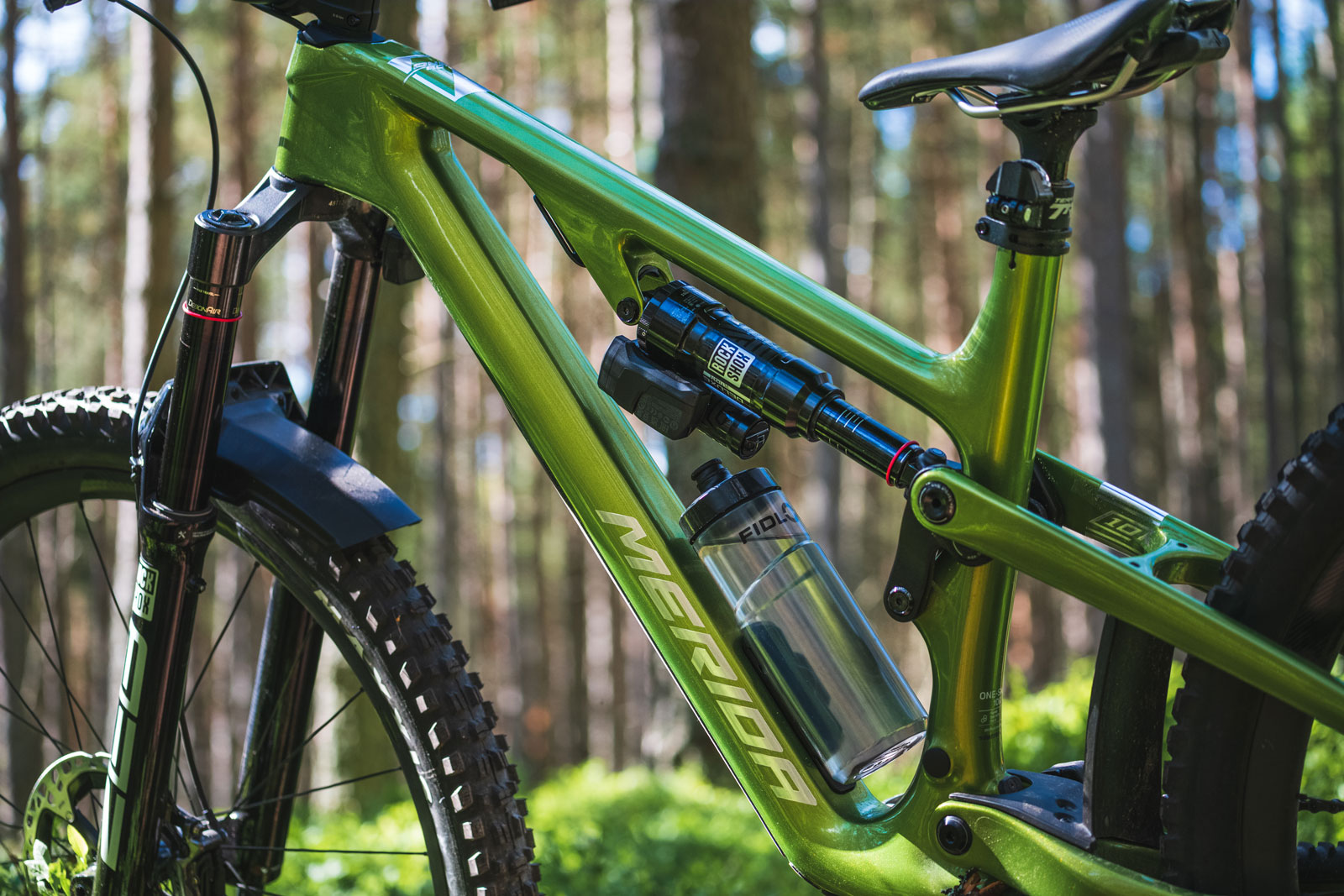 Drop length of the Merida Team TR Dropper Post can be easily adjusted between 30mm and 230mm; simply compress the dropper to half mast, unlock via the NDS Allen bolt, adjust the post to its new top-out position, then lock the Allen bolt back

The ONE-SIXTY can be set up as a full 29er, or in a mixed-wheel configuration. The XS-M bikes are shipped with the 29″/27.5″ set up, while the larger sizes come with a 29″ wheelset. You’re not stuck with that, though. A flip-chip at the rocker link-seat stay interface allows for the geometry correction required with a rear wheel size change. 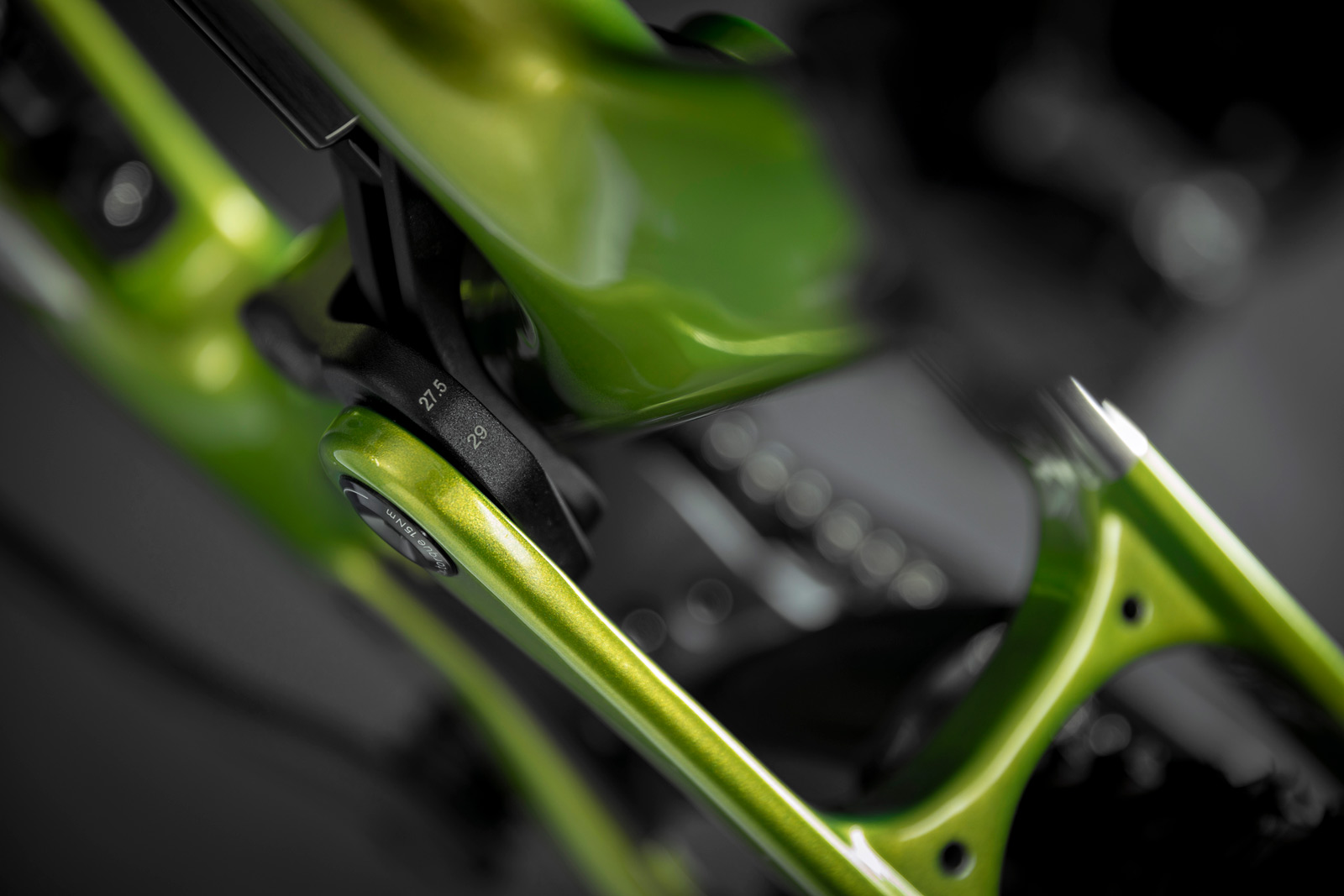 The flip-chip is not to be used to adjust the bike’s geometry outwith the context of a wheel size change; for example, switching the flip-chip to the 27.5″ mode with a 29″ rear wheel runs the risk of the tyre colliding with the back of the seat tube at full compression.

Merida pitch the ONE-SIXTY as their no-compromise enduro bike, made to “shrug off the demands of ever harder tracks”. With that in mind, their 5 year frame warranty extends to Category 5 use; that covers racing, as well as anything you might find in a Bike Park, too. Build options reflect that intention, featuring piggy-back shocks, 38mm stanchion long-travel forks and double-down casing tires front and rear.

And, its geometry is befitting of those intentions, too. It has a 64° head angle, and reach figures span a healthy range of 415mm to 525mm, coming in at 470mm on the Mid. The bottom bracket drop is 27.5mm on in 29er mode and 7mm in mullet mode. Merida have shown due care and attention to how the 160 climbs, too; seat tube angles are trending steeper for good reason and we’re pleased to see Merida are into it. The SA on the ONE-SIXTY comes in at a fairly upright 79°. 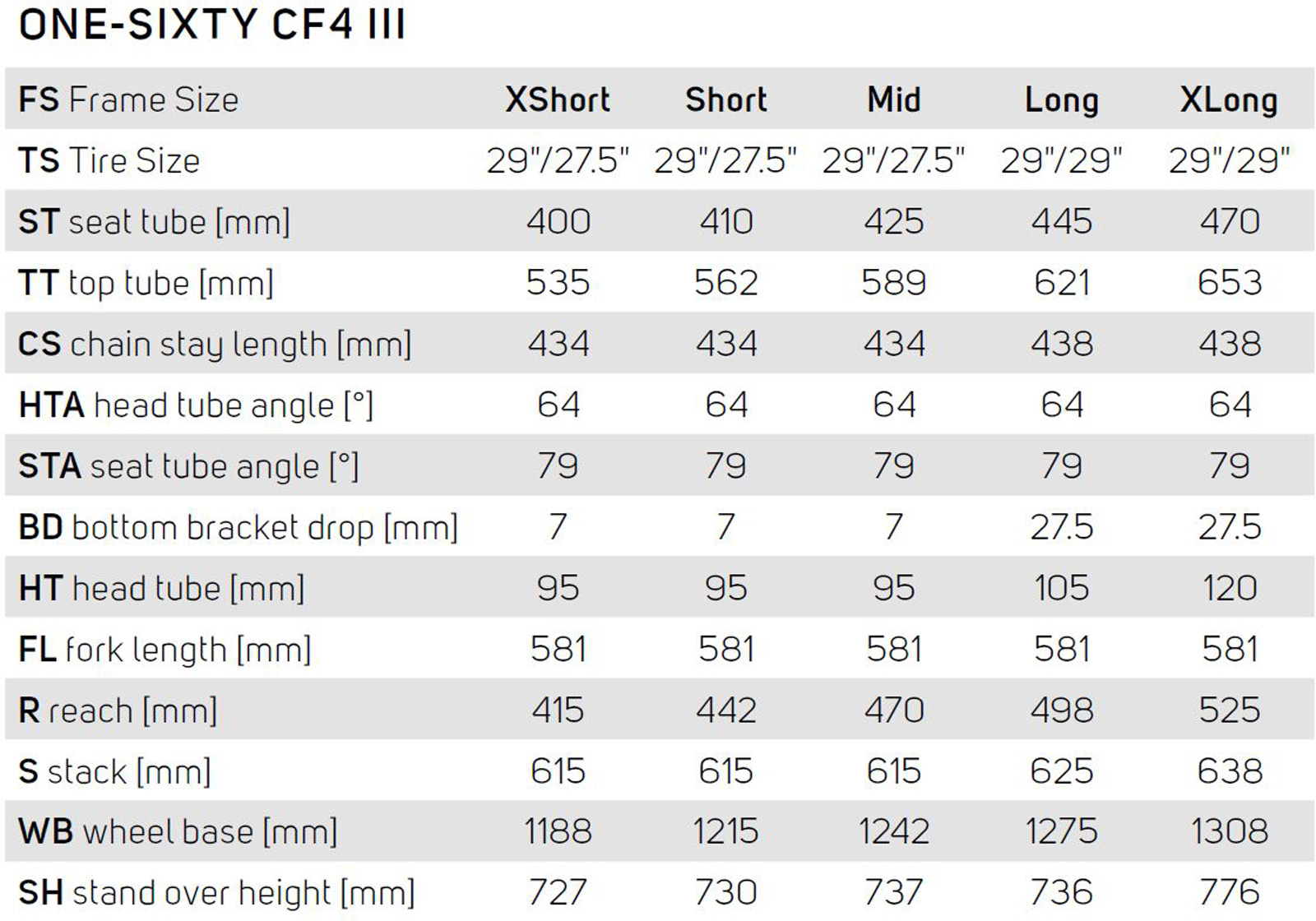 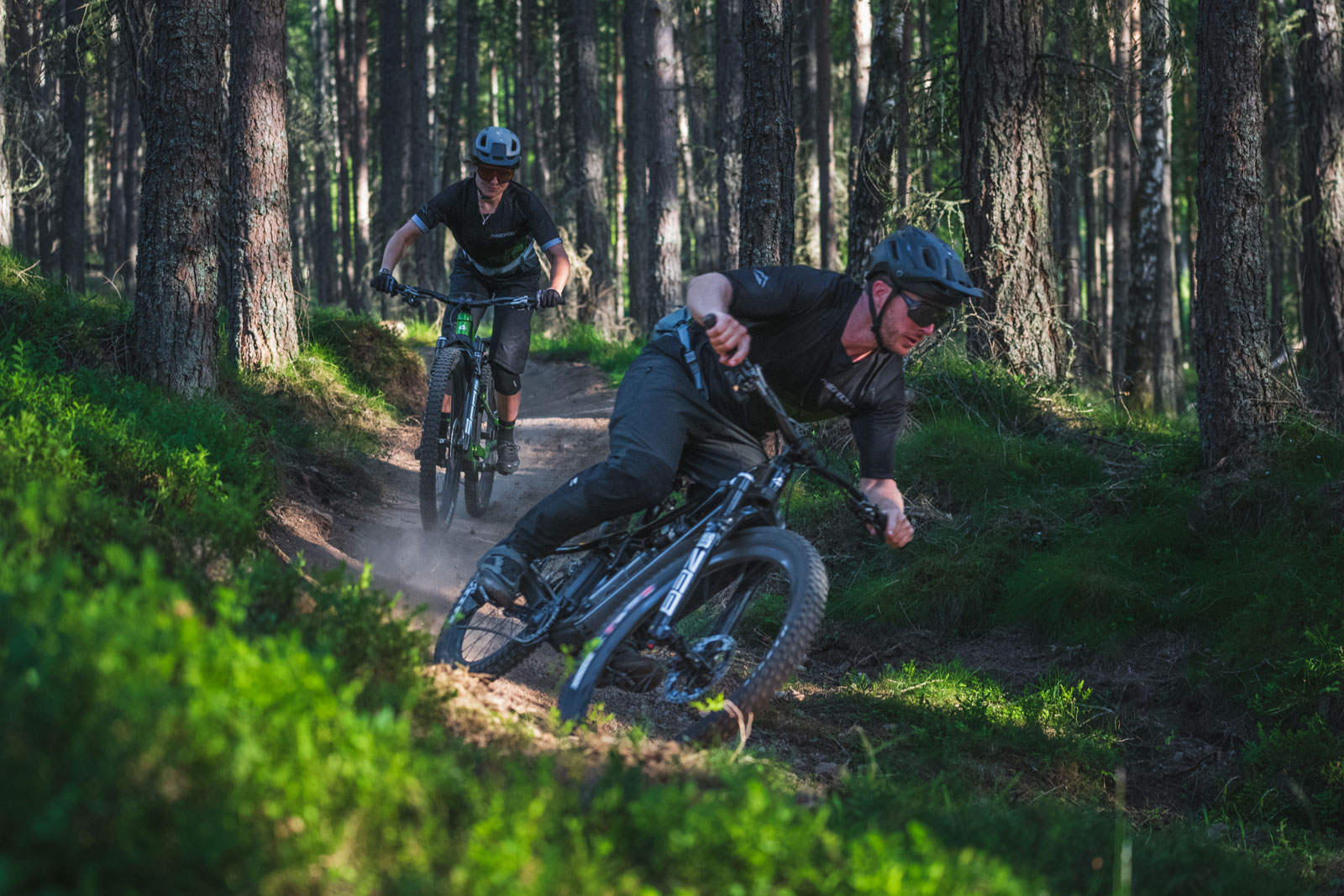 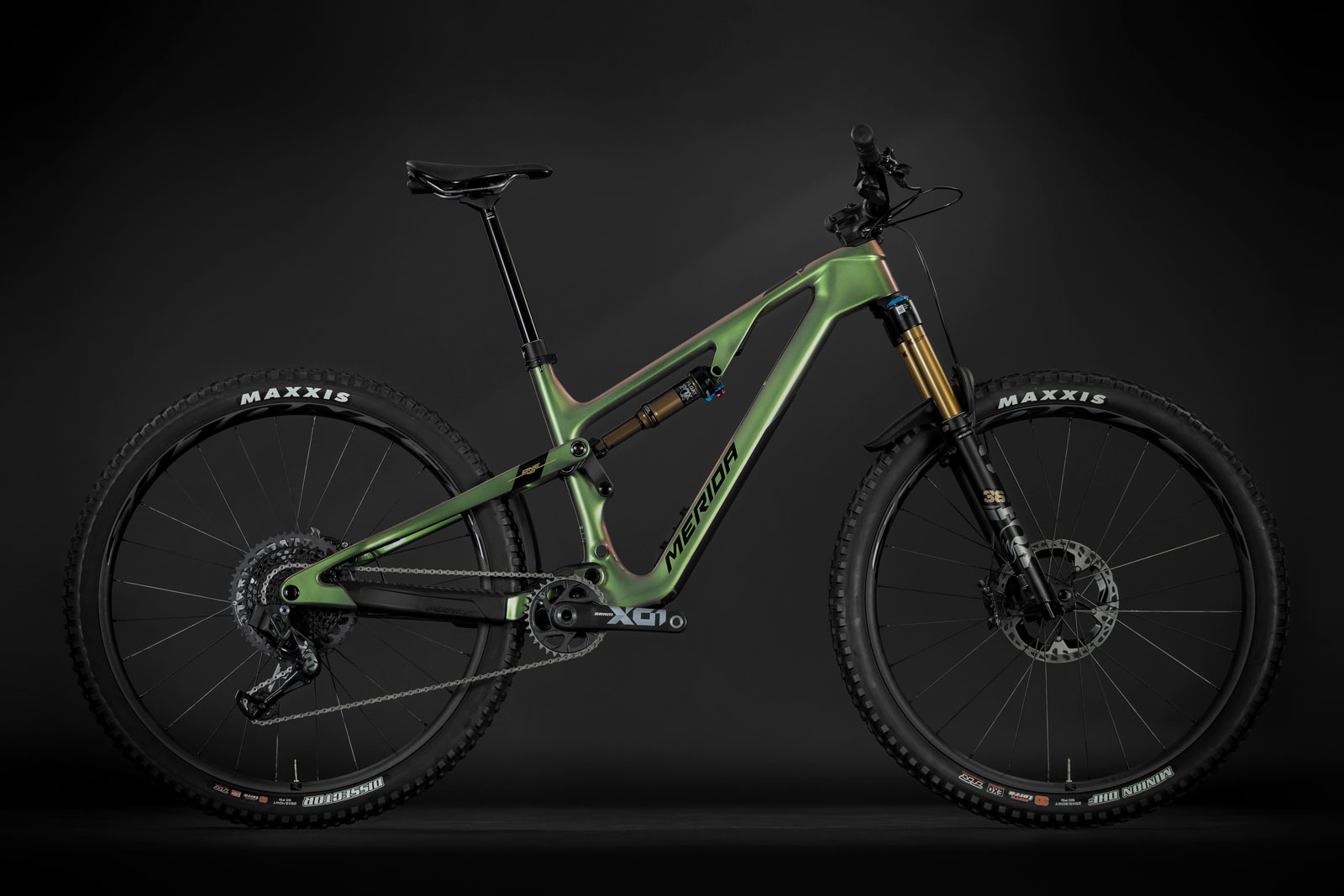 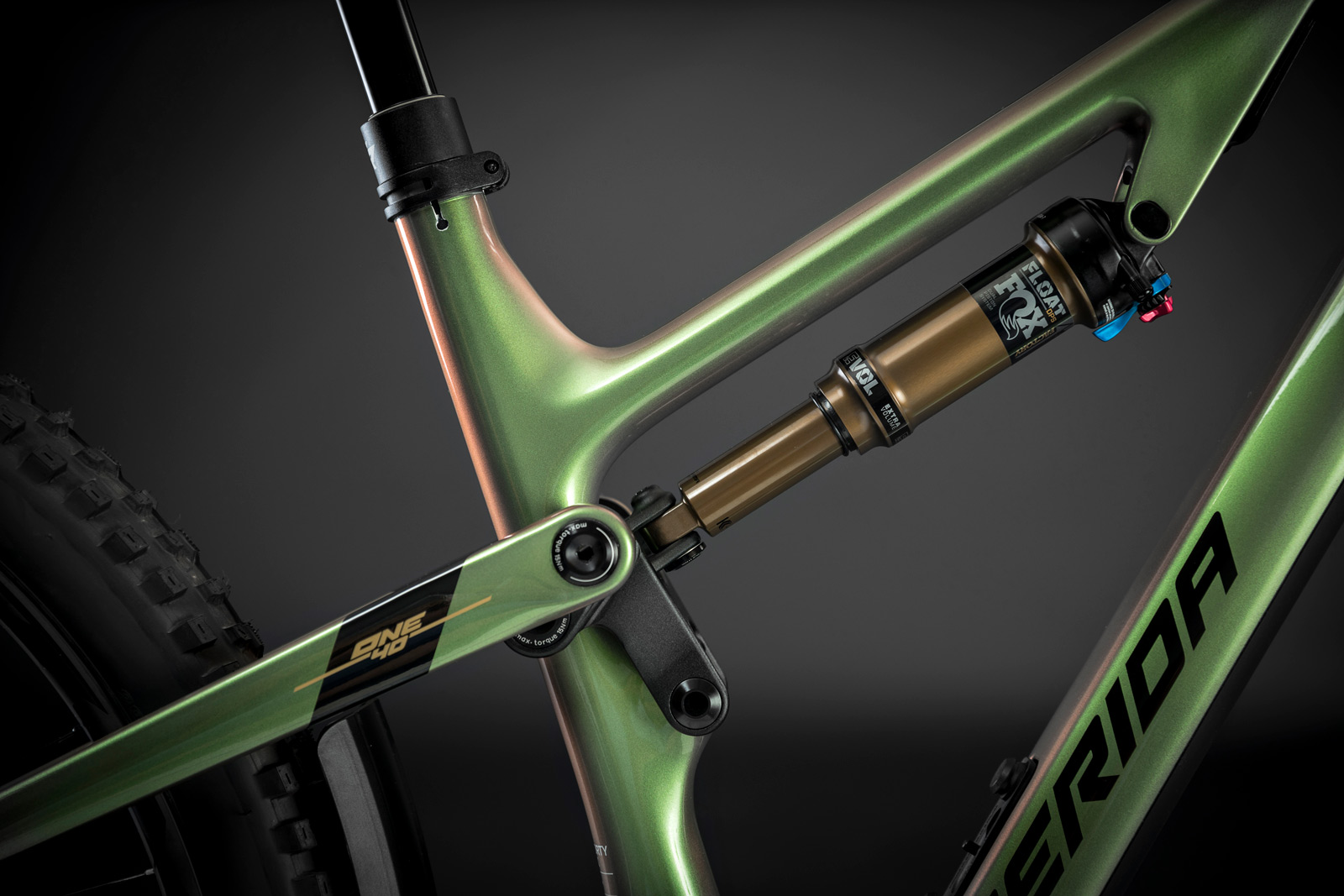 It runs the very same frame as the ONE-SIXTY; it’s only the shock stroke, fork length, and spec list that differ. With the shorter 150mm fork, the front end is lower, making the bike is a little steeper both at the head tube (65°) and at the seat tube (80°). That stretches the reach out, too, coming in at 480mm on the Mid.

All of the 140 frames ship with a complete 29″ wheelset but of course, the mullet option remains. Actually, switching out the 29″ rear wheel for a 27.5″ wheel does increase travel from 143mm to 151mm. 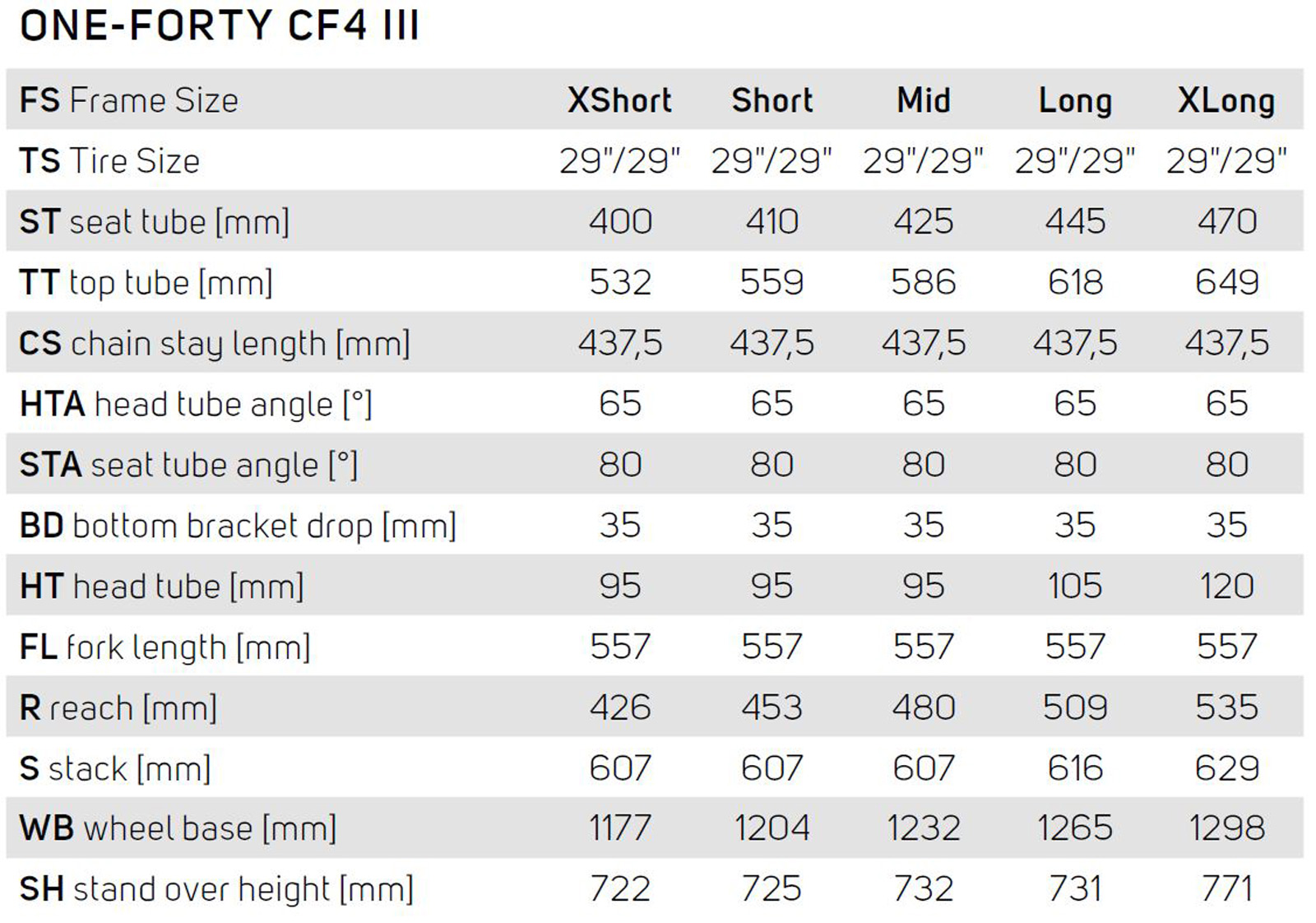 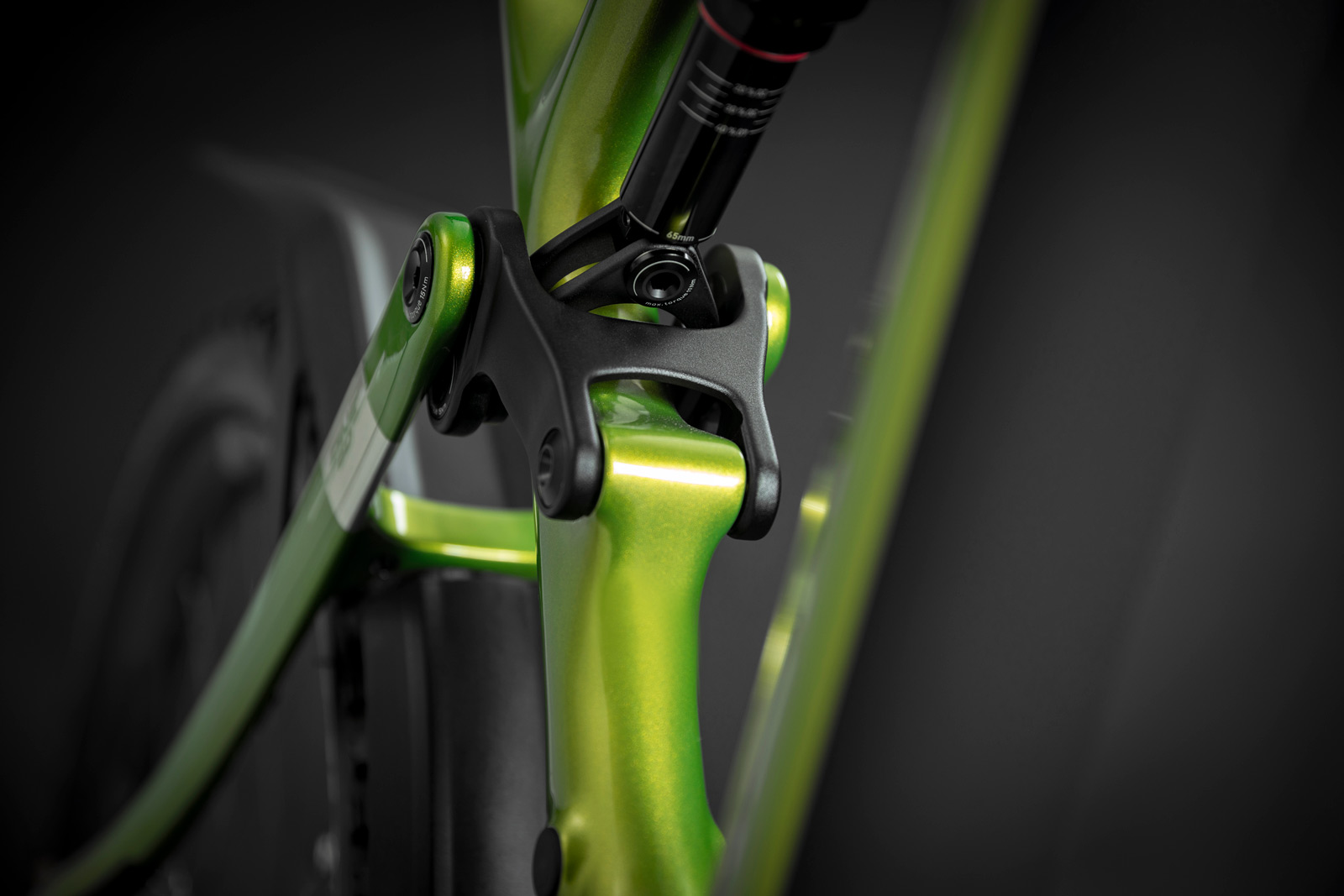 Big news for the new Merida 160 and 140 bikes is the switch to a linkage-driven single-pivot suspension design that makes use of flexible seatstays. This flex system is present on both the carbon and aluminum frames. Relative to the chainstays, the seatstays bend through a total of 2°.

Noteworthy here is that the suspension’s behavior differs across the frame sizes. This is Merida’s new FAST (Flexstay Adjustable Size Tuned) Kinematic. Basically, they have engineered more progression into the larger frame sizes as compared to the smaller frame sizes, based on the assumption that people who want to ride longer bikes are a) taller and heavier, and b) enjoy more straight-line ploughing. In either case, those riders tend to need the additional support provided by a more progressive suspension platform. 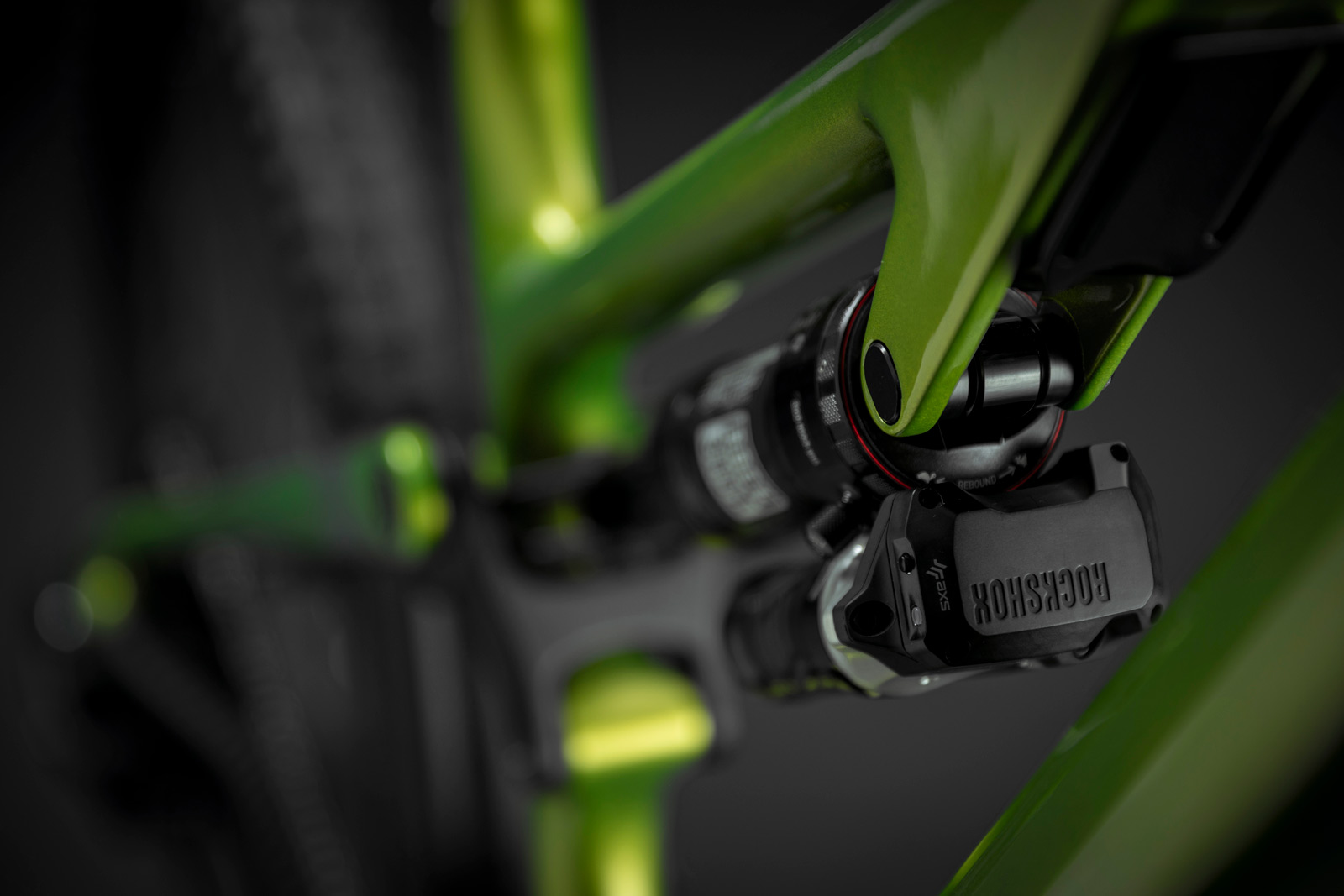 As you go up through the frame sizes, the top tube shock mounting tab gets longer, therefore positioning the front of the shock lower; this is what delivers the added progression on the larger frame sizes

So how much more progressive are the larger frames? Quite a bit, it seems.

Left; 2023 Merida ONE-SIXTY leverage curve for sizes XS-XL, Right; A comparison of the leverage curves for the Mid frame in 29er and mullet modes.

As you can see in the graphs above, the progression offered by the linkage on the XS is quite different to that on the Mid frame size; 6% versus 9.3%. Those numbers pertain to the progression between the sag point and 95% of the travel. For all frame sizes, the leverage curve becomes regressive toward the end to allow riders to squeeze every last millimeter of travel out of air shocks.

Indeed, all of the Merida ONE-SIXTY and ONE-FORTY bikes are sold with air shocks, though the brand do say there is sufficient progression to allow for coil shocks; the Rockshox Super Deluxe Coil, as well as coil shocks from DVO, are all confirmed to be compatible with the bikes. 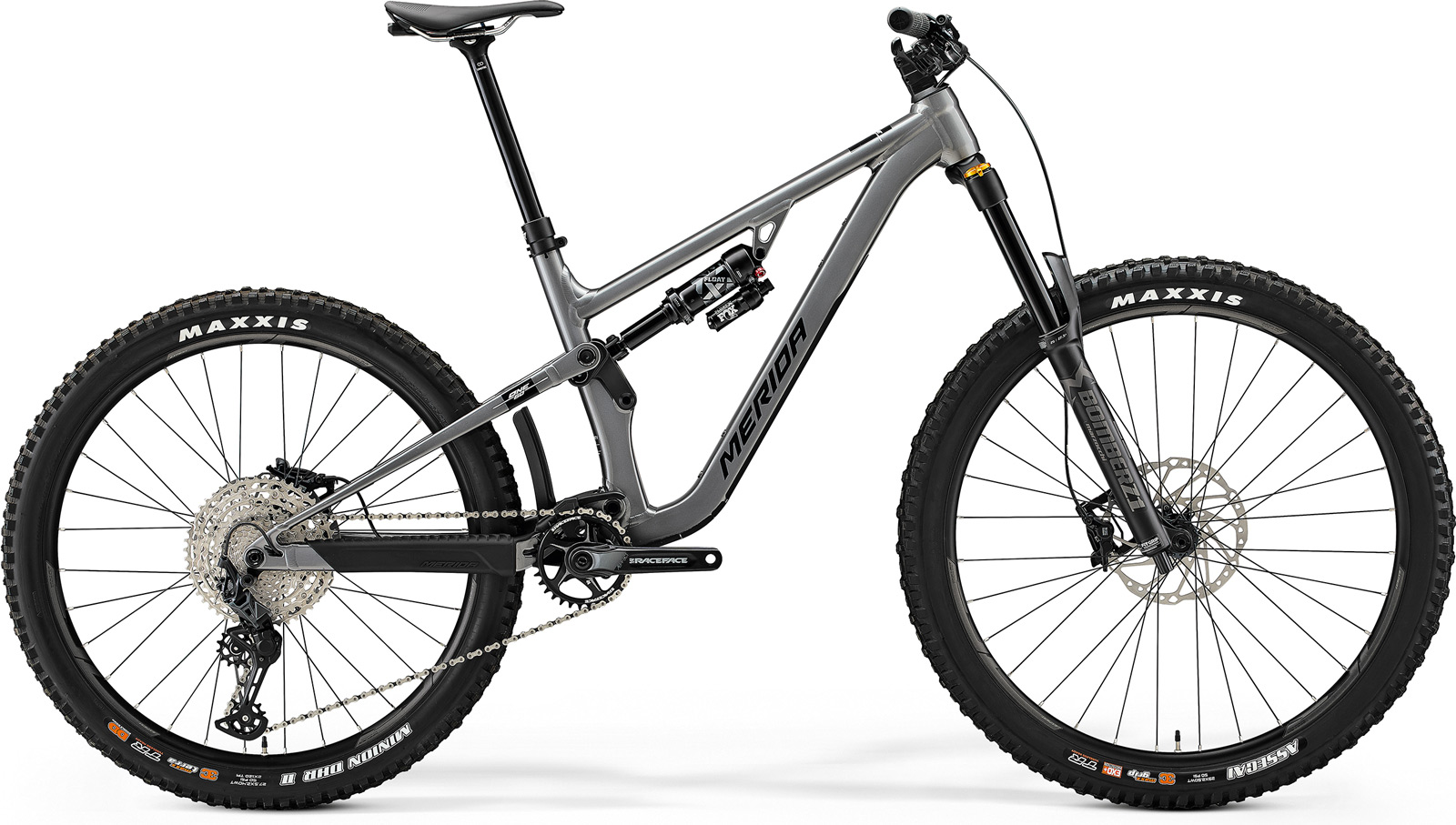 The new bikes have numerous handy frame features and add-ons, most of which are shared between the carbon and aluminum frames. 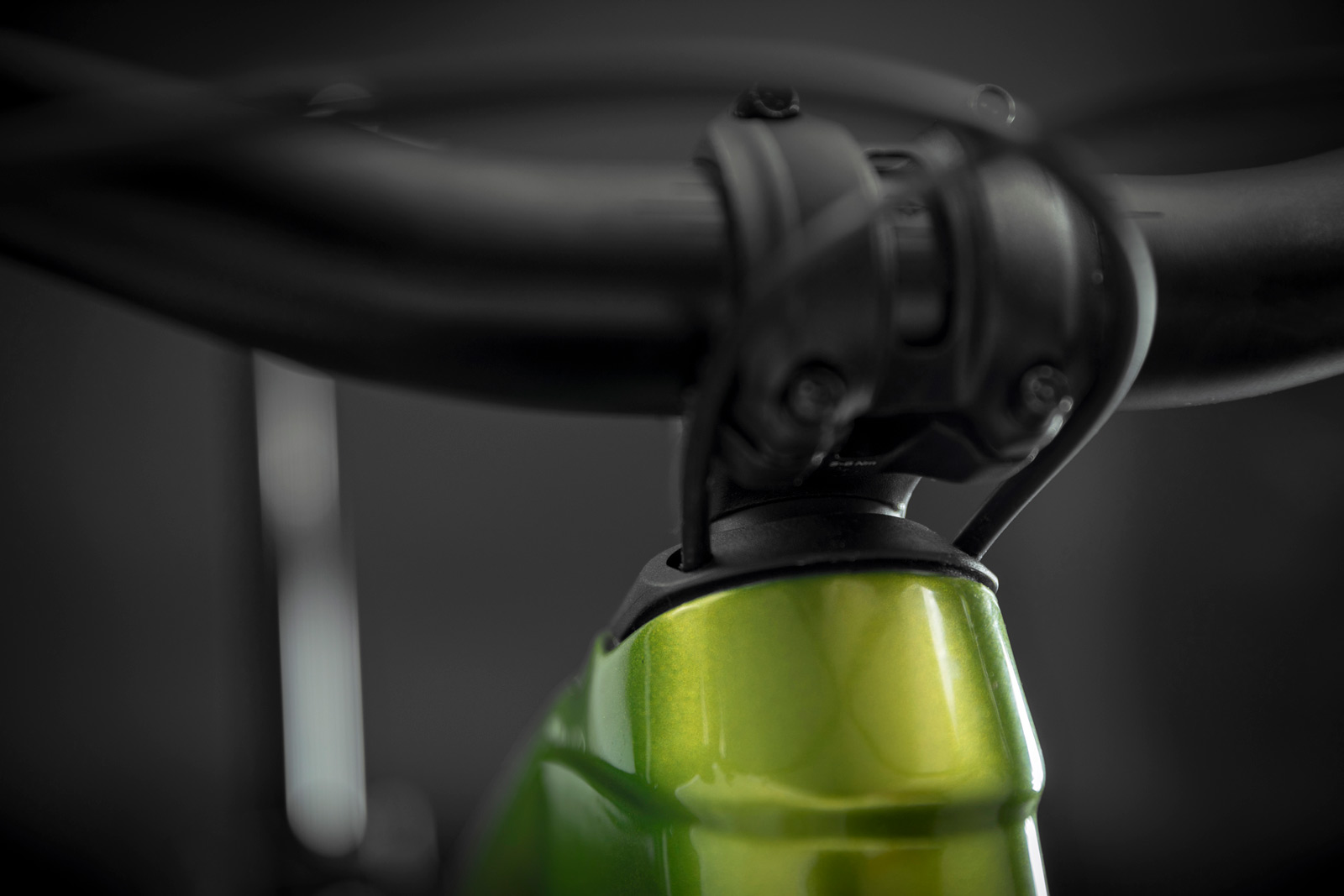 All of the Carbon models get an Acros headset that routes cables internally though the upper headset bearing; nice for race plate visibility, but not everyone’s cup of tea 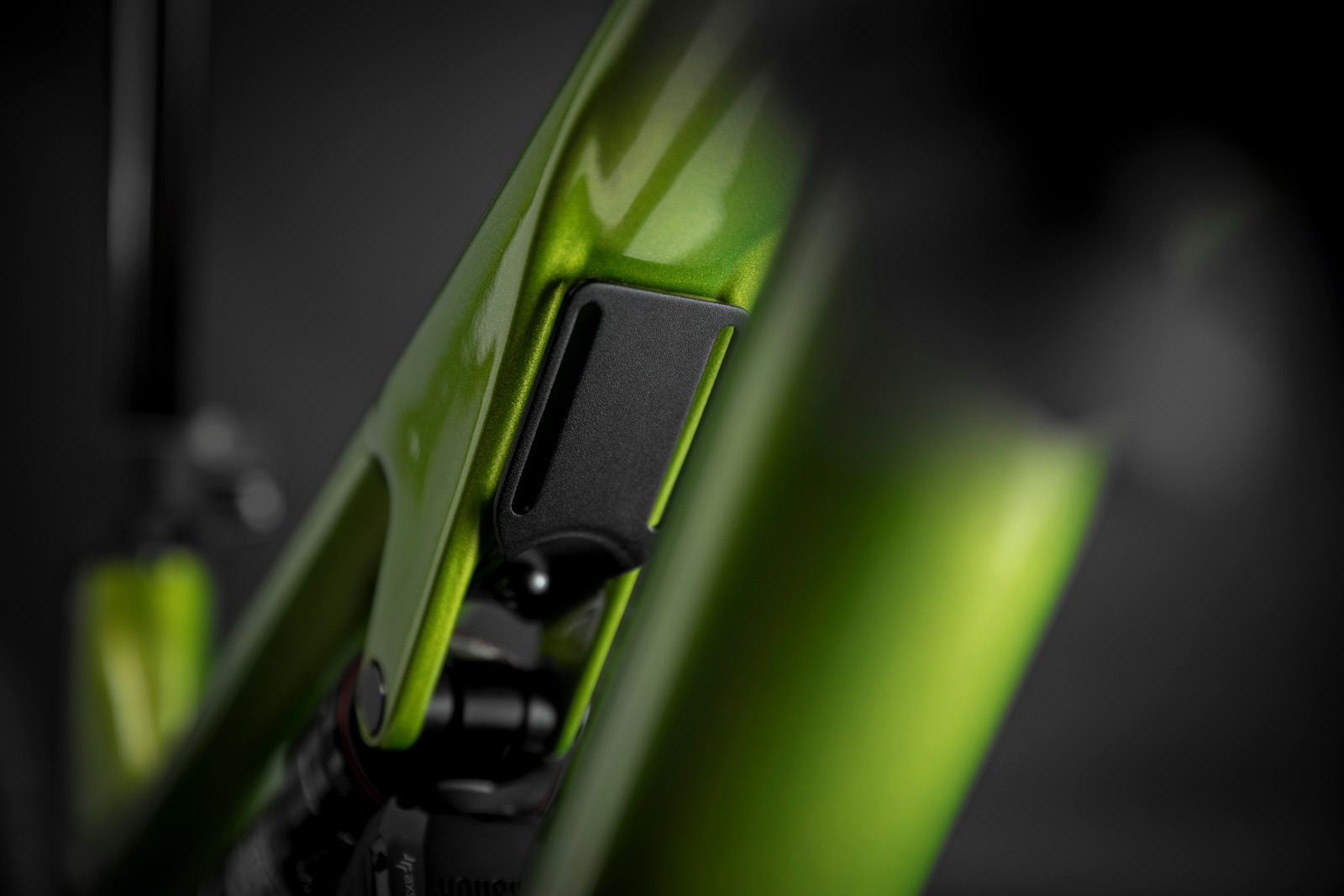 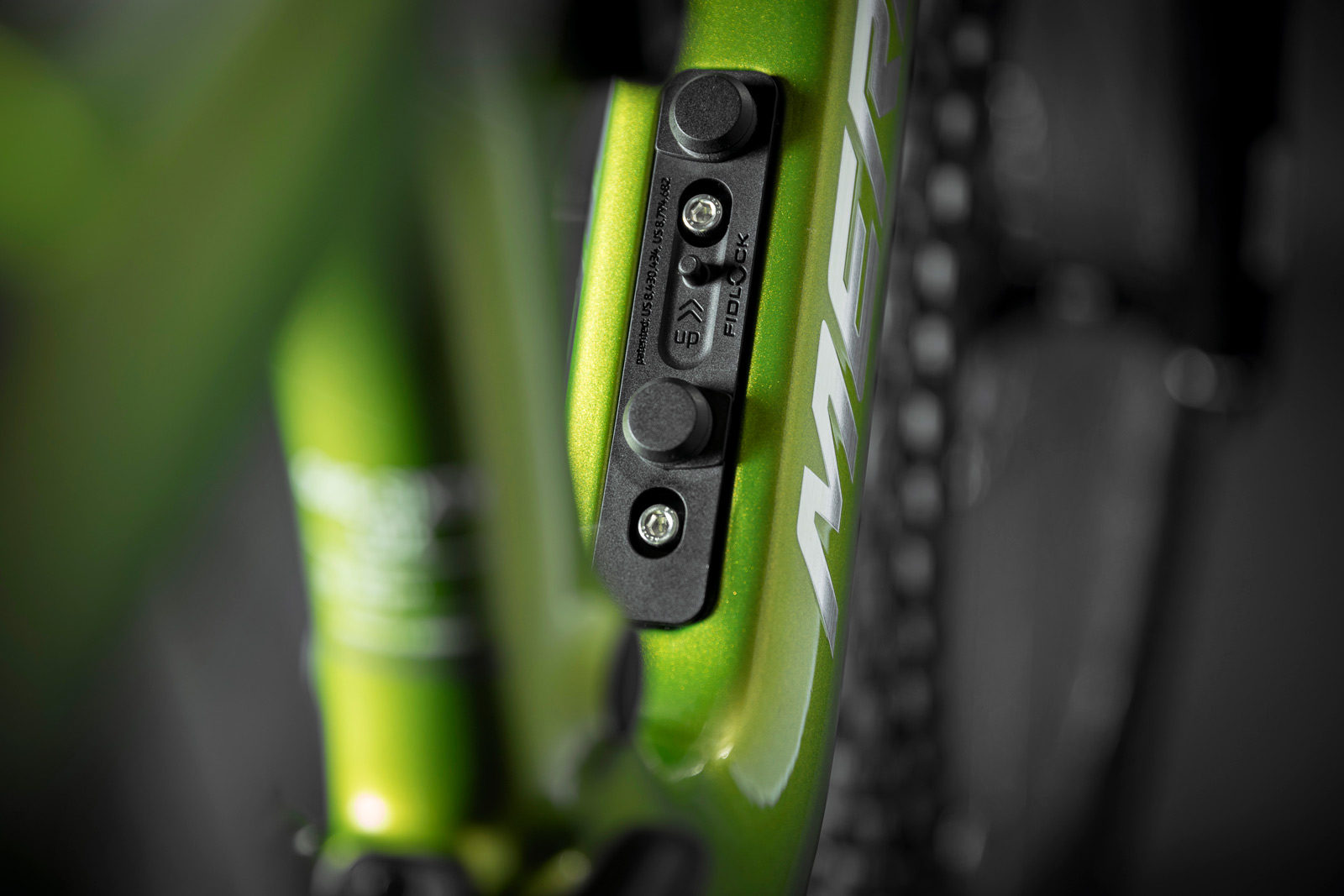 The carbon frames have a recess in the downtube that accommodates a FIDLOCK water bottle cage perfectly flush with the frame, allowing even the smallest frame sizes to fit a 600ml bottle 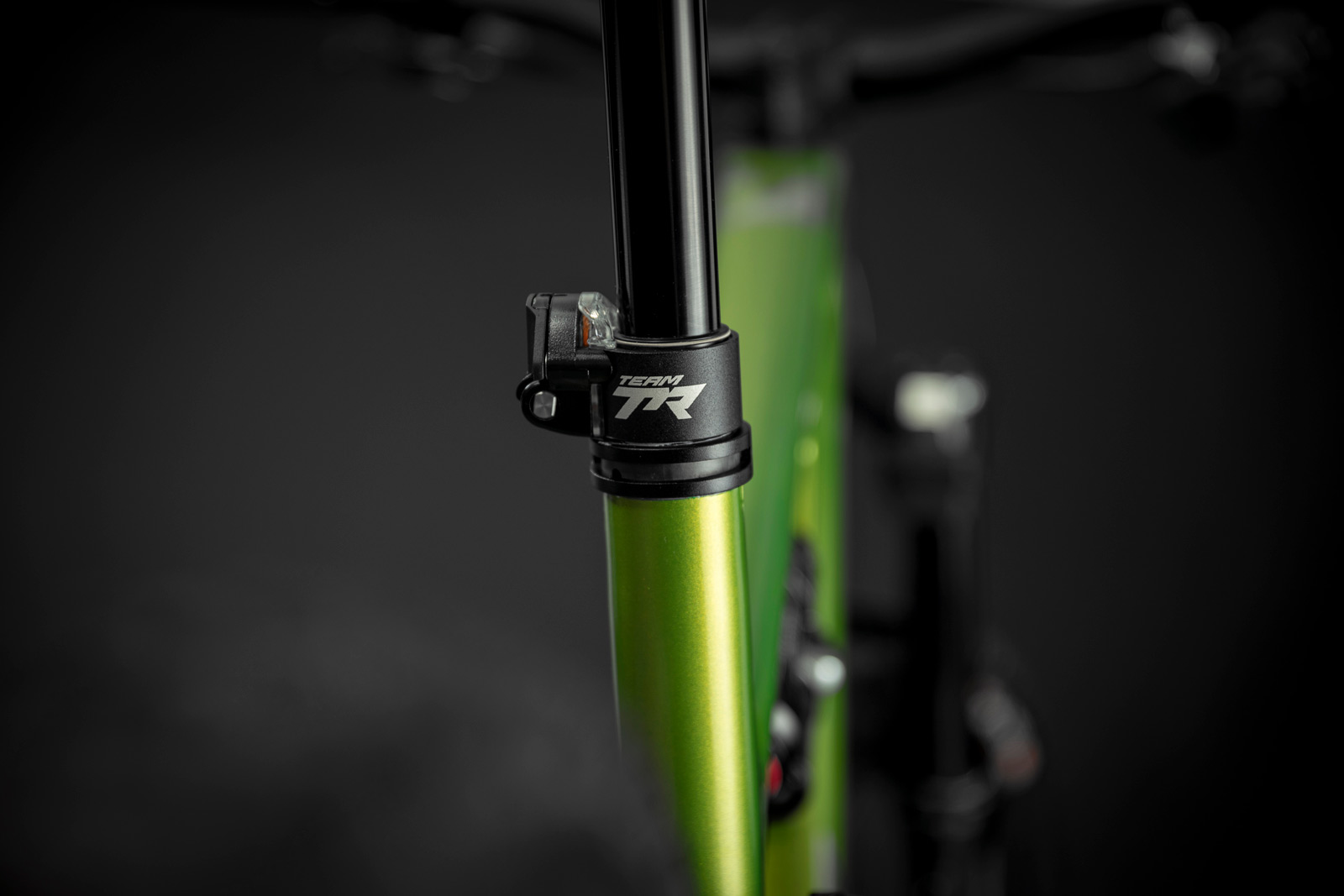 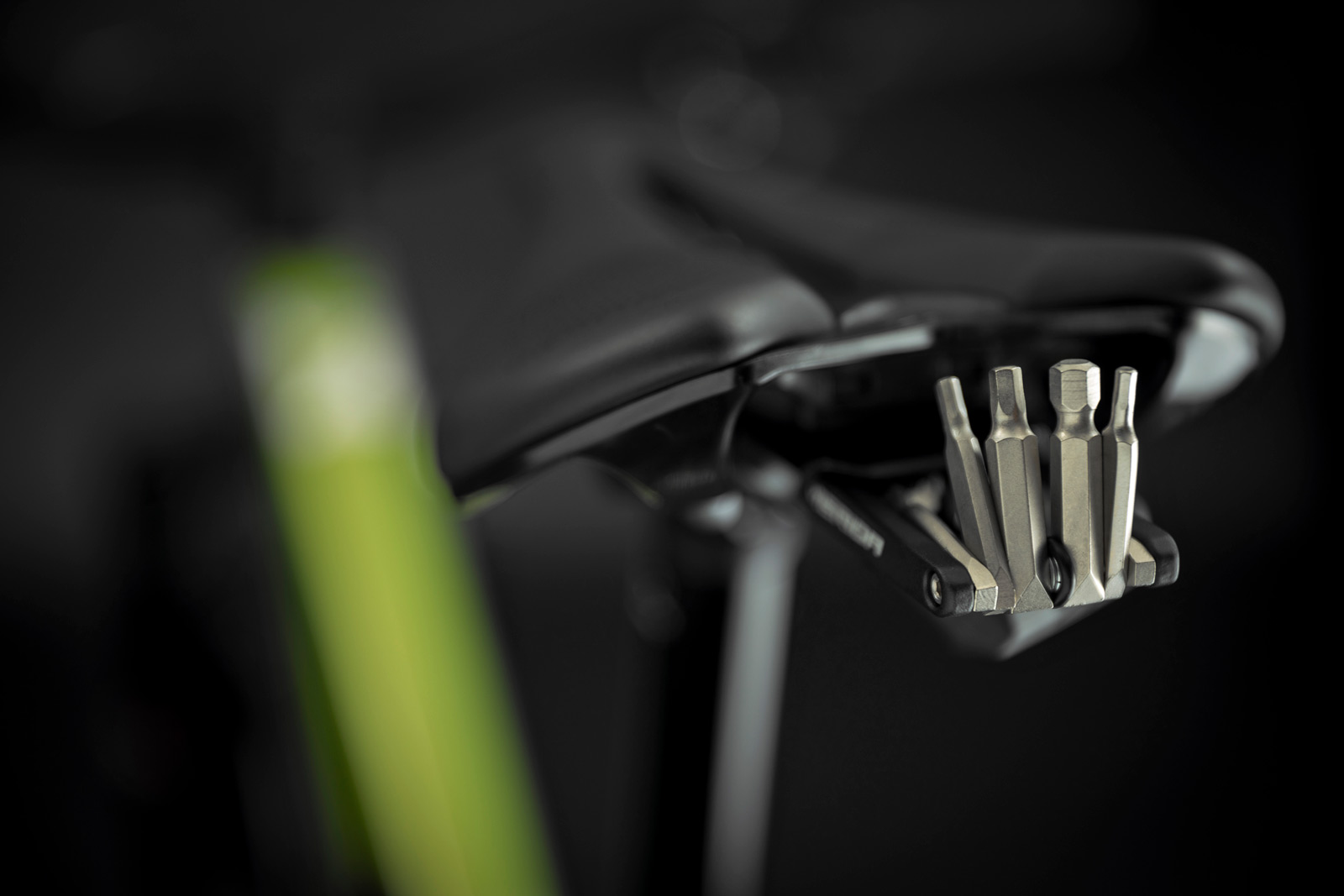 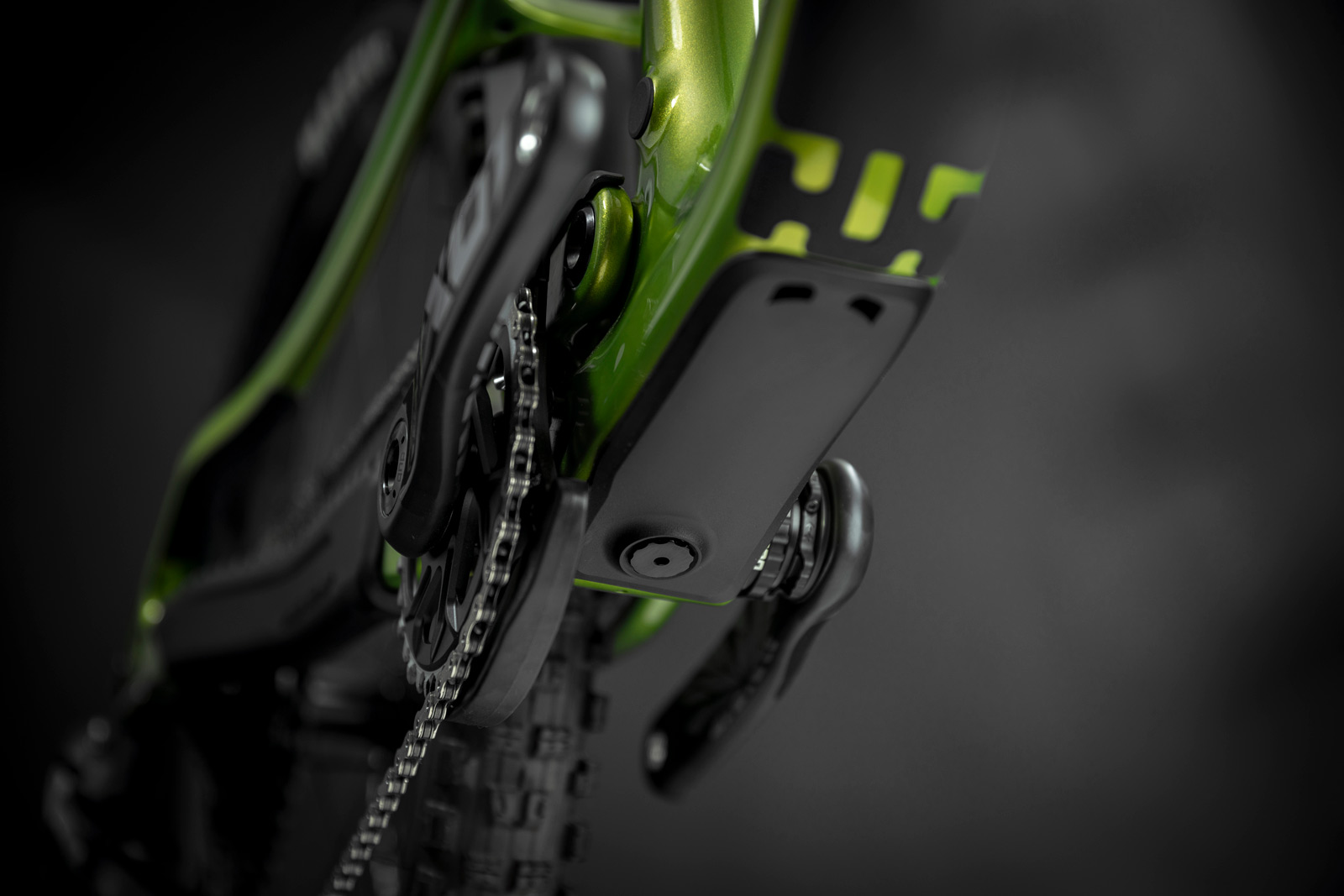 The carbon frames have a large Service Port that allows access to cable, and also storage of a tool roll that be affixed to the inside of the door. We are tld there is sufficient room for a mini-pump, CO2 cartridge, plugs and plugger. 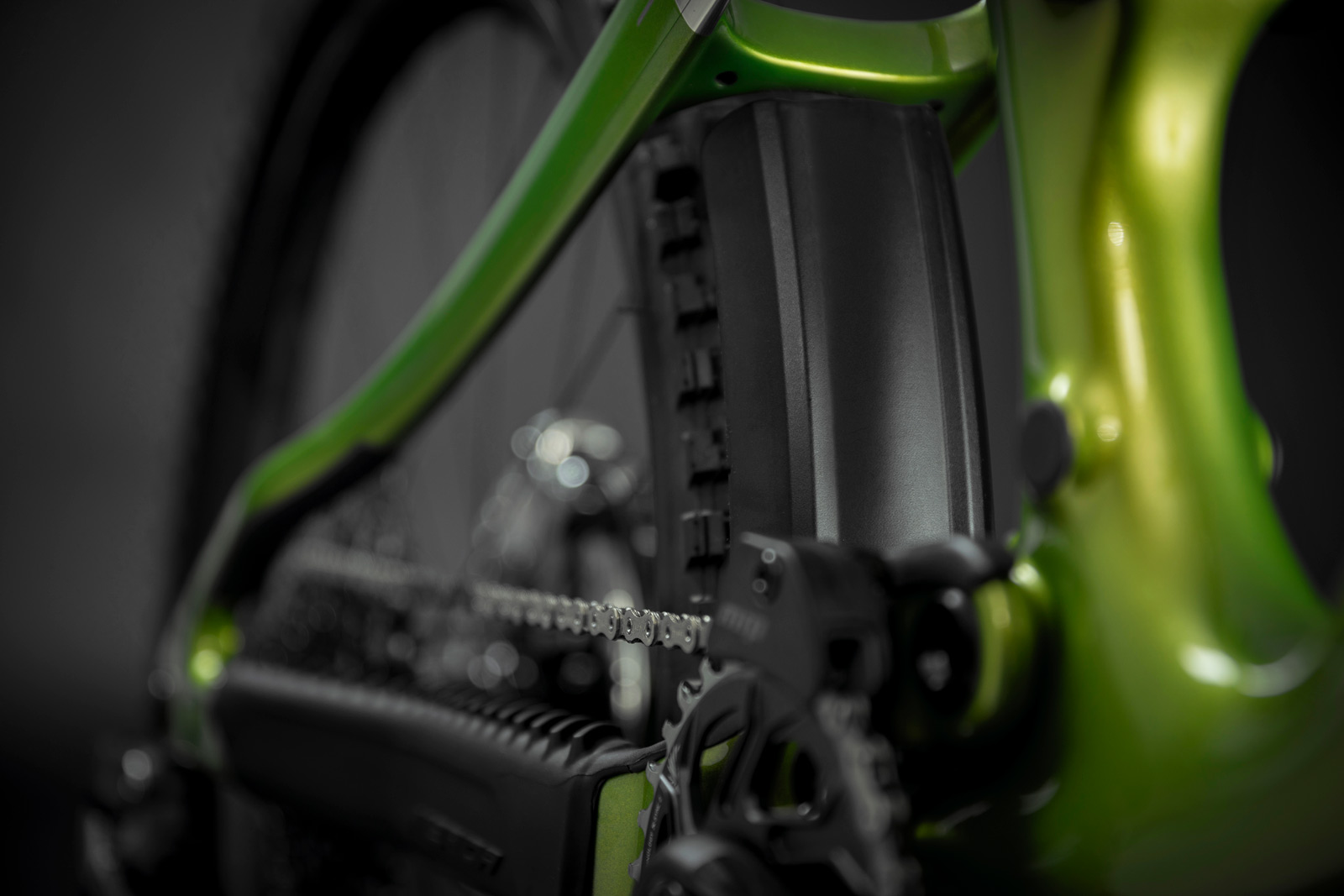 All models get the integrated rear fender, an extension for which can be purchased as an add-on 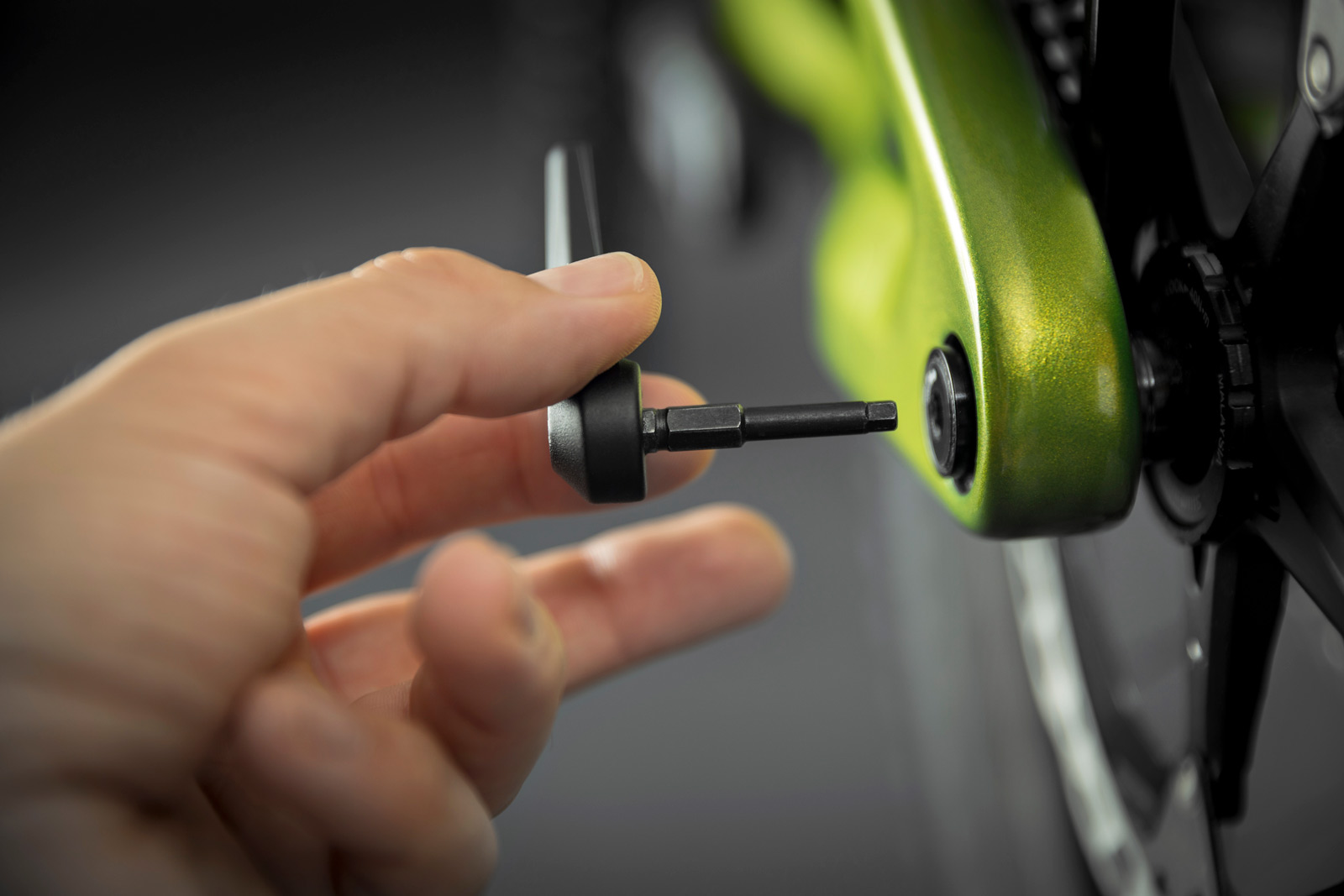 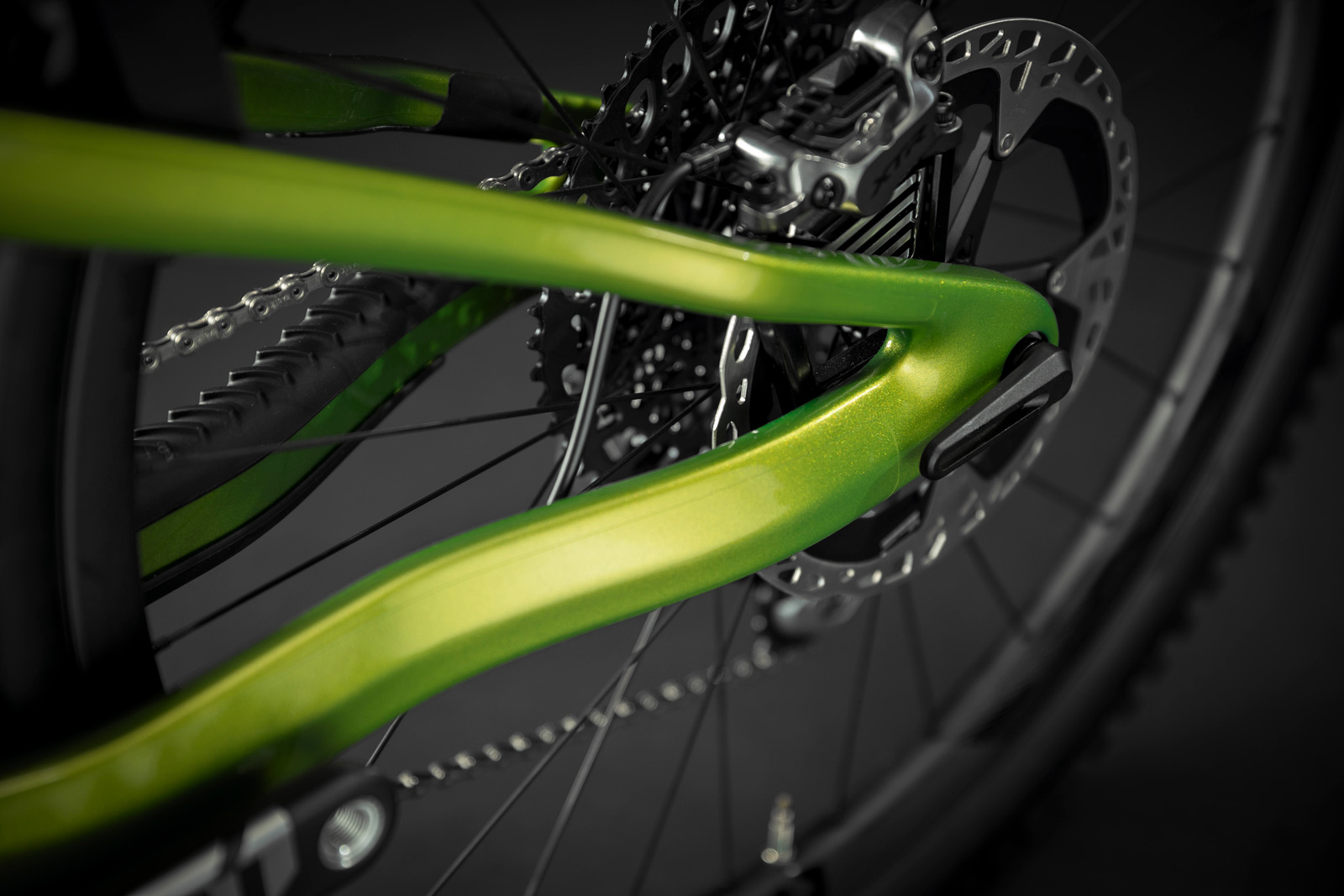 Merida bolt a 200mm post mount to the inside of the chainstay. Note the finned nature; we are told this gets pretty hot, helping to pull heat out of the brake caliper to reduce brake fade on long descents

For now, you cannot purchase the new Merida as a frameset. However, the following 10 complete bikes will be available as of October 2022.

For a full lists of specs for each model, head over to the Merida Bikes website.

These tick so many boxes, until the trail bike has an eighty degree STA. Too far down the rabbit hole for me!

Ooof, good point on the STA. If you couldn’t get the position you wanted pushing the saddle all the way back in the clamp you could go for one of these: https://www.fairbicycle.com/product-page/drop-best

At the price these Meridas are offered at, spending an extra $115 seems more than fair to get the position you need.

Too bad these bikes aren’t offered in the US.