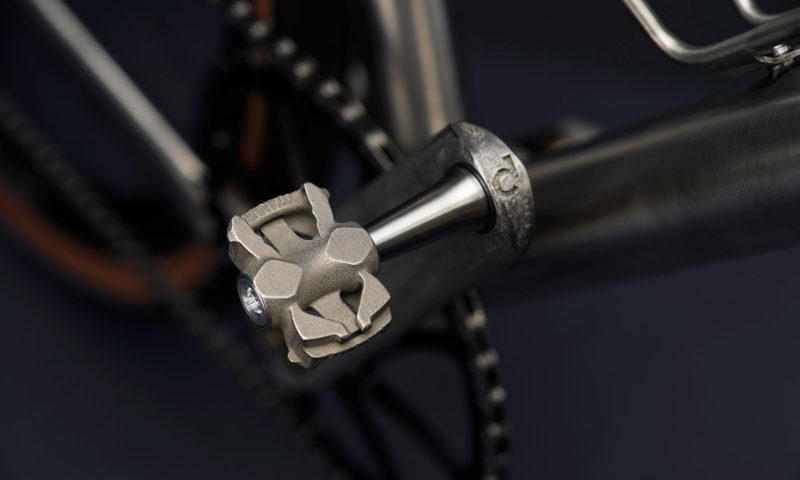 How do you make a lighter clipless pedal? Start with titanium. Or more appropriately, 3D printed titanium. That’s the approach of Titanum, at least. Citing the need for fewer parts with fewer failure points, the pedals can be lighter while while claiming to be stronger as well. Better still, Titanum claims their MyTi dual sided clipless pedal is optimized for both road and MTB use – and everything in between. 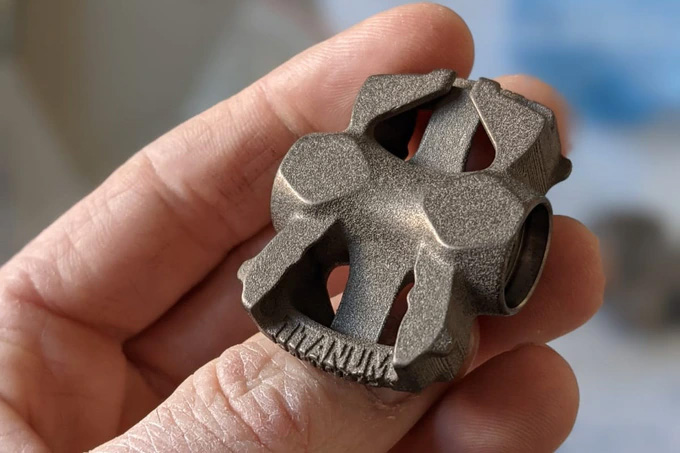 Partnering with a fellow German based company, Titanum enlisted the services of Element 22 to take advantage of their “patented, cutting edge sinter-based Additive Manufacturing processes.” According to Titanum, “Titanium (atomic number 22) is made in alloys that are nearly 2x stronger than typical strong aluminum alloys, and component made from Ti6Al4V saves about 40% weight compared to a steel equivalent. Therefore, Ti6Al4V has a better strength-to-weight ratio than either, which aerospace and aviation industries often use to reduce weight but maintain strength.”

Calling it their “Blattfeder technology,” the MyTi pedals rely on a patent-pending titanium leaf spring design which effectively eliminates moving parts for the retention mechanism. The Blattfeder name “refers to the horizontal ‘backstop’ spring that MyTi pedals use during clip-in. During clip-in, a so-called T-piece on the front of the cleat moves forward through a slot, and that pushes the blade spring down until a point whereupon the spring jumps back up in place. The blade spring then becomes a backstop that prevents the cleat from sliding backwards, to remain secured.”

The result is a pedal that can only be released by twisting your foot to the side – not from pulling up. The cleat has about 6° of rotational float, and releases at an “angle of less than 14°.”

The design also results in a super low stack height of just 7.3mm. To keep the bearing assembly thin, the pedals roll on needle bearings. 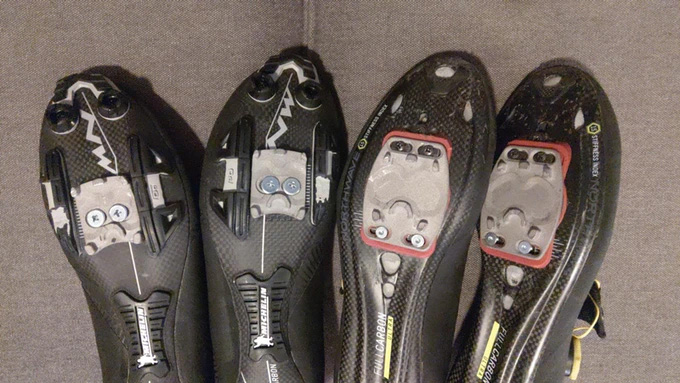 Early prototype cleats include both two bolt cleats for MTB use and four bolt cleats for road use. Titanum says that they are also working on three bolt cleats to truly cover all the bases. Production cleats will likely also be made from 3D printed titanium. 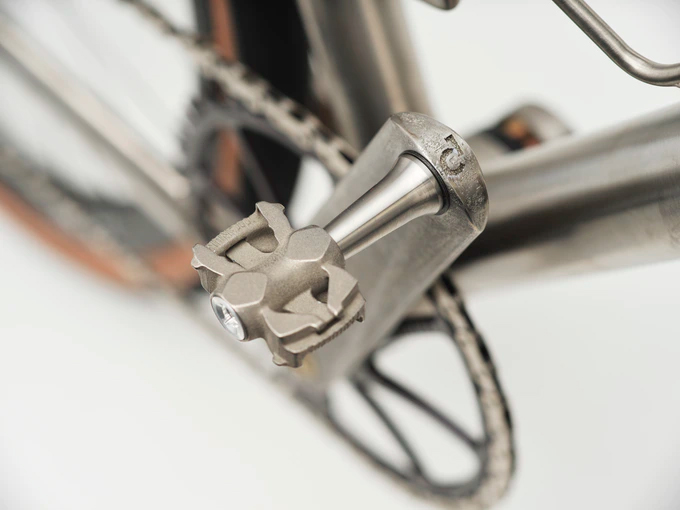 Pedals will be offered in the MyTi Ultra or MyTi R which differ in terms of the axle material. The Ultra uses a titanium axle to get the weight down to just 100g per pair, while the R gets stainless steel axles for a stiffer spindle that’s better for heavy duty use. That comes with a sight weight penalty bumping them up to 140g per pair, which is still impressively light. Note that Titanum’s claims of this being the lightest pedal refers to a dual sided clipless pedal. There are lighter single sided pedals out there, but we’re drawing a blank on any dual sided pedals less than 50g – especially if you include the cleat, which Titanum claims will only add +/- 46g to 54g per pair.

While still finalizing some of the details, Titanum just went to Kickstarter to launch the Mytis. Titanum expects the MSRP of the MyTi Ultra to be around €369, with Kickstarter pedals starting at €277 for the Early Bird deals. If all goes according to plan, Titanum expects to start shipping pedals by May.

These pedals are crying out for a review!

Am I the only who gets Kickstarter errors when trying to submit a pledge?

I am great friends with a dinosaur that will love these. I think his brother is a Stegosaurus

If they want to keep up with Wahoo/Speedplay, they had better have a power meter pedal soon.

sooo how do i adjust the float or tension?

Don’t you get it? These are *3D printed* titanium. So they’re very light. That’s why you need to buy them. Forget adjustability or serviceability. Only peasants need to bother themselves with such foibles.

Sorry, but not the lightest. That claim still goes to Aerolite pedals which are also 360 degree side entry. That said, these look WAY more usable.

Since Wahoo just got rid of the frog, this pedal just got interesting.

“Due to the extremely low stack height of the Titanum MyTi pedal system, using the 2-bolt cleats with SPD-compatible shoes in a recessed sole may require cutting or trimming a piece of shoe sole in order to clear the pedal axle. Otherwise, the shoe sole may collide with the axle and potentially impede clip-in or even retention. 2-bolt cleats will include a cutting template.”

Would’ve probably backed up the Early Bird option if it weren’t for this. Not really interested in taking an angle grinder to my shoes as a pre-requirement. Will wait for reviews.

You just need to add a cleat spacer underneath to bring it up to a regular spd stack height. Not a big deal. lots of company’s sell them.

I’m 99% sure they’re referring to the lugs you see on the bottom of MTB shoes, not a structural part of the shoe. I’ve trimmed away lugs that interfered with pedal spindles. It’s not a big deal.

Interesting design, but I’m also interested in the cranks in the picture, looks like Titanium eeWings but slimmer, anyone know who makes them?

@gonebikingmad – those cranks are Sturdy Cycles: https://www.sturdycycles.co.uk/ not sure if the cranks are properly released yet, but all over his Insta (and a pals bike too). They look lush, very tempted myself

Gonebikingmad – you need to check out Sturdy Cycles for the cranks. I have one of his frames, although unfortunately these crank weren’t available at the time!
Pedals look very interesting….will good to hear some ride impressions.

simplicity is nice. Unfortunately, it puts the complexity in the cleat. So I imagine that piece is more apt to jamming with debris etc, since there’s no where for it to go, except further into the cleat.

I believe the cleat is a simple plate with no moving parts. The pedal is a single piece with a moving “part” – really just portion of the part that can flex – it has a leaf spring in the 3D printed material (because 3D printing can accommodate material thin enough and with an alloy that is flexible enough).
I watched videos and that’s what I’m seeing.

Looks very very cool, not my cup of tea but neat product. Wish them success.

iirc, Aerolites were under 40gm/pedal and M2 Racers (also 360 entry) advertised at 49gm/pedal. I am nearly as old as the dinosaurs mentioned above…

These would definitely not work off road, off pavement even. The cleat/pedal engagement requires a broad clean surface without any stones or mud.

I have some old bebop/aero light pedals I could be encourage to part with if the price was right…
They are very light.

If Wahoo are to be believed, titanium and strain gauges don’t mix, as per CyclingTips’ recent podcast with them on the Speedplay pedal launch. They mentioned there that their POWRLINK ZERO pedals won’t have a titanium spindle for this reason.

We can probably also rule out a power meter version of these pedals as well.

Otherwise, this is really neat tech and I hope to see real-world validation and review.

Pm version?lol These are still in the Kickstater phase. Unless some larger entity buys them out these are eons away from a pm integration.

World’s lightest pedals…. behind Aerolite, and Ultralite, and Tririg, and m2 racer…

To be fair most of those are no longer made. M2 for instance hasn’t existed in over a decade