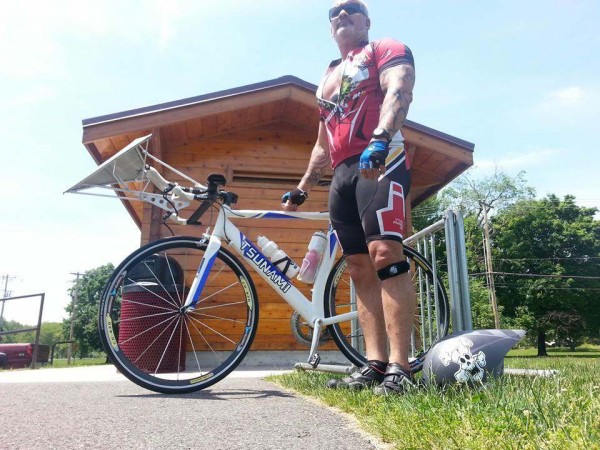 Life long martial artists Jim Wing has only been a cyclist for one year. But his goal of pedaling to the speed of 60 MPH under his own power may soon be realized. The key to achieving such a feat? …the “Air Spear.” See it in action, next. 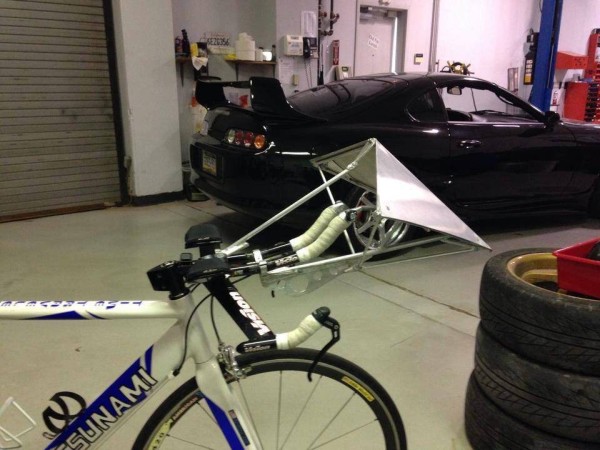 Wing is utilizing aerodynamics technology borrowed from automobile racing. His relationship with WORLD Racing’s technical director, Eric Plebani, has resulted in the creation of the “Air Spear,” a custom fabricated fairing design to direct airflow around Wing’s broad shoulders. 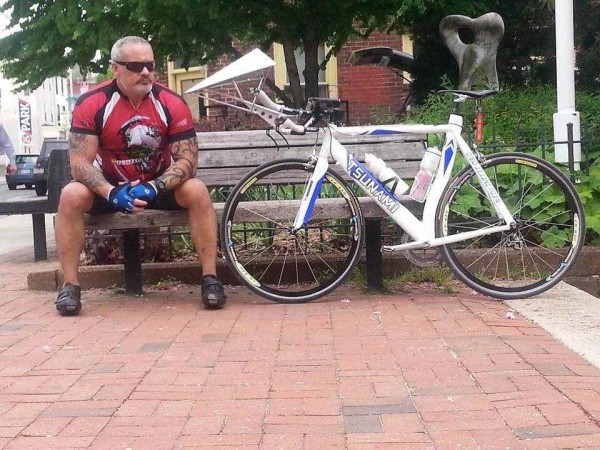 Wing tells the story of talking with Plebani: “I was complaining to him about my inability to maintain sustained high speeds on my bike.” The technical director’s assessment: “Jim, you are as wide as an ox! Don’t worry about losing bodyweight. You are like a diesel engine; you generate lots of power but have a very wide aero signature.” Hence was born the Air Spear concept. 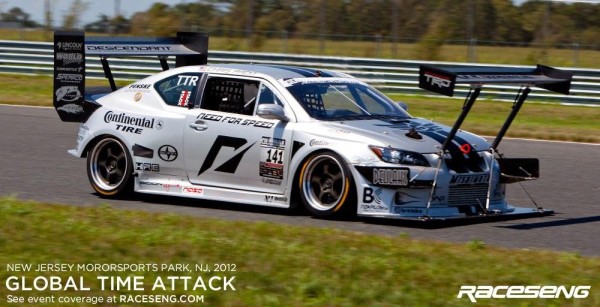 The inspiration for a front air dam came from Plebani’s work with WORLD Racing and its unique take on aerodynamics and auto design.

As a result of training with the Air Spear, Wing states he has “noticed the bike is incredibly fast,” noting, “I don’t create nearly as much wind resistance as when I rode without the Spear.” The above video documents Wings first “shake down” ride with the Spear leading the charge. Due to its relatively flat and straight course, Wing anticipates setting a course record at New Jersey’s City-To-Shore Century in September. 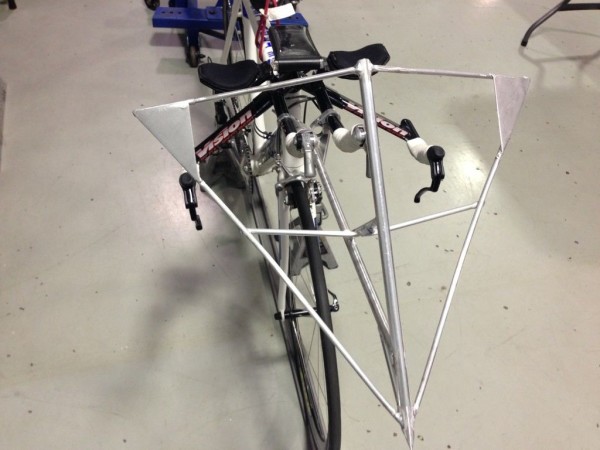 The Eric Plebani designed Air Spear is of aluminum construction, and a weight of 2.2lbs. This unique design is allowing one novice cyclist to chase his personal ambitions on his own terms. Jim Wing and Eric Plebani are two excellent examples of individuals passionate about their sport who are unwilling to let the status quo stand in the way of their goals. We salute them.

Interesting concept. I guess the last picture is the UCI legal version?

This fairing might give Wing a slight aero benefit, but there’s no way he’s getting to 60 mph on flat ground with it. You absolutely need a full enclosure to reach those speeds. Drag has as much to do with the low pressure zone behind you as it does with the high pressure in front.

Don’t think so. Record is in the low or mid 50s for a fully faired upright.

I’ll also be amazed if they let him participate in any mass start event with that thing.

This is funny. Novice cyclist, karate master, thinks he can hit 60 mph on the flats with a little wing. Not going to happen. Even if he did, giving that thing to the public would be a liability nightmare.

But GoPros mounted to helmets are Aero.

He’s unveiling this at a MS fundraiser ride? Please avoid mowing down me, my wife, the kids, friends, and those riding with MS while you “spearhead” yourself to failure.

Don’t the pointy edges on that thing just look like so much fun?

Bah. There’s also his weight to overcome. He may be strong but power to weight ratio has to be a factor. Put Cavendish or Sagan on such a rig and maybe it’s possible for a second or two.

Seriously, a super inexperienced tri-hard going after a course record at a charity ride with a big metal arrowhead on his bike. What could go wrong?

In the follow up story, Eric will design a fairing for Jim’s ego.

Maybe he could also learn to spin a little. You can see how bad he’s rocking back and forth in the video. And just maybe he shouldn’t go for “shake down runs” on a public bike path. Just a thought…

It looks like certain death for anyone he plows into. I hope he never rides that bike with any other cyclists in front of him

What kind of gearing would one need to cruise at 60mph? Appears to be a fairly std chainring…

For all the d*bags worries about getting speared, I’m pretty sure the edges can be rounded. Not many parts on a bicycle are pleasant to get get hit by– Weather it works or not, who knows–

I have to love this guy. True meatball innovator. Cheers bro, I like the passion. The little voice “Twenty five point eight” or whatever was max lol.

I just wish he would start with a more aggressive fit.. those shifters look nearly even with the saddle.

This is a joke. Right? Why is this an article? This guy slapped a death sentence onto his aerobars. There’s plenty of dumb stuff like this going on all the time. maybe next report on the guy that attached bar ends onto his bar ends to create the worlds most upright mountain bike?

I’m going to put one of these on my VW bus.

Spearing someone with a blunt edge sounds awful. What I really want to see is him ride this thing in a crosswind.

Ok recumbents have been running fairings for years, and they are a heck of a lot safer if you run into somebody.

Good on him for having a go.
Bike tinkering / experimentation is to be applauded rather than derided.
Although he might be a bit of a dag, he’s also a legend for trying.

(Dag is an Australian and New Zealand slang term. In Australia, it is often used as an affectionate insult[1] for someone who is, or is perceived to be, unfashionable, lacking self-consciousness about their appearance and/or with poor social skills yet affable and amusing. In New Zealand, it is used to describe an amusing, quirky and likeable person (as in, “He’s a bit of a dag”)
The literal meaning is a dung-caked lock of wool around the hindquarters of a sheep – an abbreviation of “daglock”)

Right, this shouldn’t be an article.

Going out for a “shake-down” on a public bike path is downright irresponsible and thoughtless in every way. Hopefully someone can help this “novice” biker understand that trial runs and course records have no place in an area shared potentially shared with true novice bikers. Public bike paths are a place to provide safe thoroughfare and recreation, not KOMs and speed runs.

He should install this on a tandem and get Stephen Seagal to ride with him. I bet they can hit 120 MPH.

Definitely not the ‘pointy’ end of aerodynamic research. All that forcing his body to tuck low and behind a fairing and he still hasn’t covered much, wait till he gets passed by a few highracer recumbents with the riders already in a better aerodynamic position just by laying relaxed on a reclined seat.

It is possible, but with a recumbent bike.
http://funride.hubpages.com/hub/RECUMBENT-BIKES
Live your dream 🙂

Wow! You road bikers are a Bitchy bunch… Did you used to slate other peoples clubs and carts, when you were all Golfers a couple of years ago.

@lev – We all know (and are probably bored by) the “cycling is the new golf” trope, but I seriously doubt that the nerds that read and comment on this are the type this cliche refers to.

Geeze, just let the dude have some fun with shadetree engineering. This is clearly not going to market yet we’re crapping on someone’s personal goal. Realistically there’s more to reaching a speed like that than just a wedge on the front of a bike, and for us armchair engineers this same design could be done with tubing/bolts/duct tape. So Graeme Obree knows a bit more about the physics of Vmax on a bike and has proven himself. But with this guys martial arts background, I’m not going to tell him to his face that what he wants to do is impossible. Ride on black belt, ride on.

I saw this on Kelly Drive in Philadelphia. My first thought was is this guy trying to get a tan with that thing up front.

Most of you probably have never seen 35mph on a descent with a tailwind. What would be a better article to cover? A strava kom circle jerk?

Looks like a 52 chain ring, wonder what his cadence would be at 60mph.

60mph on the flats?? Never gonna get there with that fairing. Every time that pointy leading edge comes off of 0-0 angle of attack the drag coefficient goes up. Watch the wobbling of the point with every stroke. Drag goes from side to side as it goes off center. Any cross winds will make for an interesting ride. Hang it out of your car window @ 60mph and you will see.

If you want to get aero with a fairing, take a lesson from current speed skiers and the shape of their leg fairings and helmets. With speeds 150mph+ they have learned a lesson or two on slicing through the air and handling. Pointy leading edges were tried back in the early 80’s with poor results. It was quickly found that if your nose wasn’t dead center into the oncoming air, one would get radically pulled side to side. ‘Ruddering’ we called it. Not fast…and scary!!

Remember that when airspeed doubles, drag multiplies by four.

I guess he needs a AYHCSMB sticker. Yeah he’s a novice cyclist and his dream may seem absurd but he’s dreaming and enthusiastically cycling, so I love that bikerumor is embracing him and his story (remember all the “normal,” i.e., non-cyclist, people think we’re all crazy). He needs some more experienced cyclist/coach mentoring. We’ve seen this guy on the bikepath in Philadelphia, PA, USA. If he reads this there’s an informal weekly time-trial on Martin Luther King Blvd (West River Drive) every Sat morning at 7am…it’s the perfect setting to work on his speed and test out iterations of the setup. There’s tons of experienced cyclists in our area and coaches. Email any of the contacts on our website and we can pass on info about the time trial (it’s not run by us) or other resources.

Karate instructor = aeronautic engineer.
To all you PhD’s of Science, you wasted you time.

wow an aero dynamic road bike – who could think of such a thing?!?

OH hang on truely aero bikes were outlawed decades ago, and those who still work in aero human power have not just stuck a pitiful fairing on the front of a tri bike.

Why did bike rumor bother posting this? An embarrassment….

How is this even worth an article? If the write wanted an article on bikes and aerodynamics, why not do even a little reading on recumbents? They’re all about efficiency, aerodynamics and fairings of different designs and sizes. As a builder and metalworker, that looks just scary, not to mention the questionable aero benefit. Here, http://www.recumbents.com. It’s a freebie.

Pretty sure the “air dam” on that car is for down force, not drag reduction….