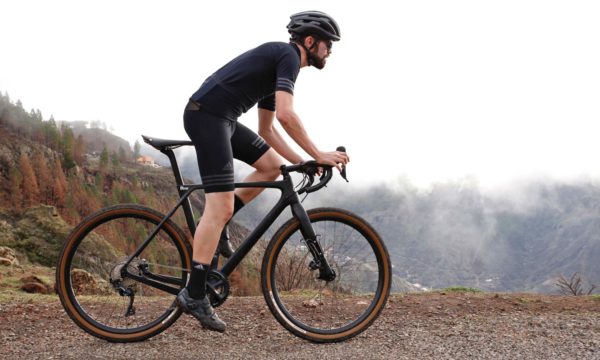 Named after western Berlin’s favorite escape into nature, the new carbon mixed-surface gravel bike – the 8bar Grunewald is built to tackle any road or trail. Inspired by their adaptable Mitte bikes, 8bar designed a faster all-road bike with traditional road geometry but enough clearance for your 650b mountain bike tires. 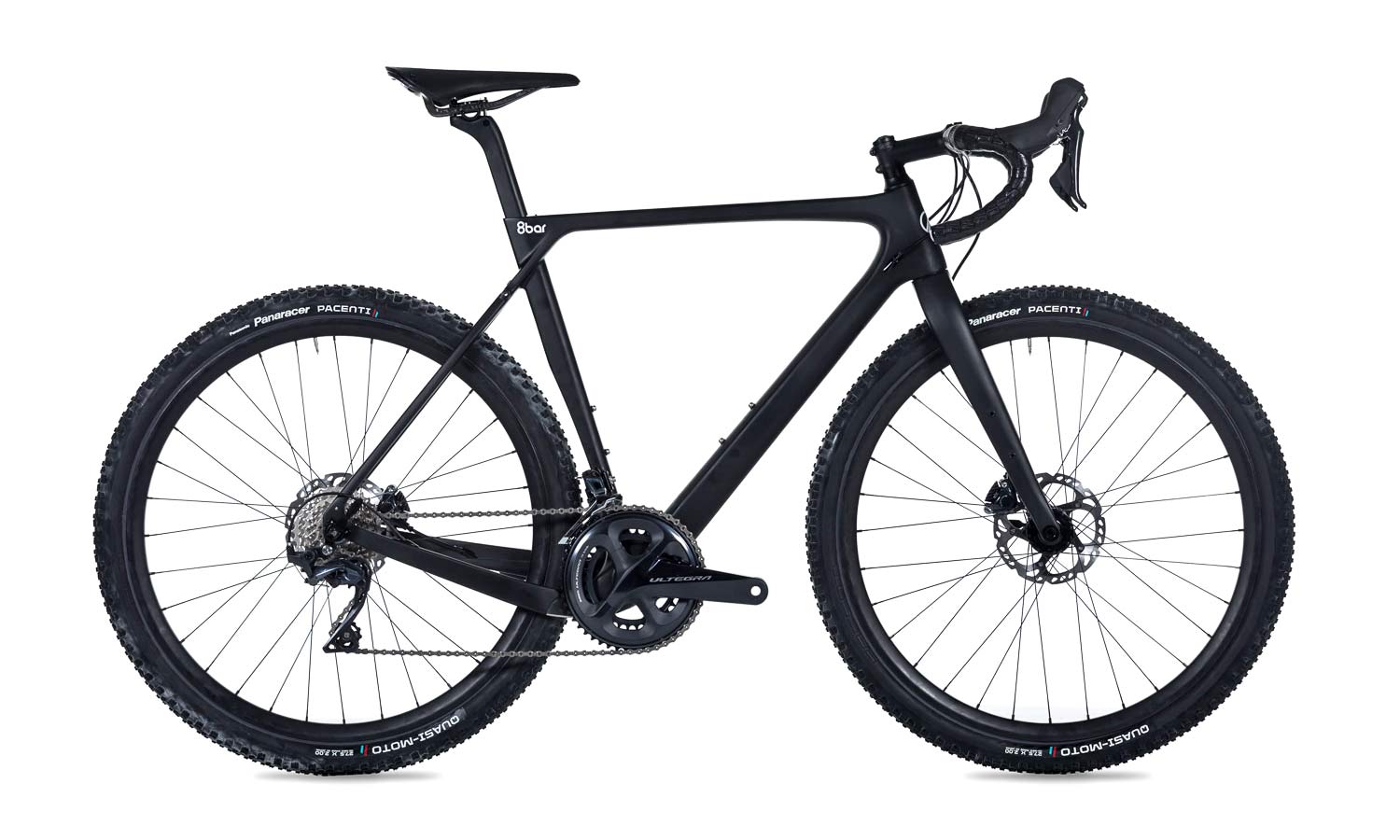 Like we saw yesterday with Wilier’s TT Turbine on the complete opposite end of the cycling spectrum, the Grunewald also looks surprisingly familiar for a gravel bike. Carbon 650b gravel bikes are evolving down a similar path, and there’s nothing revolutionary looking in the Grunewald’s oversized tubing, proprietary seatpost & hidden clamp, or its dropped chainstay design. Again that’s not necessarily a bad thing, as 8bar refines the do-it-all gravel all-road bikes, with up to 2″ tire clearance and at an affordable pricepoint. 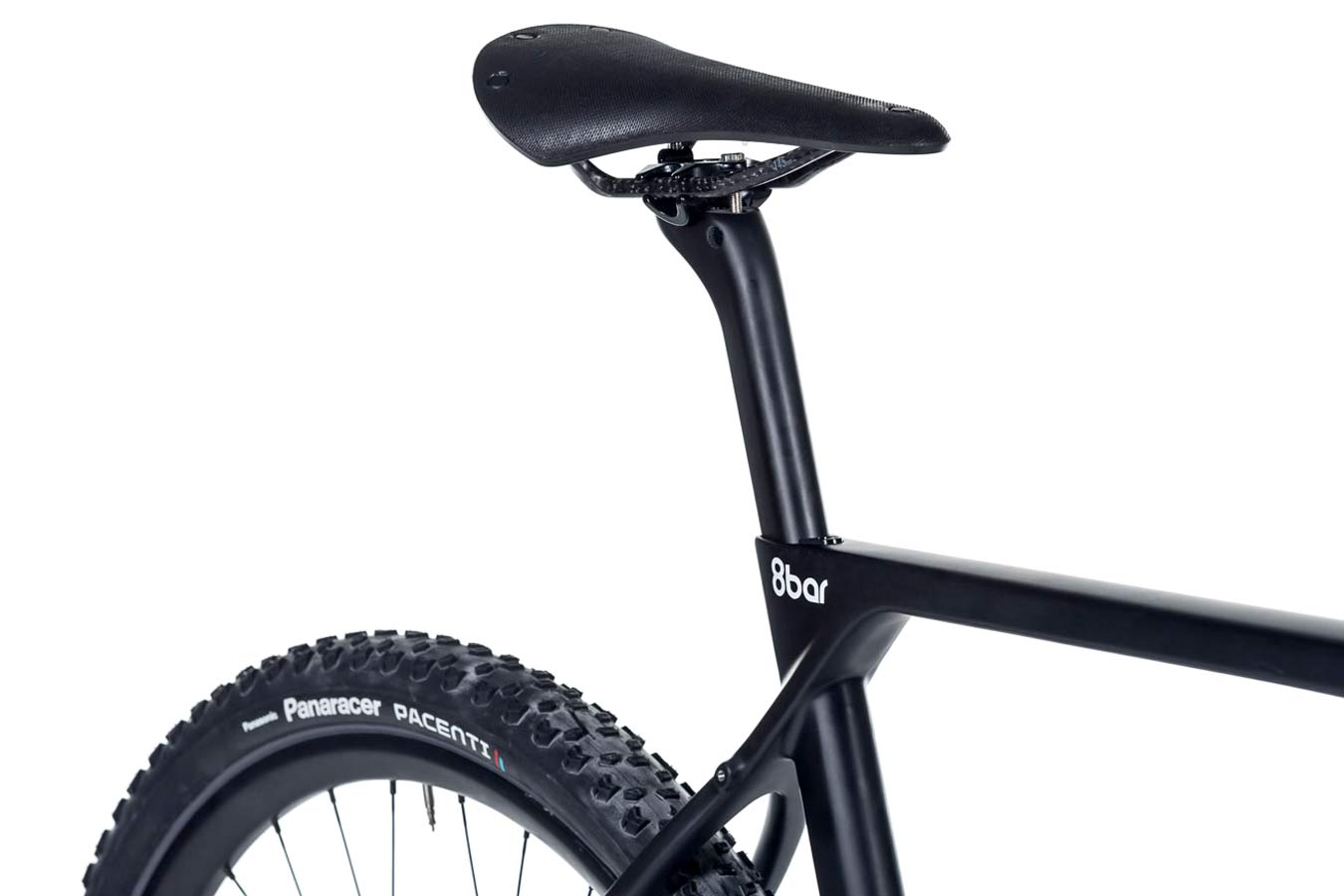 Tires & gearing seem to be the big deciding factors in gravel adventure versatility, and the Grunewald seems to do well on both accounts. The new bike gets tire clearance on both carbon frame & fork for up to 27.5 x 2″ (650b x 51mm) or 700c x 40mm rubber.

As for gearing, the bike features a removable front derailleur braze-on tab and can run up to a road standard 53/39 double. Plus, it gets standard modular internal routing that will work with electronic drivetrains as well. So the choice is yours, build it as 1x adventure bike or a fast, fat-tire road hammering machine. 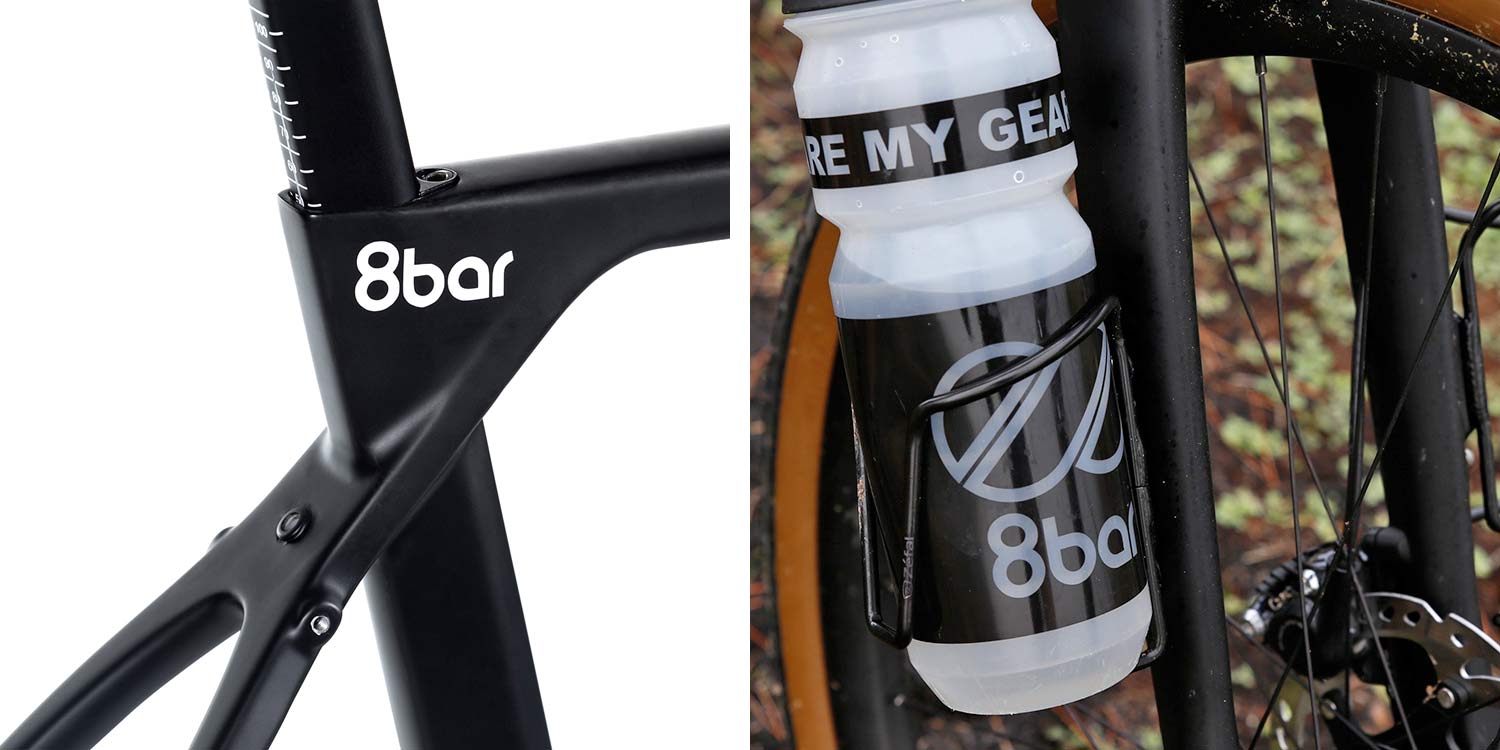 Adding more adventure versatility, the bike gets full rack and fender mounts. On the full carbon fork that also means a set of extra bottle cage bosses on each leg. 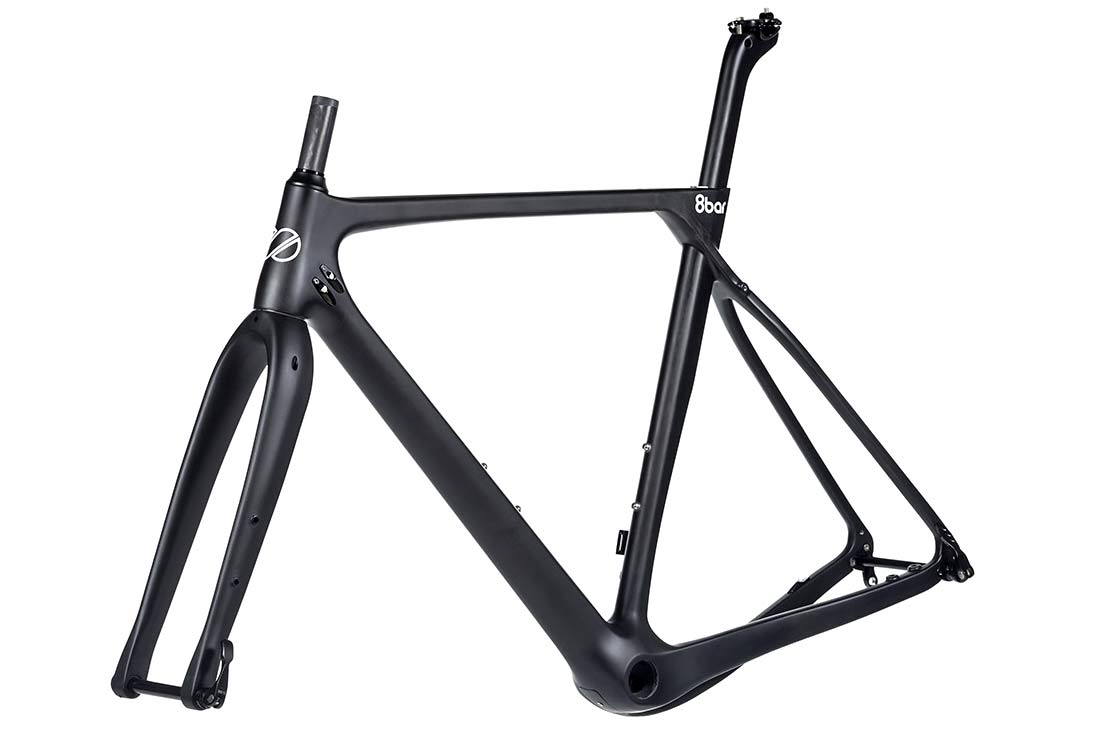 The UD carbon Grunewald gets flat mount discs so can be run with either 140 or 160mm rotors. And like the original Exploro, it pairs a 12mm rear thru-axle to a 15mm one in the front. It also goes with a tapered 1.125-1.5″ and a pressfit BB86 bottom bracket. 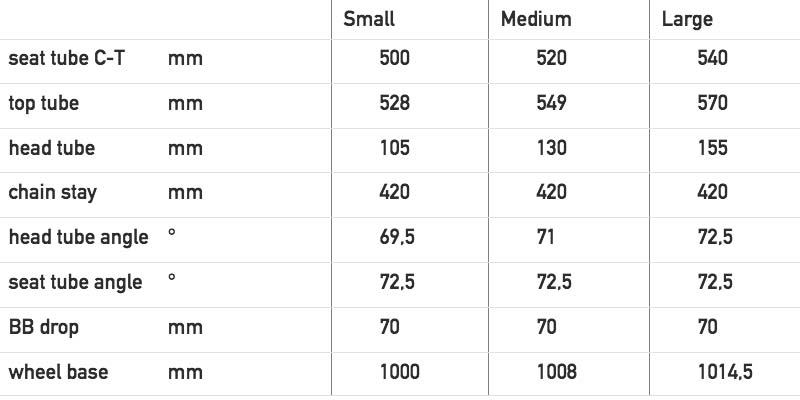 Geometry-wise quick, road-like handling was 8bar’s goal for the 1150g frame (small). The Grunewald sticks with average road angles 71° headtube/72.5°seattube and mid-range 420mm chainstays that offer a balanced but still agile feel that should mix well on both tarmac and loose surface riding. The bike is available in a four size range (S-XL), although we haven’t yet seen the numbers for the XL. 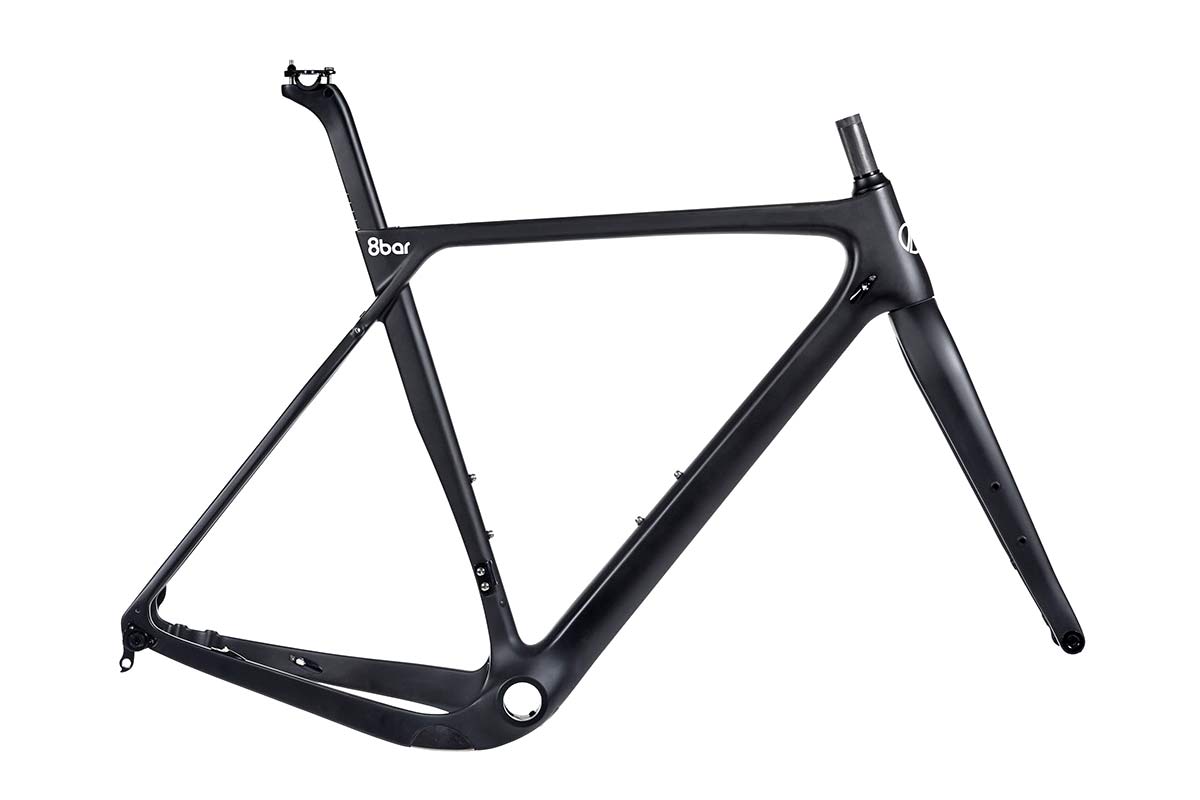 Like with the debut of most of their new bikes, 8bar is introducing the bike now and taking pre-orders right away (until the end of May). That gives buyers a chance to get a discounted price if you pay up front, with delivery set for August 2018. 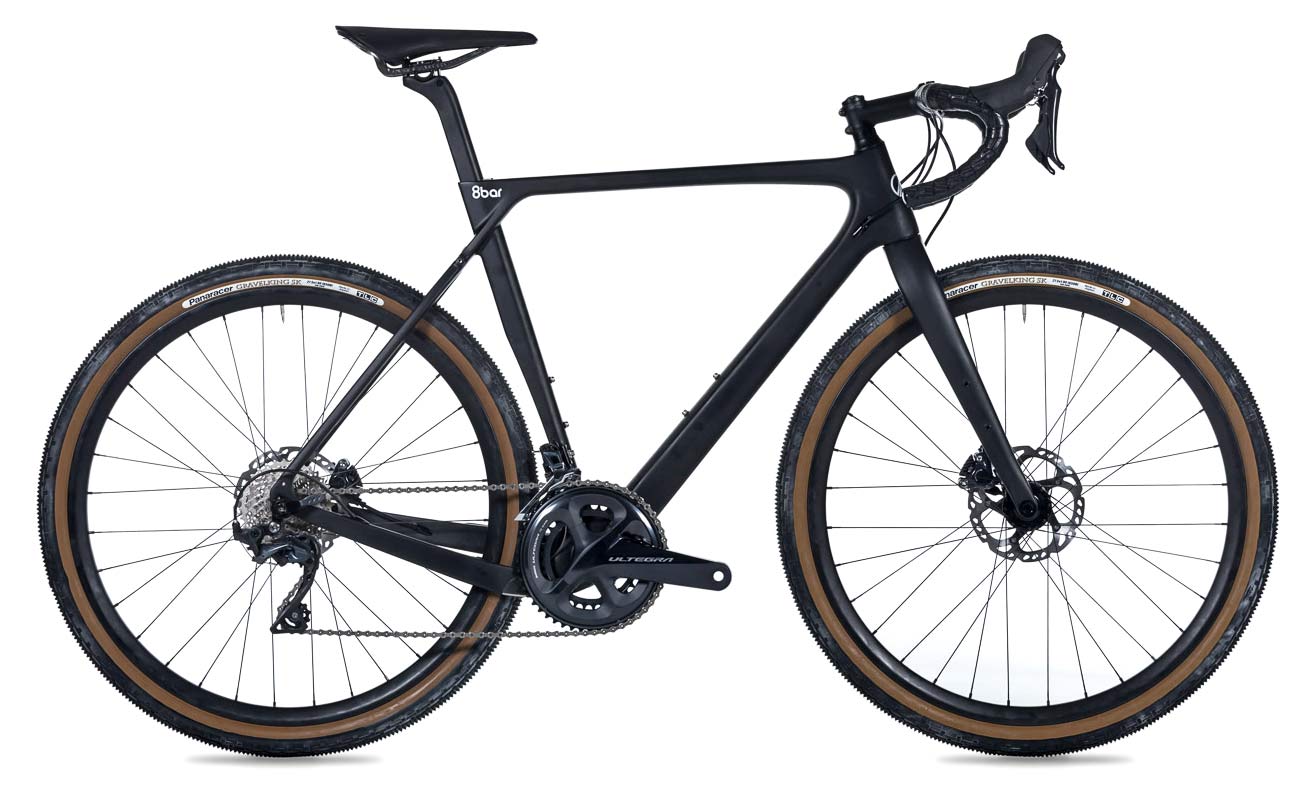 Nice off the shelf carbon mold, looks just like the bridge brand from Glory, etc.

That frame has been available for more than 1 year for 40% of that price, in any color you want and without annoying sticker.

Wow, thanks for pointing that out!

Pretty similar. Looks like the velobuild has a much broader seat tube & post. Better geometry & size options, though.

On another note, 15mm front thru-axle with flat-mount? I don’t think the outer splined lock-ring (necessary for 15mm T/A and centerlock rotors) will work with the flat-mount. That leaves you with 6-bolt hubs.

It will work with centerlock. I have the velobuild frame mentioned above with xtr rotors.

I’ve been running this for a year. The lockring gets close to the fork mounts, but it fits fine.

Seriously who need road geometry off road ? It took 30 years to get rid of it and we don’t want it back. Coincidently it happen mtb geometry work perfectly fine on the road and does not even slow you down. Swap the tire on an mtb and you’ll be surprised by it prowless on the road.