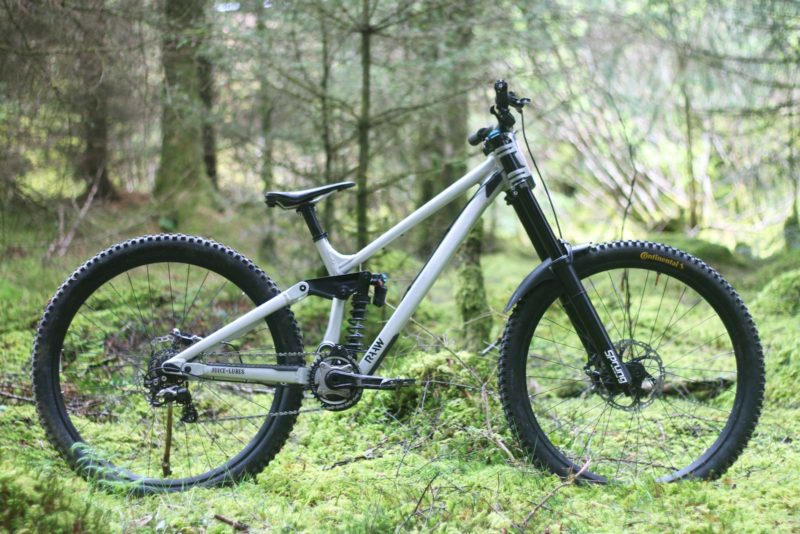 It is no secret that RAAW Mountain Bikes are developing their first downhill mountain bike. It broke cover underneath the 555 Gravity team at the Downhill World Cup season opener in Lourdes. At Round 2 in Fort William, Scotland, we swung by the team’s pits to see KJ Sharp’s race rig in the flesh, and to find out more about it from the team’s Race Engineer, Dan Roberts. Here’s what we know about the RAAW DH bike so far. 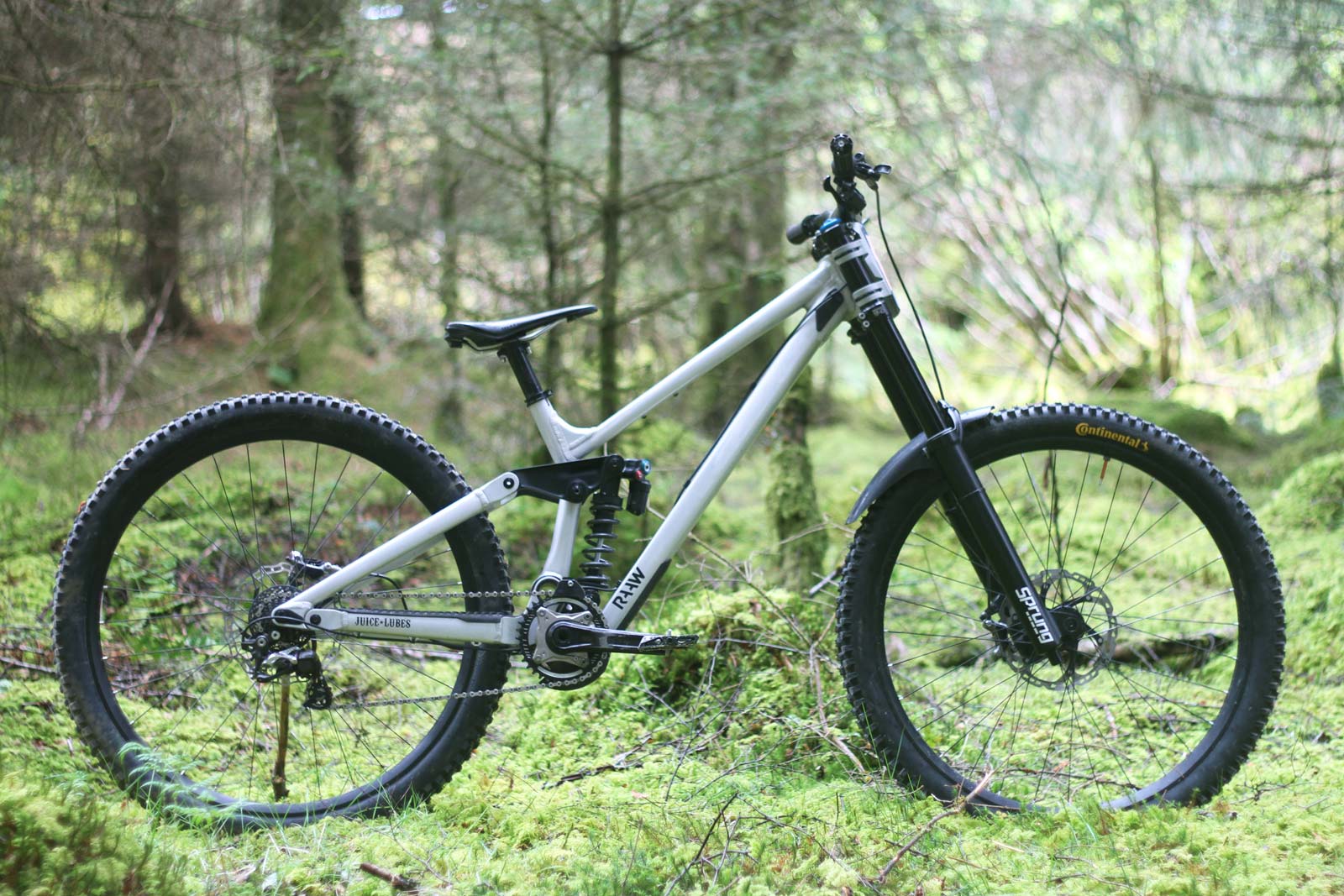 KJ Sharp’s medium frame RAAW DH pictured here has a 63° head angle, 455mm reach, 345mm BB height and 450mm chainstay length (long setting). The frame is made of  6066 aluminium alloy, with some hardware made of 7000 series and others made of steel.

First up, it sure does look like a RAAW, rocking the same four-bar linkage seen on the Madonna enduro and Jibb trail bikes, with an absolutely massive main pivot. In fact, aside from an over-sized headtube and much slacker seat tube, there’s not a great deal that sets it apart from the Madonna V2.2, at a glance anyway. The bike is still under prototyping, but the bikes we saw at Fort William looked fairly production worthy. 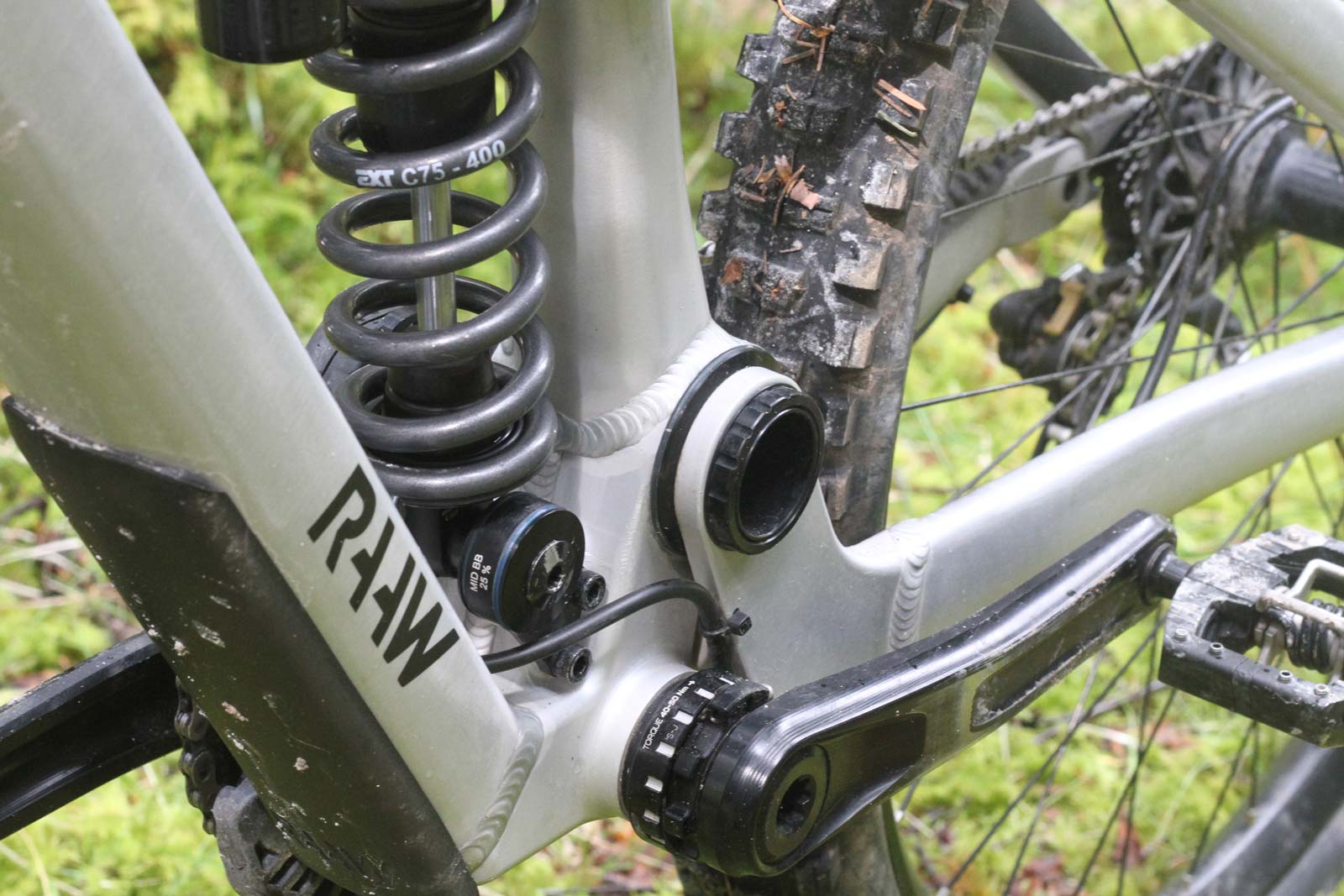 No one is questioning the durability of that monster main pivot; it has an outside diameter of 52mm 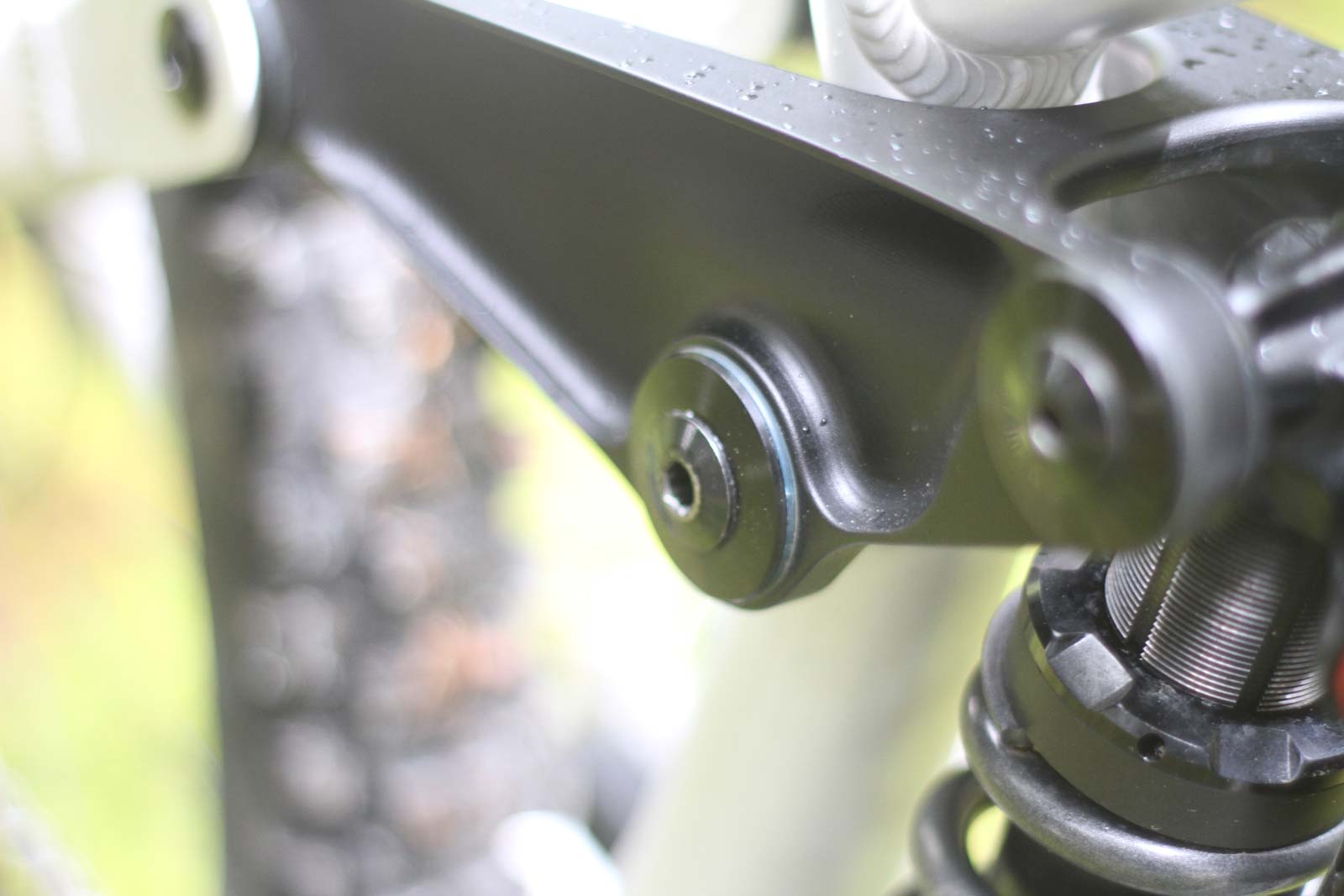 Seals outboard of the pivot hardware are the first barrier against water and dirt ingress, slowing the flow of those contaminants into the pivot bearings and helping to keep that all-important grease inside 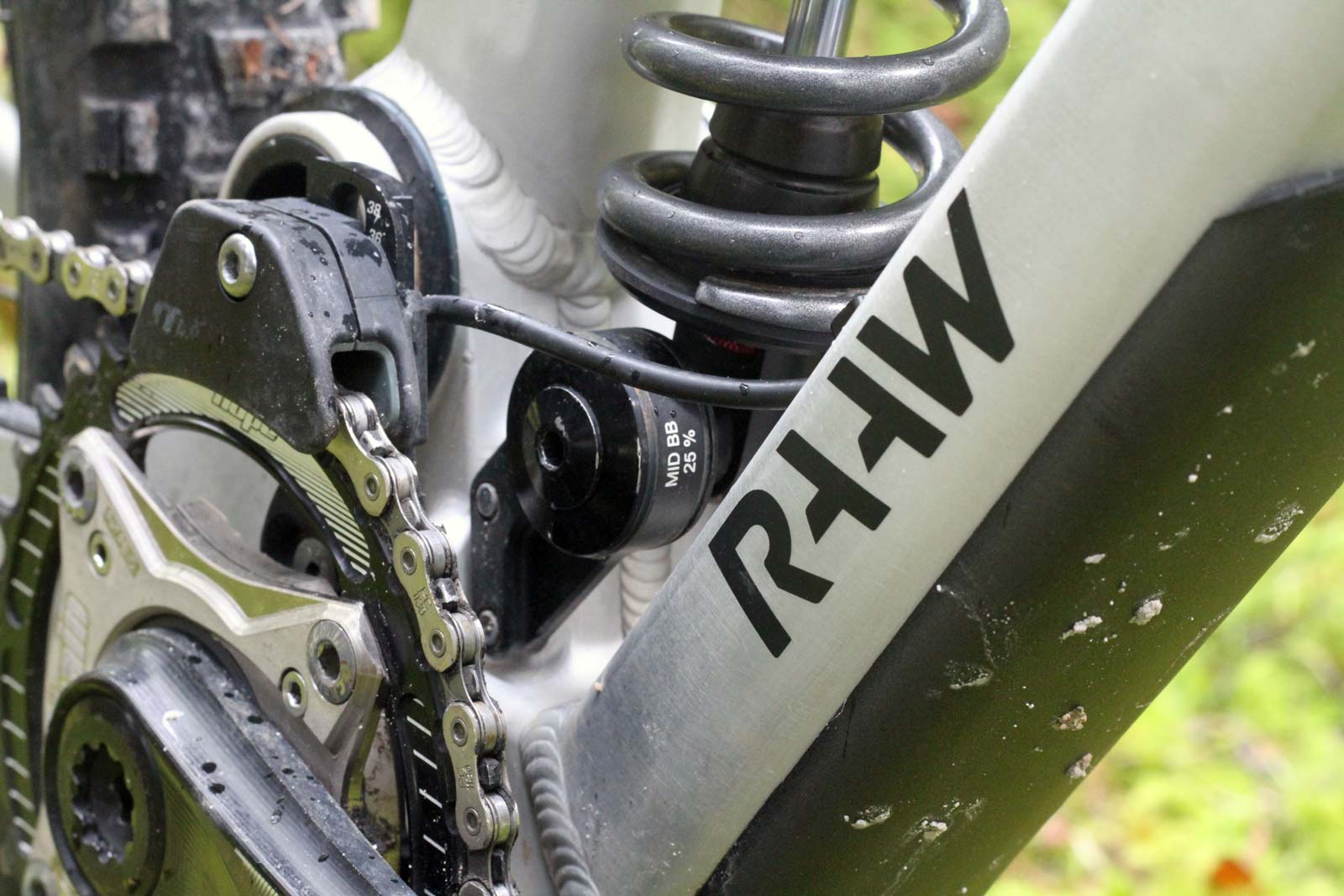 At the lower shock mount, the mounting tab on KJ Sharp’s bike tells us she ran it in the middle bottom bracket height setting, with overall progression at 25%. Race Engineer, Dan Roberts, told us there are currently 9 different shock mount tabs available to the team, allowing them to play around with 9 combinations of bottom bracket height and overall progression; there are three different BB settings and three different progression settings; 23%, 25% and 28%.

Word is that a tenth set of lower shock mounting tabs are on their way, tailored to allow the team to switch out that 29″ rear wheel for a 27.5″, running the bike in a mullet configuration. The new shock tab will likely go some way to correcting for the much lower bottom bracket and, thus, slacker head angle that comes with the smaller rear wheel. 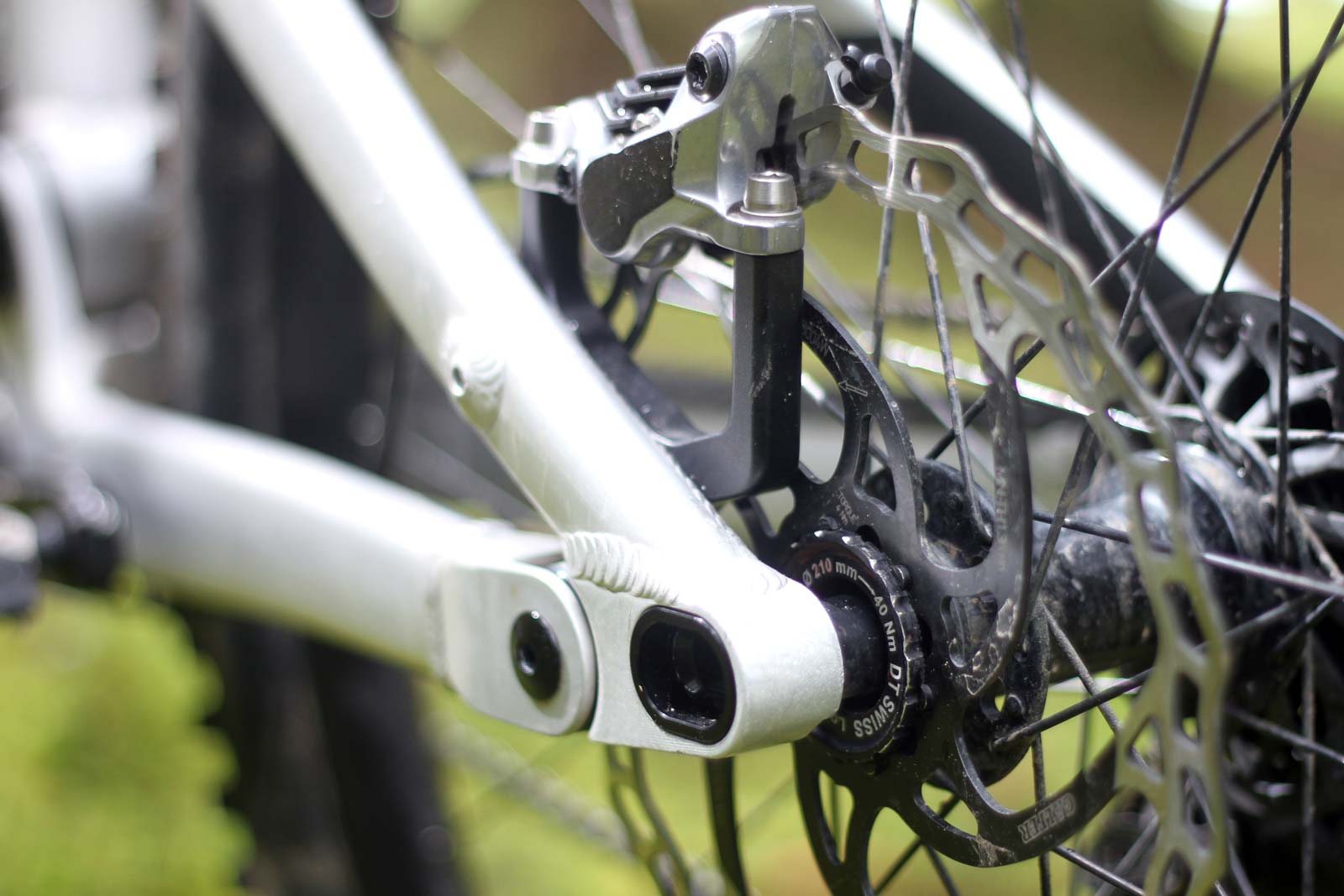 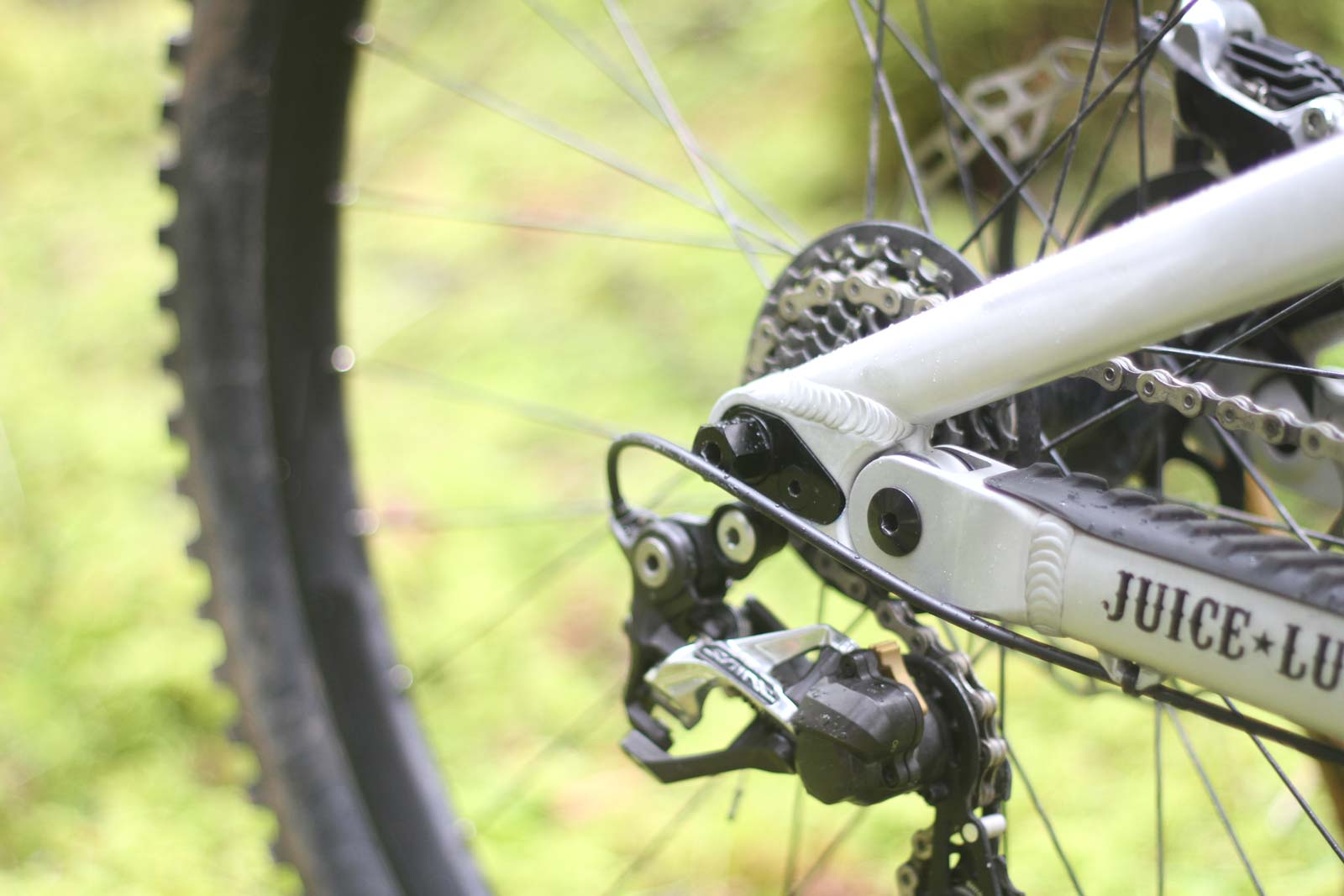 On top of its clean-cut aesthetic, four-bar linkage layout and over-sized main pivot, the RAAW DH Bike carries over other design features from its shorter travel siblings. At the rear axle, for example, the thru-axle is essentially keyed-in to the dropouts, creating a rigid connection between the two, locking the left and right seatstays into place. This helps the rear-end resist rotation and bending, and it should also stop the axle from undoing while you’re riding, too. 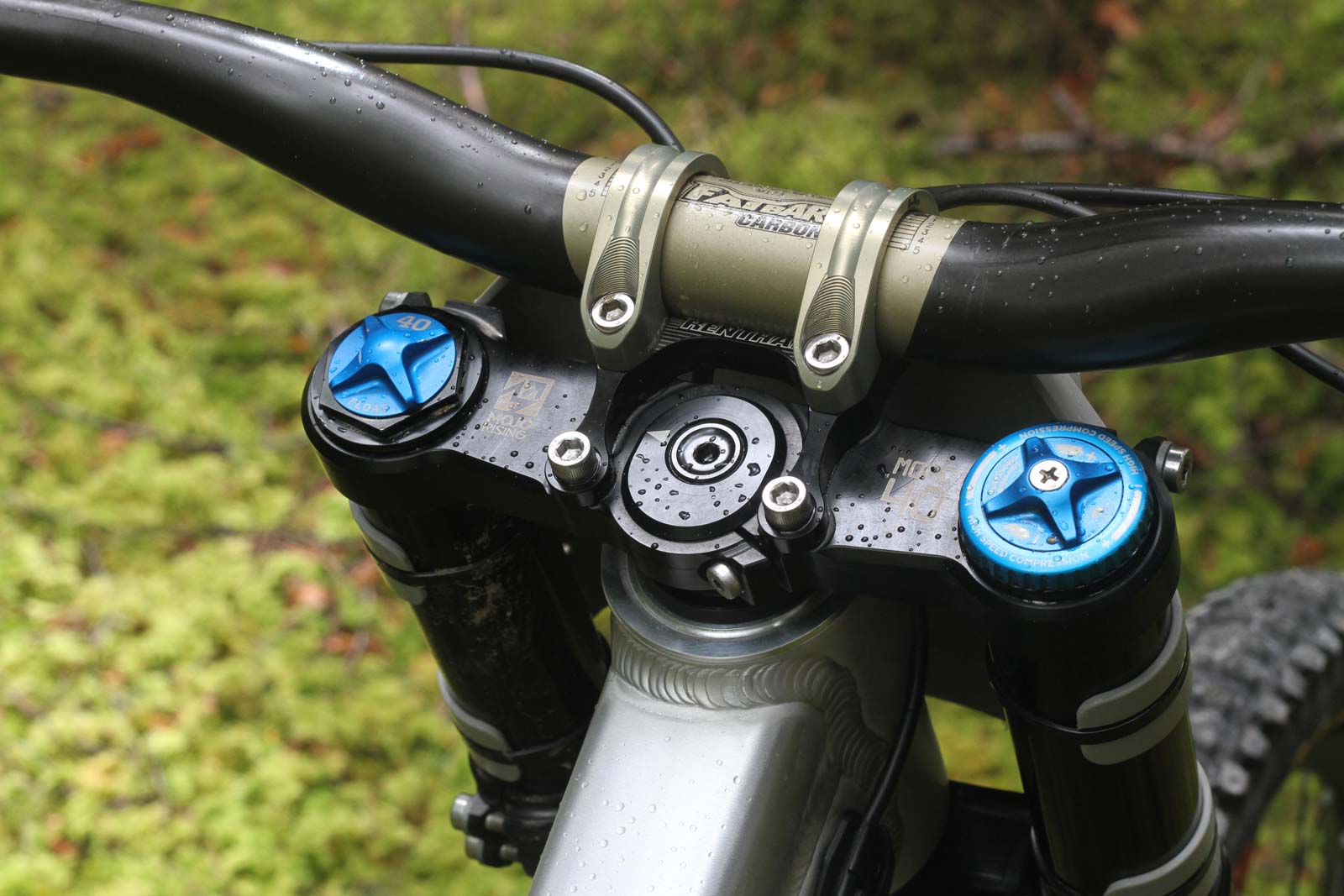 In the cockpit, a 56mm diameter upper headset configuration permits further adjustments to both reach and head angle, the latter by +/- 1°. Each can be altered independently or in combination, and there are 9 possible combinations in total.

Expected release date for the RAAW DH Bike is early 2023 Updates will come your way when we have more information. If you’re super stoked on the bike and want to hear more about where it came from, check out the video below featuring Dan Roberts and RAAW Mountain Bikes Managing Owner, Ruben Torenbeek, discussing the story so far.