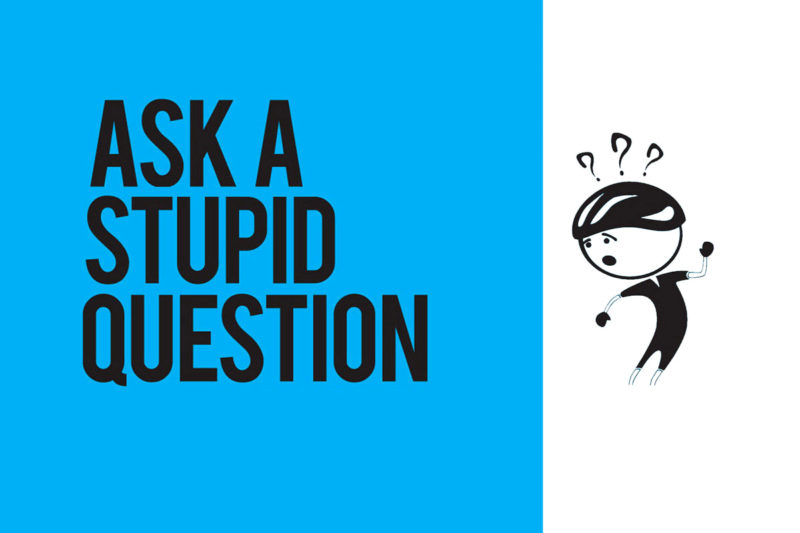 Welcome back to the Bikerumor Ask A Stupid Question series. This week, we’re back on the brakes, with Ricard Bages from Galfer and Jude Monica from Magura fielding your tech questions on how rotor size relates to modulation, the brake bleeding process, and whether or not the oft-forgotten hose can offer some marginal gains in braking performance.

Regardless of rotor size, once the rotor is locked by the caliper, the wheel will skid. Also, as was mentioned in one response (with reference to a previous installment of the Ask A Stupid Question series), as rotor size increases, modulation decreases. Might it make sense that a smaller rotor might make more sense to maintain control and sometimes might actually stop faster because it allows more modulation and requires more force to lock up? Of course, bike handling skill is a big variable in a skid, so the question is kind of academic.

Galfer: Rotor size increases the braking torque proportionally. For example, jumping from a 160mm to a 223mm rotor, braking torque is around 40% increased. On the other hand, cooling power is increased too. The ratio between force on the lever and braking torque changes when rotor size is increased, but the human brain is easily capable of fitting the new ratio according to the floor grip. 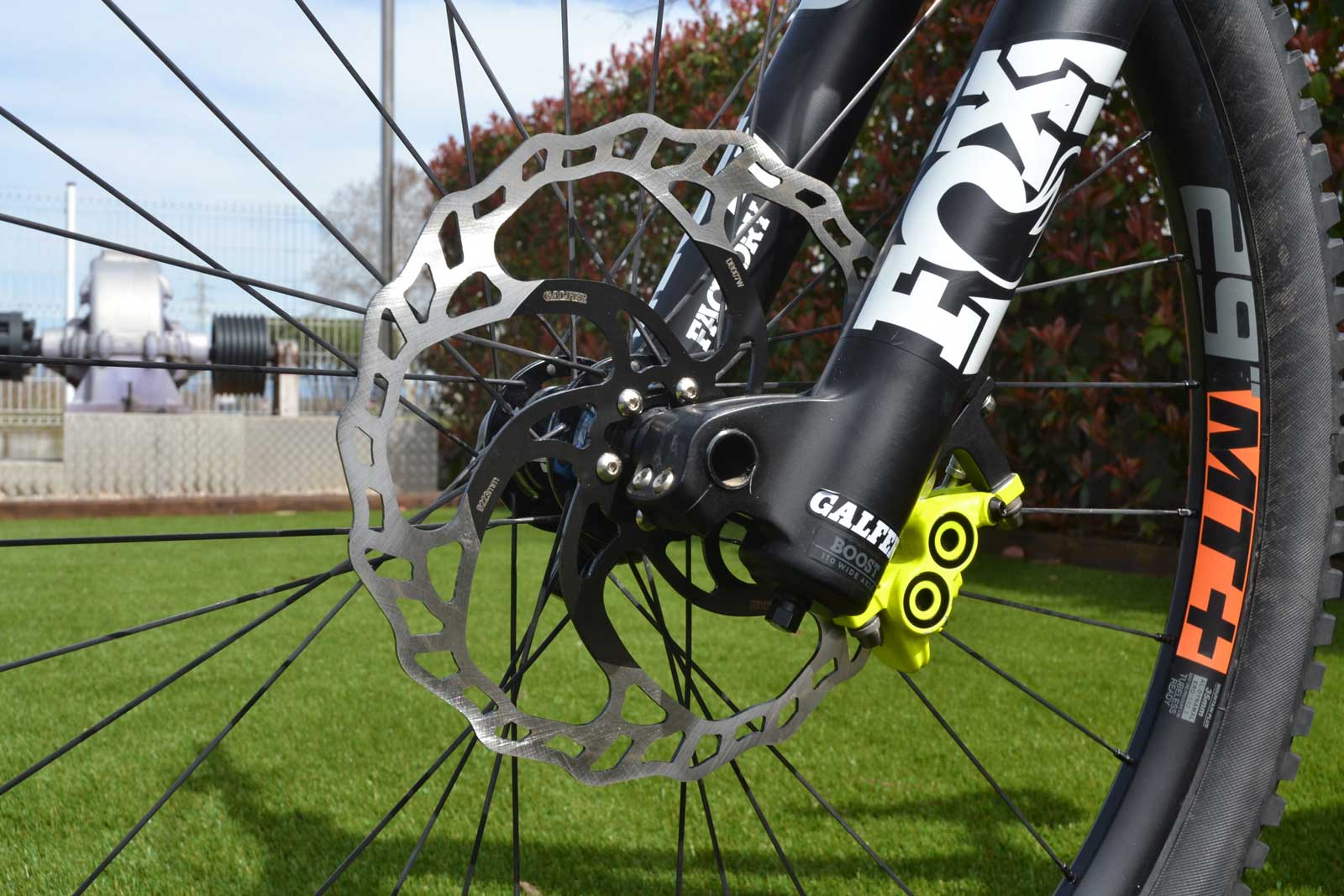 The Galfer Fixed Disc Wave brake rotor is available in 1.8mm and 2mm thick versions, laser cut from stainless steel with high carbon content; get it in 160mm, 180mm, 203mm, and 223mm for 6-bolt with some centre-lock options too.

To get a good predictable braking torque, it is very important to choose the pads correctly. Some friction materials change drastically the friction power depending on the surface pressure. Others give an aggressive grip from the very beginning without modulation. Galfer pads are known to offer good modulation and keep the performance along the duration of the pad’s life. 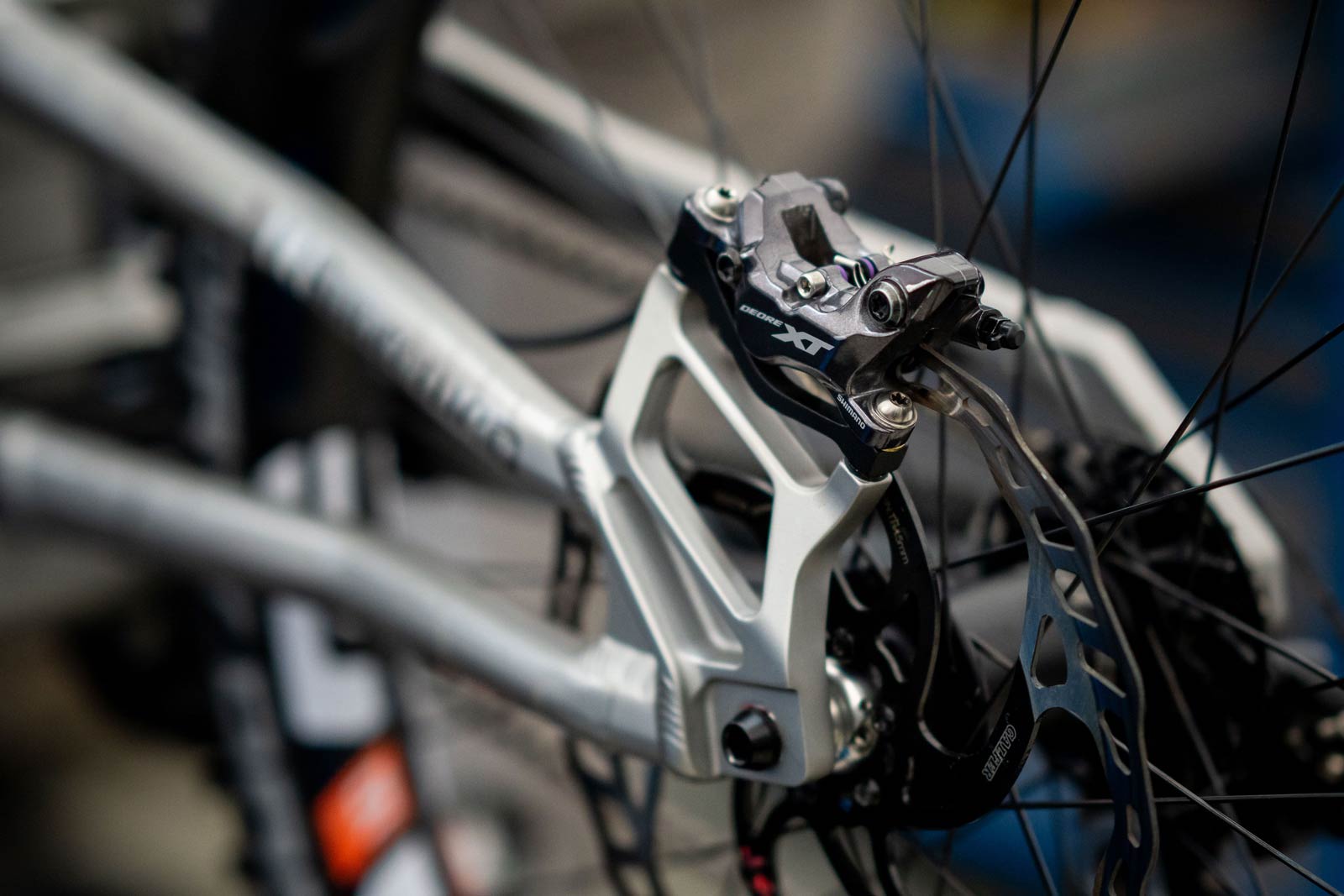 Magura: I’m a promoter of the “less modulation the larger the rotor” theory and correct, you should only use the size rotor required for the scenario because a smaller rotor has more communication and more “time” within its premium operation window of the friction and heat zone, both obviously required. 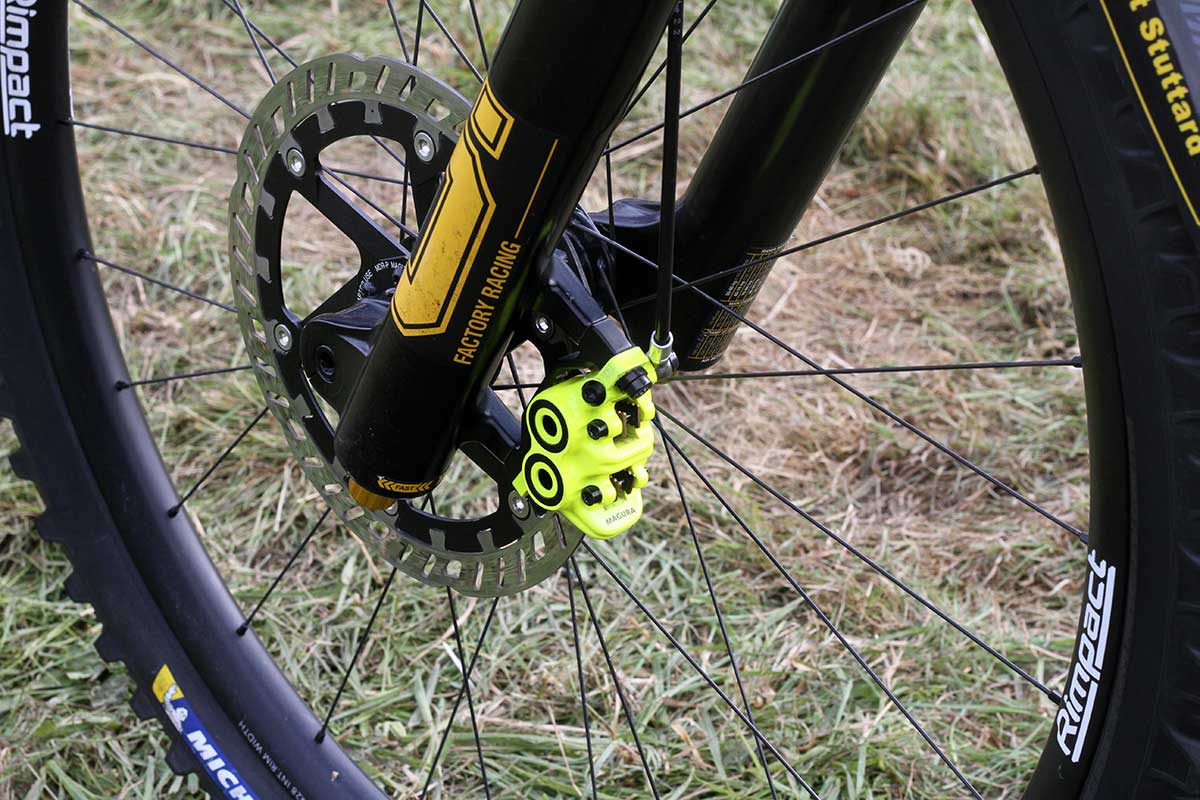 Rotor thickness plays a very large part in this equation so smaller rotors can combat heat by being thicker but extra power from a larger rotors may still be required due to weight and speed capability.

Think of a wheel hub flange located J bend versus the nipple end of the spoke. The nipple is traveling at a much higher rate of speed than the J bend yet complete wheel RPM is the same. So, not only is there more leverage with a larger rotor but there is also more speed with which the brake pads encounter the rotor surface. Why does that matter? Well, the temperature of the pads/rotor come up to optimal friction temps quicker, almost instantly, comparatively.

Think of the older days when high performance auto and moto rotors had a very wide brake track and very large caliper pistons. These have evolved into much thinner rotor brake-pad tracks and multiple, smaller caliper pistons! It is the same physics and surface area possible for clamping force but it was discovered that rotors were cracking under heavy heat loads. Radical rotor surface temperature variations and cooling over the wide pad area (i.e speed reference) affecting expansion/contraction variances are enough for tiny fractures and cracks to develop.

So, larger rotors are, by design, by need only. Needs include increases with weight, force, and speed, otherwise the most basic rotor size with proper friction should be enough power for the general target demographic. After that it becomes more specific and thankfully addressable.

Why don’t hydraulic disc brakes bleed similarly to how automotive brakes are bled? E.g., empty the reservoir, fill it with fresh fluid, then pull the lever (or brake pedal in a car) crack a bleed screw, have the fluid come through the caliper, tighten the bleed screw, then repeat until air free/clean fluid comes through. A lot easier and only requires two very cheap tools to do.

Magura: Professional automobile mechanics do not bleed brakes as described above. Admittedly, we’ve all done it that way at one time or another in an emergency or to get by but you can not charge for such work, lol! Proper automotive bleed techniques would include either a “vacuum” type or “pressure fed” type, both include proper attachments and specific pressure instructions.

In addition, you actually can do the same thing with a mountain bike brake if you could work out of a master cylinder with the old school removable top cap; it is no different there. The BIG difference lies in the fact that cycling hydraulic brake systems have internal i.d or internal diameters for fluid passage near the 1.5mm to 1.9mm ID. For cars and motos, this is in the range of 4mm, making the two systems very different for dislodging and evacuating lodged or stuck air. The smaller i.d produces a much higher pressure system so there is a need for much more precision when dealing with internal lodged air.

Galfer: The bicycle bleeding system is very similar to the automotive/motorcycle on many brands but thought to be cleaner. Note that oil is spilled when the bladder is assembled on a motorcycle. For a Japanese brand, the procedure is the same as you describe, but it uses an additional reservoir to make the process cleaner. Others uses syringes to remove the old oil and bubbles quickly.

What’s the relevance of the hose diameter and material when it comes to braking performance? Are there marginal gains to be had by upgrading this component?

Magura: Outer diameter is mainly a protective concern for frame fitment but internal diameter physics would state the pressure producing side of the equation. MC’s “the master piston diameter” and receiving end of the pressure “caliper’s pistons total surface area” are a constant… if you unknowingly change from a 1.5mm i.d. to a 1.6mm i.d, over the length of that line (50 plus inches for a rear brake) the variation becomes exponential and therefore more overall pressure is exerted on the line’s total internal surface area increase versus sending that input to the receiving end, “the caliper piston’s surface area”, because the line is slightly bulging. 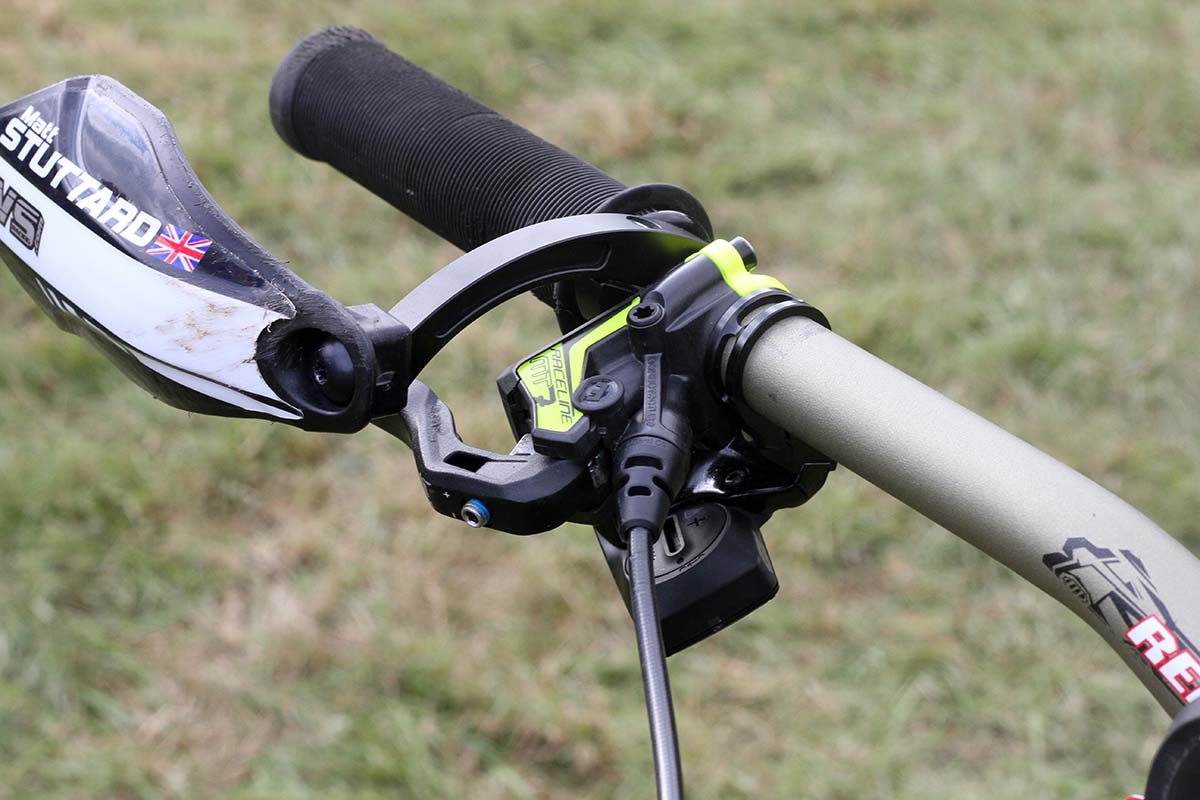 Galfer: It effects on the stiffness under pressure and temperature. On longer hoses (rear brake) stiffness is much more important because the volume inside the hose is much increased. Keep in mind that feeling is not the same on right and left lever. Using a stiffer hose on the rear brake, could help to get the same consistency on both brakes.

I really enjoyed this version of AASQ.