The rest of the frame is carbon fiber, and it’s still handmade in Denver, CO. That means it’s not only the first US-made carbon e-gravel bike, it’s also available with full custom geometry and paint. 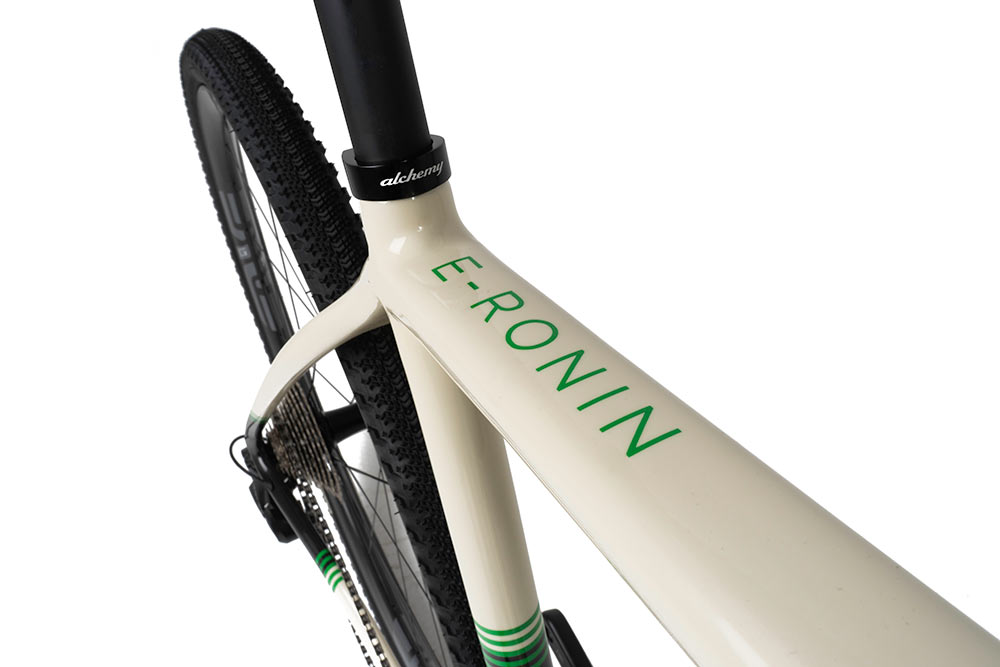 The carbon frame mirrors much of the original Ronin’s shaping and features. Shy of the oversized downtube and BB junction, it looks just like their regular gravel bike. There are two water bottle bosses inside the front triangle, and bento-box mounts on the top tube. The stock frame comes in two colorways, with stock 52/54/56/58/61 sizes available. Limited color and paint customization is included in the prices. Add $1,000 each for custom geometry and full custom paint. Just FYI, these prices are $2,000 more than the standard Ronin, so that’s what an e-bike system adds (in this case, anyway).

Why an e-gravel bike? Why Fazua? Alchemy’s Matt Maczuzak says he wanted this bike to allow him to explore farther, hitting the gravel roads that sit outside Denver’s ever growing metropolis. Their headquarters sits along the Cherry Creek bike path, which connects to many miles of great paths heading into and out of town. Which is awesome, but it means a lot of miles before getting to the good stuff, too.

Matt said this gives him more range, and when the assist isn’t needed (or the battery runs out), there’s zero drag on the system from the motor. Same for when you exceed the maximum assist speed. And if you need or want a regular ride, just leave the battery at home and you (mostly) have a regular gravel bike with only the small motor’s added weight. They chose the Fazua Evation system because the complete kit adds just 4.6kg (10.14lb). Yes, adding 10 pounds to your bike sounds like a lot, but compared to most other drive systems, it’s quite light. Its form factor is also small, letting them easily build it into an almost-normal looking down tube…and keep the chainstays at the same 425mm as the standard Ronin. Despite similarities to that analog model, this bike was built from the ground around the Fazua Evation system.

It has 60NM torque and uses a 250WH battery. Three levels of assist let you balance power versus battery life, and the battery drops out completely when not needed. Or if you want to bring a spare.

What about riding without a battery?

The bikes ship with a tube-and-cap cover plate system, allowing the battery compartment to be used for storage and still look good. As in, there won’t be a gaping hole in the downtube if you’re riding sans battery. The battery-and-motor unit weighs 3.3kg (7.25lb), and the replacement cap-tube weighs about a pound. So riding without the battery and motor brings the bike down to an almost-normal 21-22lbs. The BB’s gear box remains in place, but they say there’s no noticeable drag.

Neat. But still waiting on a self-driving bike. No rider needed

Most fit road bike riders usually don’t have any problem going over 20 MPH. So why would they want to lug around 10 or more extra pounds, especially in a discipline that counts every ounce or gram. In USA, the assisted e-bike limit is 28 MPH, do that and it makes more sense.

Don’t forget about mountains. In some places you are either climbing or bombing. But in flat places, I agree.

NIce to see Alchemy offering a Pro-Tour ready bike.
Do they offer it in traditional Team Sky livery ?

I’d be interested in a road bike that had a lower maximum torque (if that would allow for a lighter motor), and the weight savings there put in to a bigger battery. As a relatively fit rider I don’t need 60nm of torque but would like more battery range.

Fazua has a video on their website instructing users to clean the Drivepack periodically. Is that to say that water can pool at the bottom near the motor and BB?