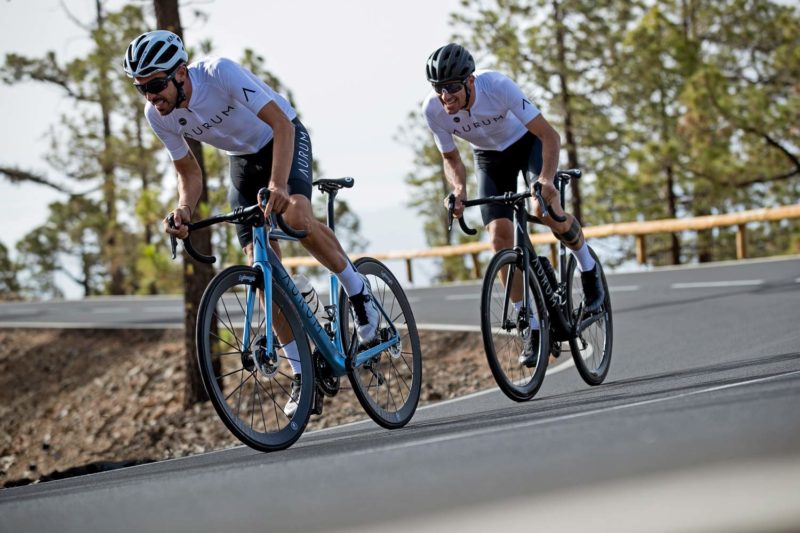 Starting with the idea of a race-ready climber’s bike and adapting it into an endurance all-rounder, the Aurum Magma looks to mix the light weight and comfort of modern disc brake road bikes, with a touch of the neat integration of recent aero road bikes. 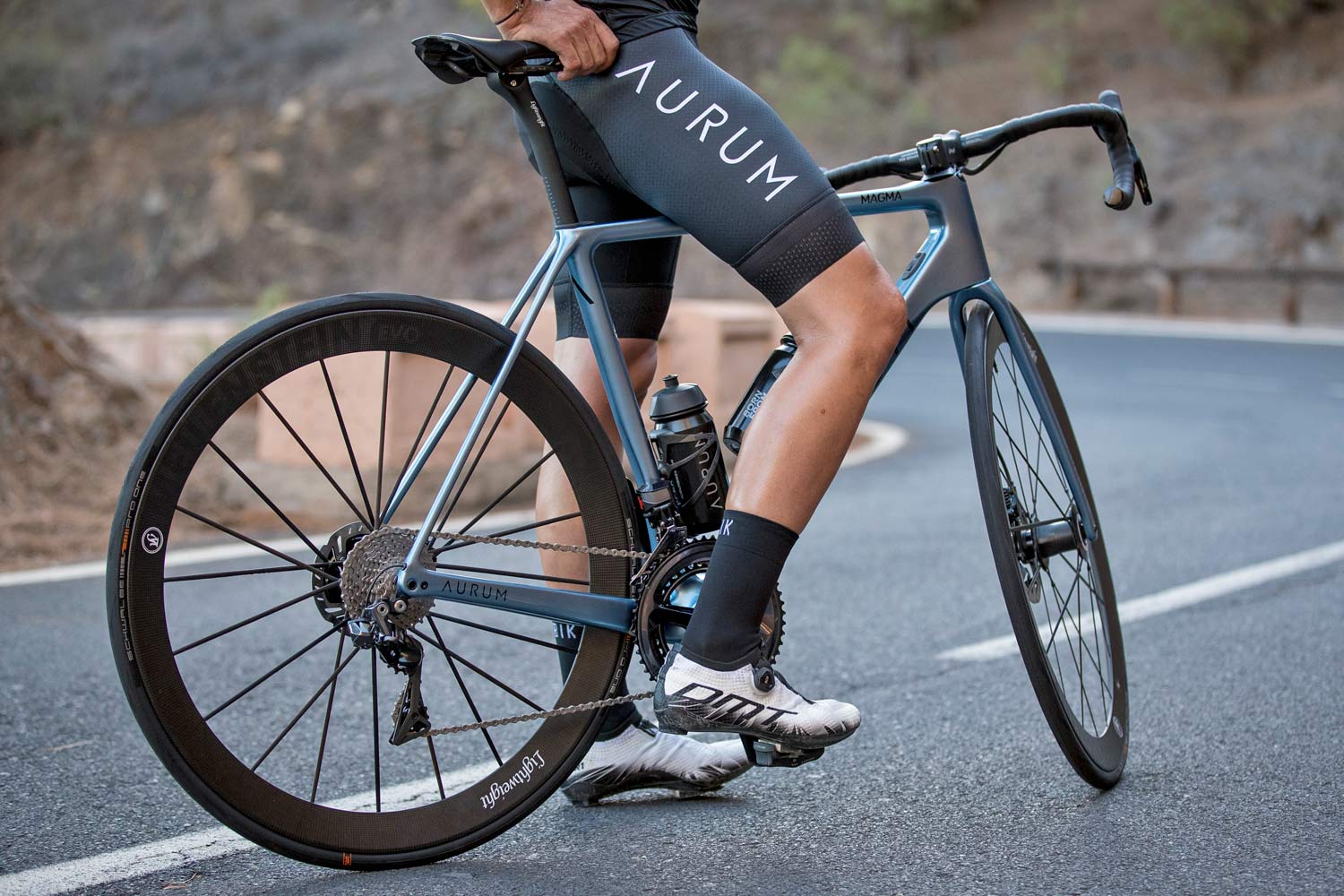 With inspiration as a climber’s bike, since that’s where the two most often excelled, the Magma set out to hit four targets: stiffness, comfort, aerodynamics & light weight. 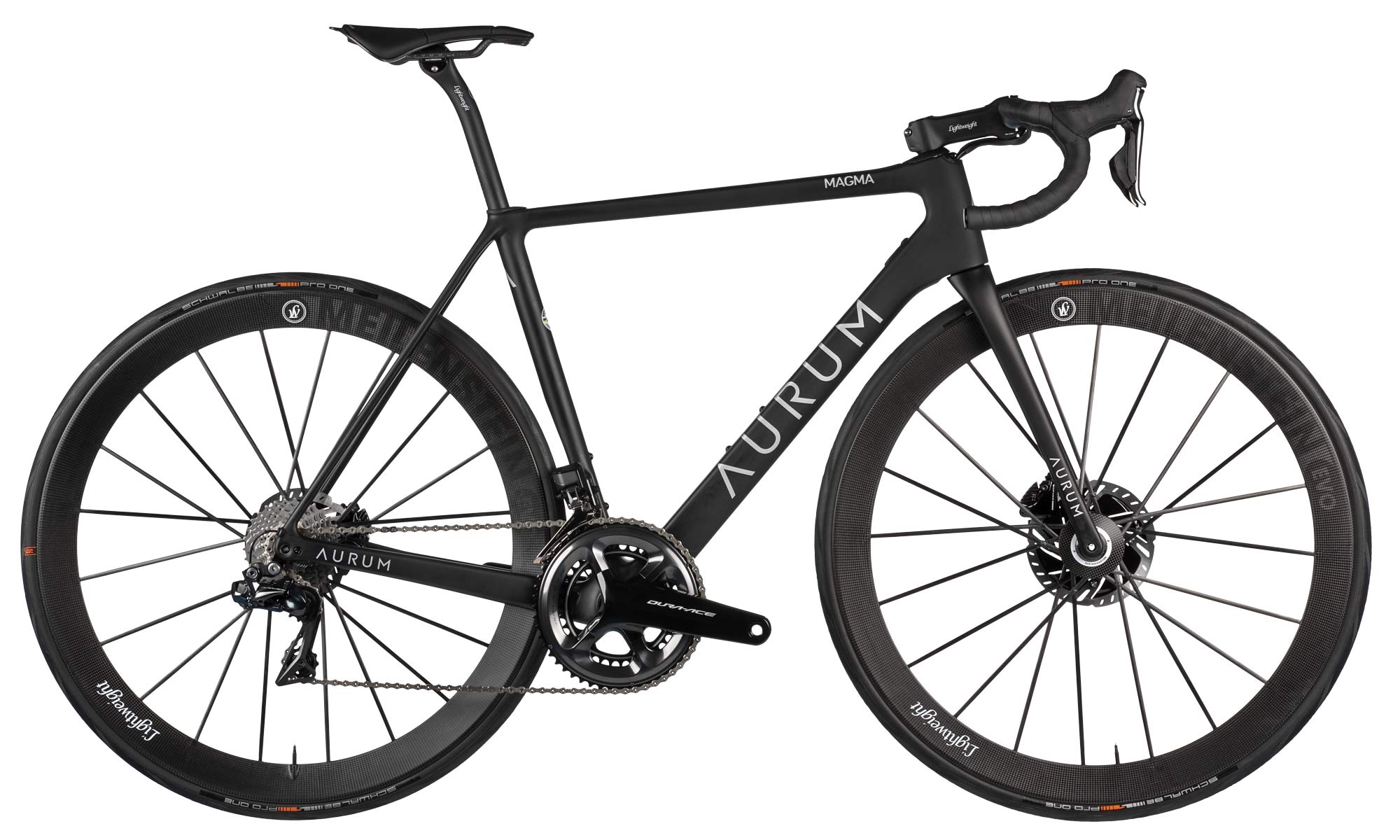 But in reality, race-ready geometry was supposedly their starting point, as these ex-pro wanted to be sure that all riders would benefit from the same balanced handling characteristics. 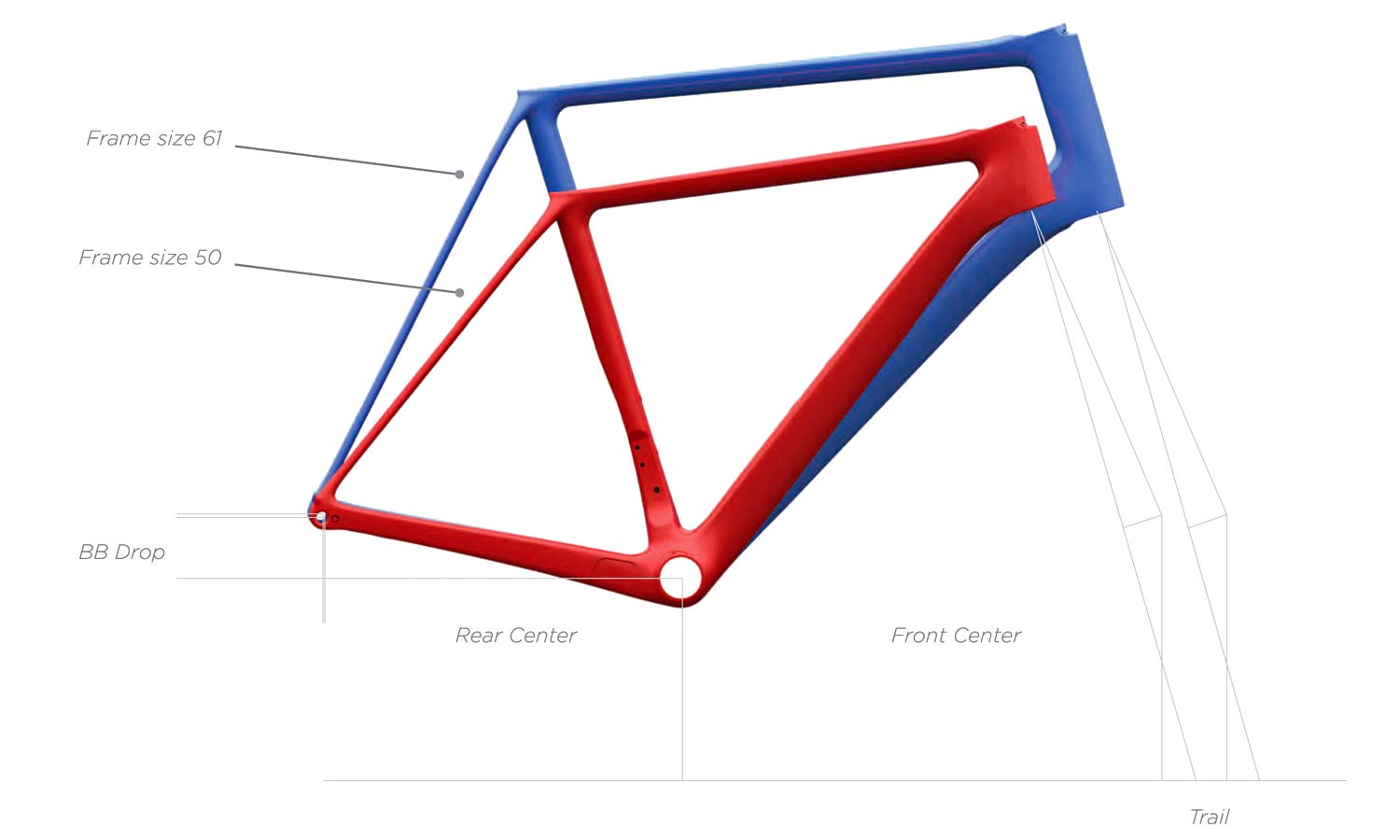 As is typically the case, geometry was developed starting with the middle 54cm & 56cm sizes that Contador & Basso ride. But instead of just scaling that up, Aurum focused on getting the same 59mm trail figure across all six sizes (defined by frame stack: 50-61cm) based on 25-28mm tires and some small adjustment to head angle. 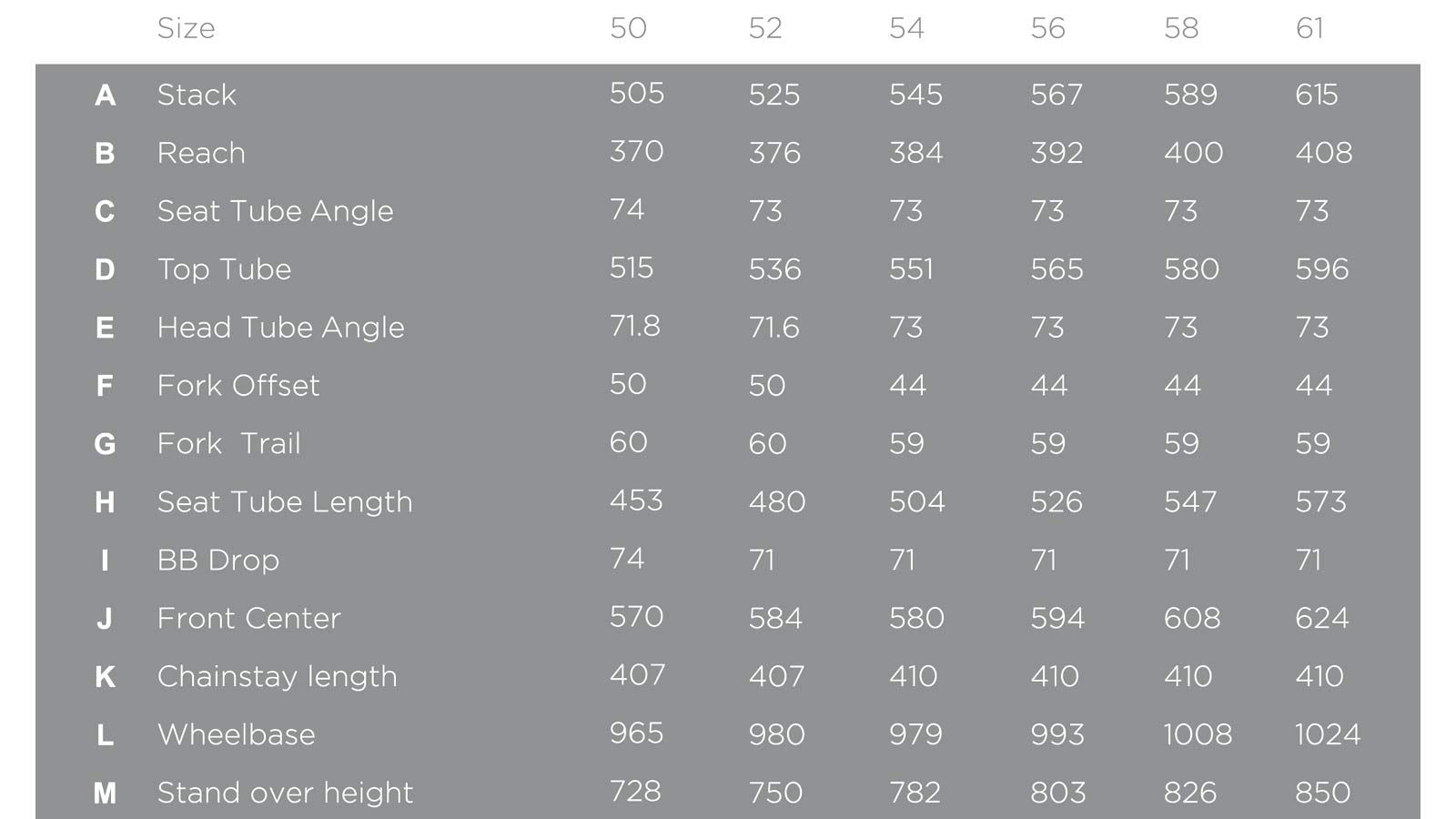 To do that the Magma gets two different fork offsets – 50mm on the smallest two frames, 44mm on the largest bikes – so everyone has similar handling. Even bottom bracket drop remains almost constant at 71mm BB drop (74mm for the smallest). 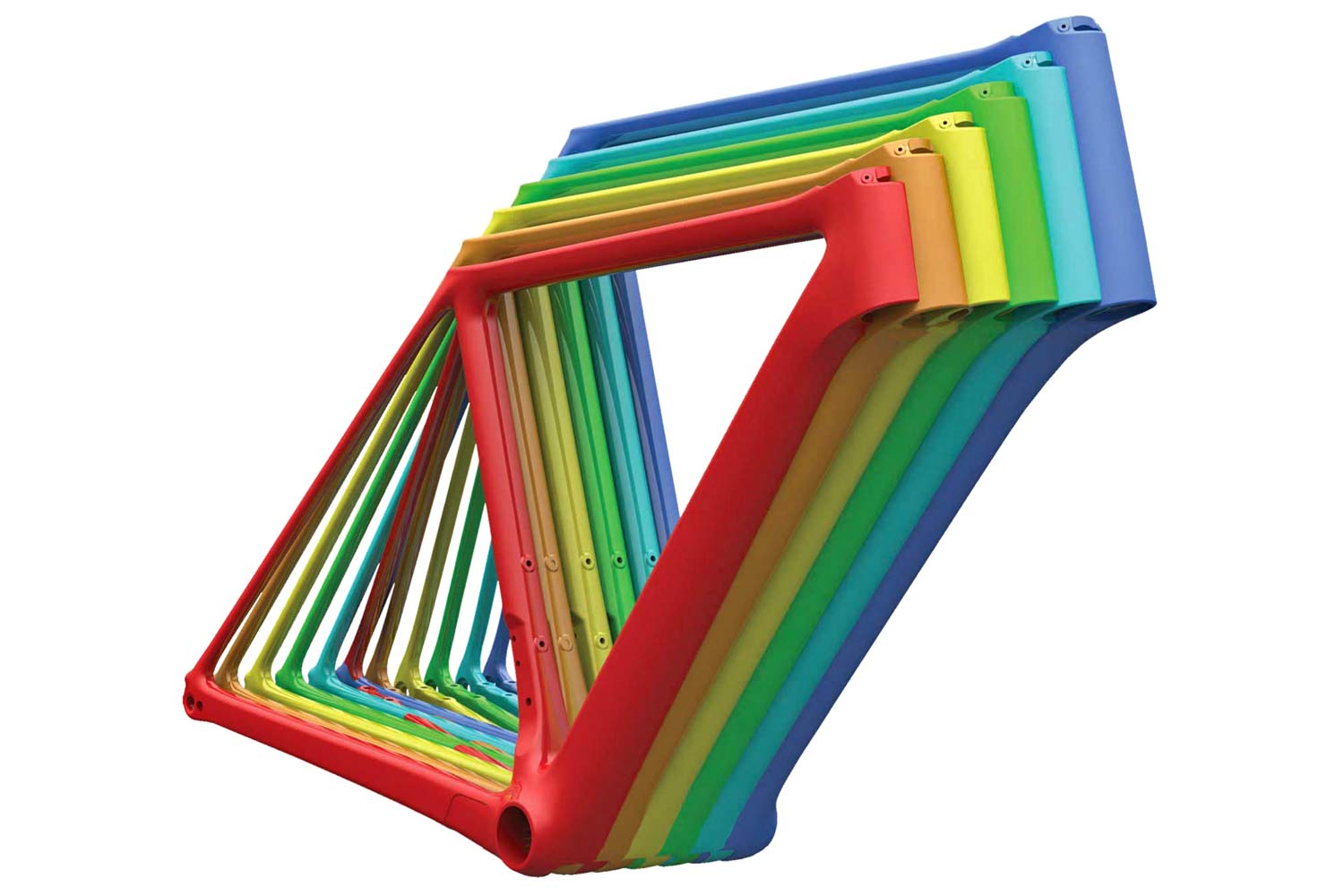 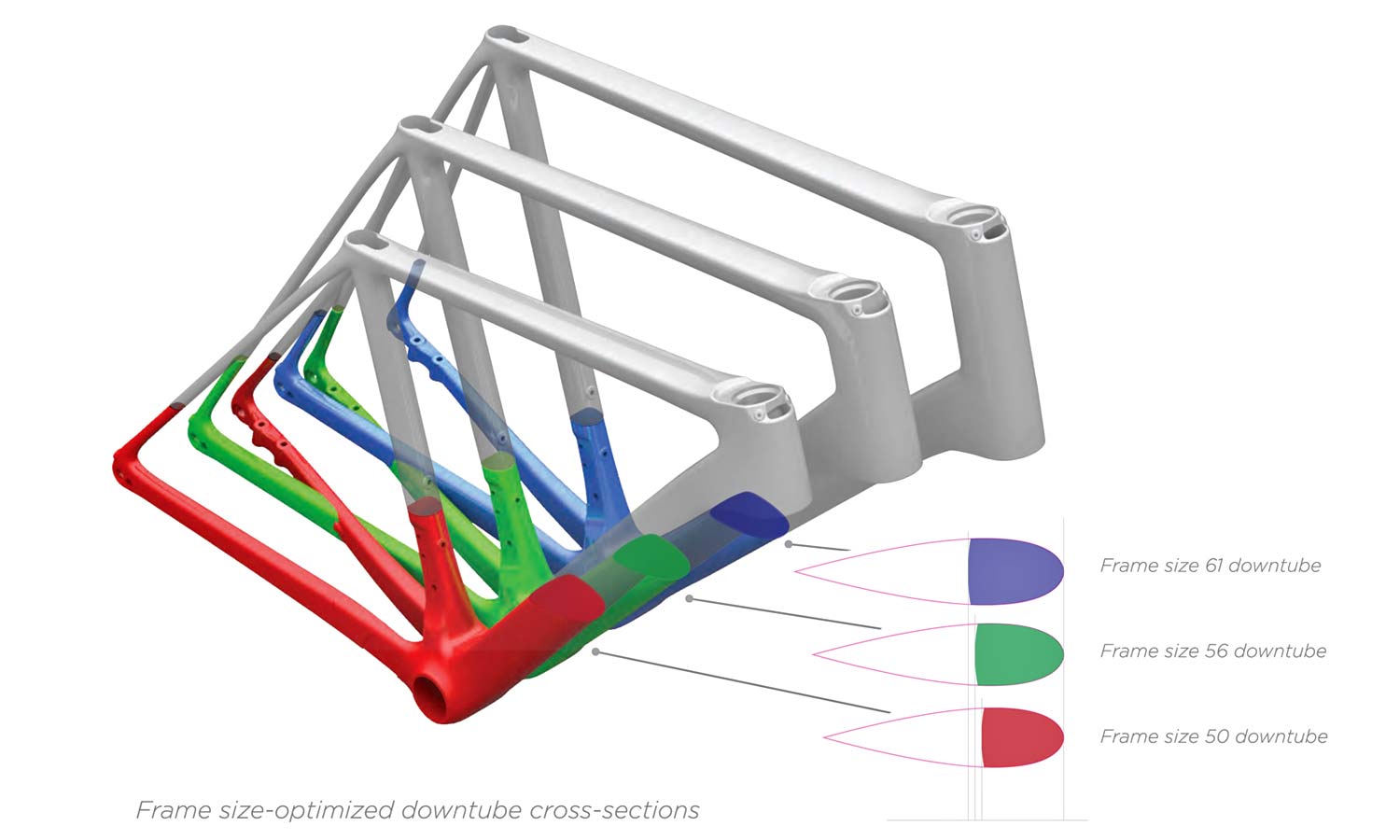 The same size-specific shape & layup play into the comfort, too. Using thin seatstays that run all the way up to the very top of the seat tube allowed for a stronger structure and longer stay length to flex. At the seat cluster, the stays do curve out a bit to add a bit of flex just before it makes it to the rider. Use of a standard 27.2mm round seatpost also allows for more rider comfort. 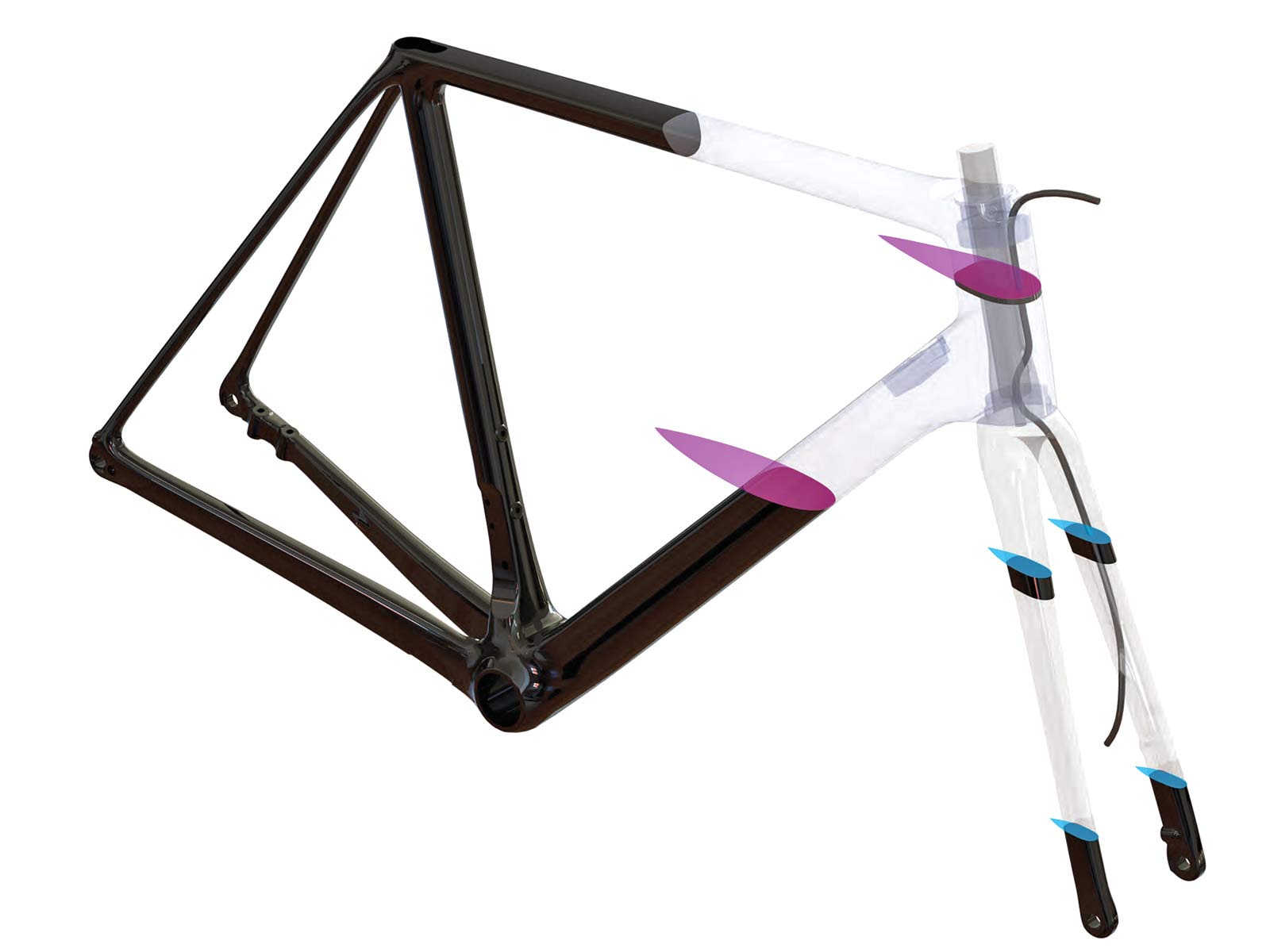 The Magma is meant to be an aero all-rounder, so utilizes NACA-aerofoil / Kamm-tail profiles in the downtube. But, since air flow becomes more disturbed from the front to the rear of the bike, Aurum focused its aerodynamic efforts mostly on the front – including the fork, headtube & downtube. The reasoning also goes that since Contador & Basso pretty much always raced on a single bike across one-day races & stage racing, they wanted more of an all-rounder, rather that prioritizing aero or lightness independently. 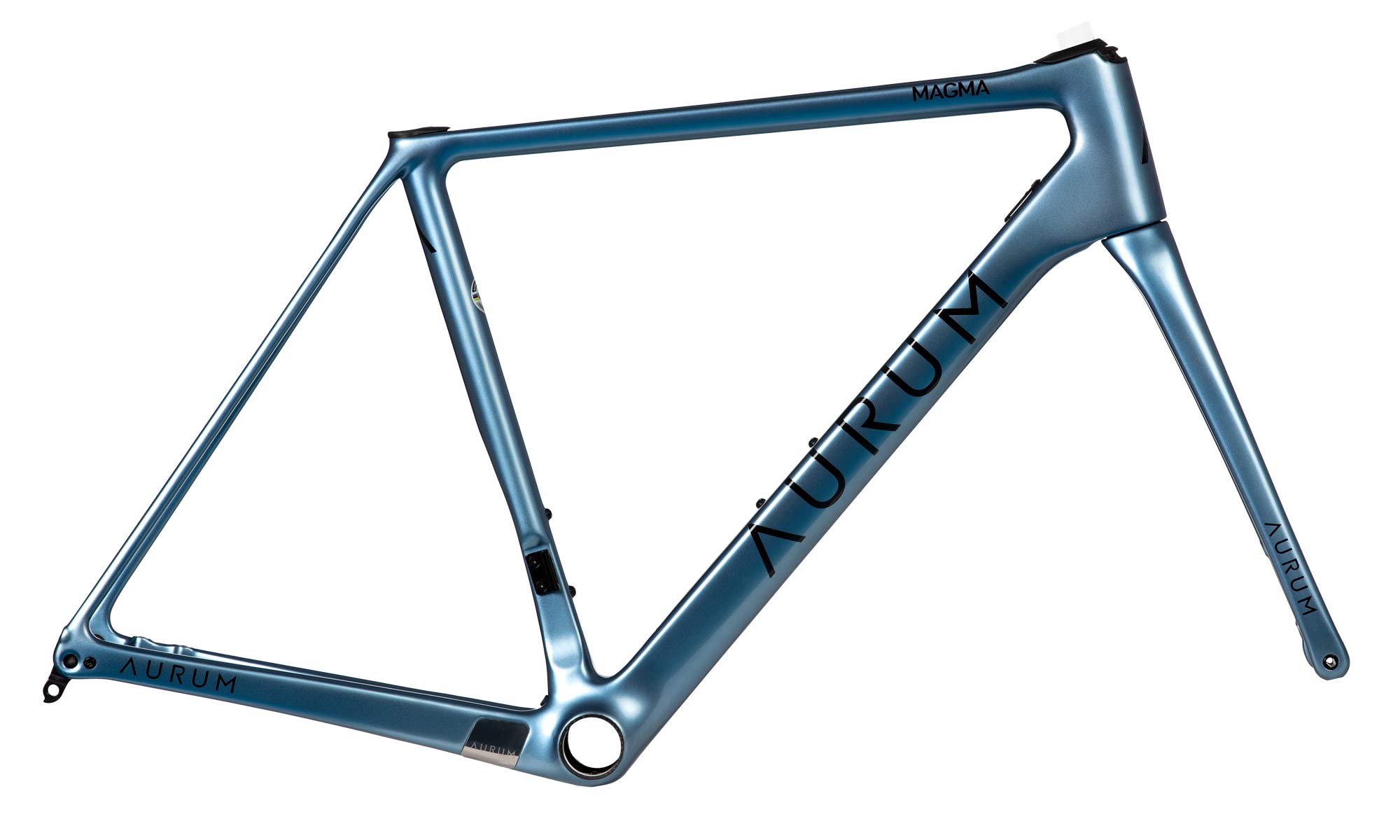 Contador & Basso explained that they didn’t want to overly focus on building an ultralight frame, especially as more and more bikes compete to be the absolute lightest. With years of elite racing behind them, they recognized that the fastest bike up the mountain isn’t always the lightest frame. With that said, the Aurum Magma is still light – with a weight of just 850g for a 56cm frame.

The Magma looks at first to have completely internal cable routing, but a closer look reveals a unique external routing port just in front of the headset at the top of the headtube – dubbed the head tunnel.

Aurum made this conscious decision to ensure the Magma will work with any handlebar and stem. Pros know that every rider is different, and often times picky about what bar & cockpit setup they prefer, so the unique design allows normal external routing across the cockpit, which allows compatibility with any standard components. It’s the most tidy external routing we’ve seen: 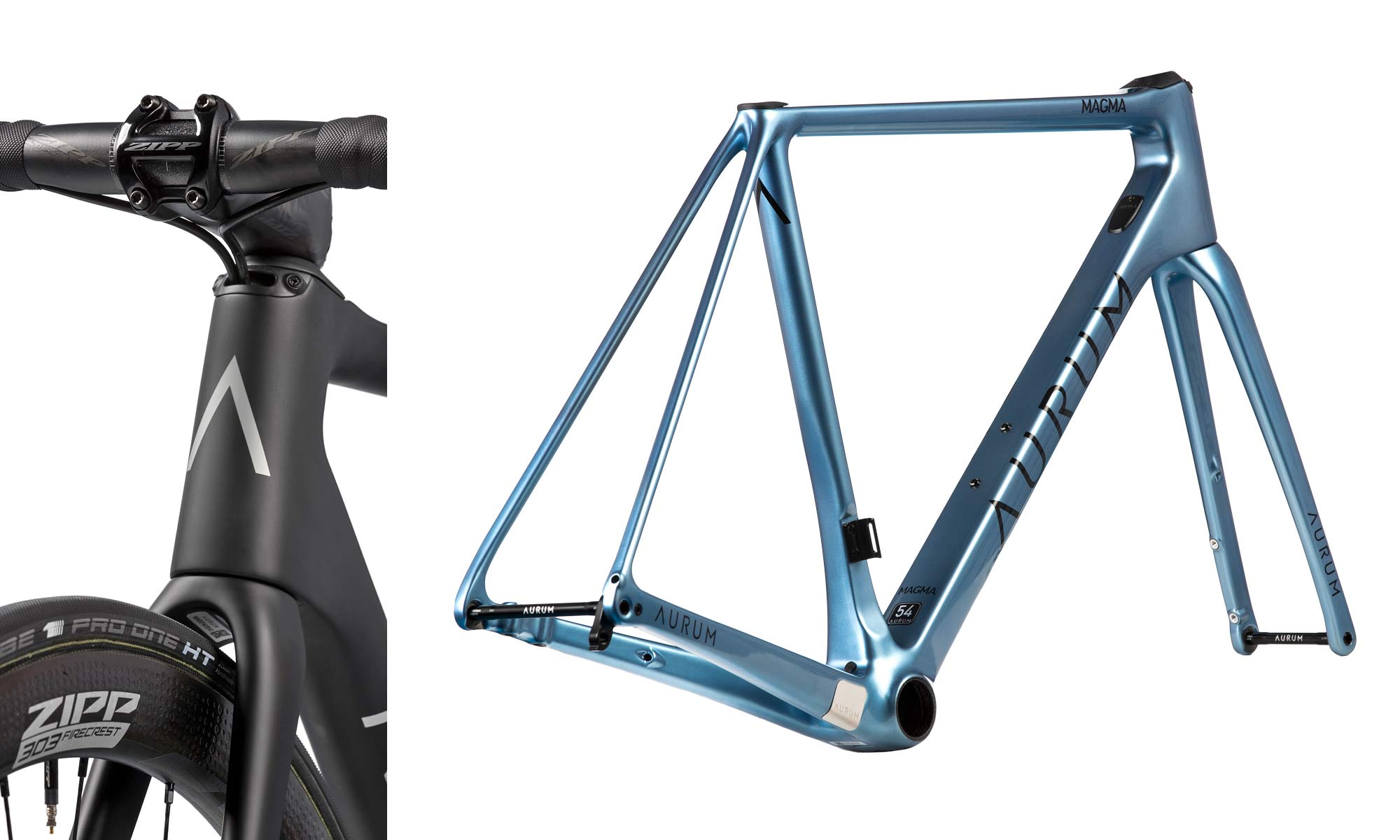 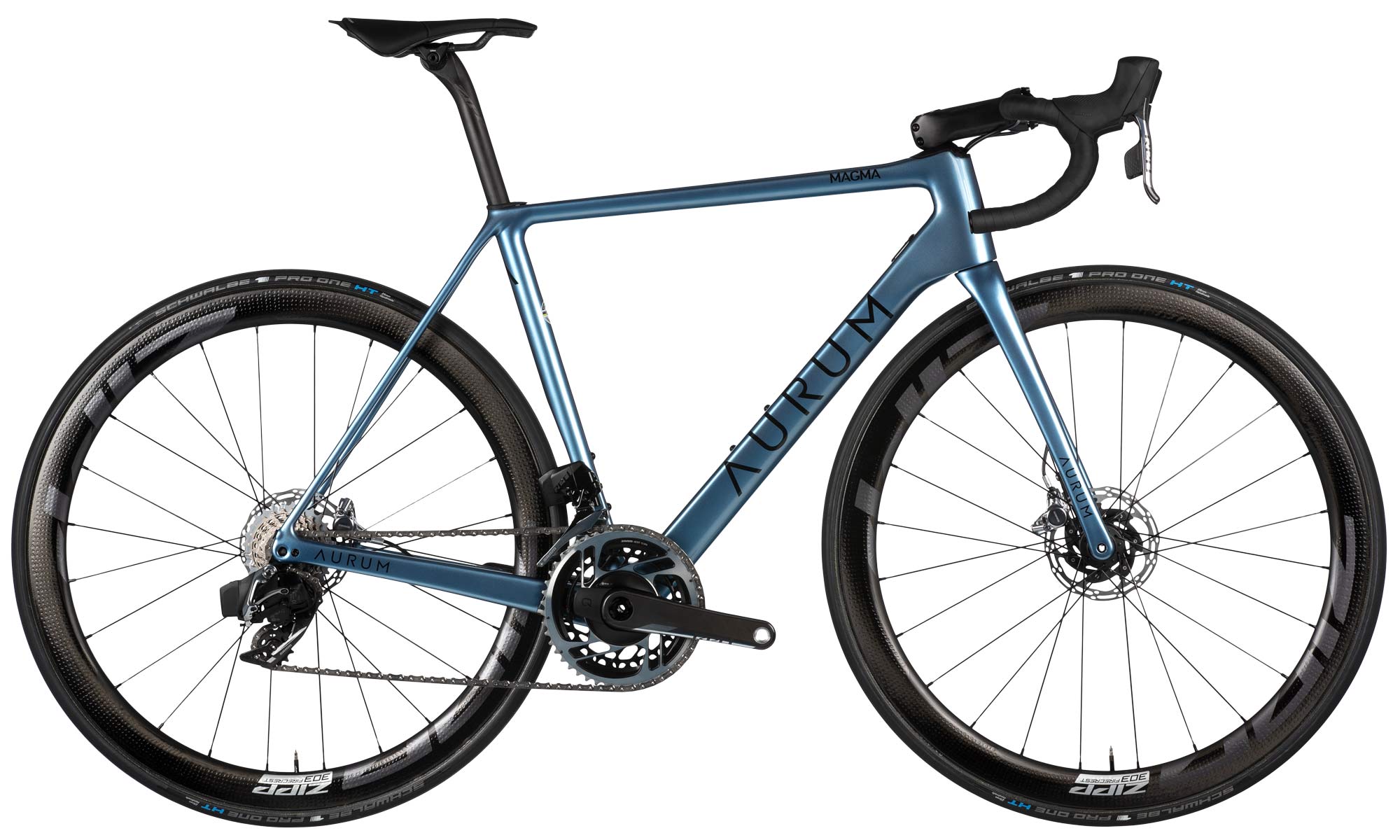 The new Aurum Magma is offered in three complete build options, focusing on premium components. Drivetrain will be either Shimano Dura-Ace or SRAM Red AXS, and wheels will go equally super high-end – either Lightweight, ENVE or Zipp carbon. Shimano/ENVE will run 9800€, Shimano/Lightweight 12,000€ & SRAM/Zipp 10,000€. 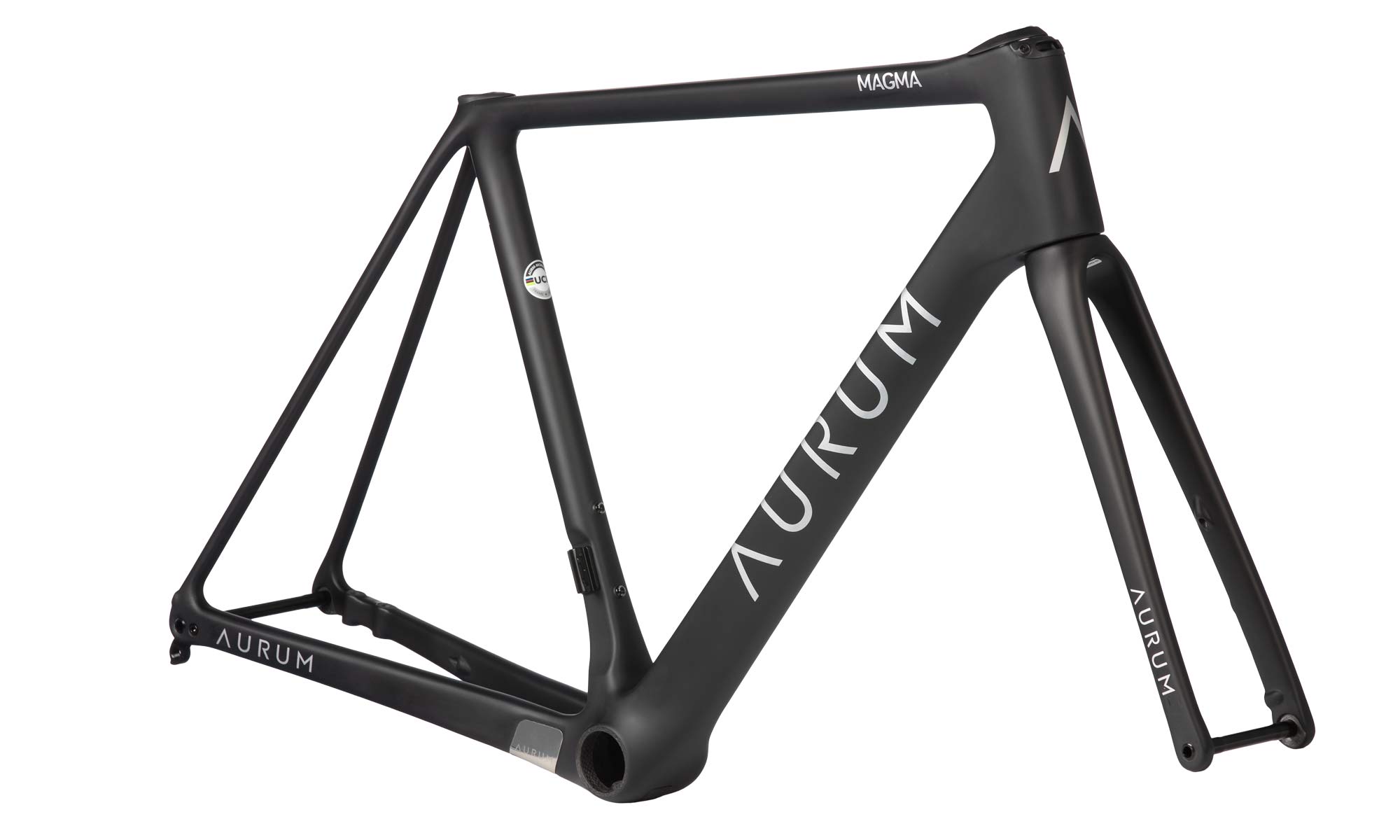 Two colors are being offered, glacial blue and black carbon – and a 4100€ frameset option will allow buyers to build their own super bike. The EU-designed, Asian-manufactured framesets also are backed by a lifetime warranty, with final bike assembly in Madrid.

The new Aurum Magma will be available on September 29, with direct online sales and in one single bike shop in Girona, Spain. On a side note… Contador has also confirmed that they are developing a super-premium gravel bike too…

“Magma set out to hit four targets: stiffness, comfort, aerodynamics & light weight.” – wow, I am glad someone finally thought of that.

So, basically you will get a bike build with a frame that is quite a bit heavier, than the established competetion, has no unique features whatsoever but is VERY expensive… with the complete bikes being even more expensive than the already extremely high asking price for the frame would suggest.

But, of course, the “colours” are “amazing”…

Why would any sane person consider buying this bike?

They know their market – I think this will do well. But they should make some more affordable options for privateers. The Euro assembly isn’t helping cost-wise.

The cable routing is a good solution to the problem. Will 4 cables fit in there for those that chose non-wireless? I would like to see a diagram.

Do you read your own words?

Sure @Gillis, but sometimes before we had enough coffee, or after we had too much. When we write, and then return after someone sends us extra info, our own words can sometimes slip past our own eyes. 😉

Those don’t look like true Kamm-tail tubes, but rather the ubiquitous “D” shaped tubes that seem to be prevalent now-a-days. Isn’t the Kamm-tail supposed to be at least 75% of the aerofoil? It seems that D-shaped tubes are less aero than round tubes, as the sudden transition to the large, flat back would cause a substantial area of low pressure (drag). Perhaps D-shaped tubes are more aero with a bottle and cage in mind? Hopefully someone with more aerodynamics experience than I can chime in and elaborate?