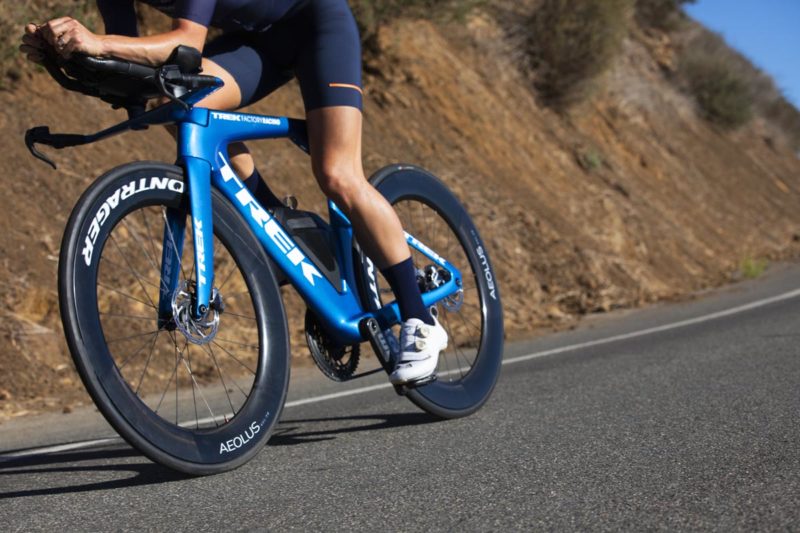 It wouldn’t be a tri bike launch without claims of improved aerodynamics. Don’t worry, Trek assures us that the new Speed Concept certainly qualifies. In fact, they say it’s the fastest bike they’ve ever tested in a wind tunnel. But there are so many other things going on with the new frame that it’s almost easy to forget that this thing will apparently save you 6 minutes over a full Ironman-distance bike leg. 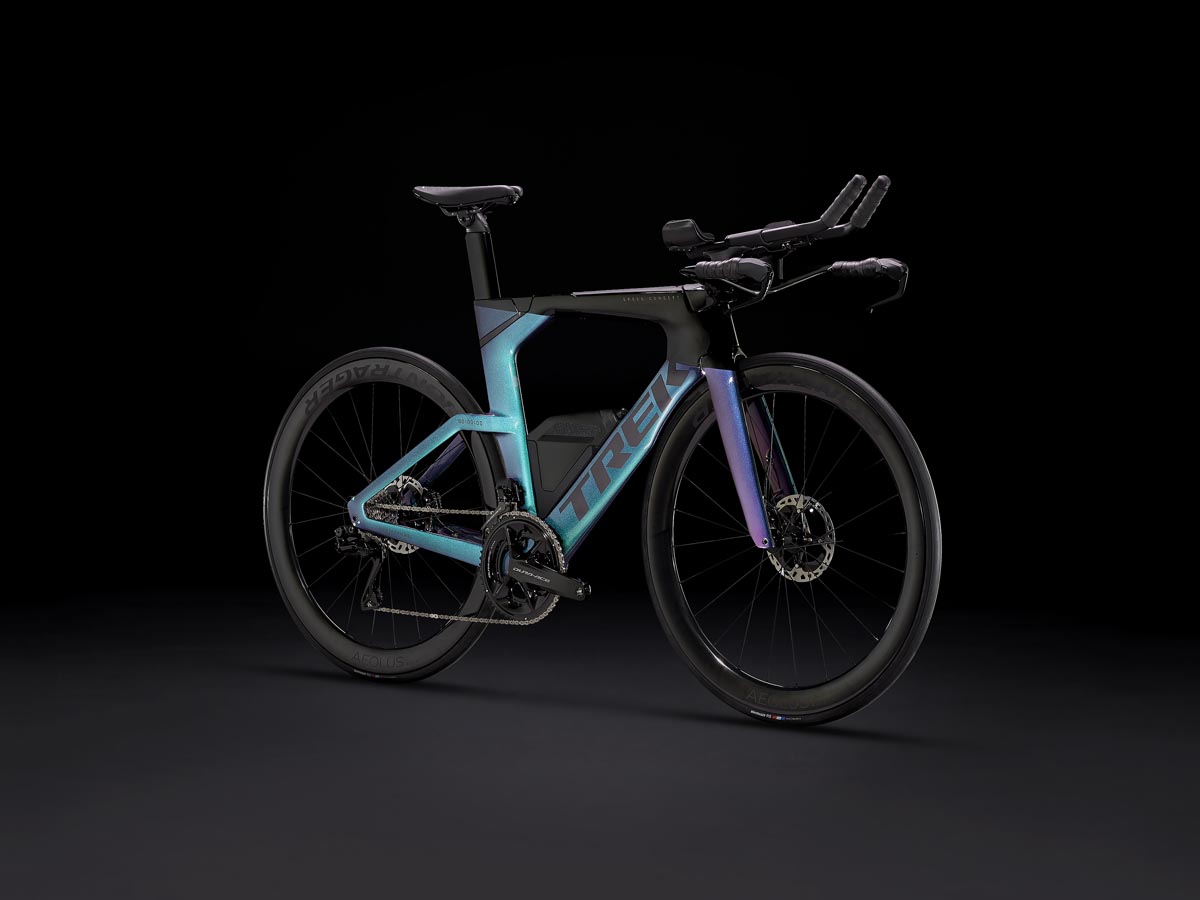 This is called the Speed Concept though, so we’ll start there. Thanks to the Trek Performance Research team and big investments like an on-premise supercomputer to run CFD simulations, Trek seems to have made big strides in terms of aerodynamics. The company claims that they run CFD simulations non-stop, which allows them to continually test for small improvements rather than having to pay someone else to run their simulations, which isn’t time or cost-effective.

The CFD testing eventually gives way to wind tunnel testing, and real-world aero testing, in which Trek discovered their new bike was 16w faster than the previous Speed Concept. That should be good for about 6 minutes based on a winning pace at Kona for a full Ironman distance bike leg. 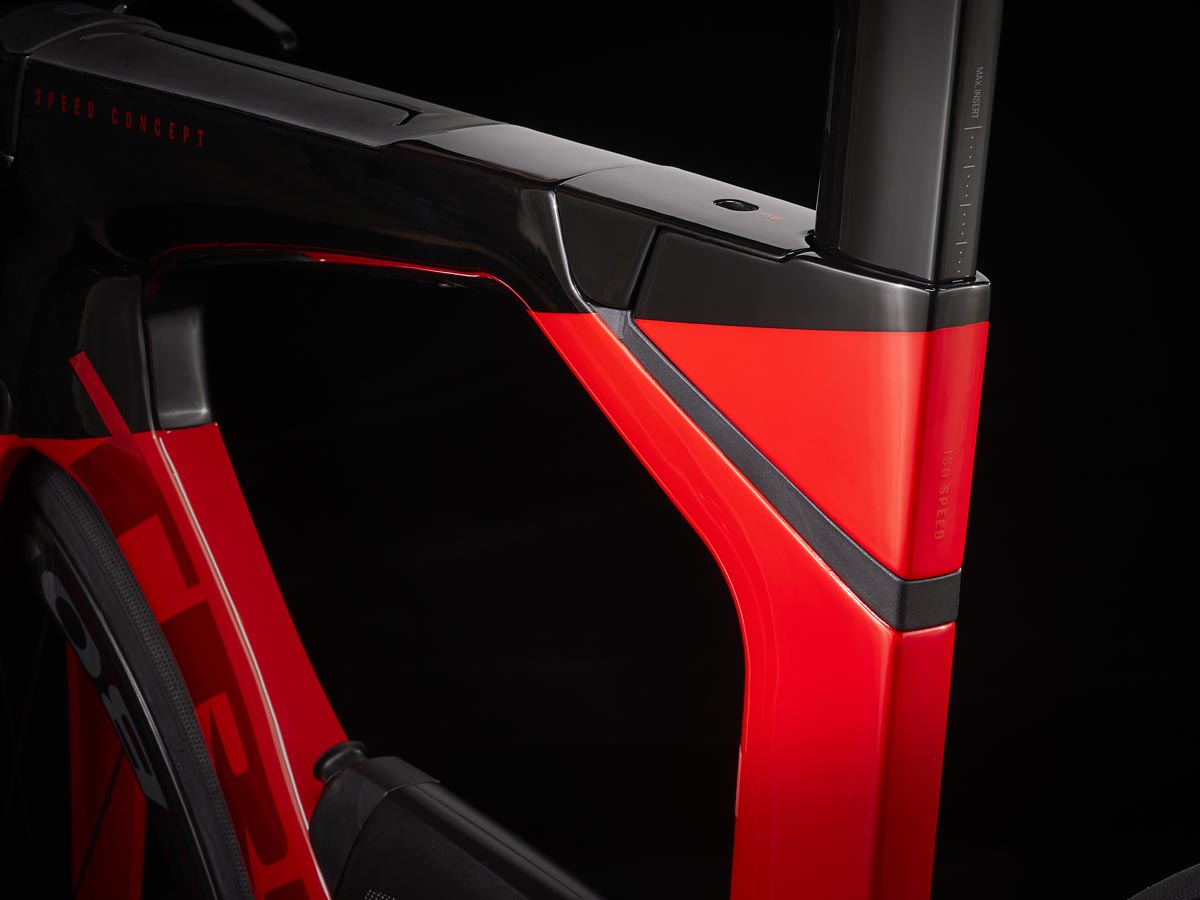 Aerodynamics are great, but not if you have to sacrifice comfort. Aerodynamic triathlon bike design often involves big sections of carbon fiber for the frame, deep-section wheels, aero seat posts—in a word, stiff. To give the Speed Concept a big leap forward in rider comfort, Trek added their proven IsoSpeed technology to the seat tube. This claims to have improved rider comfort by a whopping 30-40%. Trek says that the IsoSpeed pivot placement is farther forward to work better with the weight bias of most triathletes’ positions. 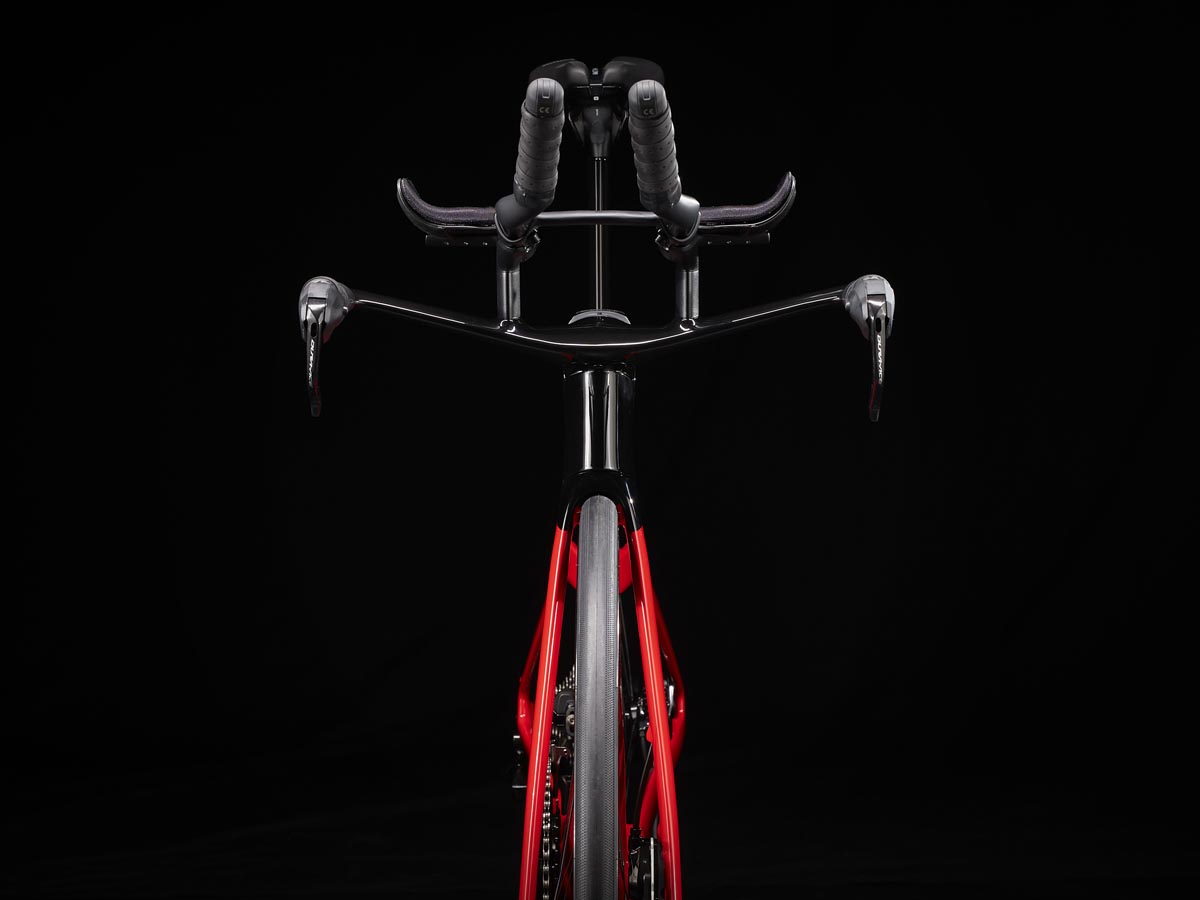 When it comes to comfort, fit is also incredibly important. So Trek created a brand new fit system to expand the fit window and make the bike easier to adjust and live with. There are three different base bars with 15mm differences in stack height and with different tower bases on top of that. Tower bases go from 0 to 75mm in 15mm increments plus there are 5mm adjustment spacers that can be put on top. The 5mm spacers have slots on the inside so you can add or remove them without re-cabling the bike. The stock extension and pad angle is set at 7°, but there is an angle adjustment spacer that can change that to 14° or 0°. That angle adjustment spacer also has a slot in it so you don’t have to recable.

The pads also have about 120mm of total adjustment side to side, plus 10° of rotation adjustment. The reach adjustments are completely through the extensions, keeping the aerodynamics intact—moving from a monoriser to the new dual-tower design was a big part of the improvement in aerodynamics, which helps make the rider more aerodynamic by channeling the air around them. 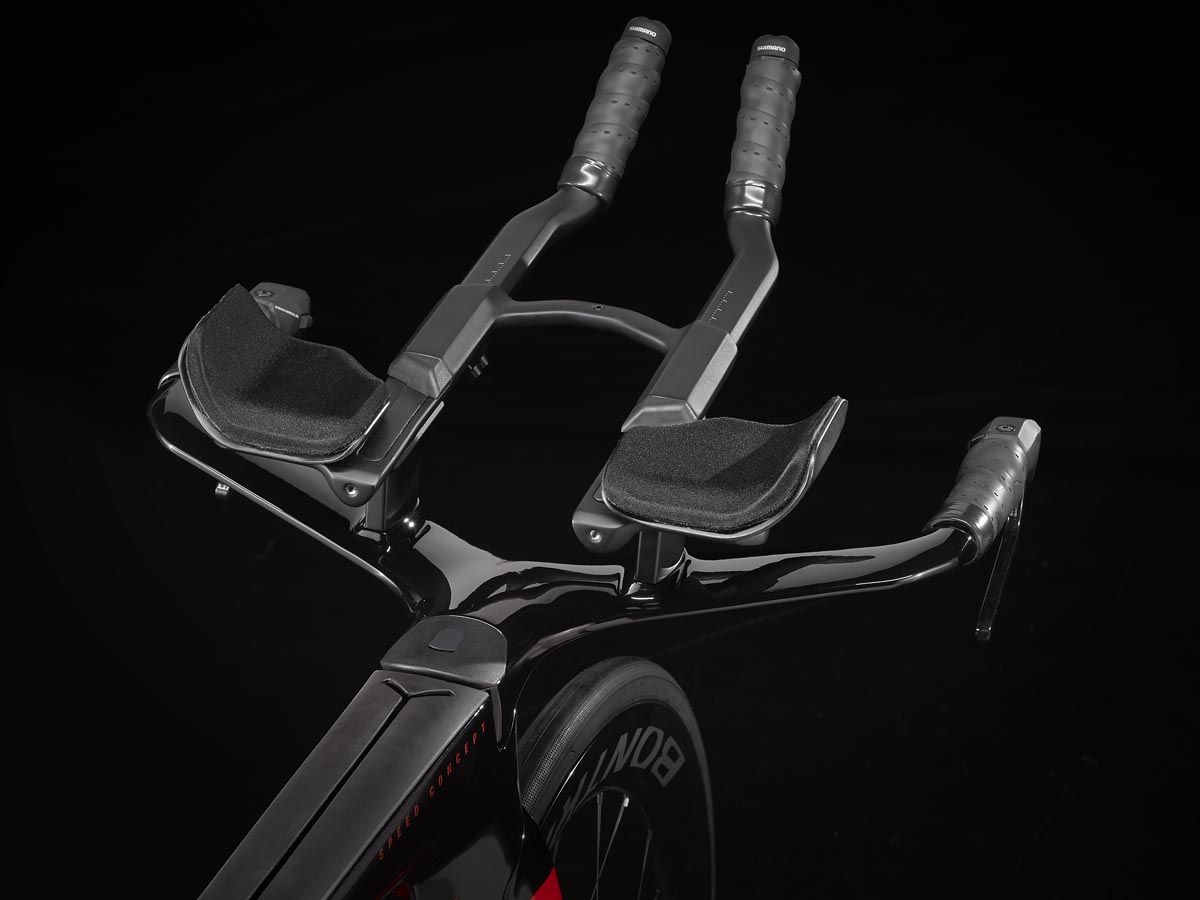 And since competing in a triathlon typically includes traveling, Trek has designed the new Speed Concept cockpit to be easily packed without affecting your fit. When traveling, you can simply pull off the base bar which preserves all of your adjustments. This is possible since the new bike uses a more traditional steerer tube arrangement instead of the integrated fork/headtube/stem on the previous bike. If your packaging requires it, the towers can also be removed using just four fasteners which also maintains your fit, just with a little more work.

What size should I get?

With all those fit options, not sure what parts you’ll need or what size? Fortunately, Trek created a fit calculator for that exact purpose. Just input your pad stack, pad reach, and your seat post height and the calculator will tell you the ideal combination of parts to start with. 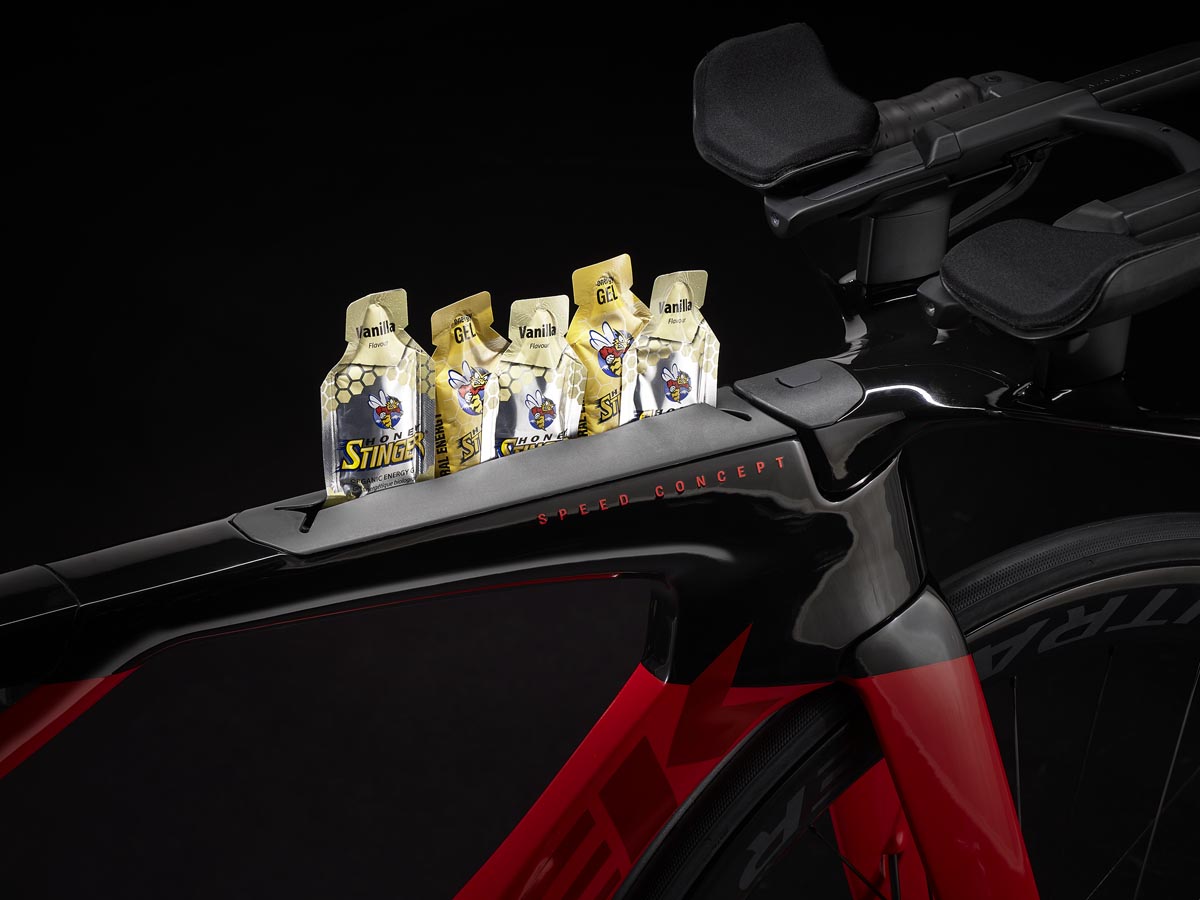 A big part of triathlon bike design is on-bike storage for nutrition, hydration, and tools. The new Speed Concept has you covered there too. For those gels, there is a removable Bento Box that’s built into the top tube instead of sitting on top. That allows you to stash the food inside without an aero penalty. But it’s also removable and dishwasher safe so you can easily hose out all the gunk after your bike leg. Included with the bike, the Bento Box can store up to eight gels. 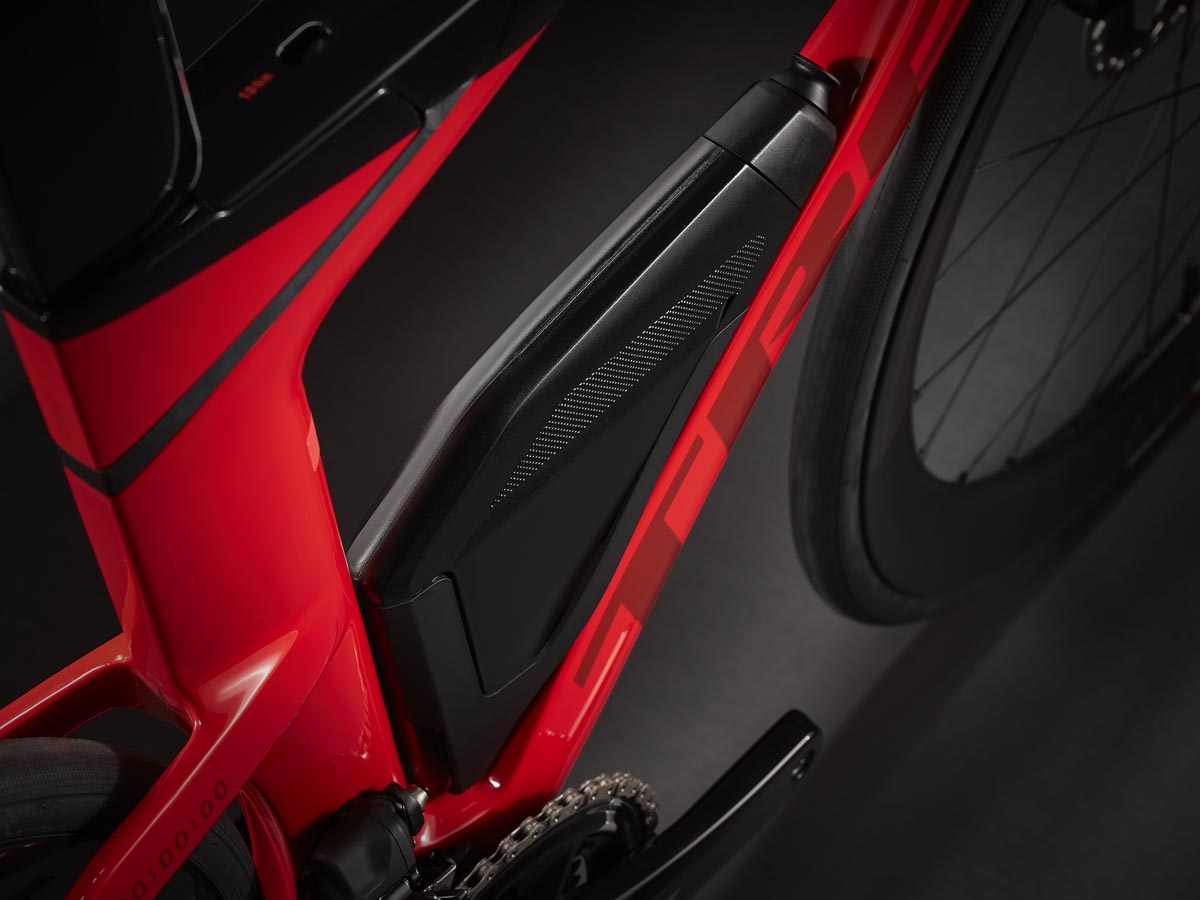 Then there’s the Aero Downtube Bottle, which again can be used without any aero penalty. The 700ml bottle is included with the bike and clips into its own bottle cage. 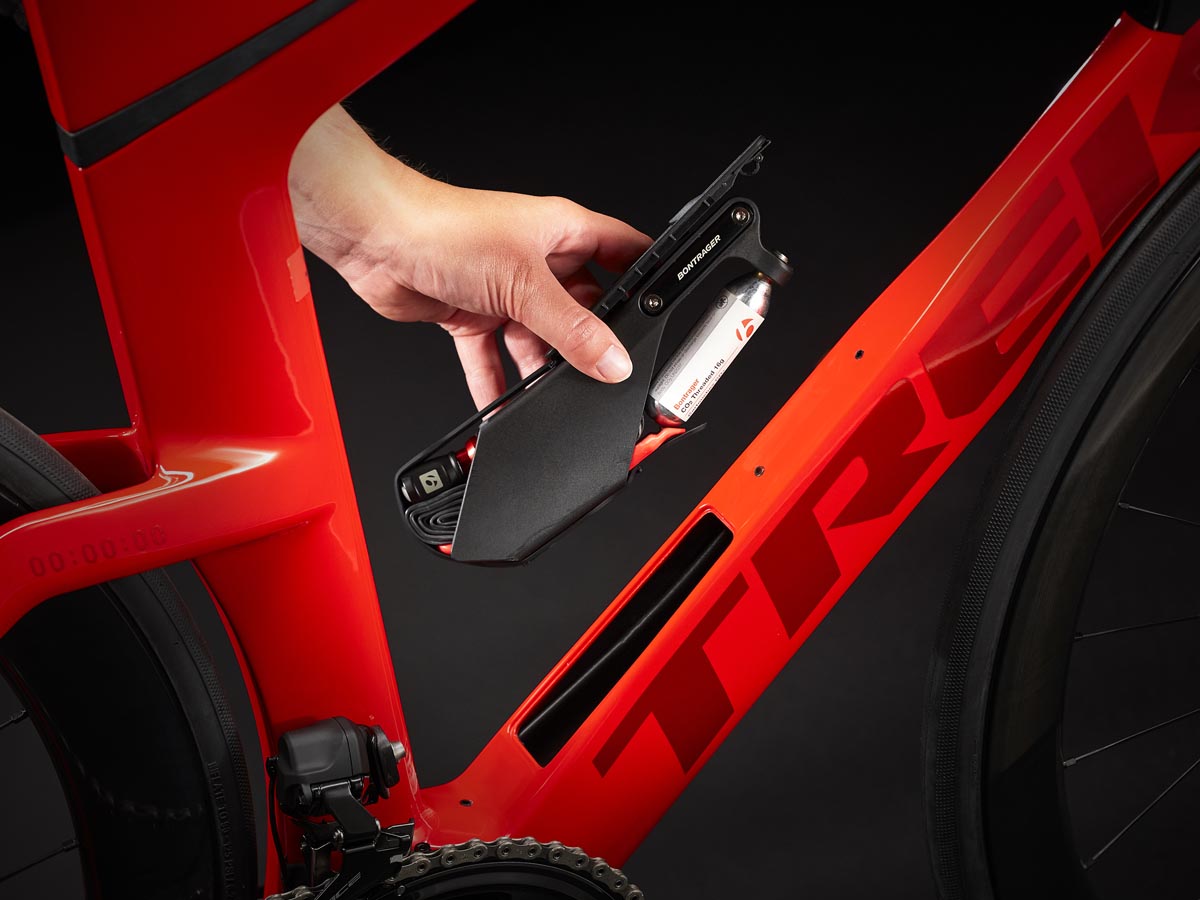 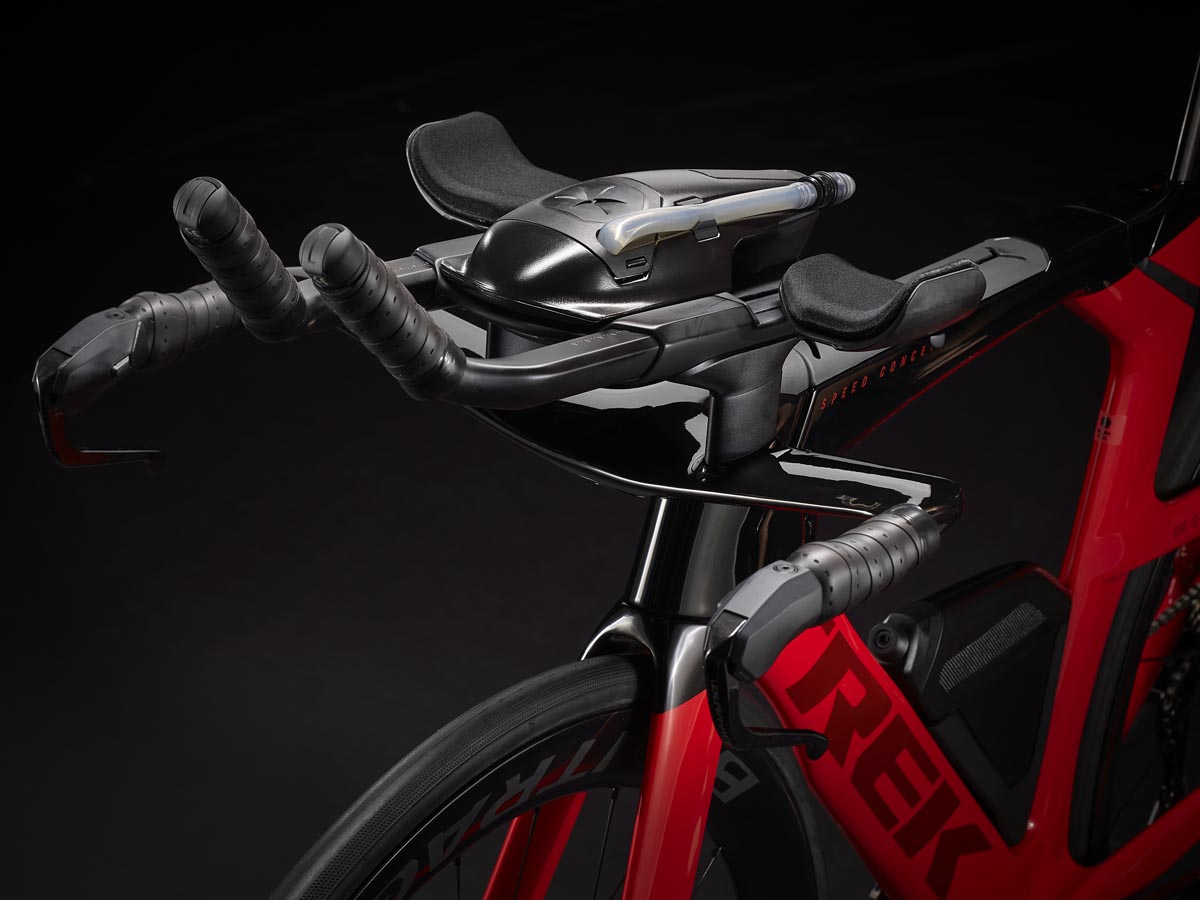 The BTA bottle will be sold separately.

To finish the hydration system, Trek will offer the BTA aerobar bottle separately. This bottle also has a 700ml capacity and stores between the arms of the aerobars. There is a hose that is accessible without leaving the aero position, helping you fast and hydrated. 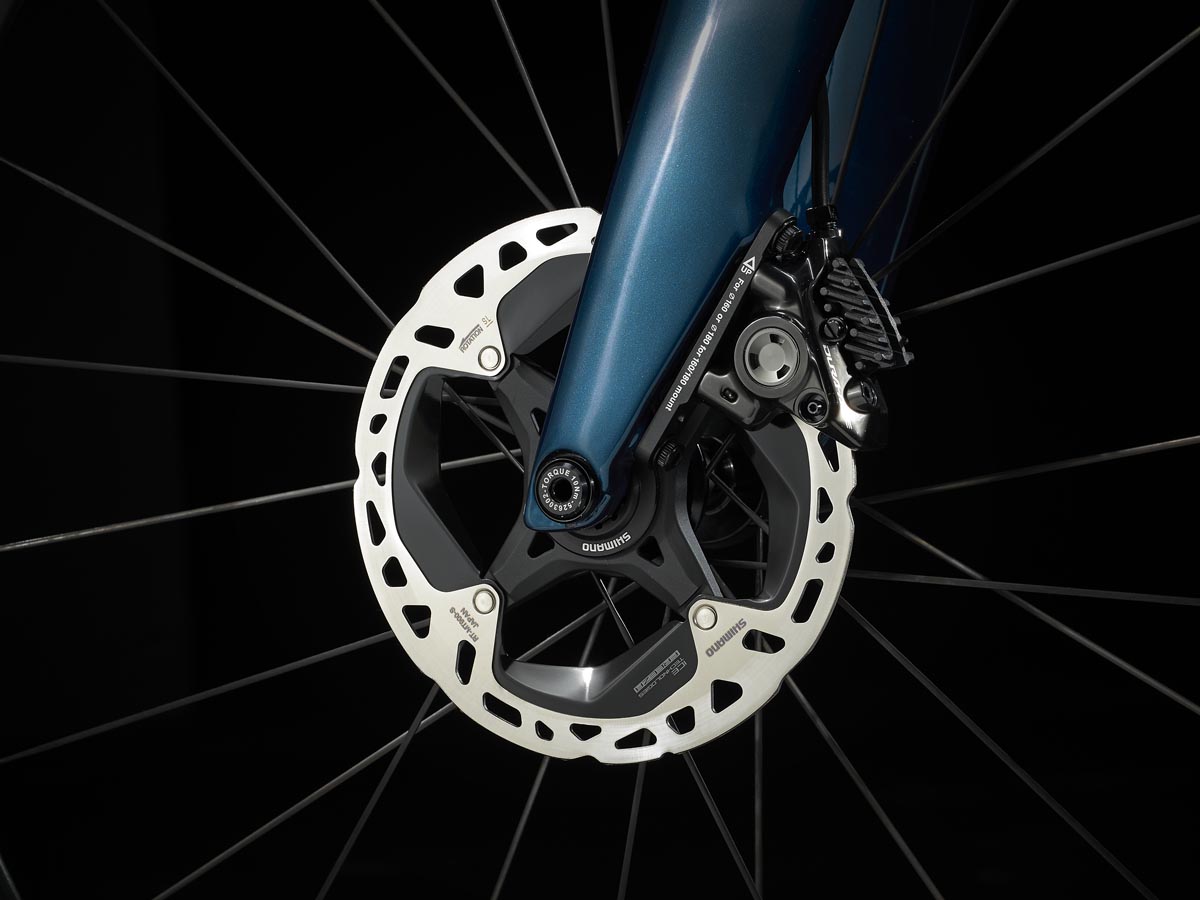 Finally, the frame makes the expected leap to disc brakes for better braking performance—but Trek’s aerodynamics team says that this also allowed them to engineer a faster bike. More importantly, even with the addition of disc brakes, a T47 bottom bracket, and all of the new features, the new frame is still weight-neutral compared to the previous version. Meaning, they didn’t add any weight to the frame, something Trek partially credits to the use of OCLV 800 carbon fiber.

Triathlon Speed Concept on the left, TT version on the right.

Not into triathlons, just all-out speed? Ther is also a Speed Concept TT which is a stripped-down version of the bike specifically for time trials without IsoSpeed, storage solutions for nutrition and hydration, or the flat kit. The TT version also has slightly different geometry, and will only be offered in S-L frames, whereas the triathlon version is offered in S-XL. The TT version will be available to consumers, but only as a frameset for $4,999.99. You’ll also be able to buy the triathlon version of the Speed Concept frame for the same $4,999.99. 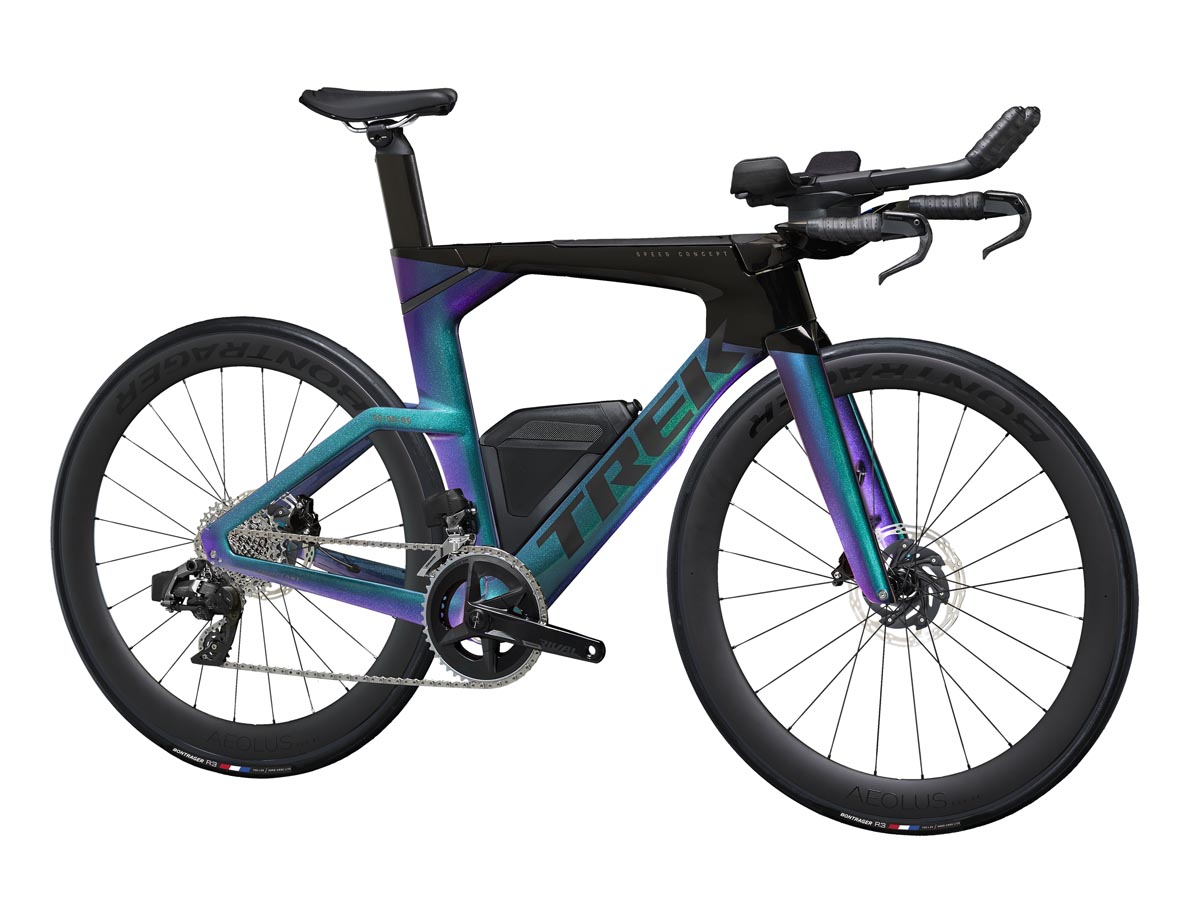 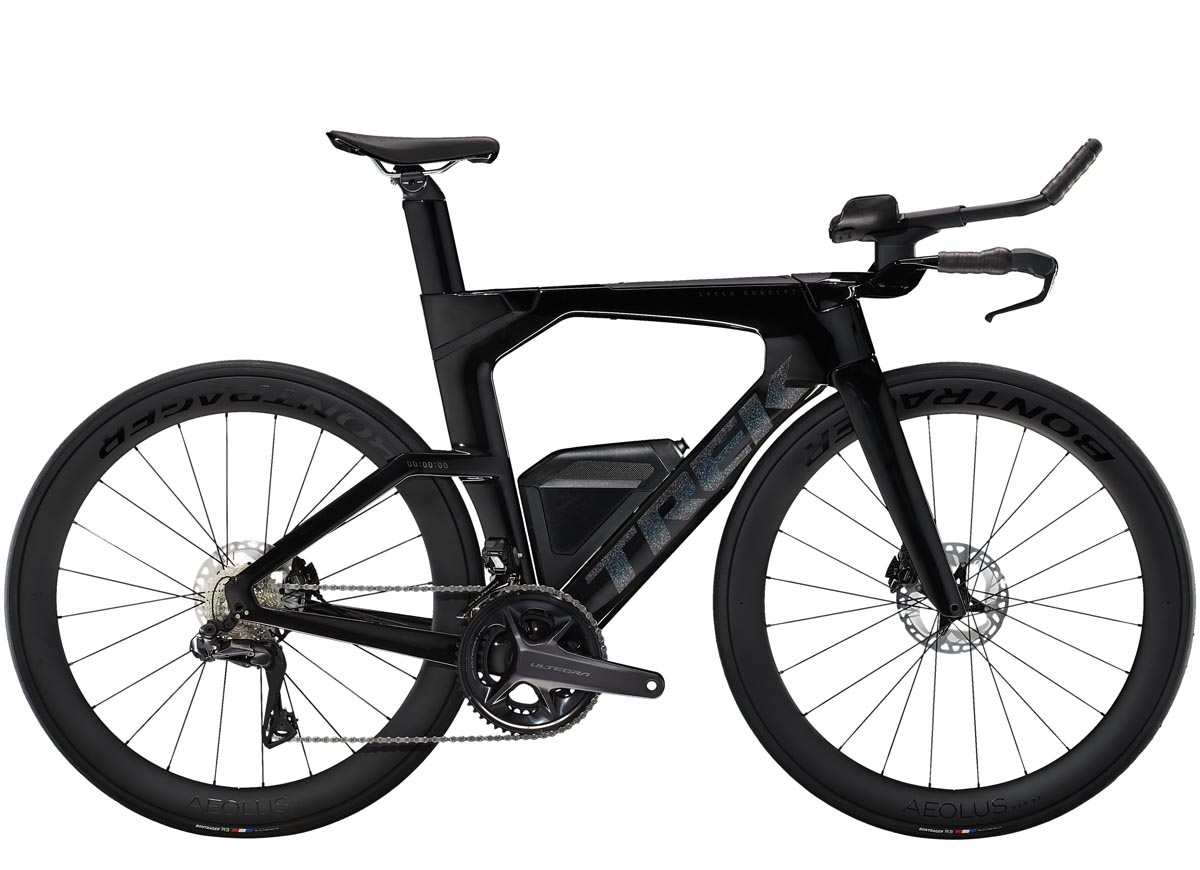 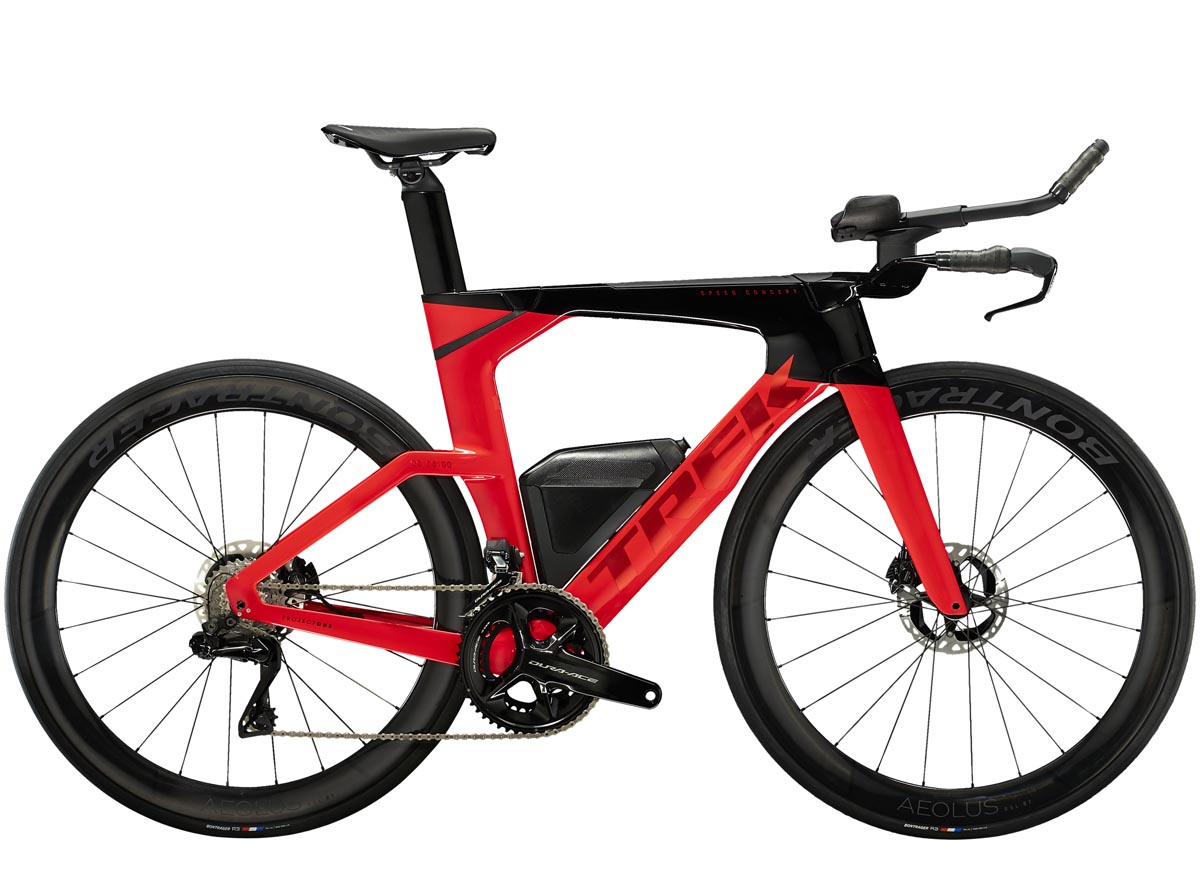 My TT is fine and i won’t change it but i would absolutely go for the Rival one. I would not care the slightest that the jockey wheel bearing are ceramic. You get the top frameset and on a TT that’s 85% of your bike, also a fine wheelset.

Zach, can you find anything on tire clearance? Will a 28 fit? Doesn’t look like it has adjustable dropouts, correct? 28s and isospeed would really help on courses like Wisconsin…