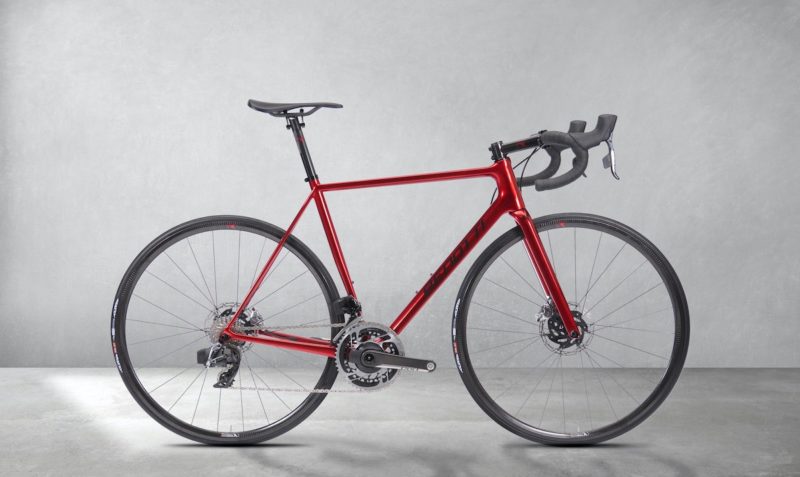 AX-Lightness Composites made headlines eight years ago with a sly reference to the performance benefits of doping when it introduced the Benotti VIAL (as in the vessel for carrying performance-enhancing substances).

The bike won a Eurobike award in 2012 and evolved into the VIAL evo D (for Germany [DE], where it was made), which won a Eurobike Gold award in 2014 for its weight and workmanship. Now AX-Lightness has announced the latest version of the VIAL, the Benotti VIAL evo Disc. 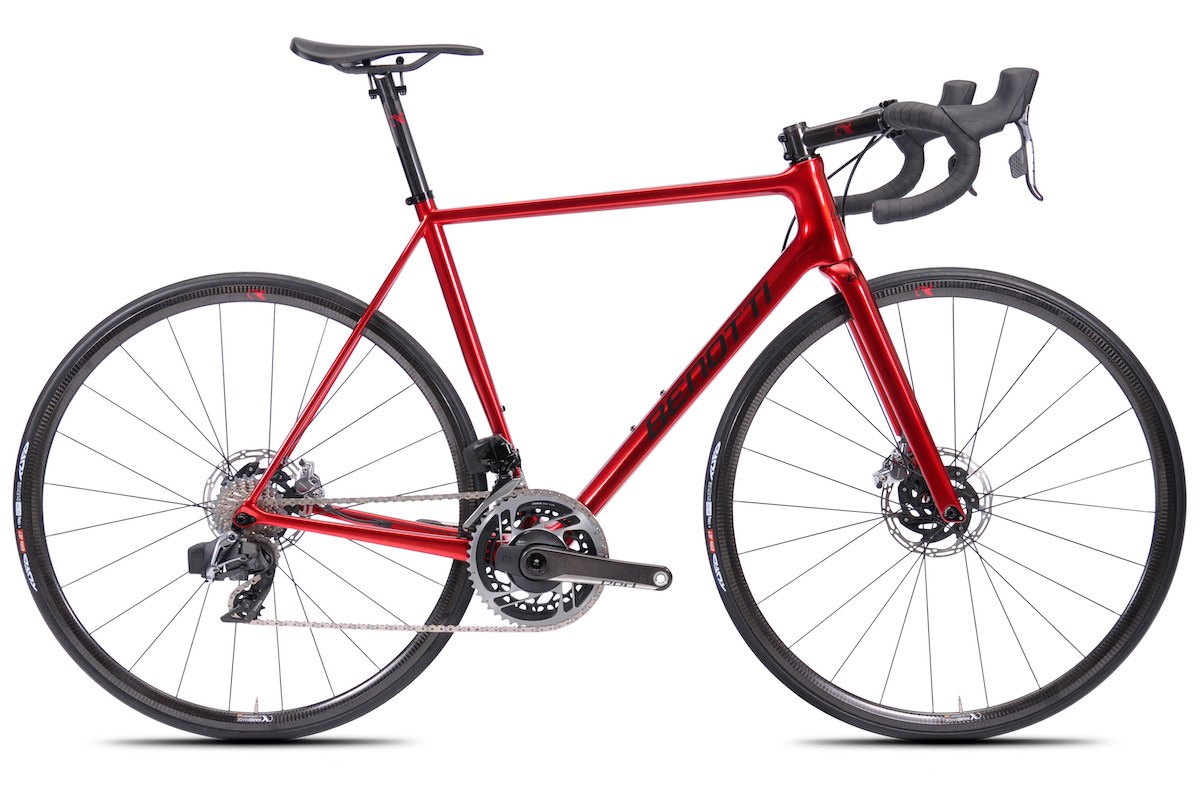 The VIAL evo Disc bike starts with a handbuilt carbon fiber frame made in Germany through a production process that begins with the same high end pre-preg carbon fiber used in motorsports and aerospace. Like most production carbon fiber frames, each one is composed of hundreds of carbon fiber pieces cut to exact specifications, then hand laid following a detailed layup schedule. As a result of building by the book, all frames are certified to meet safety test standards. 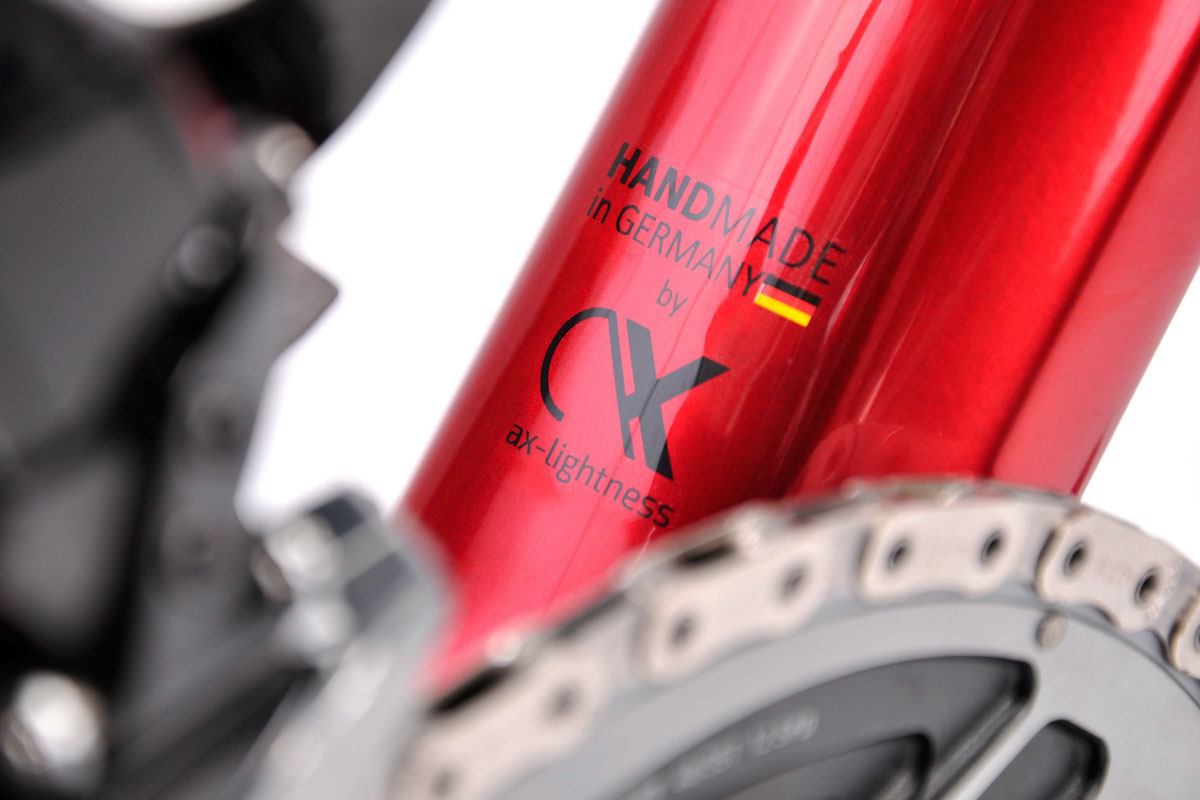 The frame has undergone independent comparative testing to yield impressive sounding numbers, like a 62% increase in lateral stiffness and a 22% increase in bottom bracket stiffness. Until you ask, “Compared to what?”

Each frame size has its own layup sequence and tube shapes designed to meet performance demands for each size. For example, it’s unlikely that a rider tipping the scale at 85kg (187lb) or more would ride a 50 cm frame (at least, not this frame), so that frame’s layup and tubes have been designed for a smaller rider.

The new frame design loses the brake bridge thanks to disc brakes and gains a newly developed AX-Lightness disc fork. The German brand forged its reputation as an OEM components supplier so it’s no surprise that the VIAL evo Disc is spec’d with as many AX-Lightness parts as possible. Wheels, stem, handlebar, seatpost, and saddle all come from the in-house brand, but lightweight wasn’t the main goal for the new disc brake bike. Instead superior strength and stiffness were prioritized over weight.

But how light can it be? 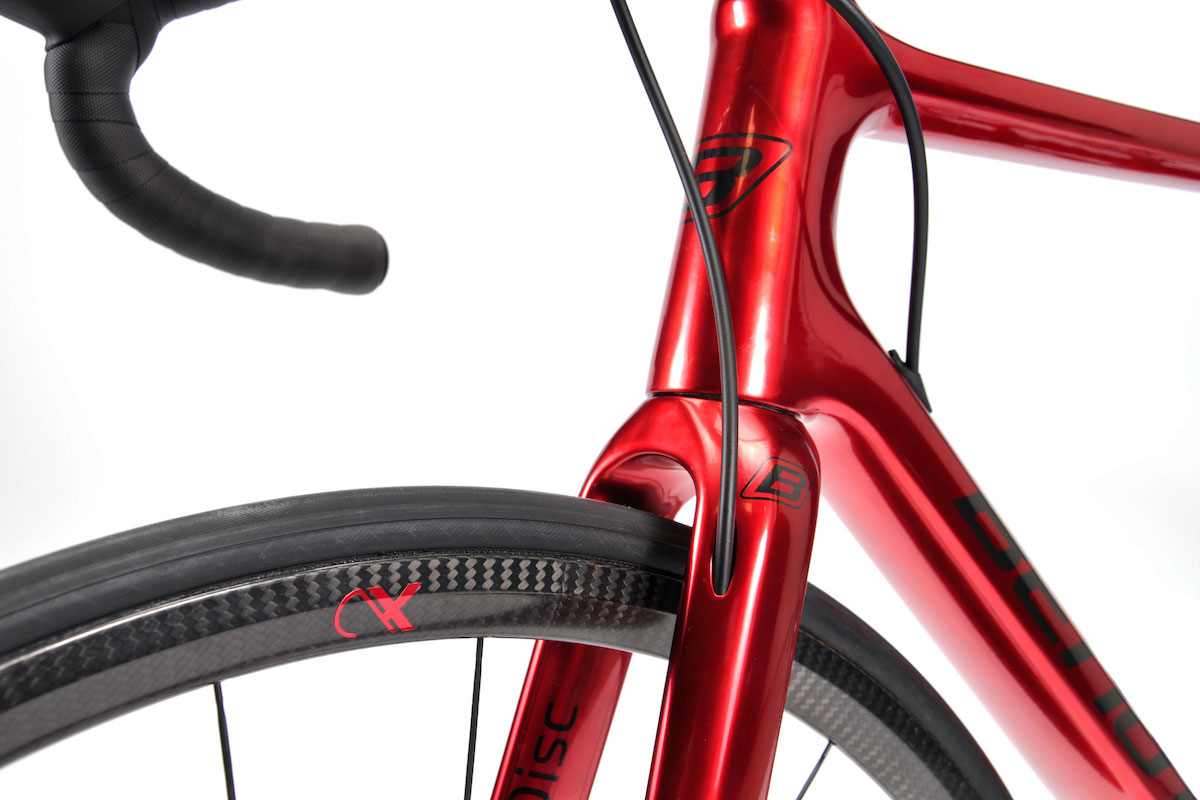 “Our target was not to build the ultimate lightest frame (which would have been possible), but to build the one with the best blend of properties,” said Nils Wiedemann, sales manager for AX-Lightness. “According to test protocols, the target should be to have a lateral stiffness over 100 N/mm to approve the frame for all rider weights. Besides us, only the Cannondale SuperSix evo breaks this barrier.”

Still, if you want an ultra-light bike that lets you soar up mountains or compete in events outside of UCI regulations, you can get the 5.6 kg (12.34lbs!) VIAL evo Disc in size medium. 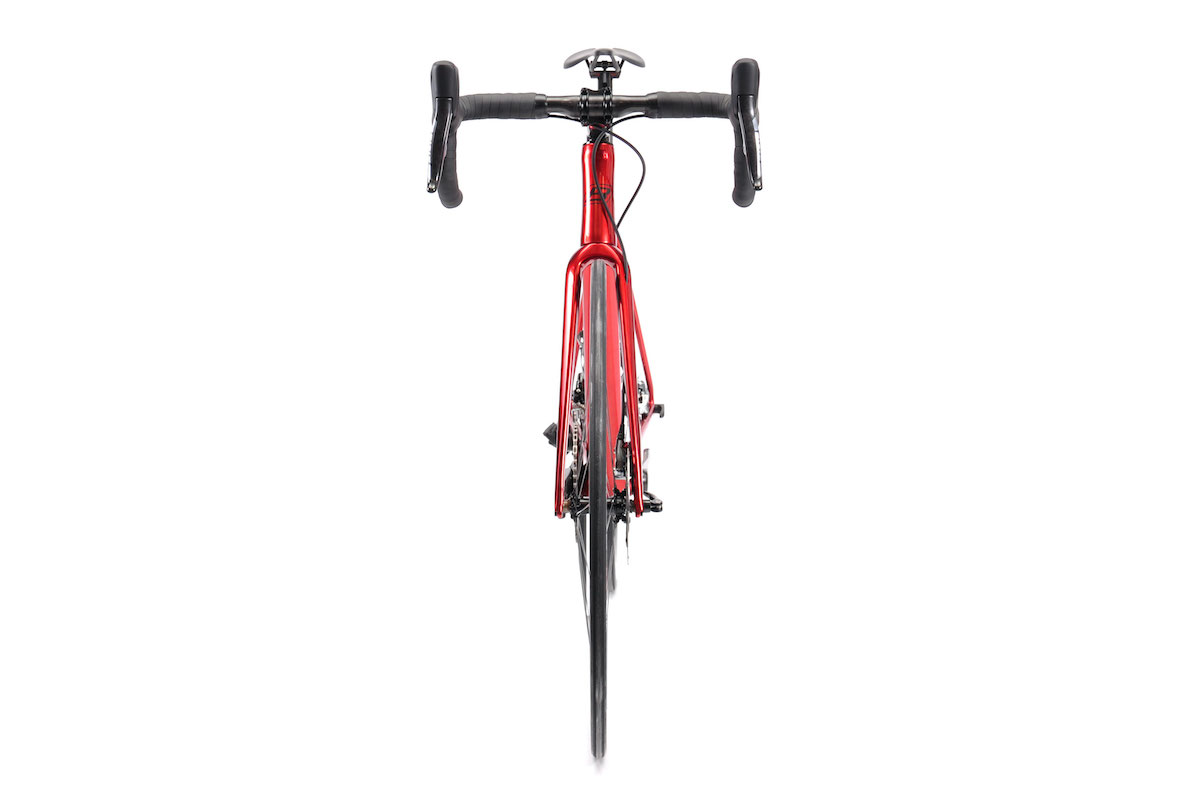 Two versions exist of the VIAL evo Disc, a standard edition and the Climbers edition, which features a red chrome finish and CeramicSpeed coated bearings in the wheels, headset, and bottom bracket. 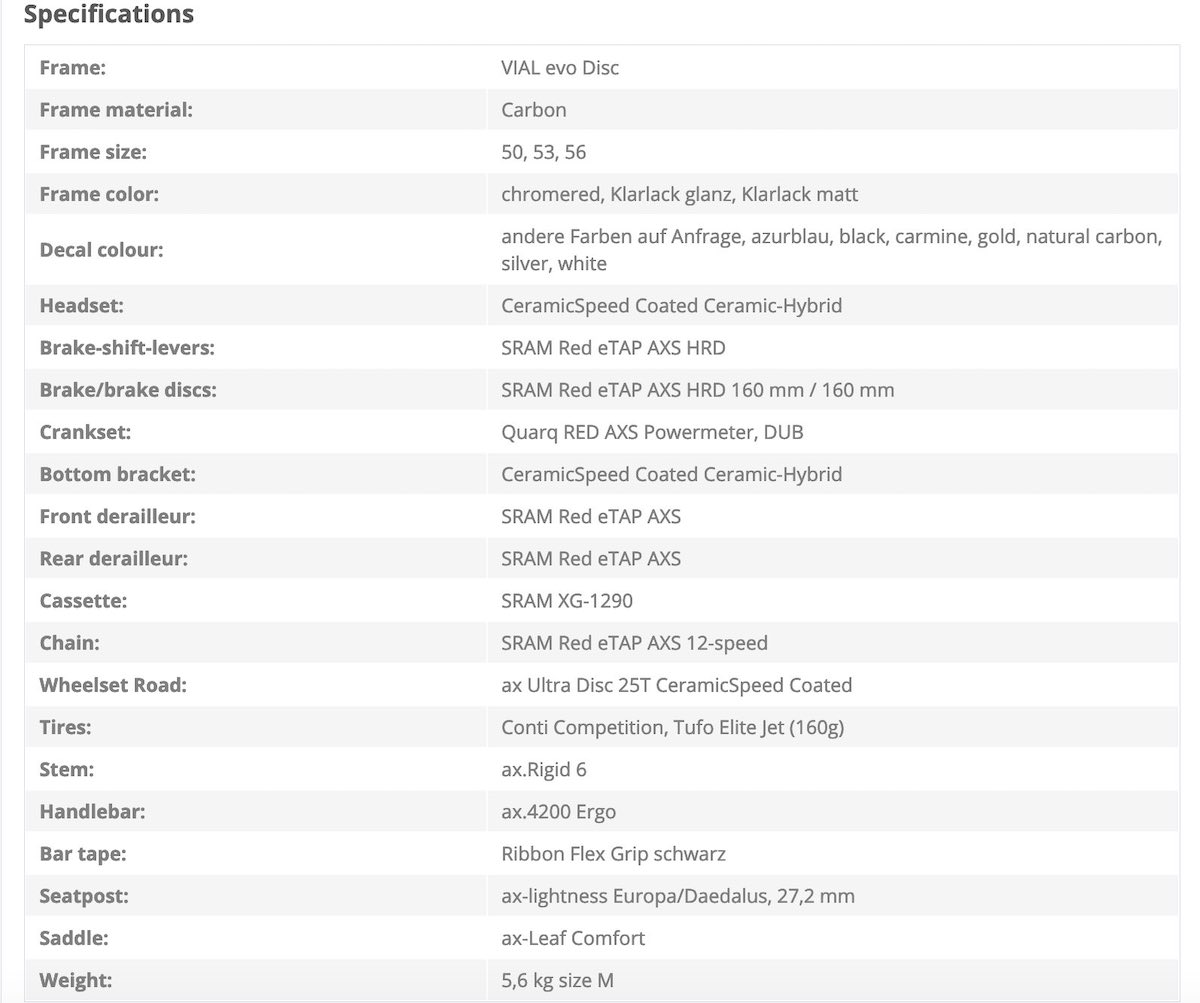 Prices for the new VIAL evo Disc start at €9,599 and, as of spring 2020, AX-Lightness started selling directly to consumers worldwide.

Just fournd it on the Beno site.
Even if I were rich, no likey the seat angle.

So much better than what you get FOR THE SAME COST from Trek, Cdale, Specialized etc… made in Germany, NOT China… Really great bike.

Can you show us your bike on weightweenies?