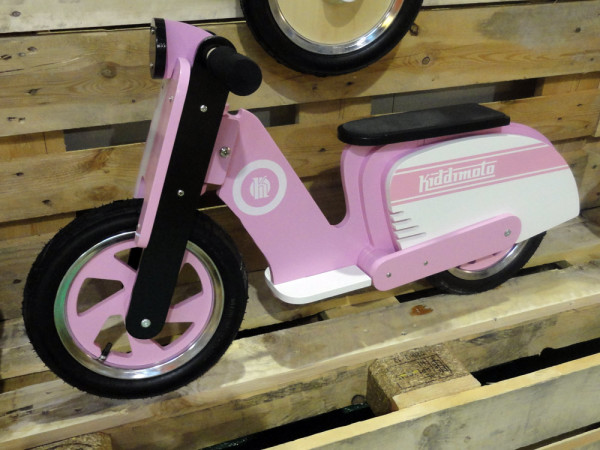 At the Berlin Bike show we spotted several unique bikes for getting kids on two wheels, including a company or two that we had never seen before. Most of the bikes were actually of the balance bike or push bike variety, but even there a little variation made for some cool products. The Pink Stripe Vespa replica above, aptly named Scooter, is one of several laminated plywood options from UK company Kiddi Moto. This one includes footboards that help train the push-and-balance motion, and retails for 170€ in either pink, red, or a Union Jack themed BritPop option. 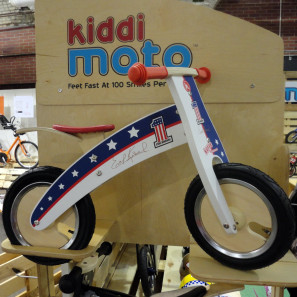 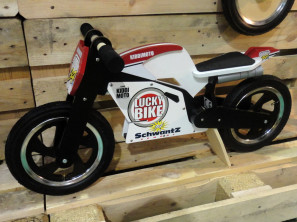 Kiddi Moto is pretty big in the UK, dealing almost exclusively in balance bikes and kid-centric accessories. They have a lot of unique looking wooden and metal bikes for kids from about 2-6 years old, plus matching helmets and gloves, that could help draw the interest of kids and parents alike. The Evel Knievel signature edition of their classic Kurve balance bike is new for 2015, and sells for 140€. The more complicated and flashy 170€ Heroes Kevin Schwantz signature replica is one of several options that brings motorcycle styling and cool to try to entice kids (and dads?) into riding. Kiddi Moto does ship worldwide from the UK, but is also working on partnering with more EU distributors to make their bikes easier to acquire. 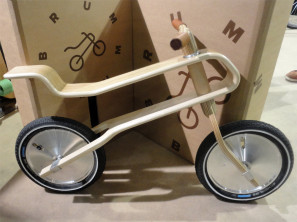 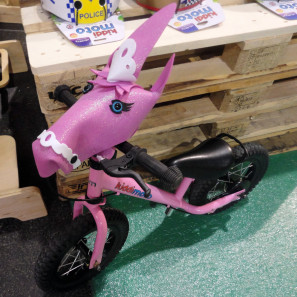 While we had seen photos of the unique Brum Brum laminated wood suspension balance bike sometime last year, in Berlin we had the first chance to see one in person. The Latvian laminated plywood balance bike is still in the later prototyping stages, as the designers are trying to further optimize the flex of the frame to give some suspension for the small kids who will ride it, while keeping it strong and durable (when an adult without fail tests it out.)  This version seemed plenty stout, still weighing about 2kg. Availability is expected in the next few months, but pricing has not been announced, although unsurprisingly figures at the higher end of the balance bike market have been suggested to us.

Back on one the Kiddi Moto Junior steel bikes I saw something else kind of cool that was drawing the attention of a few smaller cyclists at the show. Decorating the bar of this tiny bike was a Handlebar Heroes foam pony head. Another UK brand, these folks are selling flat-packed foam horse and dragon heads for 10£ and up for the full-sized ones, that you fold into shape to safely decorate a kid’s (or adult’s, we won’t judge) handlebar. 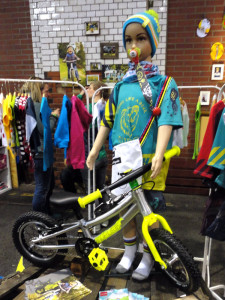 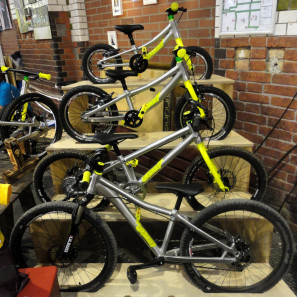 This pimped out child-sized mannequin, modeling a bunch of mini cycling wear, is outfitted to hit the trail with mom and dad by the folks at Race Baby clothing. Race Baby sells Freeride kits, classicly-styled Coolmax jerseys, and even real Merino jerseys to match hipster ma and pa. Plus they have a whole line of off the bike lifestyle clothes to flaunt your parenting superiority. If you or someone you ride with has little kids, their stuff is seriously worth taking a look at.

German kids’ bike company Supurb was founded a few years back by some avid mountain biking parents frustrated with the limited options for quality premium bikes for children. The BO series of light aluminum-framed bikes was developed from balance bikes up to a 24″ mountain bike, each with a different focus to gradually develop the young cyclist as they grow and progress from pushing trails to shredding them. Pricing grows too, from 175€ for the first push bike, to 400€ for the 12″ singlespeed, 700€ for the geared 20″ that adds hydro disc brakes, and 800€ for the 24″ bike that includes a kid-friendly suspension fork. Across the range bikes include quality kid-sized contact points, SRAM components, and Schwalbe tires. Their site is as of now only in German (so let google translate be your friend), but they regularly ship throughout Europe and list worldwide shipping prices on their site.

Kiddimoto is a joke. The bikes are held together with wood screws and the wheels are so far from round it isn’t funny. Waste of time!

Except for the cigarette reference, I love the “Lucky Bike”