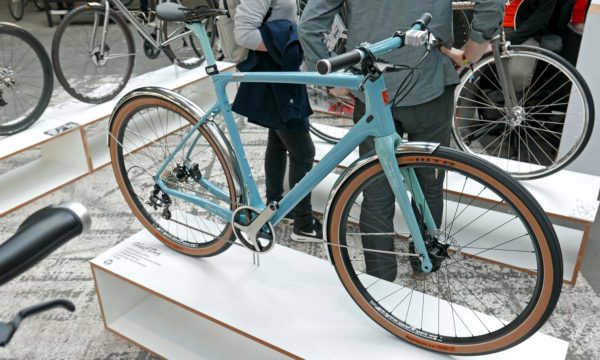 For a few years we’ve seen Velocipedo producing limited production bikes in titanium and carbon with a creative attention to finishing details. This year they were back at the Berlin show with three new bikes – a subtly glow-in-the-dark carbon Ghost Dog city bike, a ti urban commuter & touring bike called the TalisMan, and the ti Itchy Feet randonneur begging to be taken out on tour or even just to the office each morning. 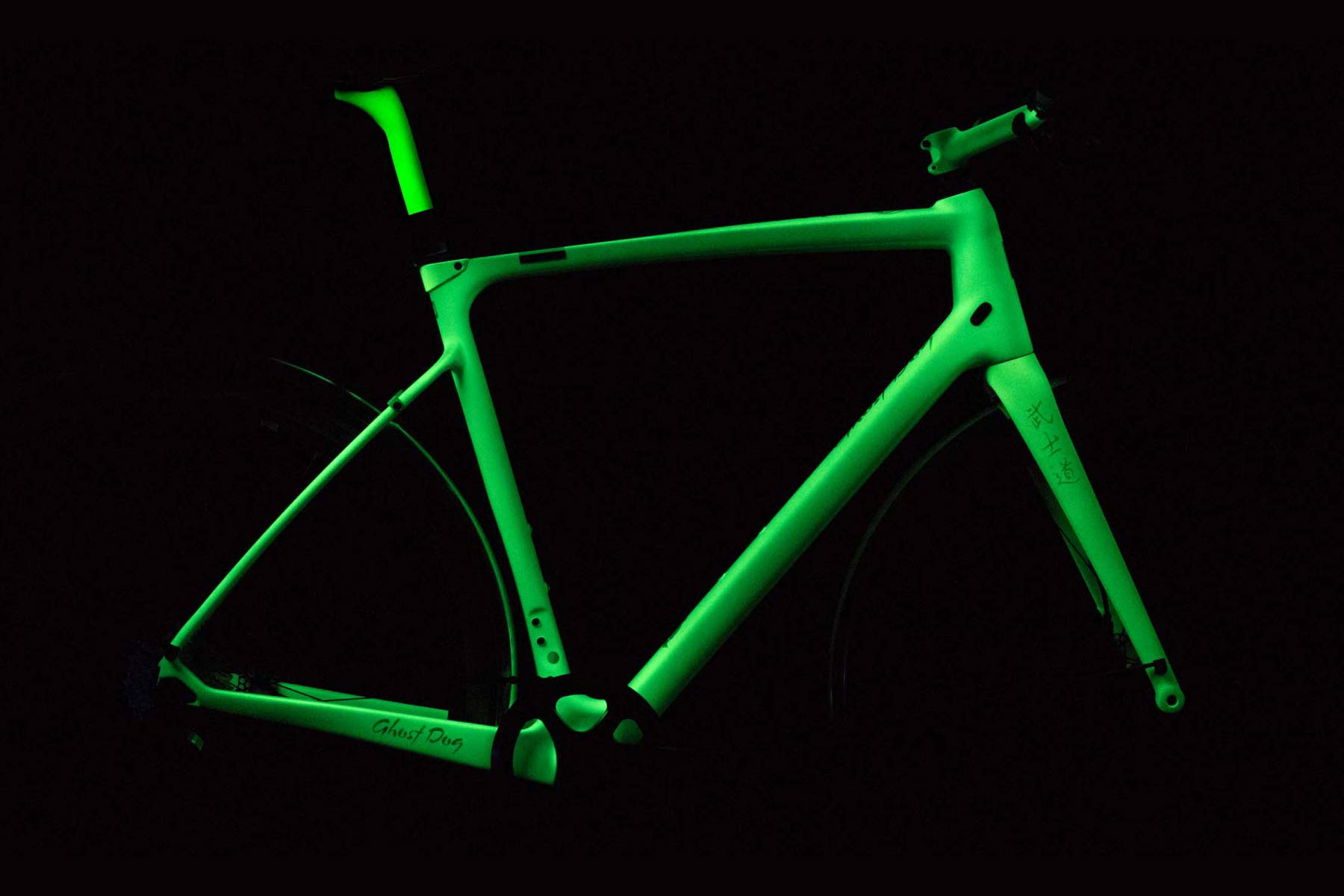 Limited to just 15 bikes, the carbon Ghost Dog does in fact glow in the dark.

The bike gets its name from the Jim Jarmusch film, that inspired Velocipedo to create a bike to slip quickly in and out of the city. It also was a chance for the bike maker to use their graphics to celebrate a love of the samurai, and an excuse to break out a bit of Kanji script. 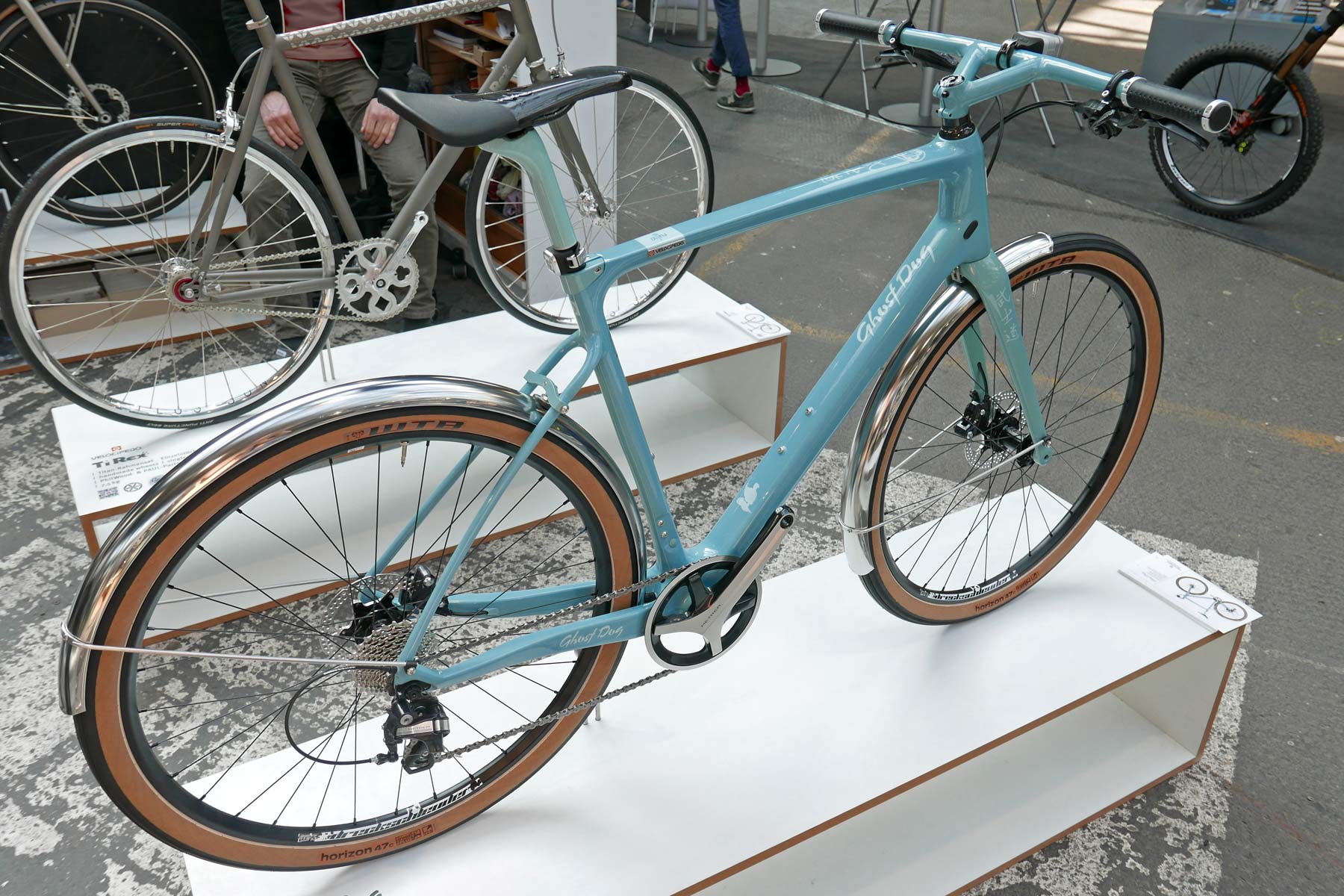 Built with a carbon Ritchey Bullmoose flat bar, a Shimano Metrea 1x groupset, full coverage fenders, and 650b wheels sporting WTB Horizon tires, the bike makes a killer fast commuter that would also be a blast to ride off the bike path. 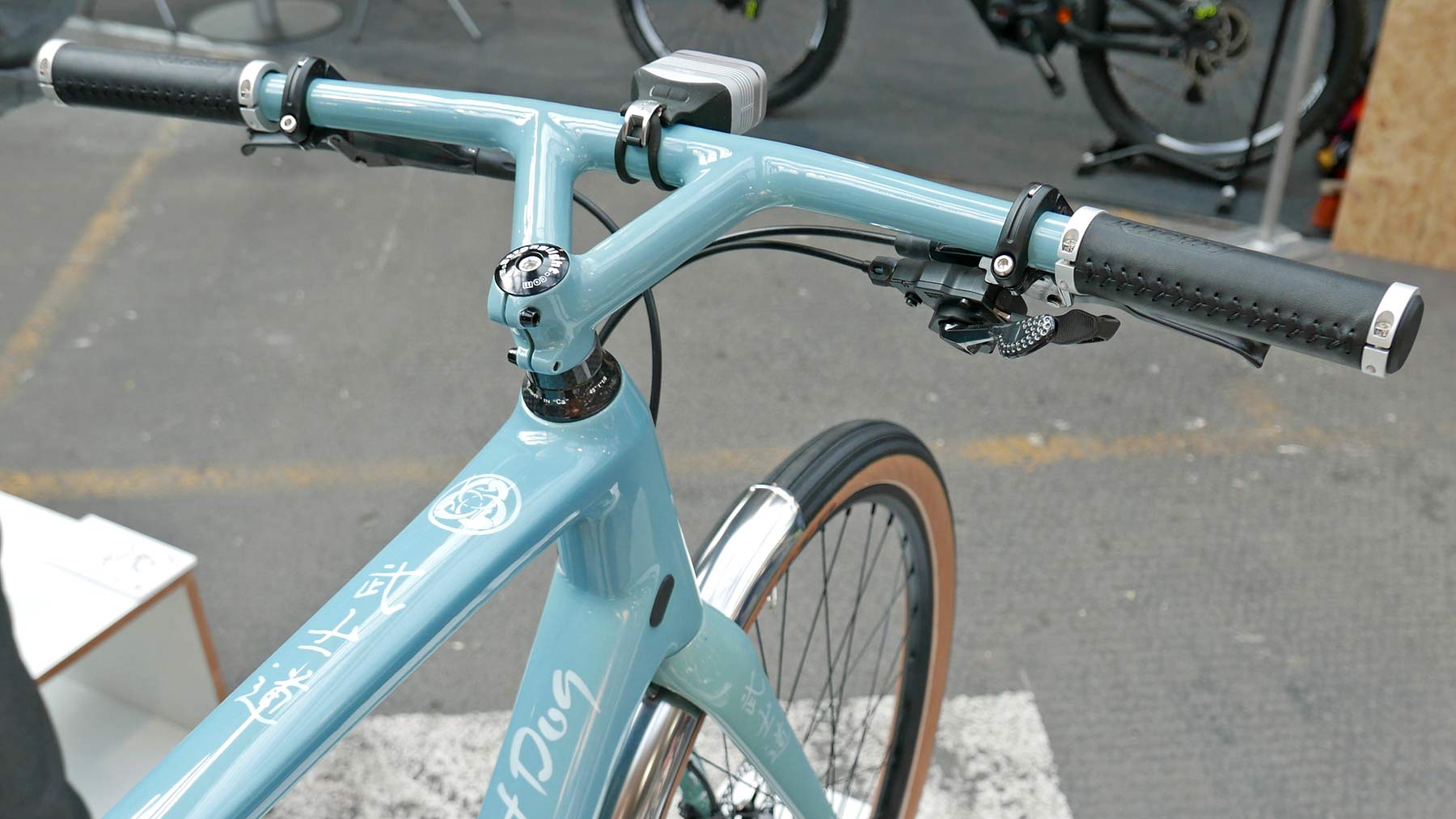 The bike offers clearance for the 47mm tires, plus fenders and uses flat mount brakes & 12mm thru-axles. While this build uses a single ring setup, the frame features modular internal routing and will accept a bolt-on front derailleur as well.

We were quite surprised to see that the sky blue paint was subtly hiding the glowing feature. Most glow-in-the-dark paint I have seen has a sickly yellow color that gives away its phosphorescence, but this bike actually looks quite nice in the daylight. 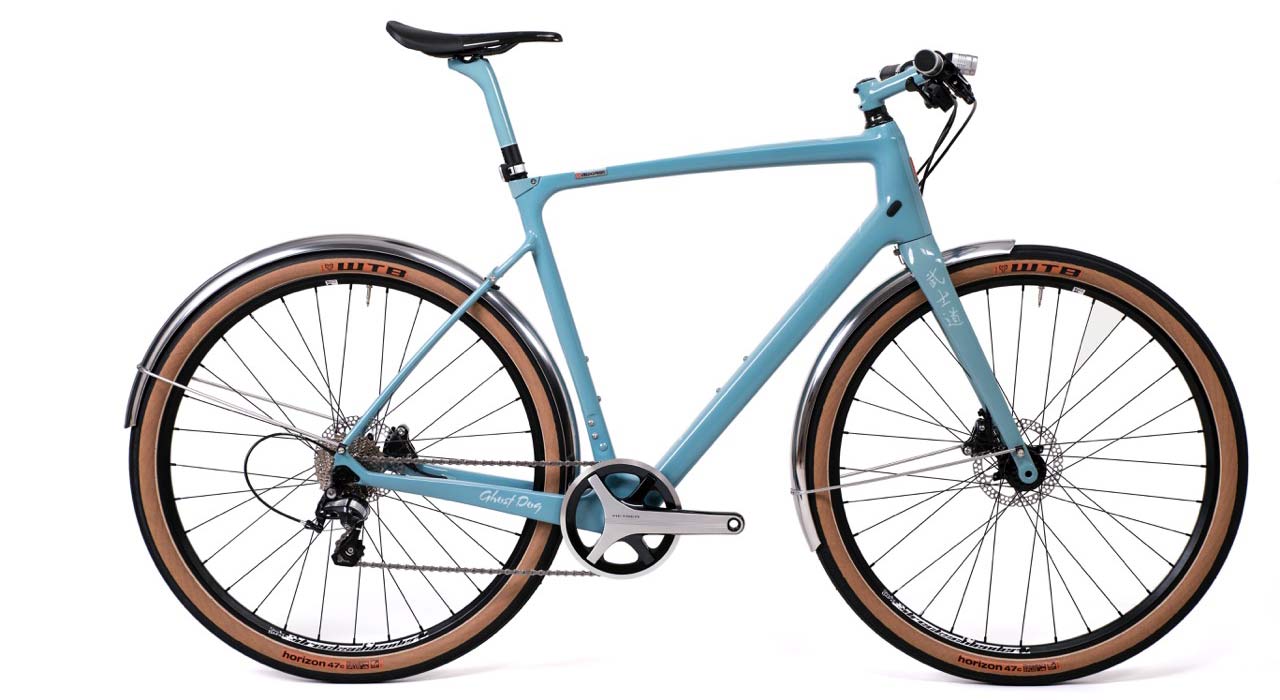 Pricing for the three new bikes isn’t set in stone yet. They just debuted last week at the Berlin Bike Show, and Velocipedo hasn’t even had a chance yet to get studio photos or put their details up on their website. But we’ve been told that a complete bike build should sell for ~3950€. You can also buy one of the 15 Ghost Dog framekits alone for 2650€, which includes the painted to match nightglow frame, fork, bar+stem combo, seatpost & alloy saddle clamp, plus a StrongLight headset. Velocipedo carbon bikes also come with a 5 year warranty. 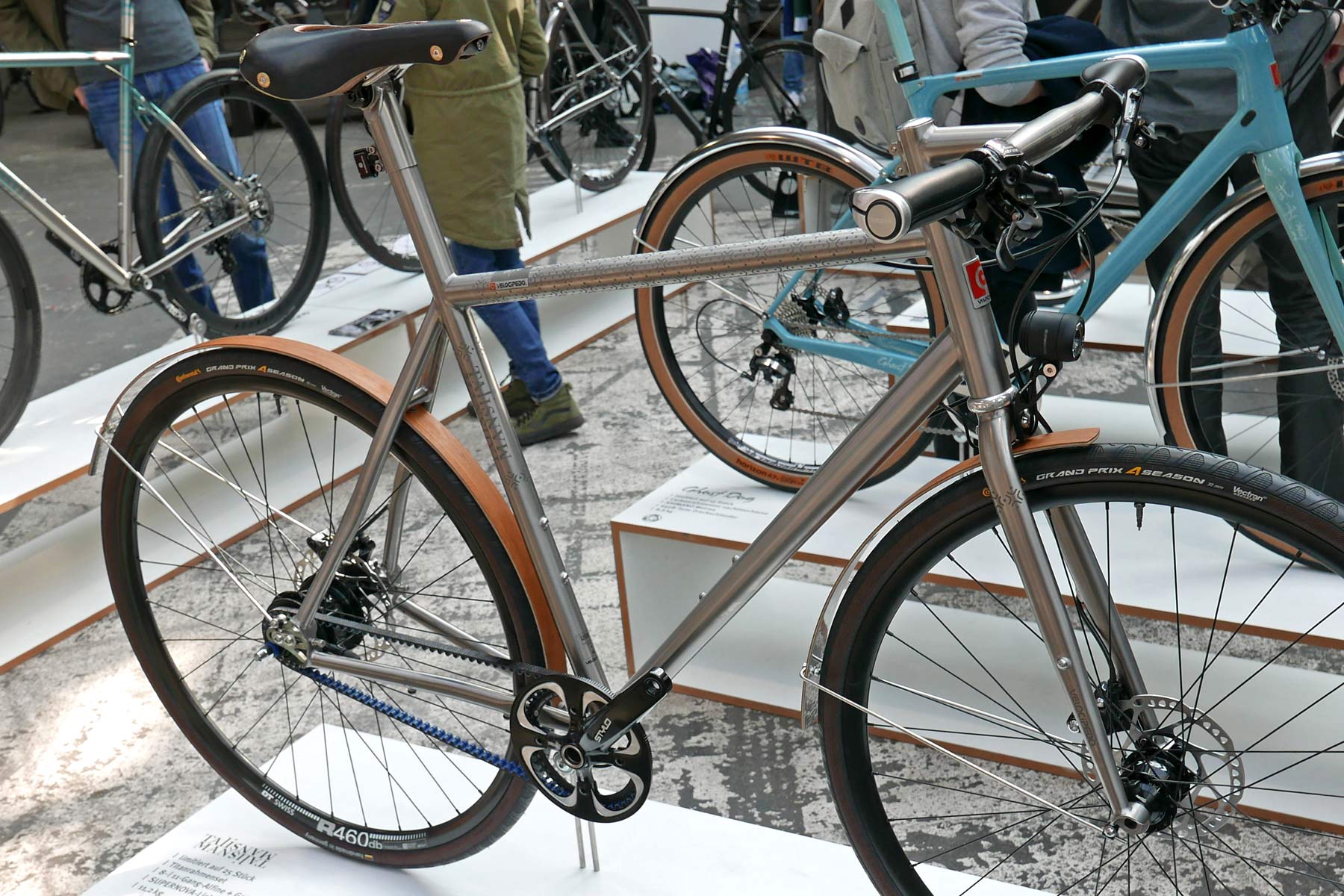 The TalisMan is a bit of a return to the basics for Velocipedo – a titanium city bike with only low key media blasted on top of polished graphics. But the bike is by no means boring. Velocipedo goes with a fully integrated approach and a design that means you won’t really ever have to do much to keep this super commuter rolling. 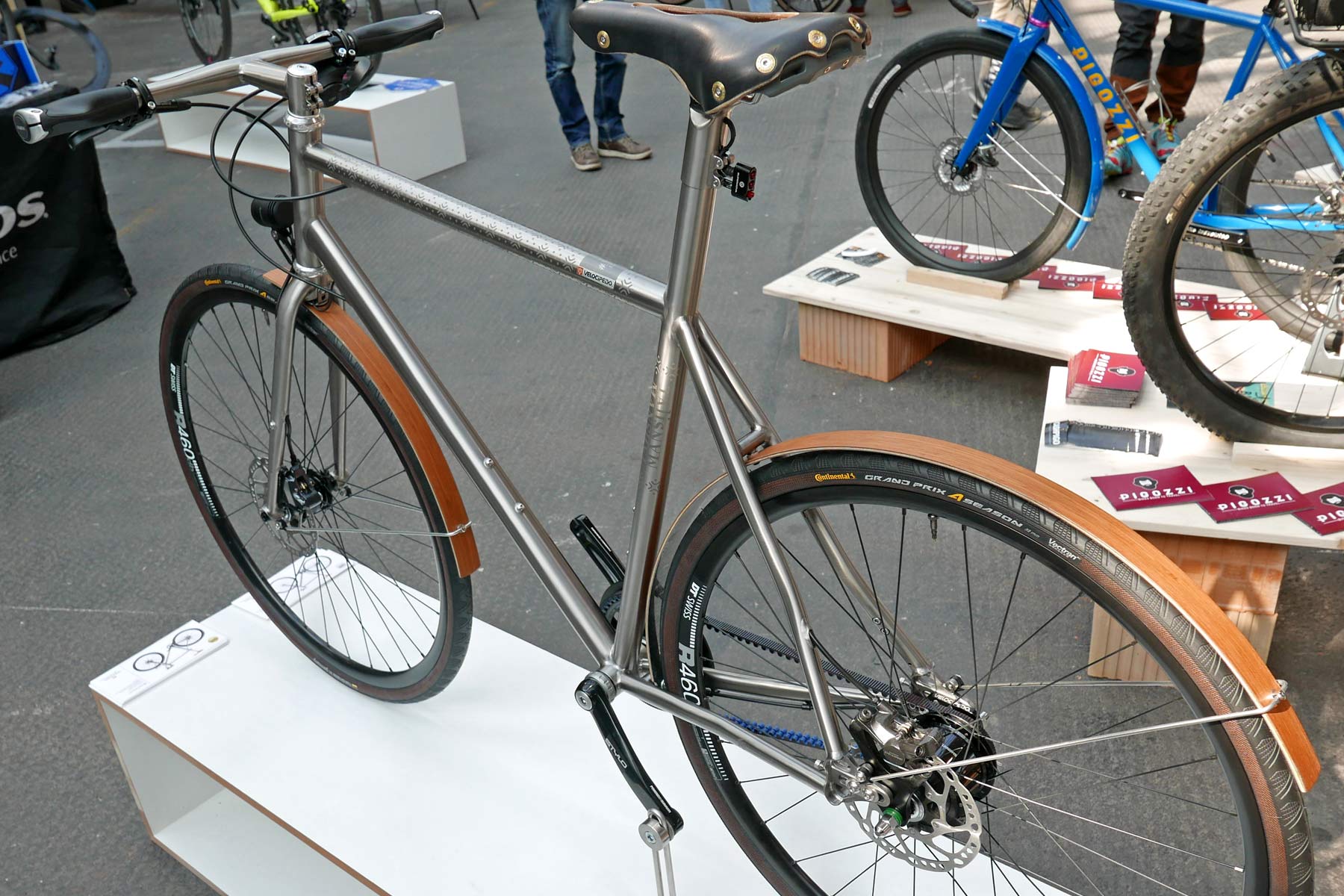 As set of sliding rear dropouts and a split in the driveside stay makes the bike friendly with a Gates belt-drive setup, and pairs well to the internally geared Alfine rear hub. The sliding drops & Alfine mean the rear needs to stick with a IS brake mount & bolt-on axle, but the fork goes modern with flat mount & 12mm. 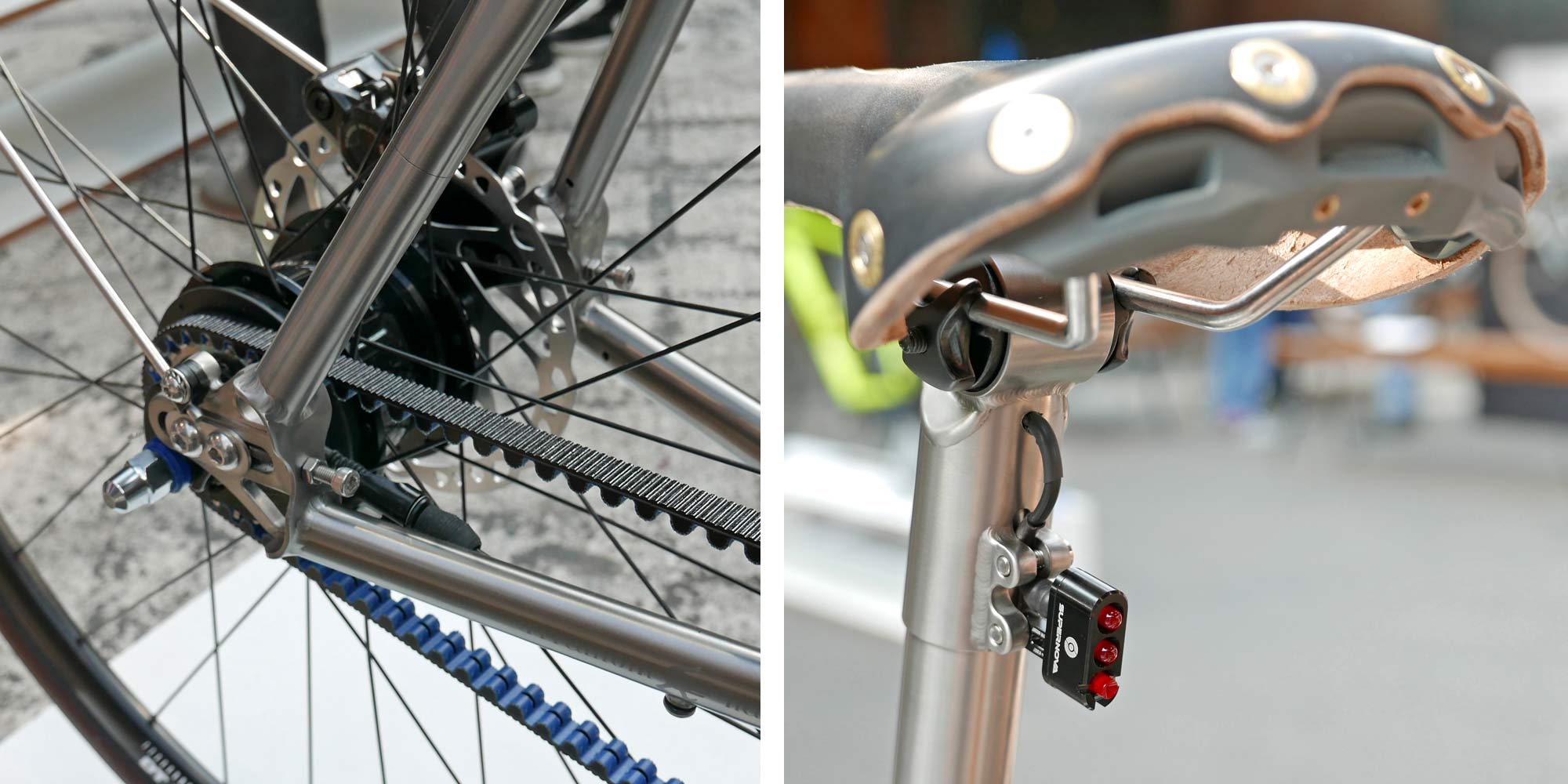 The bike gets an integrated seatpost design that allows for a super clean integrated Supernova LED lighting solution with stealthy internal routing, and of course a generator hub to power it all. The urban mobility vibe is topped by a set of wooden fenders made more practical by their aluminum inner lining. 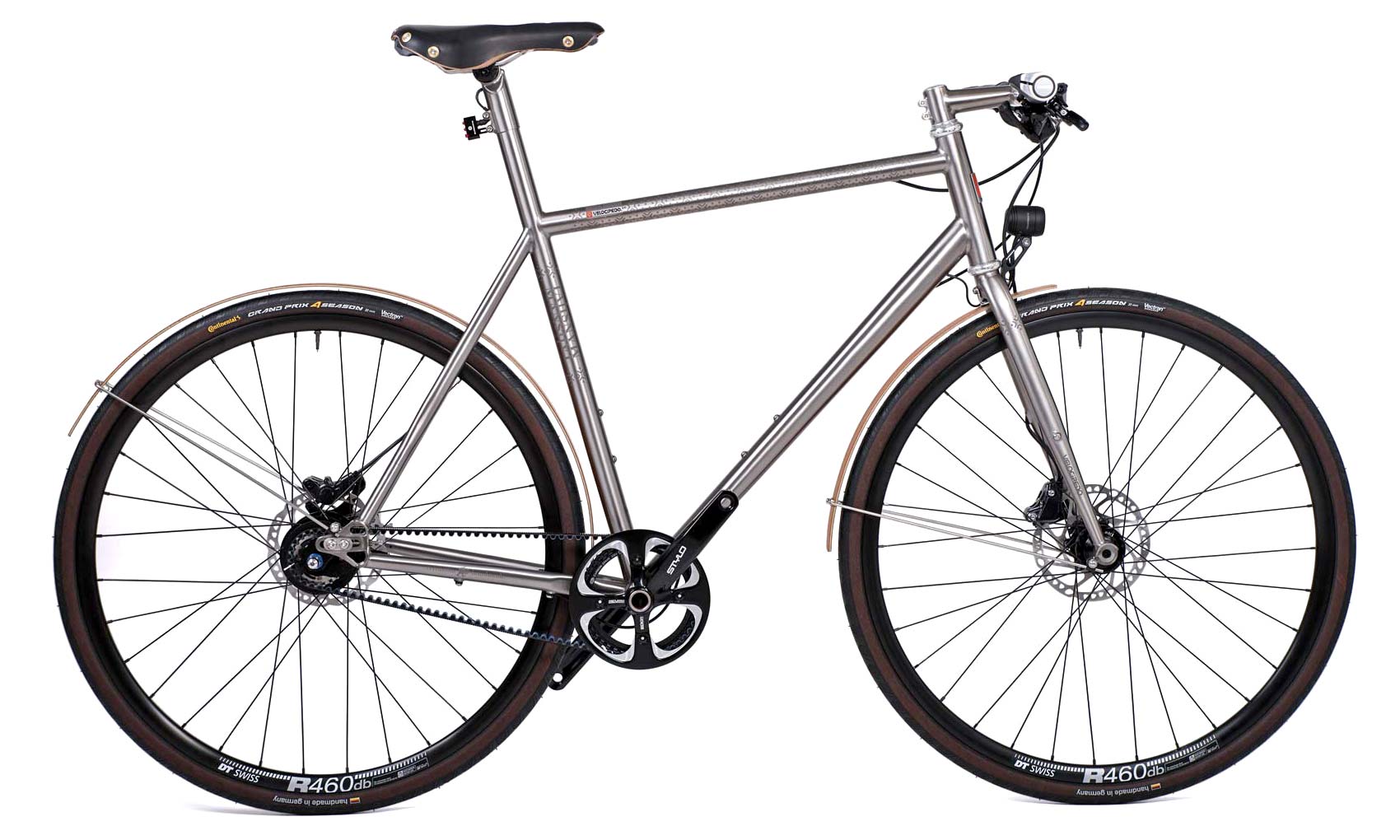 Limited to 25 framesets, the TalisMan as it was shown claimed a weight of 11.2kg and would sell for ~4500€. The framekit with all titanium frame, fork, stem & seatpost head, plus a Chris King headset will retail for 3250€. 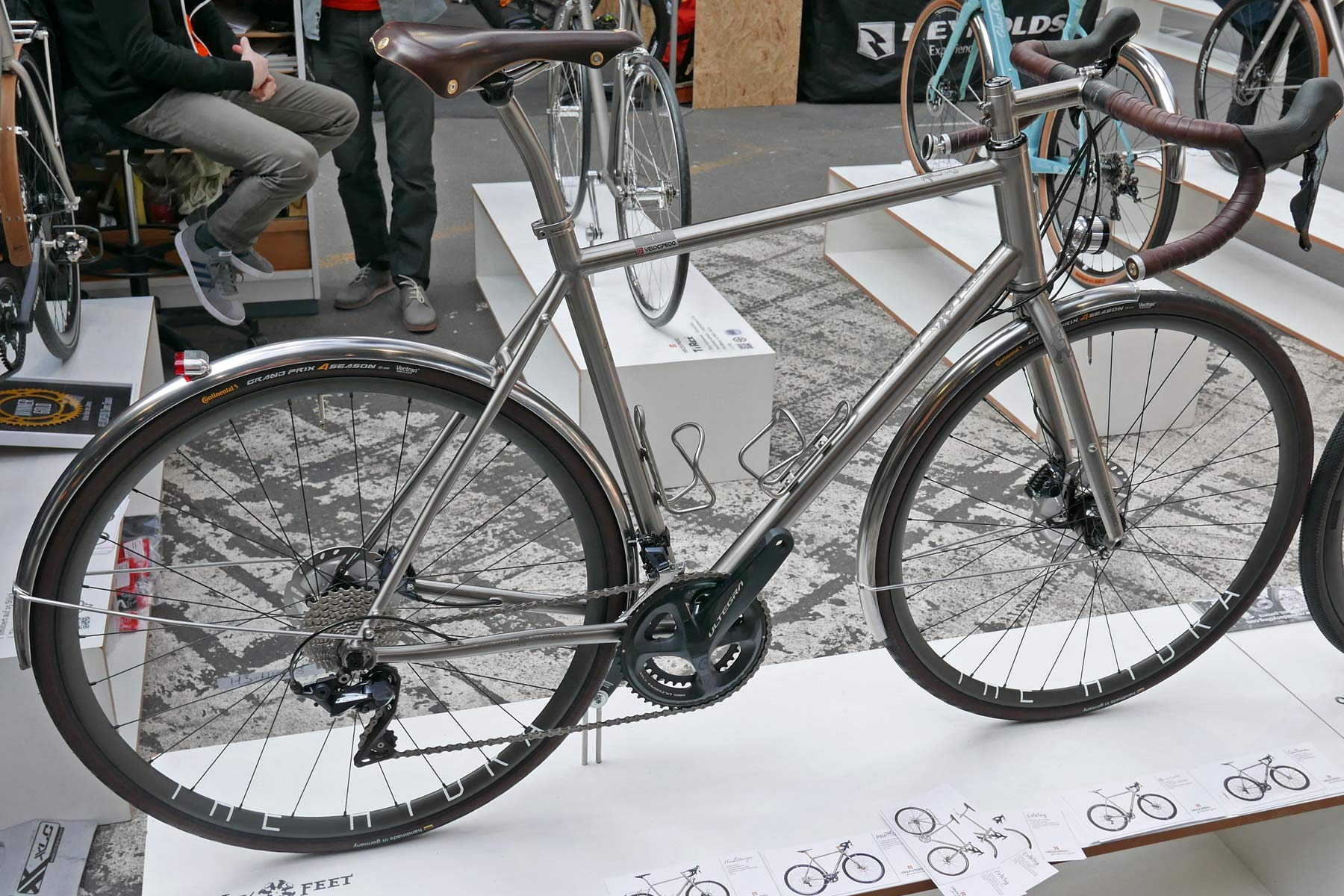 The Itchy Feet takes it name from the colloquial German description of someone who just can’t hold still. This bike wants to wander. This is where Velocipedo shines – a clean and simple build with fun, and well-executed graphic details throughout.

The 3/2.5 titanium frame features internal cable & hose routing and a straight headtube with a integrated headset. Standards are classics like a threaded BB & 27.2 post that will make for a future-proof build with reliable comfort. 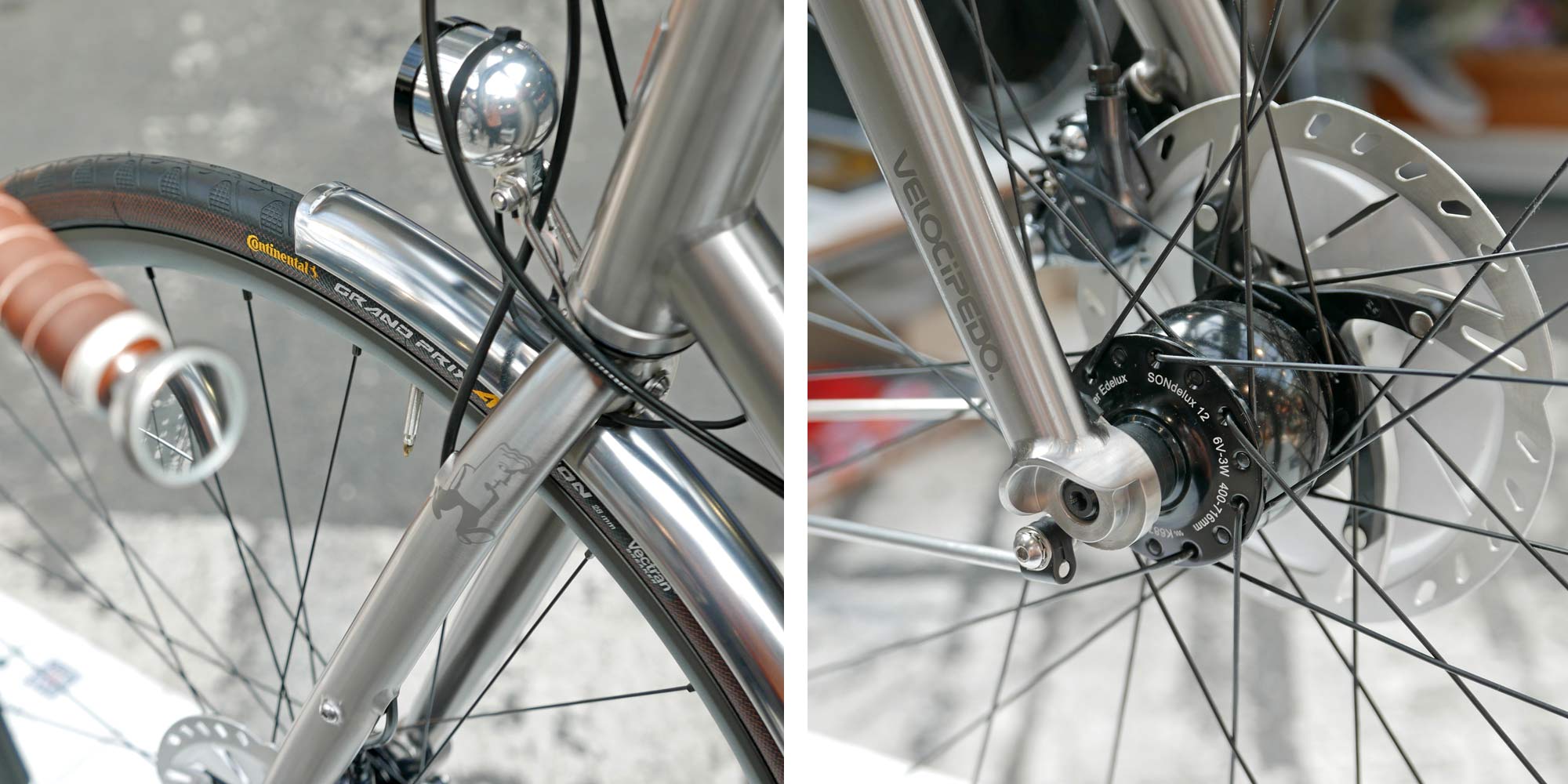 A SONdelux generator front hub pairs with the SON LED lighting, the rear neatly integrated into the full coverage fenders. And a Gilles Berthoud mirror slipped into the bar so you can keep an eye out on tour. 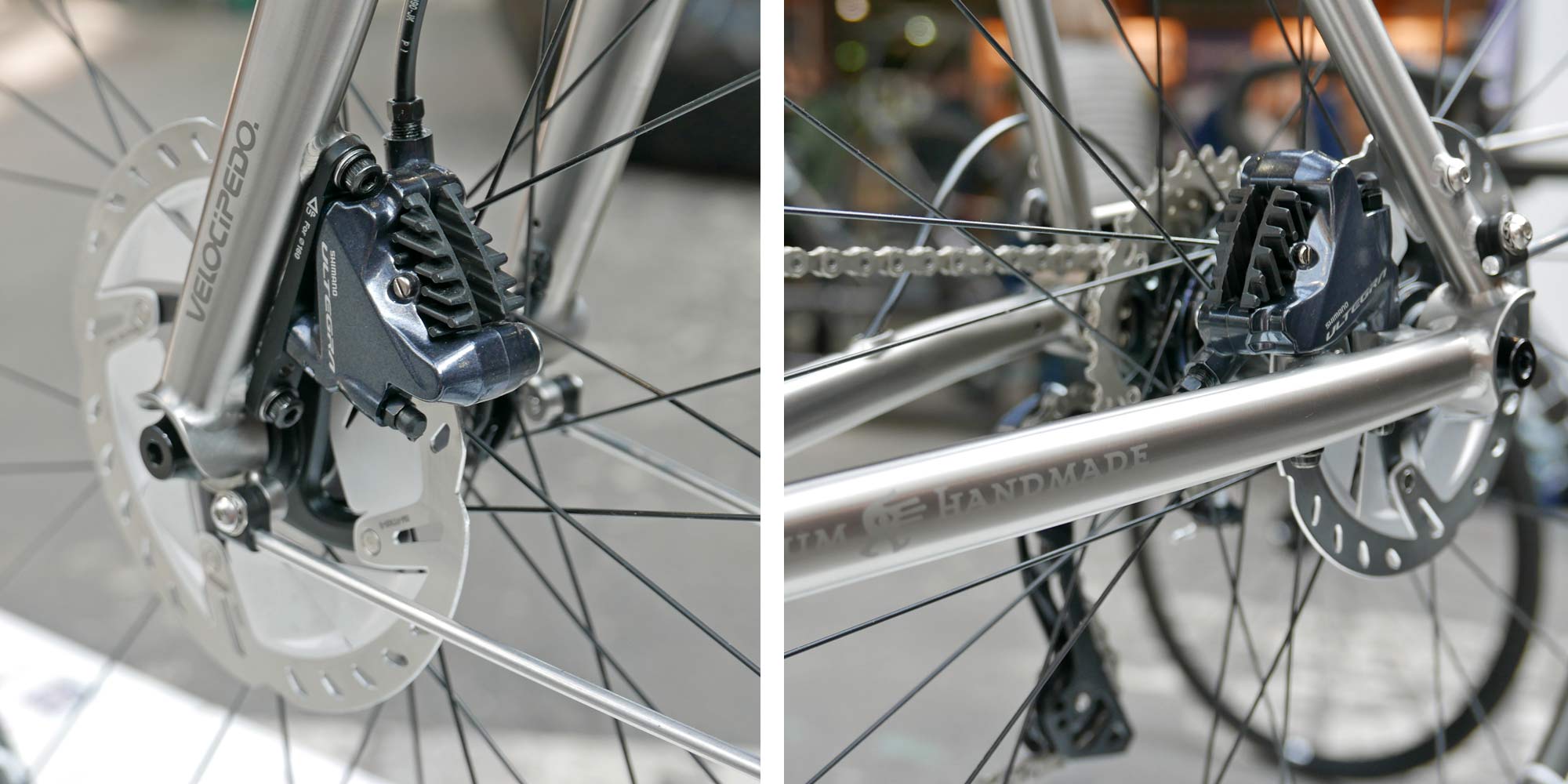 The bike gets a modern road disc setup with 12mm thru-axles & flat mounts at both ends. And it’s hard to argue with this bike’s classic Ultegra R8000 compact double groupset and classic look finishing kit for a claimed complete bike weight of 9.8kg. 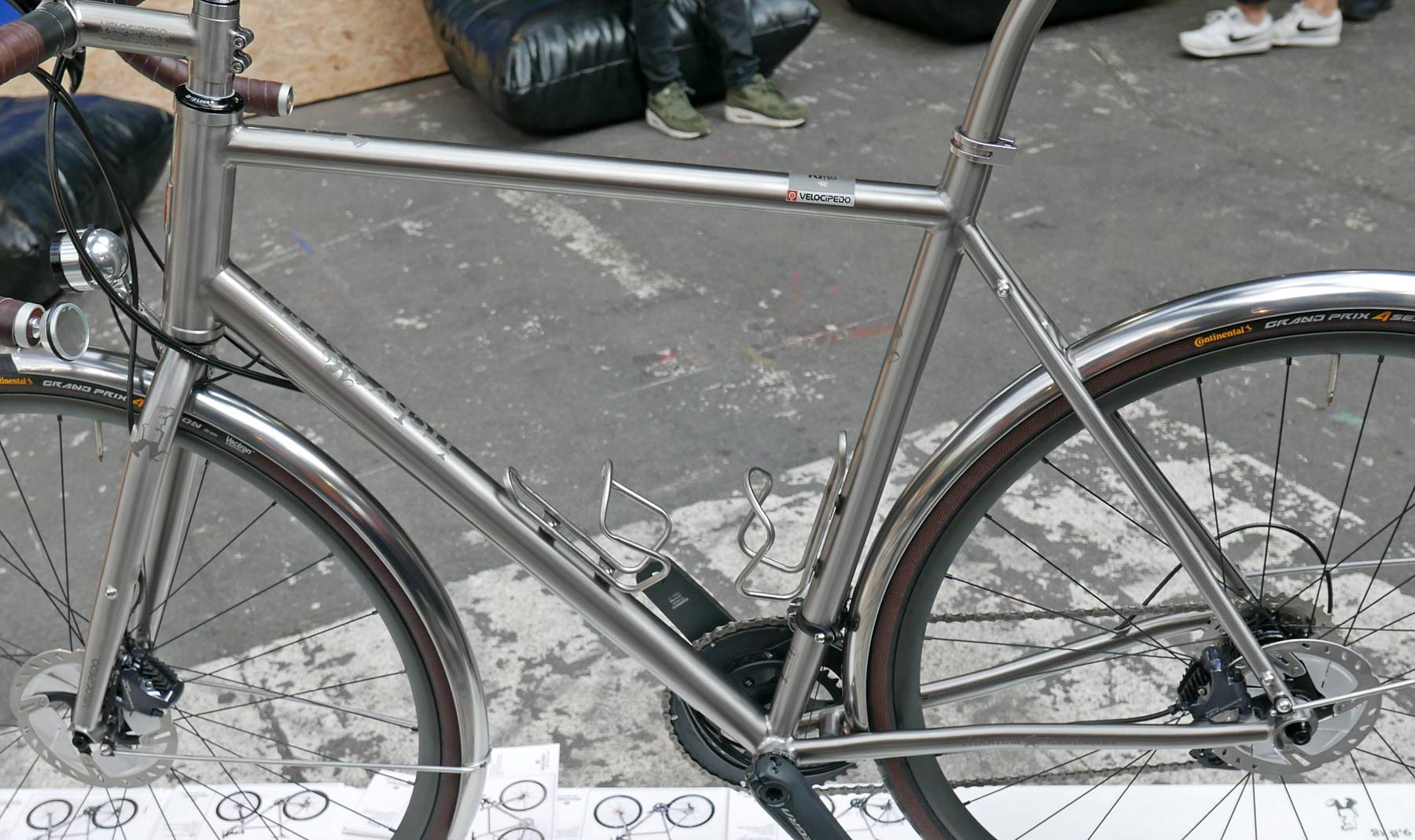 The ItchyFeet super road tourer is the most expensive of the bunch with a price as shown here of ~6400€, and being limited to just 15 framesets. 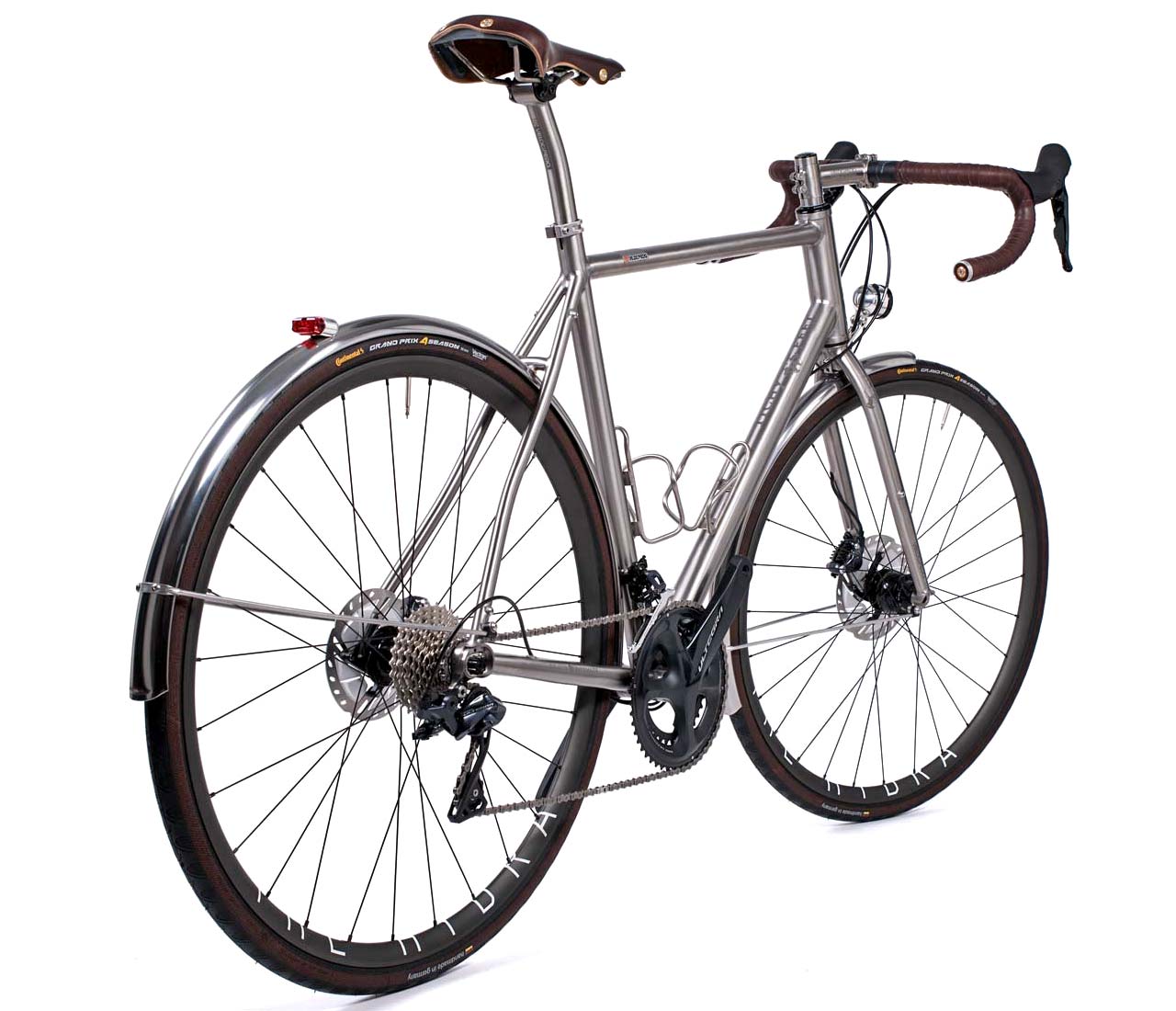 Like the TalisMan, the Itchy Feet frameset would sell for the same 3250€, including the ti frame, ti fork, ti stem, ti seatpost, ti seatpost clamp, ti bolts throughout, and an alloy Chris King headset – all including EU VAT and shipping within the EU. The titanium bikes all include an official certificate and feature a 15 year warranty.