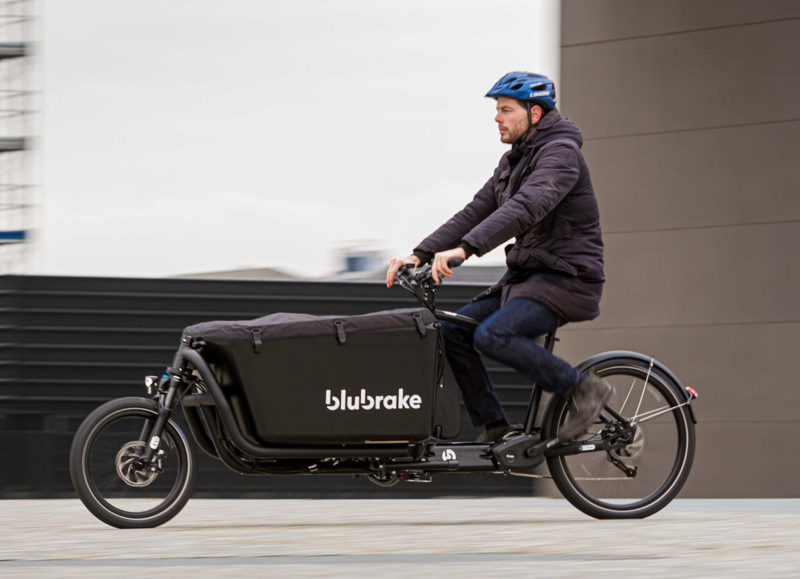 It’s pretty indisputable to state that the bigger and faster a vehicle is, the better brakes it requires. As today’s electric bicycles are much heavier and faster than bicycles have ever been, so it’s no surprise Italian company Blubrake has created an ABS system for e-bikes.

Founded in 2015, Blubrake specializes in braking systems for Light Electric Vehicles (LEVs). They can now lay claim to the world’s first anti-lock braking system designed for electric cargo bicycles. The company is already working with several prominent e-bike brands, and consumers can expect to see their new ABS system appearing on stock bikes within a few months. 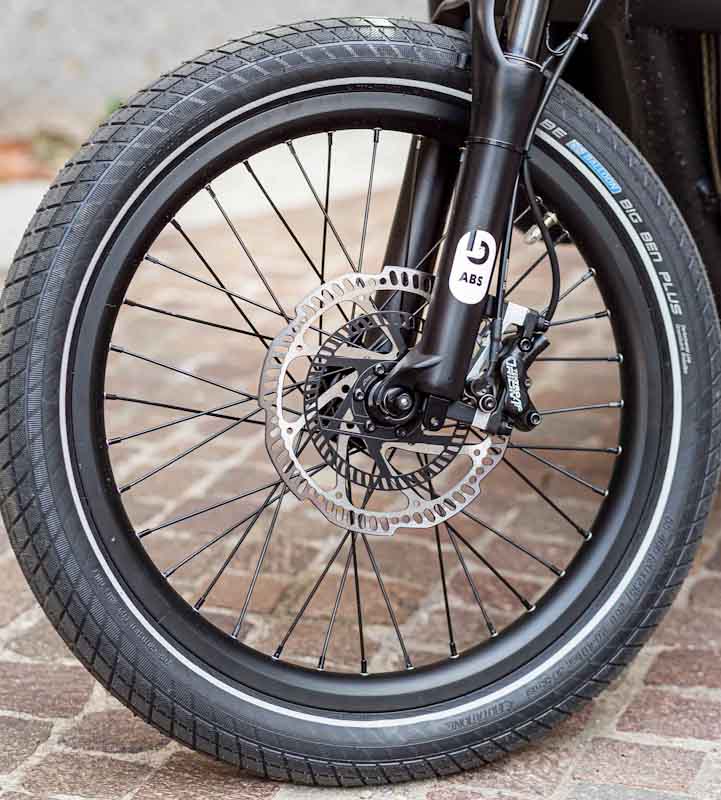 The Blubrake ABS System is intended to be run on the front wheel(s) of e-bikes, especially e-cargo bikes, to help the rider maintain control whether the bike is empty or loaded up. Unloaded e-cargo bikes can be light on the front wheel and skid easily under sudden braking, and there’s little room for such errors in crowded city streets.

As its name implies, the anti-lock braking system prevents the front wheel from locking up and skidding. A wheel that’s not skidding maintains some degree of braking and steering control, potentially saving riders from accidents or collisions. 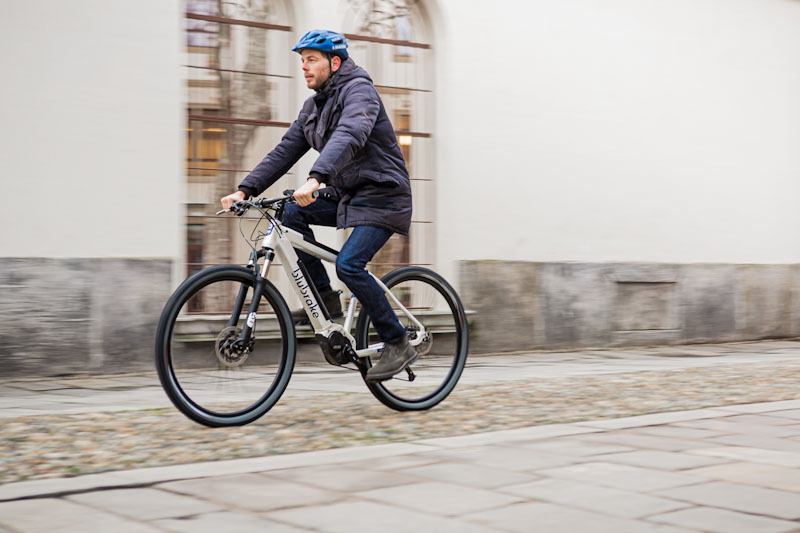 While we humans often think we know best, this system could definitely be beneficial in sudden situations where riders tend to panic and squeeze their brakes for all they’re worth. The ABS system should shorten stopping distances at the least, and possibly even allow for an evasive manoeuvre. 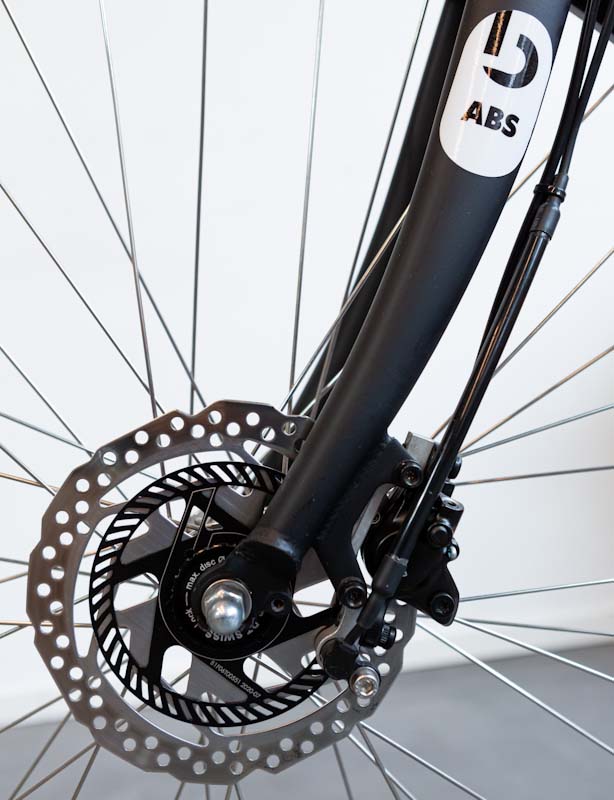 There are three key elements to the Blubrake ABS system; the sensors (front wheel speed sensor(s) and frame-mounted accelerometers), a control unit, and an actuator.

As you ride, a wheel speed sensor constantly measures the speed of the front wheel(s), and sends that data to an electronic control unit (what looks like a second, smaller brake disc is actually the ‘Phonic Wheel’ which is what the wheel speed sensor measures from).

Accelerometers attached to the bike frame also send their data, and the control unit estimates the dynamics of the bicycle and detects potentially dangerous situations. If the system senses a braking problem, the control unit tells an actuator to step in and finely control the flow of hydraulic fluid to your front brake(s). Braking power can be electronically increased or reduced as required. 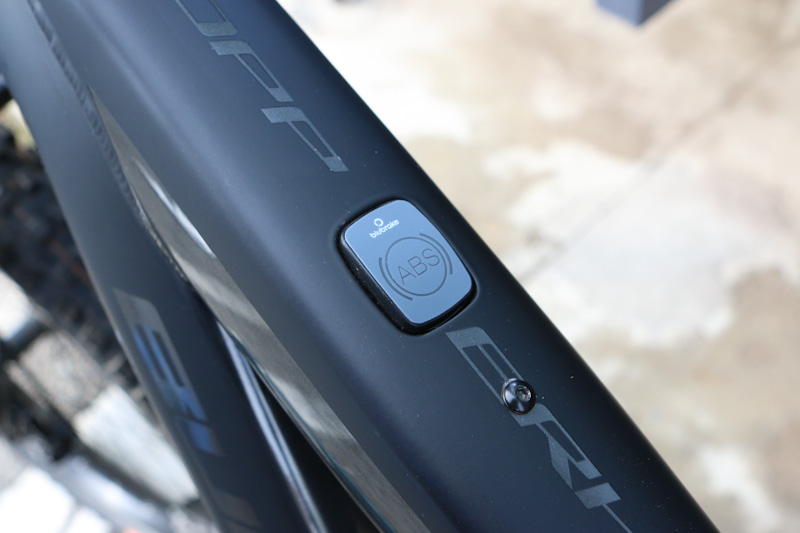 *Here’s an example of a neatly integrated Blubrake display unit.

The system also includes an HMI display that shows a green light when the braking system is functioning correctly, or a yellow light if the system is starting up or disabled due to a fault. If the ABS system is disabled, your brakes will simply function as they normally would. 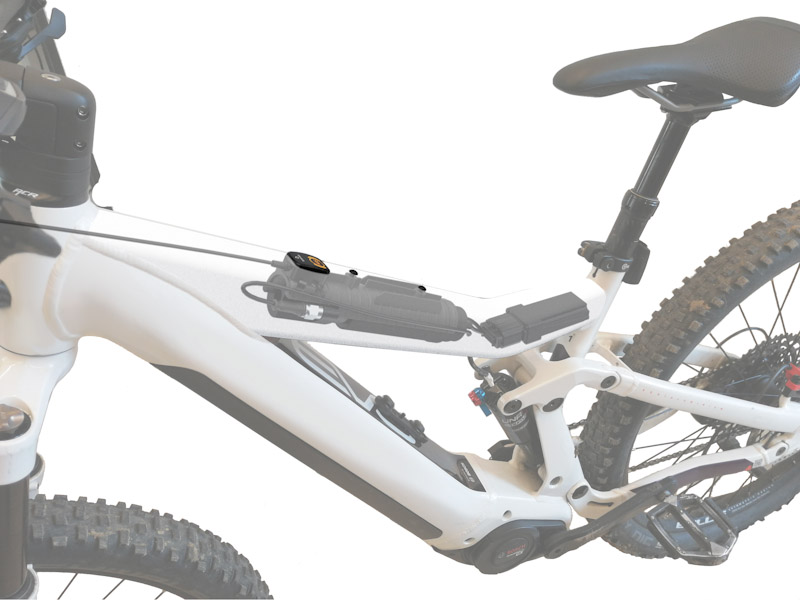 Blubrake’s ABS System doesn’t add too much bulk to a bike – Up front the only additions are the Phonic Wheel, a small speed sensor assembly, and the compact display unit on your handlebars (if not integrated somewhere). Blubrake has kept the control unit small and shaped the actuator into a cylinder so manufacturers can neatly hide them inside frames.

I wondered if this brake system would pulse rapidly like automotive ABS systems do, and after watching Radelbande’s informative video on Blubrake’s website I got the answer. A few minutes in, the test rider says he feels some pulsing through the brake lever when the system kicks in. Aside from the pulsing, he does mention that braking feels pretty similar to a non ABS equipped bike. 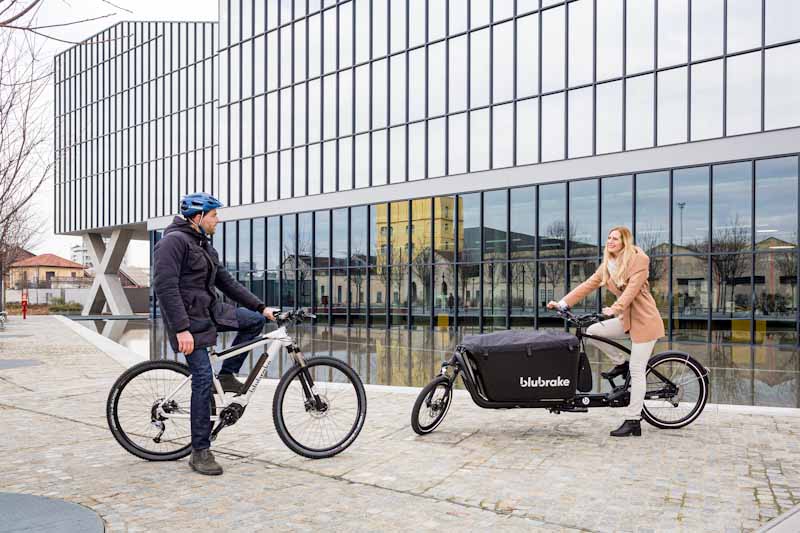 Blubrake states they hope to become the safety standard for e-cargo bikes, so they’ve ensured their ABS system is nearly universal. Blubrake ABS is compatible with most hydraulic disc brakes on the market, and can be connected to most e-bike power systems.

One interesting thing to note is while Blubrake’s press material focuses on e-cargo bikes, some brands they have partnered with (including Bulls, Stromer, Crescent, Bianchi and Trefecta) have put the system on e-commuters and eMTBs as well.

Currently the Blubrake ABS System is only being offered to manufacturers, so if you were hoping to add it to your e-bike you’ll have to wait and see if they develop an aftermarket kit.

What a nonsense. I’ve been riding Cargo bikes on a daily basis for at least 10 years and this invention is the last, i would have asked for. My setup is a Long-John with most brutal 4 piston brakes on both wheels one could find and a 203 mm rotor in front. To be honest: if the bike is empty, one could block both wheels at the same time. But even in this case, handling remains nonproblematic. However, going empty is not the purpose of a cargo bike and this happens just rarely. In most cases the overall weight is approx. 150kg or more, up to 200kg. At this weight, you can pull the brake at maximum level and you have no chance to achieve any blocking. Here comes in the good design of a Long John: the load sits behind the front axle quite low and the load balance is much more towards the front compared to a normal bike.
So, my final verdict: an invention which will be expensive, makes the bike more complicated and could yield in higher maintenance efforts (especially on tour), but does not add any benefit.
p.s. the bike at their promo picture would have gained much more from a bigger rotor, a heavy duty brake and a fixed fork instead of some KI-tech toy.