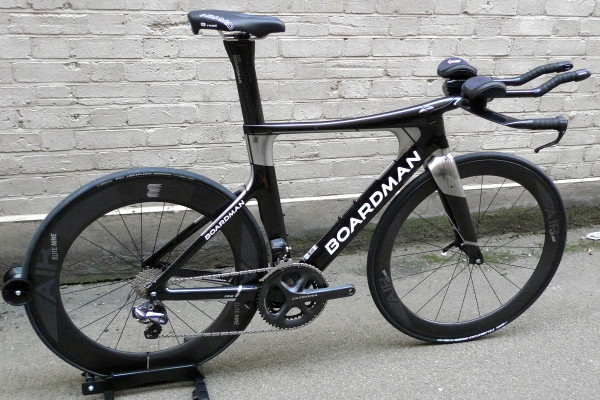 Chris Boardman’s racing pedigree came from riding into the wind on the track and in the time trial, and his bike company certainly isn’t ignoring those disciplines in development. Last week we brought the highlights of Boardman Bikes’ new #RideTogether rebranding and their new Endurance Road carbon and titanium bikes. But Boardman earned the nickname The Professor for his detailed technical approach to equipment and training, and that shows through more on the aero bikes.

The company’s 2016 Aerodynamic Road line updates the super fast TTE, the more affordable ATT, and the aero road AIR. On the track, an all new carbon TRK takes a big step, replacing its aluminum predecessor. Not to be underestimated, the focus on a methodical approach to racing comes through with news of the development of a Boardman Performance Center that will give the regular cyclist access to physiological and performance analysis, including affordable time in an all-new cycling specific wind tunnel to be built in the UK. Check out the details after the break… 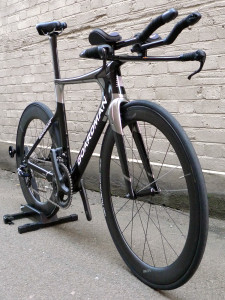 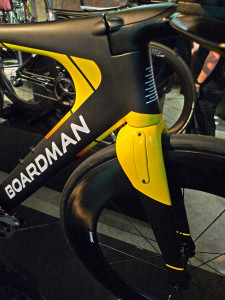 Boardman’s premier TTE time trial bike gets a wider three-bike range for 2016 and a higher spec at the top with the same Signature series we saw in the Endurance sector. The bikes use the newly refined Boardman T9 full carbon, tapered steerer fork with integrated TRP brakes and 100% internally routed cabling for both electronic and mechanical drivetrains. The TTE also uses Boardman’s AST – Aerodynamic Surface Treatment – which is a series of small stick-on tape strips that break up air flow across the frame’s tubes and results in even lower drag numbers for the new bike. Interestingly enough the thickness of this tape has had a huge impact, as their early 0.5mm thick strips had half the drag reduction of the final 1.25mm tape.

The TTE is available as a complete bike or as a £3300 frame kit, which includes the 1250g frame, T9 fork, headset, aero seatpost, and integrated aero bar/stem cockpit combo. Boardman also introduced a new wide line-up of house-branded wheels for 2016 to better deliver value and performance (wider, lighter, and deeper at the same cost as other OEM wheelsets) on many of their new bikes. The new wheels are also being offered aftermarket through Boardman dealers. 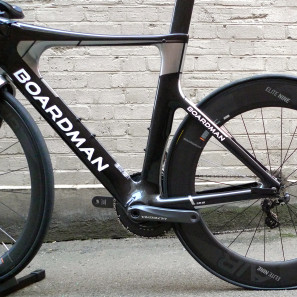 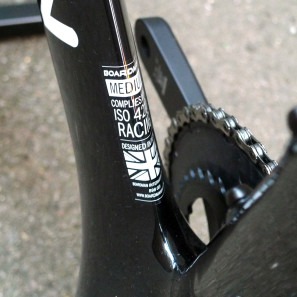 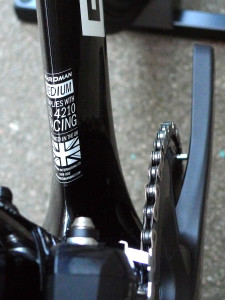 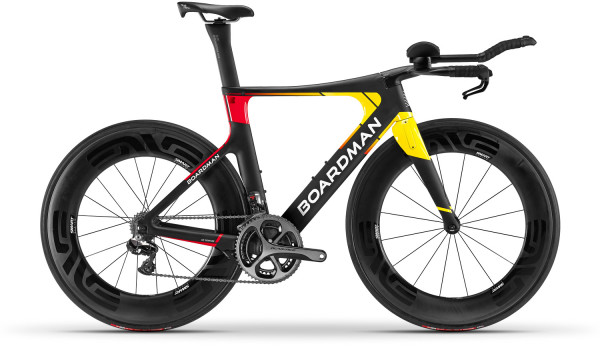 The top of the line TTE Signature edition sells for £9000 in its signature livery (also available as a £3500 frameset, with bar/stem and post.) It gets spec’ed with a no-compromise Dura-Ace Di2 groupset and Enve SES8.9 85/95mm carbon clinchers laced to Chris King R45 hubs. 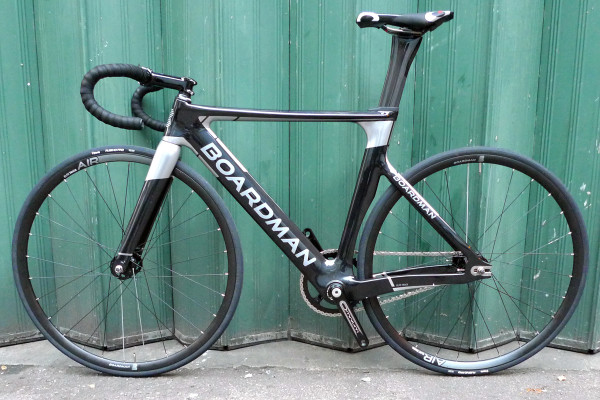 On the velodrome side, Boardman is introducing a new carbon TRK as either a £1400 frame kit (frame, fork, headset, and aero carbon seatpost) or the £1800 TRK 9.8 complete. The bike takes a big step over the previous aluminum track bike, and looks to make big improvements in both stiffness and aerodynamics. 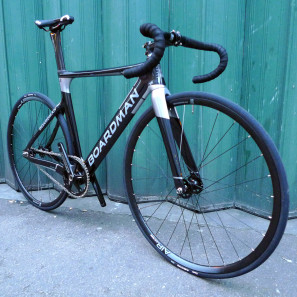 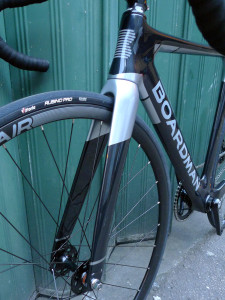 The TRK 9.8 carries a lot of design cues from the Aerodynamic Road line. With the cleaner cable-free setup of a true track bike, the TRK is essentially a repurposed version of the ATT, with tighter clearances and a narrower profile for track spacing. It also uses a purpose-built, full-carbon, tapered-steerer track fork for maximum stiffness and quick handling. The bike’s seatpost uses Boardman’s 4-point aero design that allows adjustment from an effective 76-79° seattube angle to suit individual fit and setup. The complete bike comes built up with a Truvativ Omnium crankset, aluminum bar and stem, and a 28mm deep aero shaped aluminum AIR Elite Track wheelset for that oval riding experience. 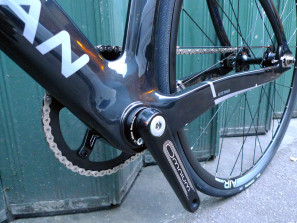 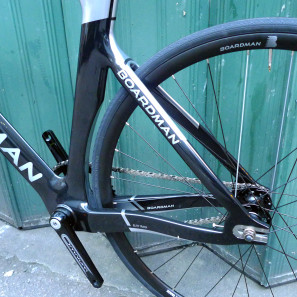 The TRK frame uses a PressFit30 bottom bracket to incorporate an eccentric mount for the GXP crank, allowing the bikes geometry to be dialed for different racing styles. While all of the other new Boardman bikes are available from dealers by the end of this week, the carbon TRK 9.8 is slated to show up in shops in March 2016. 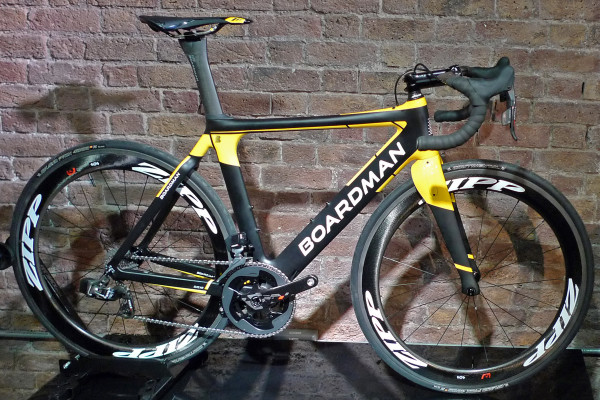 On the road the Boardman AIR frames carry over mostly unchanged, but with the new branded graphics. The bikes do get a noticeable update though, now being built up with the new aero T9 fork from the TTE with its integrated TRP brake. Spec-wise most of the bikes also incorporate the new Boardman AIR series wheels for higher value, so that money can be spent on premium drivetrains. The AIR is available in six complete bike configurations as well as two frame kits, the £1700 AIR 9.8 frameset (frame, fork, headset, and aero seatpost) and the £1900 Signature paint job frameset. 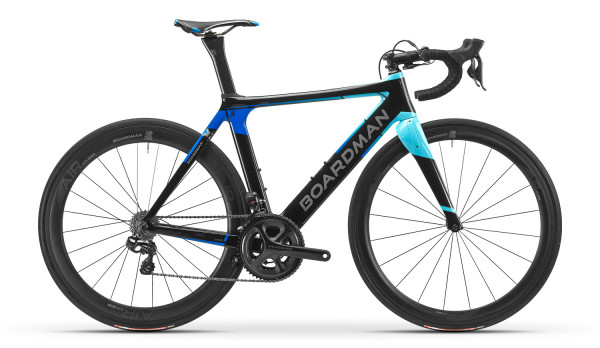 This black and blue AIR 9.4 retails for £4000 with a Ultegra Di2 build and Boardman’s 45/55m deep AIR Elite Seven carbon clinchers. The black and yellow AIR 9.9 above sells for £6500 with a set of Zipp 404s, Zipp bar and stem, and is one of the first bikes to market with SRAM’s new Red eTap groupset. 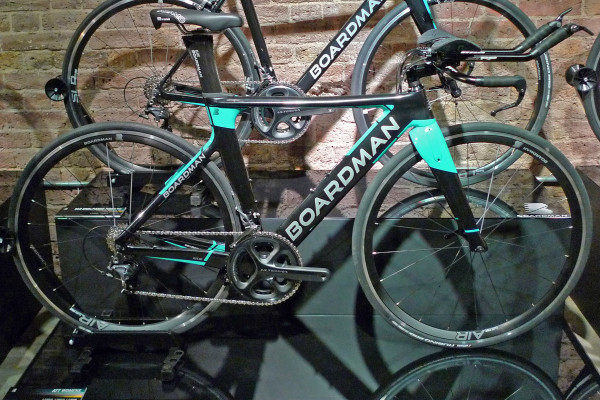 The AIR TT gets renamed to ATT for 2016, and that is the bulk of the changes other than paint and specification. One small change is just how the women’s bikes are denoted. The same sizing carries over from the previous generation of bikes. And while Boardman doesn’t use women-specific geometry, they do offer the bikes down to extra small sizing to fit all smaller rider. Now the women’s bikes get their own distinct line-up, with a single spec for each bike and a unified black and teal color scheme. But the smaller sized frames are also available in each of the regular bikes to both men and women to meet everyone’s fit needs. This ATT Womens offers a solid aero value at £2800 with a mechanical Ultegra build and AIR Elite Five wheels. 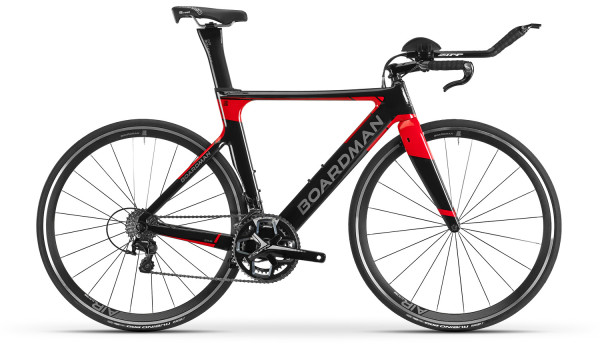 Specs improve for better value with the ATT, again party due to the selection of Boardman’s house AIR wheel line-up.  This black and red ATT 9.0 sets the entry level at £2300 with a mixed 105 drivetrain and the AIR Elite Five wheelset. The line tops out at the £3600 AIR 9.4 with Ultegra Di2 and the same alloy wheelset, with the thinking that riders with higher budgets will go for the new TTE platform. An £1800 frameset is also available for riders looking to build up their own bike or replace a less aero TT frame. 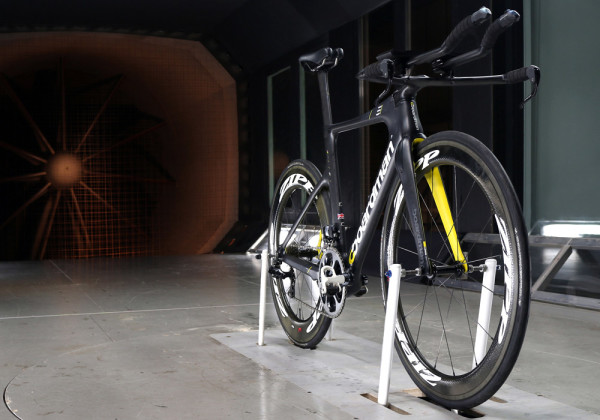 The announcement of the new Boardman Performance Center was something that Chris Boardman spoke about to me with a lot of emotion. After more than a decade at the top level of sport, Boardman spent a lot of time dialing in his position on the bike and the aerodynamics of his bikes. He truly appreciates the value in spending time in the wind tunnel but is not happy with how scarce the availability and how expensive that time is. He envisioned this Performance Center as a place for every cyclist to be able to come and get in the wind tunnel for an affordable hour as needed, but also to have access to sports professionals to dial in fit and form from a physiological perspective. The new wind tunnel they are building will be cycling-specific, designed based on Boardman’s own experience in wind tunnels across Europe, and aims to be affordable enough for multiple trips a year. Boardman spoke of needing to repeat tests in the wind tunnel for realistic results and see the new Performance Center as a way for both his company and amateur cyclists to reap those benefits.

The upcoming Boardman Performance Center is promised to be “the best, most accurate wind tunnel for cyclists” and in addition to the tunnel and performance labs, will include a Boardman retail store and the new Boardman HQ and R&D facility. Planning is at an advanced stage, but final details like its exact location were still to be announced, although at backers Halfords’ recent corporate meeting it was announced to be ready to open sometime in 2016. We’ll keep an eye on more news as to its location, opening, and costs to visit.

Yes, Fignon was The Professor for his spectacles. I have heard Boardman referred to similarly, however – he was certainly the most studious when it came to equipment exactness, including insisting on Mavic Zap electronic shifting on his TT bikes because he felt it gave him advantage to shift instantly without any physical effort (Lotus 110s had difficult cable routing). And look, now everyone uses electronic!

I hope their QC has improved….

@PV I think you’re right. The branding looked better in lower case, in my opinion too.