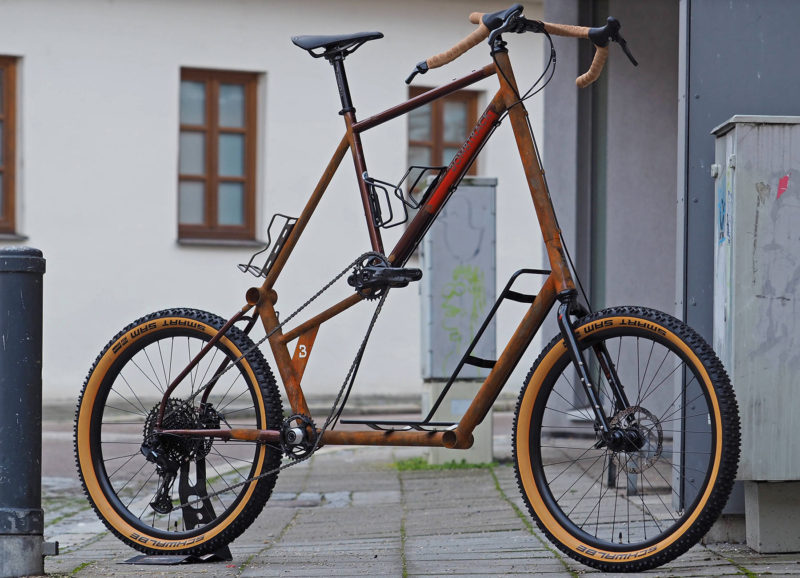 Bombtrack Bikes has a YouTube series called House Blend where they highlight unique builds of their no-nonsense bikes by some favorite independent bike dealer shops around the world… and the latest project is a doozy! The product of the creative mind & skilled torch of Dropbar Bikes owner Harald Kinzel, this steel Beyond² might just set a new higher bar for drop bar adventure gravel touring…

The first question everyone should ask when they see a tall bike is probably… Why? 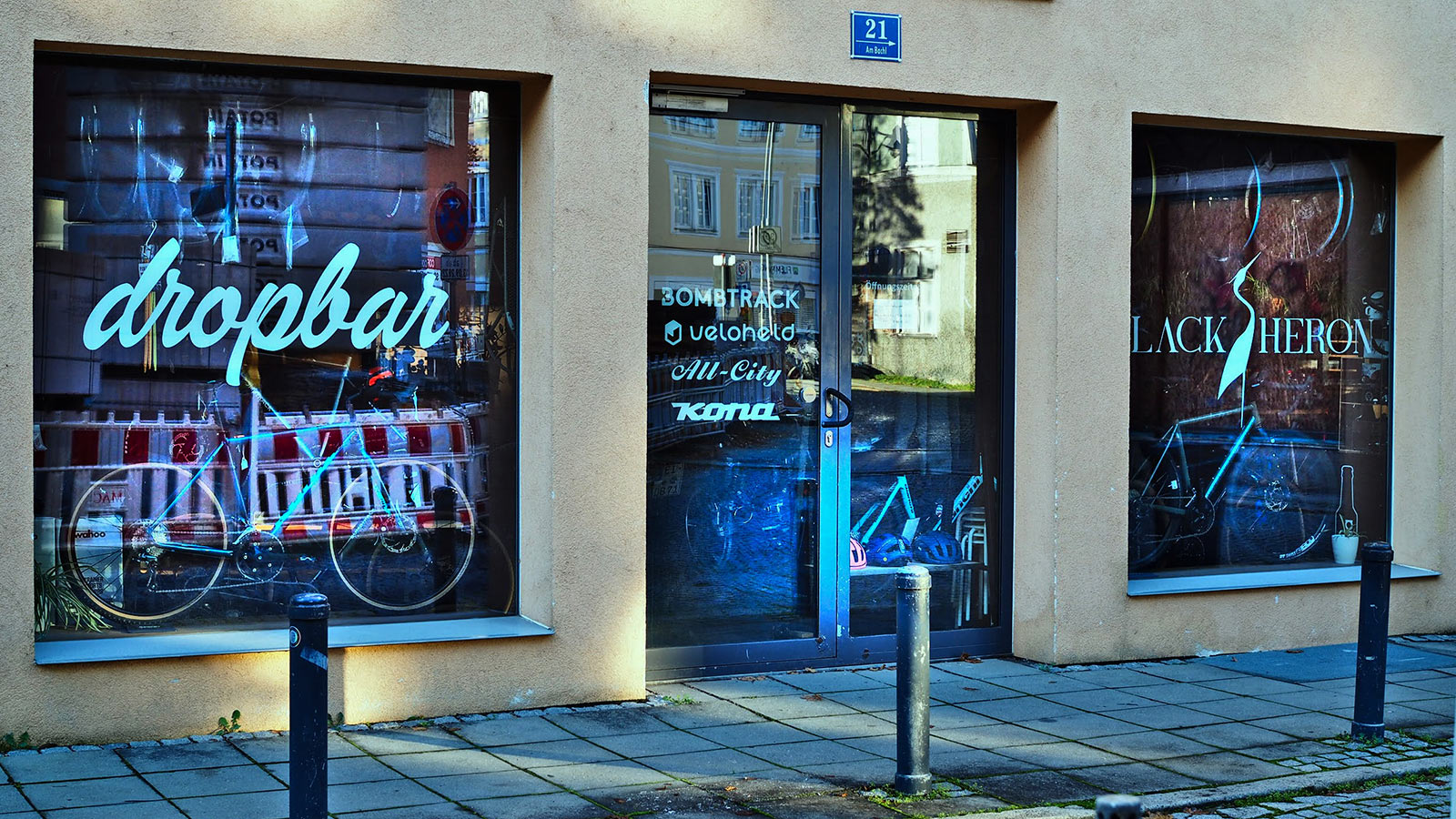 And that’s where Dropbar Bikes actually has a good, sustainable answer. 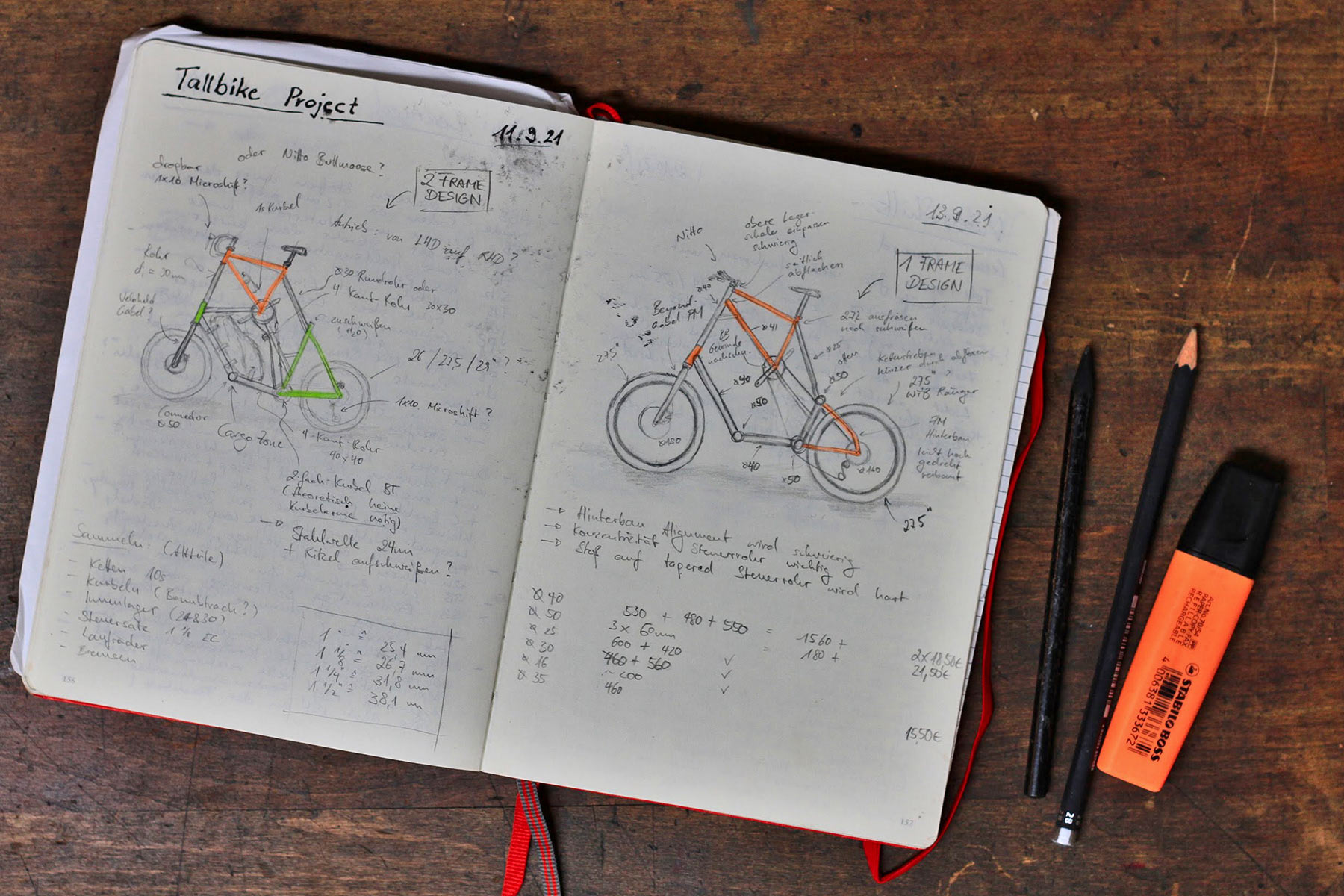 Harald said he had already had a tall bike fabrication project in the back of his mind, and then a customer came in following “a bad crash which left the frame severely bent in the rear end”. So, Harald set out to give the poor bike a second life. Remember kids: reduce, reuse, recycle. 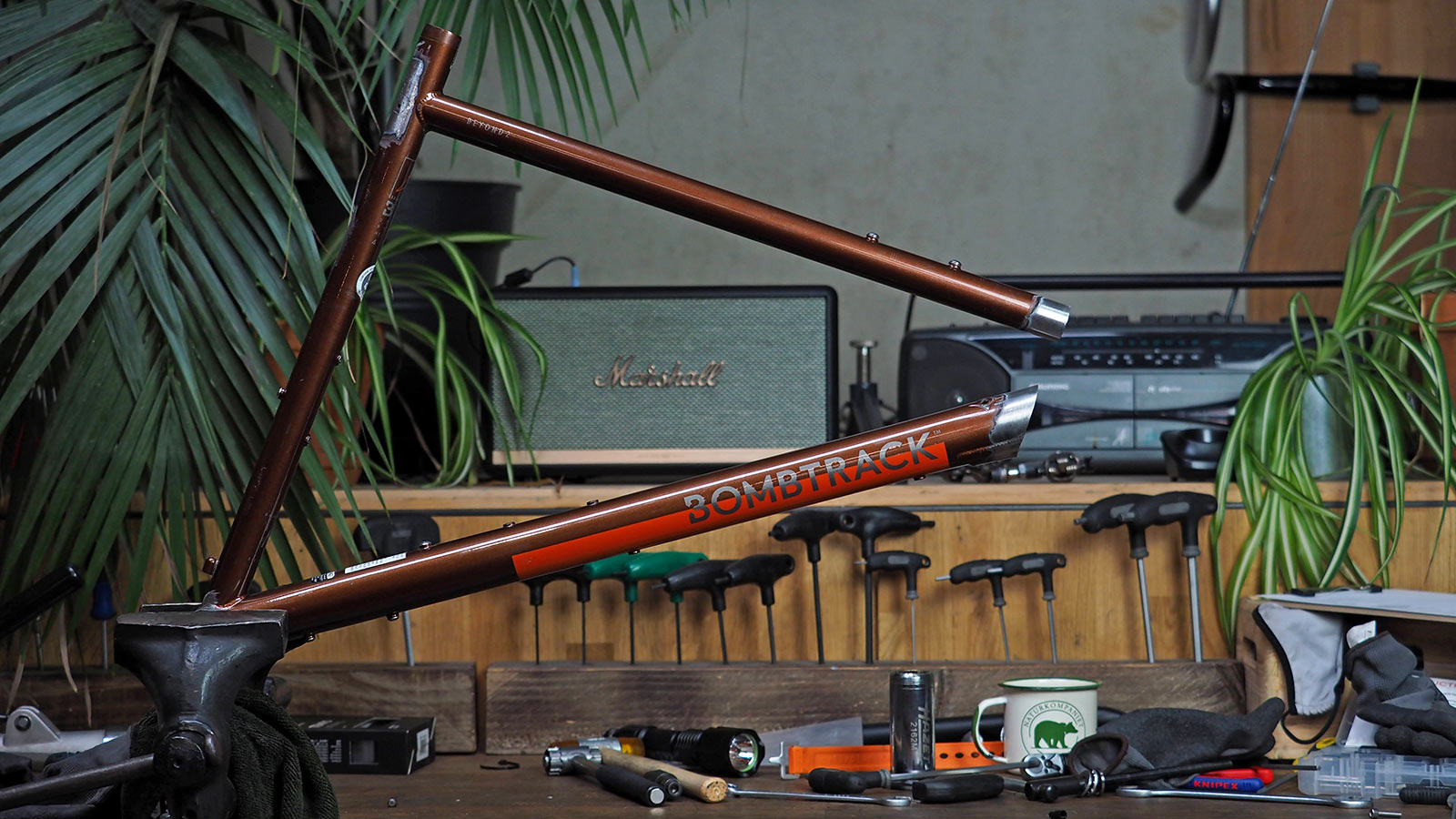 He ordered a replacement Bombtrack frame to build back up for the customer to get him back on the bike, and bought the totaled frameset off them for a few bucks to go under the knife. Harald salvaged as much of the bike as he could – separating the front triangle from the headtube and prying the stays back into a workable shape. 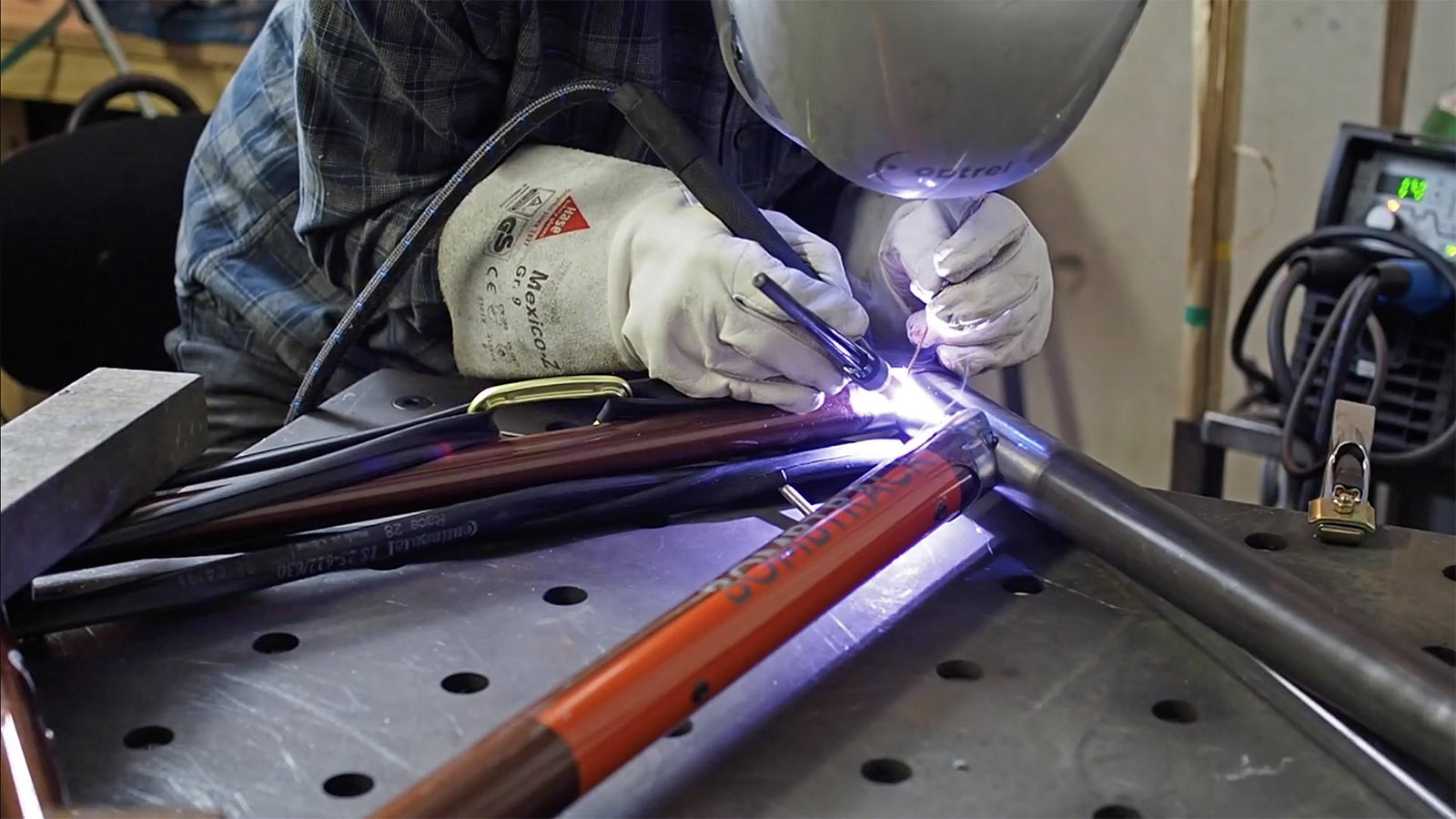 Then he ordered a bunch of standard chromoly tubing to re-connect the parts around what essentially amounted to 3 new press-fit bottom brackets, only one of which serves as an idler now.

Harald regularly offers more minor steel frame repairs out of his shop. But this project turned out to be about the most complex he’s worked on for a while. It pushed his welding table to the limits to get the tall bike straight, especially returning bent rear triangle back to a symmetrical shape. 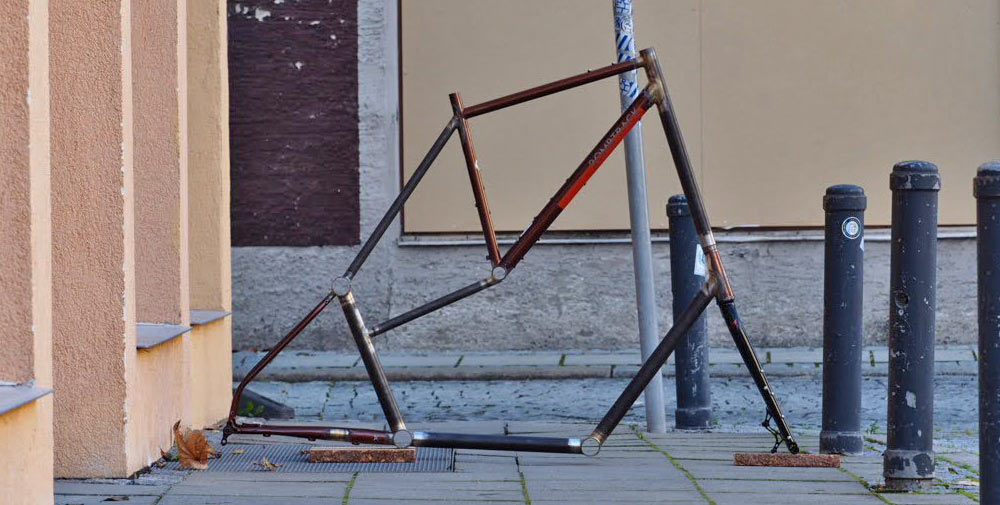 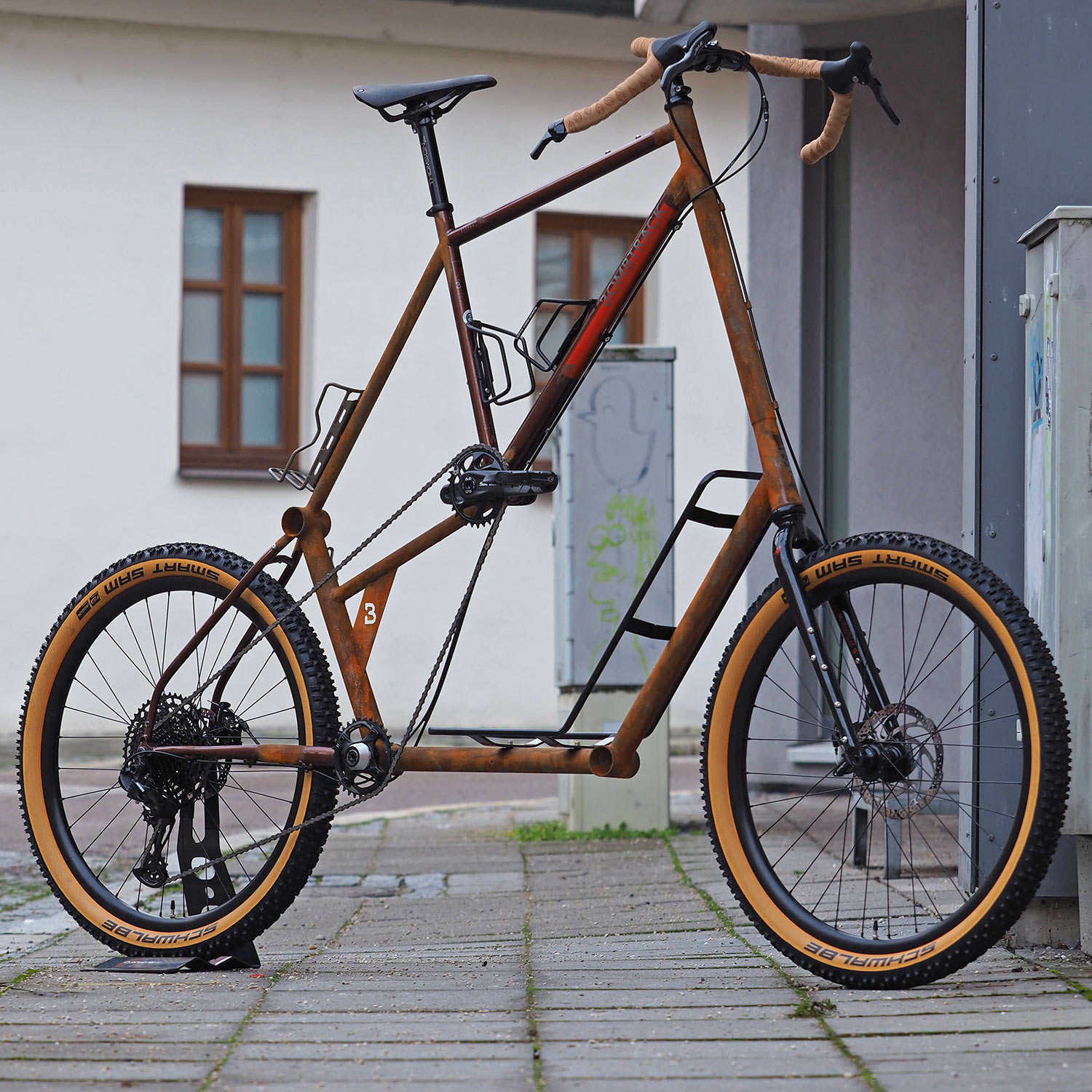 The donor bike started life as a metallic root beer Bombtrack Beyond 2 in size medium, and surprisingly a lot of that bike still remains. 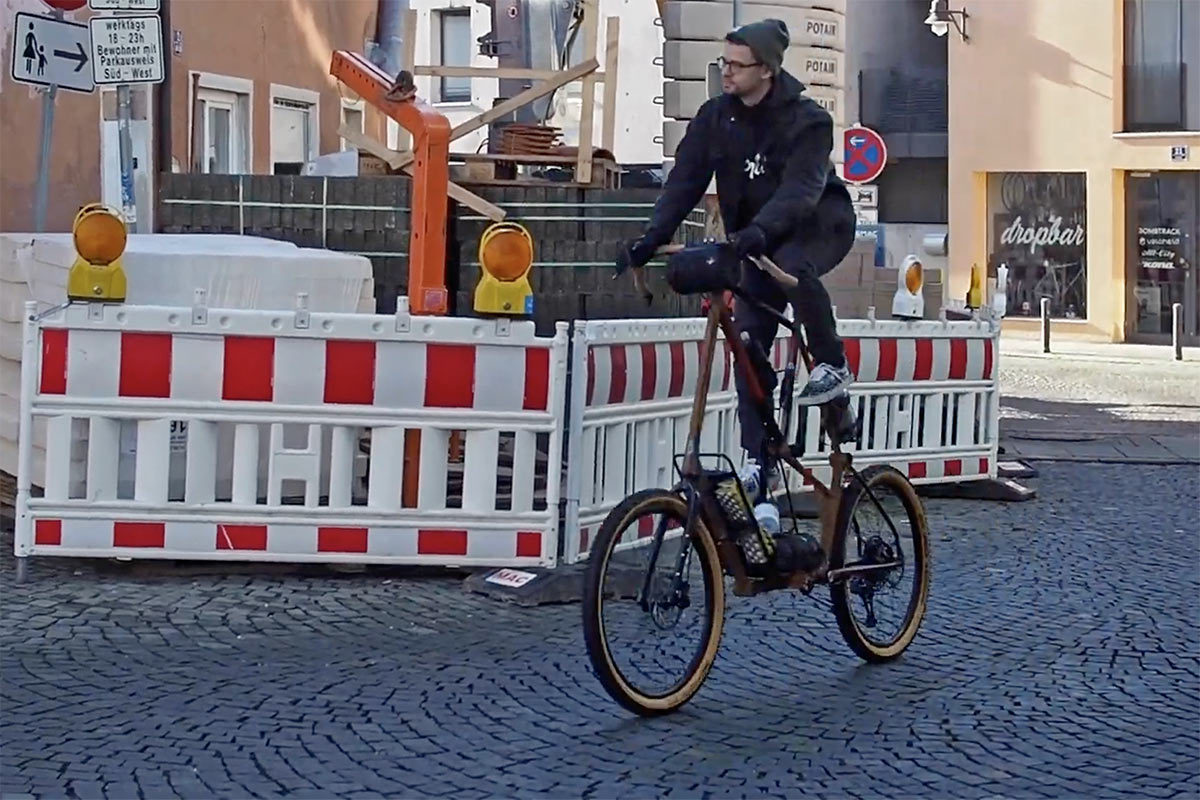 Harald tells us that this second incarnation Beyond² Tall bike did shift its geometry a tad in the chop shop, dialing back the Reach to just 355mm and Stack to 595mm. That was good in the end as Harald at 170cm tall is a bit shorter than his customer, so would have likely ridden a small; and the more upright position works well when that upper bottom bracket is something like a half meter higher than usual. 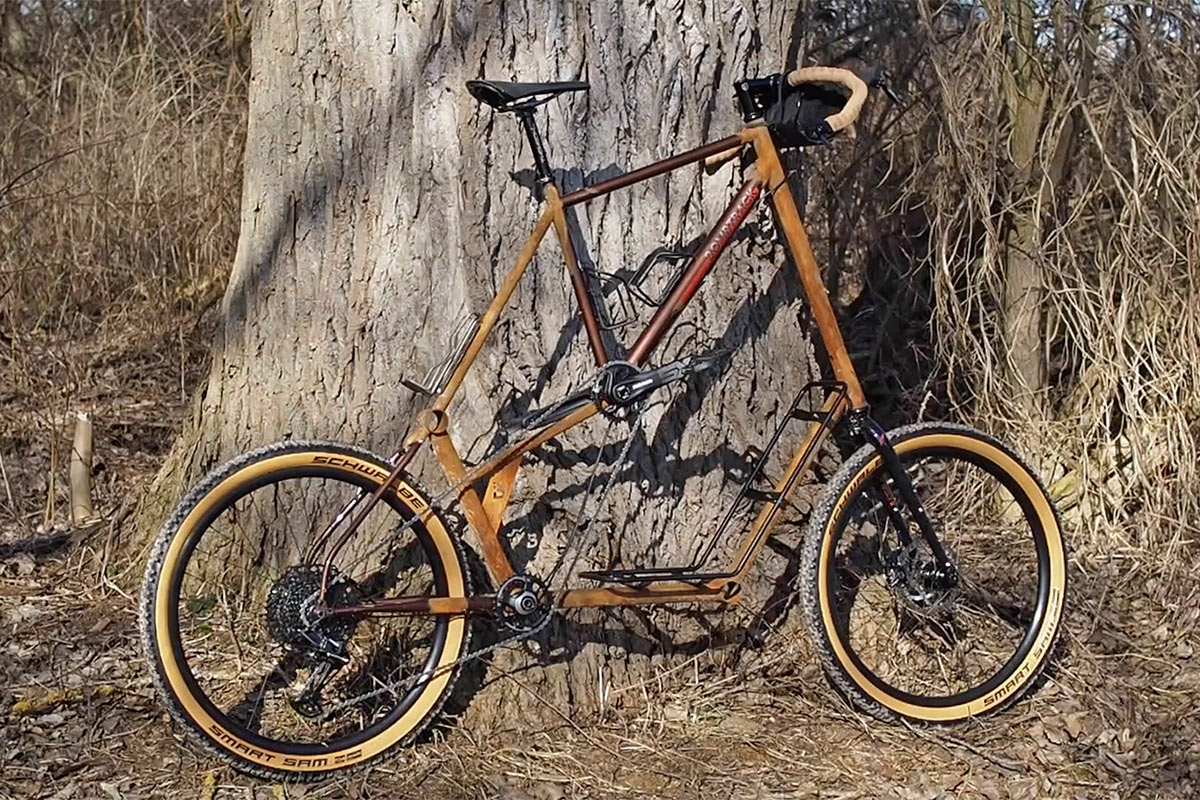 The bar height is 1450mm off the ground and the wheelbase is 1470mm. Compare that to about 950mm & 1065mm, respectively for the stock Beyond. Half a meter higher and 40cm longer.

It is a one-off bike though, so don’t expect it in 5 sizes next season in the Bombtrack catalog.

More Tech Details, because why not! 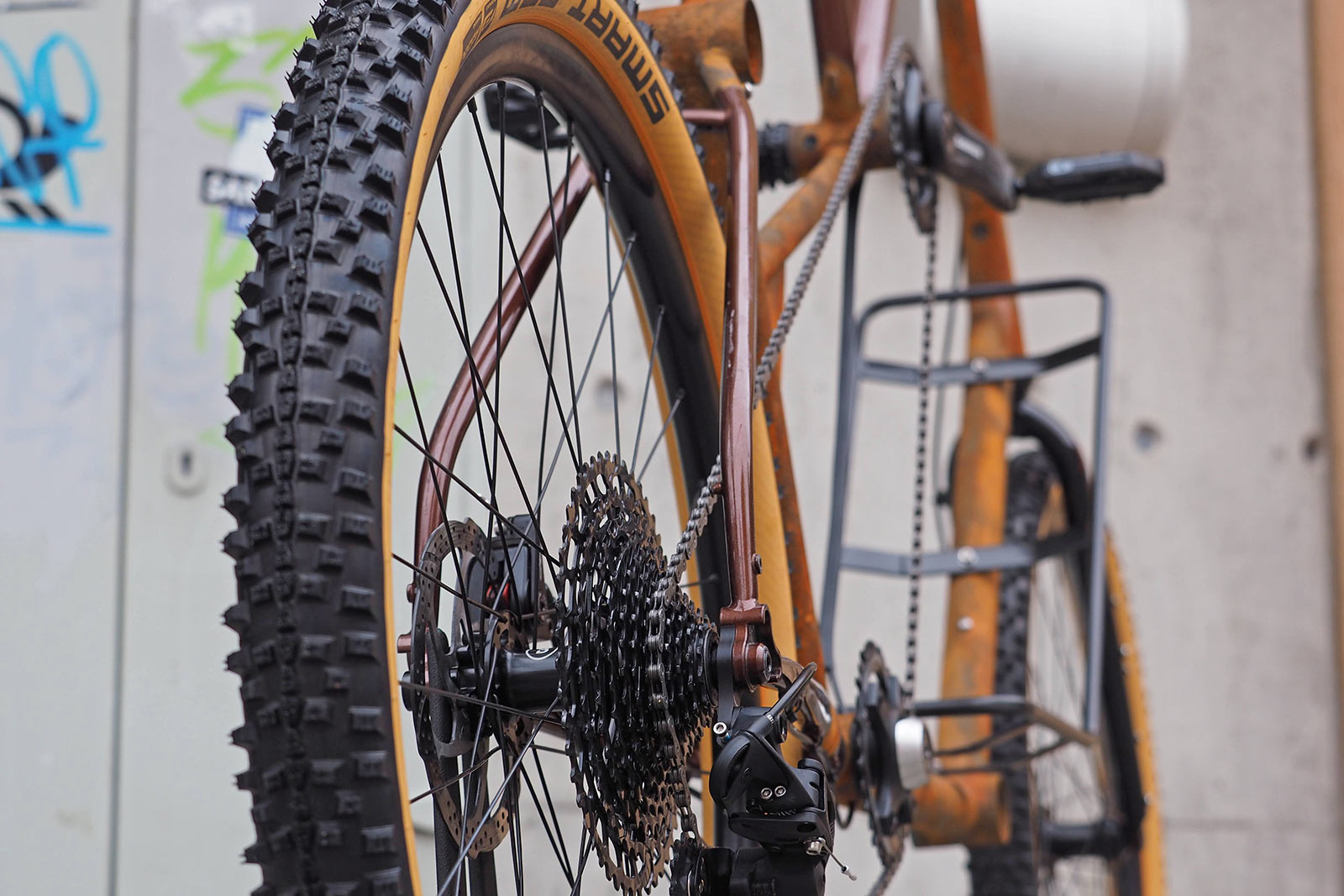 Tire clearance is Bombtrack Beyond stock though, at 650 x 57mm or 29 x 2.1″. Harald built it up with the wider, smaller 27.5 x 2.25″ Schwalbe Smart Sams for the off-road prowess that an adventure bikepacking tall bike deserves. 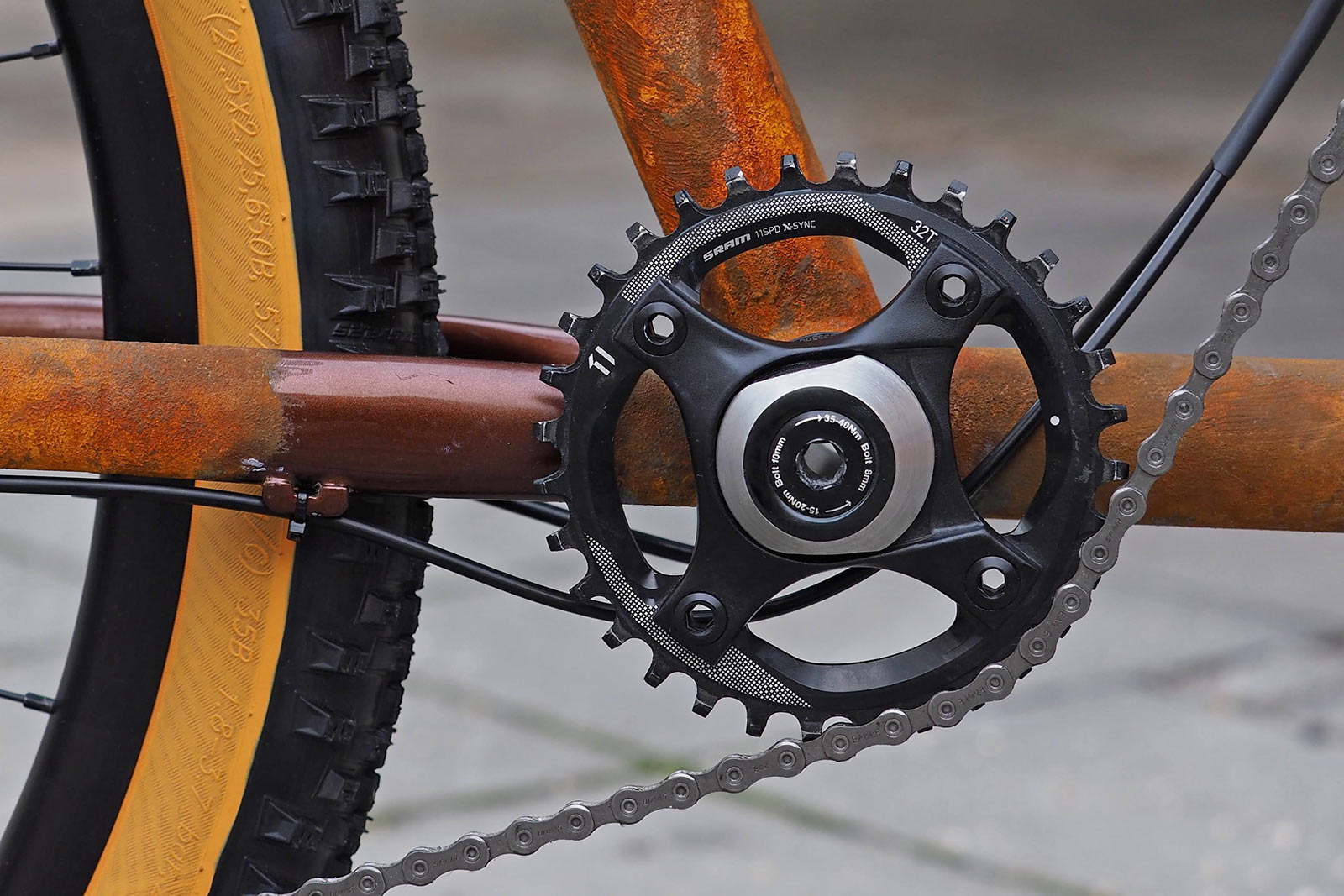 It also sticks with a BSA threaded bottom bracket up top, joined 800mm diagonally down below to a new PF30 BB, 450mm from the rear axle.. that’s a lot of chain. The lower BB serves as an idler to maintain functional chainline for shifting. And Harald repurposed an older alloy Bombtrack crankset whose pedal threads had been stripped out. Chopping the crankarms off and whittling it down on the lathe gave the tall bike a modular bolt-on spider for another narrow-wide chainring. 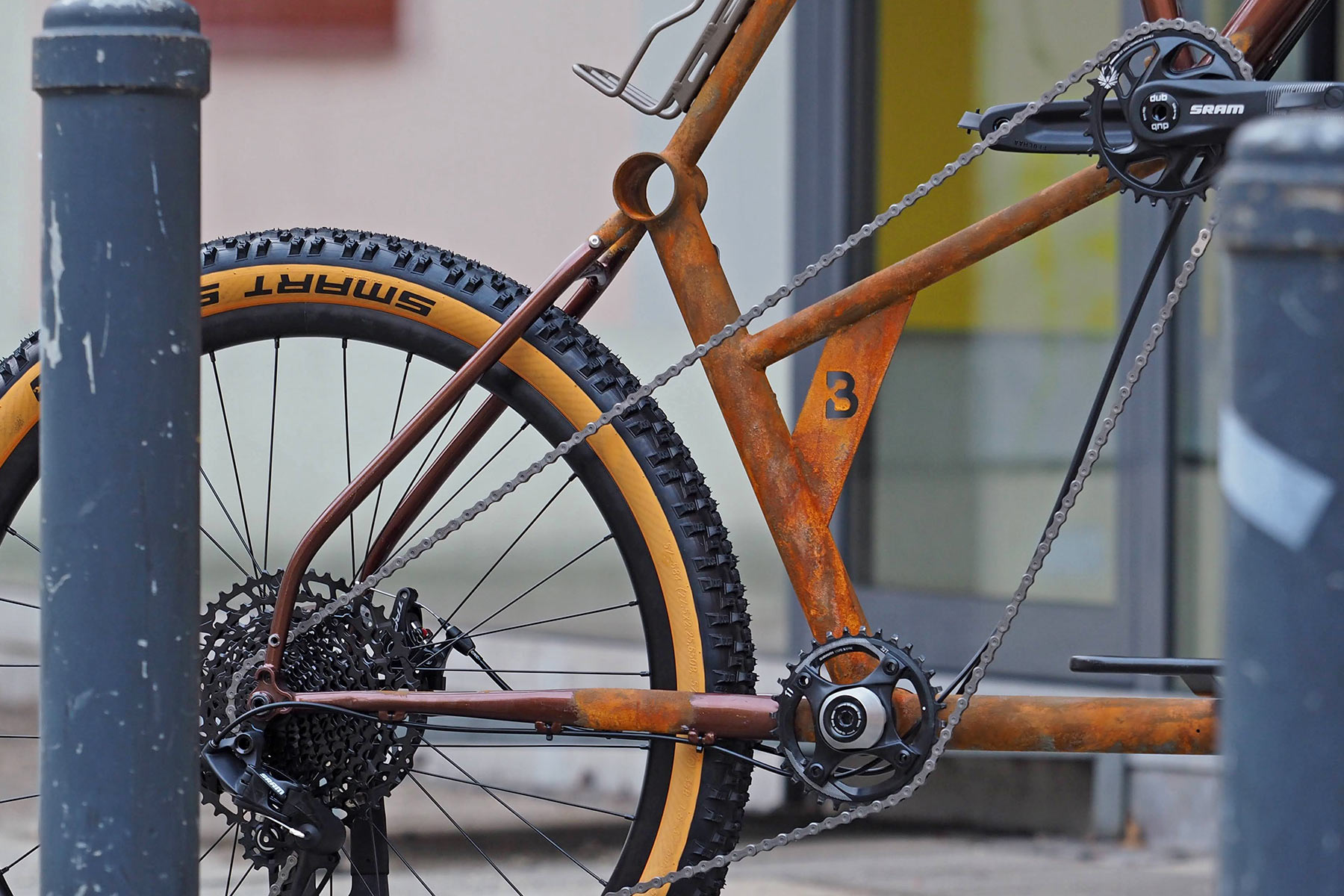 Rest of the spec-wise, the Dropbar Bikes project was all about solid, affordable performance.  It gets a SRAM SX Eagle 12speed drivetrain operated by barcon shifters and TRP dropbar levers for the Spyre mechanical disc brakes. 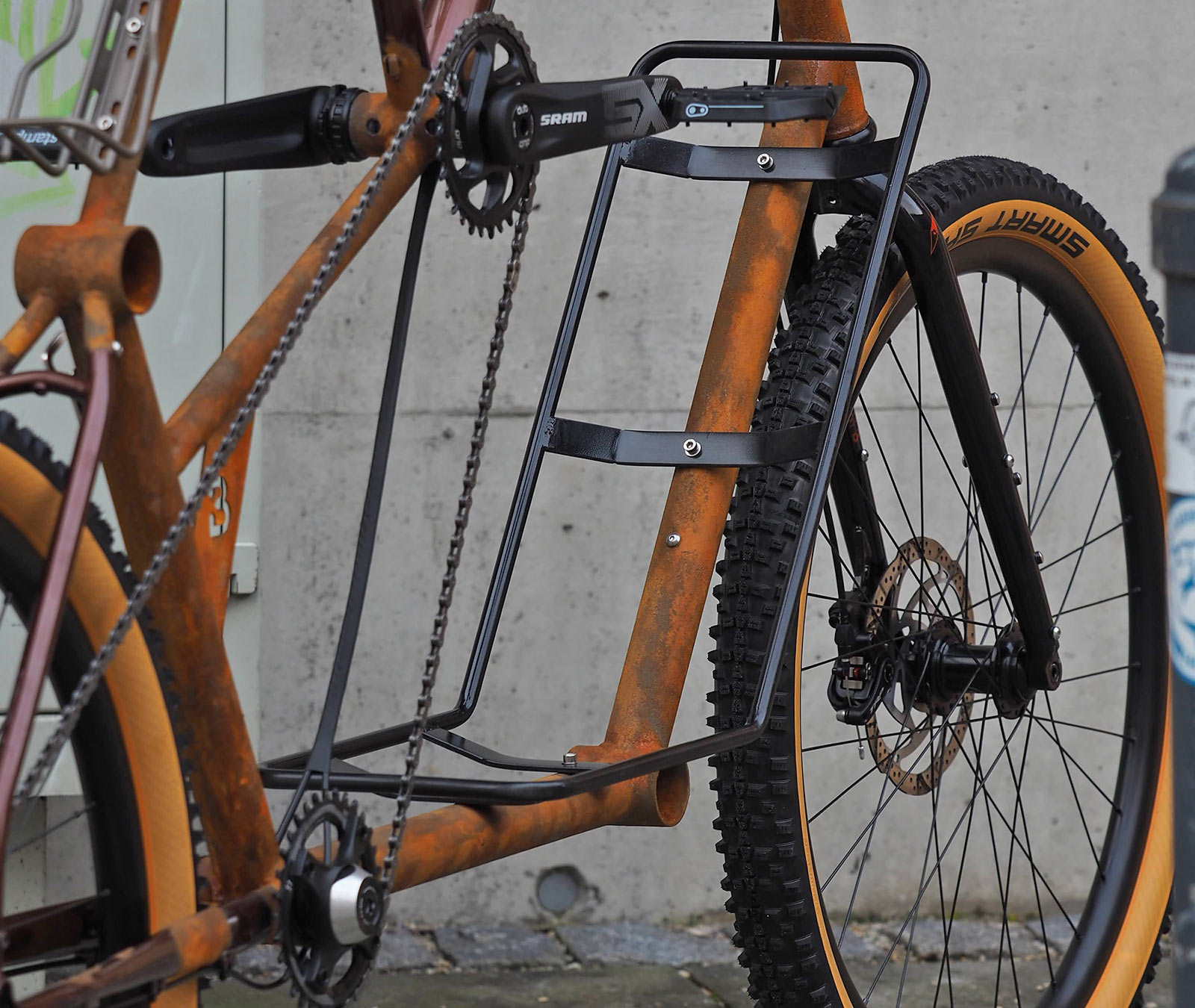 It’s an adventure gravel bike even if it is a franken-tall bike, so it needs all the hauling capability too. Dropbar custom fabricated a luggage rack for the lower tubes, plus an extra cargo cage on the extra rear mono stay and conventional bottle cages in the mainframe. It’s still a Bombtrack too, so it has a set of toptube bag mounts, anything cage mounts on the fork, and full front & rear Rack & fender mounts. And a direct-mount bottle opener on the non-driveside seattube stub. 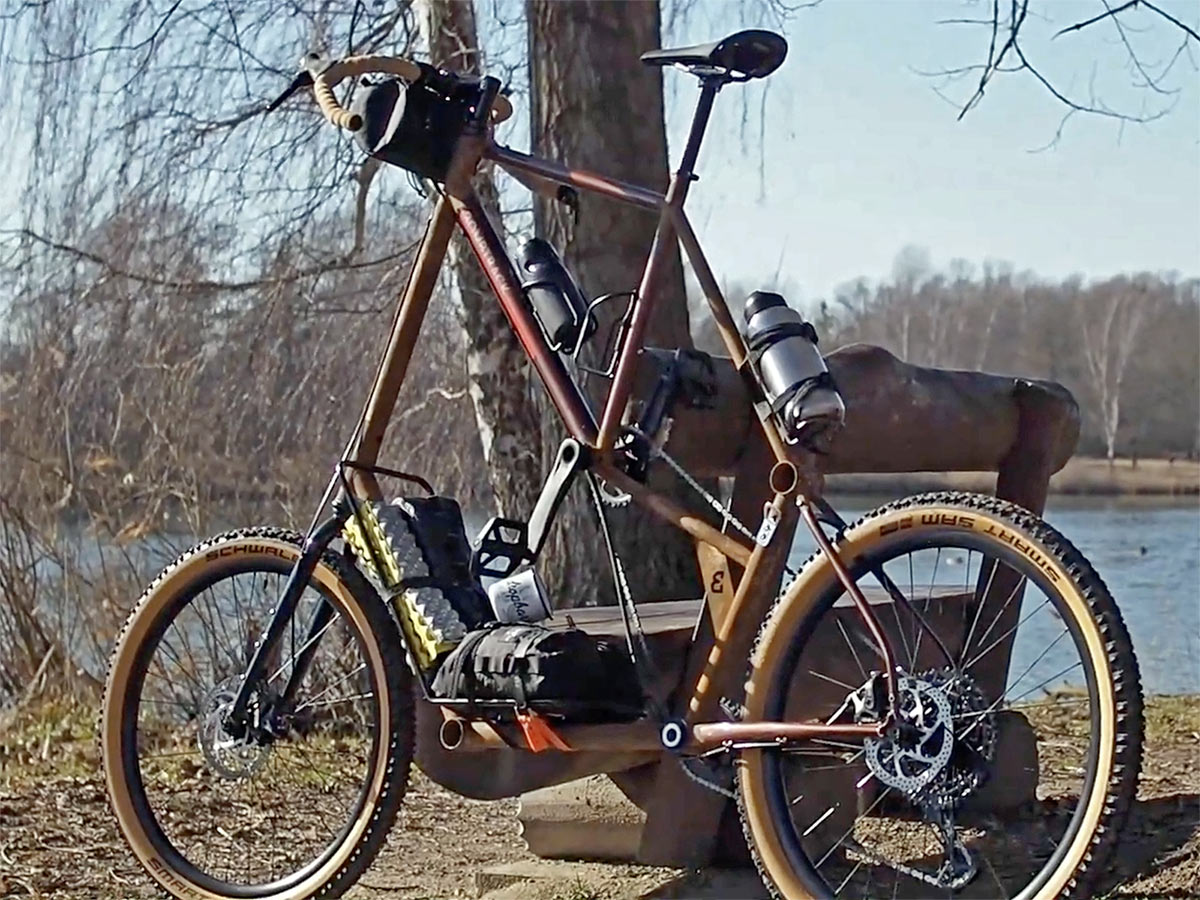 And Dropbar Bikes also has its own custom bikepacking bag brand made-in-house, so the Bombtrack House Blend gets a Black Heron canister Handlebar Bag and a couple of Fork Pack roll-top stuff sacks that tuck nicely into that lower rack tray.

Wait, was this at Burning Man?

Cool bike. The storage underneath is cool.
I have seen a few tall bikes in my life. The cleanest one was one I saw at a circus. It looked purpose built from start to finish, as opposed to using old frames.

Thx so much Cory, your article describes the bike very well and makes me even more proud of the project! Keep up the great work!

cool, but as a end push a loaded bike more than anything, this would be nightmare out in the wild