Watch out bike thieves, this bike is armed with a Boomerang. No, not the wooden tool/weapon that supposedly comes back. This Boomerang is a cellular equipped GPS device you attach to your bike. There have been a lot of different products that were meant to keep your bike safe and track it in the event of theft, but few of those actually include their own cellular connection. The Boomerang is connected by Verizon Wireless which means that it has much better range than a bluetooth connection. Once you purchase the Boomerang, there is a quarterly fee of $14.97 ($59.88 per year) that is paid directly to Boomerang who manages the actual cellular contract. In addition to the cellular connection, the device includes a GPS tracker, motion sensor, and other electronics to alert you if the bike is moved. The motion sensing alarm will go off if someone tries to move the bike without your knowledge, and you’ll also get an alert on your cell phone that your bike is being messed with. If it’s actually taken, it will start to send GPS coordinates so that you can track it and hopefully retrieve it.

According to Boomerang, visible trackers are more of a theft deterrent than internal trackers, and the cell signal wouldn’t be as strong if it was in the frame so it’s mounted externally. The Boomerang is mounted to a bottle cage mount with anti-theft torx bolts that are long enough to mount a water bottle cage on top if you’d like. 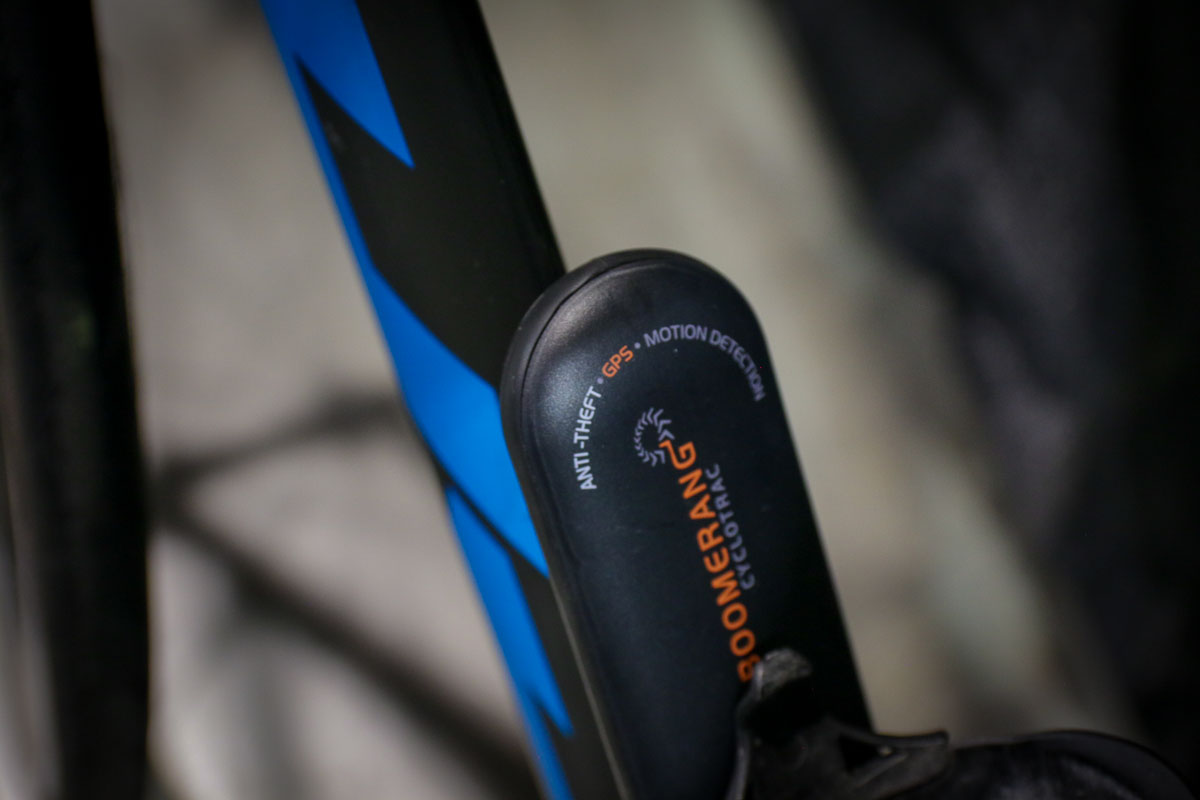 The external positioning will also help you recharge the device which you’ll have to do at least once a week. Boomerang claims that the device will last for up to 10 hours when in motion (gathering data and sending it to the cloud), and 3-4 months while in sleep mode. Charging takes 4-6 hours.

In addition to anti-theft, the device could be useful for rental fleets as it allows you to set geo fences to keep tabs on bikes, and track ride data. That ride data tracking can also be used for personal rides with distance, elevation, number of rides, calories, and even carbon offset and gas money saved metrics.

The device weighs in at 142g, and each Boomerang sells for $155. Note that there is a separate GSM version for riders outside of the U.S.

But a 33-piece Security Torx bit set is $6.49 at Harbor Freight. So the thief just unscrews your anti-theft device before walking off with the bike. If folks won’t stop thieves using an angle grinder to cut your lock, they sure aren’t going to stop them for using a bit driver.

Hard pass on this for me.

i
Reply to  Matthew

I don’t know how many “average crackheads” you’ve actually met. I’ve never met one that carries a ratchet around, knows what a torx bolt is, nor would make a trip to Harbor Freight to buy a bit set just so they could steal that one bike that has this thing, and is presumably locked with something else anyway.
Plus a drop of the right kind of loctite would make it pretty difficult to remove without a heat gun anyway.

One stolen bike is the same as the next in terms of crack money, a little deterrent could easily steer a thief to someone else’s bike. And really, that’s the goal of any security device.

record11
Reply to  i

So, by design this device will NOT stop a crack head….they wont give it a second look. From there, even IF you know where it is….lets see the police response when you say “My bike is right at this X on the screen”. I am betting a doughnut is a far higher priority.

Fred Gravelly
Reply to  i

You shouldn’t assume that bike thrives are crackheads

They do at least have the little dot in the middle which makes them impervious to the standard multi tool, but yeah, the bits aren’t hard to find.

Still prefer something that is seat post mounted. The average crackhead stealing bikes will not read bike rumor and know what this is they’ll probably remove it promptly anyways.

It’s too funny… Let just put “Anti-Theft-GPS-Motion Detection” all over it!

Doesn’t seem smart to label what it is so front and center. A savvy enough thief would remove it the second he took one look at AntiTheft GPS

If they could make it much smaller and hidden, like in the seatpost, they’d be onto something.

except those types already exist, theyre trying to fit in to another niche, but havent considered why nobody else is using this location for a security tracker….. duuh

The case looks like plastic or iphone thickness aluminum. Just smash the battery in the device or case using some channel locks to disable it, then walk off with the bike and remove it later. Every self-respecting bike thief will most certainly have the correct channel locks to get this done in an efficient manner.

this would be a better idea as a ANT+ device housed in a seatpost. like power meters and HRM’s when the battery gets low you get a alert. take the thing out and charge it.

Foiled! Electrician Used A Snack Bag As A Faraday Cage to block GPS preventing it from working properly — especially the provision of regular GPS co-ordinate updates.

should have used a Velcro strap you might scratch the paint removing it, would lower resale value

My 2c, the stem/handlebar seems like a better integration point than the seatpost (especially if there is some kind of small display as well). A bike without a stem or handlebar is much harder to ride off with than one with the seatpost chucked away.

stick it in the end of a handlebar with the aerial under the bar tape/grips as carbon fiber is a good Faraday. and aluminum also does a good job of scrambling GPS signal…

what a stupid design, you could easily get a flat screwdriver under that to snap it off. its rather obvious what it is. Oh well their money not mine

Motion detector linked to a tazer device to electrify the whole frame and you’ll get my cash.