Playing with Legos or an Erector Set as kids, (and in many cases, adults), the satisfaction one gets from building something is no surprise. Now imagine getting to create something with your kids that becomes something they can actually ride. Infento has launched a Kickstarter for a life size Erector Set of sorts that allows a parent and child to build an assortment of pedal and push powered vehicles for kids from toddler to teenager…. with One. Single. Tool.

So if you’ve ever wanted to be able to experiment with the head angle on your child’s enduro scoot bike, check out Infento’s build kits and get creative! 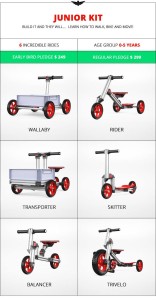 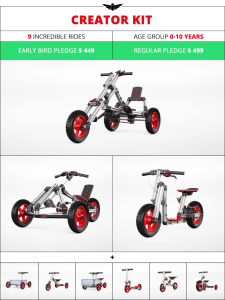 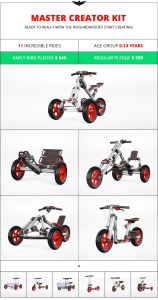 The first goal of Infento was to develop an Education Kit especially for schools to help give children a technical skill set. They’ve offered thier Education Kit since 2012 in schools in various countries and the enormous positive feedback from children and parents led them to market their construction kits to everyone through their Kickstarter Page. Their kits come in several levels starting at only $249, (Reguarly $299 after the early bird Kickstarter offer) that will suit children ages zero to 5, and some of the more advanced kits will cover the entire age range up to 14 and offer options for snow activities as well. 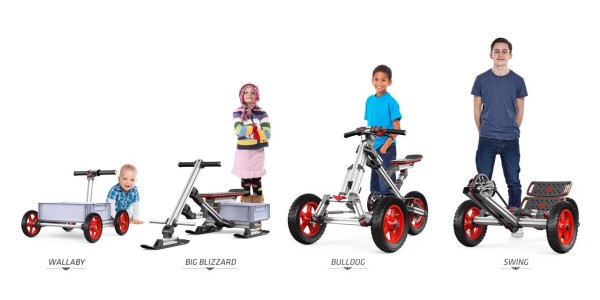 Infento has an instruction manual that shows you how to build 18 various constructible rides including a walker, scooter, tricycle, bicycle, go-kart, skibock, and more. The modular kit has endless possibilities by letting the child and their guardian get as creative as possible. 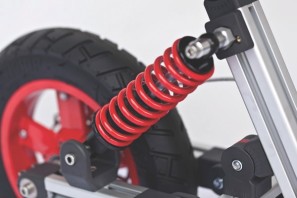 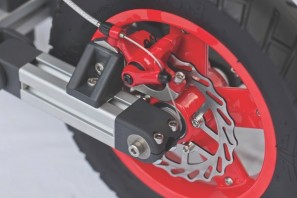 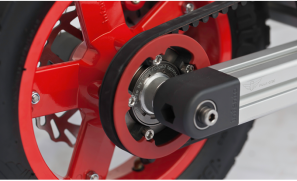 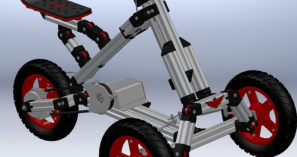 Infento’s kits are not only meant to be flexible, but are built to withstand the weight of 2 average adults and include several considerably high tech *to a kid* options including disc brakes, suspension, and a belt drive which is both lower maintenance and safer than a traditional chain and chainring. Scouting around on their Facebook page, there is evidence that they are looking into electric motor options as well.

For details on how to acquire one of their kits, check out their Kickstarter page.

There is no reason to cringe over “Legos” unless you’re on the LEGO payroll.

Keep pushing against that tide, it’s a steady job.

I think it’s a really cool project, but I’d be interested in finding out the weights of these kits. If my experience with extruded aluminum is any indication, I feel like these things would be rather heavy for a kid to manage. Hopefully not though. I wish I had this when I was a kid.

Kids are supposed to manage heavy bikes. The bike I used as a kid weighs 30plus pounds. I still have it there. That thing is an anchor, its so heavy for its size that is seems its made out of neutron star material. I had lots of fun on it as a kid and it never crossed my mind how much it weighed, i just rode it.

The heavier the bike, the less you have to run behind the kid! (or you could deflate the tires if they’re pneumatic)

I really like this stuff. Many people came up with modular kids bikes recently, but I thinks it’s one of the most advanced, and still reasonably priced.

The only weird thing is that I don’t see any real bike. Just trikes and balance bikes, nothing with 2 wheels and a crank. I hope it’s not because they handle in a strange way and are unstable if assembled as standard bikes…

@ Francois: I will ask as that did cross my mind, (this kit was just too cool not to cover), but when you start defining something as a “bicycle”, you then enter a whole mess of red tape regarding standards set by CPSC and ASTM as far as assembly, reflectors, etc. I’d be interested to see if a bicycle could be made out of it, but I believe this is likely the reason behind it. – Trey

Would totally buy such a kit for adult bikes & trikes. Why should the kids have all the fun?

The extrusions look like T Slots or 80/20. Either way, these solutions by Infento look solid. Plus, with all of the other brackets and connectors available for these type of extrusions, you could get very creative.

Nope, the plural of Lego is still Lego. It’s not a question of bad grammar, it’s just wrong.

I’m with Gunnstein- I want this in an adult size.

The definitive LEGO vs Legos ruling from the horse’s mouth:

“Using the LEGO® brand name
Please help us protect our brand name:
– The LEGO® brand name should always be written in capital letters.
– The LEGO brand name must never be used as a generic term
or in plural or as a possessive pronoun, e.g. “LEGO’s”.
– When the LEGO brand name is used as part of a noun, it must never appear on its own. It should always be accompanied by a noun. For example, LEGO set, LEGO products, LEGO Group, LEGO play materials, LEGO bricks, LEGO universe, etc.”

Cool kit. Hope it does not turn like the Jyrobike (another kickstart campaign)….which has dissapeared after people trusting in their idea and putting their money on it. Will wait till it turns into reality. But it looks promising….

Hello there! Thank you for your nice words about our product. To answer your questions:

This is from the FAQ on the Kickstarter page, talking about the weight:

The complete Junior Kit weighs 25 kilo, the Creator Kit 40 kilo and the Master Creator Kit 45 kilo. We don’t have a specific weight for each ride but we do know that every child we tested them on (hundreds of kids, because of our education kit) have no problem with the weight.

And to answer the question a real bike: we have a nice surprise in store this week that will answer this question :). So keep checking our KS page or sign-up for the newsletter and you will see what we are talking about.

we did not receive a direction booklet. Is it buried in one of the kit boxes?