Just a week ago Canyon debuted a new trail bike in their Spectral overhaul, but now they ratchet up the travel & gravity capabilities in the all new Torque. Developed together with Canyon’s pro freeride, enduro & downhill teams, the new 175mm travel Torque gets a suspension design inspired by its DH Sender sibling to take on the most technical backcountry mountain biking and bike park jump lines. The Torque returns a popular bike to Canyon’s line-up, almost as a downhill bike for mountain bikers who don’t race DH, back to the true spirit of freeride. Like the new Spectral, the new Torque mountain bike also gets both carbon and aluminum options – this time in two frameset versions – to bring this style of aggressive gravity bike to a wider audience. The 175mm travel linkage driven Horst-link suspension, matches to 180mm single crown forks to put it in the same category as a proper DH bike, even if it is much more trail nimble. The Torque’s suspension kinematics use the same 3-phase concept that was first developed on the Sender CF and then made it even down to the aggressive trail Spectral. That gives the bike that same sensitive start to its travel, transitioning to a supportive mid-stroke, and progressively ramping at the end to soak up the biggest hits. That means optimal traction no matter how rough the trails get, and enough reserve in the tank to eat up gnarly drops. Canyon says the new design makes for a completely new feel to the all-purpose gravity bike. The new shock & linkage layout features metric air shocks which have led to improvements in shock stroke through the increased bushing overlap & larger air cans. It also allowed their designers to get more standover on the bikes, and so that also means longer 150mm or even 170mm travel droppers on the bikes. But the Torque isn’t to be confined to the downhill race track, and wants to be shredded in all manner of gravity riding. Geometry wise, the Torque features more versatile, modern aggressive geometry. So while it is stable at speed, the long front & short rear remain playful on the ground and in the air. The Torque uses the same integrated cable channel under the downtube as the Spectral, that gives the clean setup of internal routing with the simplicity of external, and the added benefit of a built-in downtube protector. All of the bike’s suspension pivots get large industrial sealed bearings for long life, good durability, and ease of service down the trail. The 27.5″ wheeled Torque is available in four sizes S-XL in the carbon version, plus a fifth XS in the full aluminum bikes. The carbon Torque CF features a UD carbon front triangle mated to an alloy rear end. Canyon did this to maximize strength in the front end, where they could tweak the layup to get the best handling bike. Out back the 6066 aluminum rear end is better suited to taking the rock strikes and drivetrain stress for max durability over the long term. Plus the alloy stays make it easier for riders to assess damage after repeated impacts. 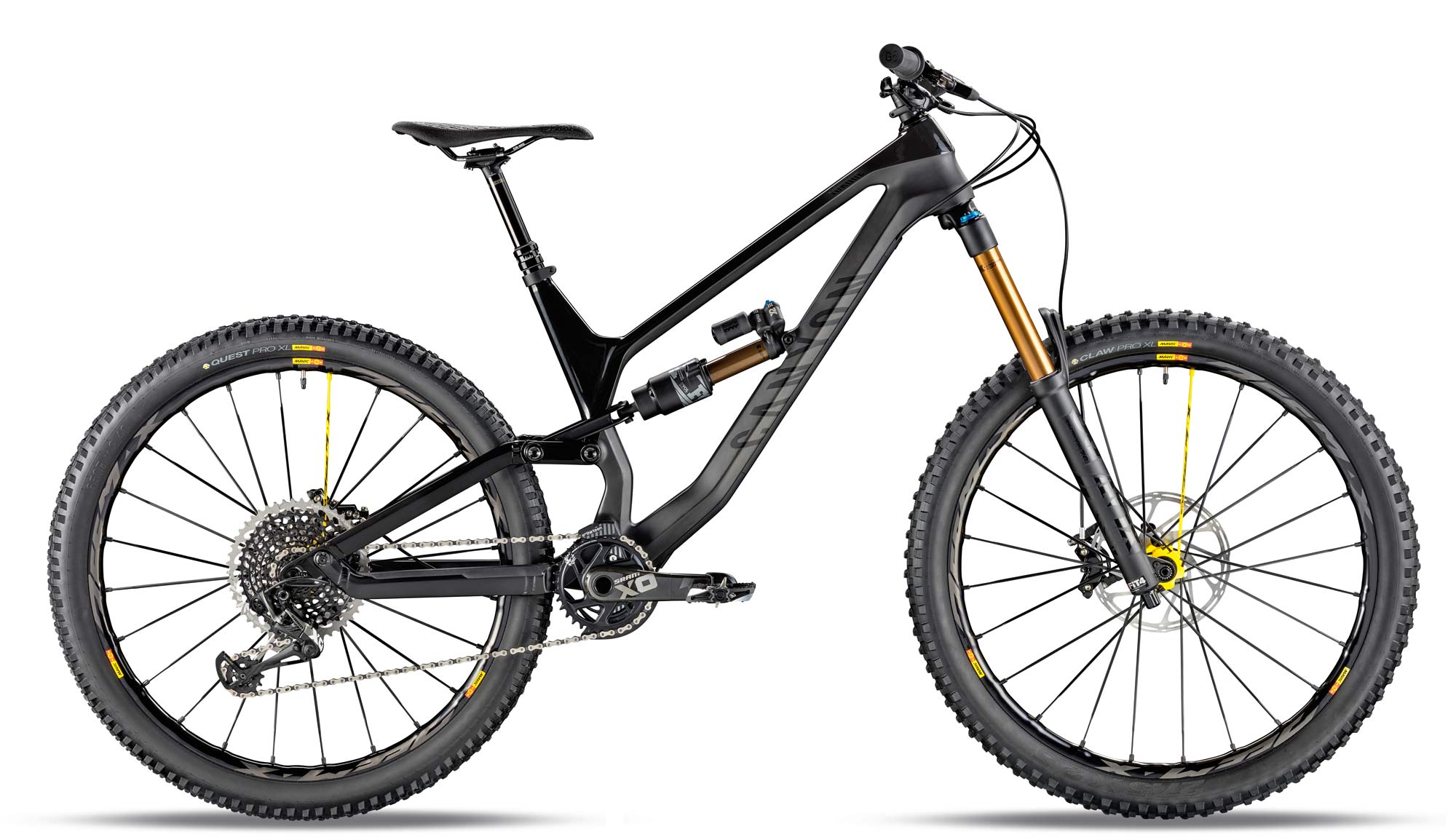 A 2500€ carbon + aluminum frameset is also available for those looking to build up their own Super Enduro or park bike. The aluminum option goes full alloy, mating the same 6066 rear end from the Torque CF to a matching 6066 aluminum main triangle. Canyon says that of course it adds a bit of weight, but this alloy is just hard to beat for strength & durability. Both Torque AL 6.0 versions sell for the same 2600€ with a Lyric RC fork, Super Deluxe RCT shock, and GX 1×11 drivetrains. The WMN version is available only in the XS, S &M sizing, and gets women focused grips & saddle on the otherwise identical build. Canyon is hesitant to pigeon-hole the new bike into a single category – maybe super enduro, freeride, or park bike – saying it is more of a do-it-all gravity sled. But ultimately with long travel and DH rated capabilities, it can handle anything you thing you can huck it off, and is happy to send huge gaps. All of the bikes are up now in Canyon’s webshop, with varying availability by material & build.