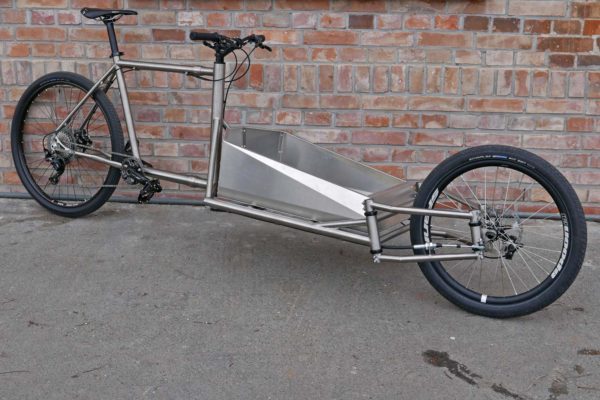 The Catan titanium Cargobike takes an entirely different approach to hauling, with a unique front steering linkage that leaves the bike with five headsets, plus titanium construction that smooths out rough rides. Sebastian Grassow of Catan Bikes wanted a cargo bike that could be used just as well to take the kids to school, as to head out on an adventure together. And since he couldn’t find the bike he wanted, he developed something entirely unique… 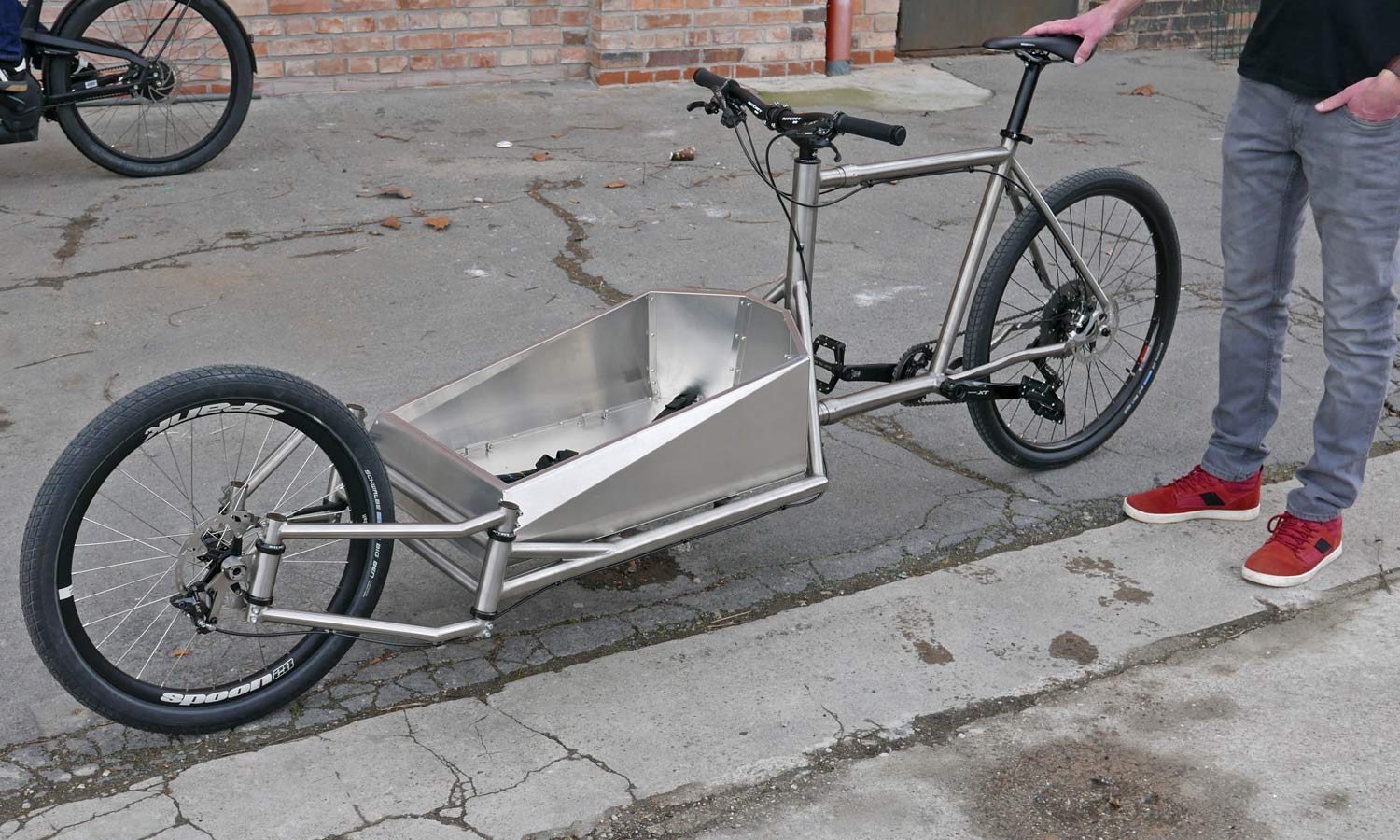 While there are plenty of ‘bakfiets’-style front box cargo bikes on the market that can haul your kids or heavy load around town, very few are much fun to ride off the smoothest of tarmac due to their small front wheels, long wheelbase, and stiff alloy frames to manage maximum carrying capacities. 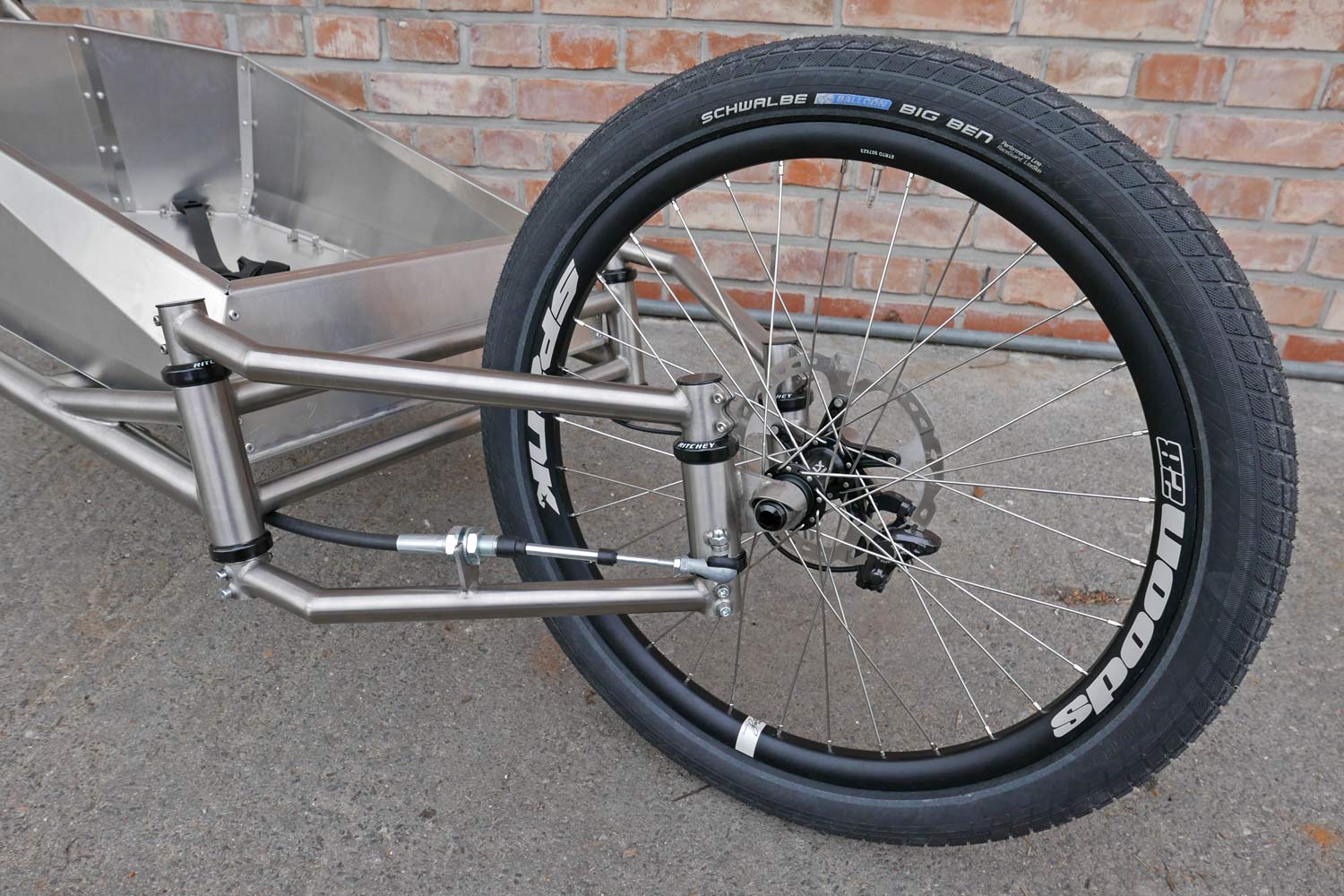 Much like we saw last week with the Elian Ultimate cargo bike, Catan saw the same loss of direct steering input and resulting fork chatter with conventional box bike designs. So he too opted for a hub-based steering mechanism. But while Elian’s patented design pivots at the hub only, Catan takes a totally different approach…

With a pair of linkage arms pivoting off either side of the front of the Catan Cargobike box (around multiple sets of Ritchey headsets), when you turn the handlebar the front wheel pivots, while also shifting slightly to the outside of the turn. For example (as seen above left) turning the bar to the right, the right-side linkage arm rotates leftward, pushing the hub left of the bike’s centerline, and resulting in the front wheel pivoting to the left. The rationale as Grassow explained it, is that doing so shifts the weight of the load to the inside of the turn, making cornering with a heavy cargo load easier.

The design also of course allows for the use of a larger front wheel. This Catan Cargobike features a 24″ front wheel, which was chosen to allow it to ride more smoothly over irregular terrain. (Yes, again you can call this a gravel cargo bike!) The linkage design can in fact be adapted to an even larger front wheel quite easily by extending the leading arms or shifting their kink. But Catan settled on this 24″ setup as a larger wheel or decreased turning radius (with more front wheel pivot) result in less optimal normal steering. 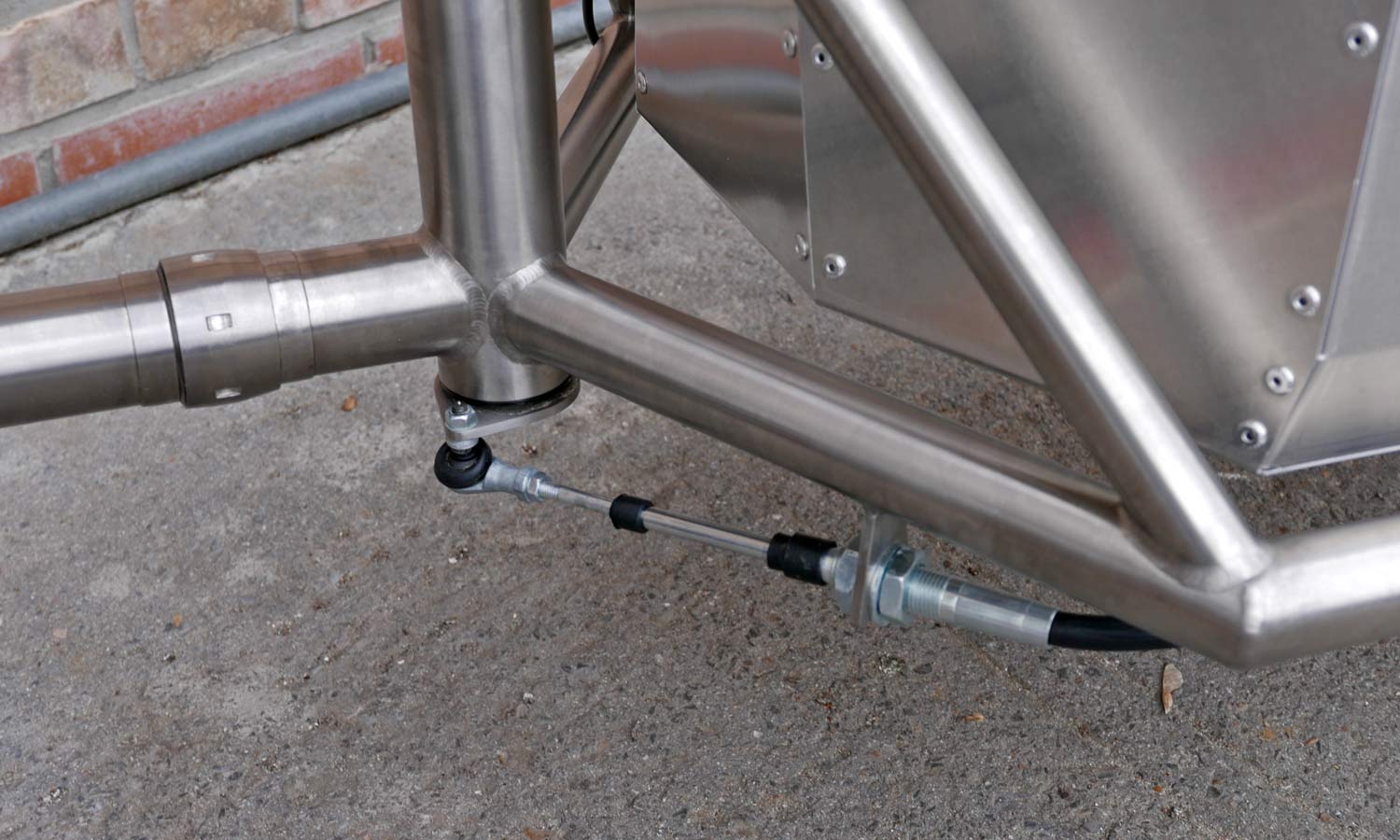 Steering is actuated by a push-pull rod, sliding within a flexible housing. This allows for limitation of the angle the front wheel moves to either side, and the inherent friction within the housing serves as a steering damper while riding over irregular terrain.

The other standout feature of the Catan Cargobike is the flex of its titanium construction. The bike is engineered to carry an 80kg load in addition to the rider, but it is also designed to take advantage of the natural flexibility of ti to flex along its length to absorb impact at either wheel without the need for suspension. Pushing down on the bars with your full weight (say my 80kg), resulted in several centimeters of vertical flex. It felt odd at first, but the bike is quite stiff laterally, so it doesn’t seem too strange while riding. 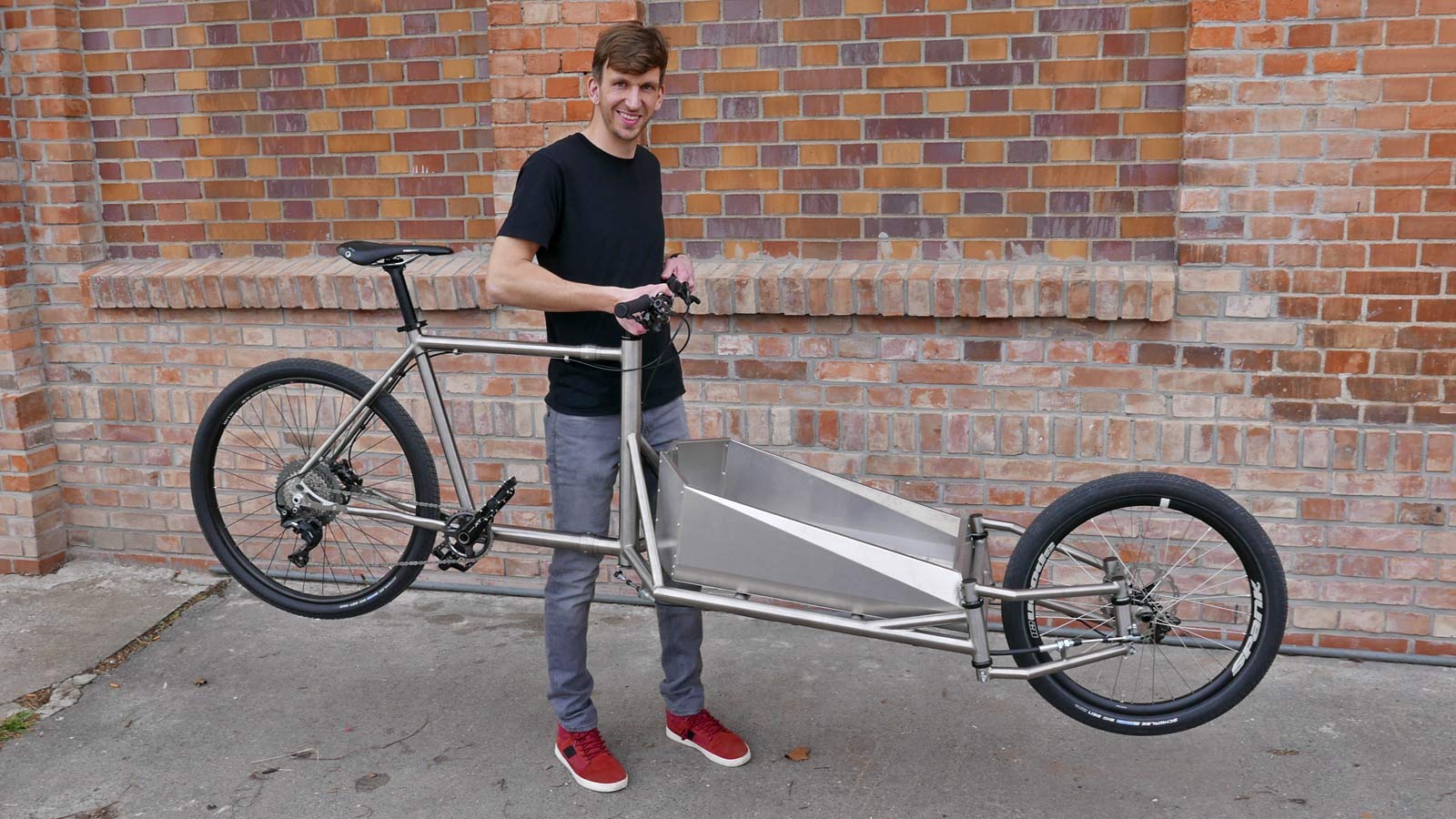 But that is probably partly due simply to the unique handling characteristics from the front wheel steering design, the bike’s 2.65m overall length, and its remarkable light weight for a cargo bike. I rode the bike around for a bit (unloaded) and the way the front wheel shifts to the side when steering took riding for a few minutes to get under control. After a little while of riding in wavy straight lines while repeatedly throwing a foot out, I did quickly get comfortable enough to manage basic maneuvering. But for sure if you want one of these, it will take a bit of relearning how to ride before you will be comfortable heading off-road like Grassow does with the cargo bike. 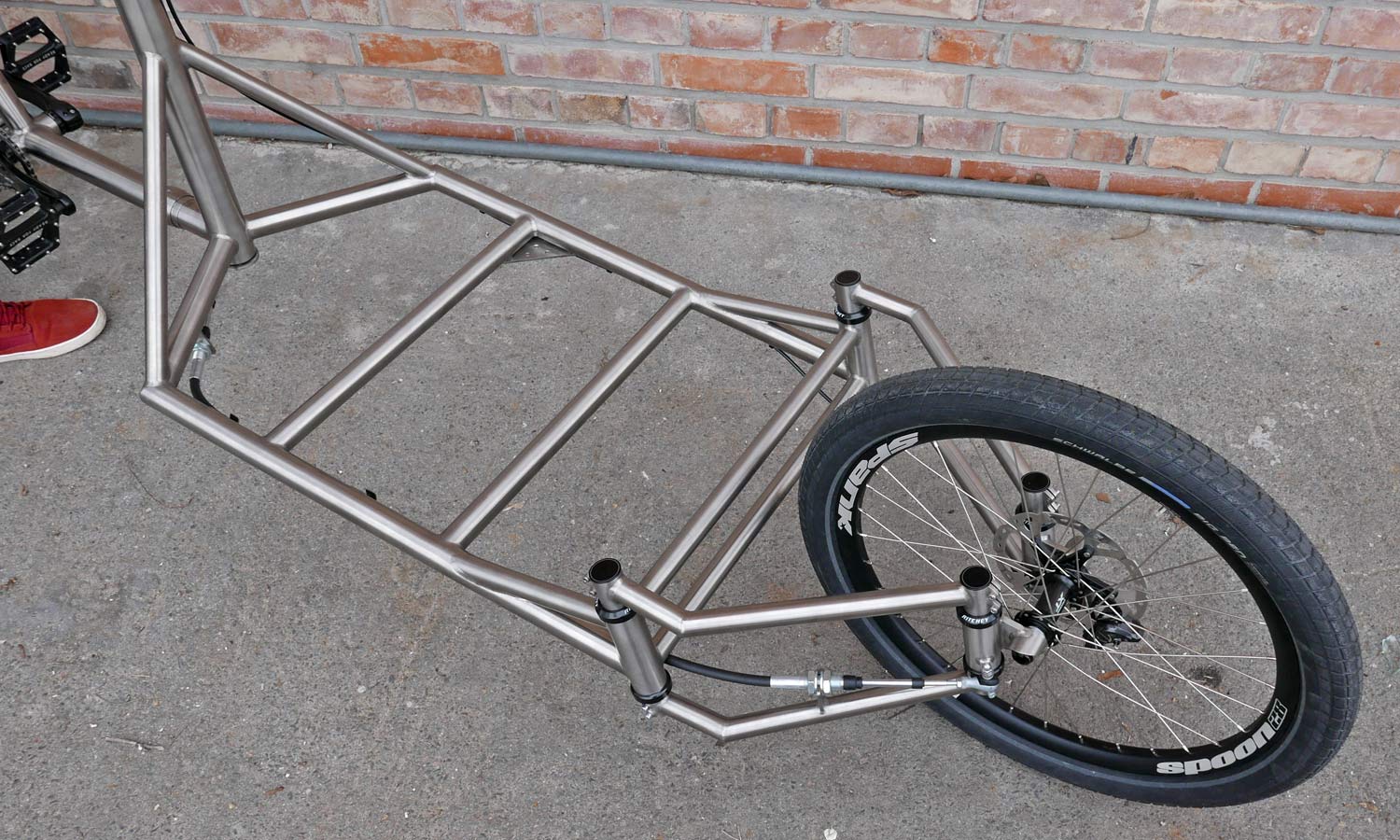 This Catan Cargobike is Grassow’s first prototype in titanium (after having built steel versions himself) and was made for him in China. That’s where he plans now to produce bikes for customers who would like to buy one as well. As it sits this complete Catan titanium Cargobike weighs 17.8kg (with a frame weight claimed at ~8kg.) 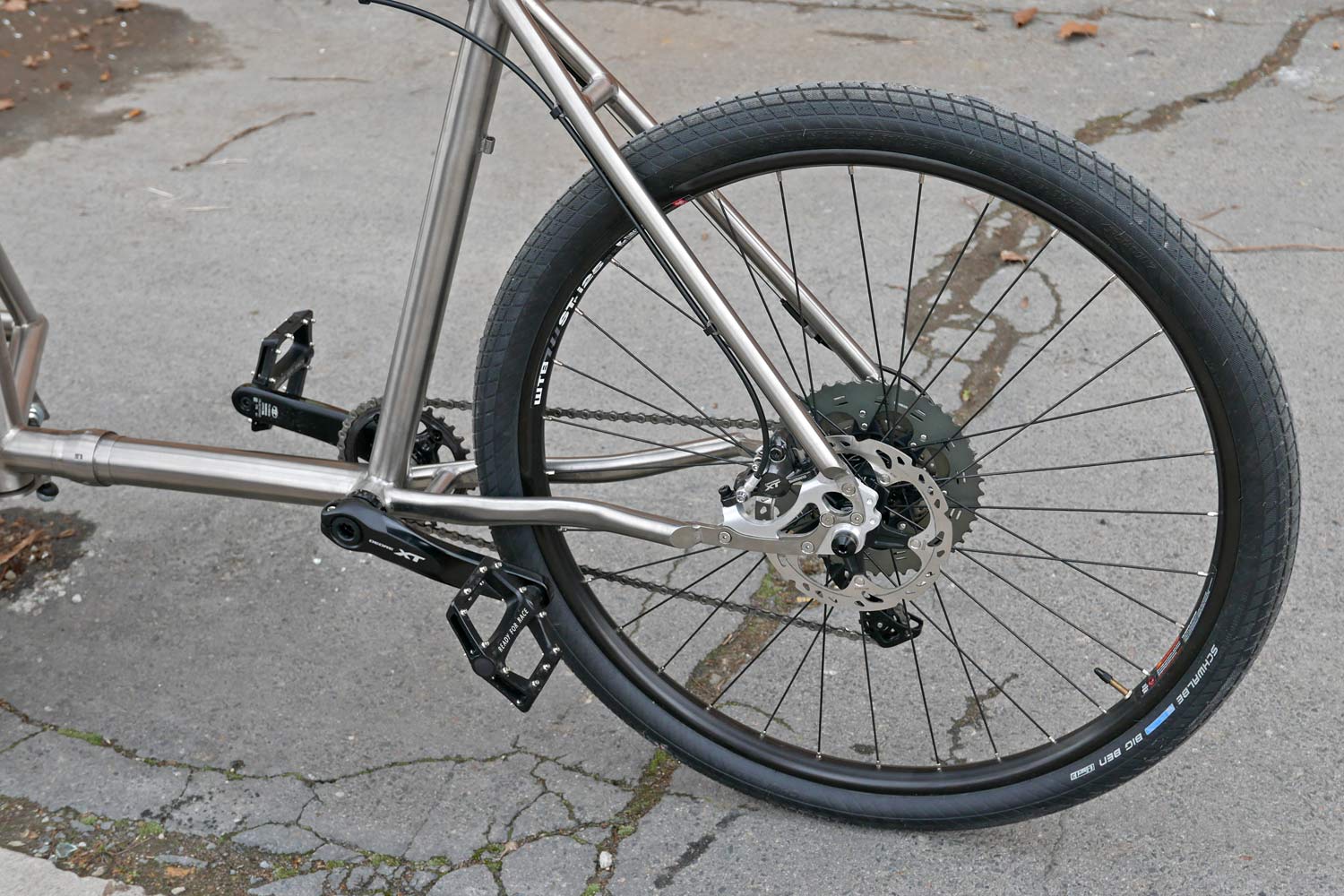 It features a pair of S&S couplers to break it down to take up less space, a folding centerstand, and removable ti cargo platform. With a Shimano XT 1×11 drivetrain, 27.5″ rear wheel & 180mm hydraulic disc brakes, it would retail for 8800€. 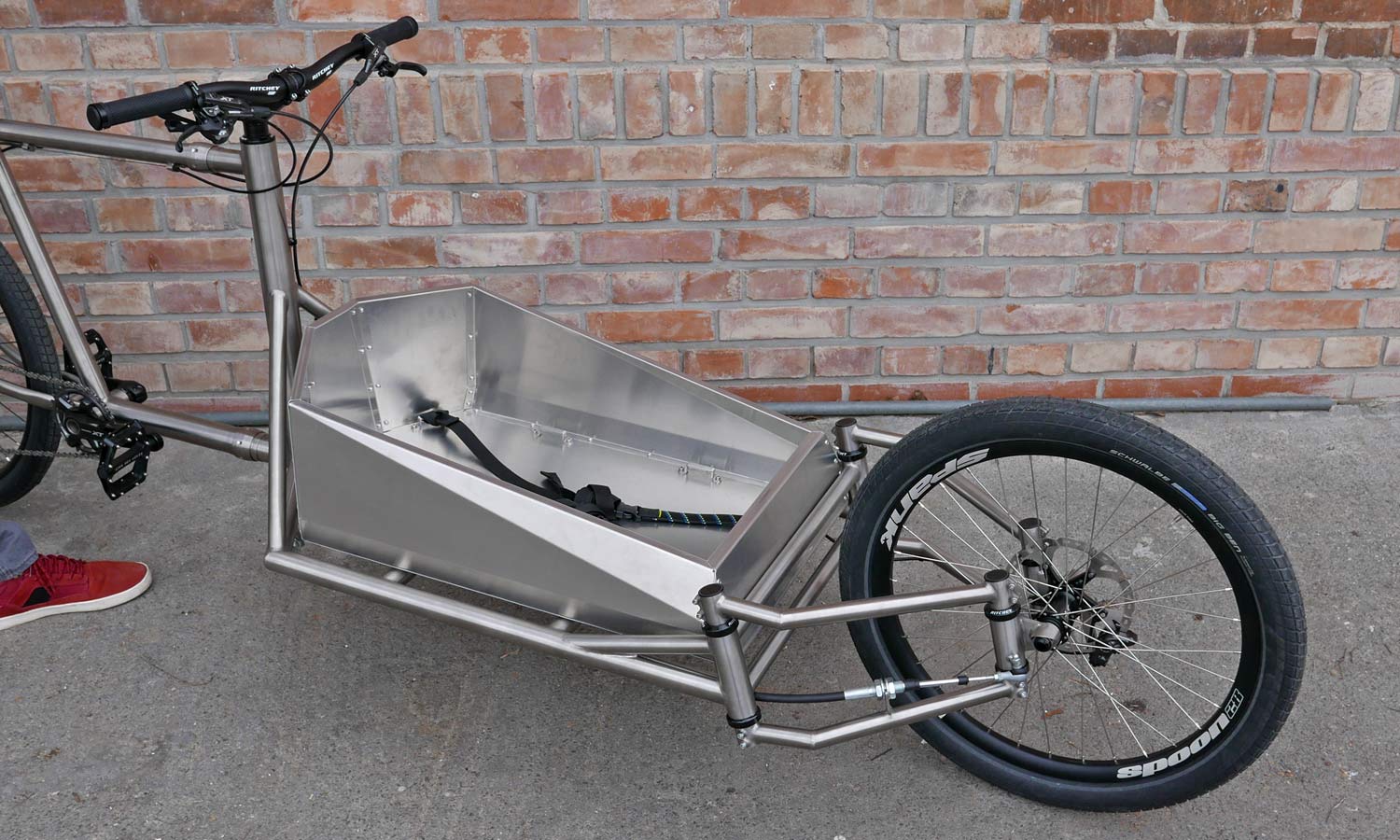 But each Catan Cargobike will be produced to order, so buyers could opt for other builds, from belt-drive single speeds to Dura-Ace Di2. The concept for the bike was to create “a cargo bike that can be fully used to travel anywhere you like” With comfortable handling whether empty or loaded, just pack up your kids or gear and head out on any type of roads you find for your next adventure, whether for the weekend or the start of world travels…

titanium cargo bike? I can’t even….

How on earth do you take a bike that long off-road? Frame flex an odd steering response would be the least of your worries, first you would have to deal with getting it around switchbacks, grounding the frame on bumps or when the front wheel rolls into a dip.

Hi Dylan, it was not designed to go on single trails and in the mountains. Here in Germany there are many bike routes that are in bad shape or are more like normal hiking trails. Maybe gravel describes it more correct. On these routes it is a lot of fun.

The bike is so nice, and the attention to details is high. Good job !

May I ask, is the push-rod a continuous rod or is there a cable in the housing ?

I think its unique and I like for that (would maybe consider buying for that…if I could justify $$). But I’ll also honestly say that the front end solves a stiffness problem in a way that introduces handling strangeness, which isn’t a good thing, regardless of how unique (again, although I view it as technically bad, it unique and probably functions well enough)

don’t know one wouldn’t just slap on a Bob trailer for 1/16th of the cost.

Carrying kids may be the only reason, but the basket seems pretty narrow. Maybe 1 kid?
Oh yeah, for us Americans, its got Euro snob appeal while Bob trailers are one pedal away from beer bellied, bearded recumbent tourer that will converse with you way too long about arcane topics.

I don’t drink beer and I don’t have a beard!
Although I will talk your ear off about the advantages of recumbents.
I’d like a Long-John bike, if there were a semi-recumbent version with a good backrest. But I’d like to stay a recumbent snob.

Just now I saw they are using actual Pics of the Catan Bike from Bikerumor. this is not okay. I did not agree to use photos of the complete bike for their advertising, nor sell the actual customized frame.

It is no secret that the frame is made in China (also stated in the article). The Catan frame however is not exactly the one from the link. But of course everybody is free to find a company that makes a mountainbike, roadbike or cargobike frame for him wherever he wants and build the bike he love (this is what I did :-)).