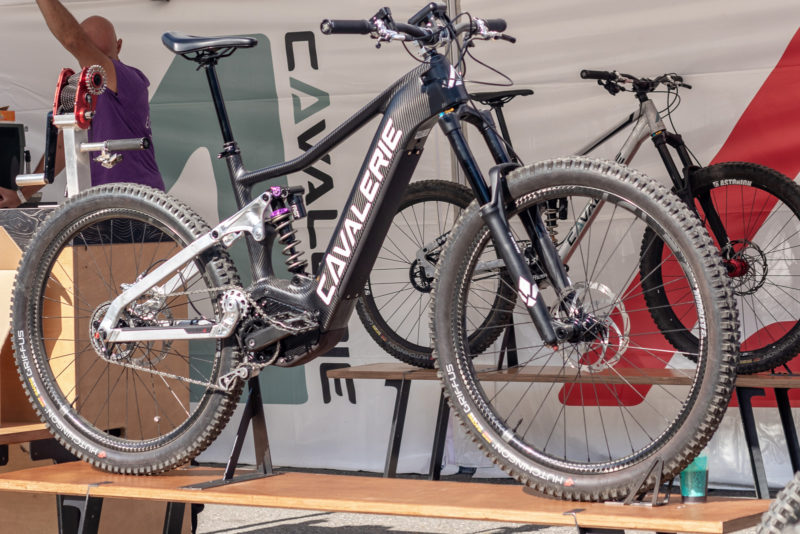 French mountain bike manufacturer, Cavalerie, has released details on its very first eMTB, set to launch by the end of 2022. The prototype was most recently shown at the Verbier Bike Festival where it was proudly set out on display accompanied by the brand’s newly released Anakin V2 enduro bike.

No Cavalerie is complete without the presence of a gearbox, and the eMTB prototype is no different. This one sports a Cyclee motor, which is essentially an Effigear Gearbox combined with a Valeo eBike motor. At the heart of this bike, the Cyclee has allowed Cavalerie to stick to its design principles of centered mass, low unsprung mass, and low maintenance. In the absence of a complete geometry chart, we don’t yet know everything there is to know about this high-pivot four-bar linkage gearbox eMTB, but here’s what we can tell you so far.

All photos by Batiste Nosjean

Cavalerie are set to add another Gearbox-driven eMTB to the market before the year is out, adding themselves to a growing number of manufacturers who appreciate the benefits of combining an eBike motor with a gearbox drivetrain. 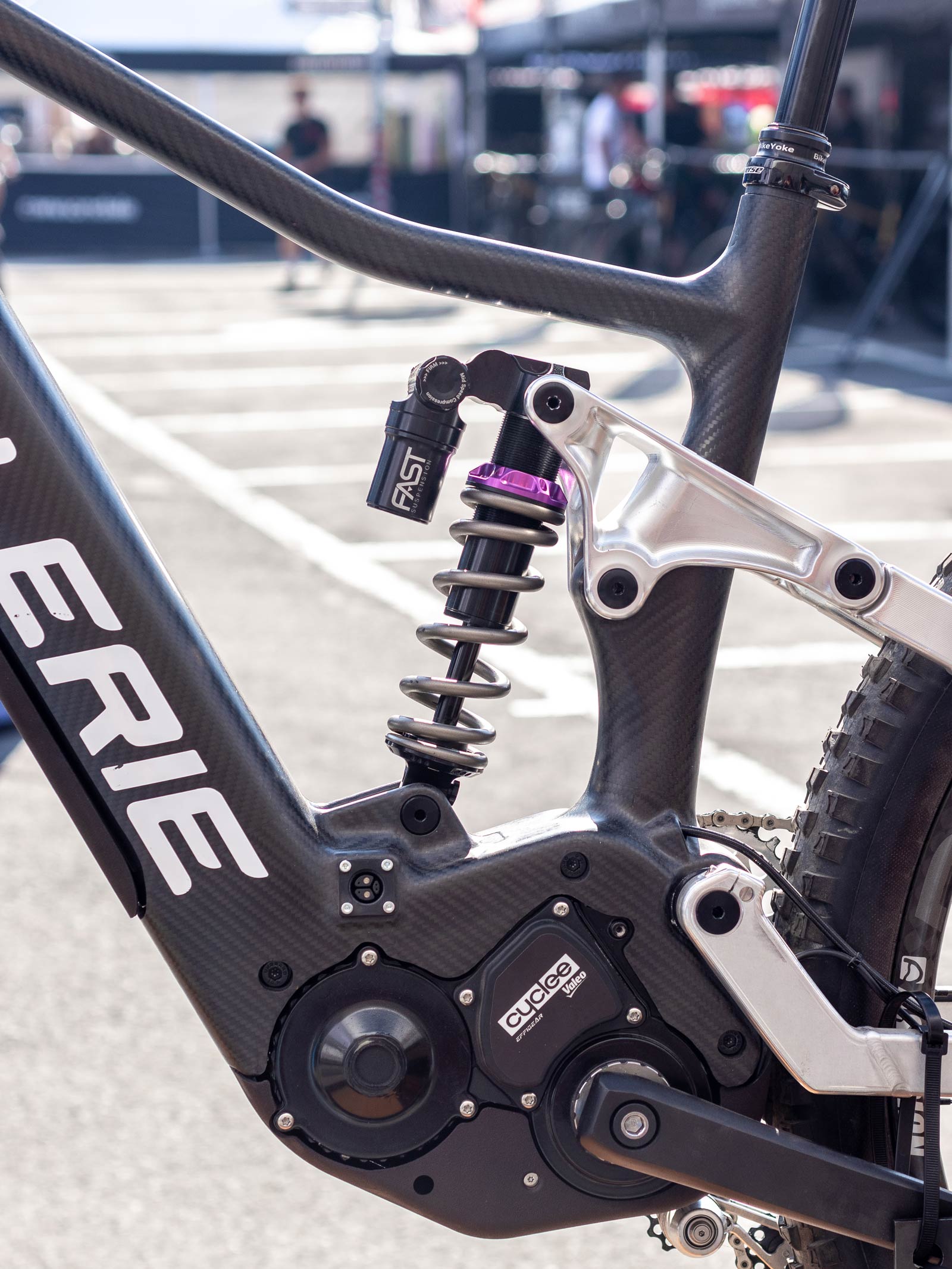 The French bike manufacturer is almost synonymous with gearboxes, with founder Guy Cavalerie having spent 7 years developing the 3-axis Effigear gearbox, something seen on all Cavalerie Bikes since the brand’s inception in 2011. Their Falcon DH Bike and Squirrel Freeride Bike were the first to bear the gearbox, with the shorter-travel Anakin and the Anatrail bikes following in their wake.

It was to be expected that, if Cavalerie were to ever delve into the world of eBikes, it too would boast a gearbox drivetrain. The Cyclee motor produced by French eBike motor manufacturer, Valeo, was the obvious solution for Cavalerie, especially as it runs on Effigear internals with them having previously licensed their shifting technology to Valeo. 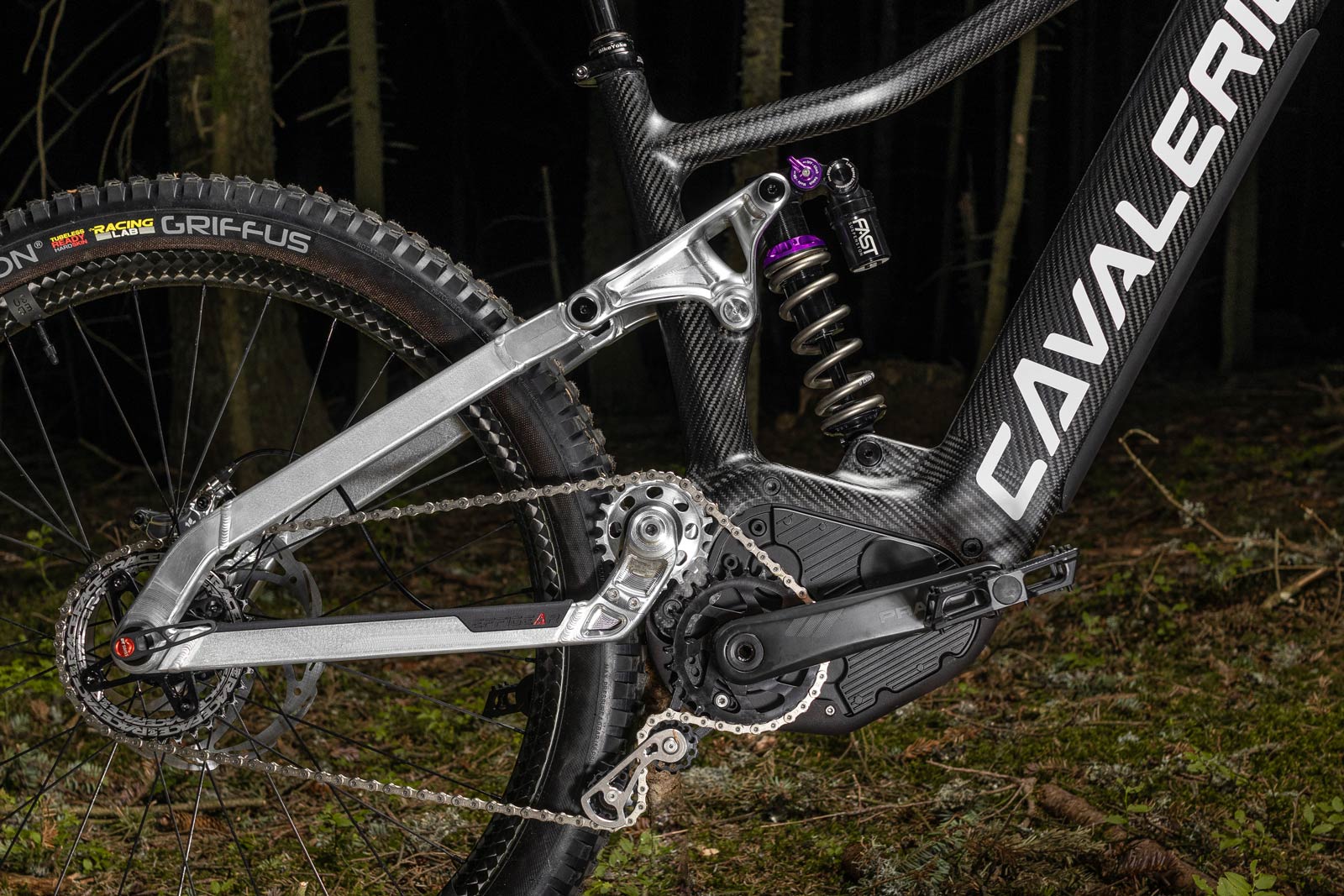 It is one of a handful of Gearbox eBike Motors on the market today, and probably the most powerful of the lot, with a 120 Nm maximum torque and a maximum continuous power output of 750 W. The 7-speed gearbox boasts a 450% range and features automatic sequential shifting. With benefits including massively reduced unsprung mass, very low maintenance requirements (one oil change per year) and reduced vulnerability to wayward trail side debris, we fully expect to see more Gearbox eBike motors enter the market over the coming years.

I digress. The Cyclee motor is combined with a 630 Wh battery tucked inside the downtube. The motor itself weighs around 5 kg with the claimed weight for the complete eBike in a size large coming in at 24.5 kg with pedals. Fairly impressive, we think. 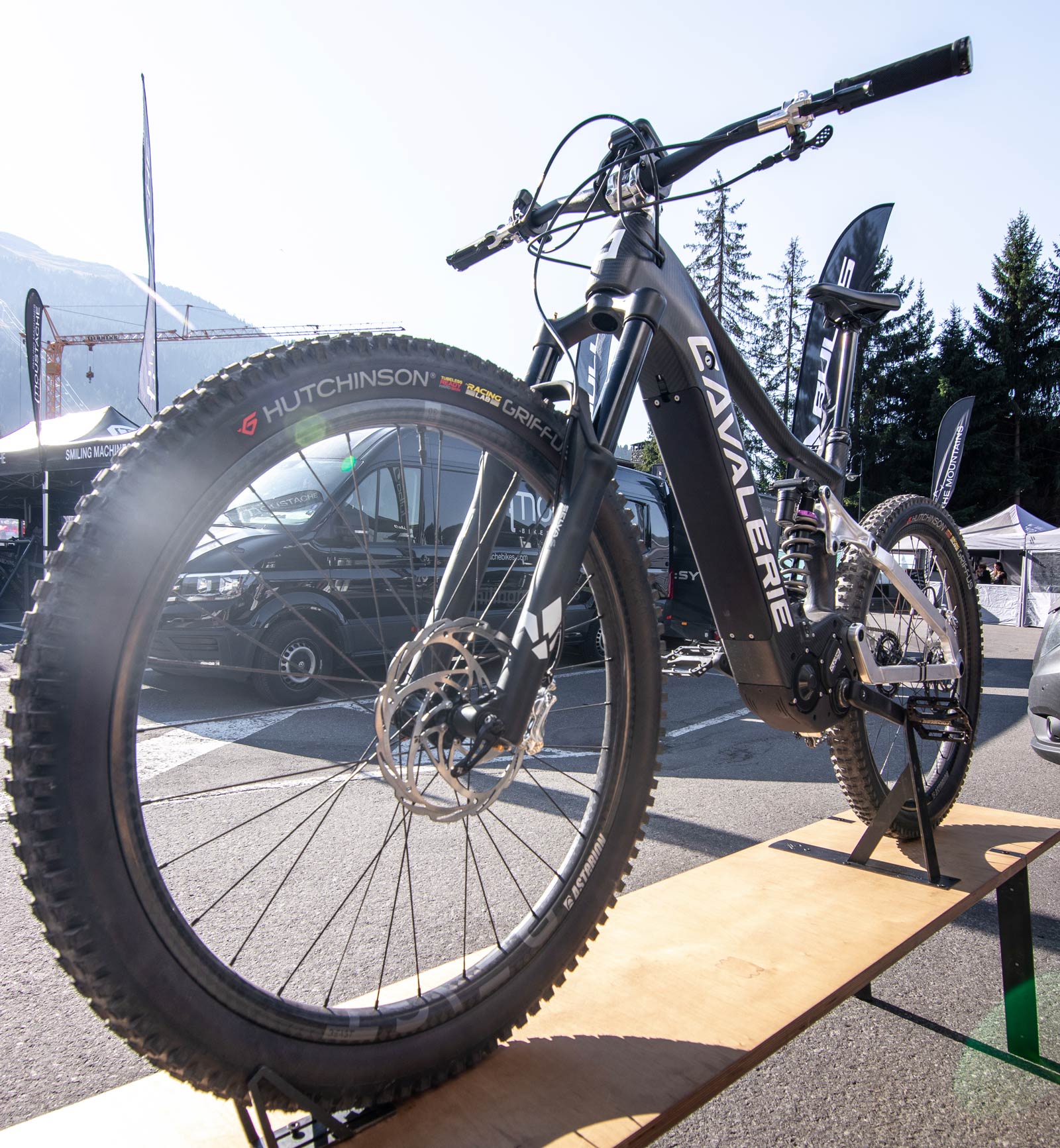 The Cavalerie eMTB’s geometry indicates its gravity-oriented intentions. While the recently released Anakin V2 enduro bike is a bit of a transformer, in that its geometry, wheel size and travel numbers can be switched up through fifteen possible combinations, each of these parameters are fixed on the eBike. This one is designed for a mixed-wheel set up only. A complete geometry chart is still to come, but we can tell you that the large frame pictured throughout has a 64° head angle, a 480mm reach, 435mm chainstays and a 77.5° seat tube angle.

While Cavalerie build the Anakin V2 from aluminum, the eMTB prototype has a carbon front triangle, paired with an aluminum rocker and rear stays. The reason for that, they say, is two-fold; it is easier to work with carbon to accomodate the battery and, it is actually cheaper than hydro-forming 7020 series aluminium in Europe, as they do for the Anakin V2. 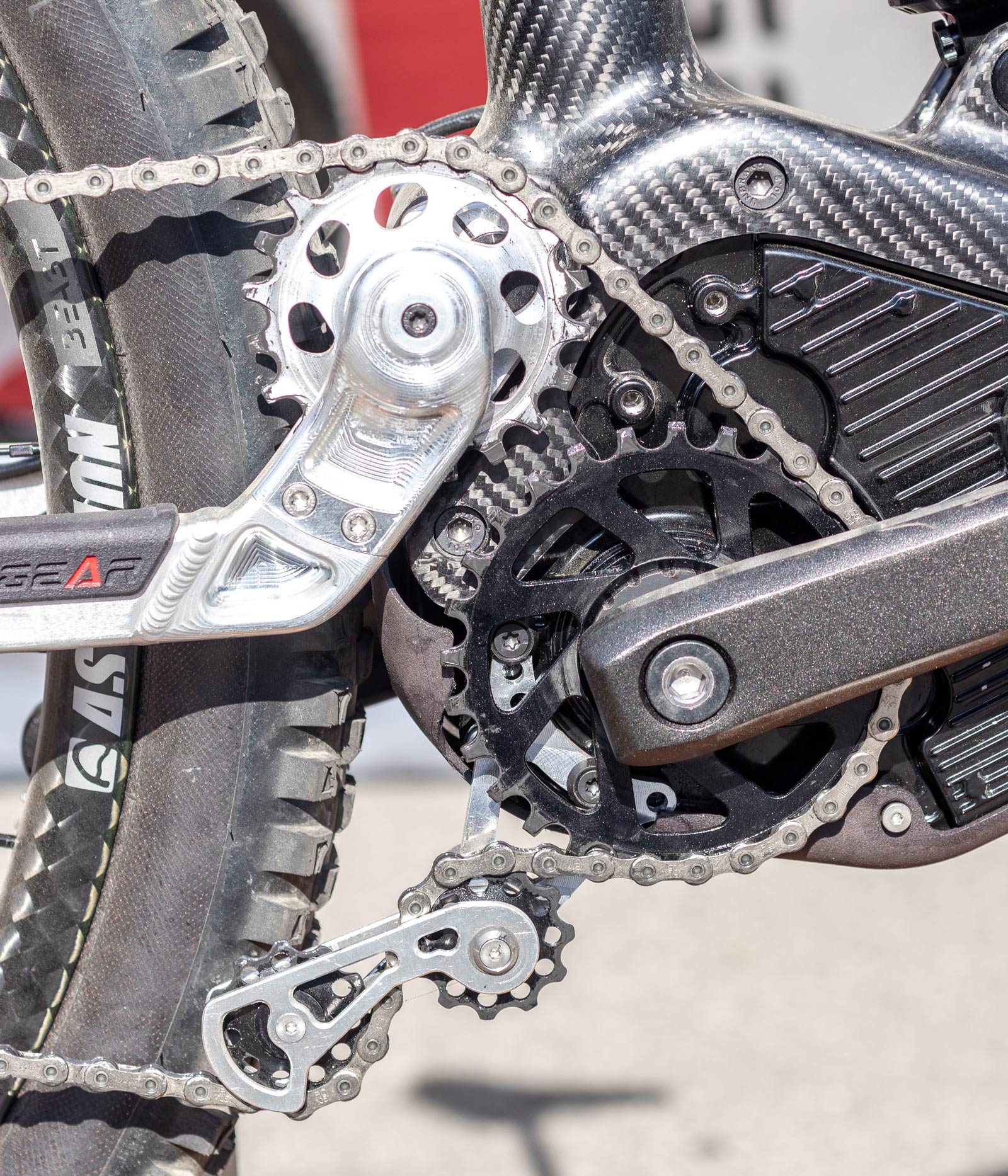 The eBike’s 160mm rear wheel travel is driven by a four-bar linkage, wherein the main pivot is positioned above, and rearward of, the chainring, and there is a pivot concentric to the rear axle. An idler pulley is added to the drivetrain to route the chain up and over that higher than usual main pivot location, to reign in the undesirable anti-squat characteristics the system would otherwise exhibit – namely, pedal kickback. A chain tensioner is added behind the chainring on the lower chainline to feed extra chain length (and retract it) as the bike’s rear-center length grows and shrinks as the rear wheel cycles through its suspension travel. 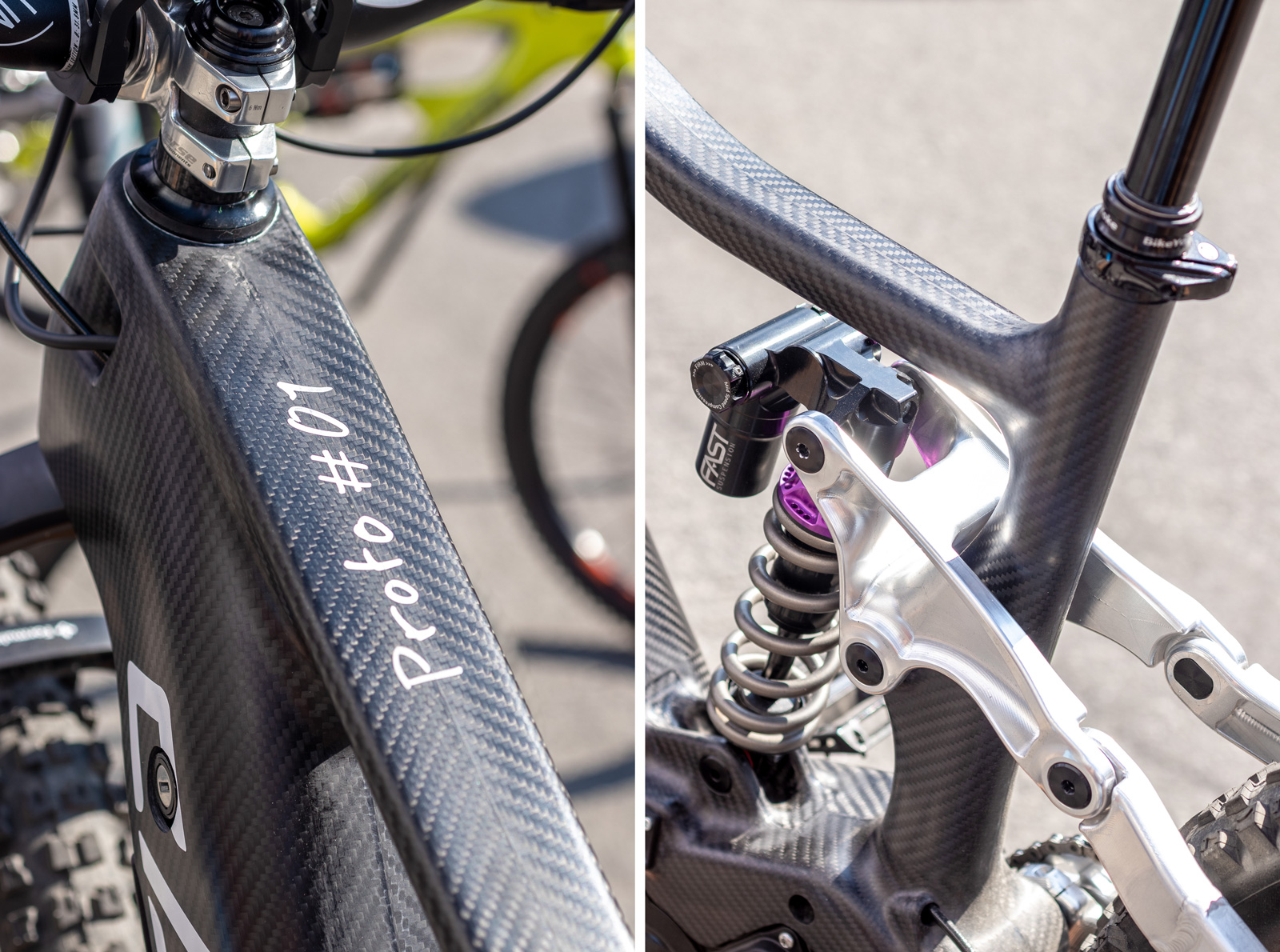 The frame can accomodate air and coil shocks, but the framesets and complete bikes will be sold with coil shocks only. Like the bike’s geometry, the linkage progression is non-adjustable, too.

First complete bike will start at 8900€