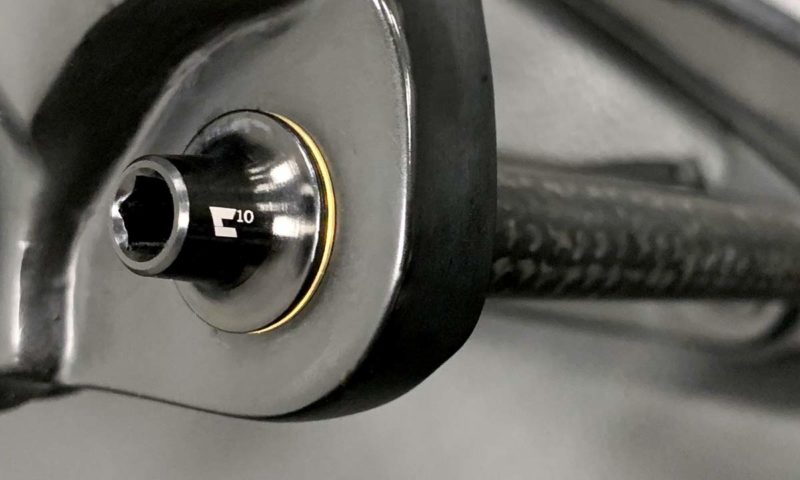 With ten years of crafting World Cup-proven lightweight carbon & alloy XC components in Switzerland, Ceetec has given their prototype lab the new name c10. The next product set to make it out of the lab and off to the races is the C10 Carbon Axle, shedding grams off pro cross-country racers’ bike in their last push towards the Tokyo 2020 Olympics.

The new C10 lab actually comes out of C One Zero. C1 is their normal line. C.1.0 is the no-holds-barred division, where cost isn’t a concern, only the next & greatest component solution. This is the tuning division of a company that pretty much was already about tuning to start with.

Now, the upcoming C10 Carbon Axle is an odd little component. With a carbon shaft, machined aluminum end (and more!), all made in-house in Switzerland, it isn’t going to come cheap. And how much weight are you really going to save in a single thru-axle.

But here’s the thing, Ceetec components are meticulously developed & produced for a seriously small audience. This is a brand that without really sponsoring riders, you still find their components all over the race bikes of professional XC mountain bikes on the World Cup circuit. And with an Olympic year this season, there’s plenty of demand to shave a few grams off an axle, chainguide, seatpost or clamp, handlebar, or even a saddle when you don’t have to sacrifice performance or durability.

That’s where the C10 Carbon Axle comes in. This is more than meets the eye. Ceetec actually has pros racing & developing carbon axles since the 2016 World Cup, down to just 20g. But they couldn’t really deliver the long-term durability they demand for a race-proven, race-ready product… until now.

The new C10 Carbon Axle is much more complicated than it looks. Sure, the ends have precision CNC-machined, anodized alloy threads & the most pared-down end cap I’ve seen on any thru-axle. But connecting them is first a lightweight titanium inner structure to resist the real torsional forces Ceetec uncovered in their early prototypes. Then, it is covered with a variable thickness (multi-butted?) 3K weave carbon shaft, thicker at hub bearing locations, to handle tension & load transfer. 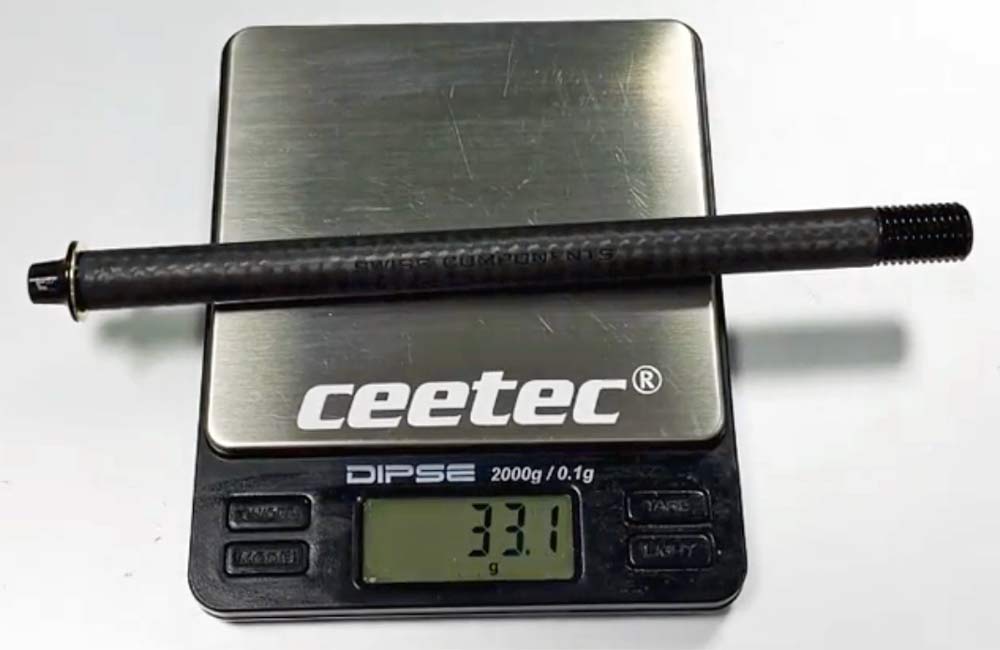 Ceetec builds components light & simple. At 33.1g for this 178mm long M12x1.5, you are going to cut your weight at least in half if you have an alloy QR thru-axle (still only saving maybe 30-40g). But there are other premium entirely alloy thru-axles that fall in the same weight range as this. Real claimed weights for most standard sizes will be 30-35g. 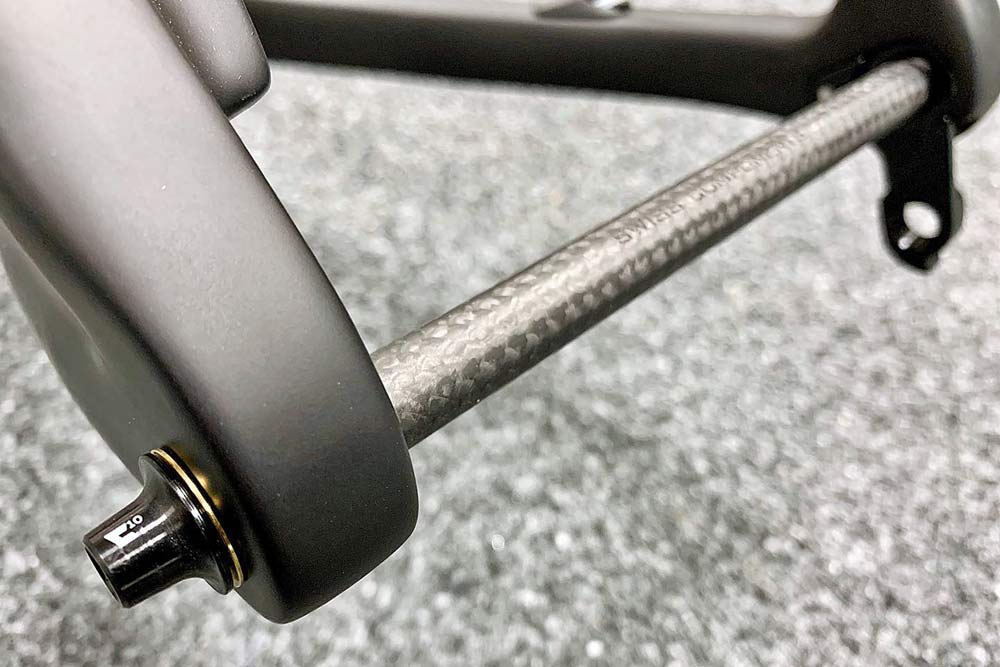 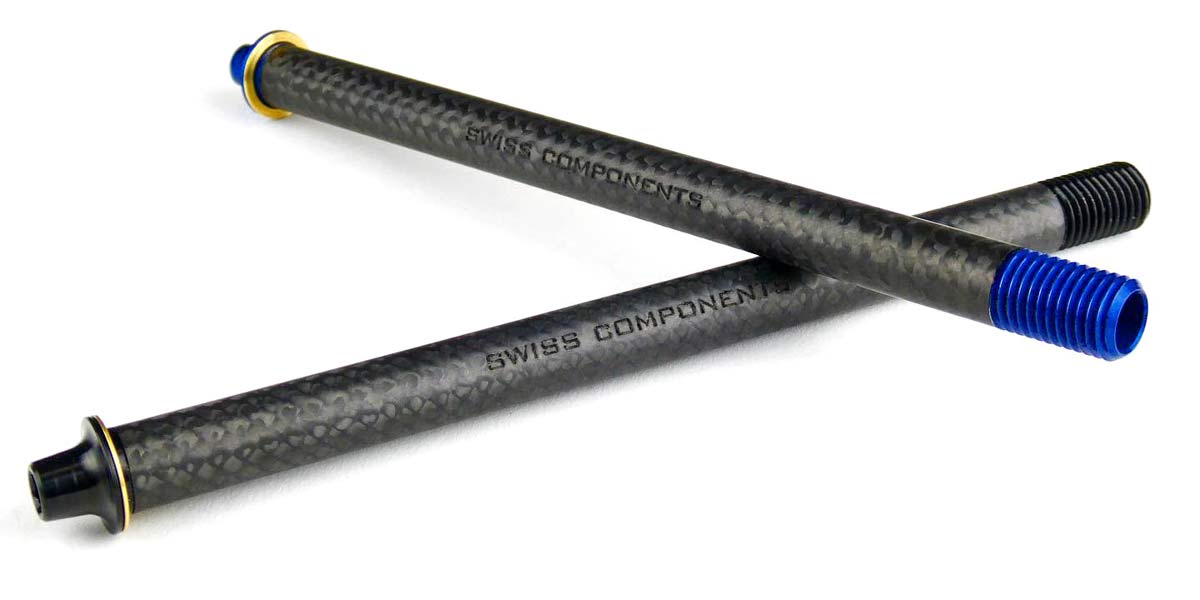 So far, we’ve been told that 12mm Shimano 1.5 & Maxle 1.75 thread pitch versions will launch first, with Syntace X12 coming soon too. Stock lengths are available for 142mm & Boost 148mm hubs. But Ceetec can make them to order now in 1mm length increments from 150-182mm. And in the near future, they’ll stretch that up to max 200m.

Standard anodized colors will be black or red, but we’ve already seen blue too, and they say all of their ano colors will officially be available on request. Ceetec assures us that the carbon axles will be available from their online shop by the end of next week. Retail price will be 108.5 Swiss francs (~$112 / 100€), expensive sure, but most likely more durable than anything even in their ballpark for the weight.

The new Carbon Axle isn’t the only new development expected to make if out of the C10 lab this season. They’ve also cryptically teased work on a lightweight dropper post it seems. Ceetec has hinted to us a few times that they have ambitions of extending beyond lightweight cockpits & chainguides, having co-developed frames in the past, with ambitions to take that to the next level with European production. And a number of their cockpit components could also be due for a refresh soon too?

if they sponsor the red bull rampage riders I’d be interested. until then no thanks seems a crazy place to use carbon.

Heavier than Carbon-Ti and Extralite, off the top of my head, while being considerably more expensive. As far as stiffer, I’d like to see some stiffness tests installed on bikes. If the flex from the thru axle isn’t several orders of magnitude less than flex measured at the rim, I’d be surprised.

nothing says Swiss Precision Engineering like cheap chinese calipers. this product is a joke.

Ceetec had to “uncover” torsional strain on a bolt? Yeah, I trust fully trust their engineering…

They don’t factor in the weight of an allen wrench to remove the wheel during a flat.