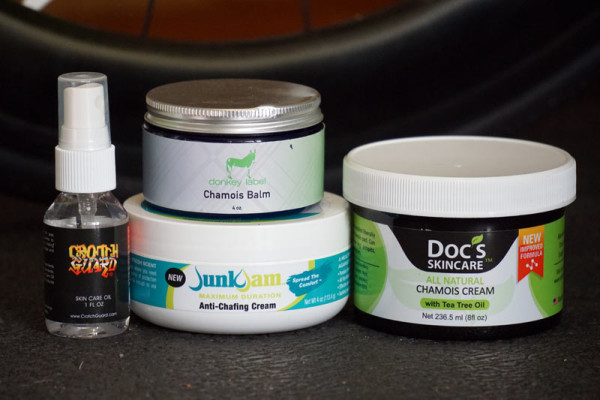 Of all the things we put on our bodies before getting on the bike, perhaps none should be more heavily scrutinized than the chamois cream that’s absorbed into our skin (and very special skin at that). So, as someone who has almost as extensive a collection of balms, butters, lotions and potions as I do bike shorts (which is to say, a giant box full), I’ve been testing four of the lesser known or newer formulas on the road, trail and trainer.

All four are free of parabens, petroleum products and other such chemicals. Each has it’s own unique consistency, from oil to almost pasty – something for everyone. Slide past the break for ingredients and pics of Crotch Guard, Junk Jam, Donkey Label and Doc’s Skincare…

Donkey Label’s chamois balm sits in the middle of the consistency spectrum, feeling more like an ointment. There’s no water in it, using organic oils and beeswax as the base and plenty of essential oils to protect and heal the skin. And make it smell good. There’s also the slightest bit of tingle, but it is minimal, and they offer a non-tingle version, too.

This one remains one of my favorites for two reasons: It stays on during long rides, and it smells really good. A bit medicinal, but I like that. I suspect its staying power has much to do with the oil-and-wax base, but even after several hours in the saddle, it’s still there and still doing its job of preventing chafing. While it’s not “greasy”, if you’re used to the cream type chamois creams, it might feel that way at first, but that might also mean you’ve used too much.

A 3.4oz stainless steel tub runs $35, and a plastic 4.0oz refill tub is $25. They also make embrocations in mild and medium.

Doc’s Skincare makes highly natural products, and their chamois cream claims to be 95% natural. It uses tea tree oil, which surprisingly doesn’t imbue any tingle, and witch hazel to combat infection. The base is aloe vera juice, coconut oil and an emulsifying wax, which creates the creamiest cream of this bunch.

This ones’ been on the market for a while, and tested the first formulation and found that it was too watery and sweated away on hot rides. They’ve since reformulated and it’s longer lasting now, good for two hour rides or longer. It’s the lightest among this group of traditional “creams”, and it rubs in almost like a lotion. In fact, it’s pinch hit for face and hand lotion for me, and even as lip balm when nothing else was available. There’s a very light “doctor’s office” smell that I kinda like.

If you like lighter weight formulas, Doc’s could be the one for you. It’s the best deal of the bunch at $20.95 for an 8oz tub, and you can get it cheaper if you set up auto-reorder. Because it’s so light, I used slightly more per application, but it still worked out to the lowest cost per use by a good bit. 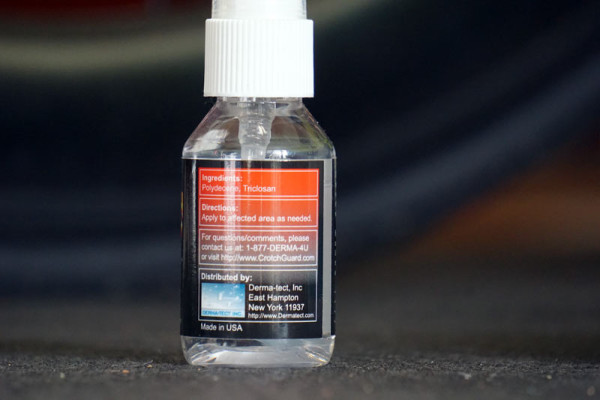 Crotch Guard is in a class by itself. First, it’s a spray. Second, there are just two ingredients: Polydecene and Triclosan. Polydecene is a hydrogenated version of Decene that’s used in cosmetics to smooth the skin. Basically, it surrounds the skin cells to protect them, and has been shown to reduce fine lines and wrinkles. It’s used here because that surrounding effect protects the skin from abrasion and keep bacteria and such from getting in. It sprays on light and feels slick, but not oily. And it soaks in, so you won’t really feel it after a few minutes.

As simple and light as it is, it worked on the few rides I tried it, and our other testers had generally good things to say. My only issue with it is the inclusion of Triclosan, which is a questionably effective antibacterial ingredient. It’s also one that may be causing more harm than good by creating super bacteria that are resistant to such things from over use (kids, tell your parents not to buy antibac soap). If you disagree and/or you really don’t like smearing a cream onto your nether region,  this stuff’s worth a shot. A 1oz travel bottle is $7.99 and the 4oz bottle is $21.99.

My new favorite is Junk Jam, and not just for giving DZ Nuts’ a run for its ridiculous name money. Junk Jam is the thickest of this group, almost reaching “paste” status. Once applied, it also feels the “softest”. It’s developed by Chris DeMarchi, a top-level U.S. Masters road and crit racer and triathlete, who wanted something that didn’t have synthetic chemicals and lasted longer. And it does last a long time. There’s no oiliness or greasiness, yet it has a slightly slick feeling going on. Once on, though, it’s all creaminess.

It uses a coconut oil, lanolin and beeswax base that’s infused with lemongrass oil, which gives it a faint Lemon Pledge scent. Call me odd, but I like that, too. I’m not sure there’s been a chamois cream aroma that’s offended me yet, though. I’m guessing it’s the lanolin that makes it thick and durable, and it works. I’ve also been using a dab of it as a hand/elbow/foot moisturizer in the winter. The 4oz tub retails for $24.99.

The best chamois cream is A&D diaper rash ointment. Less than a buck an ounce and really easy to find while out on a long tour.

Nothing comes between me and my chamois.

I haven’t used chamois cream since the days when shorts were wool and had real chamois. Noxema worked well for me back then. The advent of modern materials and anti-bacterial treatments has rendered their use as superfluous. It just gets absorbed into the foam anyway.

I never wore any chamois cream in the past, but as I get older, seems my skin is getting more sensitive in places it didn’t use to be. The fringes of my chamois seem to dig into my ‘bikini line’ area and upper thighs. Junk Jam has been the only cream to help here.