The latest two titanium bikes from Chiru take comfort off the beaten road & trail with all-day comfort & durability that any dropbar riser can appreciate. Now launching at the Taipei Cycle show, we first saw the new Kegeti still as a prototype before Pierre-Arnaud rode it to a podium placing at Kyrgyzstan’s inaugural Silk Road Mountain Race last summer. Plus, now there’s the even newer Kunlun an all-new, all-road bike that Chiru developed for modern endurance road riding. Chiru has turned the adventure touring experience of founder Pierre-Arnaud Le Magnan and a small group of his fellow off-road endurance athletes over the years into a brand building bike for us mere mortals. Most riders aren’t going to ride across a continent or 1000km in one fell swoop, but we all can benefit from endurance developed comfort & control. The new Kegeti adventure bike is a perfect example. Pierre-Arnaud originally planned to ride the wild SRMR across Kyrgyzstan on his standard 650b gravel Vagus, but when he tested it out on similar terrain closer to home he realized he needed to go bigger. That meant scaling up to 29″ wheels, essentially building a drop bar rigid monstercrosser interpretation of an extra burly gravel bike. 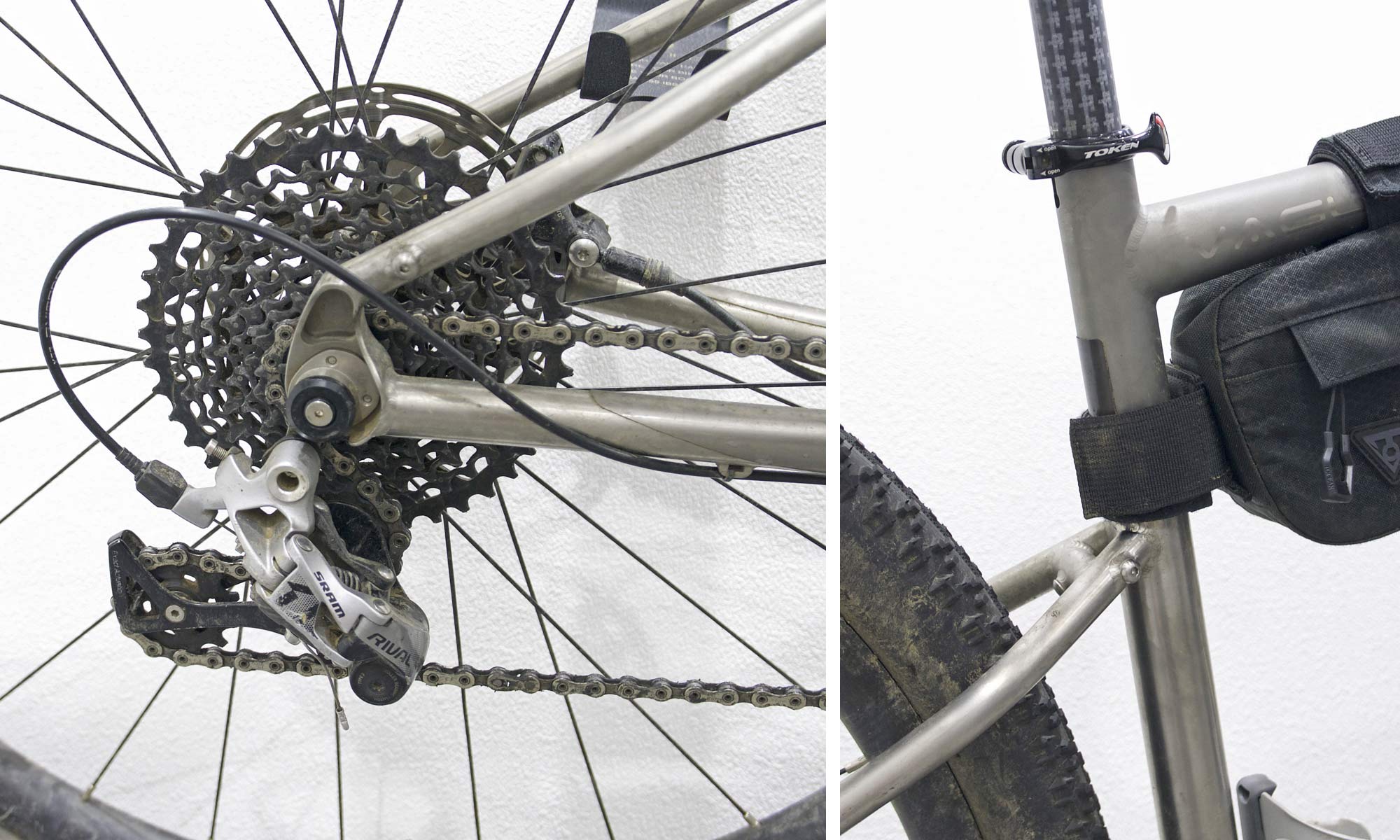 To make it all work with the larger wheels, 100mm suspension corrected carbon fork & bigger 29×2.2″ tires, geometry got tweaked to make the bike a bit more relaxed with a longer, more stable rear end (moving about halfway in the direction of the MTB Divider.) Instead of keeping the bike’s name as the Vagus+, Chiru rechristened the ultra-rough gravel bike as the Kegeti, in honor of the grueling 4000m Kegeti pass in the SRMR.

The now renamed 3/2.5 ti bike (this one still has the prototype name under that framebag) is officially available now for a frame+carbon fork price of 1980€, keeping all the same specs & bikepacking ready attachment points. Then there is the completely new Kunlun road bike that Chiru is classifying as ‘enduroad’. Essentially developed to be a modern endurance road bike for everything from gran fondos to light hard surface touring, Chiru sees this as the ideal bike for anyone who wants to ride fast, enjoy the ride, and not be afraid to venture off the pavement from time to time. The Kunlun shares much of the same tech as other Chiru bikes, from the 3Al/2.5V shaped titanium tubing to disc brakes and a 1.5″ tapered headtube. But the Kunlun does adopt more road-focused features like the internal (main triangle) routing, 12mm thru-axles, flat mount discs, and quick handling 71.5° headtube. Chiru wasn’t looking to develop the Kunlun as a gravel bike (their Vagus already has that covered), but looking to build a road bike around 32mm slicks (these here actually measured 34mm with a few extra mm of wiggle room to bump up to 34mm rubber on most rims). Just like the Kegeti was developed for the SRMR, this Kunlun was built to take on the 2019 running of the Transcontinental Race – 4400km of a mix fo road surfaces in an ultimate test of ultra-endurance racing across Europe. The biggest thing there is a need for comfort, so Chiru created extended seatstays to curve outward & bow to allow flex, while also bypassing the seattube. That allows the seatpost to flex for even more comfort for long days (and nights) in the saddle. The bike also gets a whole host of braze-ons for three bottles, rear fenders, plus a toptube bento box. The bike uses a stiff cold-formed downtube, threaded T47 bottom bracket, 27.2mm post, long & strong chainstays for comfort, and gets a lightweight set of rigid CNC machined titanium dropouts that take about a week to craft.

All in all the new bike isn’t much more expensive that the others at 2100€ for frame & fork, including a lifetime warranty on the ti construction. The Kunlun is available in five stock sizes (XS-XL) with a claimed frame weight of 1450g in M. Chiru continues their use of TeXtreme fiber reinforced carbon in components like carbon rims where it creates more impact resistance, and a unique look. Chiru, or rather CEC are also going to be offering a new ‘dark version’ of the TeXtreme top layer for those who want to be a little more subtle. Or there is the half and half option, like on the road bike above where half is just painted over black. MTB riser bars get the same TeXtreme treatments in XC  to DH widths, as do carbon seatposts, with the unique fibers making a much more vibration damped ride. Chiru/CEC are also getting into some forged titanium stems too. For the price of a premium carbon stem, now ti will be an option too, around 300€. Just don’t paint it black or someone will mistake it for carbon! A more traditional looking forged ti stem popped up on their original Vagus gravel bike, which should be available soon at an even lower price point.

I wanted to make a joke about when the phrase downroad was going to be coined but lost interest after the handlebars and stems and wheels!! Drool!

took the words right out of my mouth

The stem – while nice looks EXACTLY like a stem that was made of Cast Alu from the early ’90’s, almost as if it was from the same cast. It was called “Forge Ahead” from when “Aheadset” first came out. Same fixing bolt to the steer tube even.

That is the nicest Ti stem I’ve ever seen, the ‘normal’ one looks much cleaner than most Ti stems too.

The Kunlun is the best looking drop bar bike I’ve seen in a while. Great job on the rear triangle.

I had to chance to ride the Kunlun already in March. It is such a sweeeeeet ride with the Dyneema reinforced rims!