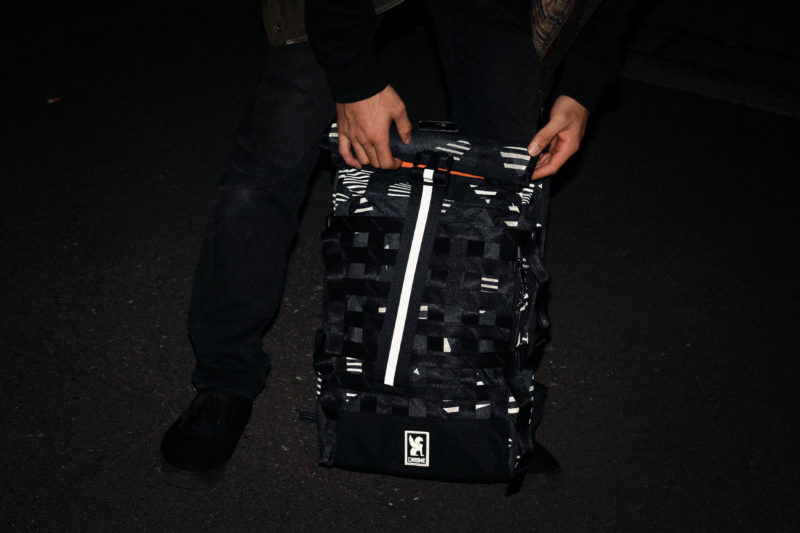 Chrome Industries has launched a new camouflage color pattern for some of its most popular bags that feature Swedish M90 geometric camouflage patterns with sharp reflective accents. 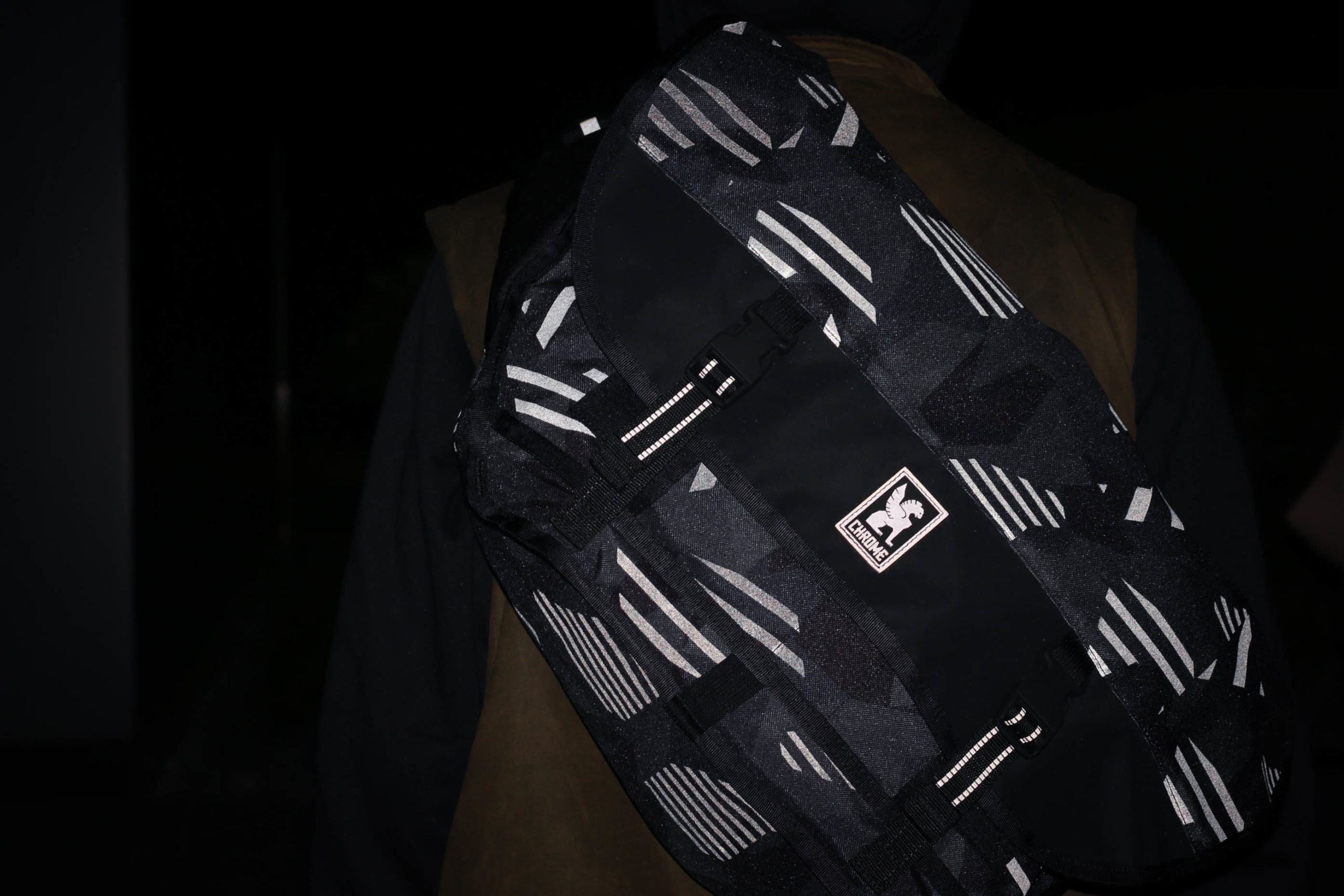 Chrome Industries has been rolling out Camo patterns for years, including a French Camo line released in 2013, and an earlier rendition of the reflective M90 Swedish Camo in 2015.

More stylistically in-line with what most people think of when they hear the word “Camo,” those bags featured browns, greens, whites, and grays meant to mimic different landscapes – and all had a distinctly military look. 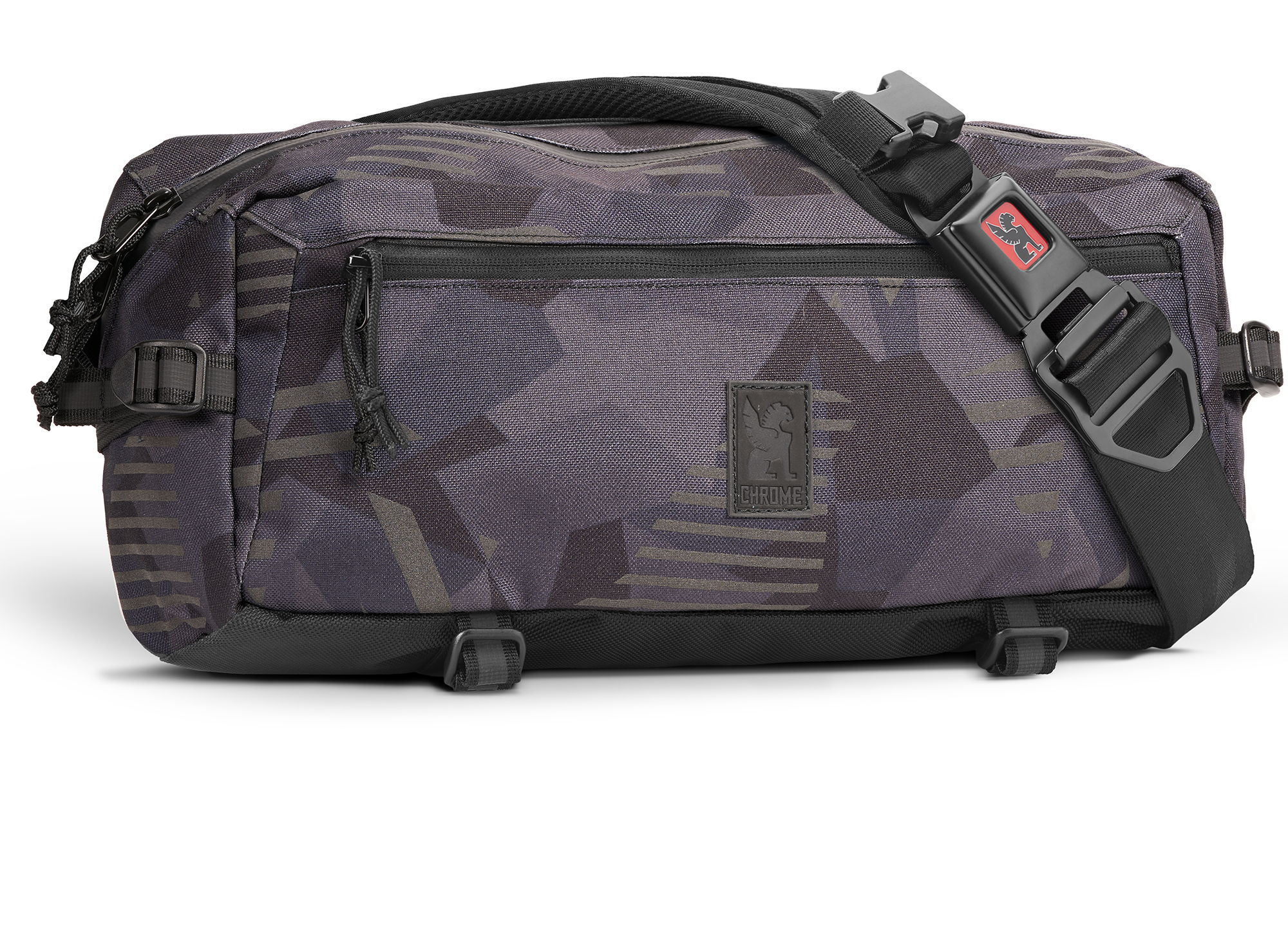 The newest line of Swedish Camo prints features straight-line reflective highlights that complement the sharp lines of the geometric patterns of the Swedish M90 Camo, which has become a popular pattern for cycling gear and apparel.

Search and State launched a M90 high-visibility Camo kit in the fall with the same idea to marry camouflage and visibility.

The blacks and grays of the bag appear more understated during the day, akin to a traditional camouflage print. But while under light, the bright reflective straight lines create a busy pattern that looks more like abstract art than camouflage. 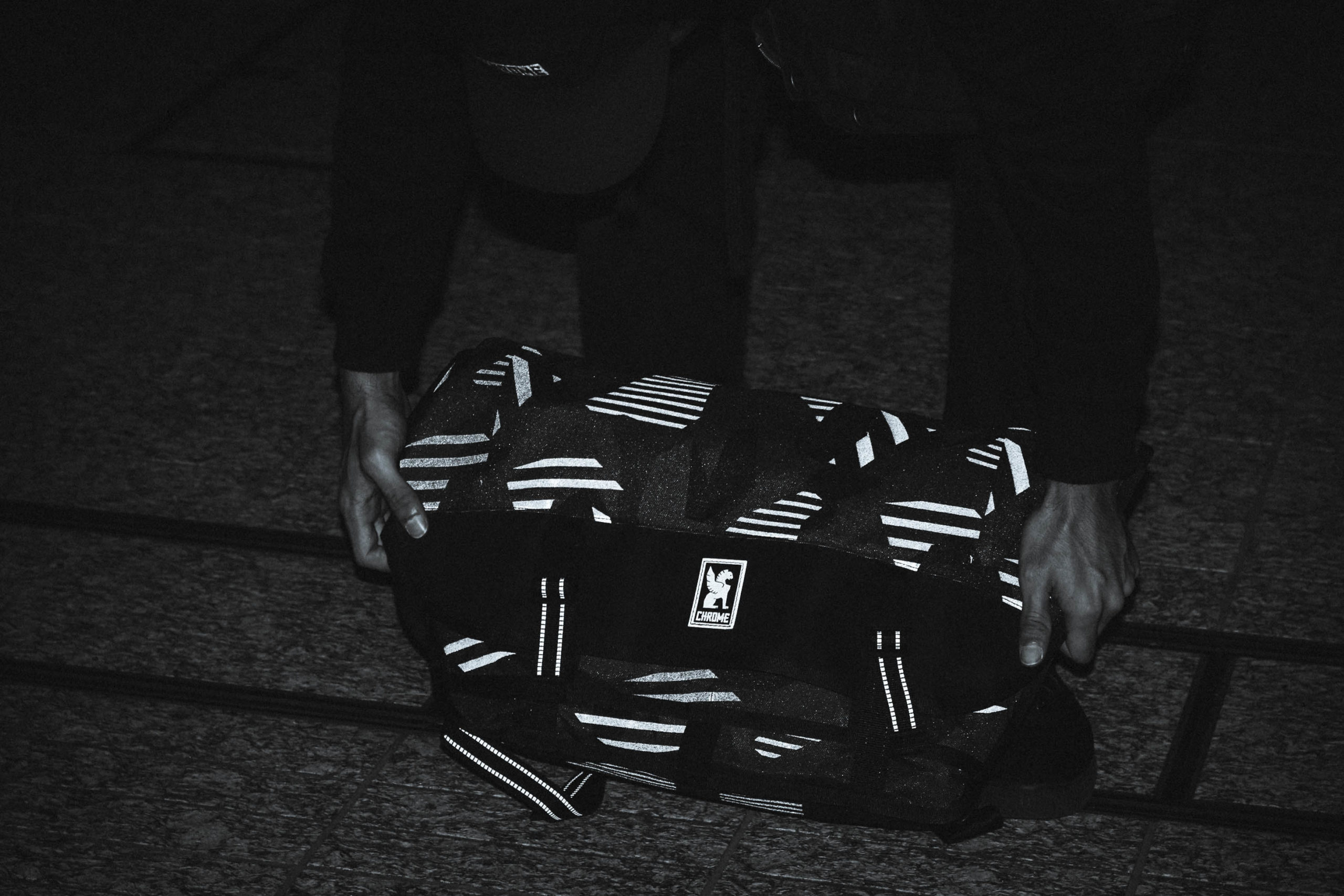 The Swedish Camo print is available on five of Chrome’s most popular bags: the Citizen messenger bag; the Barrage roll-top bag; the Doubletrack handlebar sling bag; and the Kadet and Mini Cadet Sling bags. 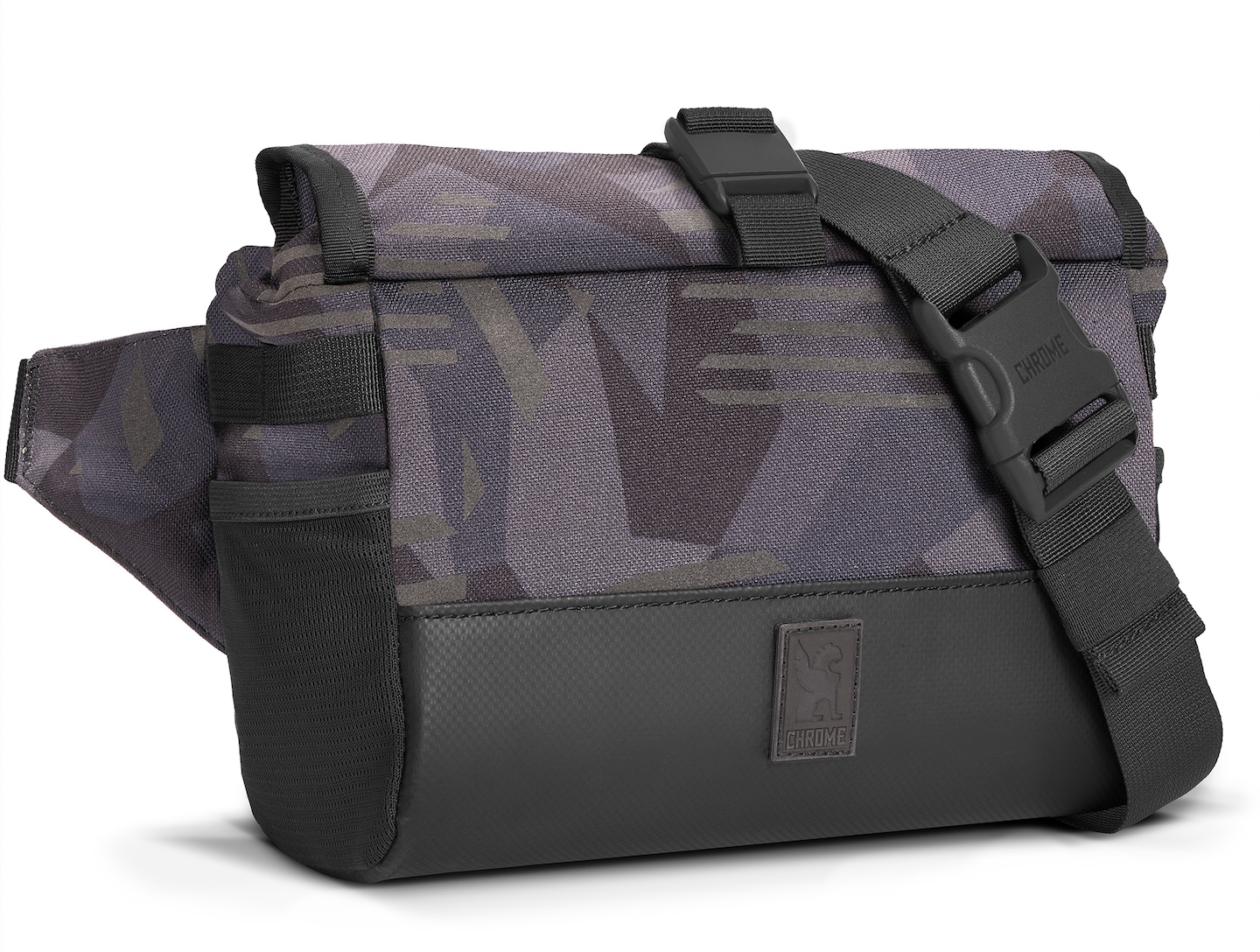 The Citizen and Barrage bags are the larger offerings, designed for commuters and riders who need to haul more gear.

The Doubletrack handlebar sling bag can be mounted to handlebars, or worn as a shoulder bag, eliminating the need to carry a backpack, or deal with a mounted bag that is fixed to your bike and hard to remove. 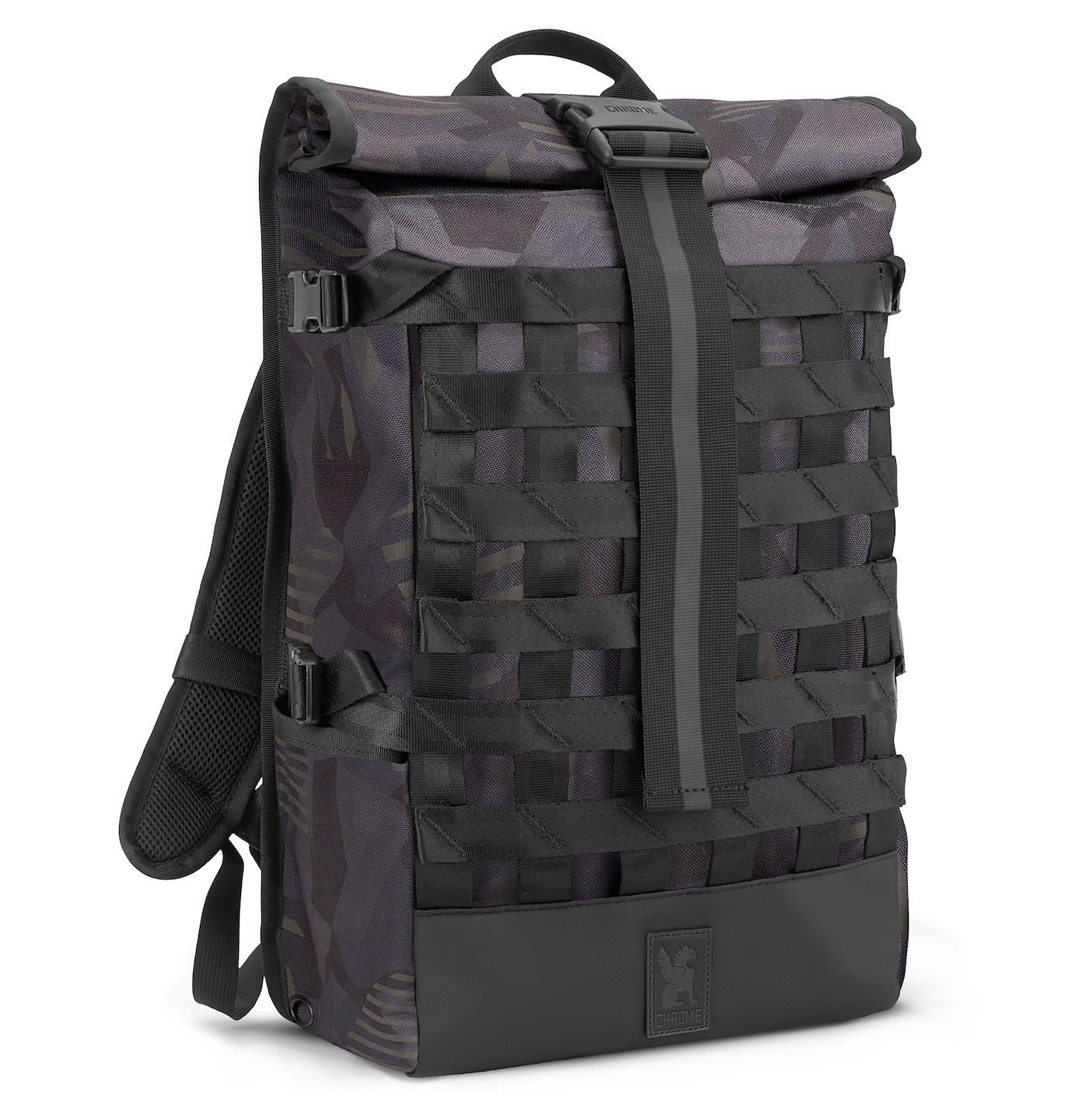 The Kadet and Mini Kadet are the smallest bags with the pattern, made to haul everyday-carry items like wallets, phones, and keys.

I won’t deny they look great, but something about a black bag is still a big no for me, reflective or not. Riding in the rain in daylight, I want high vis colors every time.