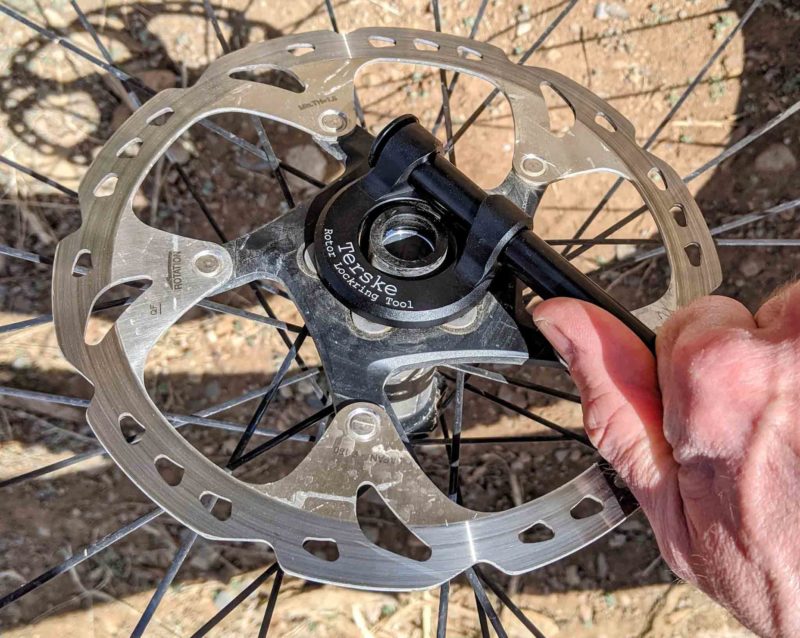 Depending on who you talk to, one of the arguments against the Centerlock rotor standard is the need for a big, bulky tool in case your rotor ever comes loose on a ride. We’ve seen it happen, and it can ruin a ride. Fortunately, the problem can now easily be solved with the new Terske Travel Disc Brake Rotor Lockring Tool.

The problem with making tools like this portable is that for it to work, you need leverage. Terske solves that problem by using a lever that you already have – a 12mm thru axle. Both of their new tools are designed to slip onto a 12mm thru axle and the axle then becomes the tool handle.

Of course, you probably don’t want to be using this with a carbon fiber thru axle or something crazy like that. But Terske says the tools are compatible with 12mm thru axles with a 3mm minimum wall thickness (6mm max. thru hole)…which is most rear thru axles on MTB and road/gravel/cyclocross bikes.

With that combination, the tool is rated up to 50Nm of maximum torque, which is plenty. Obviously, this is a hand tool, and you’re using a critical part of your bike as the leverage, so don’t overdo it…but it’s more than enough to get your Centerlock brake rotor secure again. 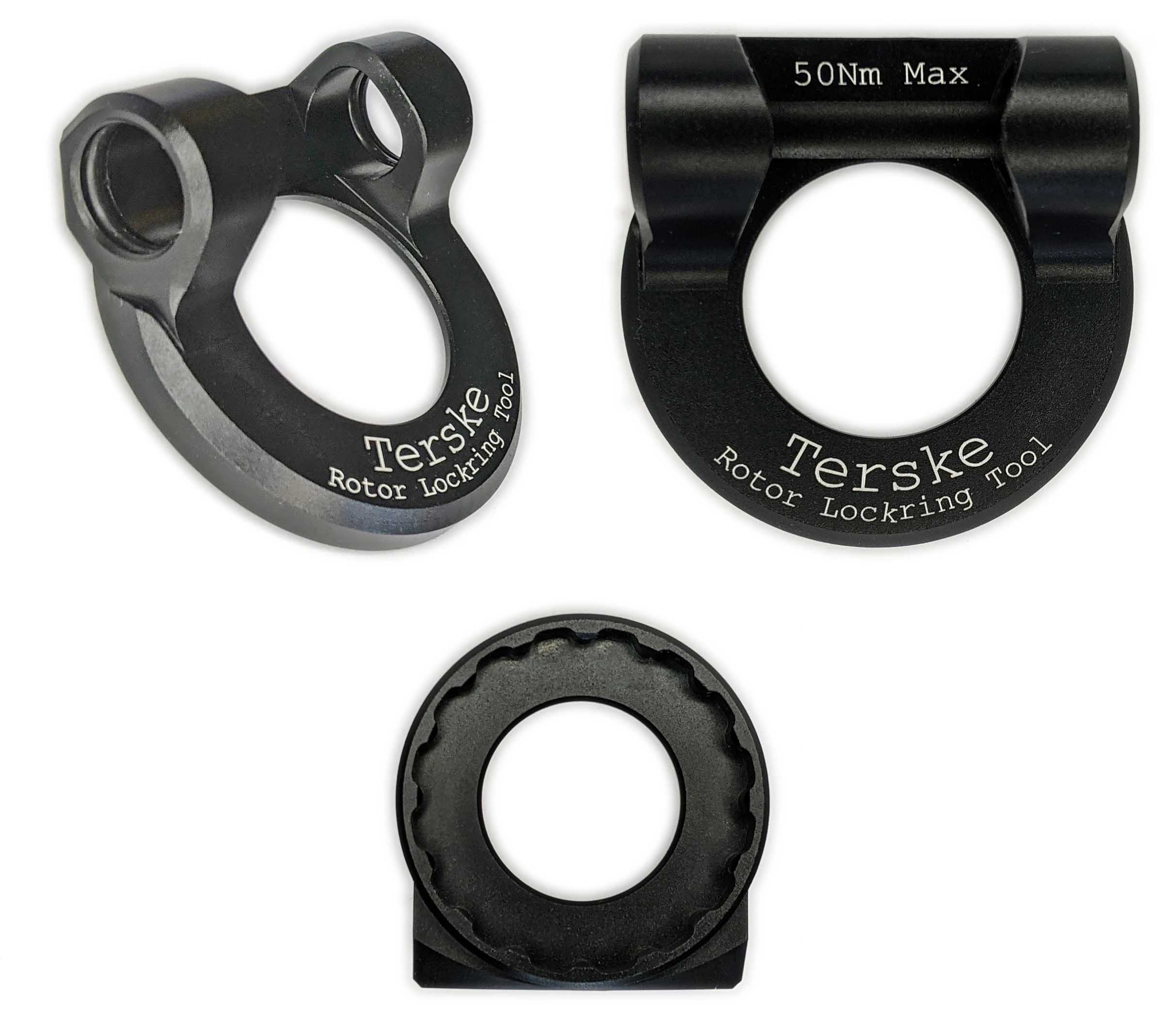 Designed for Centerlock and AFS rotor lockrings, the tool has 16 notches. It also features o-rings inside of the axle holes to keep the tool in place on the axle and prevent it from falling into the dirt.

The fit is very precise, and very light. It’s machined from 6061-T6 aluminum and weighs just 17g, making it an easy add to your tool kit. The Travel Disc Brake Rotor Lockring tool sells for $24.95, axle not included. 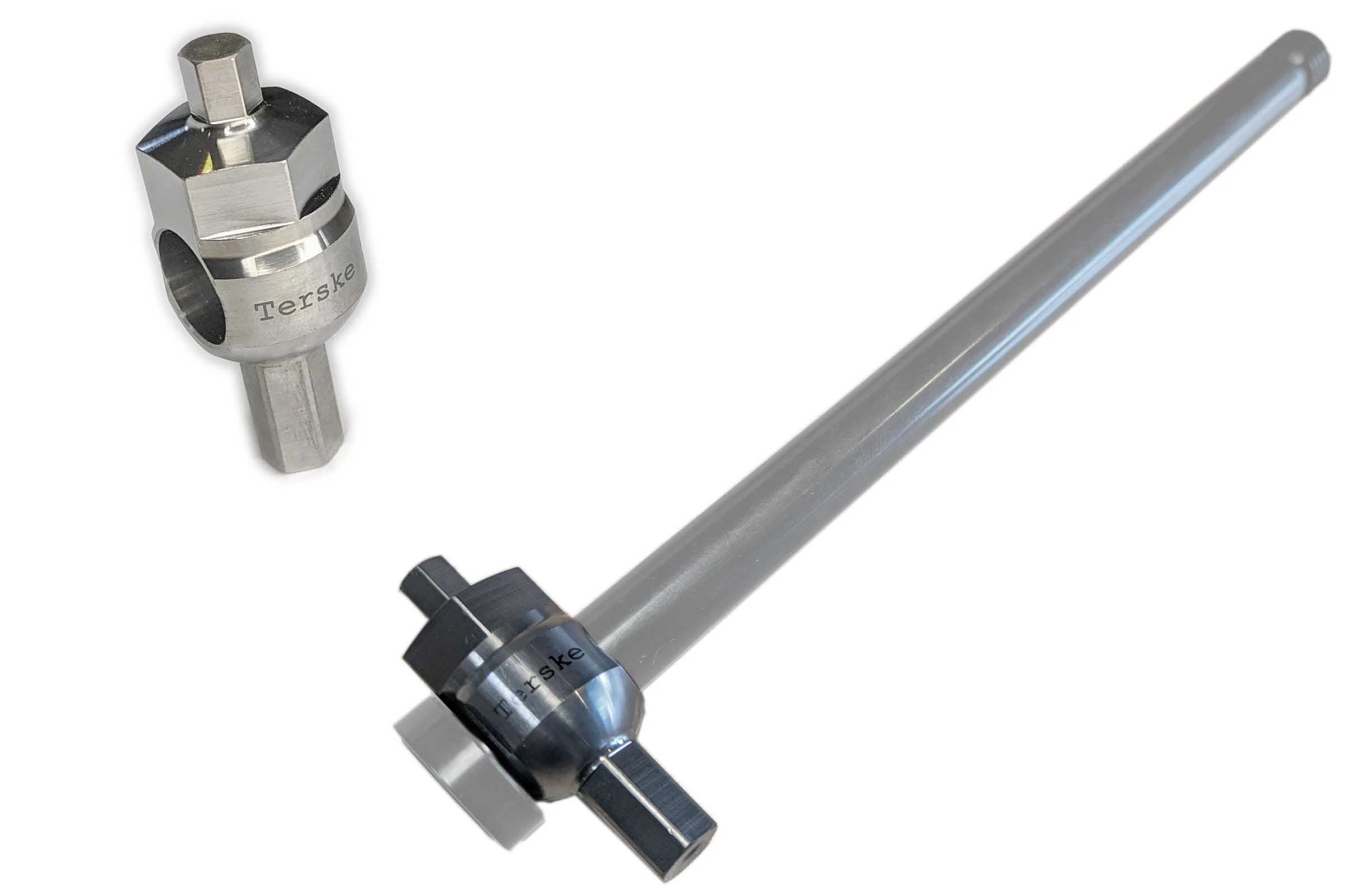 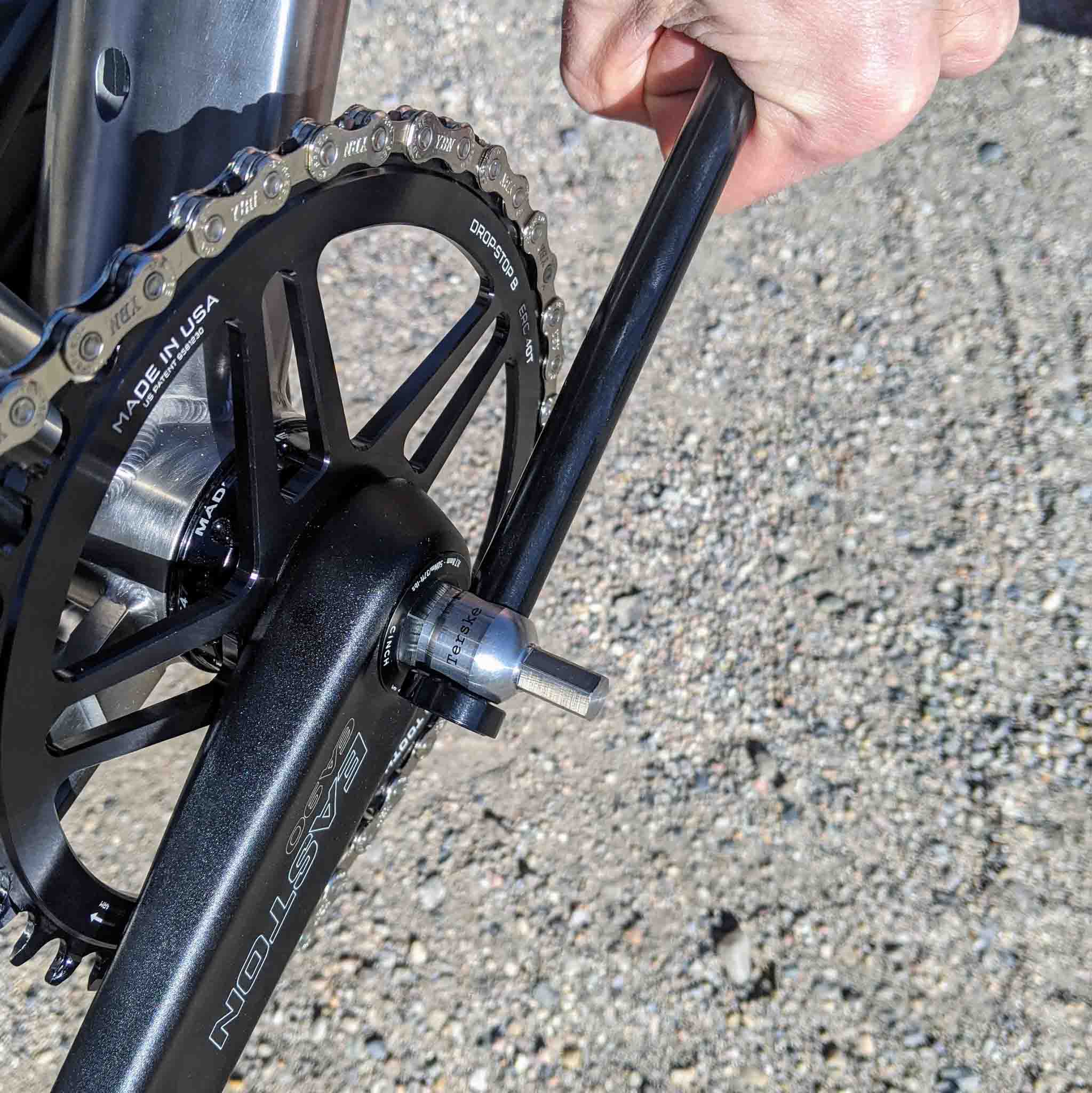 Another brilliant little travel tool using the same concept is the Travel 6/8/16mm Hex Tool. Specifically, Terske calls out RaceFace and Easton Cinch cranks which uses a 16mm hex key for the non-drive side fixing bolt and self-extracting caps, but the 6 and 8mm hex tools make it compatible with a lot more. 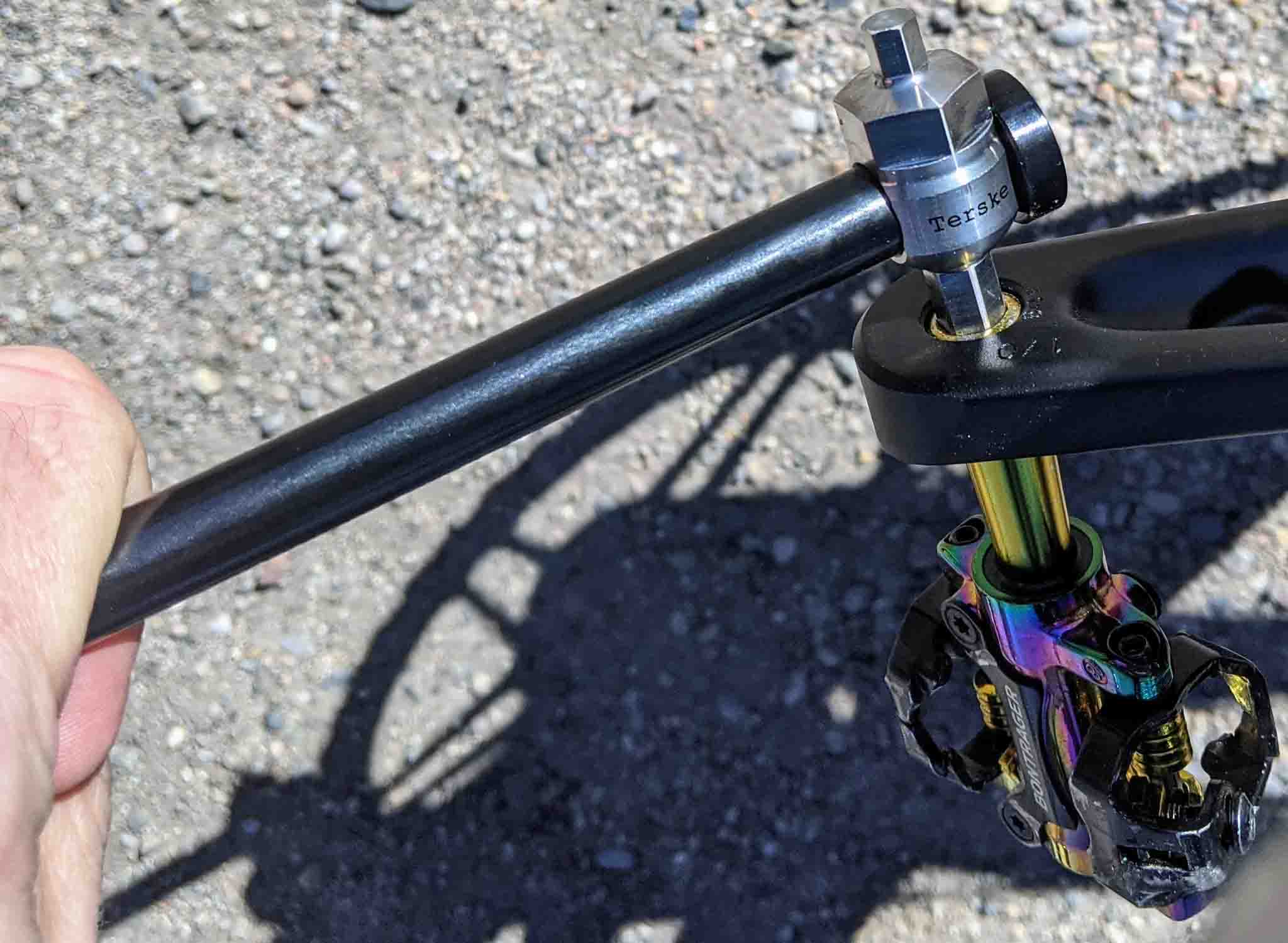 If you’ve ever tried to remove a stubborn pedal with a multi-tool, you know this can be a Herculean task. Like the Rotor Lockring Tool, the addition of a 12mm thru axle as the lever should provide the necessary leverage to get things moving.

Made from SAE 420 stainless steel, the tool weighs in at 36g, and is rated to 40Nm of torque. The tool requires the same 3mm minimum wall thickness for the 12mm thru axle, and sells for $24.95.

Please make an adapter for a HG cassette lockring (also used for some centrelock rotor lockrings)! Seems like an obvious addition. Would be great for bikepacking.

Yes! A Shimano-compatible BSA BB tool would be amazing as well.

+1, I’m 100% HG rotor lockrings and would buy this in a heartbeat. I have no idea what lockrings even fit the pictured tool, never seen them

This tool will fit any lockring with 16 notches, or, if you have a similar bottom bracket tool you can use that also.

Hmmm… you’re not the first to request that.

It will be an increasingly common request, with flat mount brakes there is a fair chance that the lock rings designed for 15 mm axles will foul the brake boss area on the fork. Means you can only use the slimmer line option (with a tool common to cassette lock rings.)

I can see using it with a tree branch too

This is a neat looking tool. I want one but alas my thru axle stuff is 15mm. Maybe they might expand this line!

Most all rear thru axles are 12mm 🙂

Why do they have an RT86 in the photo? Usually those don’t play nice with adapters. I can see things like that coming loose. Never had a properly tightened centerlock rotor come loose and I’ve installed many.

Looks like a well thought out tool, although I can’t see myself carrying one.

Dang it I feel dumb, yeah they are all 12mm shouldn’t post after a really long day at work!

Why not doing something similar (maybe with a 1/2 adapter ? To be able to use with bits and co ?) for seat posts ? Should handle much more torque, with a minimal weight penalty.

This blows my mind. I didn’t think there was any ideas left out there for tools. I can foresee a combination of these and maybe another one or two, all fit together into one piece. Throw a small multitool, and one of these things for the bigger things, and you’d be set. Nicely done.

Then carry a spare thru-axle because once you bend it, good luck getting back through the wheel. Also, I have never had to stop to tighten a center lock rotor. Another solution looking for a problem.

So you are guaranteeing that all tru-axles can handle the stress of being used as a wrench and if someone uses your tool and damages theirs, you will replace it for them.

@joenomad, I have had this issue–usually after a long gnarly downhill ride, glad you’ve been lucky, but it is a pretty nifty solution for a real problem.

Wow that’s so clever. I want one for my travel kit.

Here’s another idea – a slotted rotor truing fork that slips over the TA for leverage. I always bring a Birzman on longer trips because I’m paranoid, and they’re heavy.

Ok, this is crazy but: a TA pump. Use a hose for the chuck. just kidding

Yes, rationalism is the answer! Never make a mistake and you won’t have any problems! 😛

Don’t ride your bike and you won’t have to fix it.

They must’ve forgotten that thru axles are hollow and aluminum. I like tools. REALLY like tools, but I am on JoeNomads team… maybe if that axle were hardened steel?

Which do you think would put more stress on an axle, the weight of a rider and the forces of hitting things on the trail or road, or 50nm of torque from this tool?

@Shredder – I’m gonna have to go with B because most (if not all) through-axle frames have shoulders that the axle sits on in both the frame and fork, so the load on it is mostly clamping tension.

That said, this is still a really cool idea and you’re not going to bend or break your axle using it unless you’re a complete doofus. Definitely getting one for emergencies. #YMMV

I’m pretty sure that we didn’t forget.

Brilliant! Are there any European distributors or shipping to the EU? My touring bike only has QR skewers, but considering how portable this is, I’ll just buy a new axle and stuff it into that portion of my travel kit that you hope you will never need to use.

Thanks Bart! Unfortunately we had to suspend shipping to Europe: with COVID and the corresponding reduction in passenger flights (which small parcels often piggyback on) our options became either glacial or extortionate, and no one was happy 🙁
That said, eBay’s global shipping program can be competitive: they seem to palletize packages in the US, ship them overseas, and re-ship locally. There’s a buy on eBay link at the bottom of on the product page if you’d like to check it out.

Hi Marc, look out for an email from Mark at Gone Biking Mad, I believe I can help you on that and have been a fan of your other products for a while, lets chat.

Hi Marc, I think I can help you with that, keep an eye out for an email from me later today, and maybe we can have a chat about the UK and Europe sales and Distribution.

Exactly, Had it happen on the second lap down Captain Ahab years ago. Re-tightened by hand, then lightly “banged” it a bit tighter using the flat-blade screwdriver on my multitool.

This would have been SO much better, but since then, I’ve become a bit OCD on checking my centerlock rotors.

remember when 6-bolt rotors were way better than any other option, making all this unnecessary?
Oh, that’s right, they still are!

You’re still gonna need some way of tightening pedal to crank arm, which this post fortunately references. Conveniently skirts around the contentious issue of rim v disc brake too.

If people followed torque requirements no one would need this tool. Also, how do you properly torque the lockring with this tool anyway?

Thru axles see tensile loads only, unless they’re incorrectly torqued (so they aren’t even really axles). They’re there to clamp the hub axle between the dropouts.

I’m just amazed at the fact an actual person (the founder) from the company is responding to comments. That’s a one in a million scenario right there. The usual case is the peanut gallery goes nuclear and we never hear a peep from anyone even attempting to backup their products.

Impressive and yet such simple tool design. Much respect.