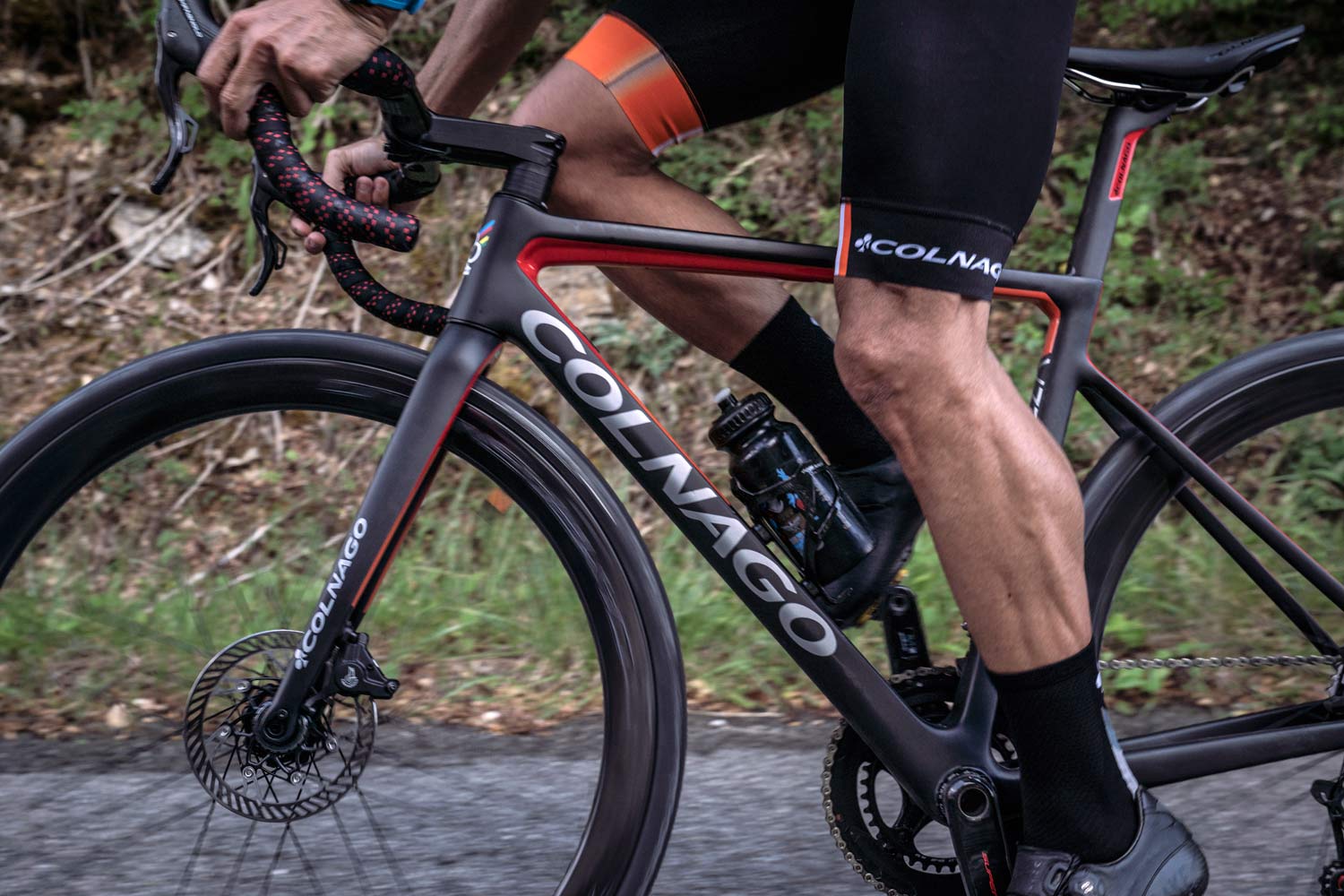 The new bike was developed to blend the best of Colnago’s lightweight V-series monocoque carbon bikes with the aerodynamics of the similarly constructed Concept aero bike. 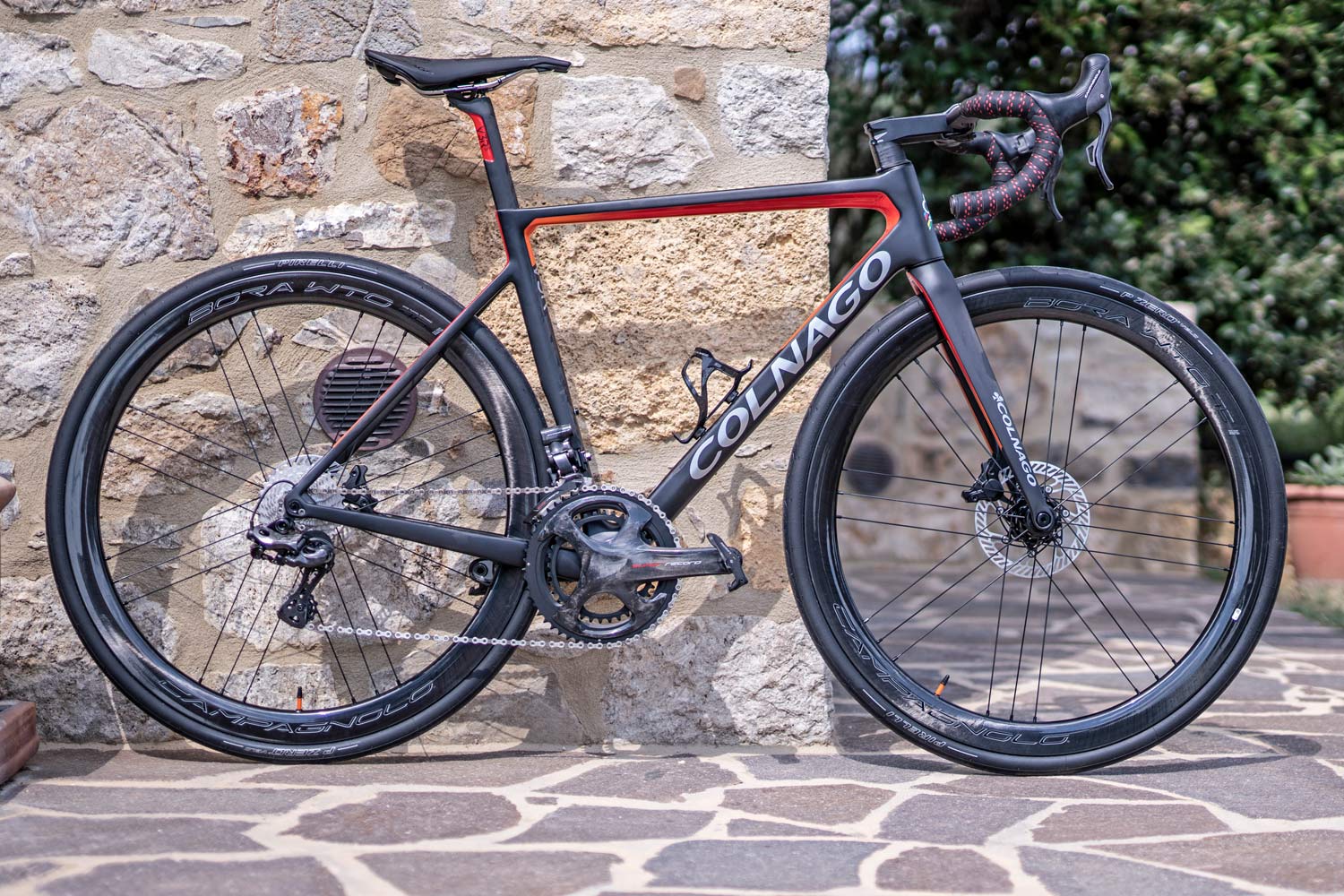 The aero concept carries over, but now only the tube-to-tube made-in-Italy C64 will forgo aero tube profiles. 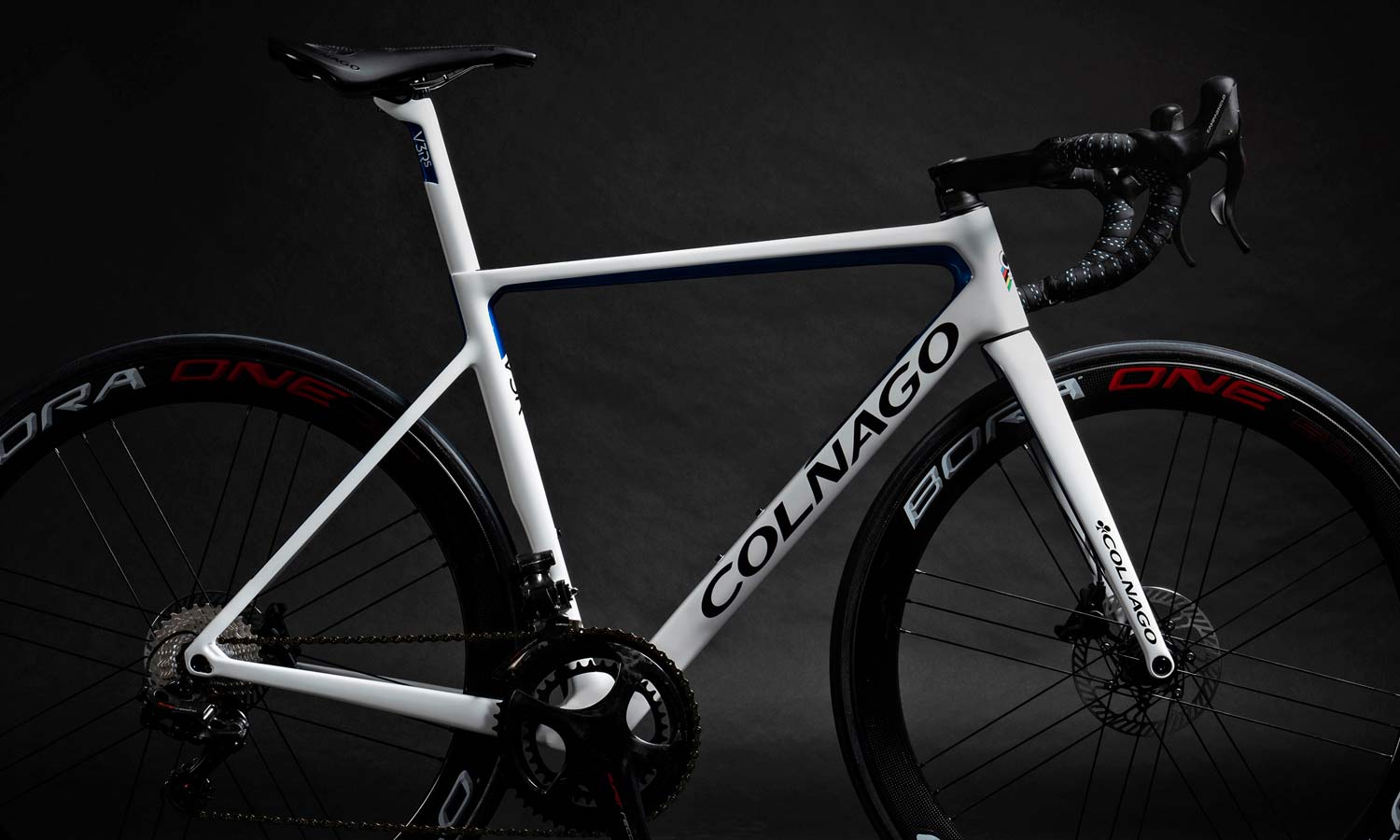 The most visually obvious change in the new bike is the move to the dropped seat stays look that dominates pretty much every modern aero road bike you can find. But maybe more importantly for real-world race & road riding use, the new bike adds in more room for up to 28mm wide tires with slightly longer stays & a small seat tube cutout – all of which promises more comfort & control. 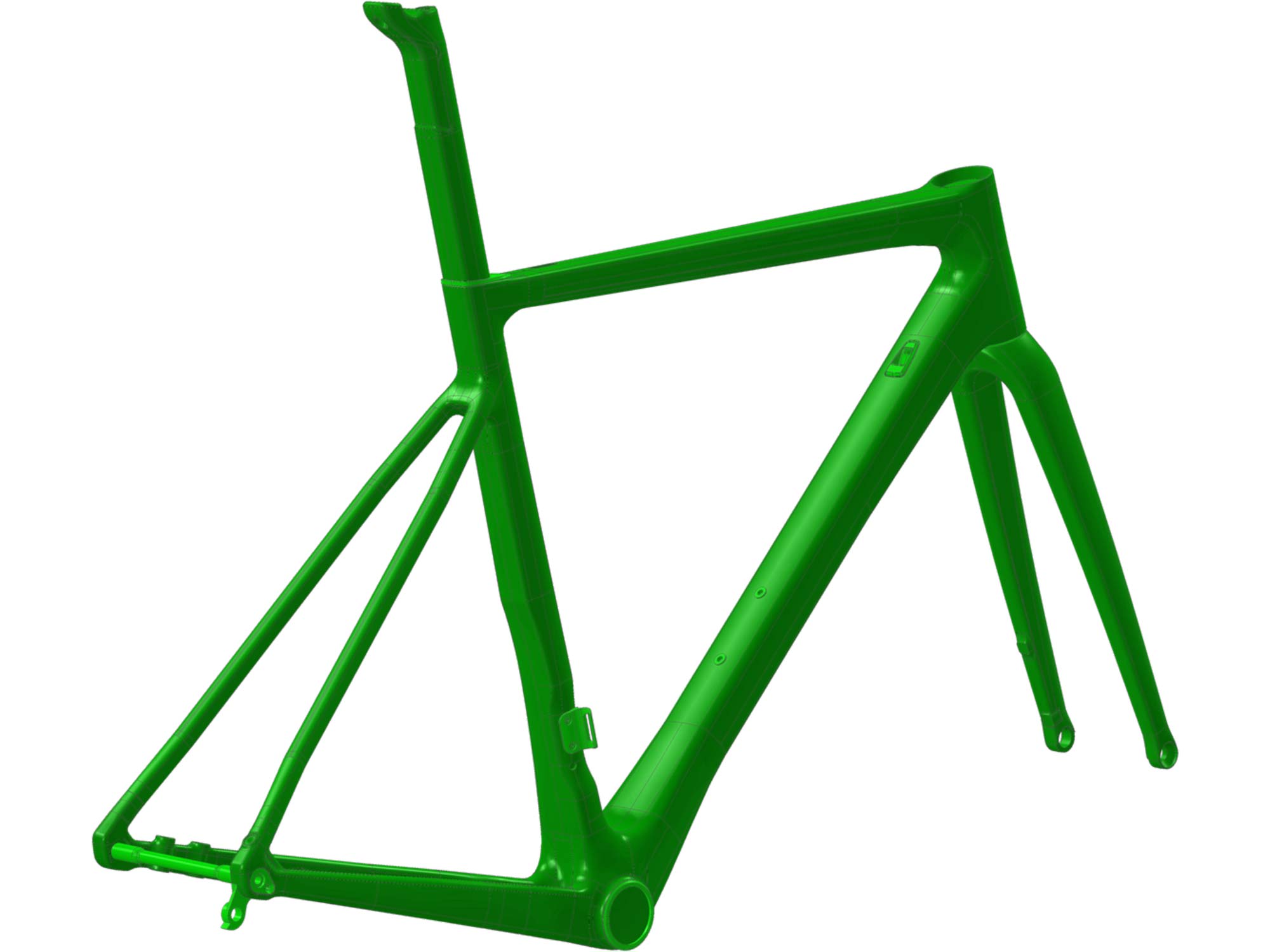 Weight for the made-in-Taiwan frame also comes down to just 790g for the medium (size 50) frame, before paint but with all the alloy hardware bits already attached. Colnago says the weight savings, even with aero updates, can be credited to a new carbon fiber blend that also give 12% more lateral rigidity in the rear, 6% stiffer at the headtube & more vertically complaint overall. 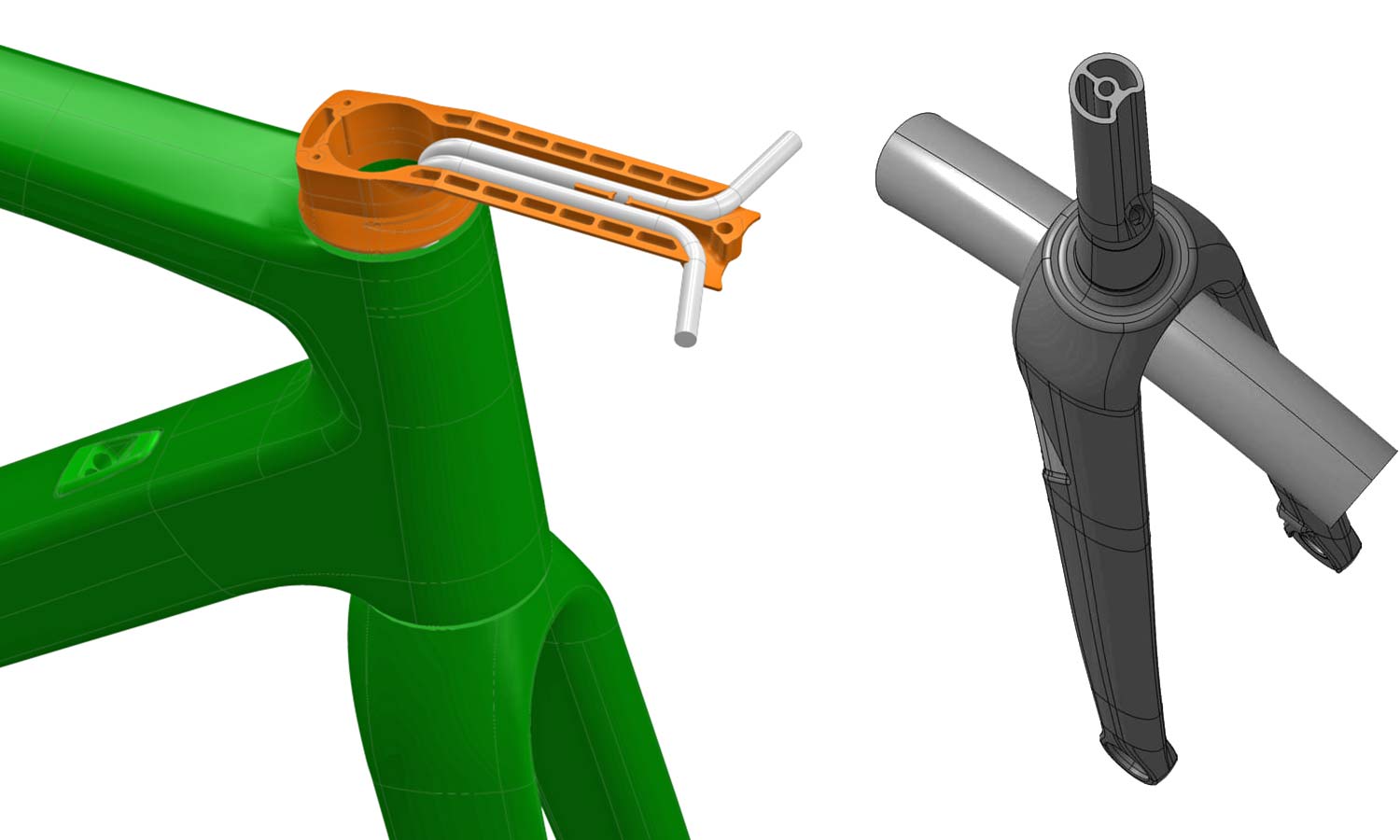 Up front, the V3Rs also gets an all-new tapered steerer carbon fork also to fit up to 30mm tires, and still just 390g uncut or 340g cut for a typical medium bike fit. The new fork molds threads into the steerer (no standard expander needed), and also features a sculpted steerer tube to allow clean routing inside the headset – completely internal for electronic disc brake bikes. 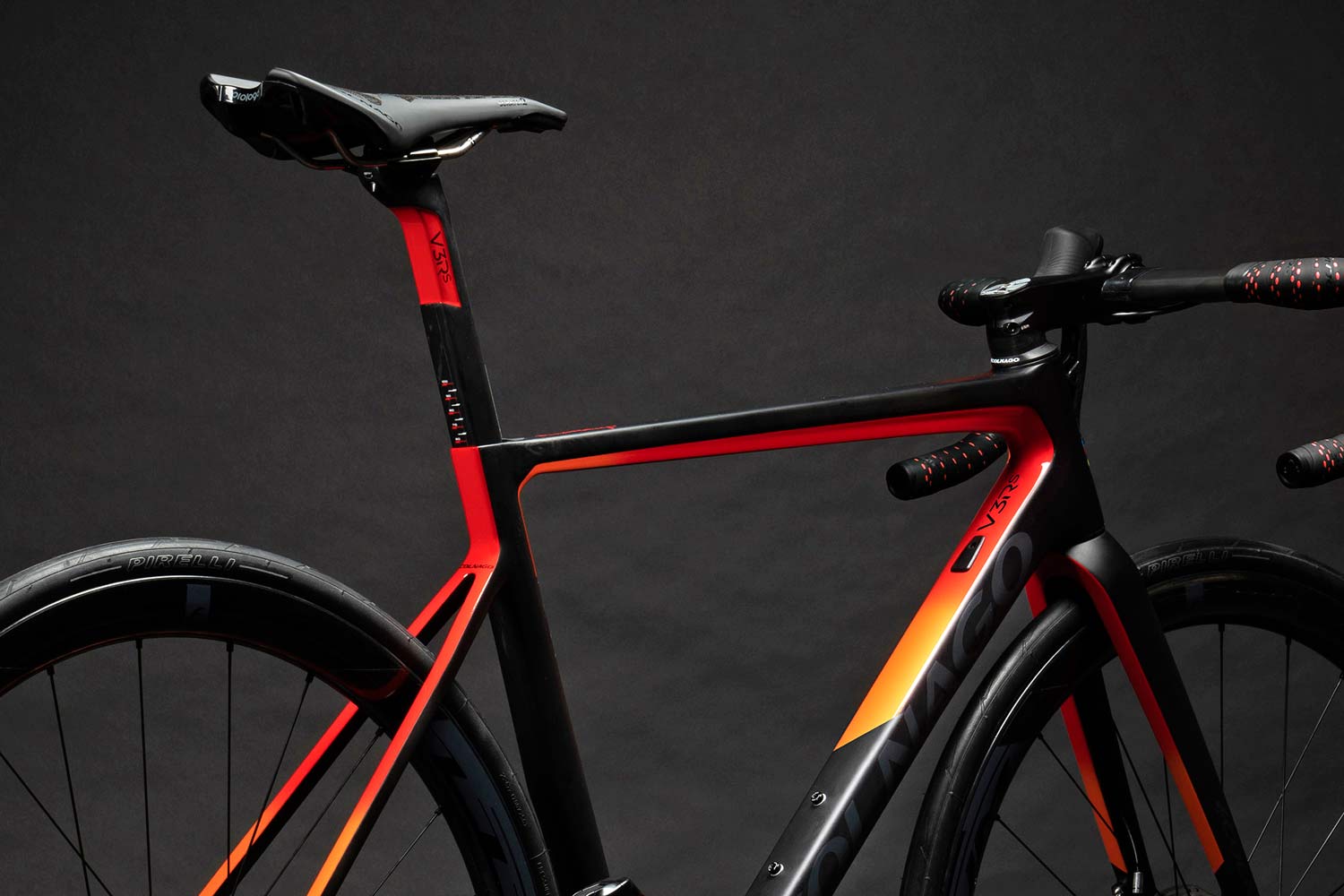 The new bike uses a subtle cutout section in the top of the seatpost, like we saw in the aero Concept, to incorporate additional comfort into the otherwise inherently stiff shape of the aero tubing profile. Interestingly the fork seems like it might get something similar, although just in the internal layup. 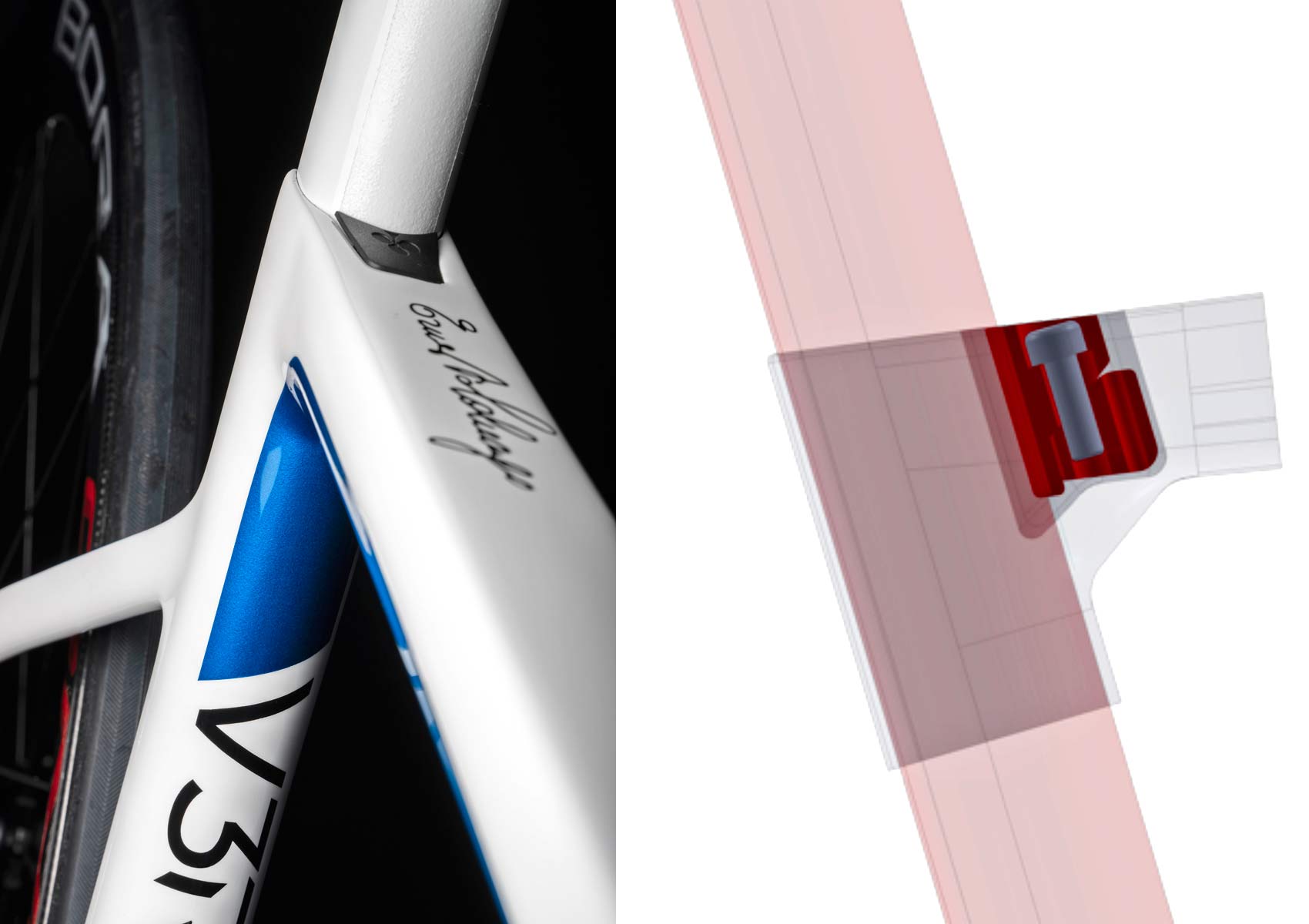 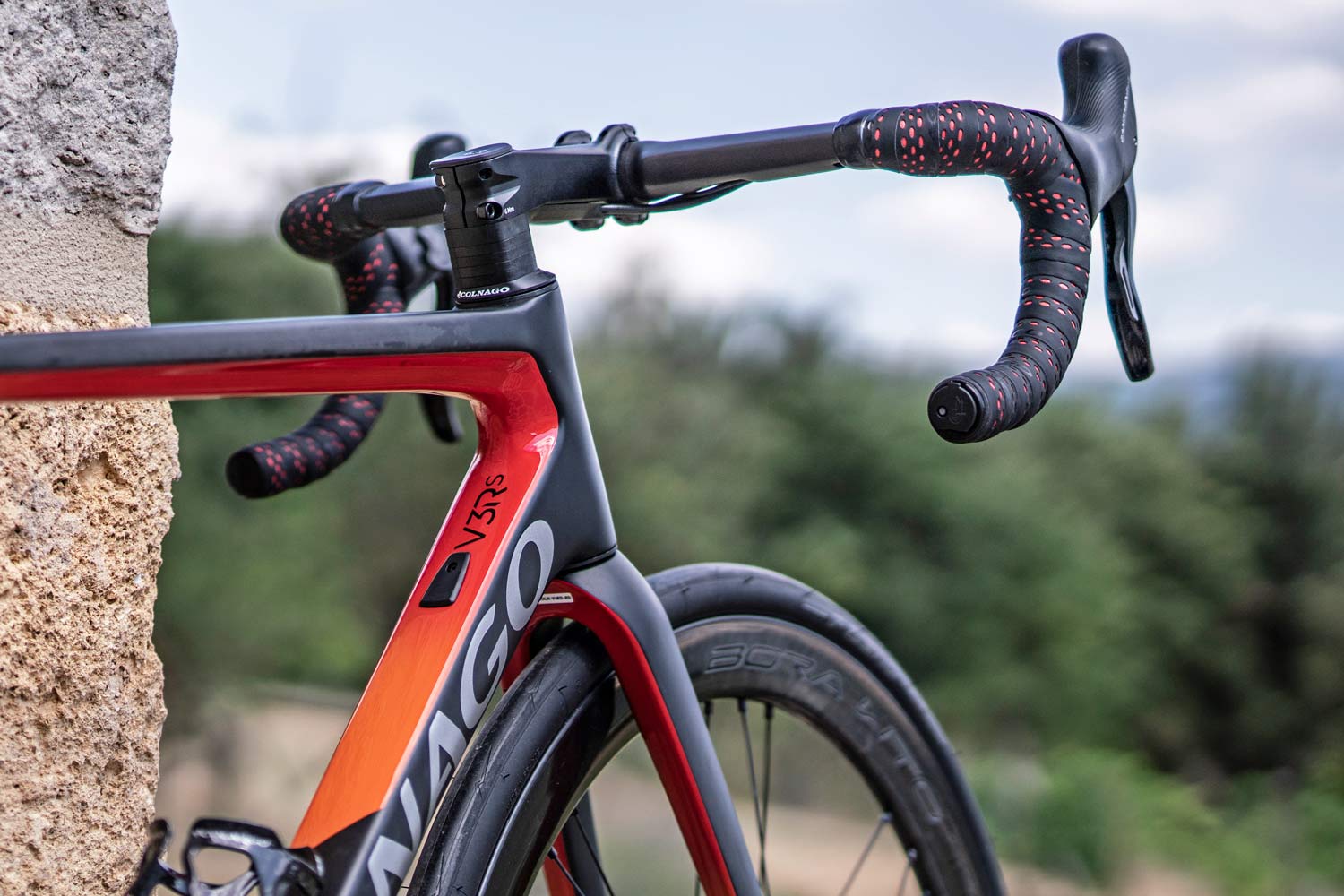 The new V3Rs Disc also carries over Colnago’s modular cable routing port in the top of the downtube for bikes that need some degree of external routing. 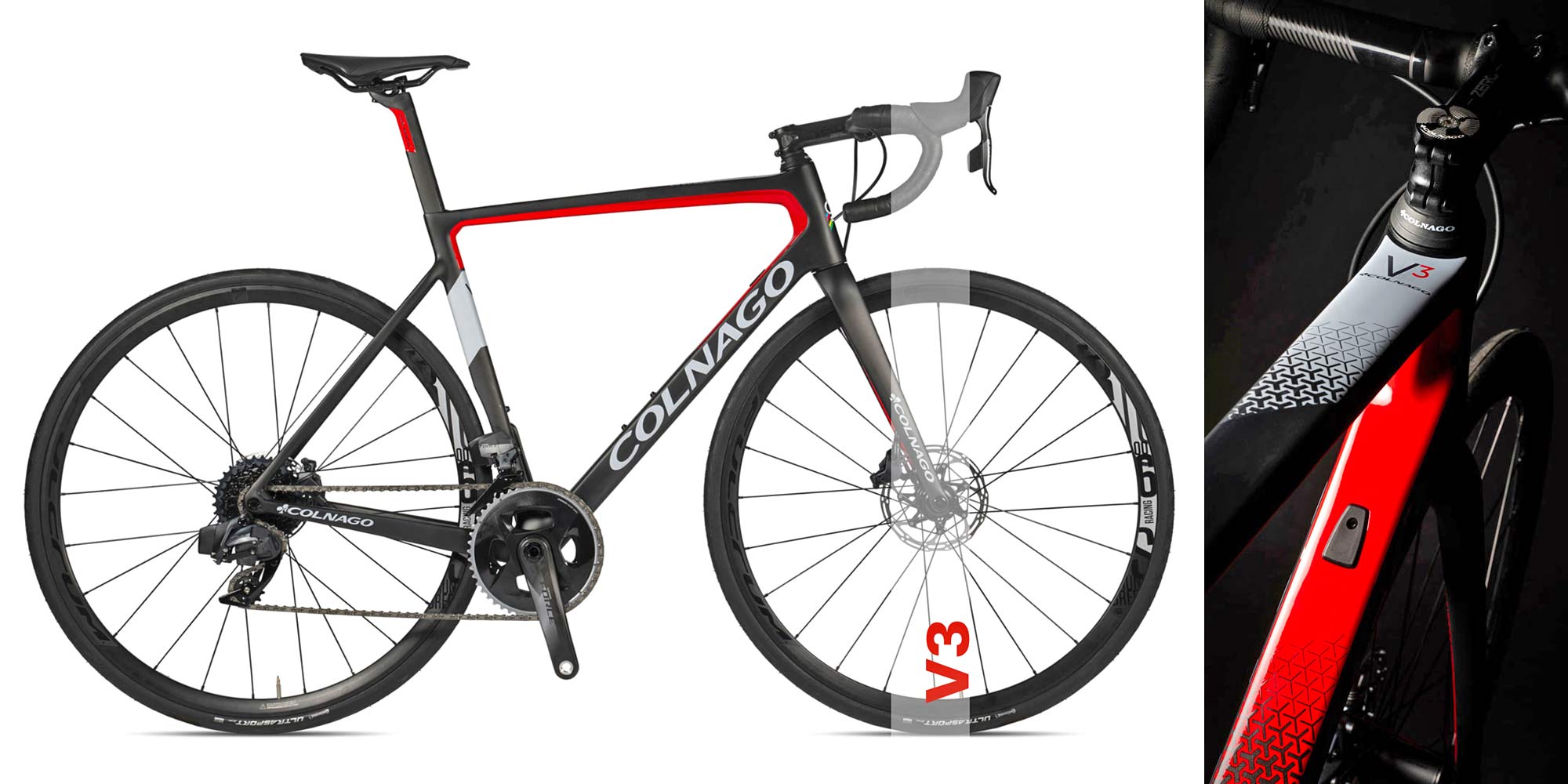 A more affordable V3 with a lower carbon spec, and some extra grams should also be available.

Like the V2-R and Concept before them, the new V3Rs is made in Taiwan in eight stock sloping sizes (42-58cm). Geometry is mostly unchanged for the new bike, even if Colnago does call the geo ‘completely redesigned’. Mostly there are modifications to maintain the same race-ready ride with slightly bigger tires. That means the headtubes are shorter because the fork is now longer, and it does get 2mm more BB drop, 5-10mm longer chainstays mostly on smaller sizes, a millimeter or tow of stack & reach change depending on size, and alterations to headtube angle that could be marked down as rounding errors.

What about rim brakes? 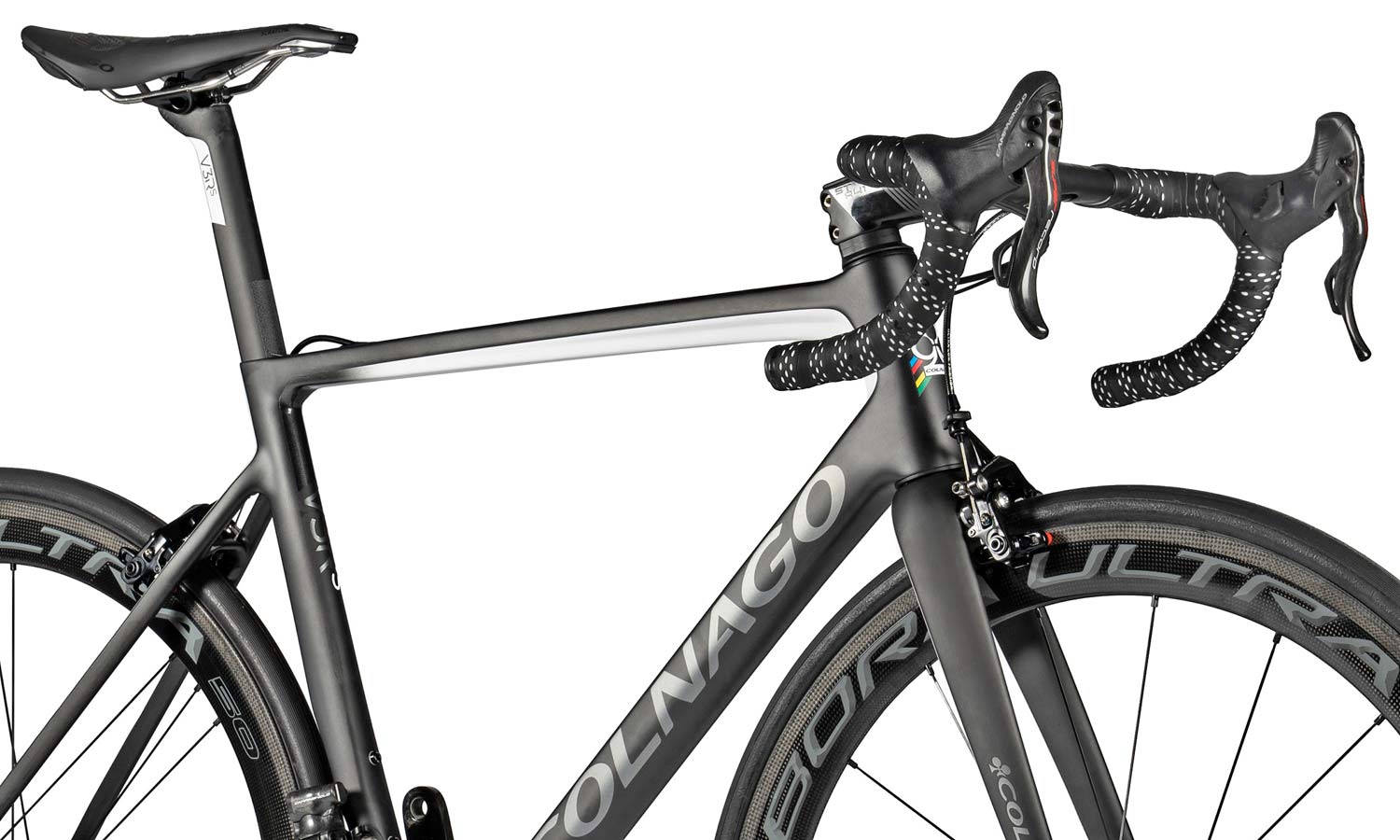 Essentially a single bike to cover both the fast sprint stages & long climbs of a Grand Tour, curiously the new V3Rs isn’t currently being raced at the Tour de France. They are still racing the V2-R & concept before today’s time trial. The conservative UAE Team still races almost exclusively on rim brake bikes, and Colnago says they just couldn’t yet get the team the number of rim brake bikes to be ready with enough extra time ahead of le Tour. 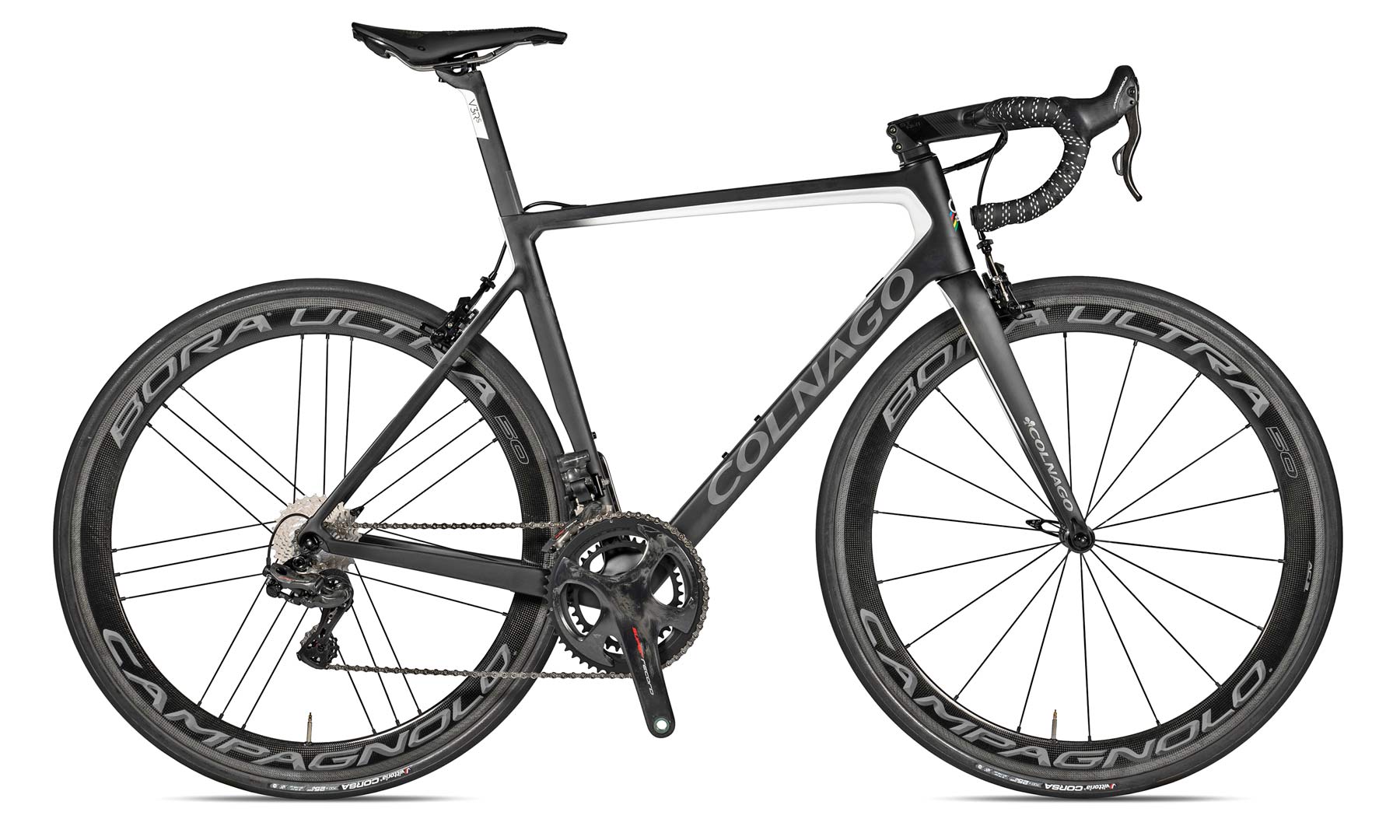 Even though both the V3-rs Disc and non-disc V3-rs frameset received UCI approval on the same date back in May 2019, the disc bikes seemed to be the first out of the mold. But now we have some photos of the direct mount, dual-pivot rim brake bikes as well, which should be available at the same time as the disc brake bike. 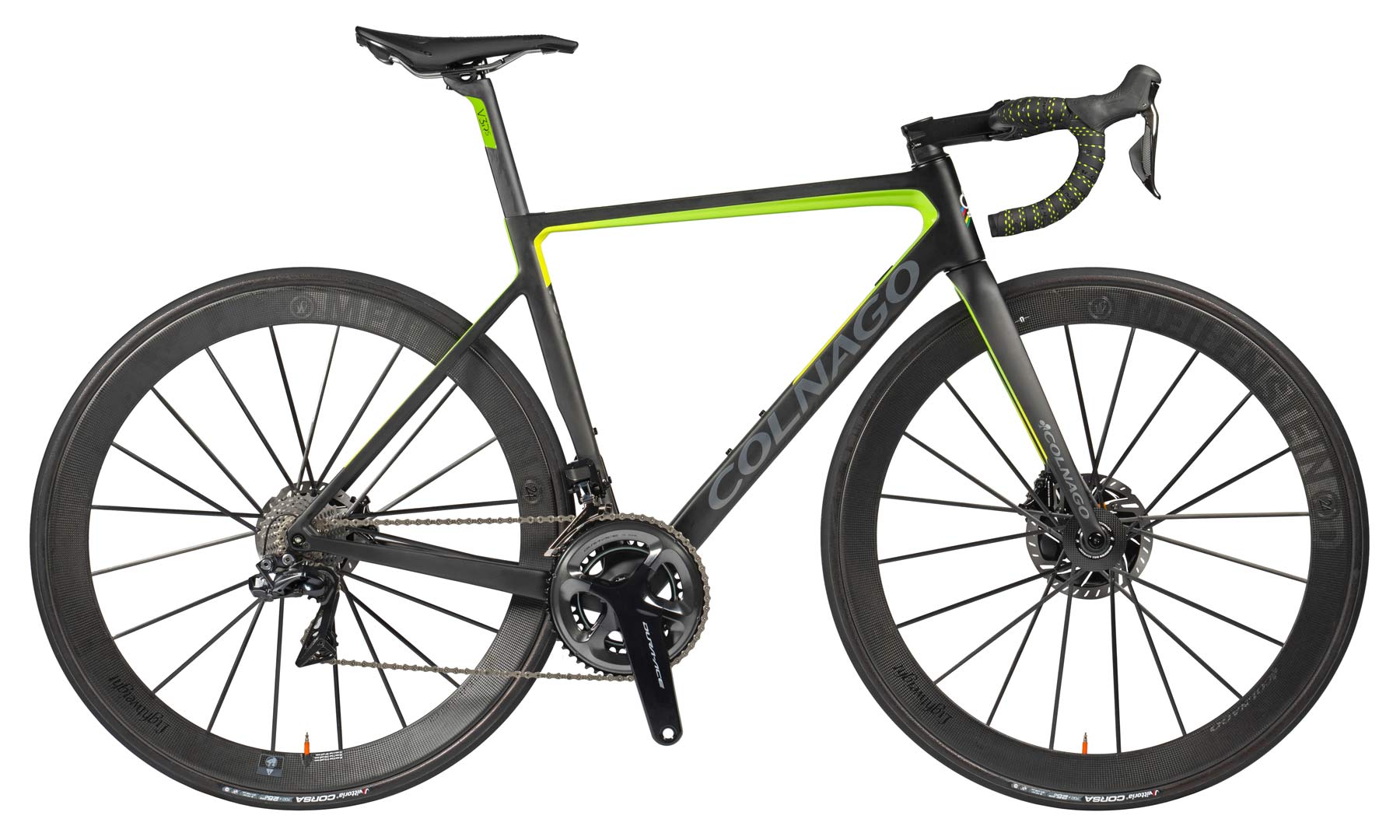 The new bike will be available in a number of premium complete builds that are sure to break the bank. Take your pick of Campagnolo Super Record EPS, Shimano Dura-Ace Di2, or SRAM Red eTap AXS and be prepared to take out a second mortgage. 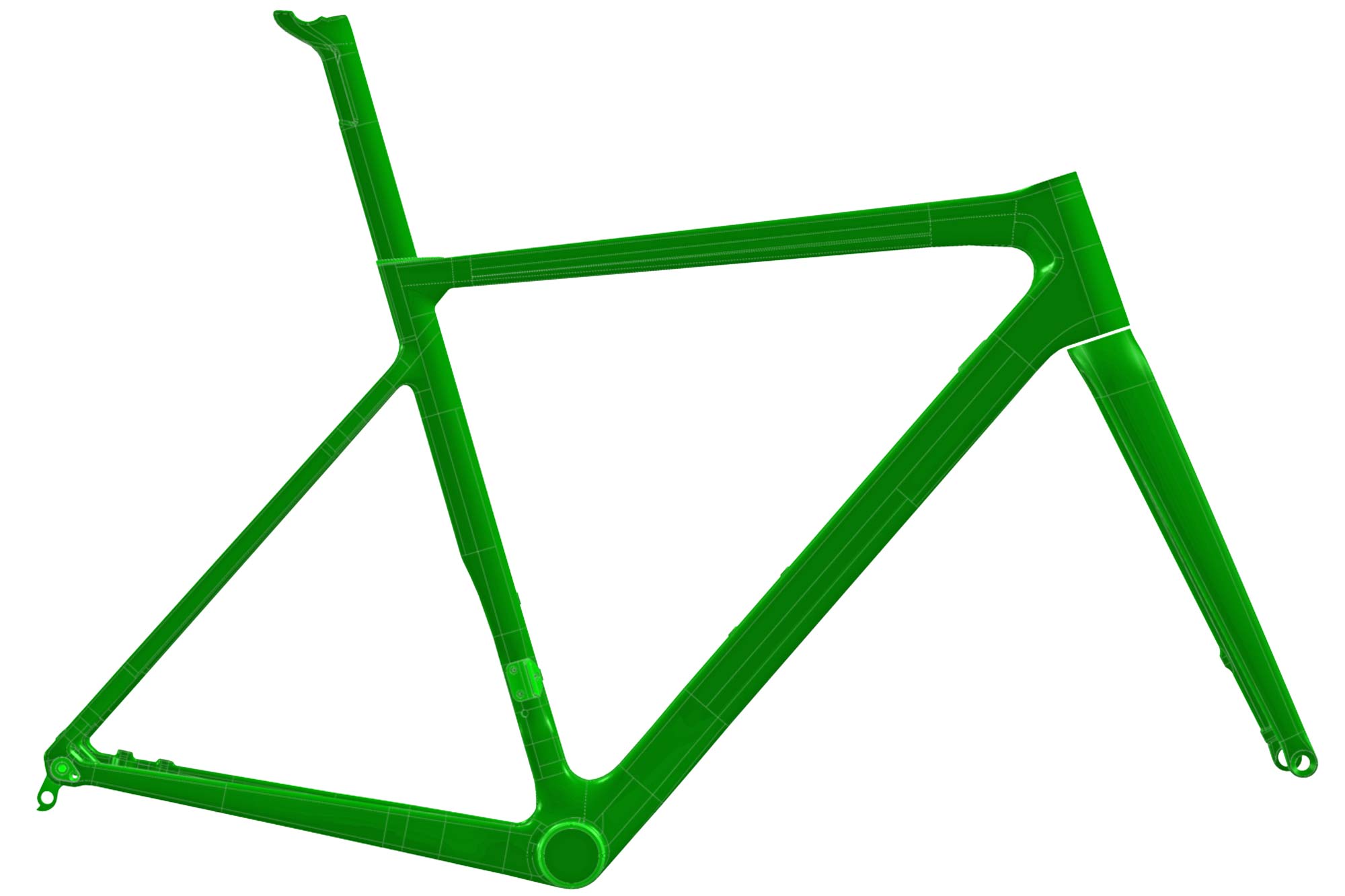 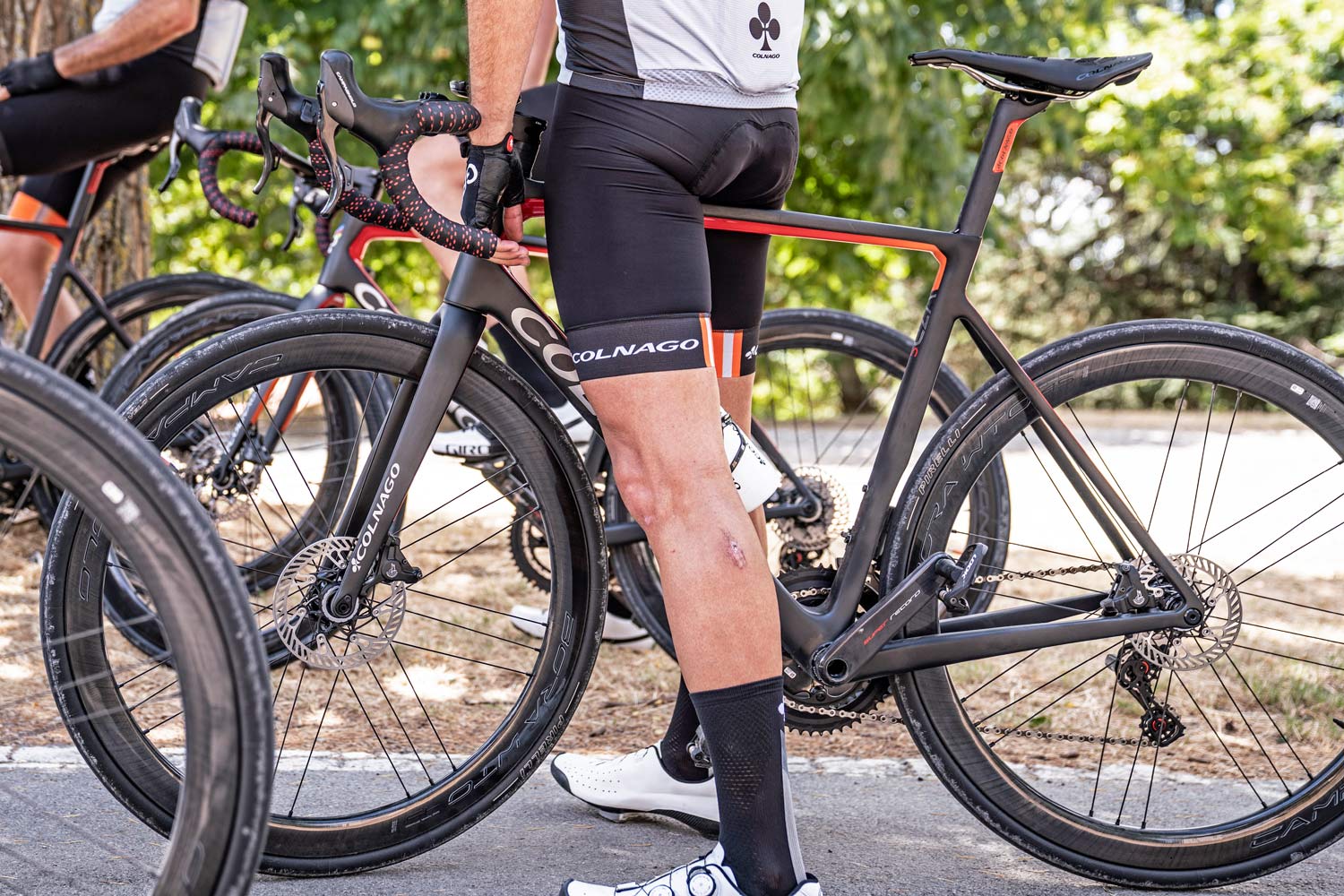 As for availability, the new bikes are being delivered to Colnago dealers now, so put in your order and be on the road in a matter of a few weeks.

I like that bright green paint job… when will that be available?

yep, made in Italy now it’s made in Taiwan

That’s been the case for many builders for a long time now. You’re better off getting a high end Trek, since they actually produce those in house. If you’re racing, “heritage” should mean absolutely nothing, it’s about results per $$$. Colnago charges a fair bit to get their name on it.

Colnago does a bit more than “get their name on it”. They do the design, the FEA, the CFD.. The only thing they don’t do is layup the CF and bake it……and maybe paint it. There is nothing that would make this frame any less worthy or have any less quality than a frame built in Wisconsin.

Most of the composite engineering is actually done by the factories. They figure out lay up details. The brands have some input, anything from equivalent level of design and verification through to just telling the factory a target cost and weight for the 3D shape and spec detail.

Ah, so you have the intimate details of how Colnagos are made. Interesting. Do you work for Colnago or the factory?

Or are you just generalizing without any actual knowledge of the specifics of how Colnagos are made?

I’ve been to a factory that makes them among other brands and factories. Comment wasn’t about Colnago specifically. More about how brands present what they do. The brands that have done the detailed composites eng can tell you about it.

This is how carbon bikes by big brands that outsource to China and Taiwan are made.

These days, it comes down to who you believe has the best design and engineering resources. The bigger brands have more in house, and much greater control over quality.

I’ve got a high end Trek. The frame label says “Assembled in the United States” and it’s manufactured in China.

Which one? The Madone, Emonda and Domane are made in Taiwan.

> You’re better off getting a high end Trek,
> since they actually produce those in house.

As far as I know, no Treks are produced in the US. I believe Trek manufactured 4 high-end models in Wisconsin from 2014 to 2016 before returning all production to Asia.

Trek are made by Giant. Bottom Line.

Hope it has better build quality than my last Colnago! The rear triangle was almost 5mm out spec followed by a 4 month wait for a warrenty frame to arrive. The whole experience would stop me buying another Colnago no matter how nice it looks.