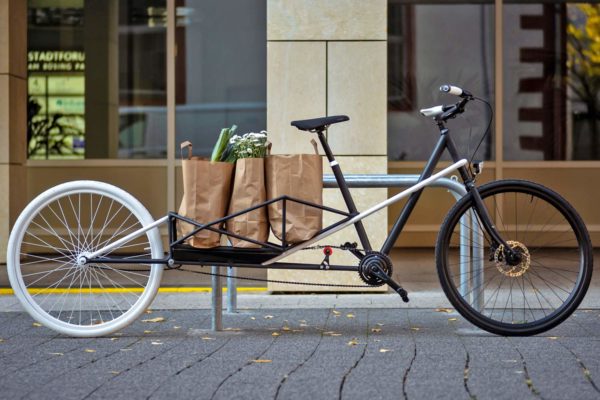 Convercyle is a new folding cargo bike project combining the hauling capacity of an extended long-tail cargo bike with the maneuverability of a conventional short wheelbase city commuter. The idea is relatively simple – fold the rear wheel back to extend the bike’s wheelbase & carrying capacity. But it is the clever pivoting solution & nesting rear end that makes it so easy to extend, maintains comfortable handling in either position, and opens up the possibility of pedal-assist. Now it just needs a Kickstart into production…

Convercyle, folding a cargo bike into a city commuter bike

The Convercycle bike is definitely unique, whether looking at it as a cargo bike or an urban commuter bike. The 2-in-1 folding design essentially give you the best of both worlds, load carrying capability, plus compact storage & regular bike handling when you don’t have a ton to carry around. And it looks to switch from one mode to the other in only a few seconds.

Convercyle: How does it fold?

How it works is that there is a pivoting axle in front of the rear wheel on the chainstay – in the extended cargo bike mode. What you have is essentially a one-piece rear triangle (much like you would find on a single pivot mountain bike) that pivots, rotating down & forward into the load basket integrated into the bike frame.

By releasing a latch that lock the rear triangle into place, simply lift the cargo bike above the pivoting axle, and the rear wheel swings forward, nesting into the cutout in the bottom of the load basket. There, the rear wheel again locks into place in the shorter position. The bikes we see here are a couple of different proof-of-concept prototypes, so how the Convercycle locks into both positions isn’t entirely clear. We suspect that is something the project team intends to dial in with funding from their crowdsourcing campaign. 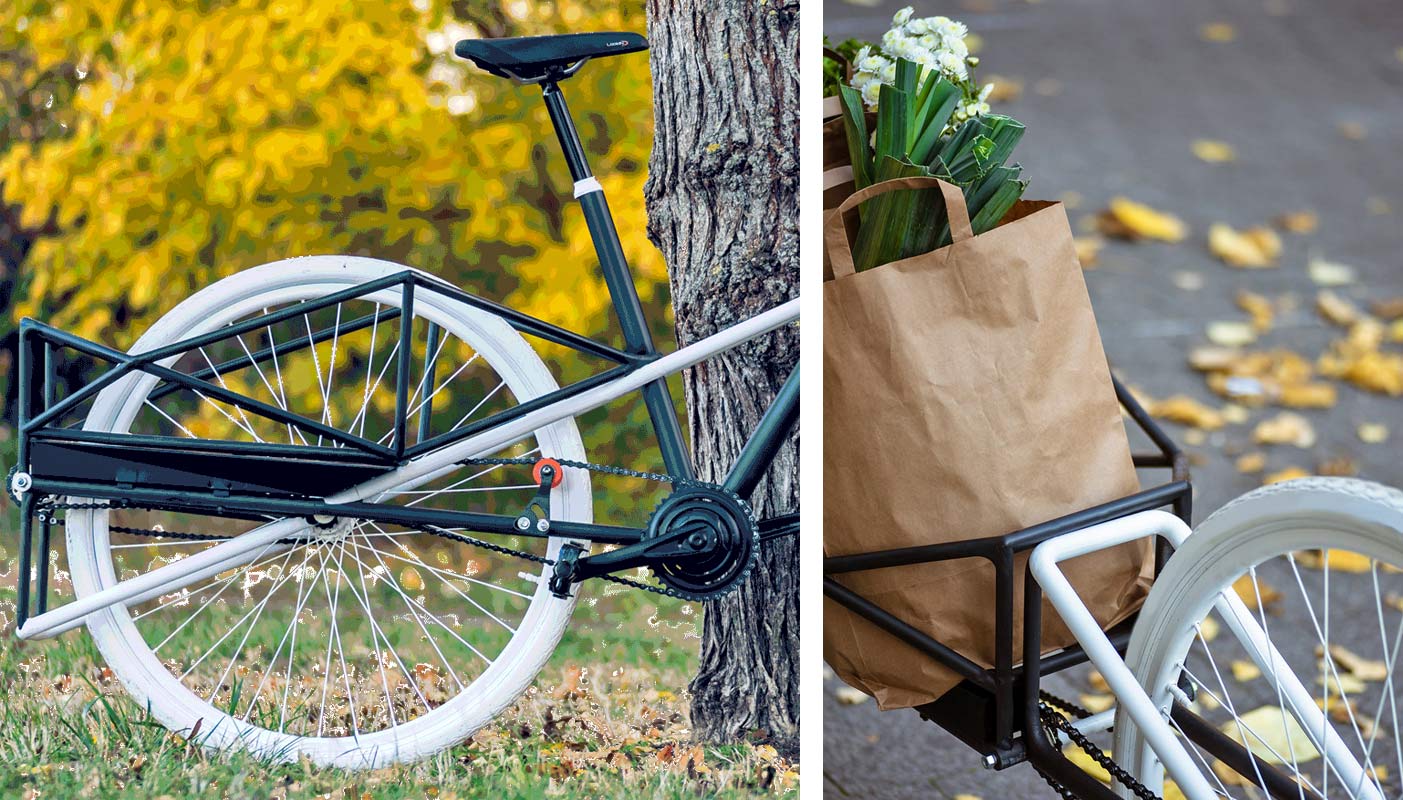 Drivetrain is another example. The early working prototype here used a left side drive setup that allowed for power to transfer from right to left through the middle of the pivoting axle. 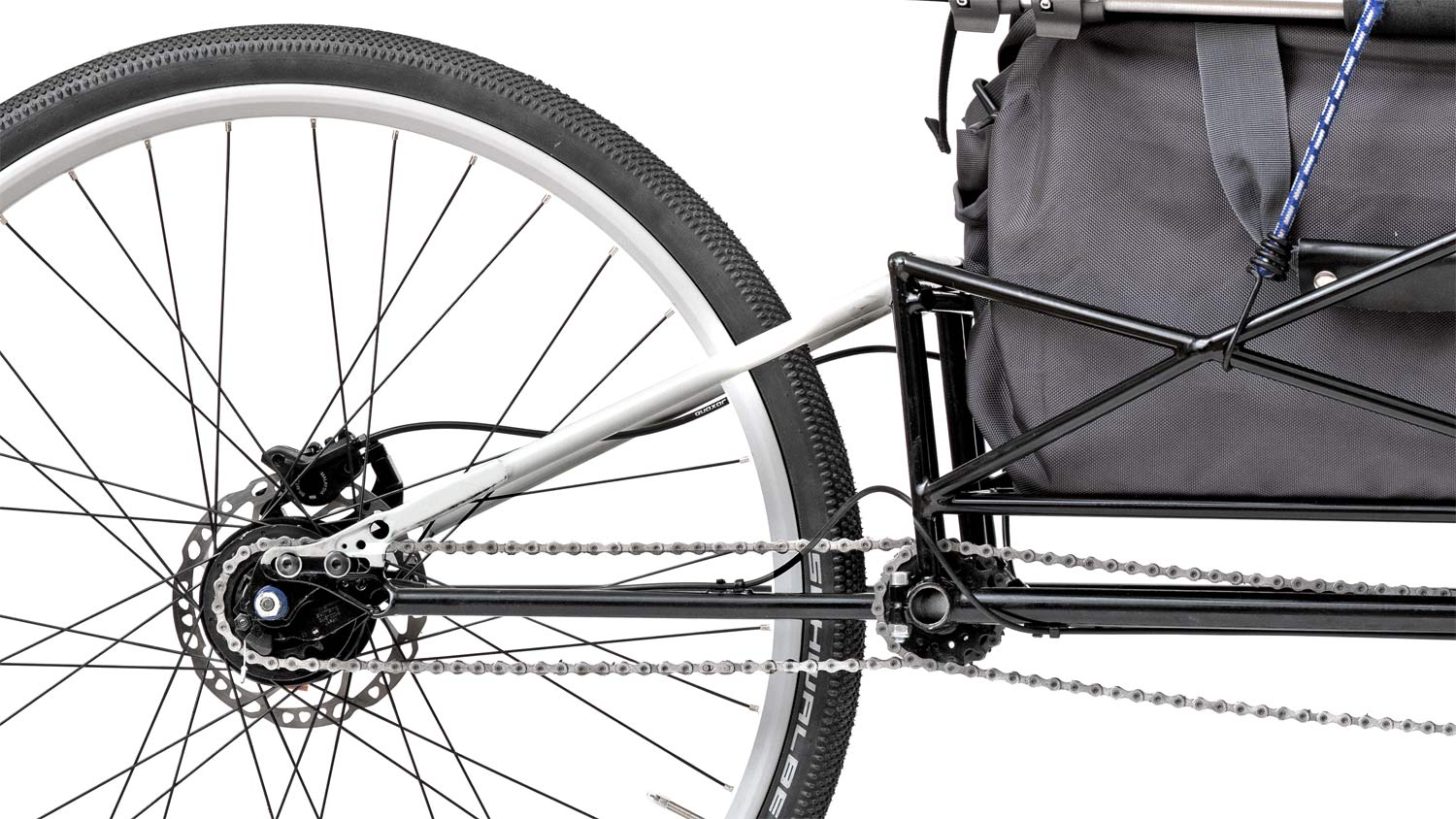 Later models show that they have refined this and will use a conventional right side drive that makes it easier to work with internally geared rear hubs, as well as a hub-based e-bike pedal-assist motor too. 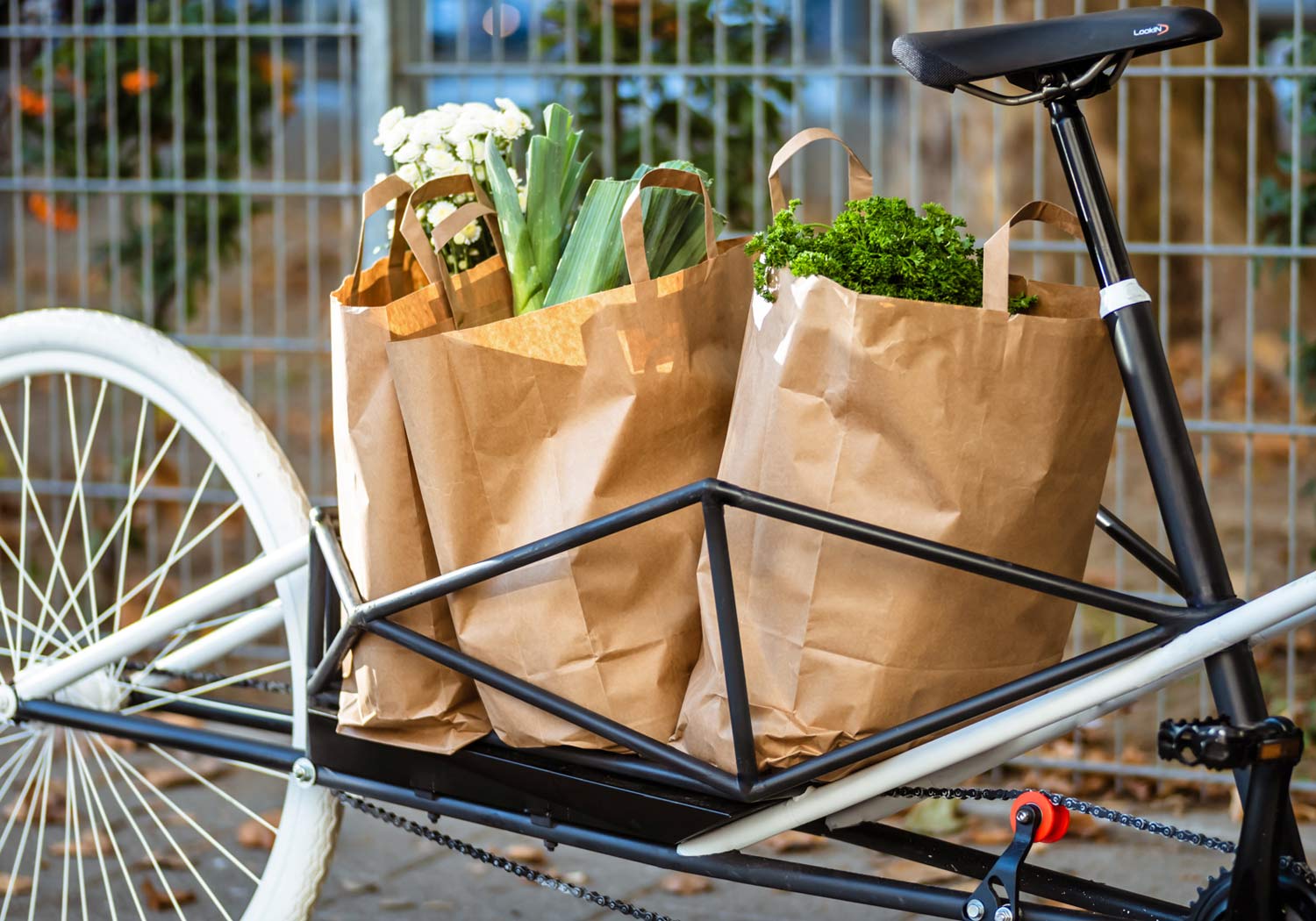 Final construction details on the Convercycle remain rather thin, but so far it is a brazed steel frame with its integrated cargo rack/basket designed to haul up to a 60kg/132lb payload. Current complete bike weight is said to be 18kg, and they are working to develop a lighter solution in an aluminum frame for the production bike. 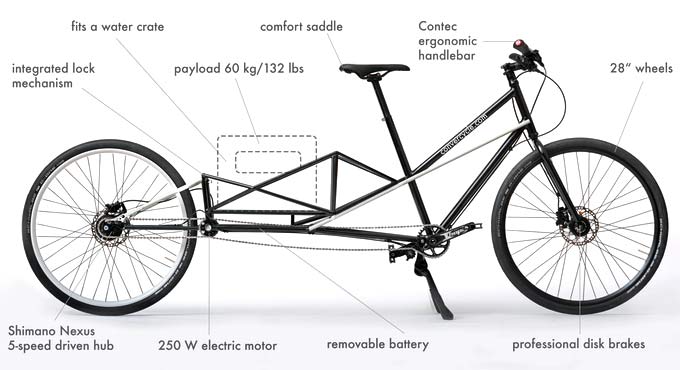 The folding cargo bike will be available with two drive options, a Nexus 5-speed hub or a 250W pedal-assist e-bike version. The bike will feature disc brakes, 700c wheels, and enough seatpost extension & an upright seating position to fit a wide range of adult riders.

The frame of the cargo basket is just 43cm/17″ wide making it more narrow than your bars so it is still easy to navigate in tight spaces, and to fit locked up in a standard bike rack. But that’s still wide enough to fit a few bags of groceries or a Euro crate of beer. There is even a closable  floor being developed for the cargo box.

Developed in Germany, the final Convercycle will meet local road standards which means it will include integrated front & rear lighting, as well as full fenders (with the rear fender obviously detachable so it can be ridden in both modes.)

The Convercycle is still a ways off from final production, but that is of course why its development team has gone to Kickstarter for funding. Just over a week in and they have secured more than half of their target funding, and are offering a number of buy-ins through the end of 2018. 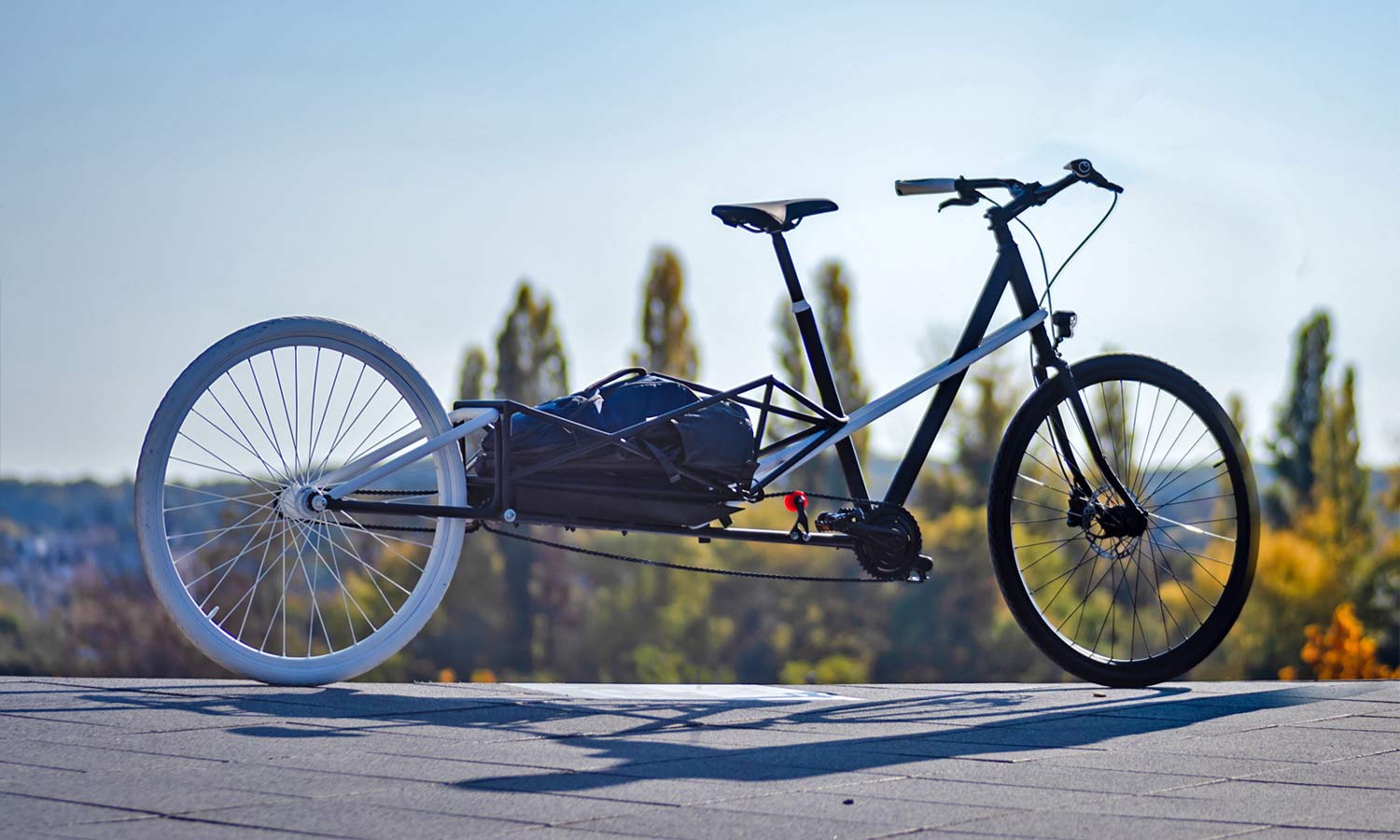 Today only, backing of 1000€ will get you the standard 5-speed Convercycle plus a Christmas special 3D printed model of the folding bike in time to gift it to someone special. Add another 200€ to get the Xmas special in its e-cargo guise. After these close out, in theory the standard Kickstarter rewards will offer the same pricing, just without the model. Convercycle’s development schedule estimates that the finished folding cargo bikes will ship out to backers in August of 2019, with this being their first bike project. 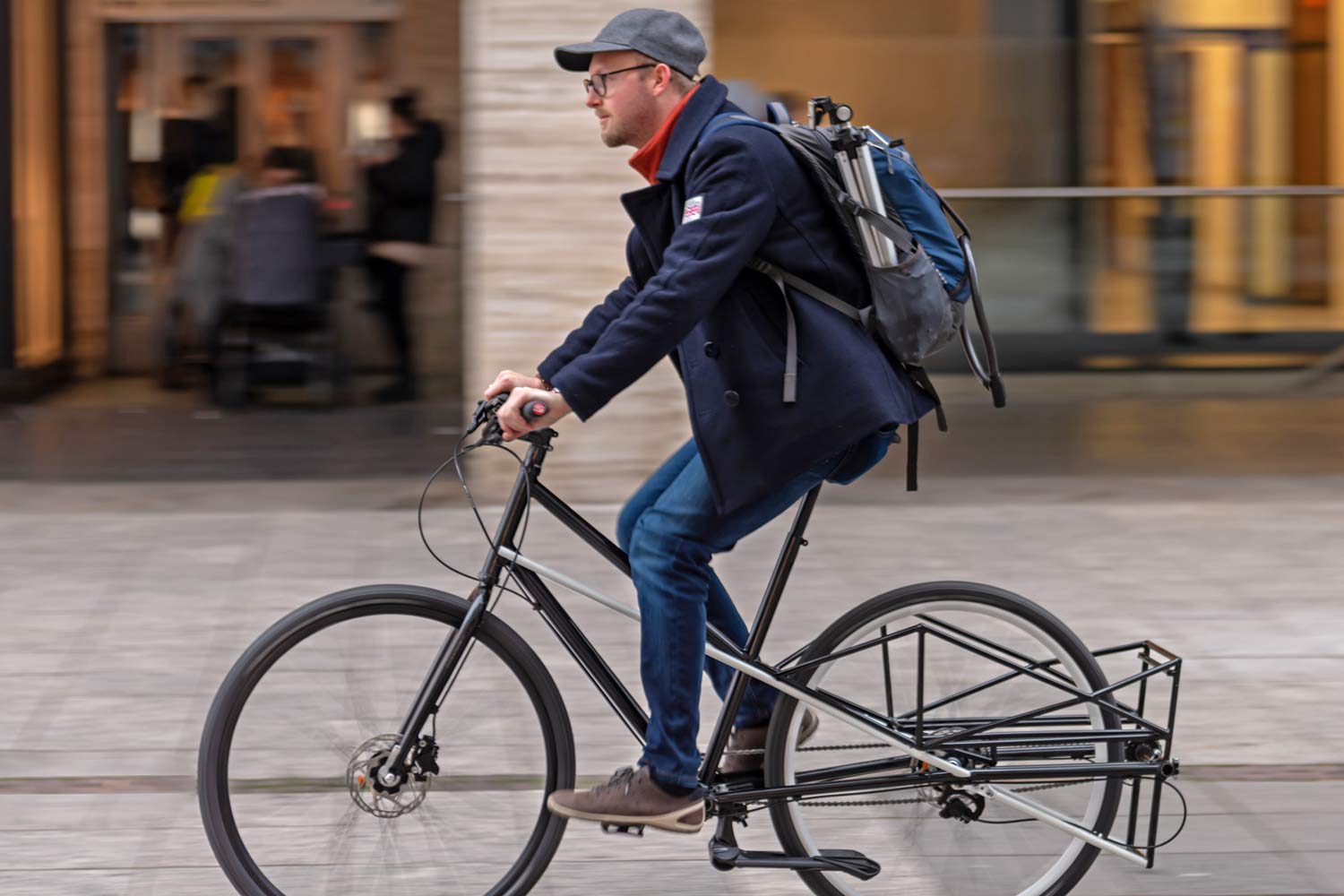 Back the project to get the best of both worlds, a folding cargo bike you can fit into the elevator.

It is great seeing new things. I loved that video too. Best of luck to you Convercyle.

Why do some photos show a top tube and others don’t?

It has been a LONG time since an “innovation” was innovative. This is a very cool bike, very smart. As has been said so many times in my life….sure wish I had thought of that.

Finally an article that has something that looks different from every other bike. Good, outside-of-the-box thinking with this contraption. There is a place for this.

Perfect platform for a tandem. Start with a tandem and quickly fold the back end in when your spouse wants a divorce which typically occurs within minutes of tandem usage

Looks great idea – but I noticed no one properly rides it in the video. It either moves magically by itself or rolls while a rider sits on it and doesn’t pedal. Reason is shown at 0.27: the chain is “pinned” together with a key-ring loop. :-O I presume the real one will be capable of being ridden…

Here you can find some videos in action
https://www.youtube.com/channel/UCE5JAMr6RdtsRuJjFqowjEA

I want it! But damn, they made the 3D for this largely mechanical looking bike in Rhino?

They also used solidworks for the mechanics, rhino only for the design part!

Nice to see a very smart and cool new product that is also super practical.

Blew the budget on engineering; had to hire brother-in-law for voice-over.
No joke, this bike looks awesome. Disc brakes and IG hub are nice touches that make it actually usable for a broad market. As long as the open/close latch is CYA stout, it’s golden. And for about $1000? Super reasonable. 10/10, bravo.

here you can buy one… https://www.indiegogo.com/projects/convercycle-bike-2in1-multi-city-bike#/backers

Cracking piece of kit! So simple but effective