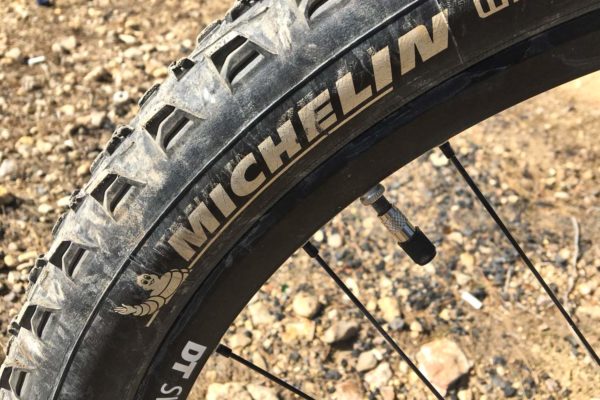 A close look at the new ConvertAir valve end highlights the flaws we’ve come to accept from Presta valves. ConvertAir seemed like a solution looking for a problem when I first spotted it. I mean, who in the right mind would rather return to Schrader valves? But upon closer inspection, it seems the ConvertAir might keep all the best elements of the smaller valve, while adding only the positive aspects of the larger Schrader.

While most performance oriented cyclists have accepted the light & efficient locking benefits of the Presta valve, it’s pretty safe to say everyone has accidentally bent or broken a valve tip. And now with tubeless, we’ve all had a Presta valve clog with sealant.

Well, the RideAir Innovations team who created the easy-to-use, portable air pressure cylinder that fits in a bottle cage (and is also sold under SKS branding, too), they seem to have a bone to pick with the Presta valve. 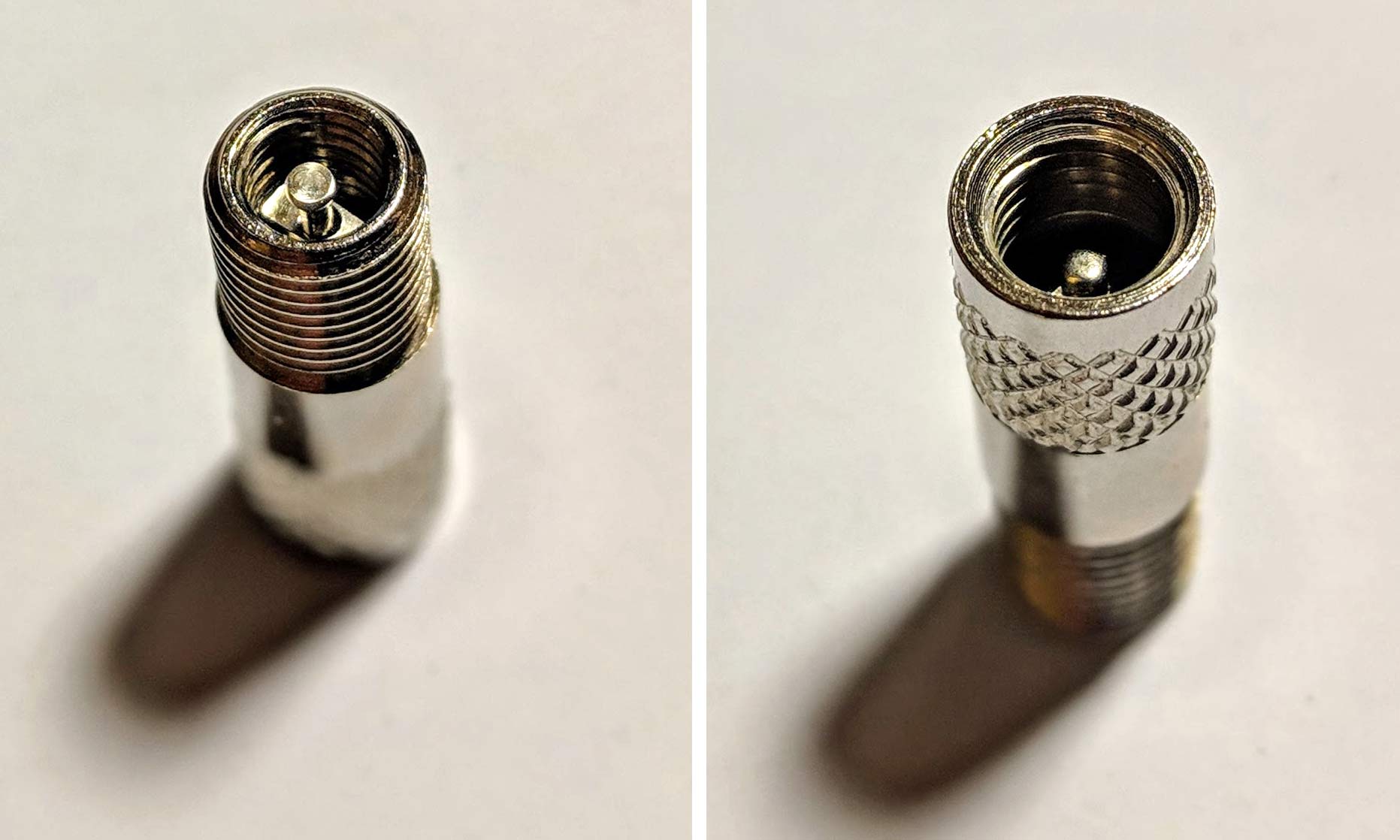 They want to make the lives of regular cyclists easier by ditching the fragile Presta core, in favor of their ConvertAir, an external Schrader extension that puts the valve core on top of the small diameter valve. This isn’t the typical brass Schrader adapter that requires you to thread it on & off (and sometimes accidentally unscrew the Presta core.) 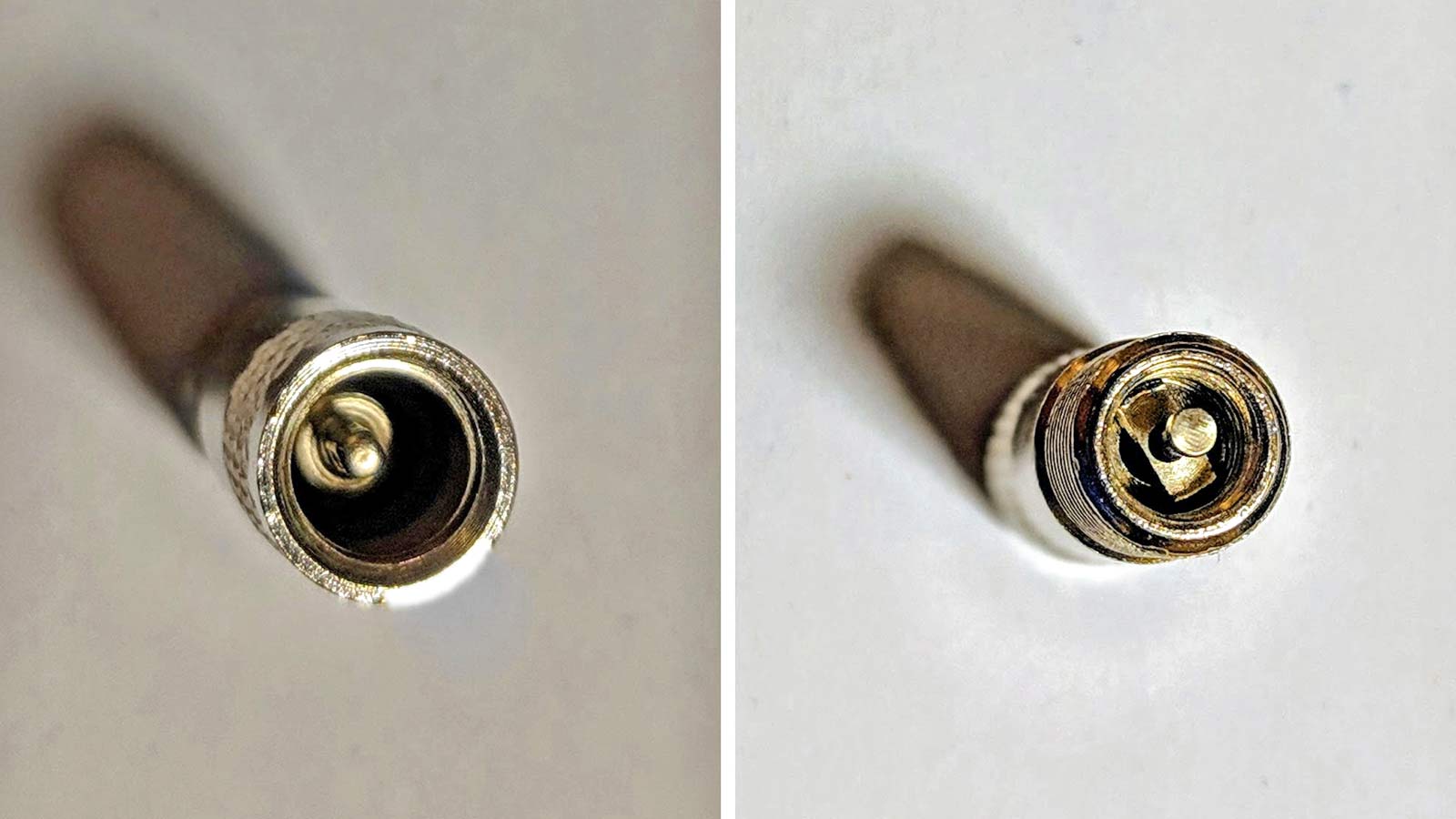 Instead the ConvertAir gives you complete press-to-fill or release air Schrader valve functionality, and tool-free removal to add sealant or seat a new tubeless tire. It essentially is just a completely functional short, conventional Schrader valve that threads on snugly overtop of your removable core Presta valve tube or tubeless valve – the body of Presta and the head of a Schrader. 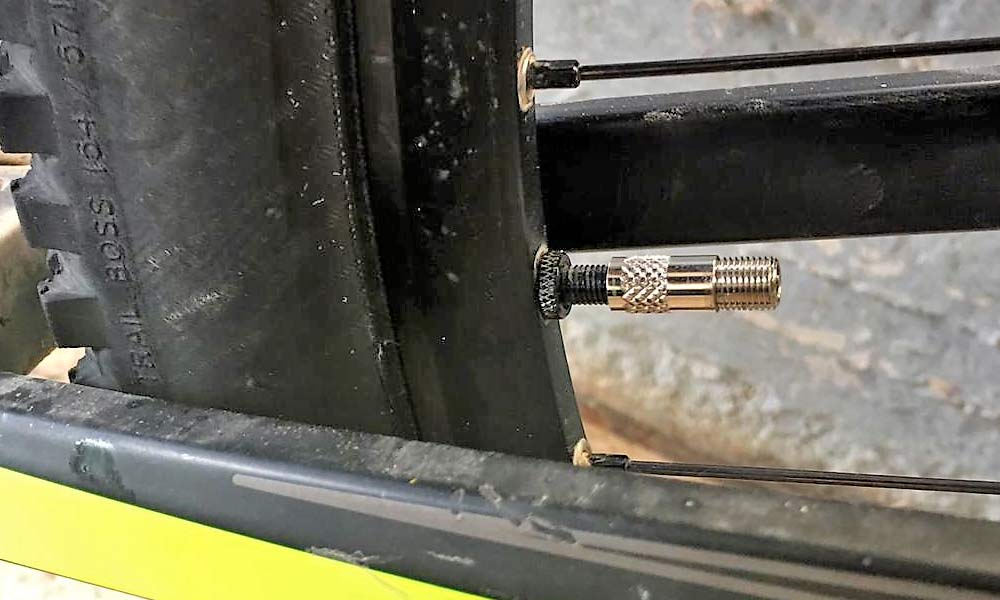 Of course you can’t use a Schrader valve tube in most applications because modern rims are drilled only for the smaller valve, and  very limited bike application tubeless Schrader valves exist. You wouldn’t really want a complete Schrader anyway, because it is even more a pain to remove its core for improved airflow or adding sealant.

But it also improves airflow, because now the valve sits on top in the wider Schrader extension body, and the narrower Presta valve is no longer obstructed by an internal valve core. And since the valve core never really goes into the same place where tubeless sealant touches, its is much less likely to be clogged by sealant. 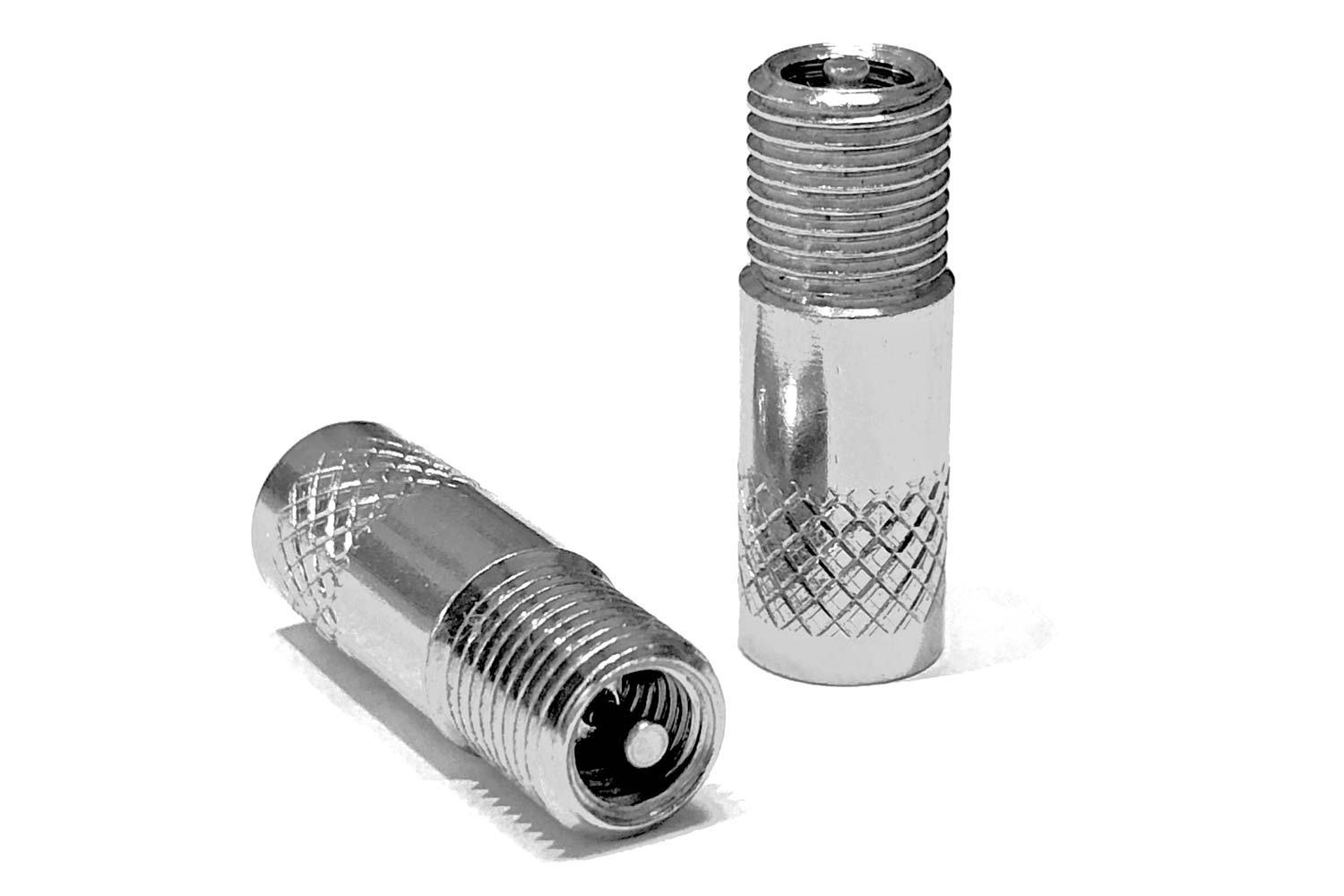 Really, I started thinking this was a silly gadget. And now, the more I think & write about this, and I see why RideAir Innovations developed (& patented) this thing. So now I want to try it out (and don’t even get me started about how it would mean I could bring back my Skull Valve Caps or my old Buzztronics Sparx light up valve caps!) 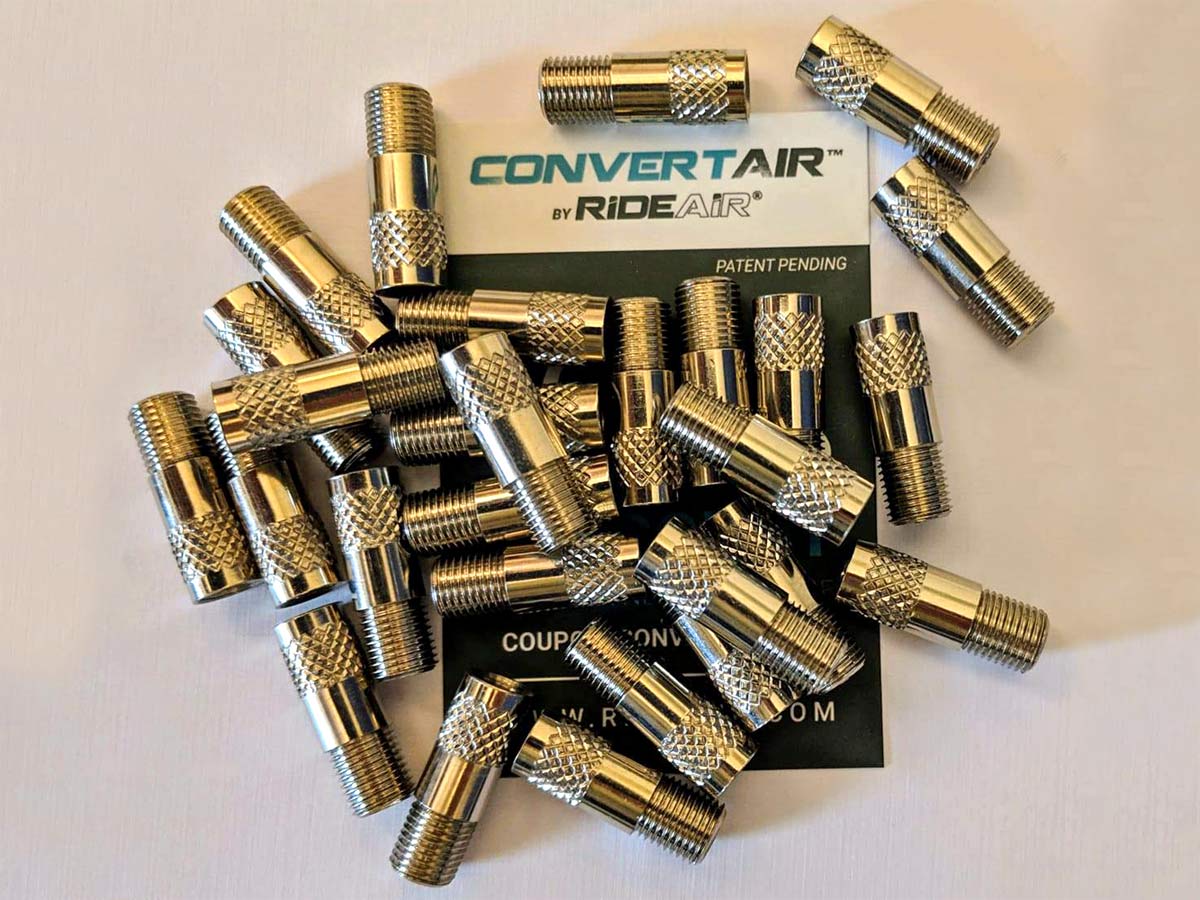 At just $12 for a pair, there’s also not much reason not to give it a test. They say each 23mm long ConvertAir weighs just 5g, and when you subtract the 1.5g from removing the Presta core, it adds a net of just 3.5g per wheel. And of course if can be moved from tube to tube with a conventional setup, or stay long-term on your tubeless valves.

There ARE a couple of Schrader tubeless valves on the market, Stan’s make (or at least made) one… But of course you wouldn’t want to make a hole in the rim bigger than necessary, so they are only really going to be used on older rims that people (like I did) want to convert to tubeless… I really hate Presta valves because they are so fragile, I’ll be getting some of these asap… Thanks Bikerumor, this is exactly why you’re one of my favorite websites!

They do exist but the problem of drilling a hole in a carbon rim may make some squeamish, or its to short.
https://www.notubes.com/valve-stem-pair-universal-schrader-32mm-10mm-base

Uh…its no more of a pain to remove a Schrader valve core than a Presta…heck my core removal tool has each type on the ends.

That said, I’d be really interested in this product if it 1) improves the air flow, when the core is pulled — making it easier to inflate a tubeless fat bike tire; and 2) it allows a pressure gauge to register the low air pressures used in fat tires. You currently need to buy a fat tire specific gauge in order to measure sub 10 psi pressures with a Presta valve whereas with a Schrader valve the same gauge works sub 5 psi. This alone would justify buying these valves since those gauges cost way more than $12 (and they are very sensitive so don’t drop them).

Why would you remove the Schrader core? The point is that you’d just twist it off like a big valve cap in case you wanted to add sealant or use an inflator.

I was referring to setups with standard Shrader valves (vs. standard Presta valves ref. his comment). I need to remove the core to put in sealant — breaking the bead on my rims is a real pita so once i get them seated I leave them seated.

If these would allow you to inflate an unseated tubeless tire with the core in (or on in this case), that would be even better since I could use my compressors standard chuck instead of the one with the Presta head (for better airflow).

You just gave me another reason for buying these — letting air out (a common thing to do when fat biking on snow). With Presta when it is really cold the sealant clogs up the valve so much that very little air will flow (I typically count to 30 to let out a couple of psi). With Schrader the air will flow but you need something to press the release (a stick, key, cable tie, etc.). If you can partially unscrew these (while wearing heavy gloves) to release air, then it would be the best of both.

@Mike, yes for both of your questions. It improves the airflow dramatically and normal gouge should be sufficient with Schrader.

Why are companies working so hard to inovate solutions to to things that are not real problems. Drill the rim and put in a real tubeless schrader valve. The article says they are not available, but that is incorrect.

This will compromise the integrity of most rims and is a super bad idea.

I’ve in been in a bike workshop for 23 years now and have drilled a lot of rims to fit a schrader in a fench/dutch valve hole…. works like a charm and never had any issues with it…

so could you supply us (the reader) with clear and simple proof of this beeing a bad idea?

Had this discussion with the local manufacturer of my $1600 Carbon Fiber wheels (Woven). I wanted Schrader like the alloy rims they were replacing, they made theirs only Presta. They thought drilling them out was a bad idea and wouldn’t do it for me. Said if I drilled them and the rim cracked it was my problem. I stuck with Presta.

First, you loose your warranty on the rim. Second, cost for customers to drill the rim is about 10-30 EUR. Add this to the Stan’s 16$/EUR and you get an expensive and messy solution while for a 12$ you get the same result with this product.

So the difference between an 18h, 24h, 28 h and 32h rim is the number of holes they drill in the rim after manufacture …

The only rim I would not drill for shraeder would be a Deep-V. Any downhill rim and most road rims are wide enough to stand losing the 1/16″ of material enlarging the hole will take away. Many rims are available either/or so that really disproves your statement, which was probably told to you by someone trying to upsell you to new wheels rather than drill out the valve stem hole, or they weren’t competent enough with a drill to guarantee a good result.

Yet another solution in search of a problem.

First of all, this system gives you exactly as much airflow as a presta valve with its core removed. Just take your Presta valve, remove the core, and inflate until the tire pops into the sidewall of the rim. So no real innovation here.

Secondly, clogging the valve will happen anyway in some cases. It’s not a tiny bit better than adding sealant through a core-less Presta valve with a simple syringe – clean, easy and fast. What happens after that, when the tire rolls, is out of our control anyway.

Thirdly, I don’t really know how stupid or careless one must be to damage a Presta valve core. But even if you do, a replacement core costs less than a dollar, so you can be pretty reckless with your wheels and still be better off financially.

Jeez, people do like to make their own lives complicated. But hey, to each according to his needs!

What’s really impressive is that 8 paragraphs were devoted to these $12 lumps of valve-y unnecessary-ness.
Is that the right english-ness???

Yeah, throw away the Presta valves and just put in Schrader valve stems. Buy the cheapest Continental tube available, having a metal [usually brass or plated brass] Schrader valve stem that’s threaded full length. Then cut around the base of the valve, leaving enough rubber around the base of the stem to seal against the rim. Yeah, you have to enlarge the hole thru the rim, think I drill to 8.5 mm [?], but the hole isn’t large enough to cause an issue. I’ve done this on almost a dozen wheels since going tubeless many years ago. I’m a weight-weenie and can live with the additional 1 gram penalty, since I can fill my tires with the compressor in my garage or at any gas station. Easy to remove the valve core and add sealant. No more plugged valves! More air flow to seat those tubeless tires too. I’ve also used aluminum Schrader valve stems for [auto] racing wheels.

But that gram could have made all the difference

Here’s a high-end lightweight alternative that beats presta in every way:

Mavic gives to their TL valves this converter for “free”

That is exactly what I was thinking. For years Mavic has shipped that adapter (front and rear) with their wheel/tire sets (they also come with installed tubes you remove) and the valve stems and sealant. Not so sure what is new about this product at all.

Mr Stubby, a similar product, has been available for years.