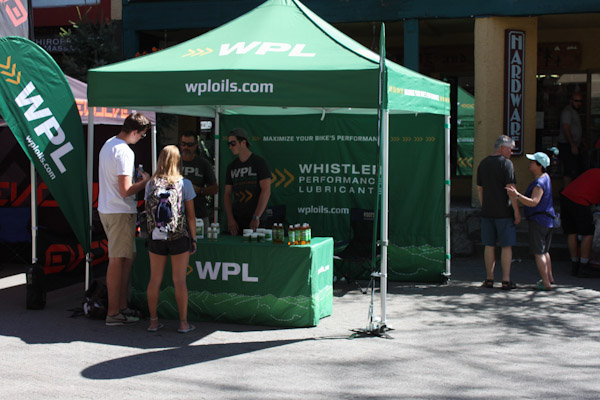 We all know modern bikes are sophisticated machines, but it’s easy to forget how much expertise goes into developing small stuff like lubricants and degreasers. Whistler Performance Lubricants is one company that comes to the table with some serious knowledge of their craft. WPL’s Scientific Advisor Alejandro Marangoni is a world-renowned chemist who specializes in the structure and functionality of triglyceride oils, and he’s combined his expertise with his passion for riding by creating high-performance lubricants for mountain bikes. Marangoni’s son Isaac is WPL’s General Manager, and tests their products while racing the B.C. Downhill series.

We first checked out WPL’s products during Crankworx last year, and caught up with them again to see what was new for 2016. WPL has now developed their own grease and bio-degreaser, plus they’re offering two new weights of their Shock Boost oil. All of WPL’s products are also eco-friendly and completely safe to the touch, so you can be green while you race for the gold… 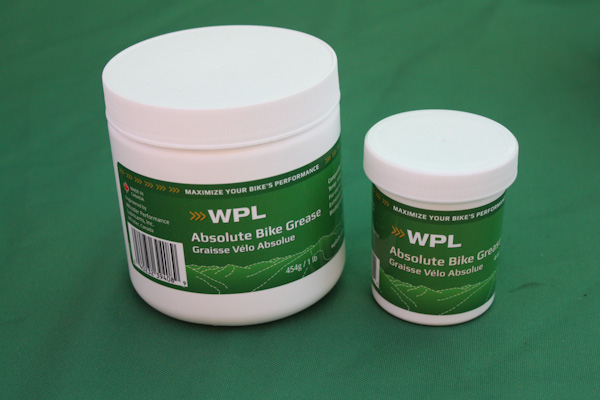 WPL’s new all-purpose Absolute Bike Grease is extremely waterproof, safe for suspension seals and internals, and provides a huge operating temperature range from -40c to 120c. Apparently some highly dedicated riders from Quebec were requesting a grease that could perform in such frigid conditions, so WPL made it happen.

Isaac says he believes they’ve developed the world’s first biodegradable grease. The product does not put off a chemical smell, doesn’t feel like petroleum, and won’t stain your clothing or fingers. He also mentioned all the feedback they’ve received from riders has been very positive. The white-colored Absolute Bike Grease is currently available in two sizes- A 16oz tub sells for roughly $30 USD and a 4oz jar goes for $2o. 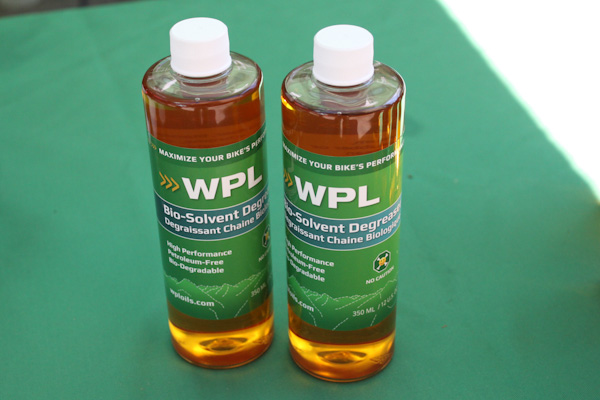 When it’s time to start fresh with a complete clean and re-lube, WPL’s Bio-Solvent degreaser is designed to aggressively attack built-up grease on your most crucial moving parts. As the name suggests the product is a solvent based degreaser that is derived from plant-based oils, so it’s biodegradable and completely safe to people and the environment.

Alejandro says you’ll only require a small amount of product to remove dirty grease and grime from derailleur pulleys, between chain links and any other tight spaces, so if used sparingly a bottle should last for quite a while. A 350ml container of Bio-Solvent Degreaser sells for $14. 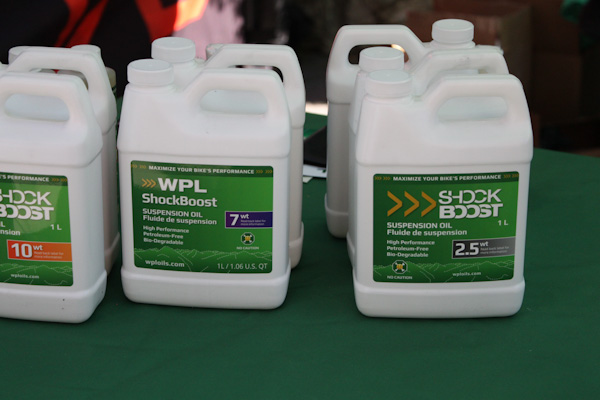 Last year we checked out WPL’s Shock Boost suspension oils, and for 2016 they’ve added to the lineup with new 7wt and 5wt oils (the 5wt is ready to go, but not pictured as the company is waiting on labels!) WPL was also happy to report that they’ve achieved a higher viscosity rating on their 2.5wt. oil, bringing it from a Viscosity Index of 150 way up to 320. The Shock Boost sells in 1L jugs for $27 or 250ml bottles for $12.