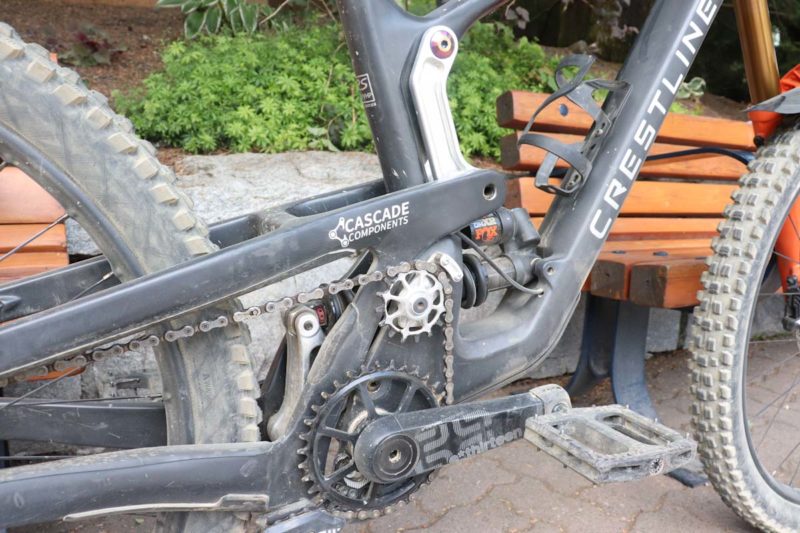 It was nice to see big crowds and lots of expo booths back in Whistler at Crankworx 2022, and this article rounds up some of the more interesting items on display. Cascade Components had several recently updated bits at their booth, not to mention a prototype from Crestline Bikes that they’ve collaborated with the brand in developing. I also got a hands-on look at Lezyne’s latest portable pump, and got the scoop on Maxxis’ new bike park specific tires. 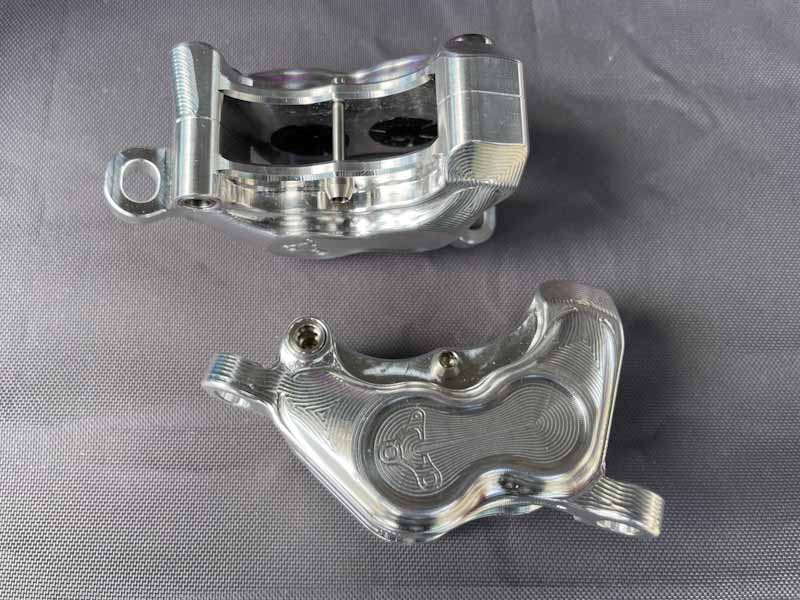 Above we see the most recent iteration of Cascade Components’ North Fork aftermarket SRAM Code brake calipers. These calipers have been available for a while, but the silver ones pictured here boast a recently updated design. A close look reveals the new caliper leaves more material around the outside of the pistons, along with some slight re-shaping.  The calipers are machined from 6061 T-6 aluminum.

Cascade claims their calipers’ 16mm and 18mm pistons increase braking force by 20% over the stock versions. They also say they manage heat better and reduce brake fade on long descents. These calipers use SRAM’s Code brake pads (or compatible) and can be serviced with their Bleeding Edge bleed kit. 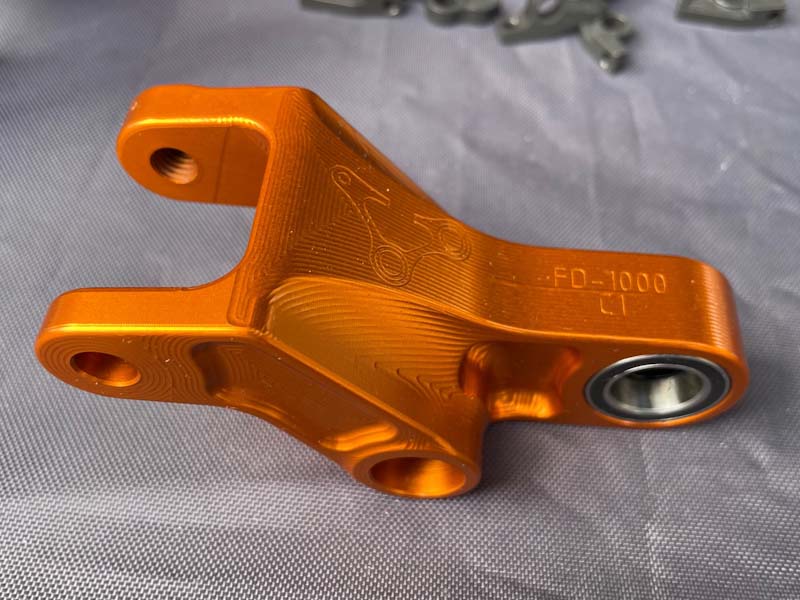 This is one of Cascade’s updated replacement links for the Forbidden Druid or Dreadnought. These links preserve the bike’s original kinematics, but this new version was re-shaped to allow more clearance for various shocks. The updated link can accept heavier coil springs (over 500lbs) where the previous model did not. On the Dreadnought this link increases travel from 154mm to 165mm. 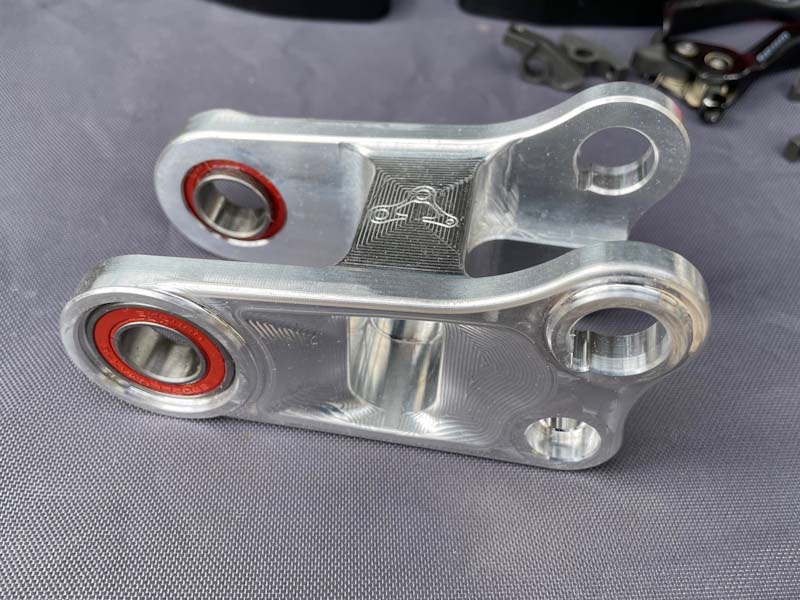 This is a prototype link that’s still in development, but it’s destined for the Yeti SB165. The link is designed to boost the bike’s travel from 165mm to 170mm, and provide a more progressive suspension curve. 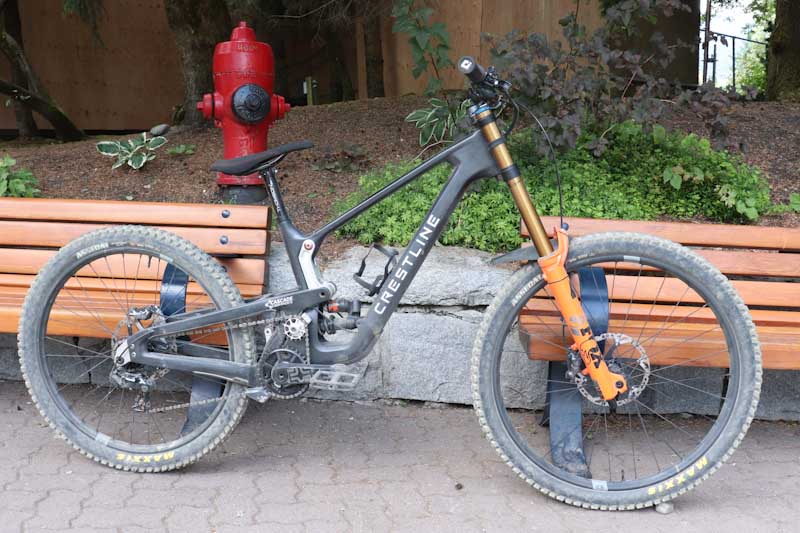 Also at the Cascade booth were two incoming bikes from Crestline – the highly adjustable long-travel RS 205 VHP MTB and an eMTB. One unique thing about the long-travel bike is that it is being developed in collaboration with the folks at Cascade Components, who are assisting with suspension tuning by designing the links for the frame. Since this bike is officially still under embargo I can’t divulge all the details yet, but I was permitted to share some photos and basic info.

The RS 205 VHP (which stands for Rally Sport, 205mm travel, Virtual High Pivot) was designed as a downhill racing or bike park bike, but it can be set up as an enduro bike too. Using aftermarket Cascade Components links, the bike can be reduced (to various points) down to a minimum of 175mm travel. They didn’t put an ‘M’ in the model name, but to be clear the bike actually employs a virtual mid-high pivot design. 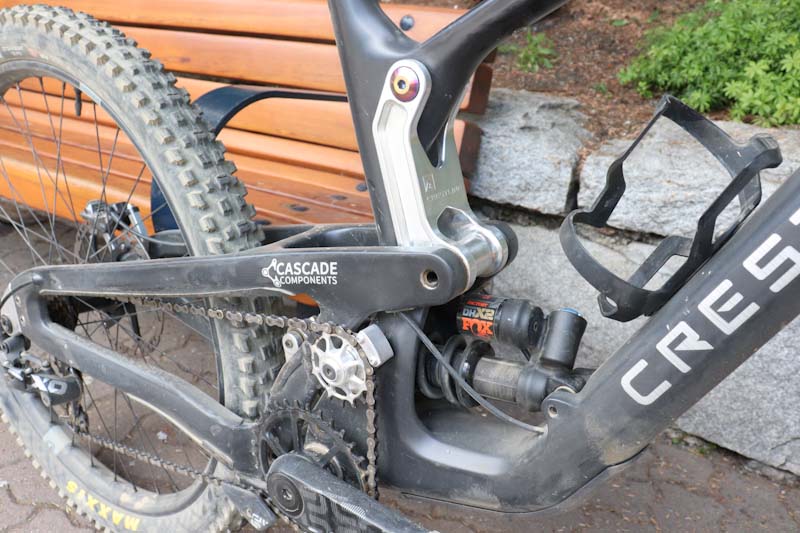 The frame is full carbon front and rear, and the links are CNC’d aluminum. These highly tunable bikes can run dual or single crown forks, will come with dropout options for 29er or MX wheel setups, and the bike has a 56mm head tube so reach or angle adjust headsets are compatible. Should you decide to set this bike up as an enduro, the idler pulley can be moved to a position that won’t interfere with pedalling.

The RS 205 VHP is a very limited offering, with only 50 numbered frames planned for production (and no complete models). Crestline is aiming to release the RS 205 VHP by the end of September. Pricing has not yet been determined. 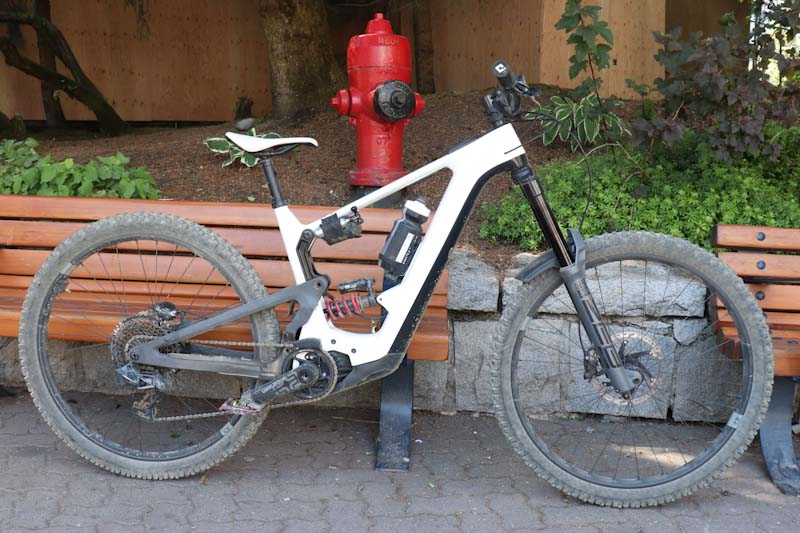 Crestline also had this eMTB on display, which is still in development so I can’t tell you much about it! It uses a Bosch drive system, and is designed so the rider can choose a large battery (720Wh if my memory is correct), or run a smaller battery if desired. I’m hoping to hear more about both of these bikes in the future, so watch Bikerumor for further coverage. 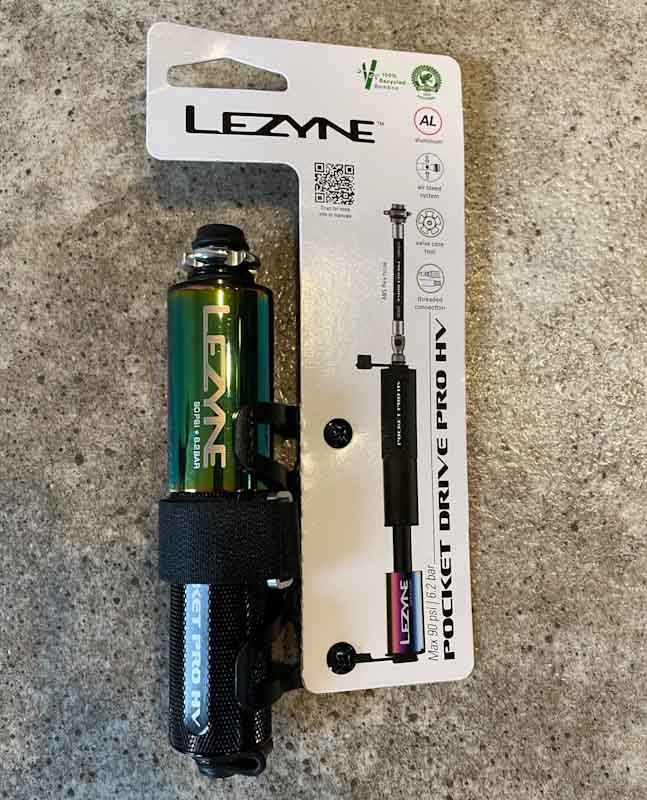 At their expo booth, I saw Lezyne’s new Pocket Drive Pro HV pump; an upgraded model of the Pocket Drive HV. It is constructed from CNC machined aluminum, and is entirely re-buildable so it can last the long haul. The Pro model gets a valve core removal tool on one end of the hose, and an iridescent colored handle. It also comes with a composite bottle cage mount.

This compact pump accepts Schrader or Presta valves. It also has a bleed valve, which releases the hose pressure in Presta mode or removes air from the tire in Schrader mode. This tiny pump measures 144mm long, and is rated up to 90psi. 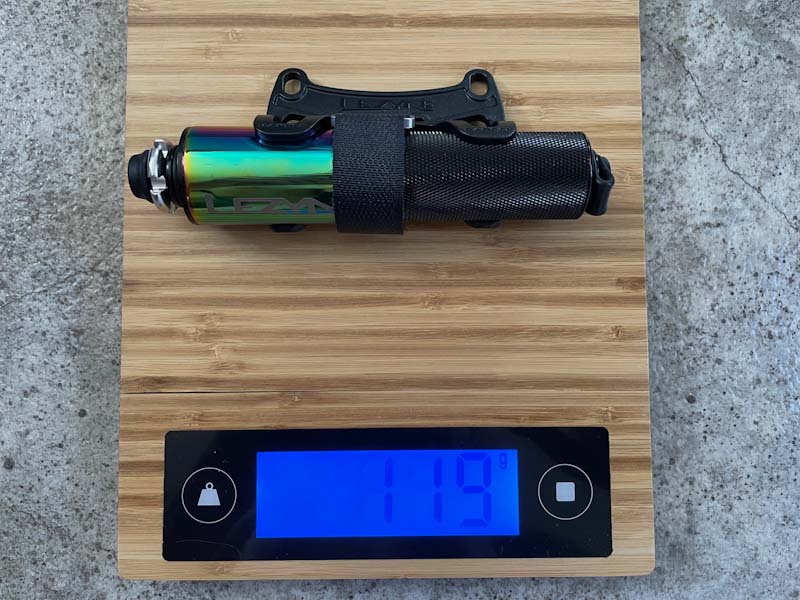 Adding this pump to your bike will only cost you 119g, a price well worth paying to save you an unexpected hike-a-bike! 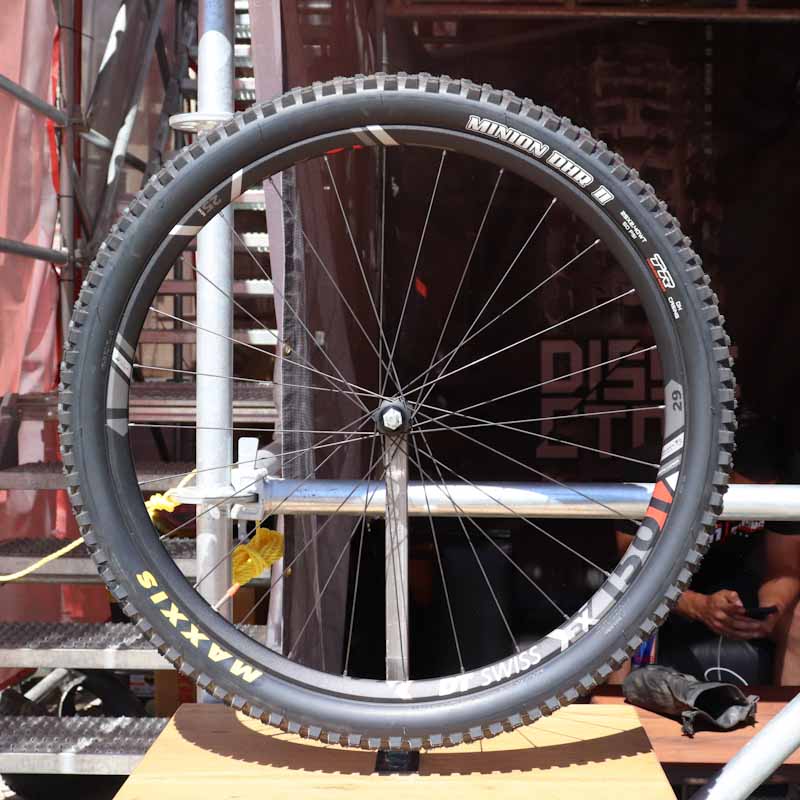 Bike park riding takes its toll on your bike and components, so Maxxis has come to the table with a price conscious line of park specific MTB tires. What makes a tire bike park specific? Well Maxxis starts with a more durable compound, so they won’t wear out quickly as you rack up vertical on the chairlift. These tires also use a wire bead instead of a folding bead, keeping the price within check.

Maxxis is producing park versions of their Minion DHF, Minion DHR II and Assegai tires. The Minion DHR II will be available soon in a 29×2.4” only, and 29” DHF and Assegai models are coming later in 2.4” and 2.5” widths.

Those calipers are gorgeous, little jewels.

Wait, the new Maxxis tires are tubeless AND wire-bead? I am curious to see how that’s gonna even work.