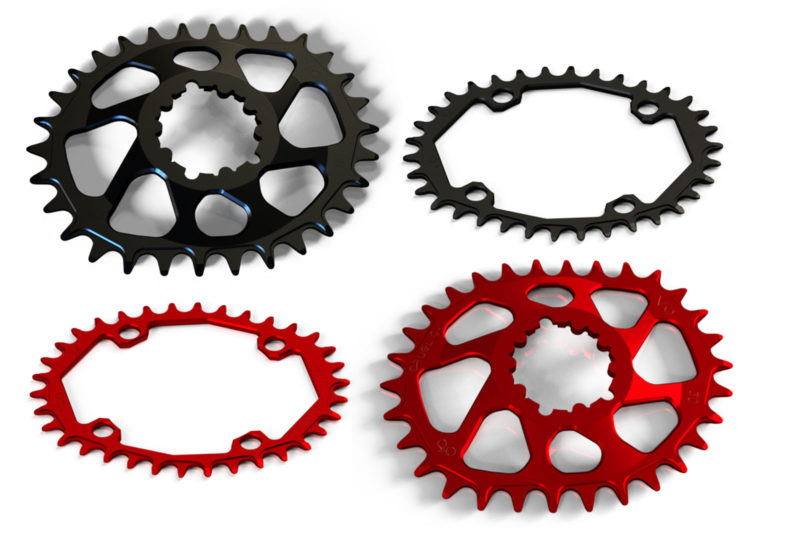 Cruel Components are manufacturing one of the most extreme oval chainrings on the market. This small Italian manufacturer of bike components has gone beyond the regular 10% to 12% ovality we see from most brands, introducing a double cam design in both Direct Mount and 4-bolt BCD styles.

Cruel Components’ Vo Series chainrings are available in 30T, 32T and 34T, though the 30T is not compatible with 50T cassette sprockets or greater; Direct Mount options are available in 0mm, 3mm and 6mm offsets accommodating a variety of chainlines for Truvativ, Race Face and Hollowgram SI cranksets.

What’s up with the double cam design? Well, Cruel Components say the characteristic variable geometry shape of the chainring allows for faster passing of dead centers; that spot at the top of pedal stroke when power transmission is at its lowest.

They claim the profile delivers a more efficient and powerful pedal stroke, also leading to improved traction. Their own laboratory tests on this double cam design showed that, compared to a traditional round chainring, the Vo Series Chainrings deliver an average 10% power increase, and a 12% decrease in lactic acid accumulation.

Cruel Components machine their round (VoR series) and double cam (Vo Series) chainrings from 7075-T6 aluminum. They all have a narrow-wide profile optimised for chain retention, and are compatible with 9-speed, 10-speed, 11-speed and 12-speed chains. A 32T Direct Mount 3mm offset chainring for SRAM Boost (52mm chainline) weighs a claimed 66g.

The Cruel Components Vo Series double cam chainrings, designed and manufactured in Italy, start at €82 for the 4-bolt BCD options, increasing to €87 for the Direct Mount chainrings. Their regular VoR Series rings (the round ones), are a little cheaper, with prices starting at €65.

Wait, Is this Biopace?

This response has not aged well.

nice osymetric copycat at a better price. I guess osymetric is so old know we can only be happy we can find alternatives. Way better than any qring imho.

Biopace was oriented 90 degrees out of phase compared with most modern oval chainrings.

I’ve ridden the Absolute Black ovals and like how they feel for low-rpm climbing, especially standing, but can’t quantify any performance difference.

10% increase in power by just changing your chain ring, I don’t think so, that would be a 30watt increase in my FTP which would make it better than its ever been !