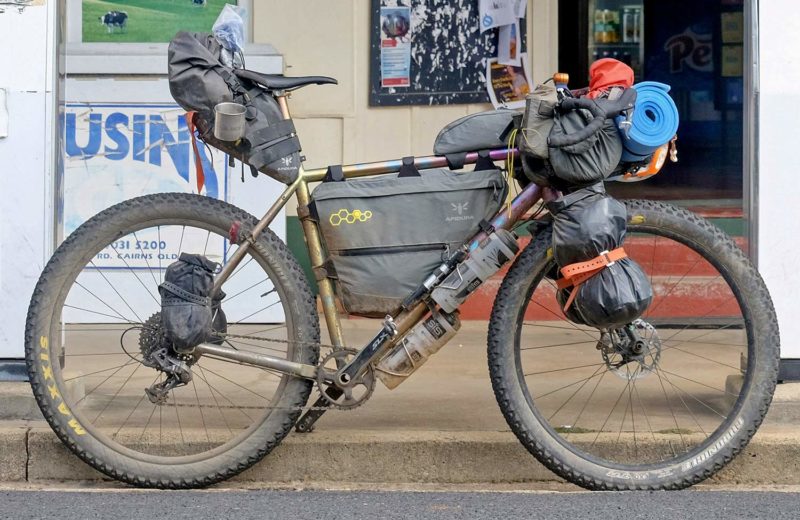 The new Curve GMX+ is a monster of an adventure bike, a titanium frame & full carbon fork developed to haul ten 1L bottles of water and fit the biggest plus sized tires. This is a bike that laughs at the thought of being limited to smooth gravel roads, hardpack trails, or even existing tracks. Curve says is sets “a new standard for off-road bikepacking”. 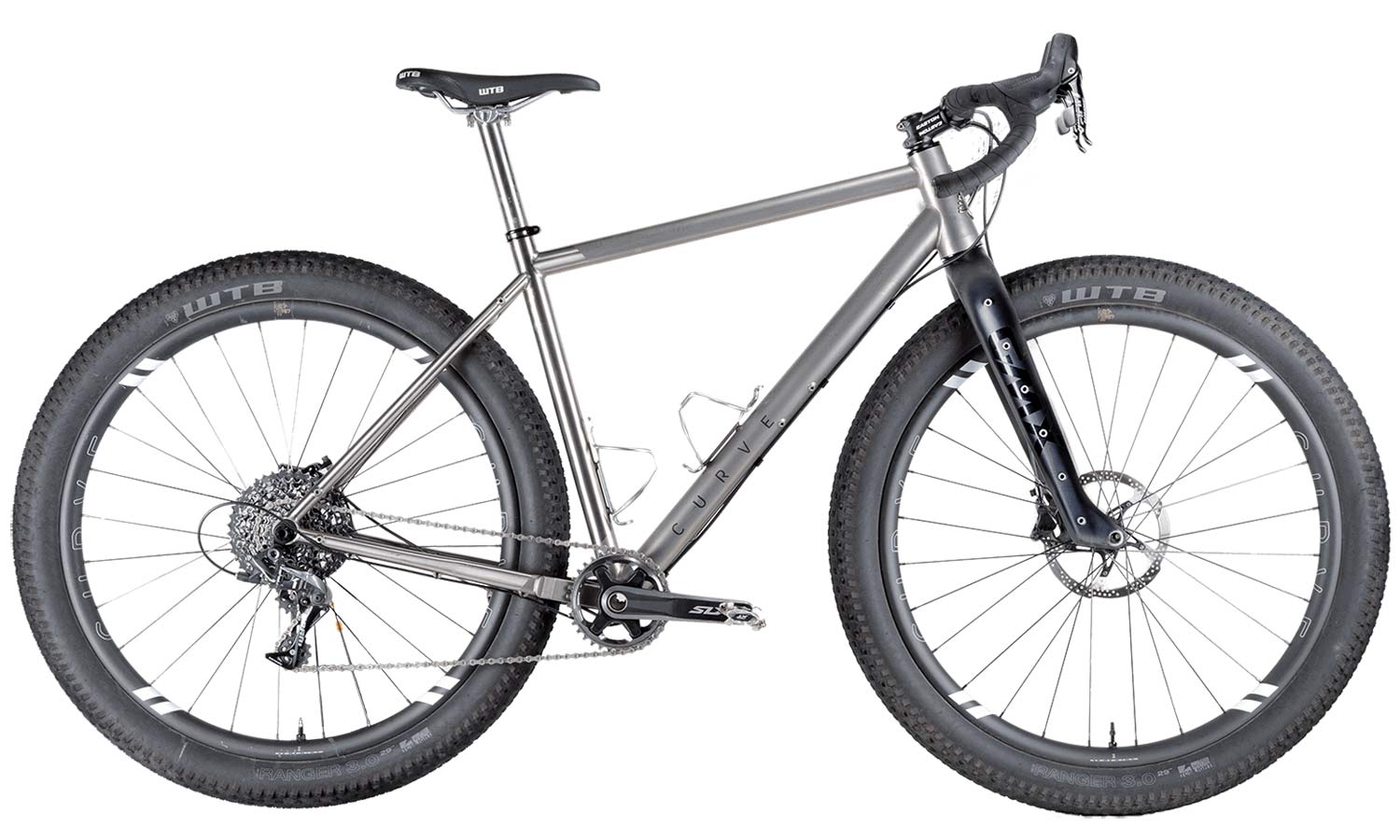 The team down under at Curve Cycling have a different way of looking at adventure riding & bikepacking (like the 75cm wide drop bar that just showed up in our office to test!) When they set out to build a new adventure bike, not only are they blurring the lines between gravel & mountain bikes, but looking to create a platform for the most epic backcountry bikepacking rides possible. 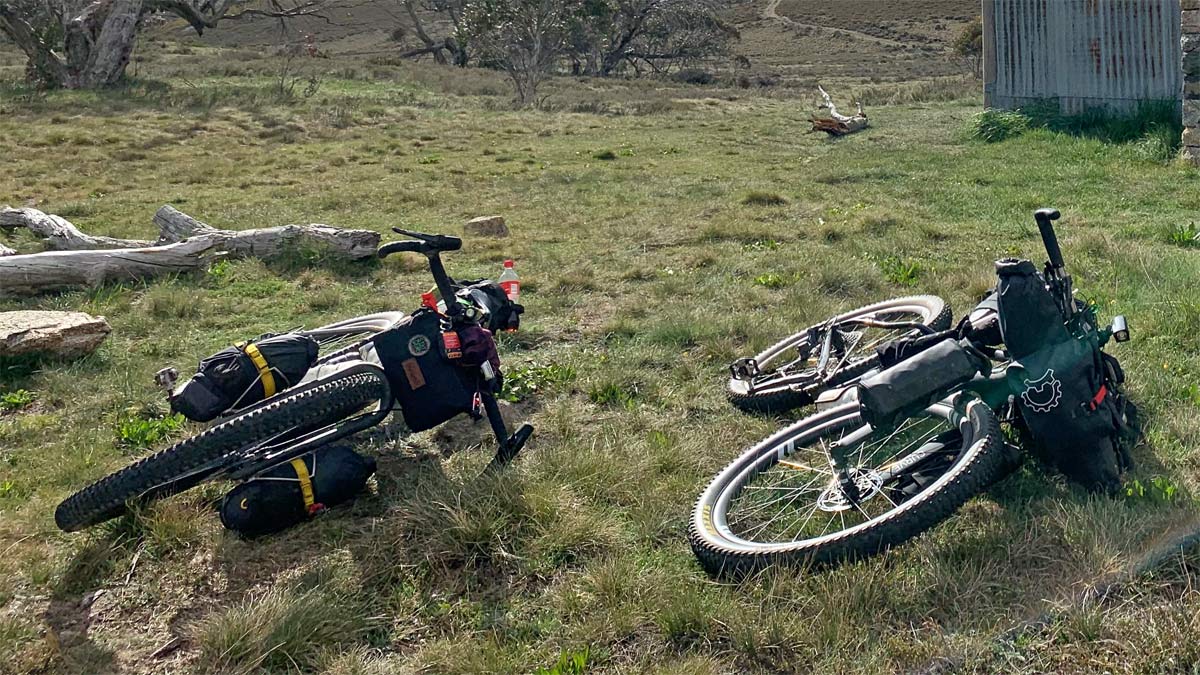 Their latest GMX+ takes the original Gravel Monster Cross overland platform and packs it up more for even bigger adventures, while shrinking the top tube down dramatically to build bikes that fit a wider range of cyclists and help get your packed bike weight lower for improved handling. Curve’s own Jesse & Sarah have spent the last year riding the GMX+ all over the Australian outback, with Jesse having won the 2019 Race to the Rock on the bike in a mind-blowing ten days for the 3000km track. 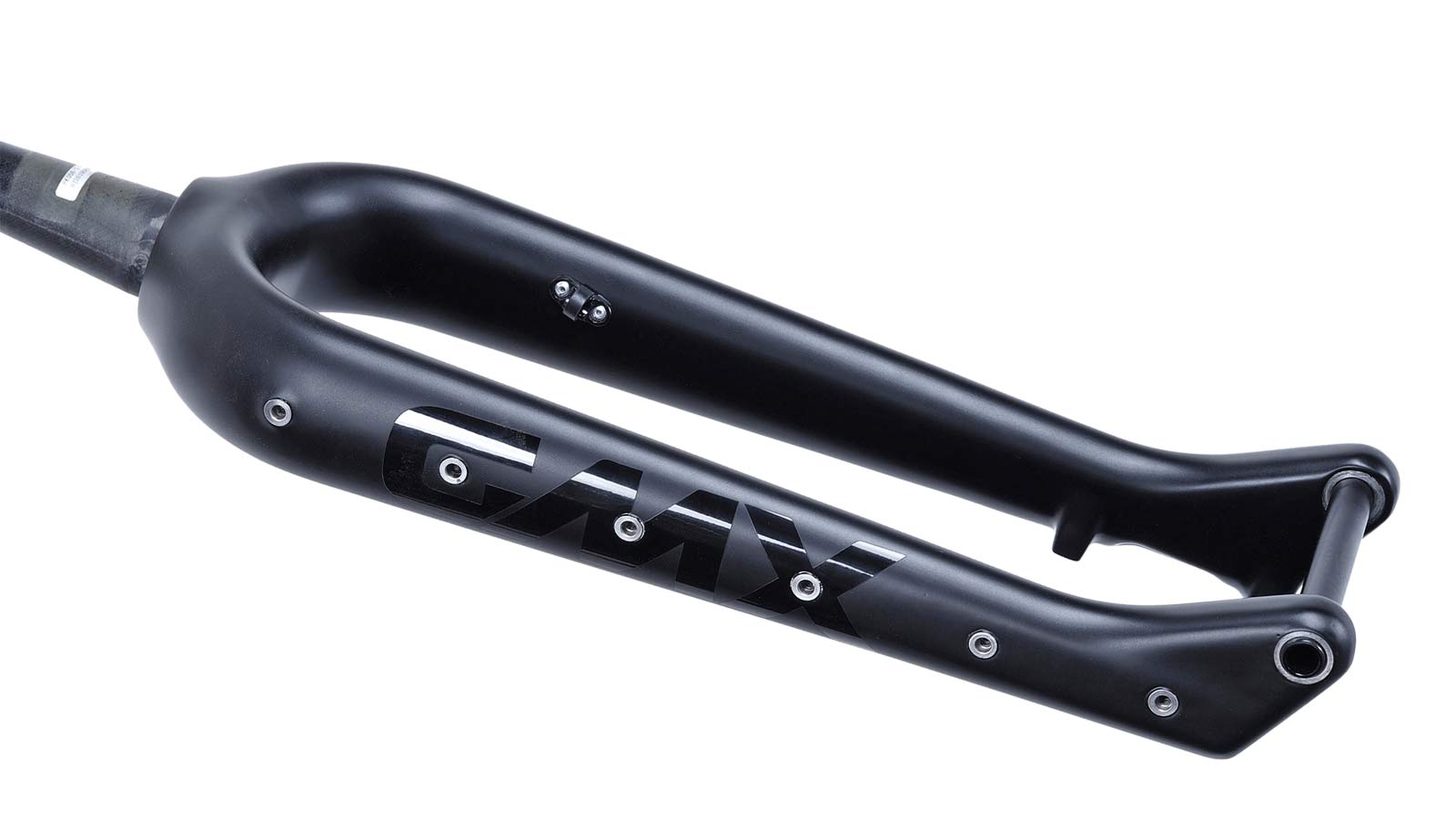 The biggest driver of the new bike is actually the all-new GMX+ Fork that still keeps 29 x 3″ tire clearance, but chops down the axle-to-crown to just 430mm to keep the front end much lower than most adventure bikes with suspension corrected forks (with 55mm offset). That essentially allowed Curve to lower stack height by a centimeter (and standover by 2cm) on what was the smallest size of the GMX, then add two additional smaller XXS & XS frame sizes too. 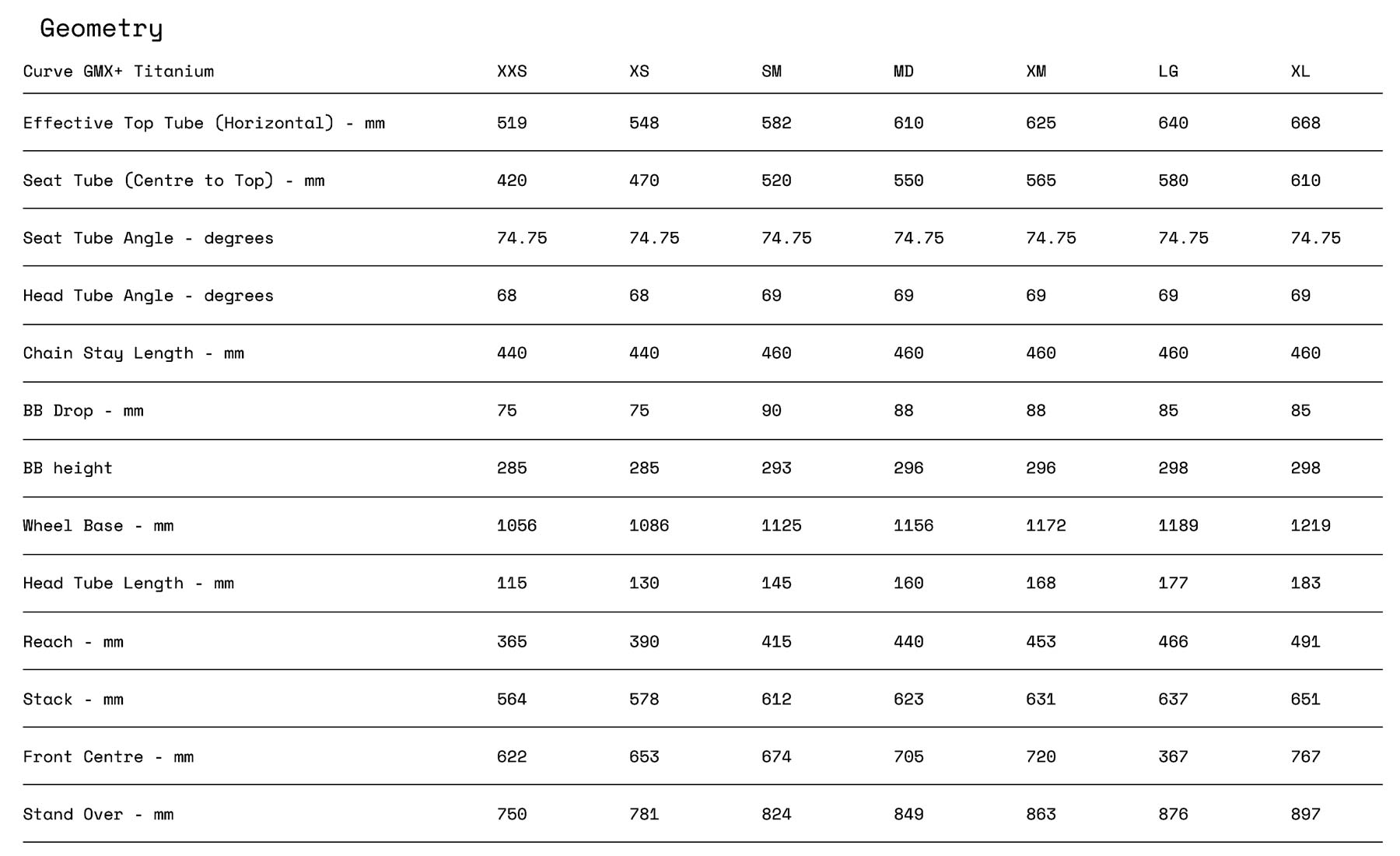 The result is that the GMX+ now comes in a wide seven size range (XXS-XL) with the two smallest bikes rolling on 27.5″ wheels (still with 3.0″ tire clearance.) Geometry itself for the new bike is a complete overhaul as well. Much slacker than before for improved loaded handling off-road, the new GMX+ head angle relaxes four degrees to 69°, while the seat angle steepens almost as much to 74.75°. 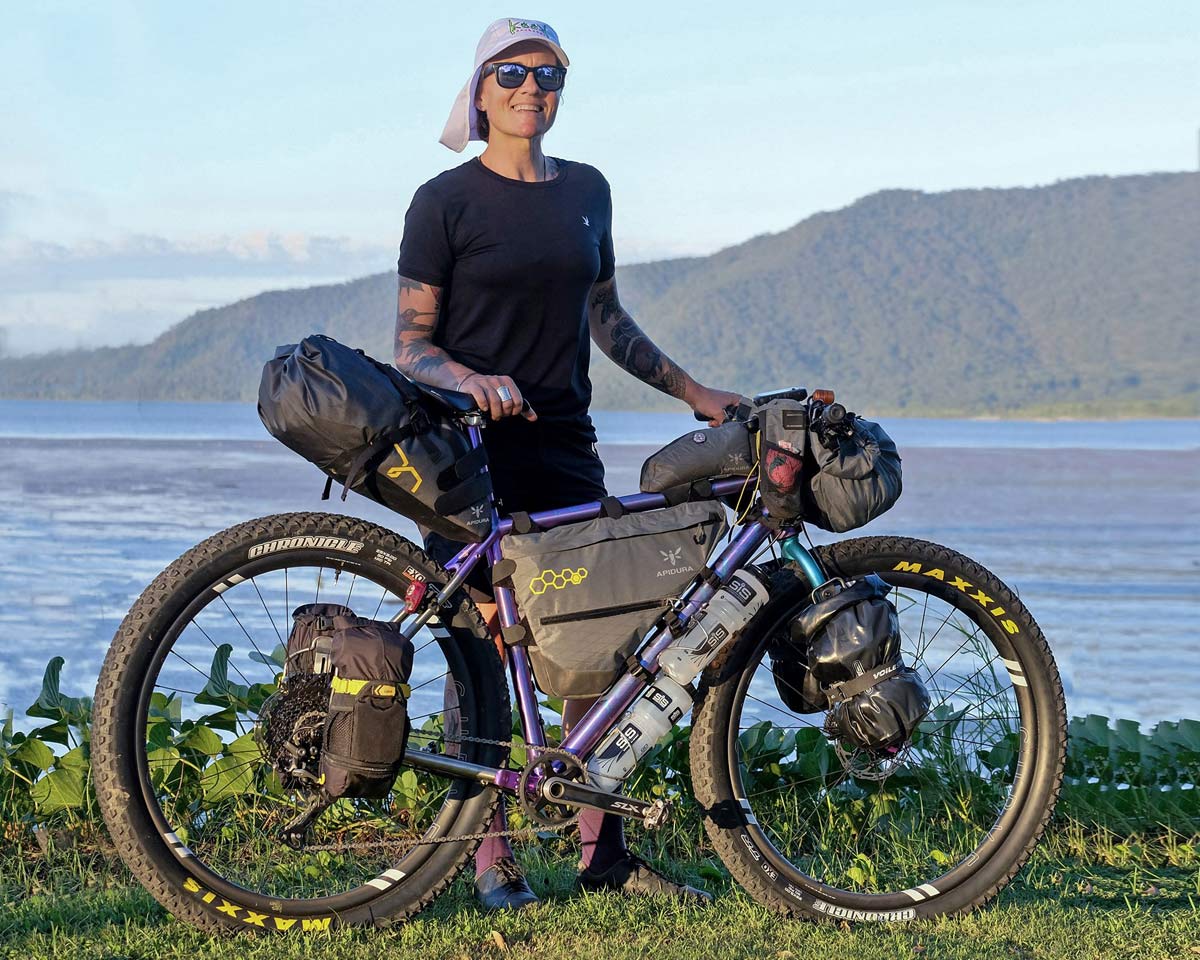 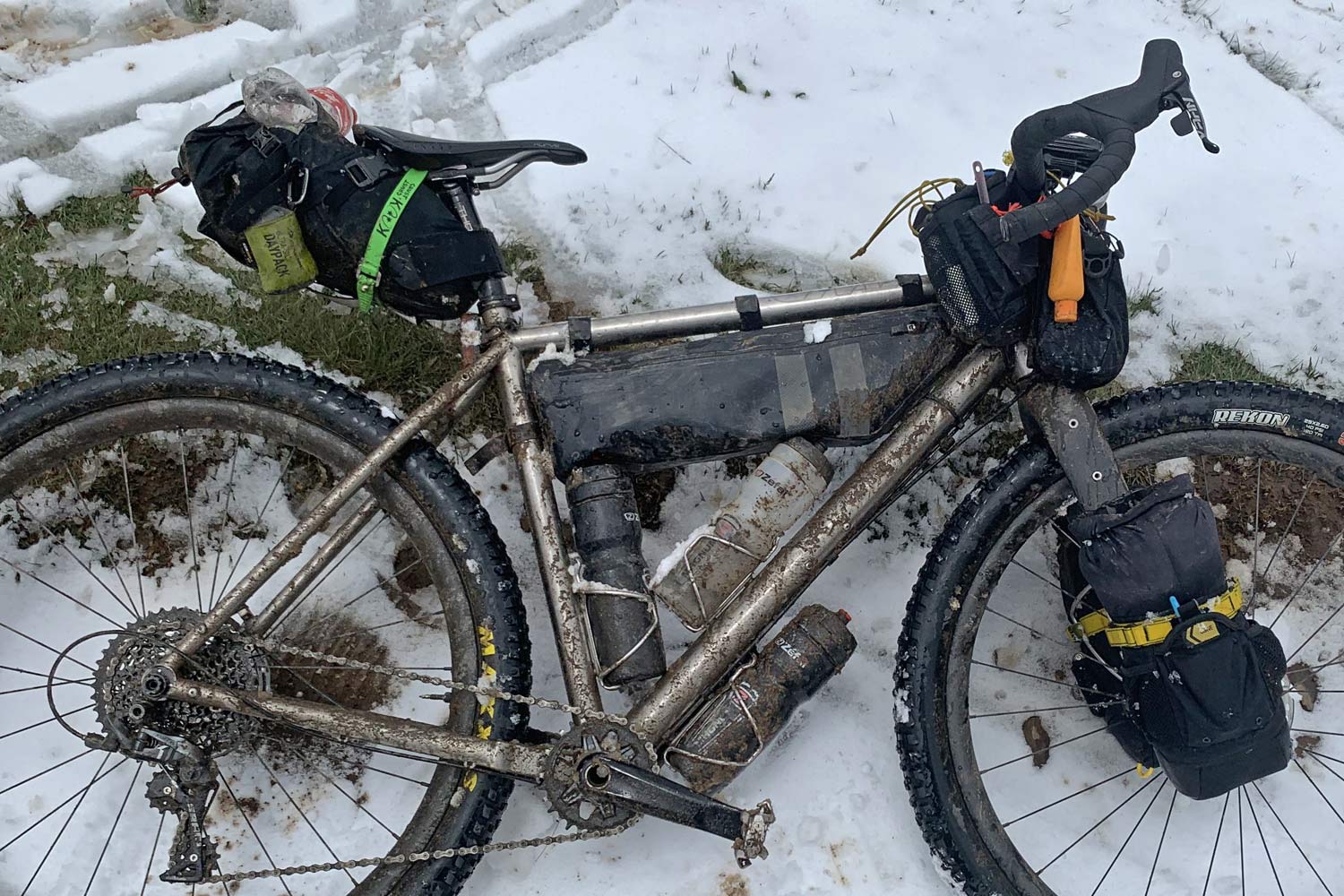 The redesign of the 3/2.5 titanium GMX+ was mostly about extending the bikes reach and allow riders to pack even more gear (and especially more water) on the bike.

Lowering the fork crown means lowering the downtube, so there is more room inside the main triangle to fit larger full frame bags even in the smaller frames, plus offset bottle cage mounts on the lower outside of the downtube so you can fit a couple of bottles even with a full bag. Plus of course, the frame has bosses for two regular cages inside the main triangle and the third under the bottom bracket. There are even a unique set of cage mounts that bridge from the chainstay to seatstay just in front of the rear axle on either side (like mini panniers), bringing the number of cage mounts for the frame up to seven! No top tube mount though, since they expect you will strap on a bag, just like you will inside the frame, under the saddle, and onto the bars. 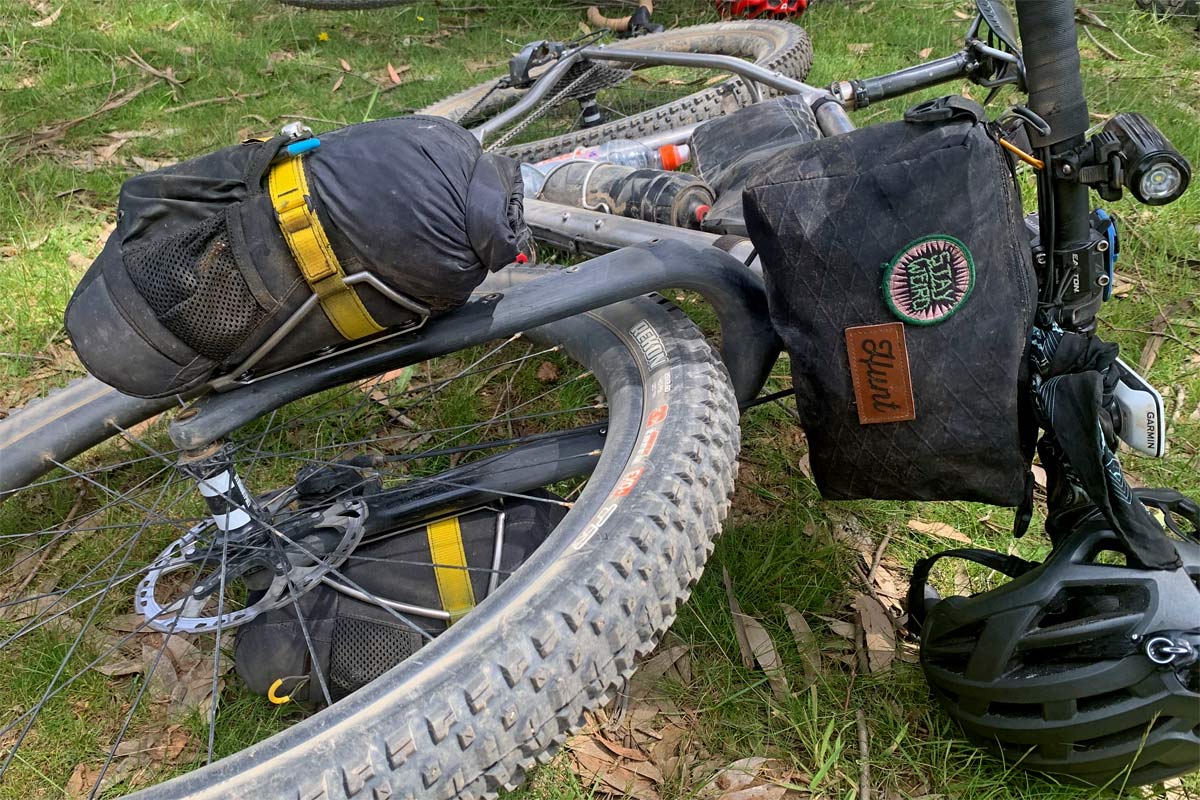 The new fork also gets 6 bolt-on points for each leg so you can mount several bottle or anything cages to each fork leg, or a wide assortment of gear bags. Curve says that adds up to mounts for ten one liter bottles, meaning your mouth should never get dry.

The ti bike is Boost spaced so you can build it up with modern mountain bike wheels, which means 12x148mm rear & 15x110mm front thru-axles. Cable routing is all external with modular mounting under the downtube, and the bike gets a T47 threaded bottom bracket. 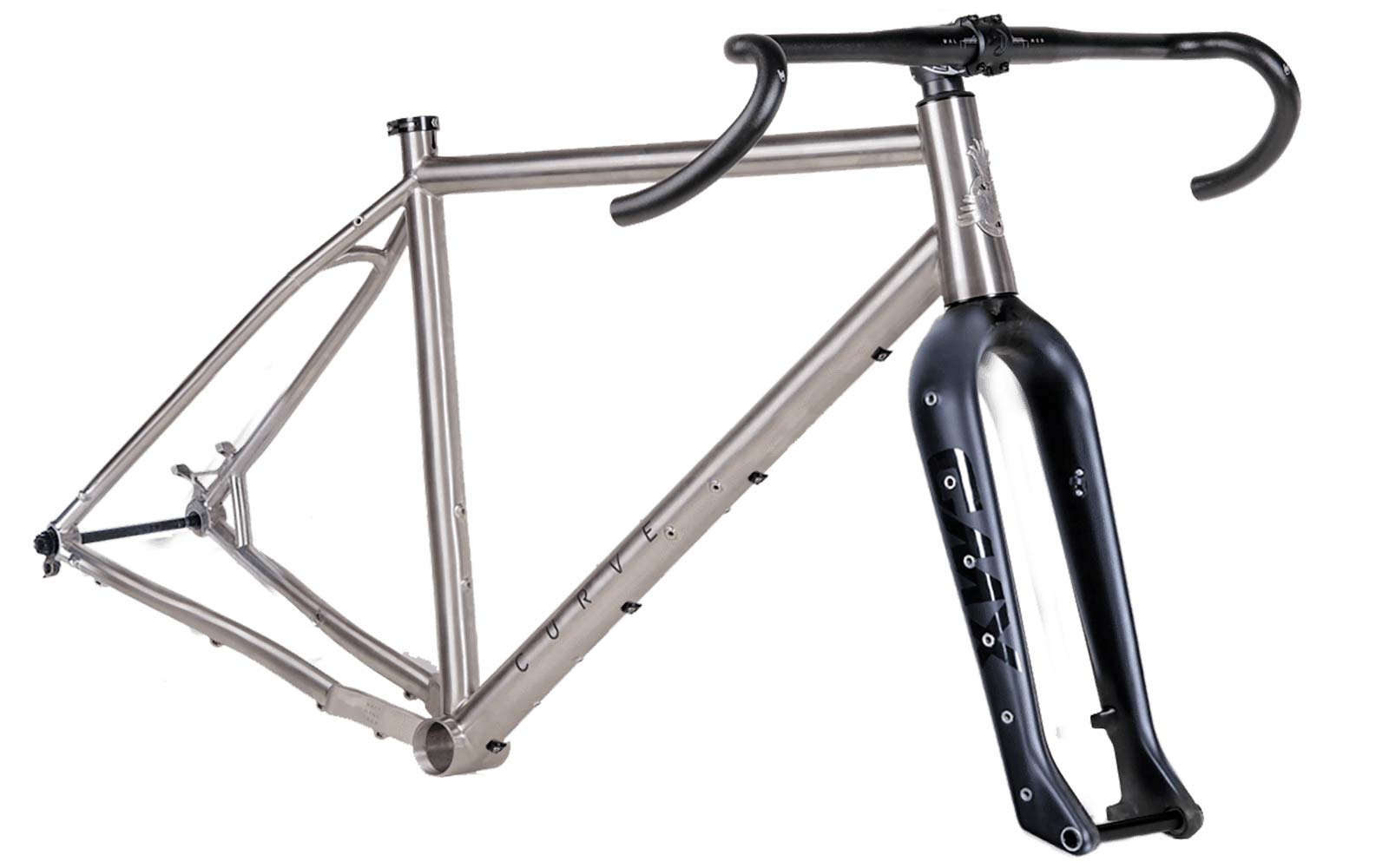 The Curve GMX+ is available now is a low volume, limited edition pre-order of just 10 for the first batch expected to land in mid-April. Then, a second slightly larger batch that will arrive in May. 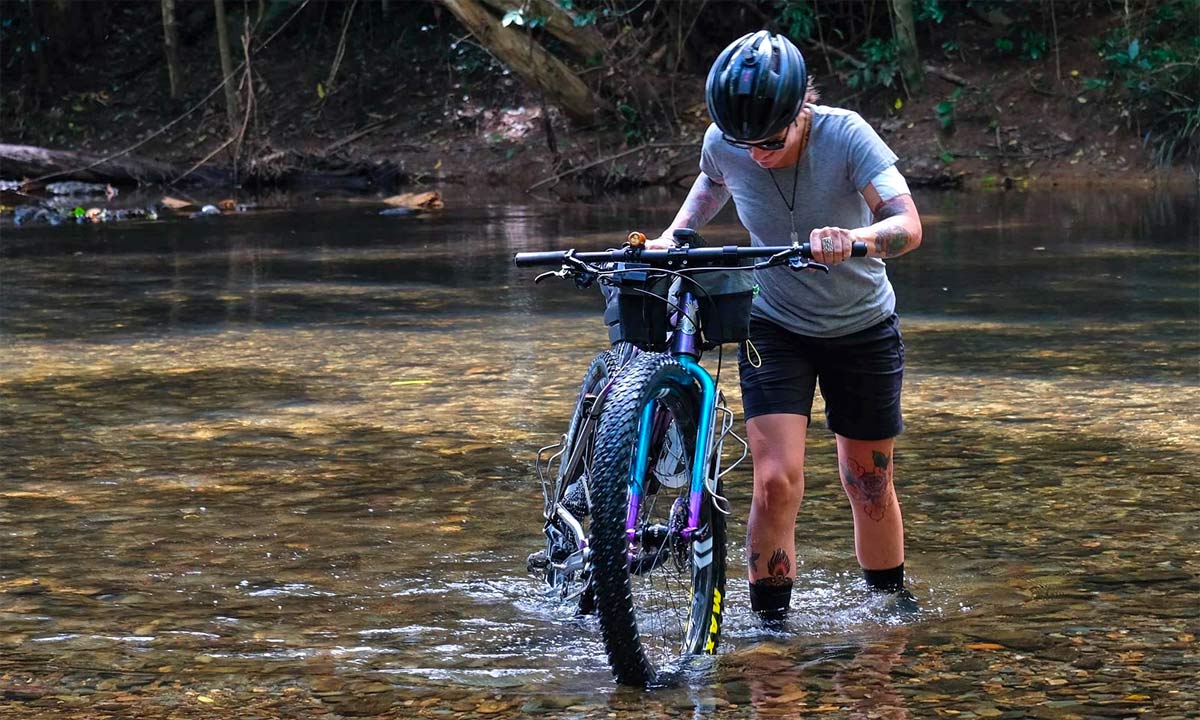 Or pre-order your frame now, and Curve will work with you to spec out a complete custom bike build package on an individual basis before the frames are ready to ship.

I’d like to know how long it takes to set up and unload that bike, and then having to stop just to take a drink form your water bottle.Sure hope it wasn’t an over nighter.
I love to bike tour, and the whole problem I see with that bike clutter can be resolved with a rear rack and a good set of Arkel panniers and an Arkel front handlebar bag. The tent and bag can be bunggied to the rear rack, and I can ride and drink at the same time.Besides, most people you meet while out on their adventure bring along too much stuff they don’t need. :

Yea but it’s better to shred single track when available

off road touring simply doesn’t work with panniers, especially single track. hike-a-bikes are difficult, and the farther the weight is from the center axis of the bike, the harder it is to balance.

How does it simply “not work”? The width isn’t that much greater, so assuming equal loads, there’s not much to your claim. Seat bags and top tube bags raise the center of gravity, as opposed to a typical 5 bag pannier setup. The weight is closer to the ends of three bike though. The bags are likely lighter overall, I’ll give you that. I’d say an occupied main triangle is a lot harder to grab. To each their own.

Gerald, the water bottles are easily accessible while riding. Not the one under the downtube obviously, but two litres on the sides of the downtube (if using the full frame bag setup pictured) gets you a long way.

@Gerald – have you noticed the purpose of this bike? Heavy duty off road bike packing. Try doing that with your panniers!

I don’t think panniers preclude offroad use, especially when you compare slim versions to big stuff sacks. Really the issue is that when “bikepacking” became a thing, most of the rack innovation stopped. There are a few minimal designs out there now, but I don’t think giant bottle cages are the perfect stop gap. More(bags)=more, there’s no denying that. I think it comes down to length of trip, where an extended tour benefits from simplicity in packing.

Looking past the packing choice, these bikes are pretty cool. Not too far off what I’ve been using myself, except the 3″ tires. Can’t say 75cm bars will work for many people, although the shape looks good. A wide tire fork that isn’t suspension corrected, is refreshing.

Would this bike be any good on the road with skinny tyres in uk winter? Obviously a long way from being a purebred roadie but I quite like training on the road in winter with mates on carbon. I would have to work harder to keep up but that’s also good training. Thoughts?