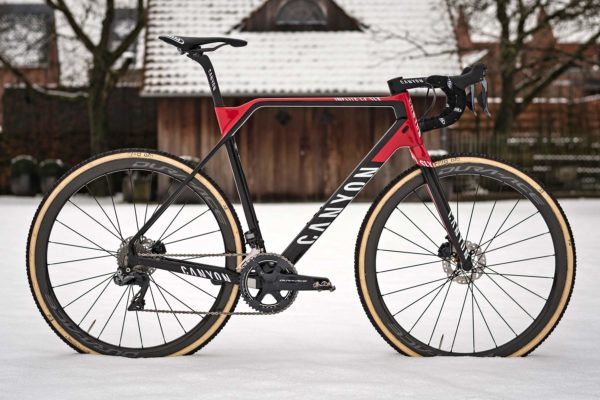 Introduced just before the start of cyclocross season this fall, Canyon’s new carbon Inflite CF SLX has found its way under some of the top cyclocrossers in the world rather quickly. It wasn’t much of a surprise to see ex elite women’s World Champ Pauline Ferrand-Prévot racing the new bike as she crosses over into road and mountain on her Canyon//SRAM pro team. But ex men’s elite World Champ Mathieu van der Poel was more of a surprise as Canyon took over bike sponsorship from Stevens for his Corendon-Circus team from the start of January. 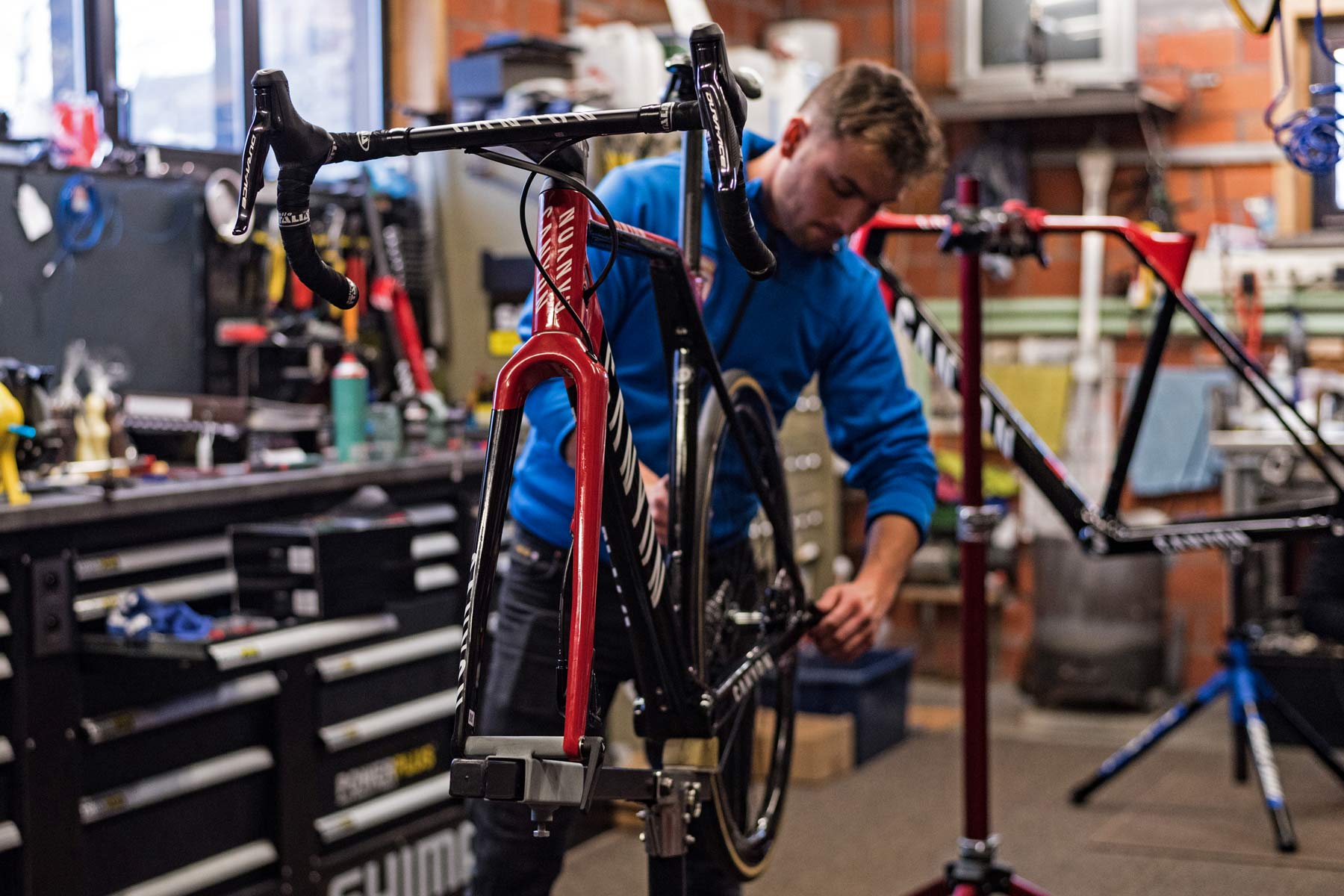 Mathieu van der Poel has been dominating the World Cup series this season, and seems to have made a smooth shift from the Super Prestige that he rode since his pro debut to this new carbon Inflite. 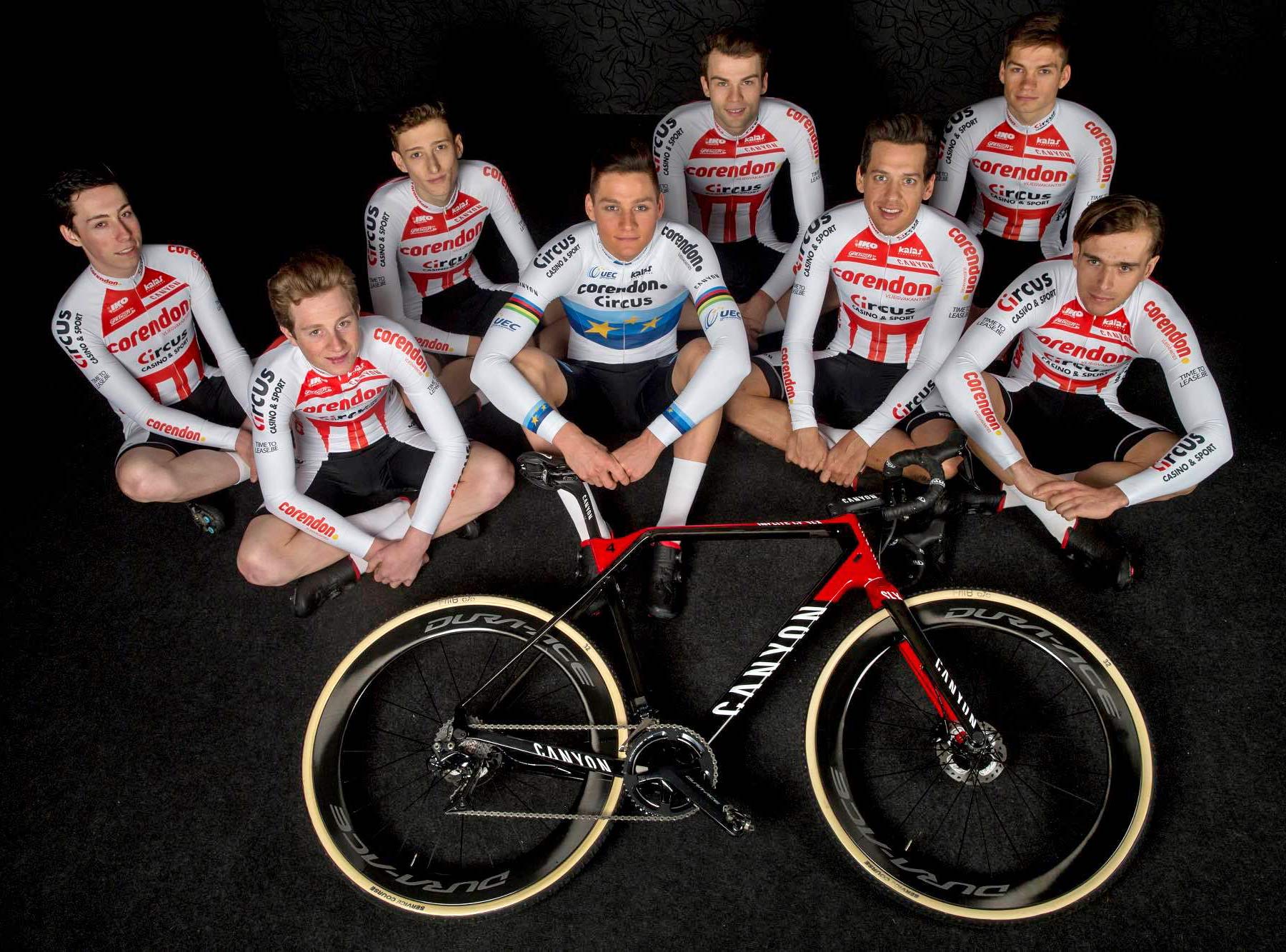 It seems the impetus of the move somewhat comes from van der Poel’s crossover plans to the cross-country mountain bike, targeting the XCO race at the Tokyo Olympics in 2020. 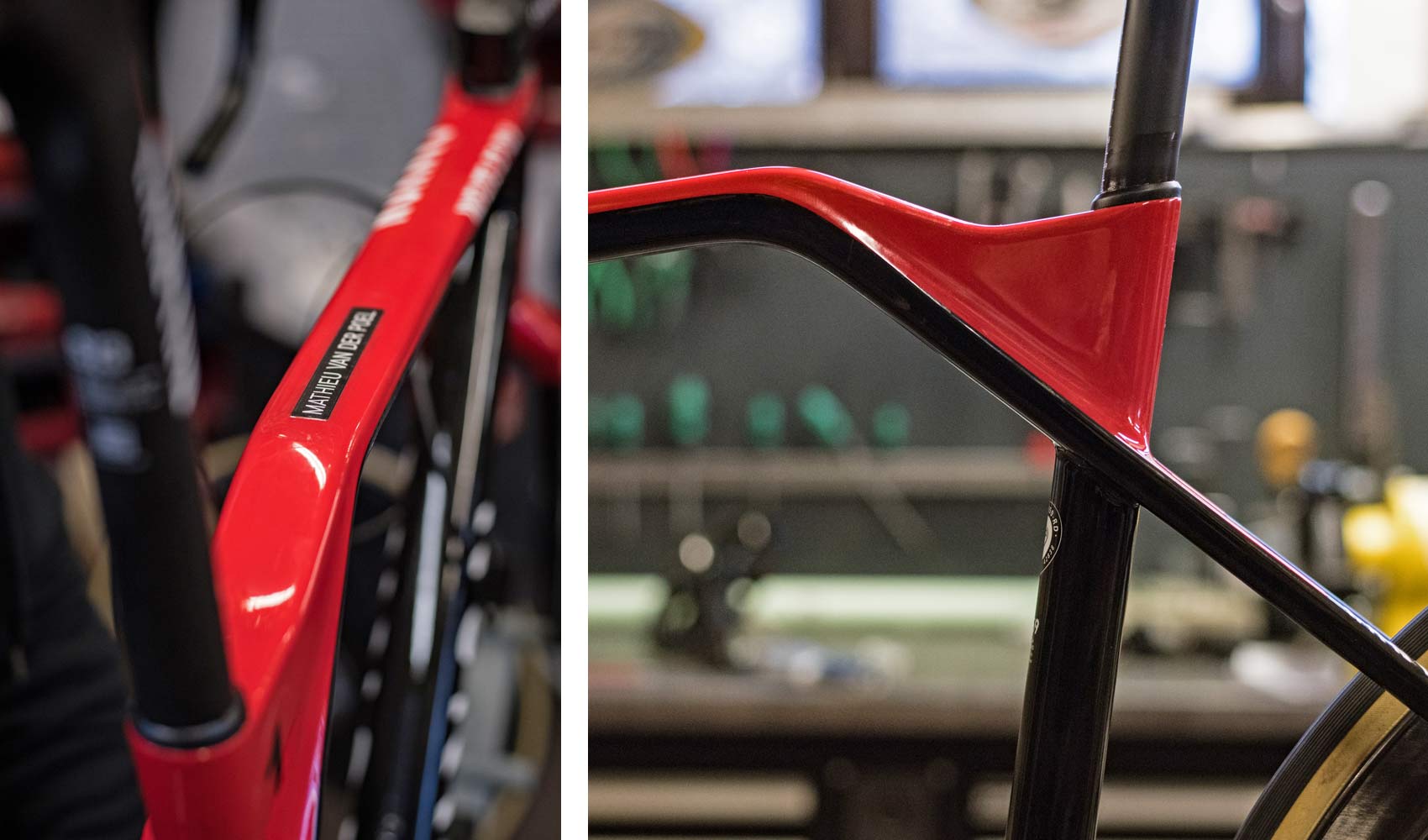 Van der Poel has raced a number of custom finished bikes in the past, but for now is riding a standard Inflite CF SLX in team-issued red & black with its distinctive bent toptube in front of the seat cluster, and simple rider name & bike number decals. With the bike switch, the team continues on mostly the same bike builds, racing new Shimano Dura-Ace 2×11 Di2 drivetrain, hydraulic disc brakes, and wheels, wrapped in FMB tubulars.

Now Canyon takes over the cockpit with an integrated bar/stem combo and seatposts topped with Selle Italia saddles. Much like Frenchwoman Ferrand-Prévot, he will be able to take advantage of Canyon’s top-level XC race bike fleet as well, together with his Belgian Corendon-Circus team. 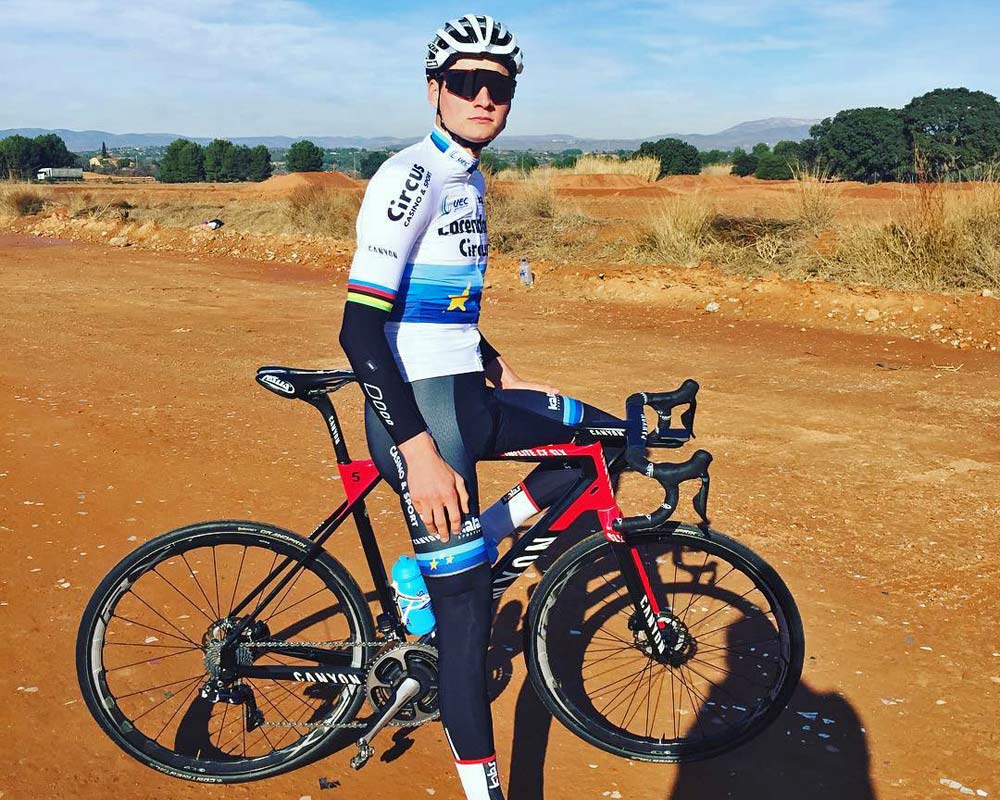 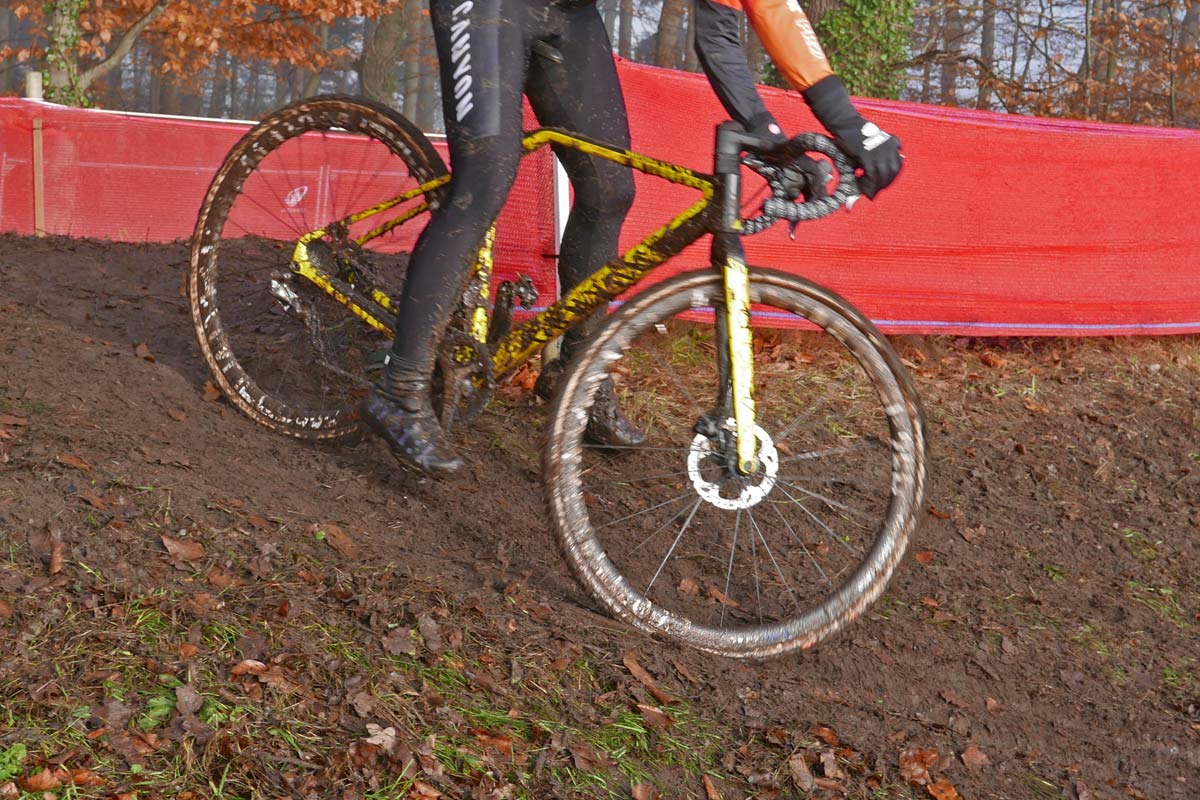 Pauline Ferrand-Prévot – having been the only rider to ever hold the World Champ title on the road, cross & cross-country at the same time – got an earlier start on the new carbon Inflite CF SLX from the start of this cyclocross season. 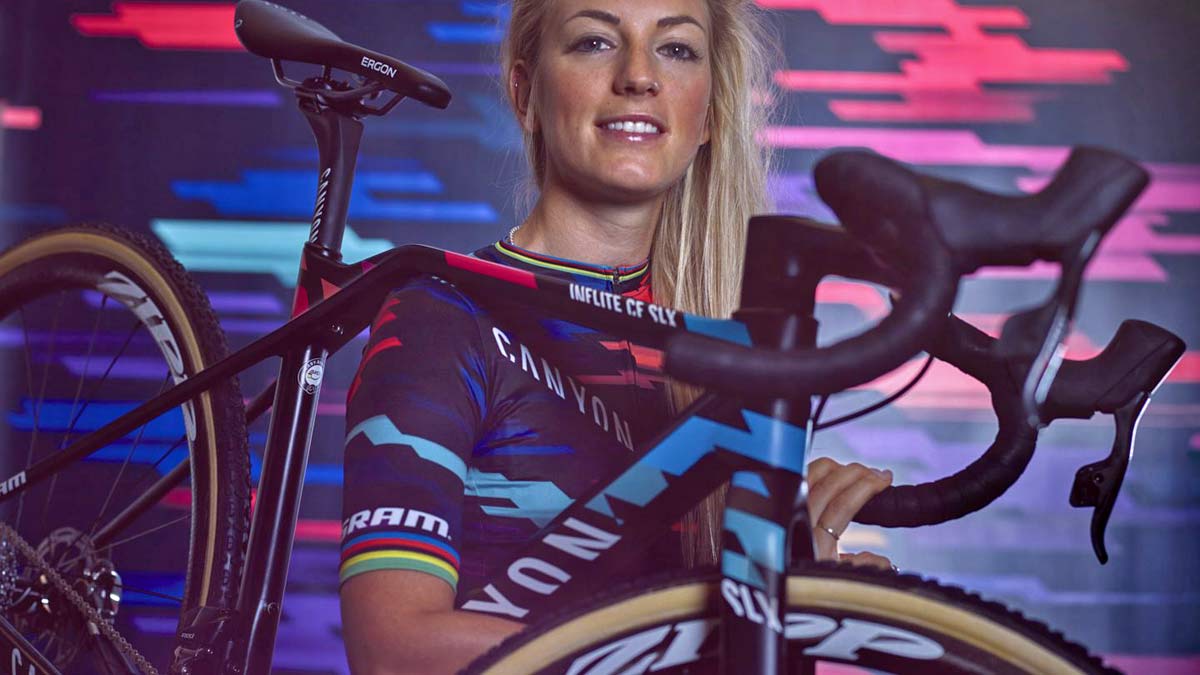 Building back into her race form after taking last season off from cross, Ferrand-Prévot has already earned a couple of top 5 finishes on the World Cup with the new bike. While she was one of a few Canyon rider who started the season on the stock yellow & black bikes that consumers can get straight from Canyon, she’s since moved on to a fleet of Canyon//SRAM team edition bikes. 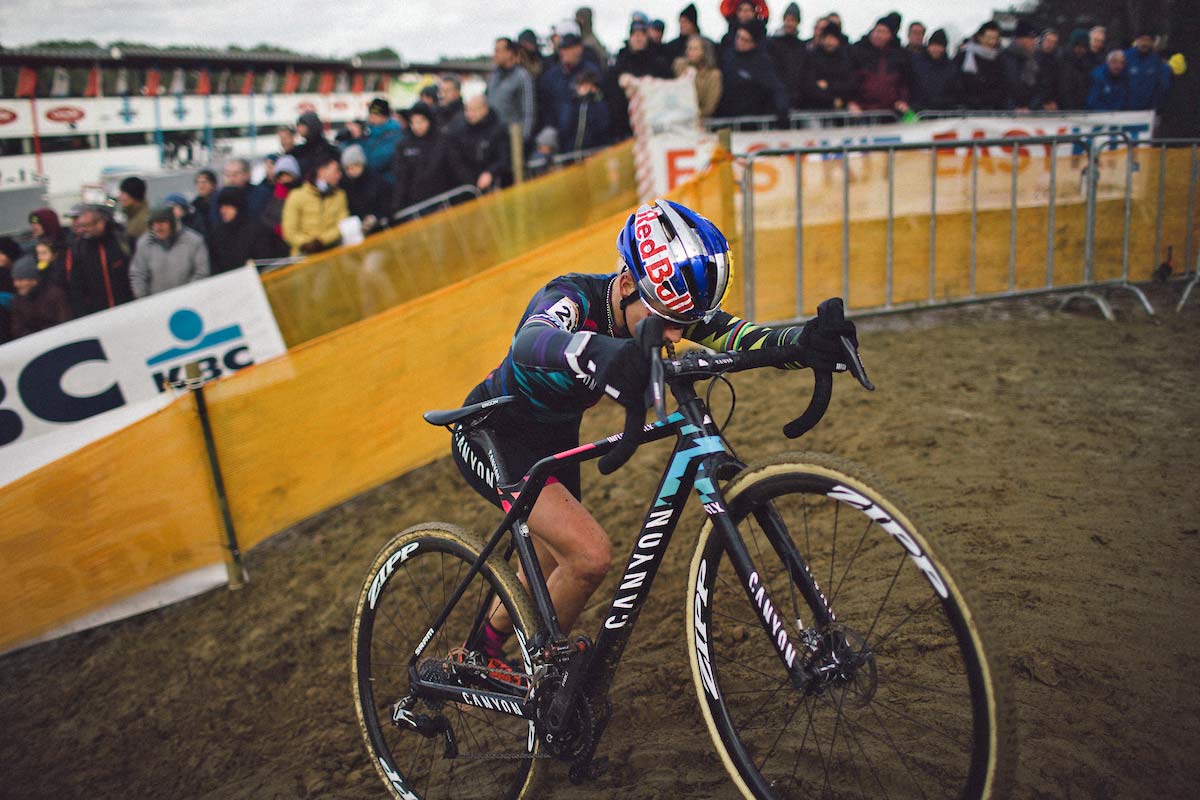 Interesting that both Ferrand-Prévot and Nikki Brammier (who has also switched to Canyon from 1st January) are running a lot of spacers under their stems. MvdP has his slammed.

Maybe there is a height/reach issue, and to get the right reach means a smaller frame, and then pushing the bars up?

MVdP is just a typical pro cycling freak, running more saddle/bar drop than he probably should. Typically, smaller women have a more difficult time arriving at a low enough bar height on CX bikes and 29er’s (especially 29er’s) because of how tall the necessary parts add up to.

Agreed, MVdP runs a 120 stem which is ill advised for a cx bike, but he’s the best rider in the world, not me.

Correct PVP is also a smaller woman and typically women have higher stack shorter reach based upon torso length. My understanding is that Canyon do not make this frame in womens specific build. Funny how common crazy long/low stems are these days. I was looking at one of lances TDF bikes last week and amazed at his weekend warrior-esque spacer stack seemed to work well for him.

Dammit….as much as I thought this bike was ugly a month ago its already grown on me 😛

Nice to see Pauline Ferrand-Prevot back in ‘cross action too.

Think the bike looks fine except for the ball-breaking top tube.

Why is Canyon such a cool thing now? Is it just another grass is greener on the other side situation? This bike is just ugly. All I can think is that these are super hyped and everyone gets a “pro” discount buying direct.

Disclaimer: I’ve actually only had bad experiences ordering kit from Canyon so far; dunno if it’s a problem with them, UPS or the integration between their respective systems but they _cannot_ get my delivery address right if their lives depended on it, it seems.

I’m guessing you’re based in the United States? Currently the US options aren’t great but their EU line of products is great value and as the previous comments said they don’t really molest the groupsets that come on their bikes

Actually doing a little investigation, even in the US an AEROAD CF SLX 8.0 is $500 cheaper than a comparable Cervelo (R3 Ultegra 8000) both have almost identical spec except the Canyon has Reynolds Strike carbon clinchers and good tires whilst the Cervelo has a basic alloy training wheelset and garbage tires.