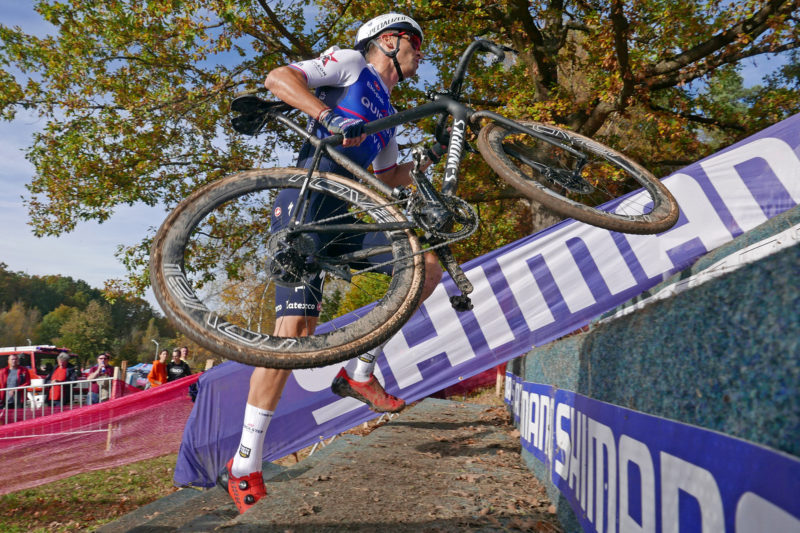 What kind of cross bike does a multiple World Champ who’s transitioned to road racing (and more-recently gravel) race when he returns to his home track? In the case of Zdenek Stybar… it’s an ultralight, almost stock carbon S-Works Crux, but with customized fast-rolling tubulars on aero carbon road wheels. It may have been more than a decade since Štyby last raced cross in Tábor, but he was mining muscle memory and technical skill to conquer the race course on his fast setup… 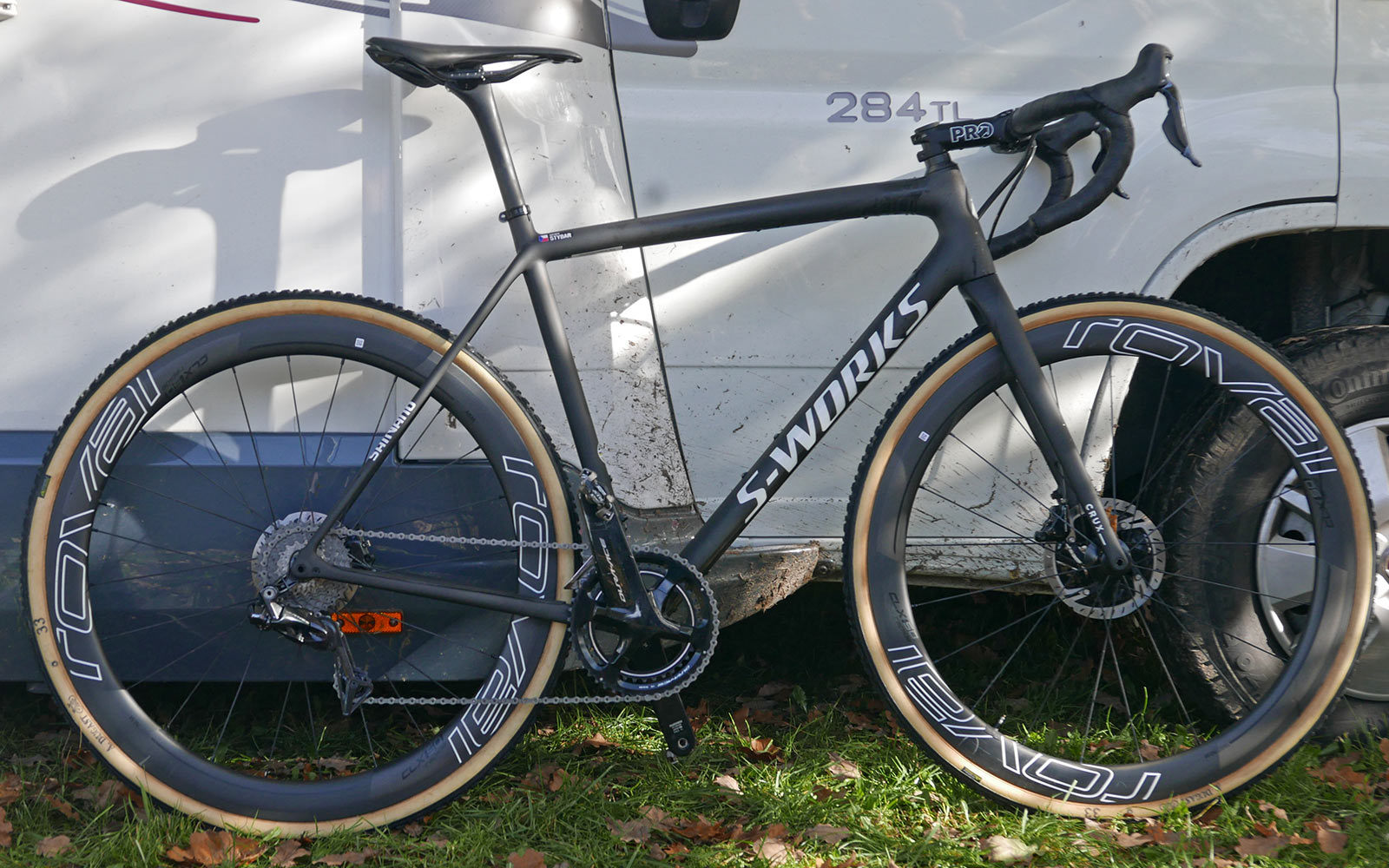 all photos by Cory Benson

At the weekend’s CX World Cup, 3x Cyclocross World Champion and 7x Czech National Champ Zdeněk Štybar returned to Tábor eleven years after he had won his 2nd set of rainbow stripes there. And it wasn’t really an attempt at a comeback, but rather a move to support the home venue ahead of its return to hosting the World Championships next winter.

Štybar was racing on Specialized’s new top S-Works Crux carbon cyclocross bike. With the stock matte carbon finish available on the $5000 S-Works frameset, his bike was built up with a mix of new & old kit from his road team sponsors. 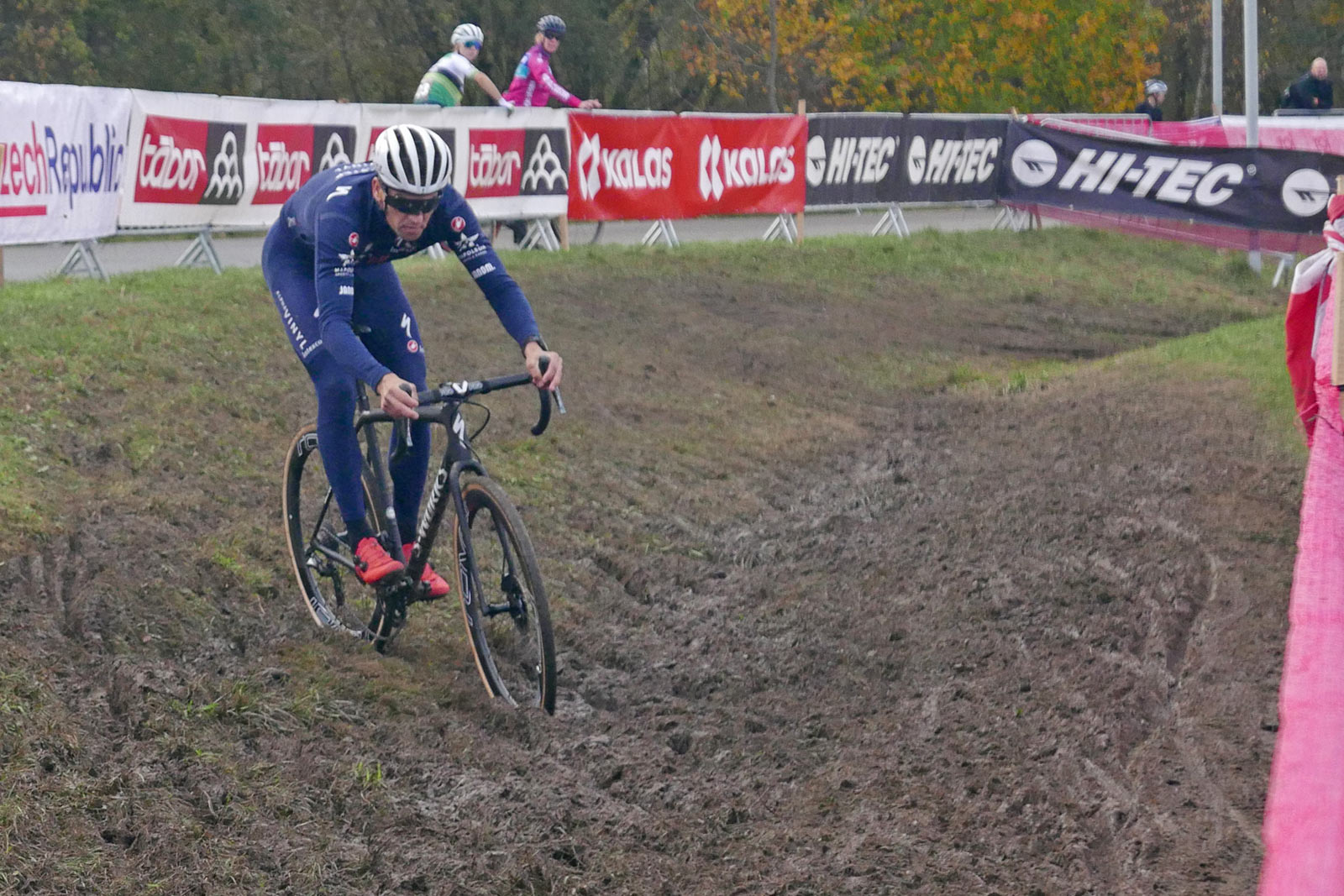 Plus, it was also a good opportunity to support & encourage the young up-and-coming riders of the Czech national team.

Even though Štyby races for Quick-Step, one of the biggest professional road racing teams in the world, he wasn’t off hiding in some fancy team bus. Instead, fellow Czech racers and throngs of fans could find him warming up in the pits with the national federation next to Junior & U23 racers. 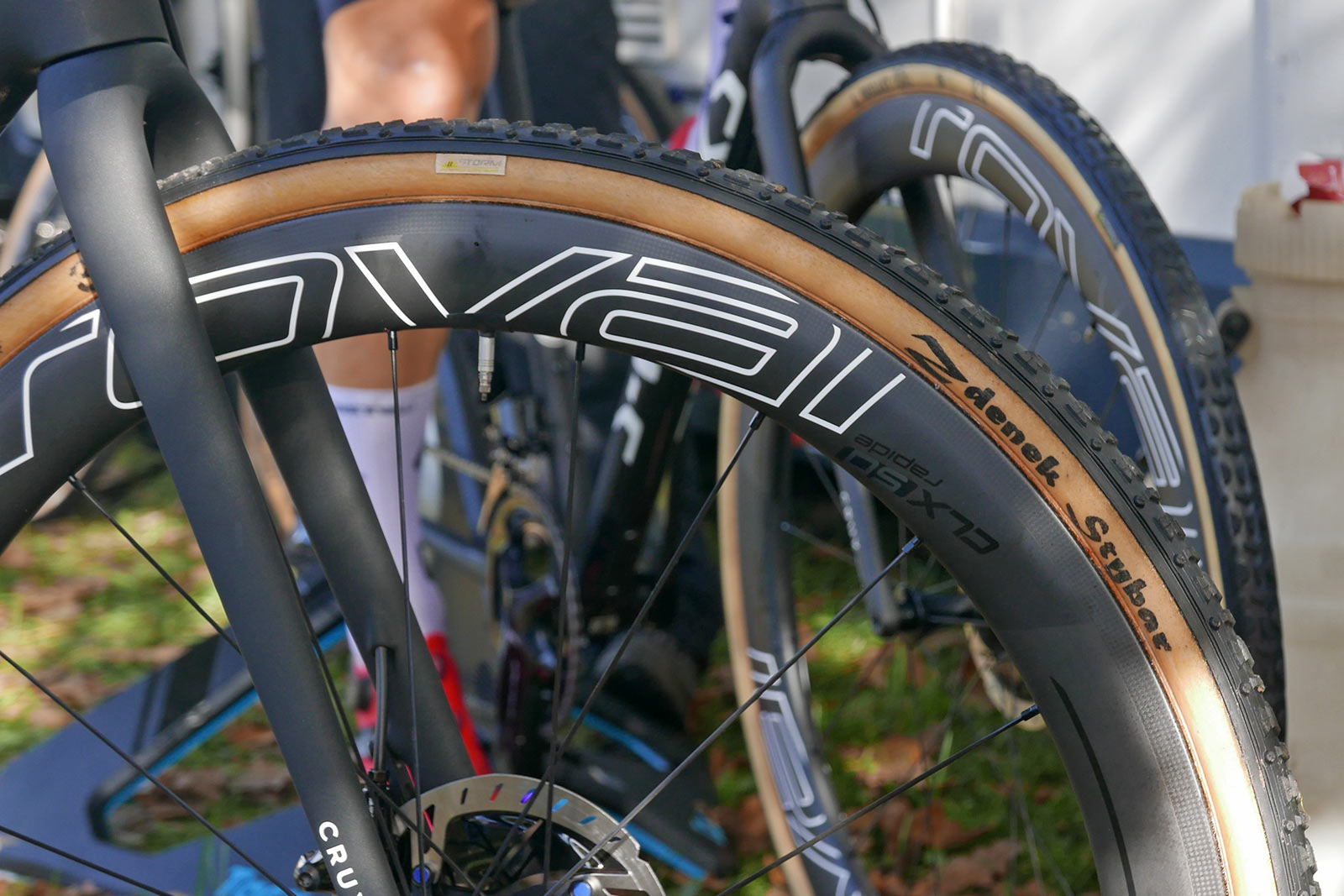 As is often the case in a cross race, tires make all the difference. And the Tábor World Cup course had a mix of deep muddy ruts, a few greasy slick climbs, but a lot of drier grassy sections.

One of the more custom elements of Štybar’s cross race bike build was his wheel & tire combo. You have to be a pretty big name rider for Dugast to make a custom stencil to put your name on your tubular tires. The trouble is, it seems Štyby only had custom Dugasts in their all-rounder Typhoon (above) and wet conditions Rhino (spare wheels below) treads.

After a few laps of pre-race recon, Štybar decided he’d be quicker on file treads… 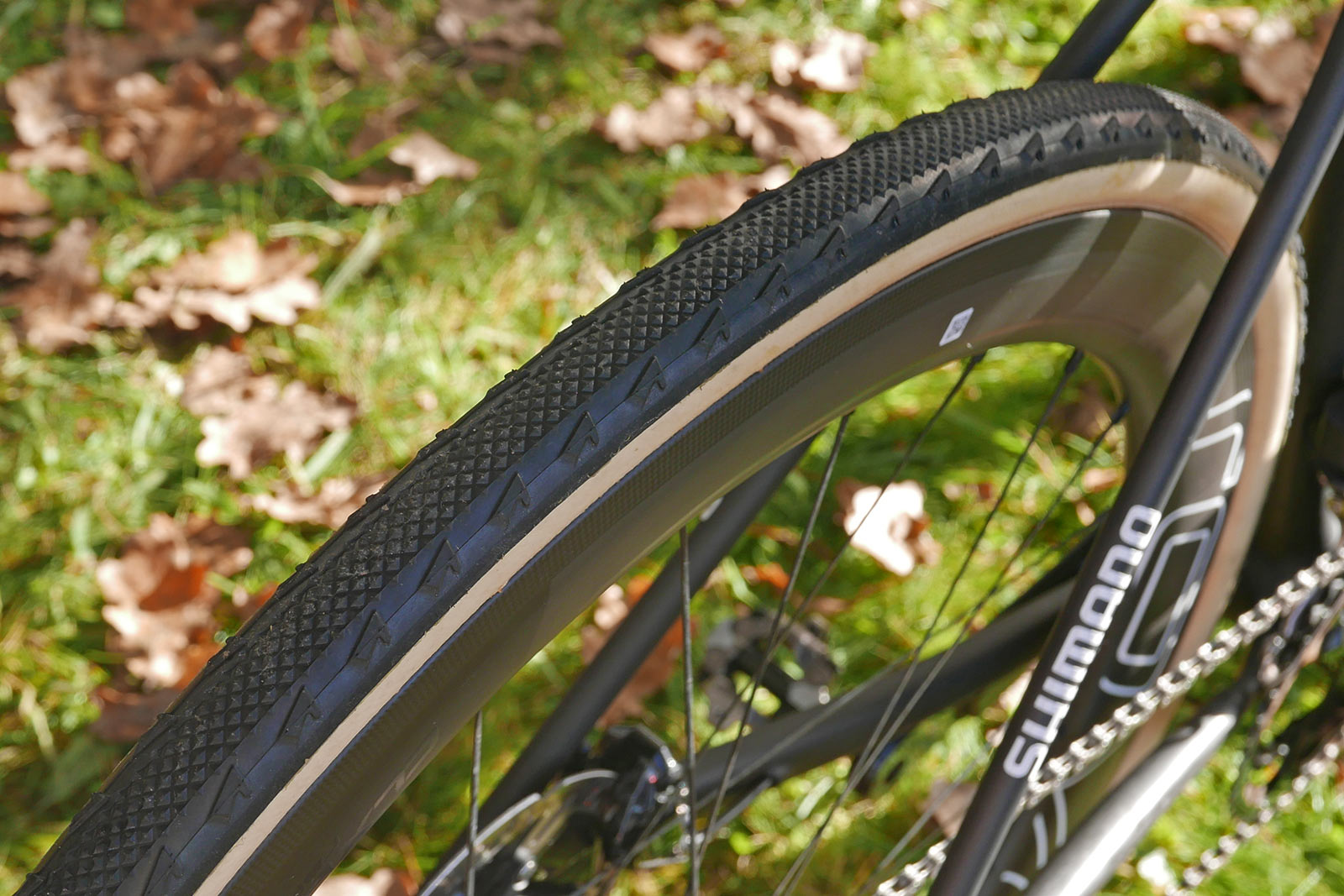 While most of the other Elite riders were on all-rounder tires, Zdenek Stybar’s S-Works Crux was racing on 33m Dugast Pipisquallo tires that mix a fast-rolling narrow file tread with the aggressive arrow–shaped shoulder knobs of Dugast’s mud tire for cornering grip. 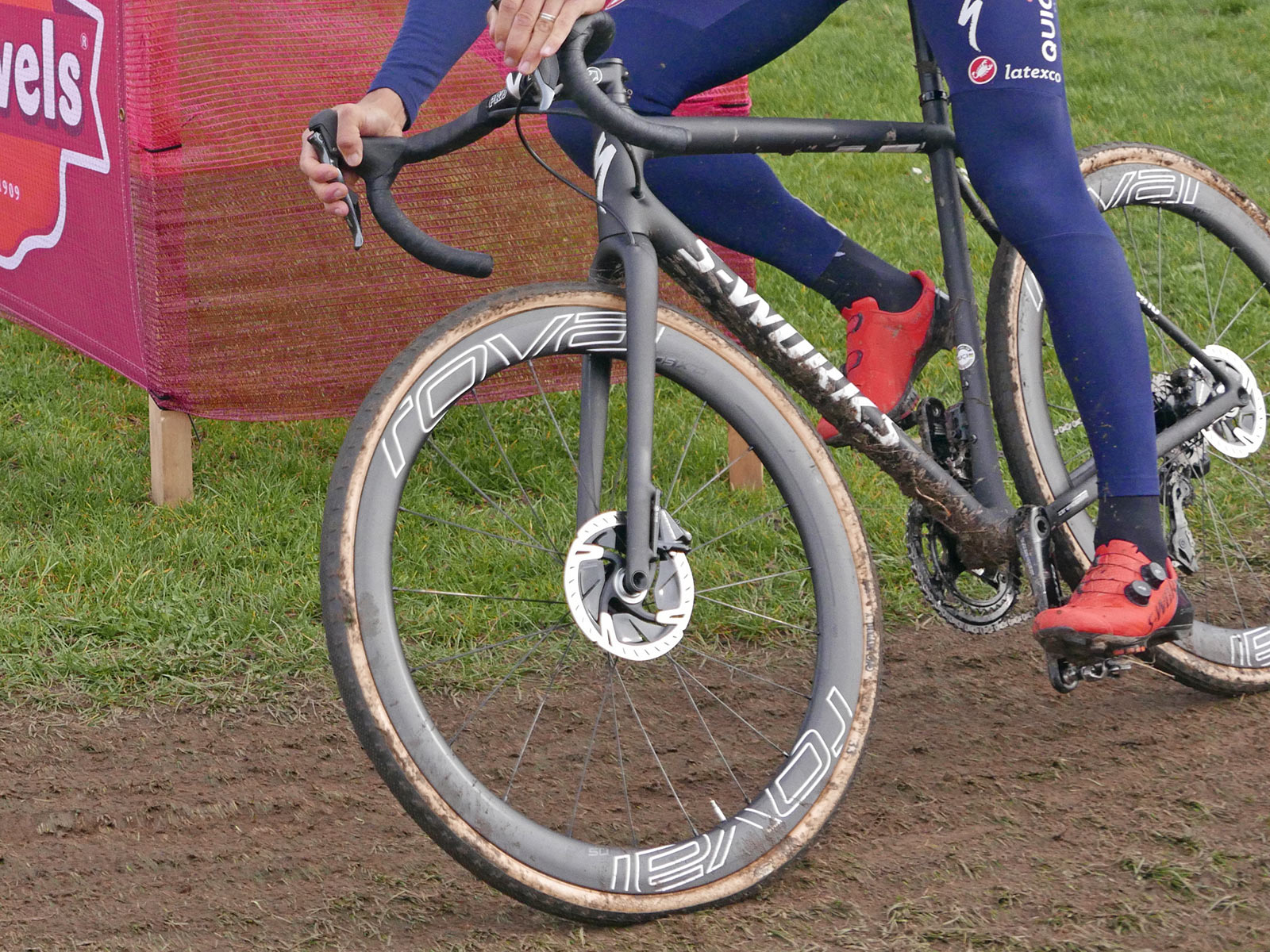 It seemed to work out well for the notoriously technically-skilled rider. And even though his sidewalls, wheels, and downtube ended up pretty muddy through practice laps and again in the race, he did seem to lose any time in the wetter sections of the course. Plus, fewer knobs meant less mud & grass plastered to the bike, and fewer trips into the pit to swap for a lighter, cleaner bike. 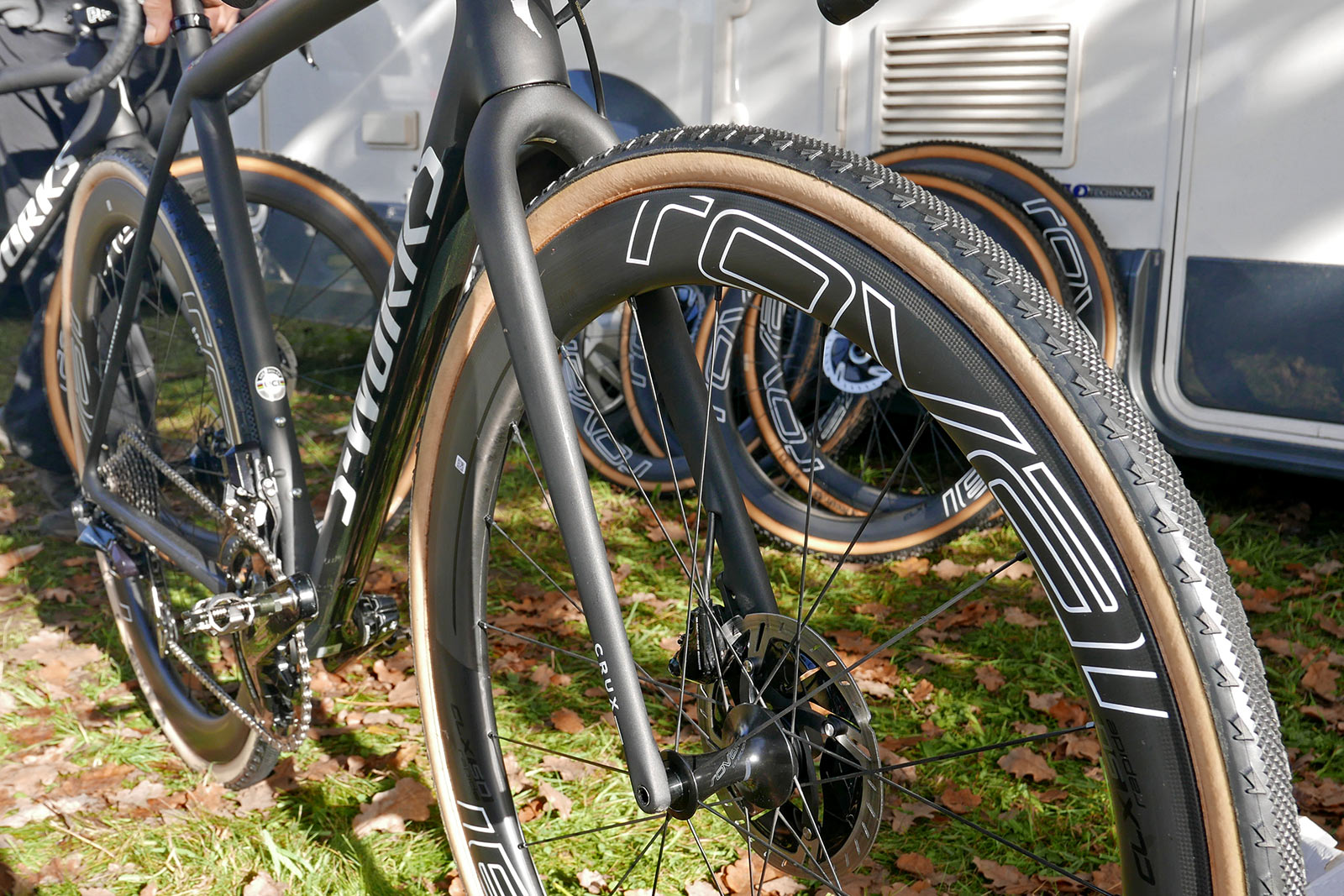 Štybar’s bike was already pretty light to start with. Most cross bikes don’t usually push the UCI’s 6.8kg weight limit. But starting with a claimed 725g carbon frame for the new S-Works Crux and a build kit not so different than what he’d race on the roads besides the wider tires, I can’t imagine this bike is much heavier than that minimum allowable threshold. 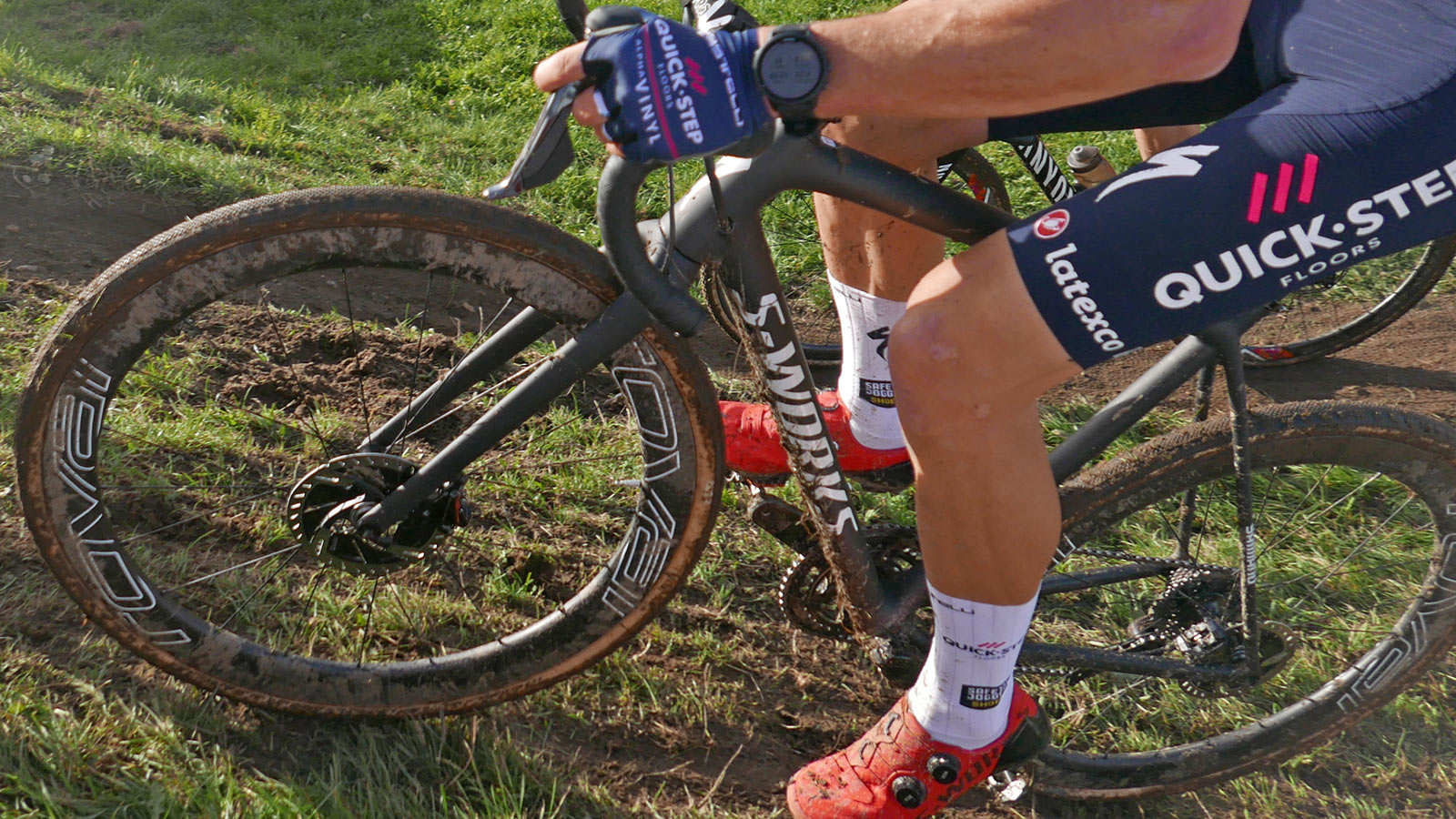 One component that does stand out a bit amongst newer cross or even road tech, Stybar is of course still racing on tubular tires, but Roval’s latest Rapide CLX wheels are tubeless or clincher only. So Štyby races the previous generation Roval Rapide CLX50, where the same max 27.4mm external aero carbon tubular rim is shared between both rim brake and disc brake wheels. 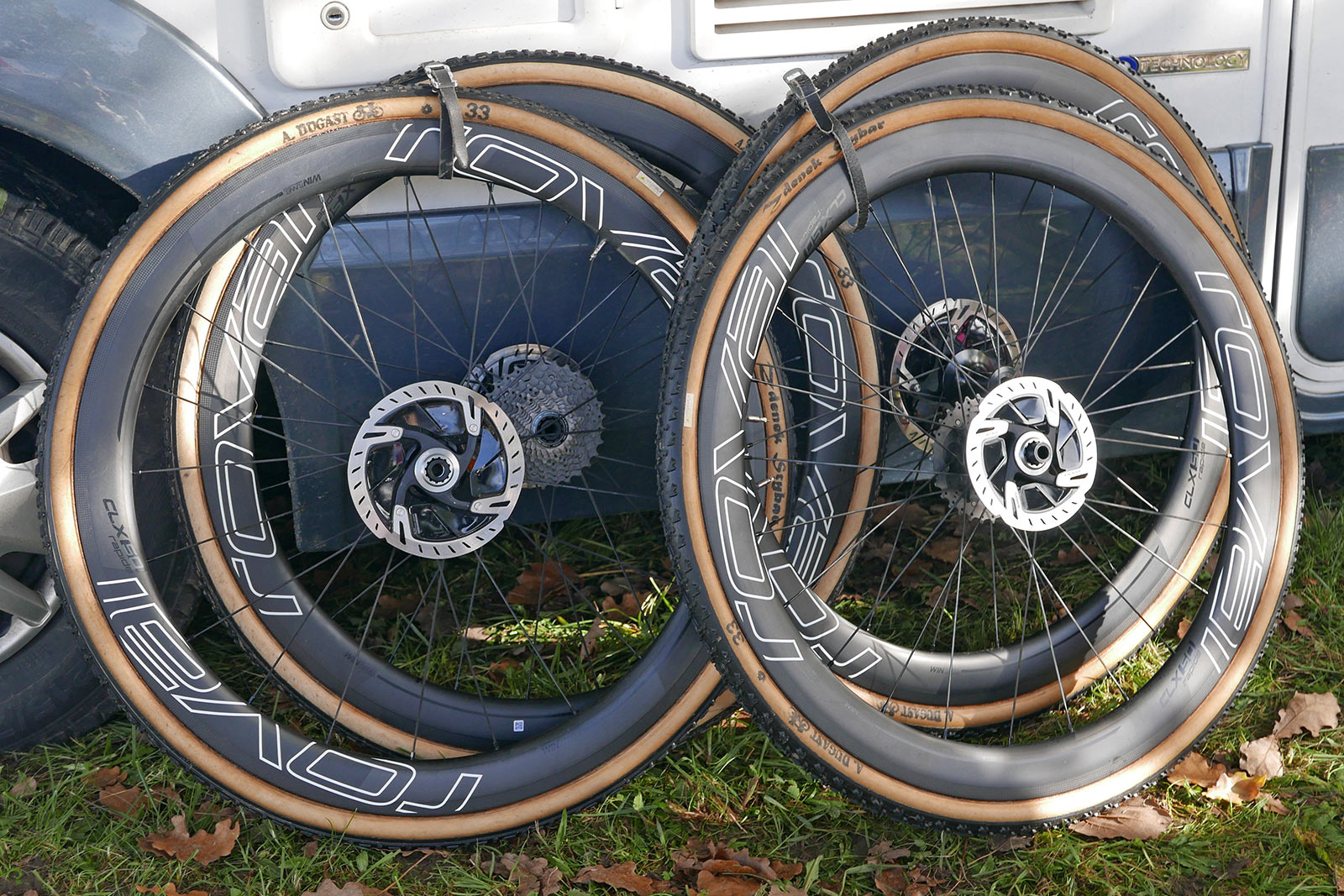 And with tons of the road-oriented tubular wheels available from Stybar’s Quick-Step team – especially as the team has been racing more on tubeless tires and even with inner tubes – there were plenty of wheelsets available for assorted tire selections.

He had plenty of Zdenek Stybar-labeled Dugast tires of all sorts on hand, with his team mechanics carrying Rhino & Typhoon tires to the race pits, in case changing weather or track conditions made a mid-race tire swap make sense. 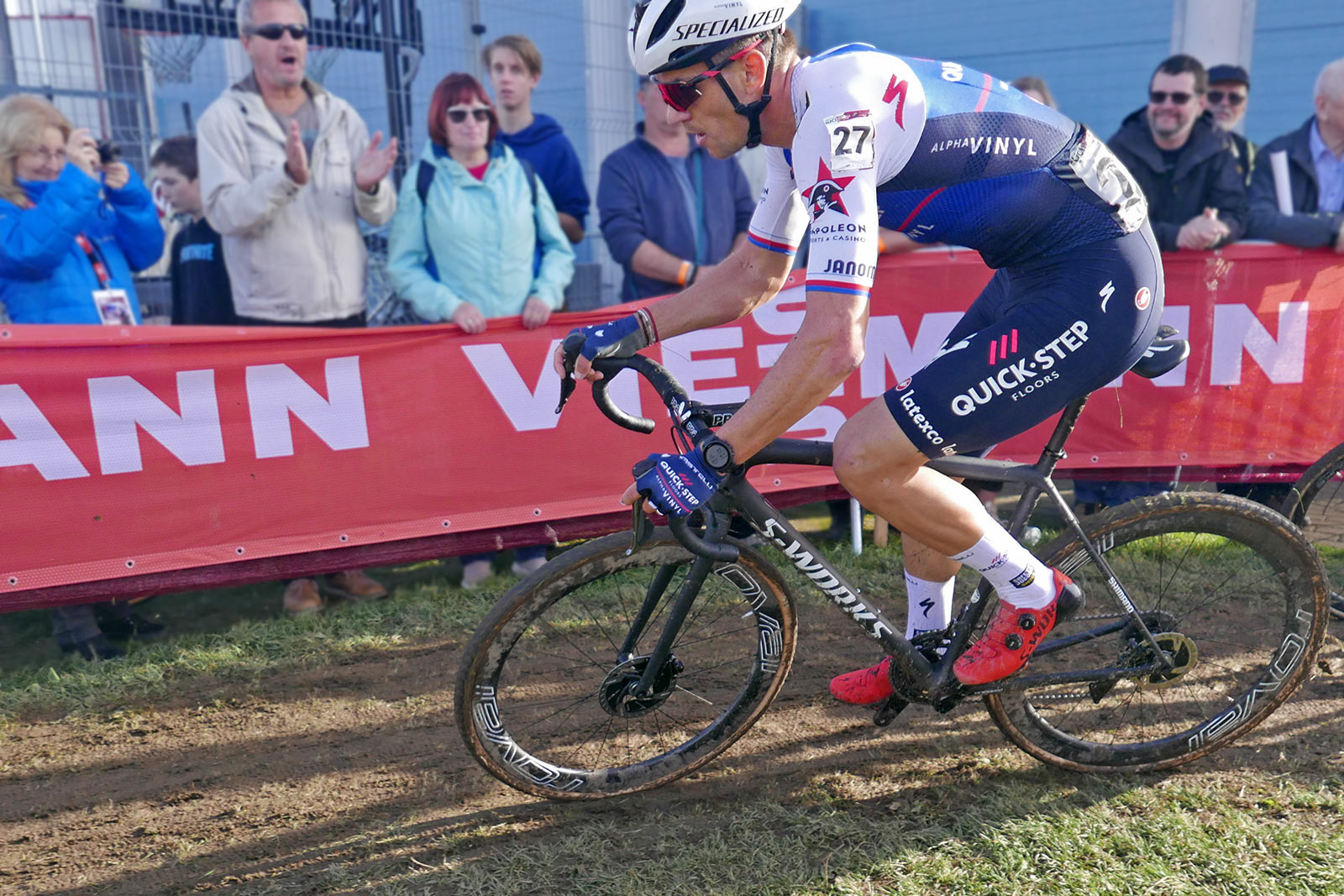 But, looks like the Pipisquallos did well enough for the Czech rider. 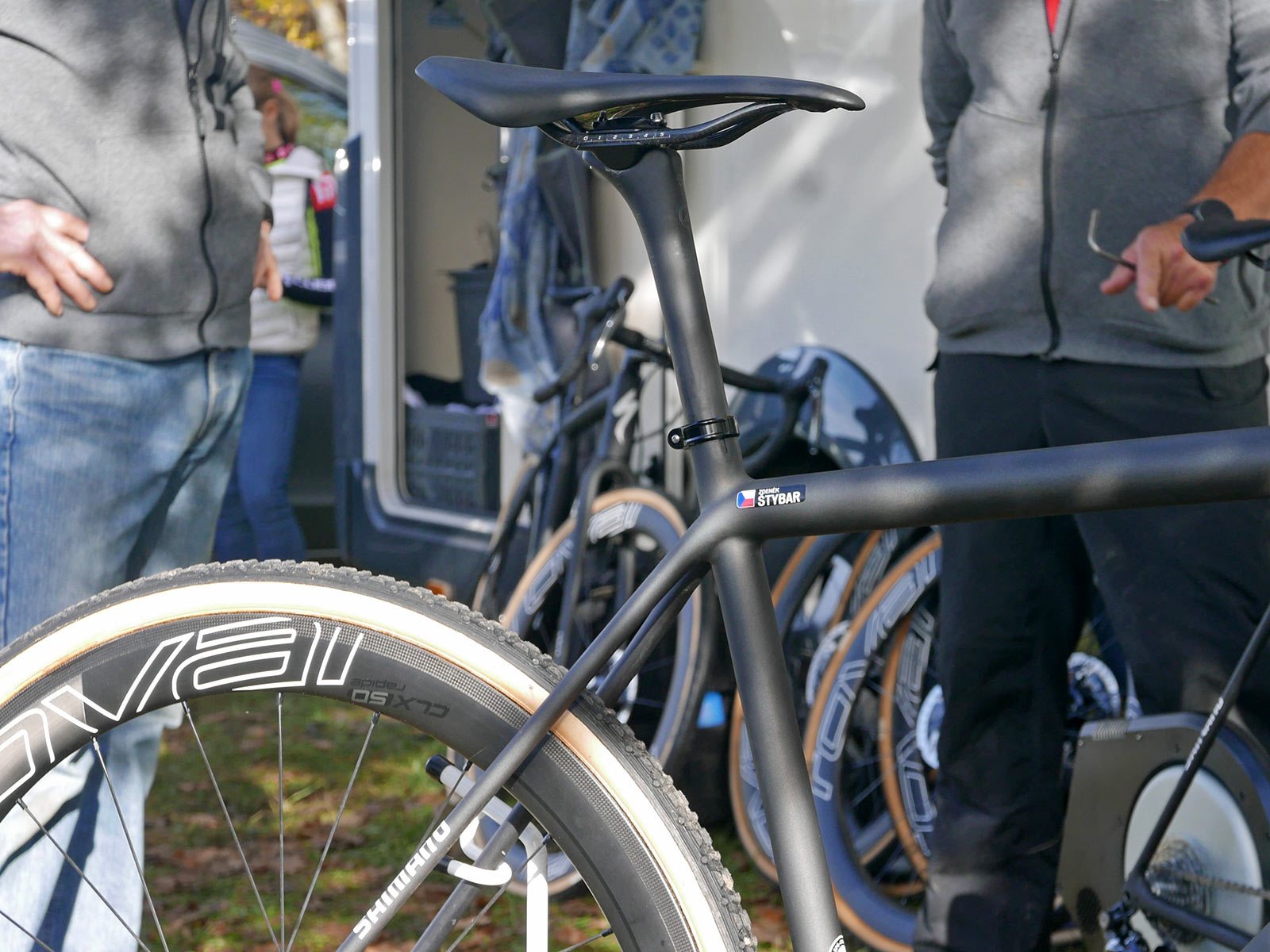 Rounding out Štybar’s build are more road-light components with what looks like some veteran preferences. Because who wants to change what already works. Zdenek Stybar has been racing cross for almost 20 years, and as a full-time road pro since 2011.

So he sits atop an out-of-production Specialized Toupé carbon-railed saddle mounted to a newer ultralight carbon Roval Alpinist seatpost. I guess he isn’t a fan of their short-fit Power saddles or the newest 3D-printed Mirror saddles – although the fewer holes in a cyclocross saddle the better when the mud starts flying! 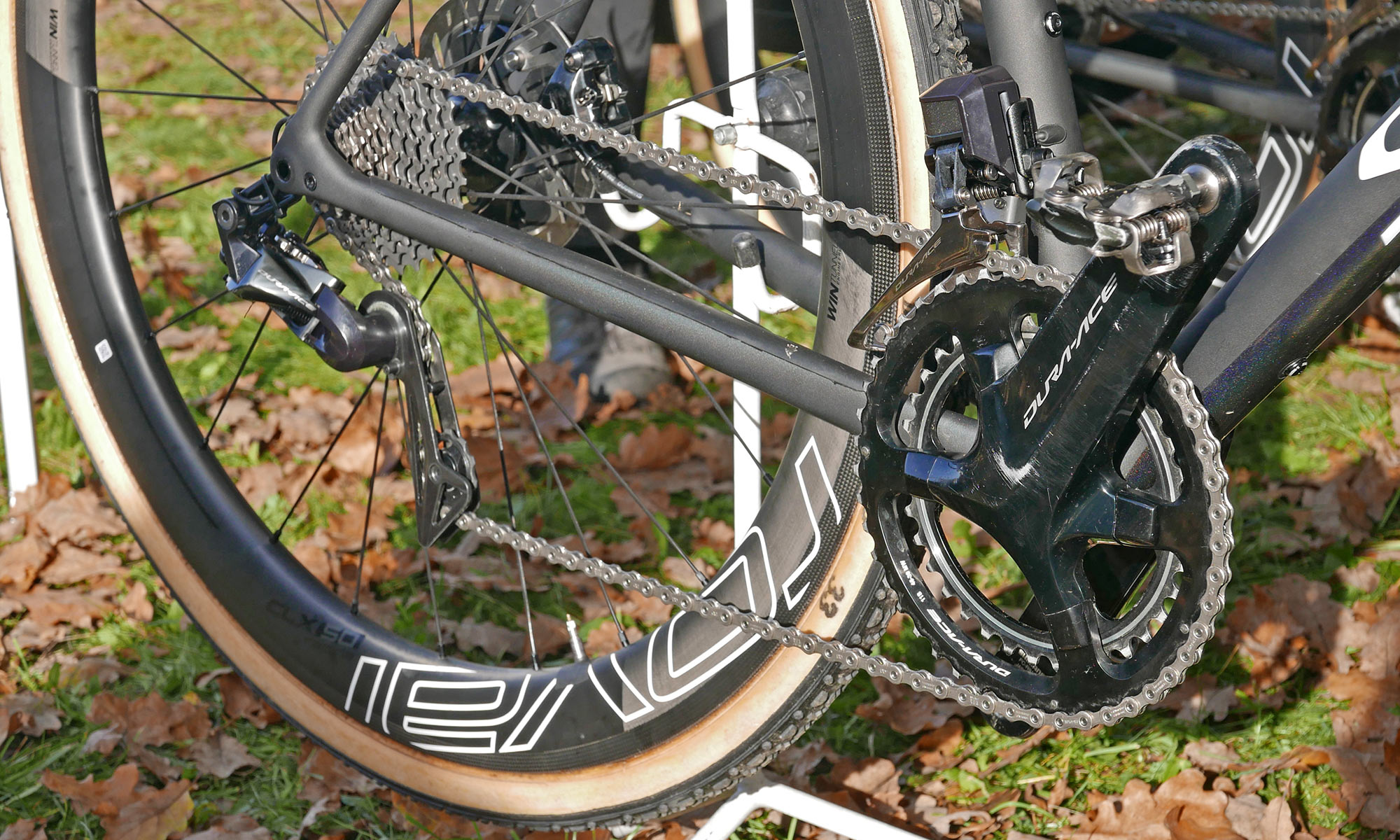 His Specialized S-Works Crux cross bikes also were all set up with the previous R9100 11-speed generation of Shimano’s Dura-Ace Di2 drivetrain with a CX-specific 46/39T crankset, instead of the newer 12-speed kit.

This would have been the top Shimano drivetrain when Stybar got his new S-Works Cruxes last season. And since he only races an abbreviated cyclocross schedule to train through the winter, it likely wouldn’t make sense to have to upgrade all of his cross bikes and wheels to switch to 12-speed. 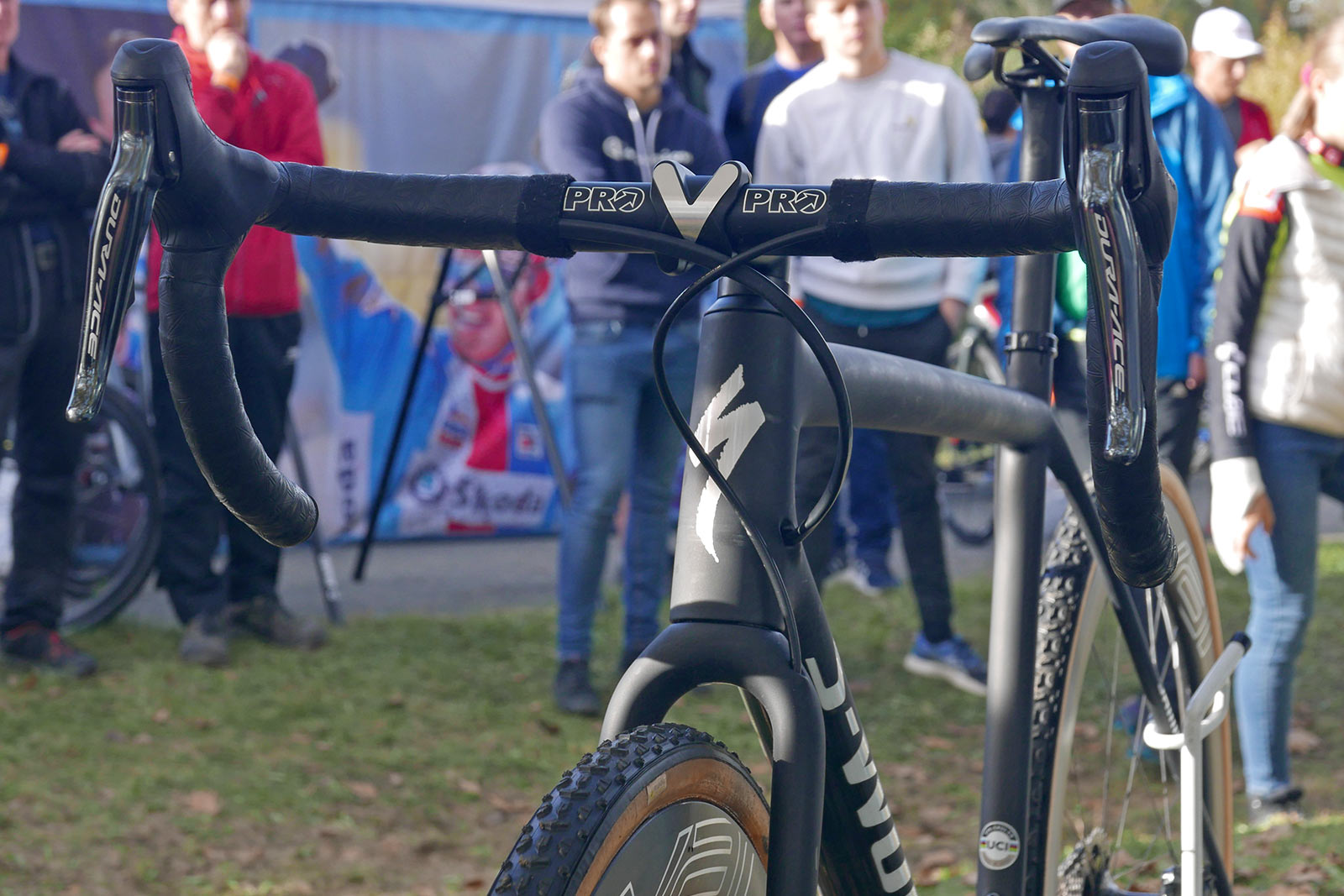 A PRO Vibe ally stem and carbon bar round out the crosser’s cockpit – still with external cables where they are easy to service, but at least some heat-shrink tubing to keep the Di2 wiring tidy with the righthand rear brake hydraulic line. No traditional Moto cyclocross brake setup here. 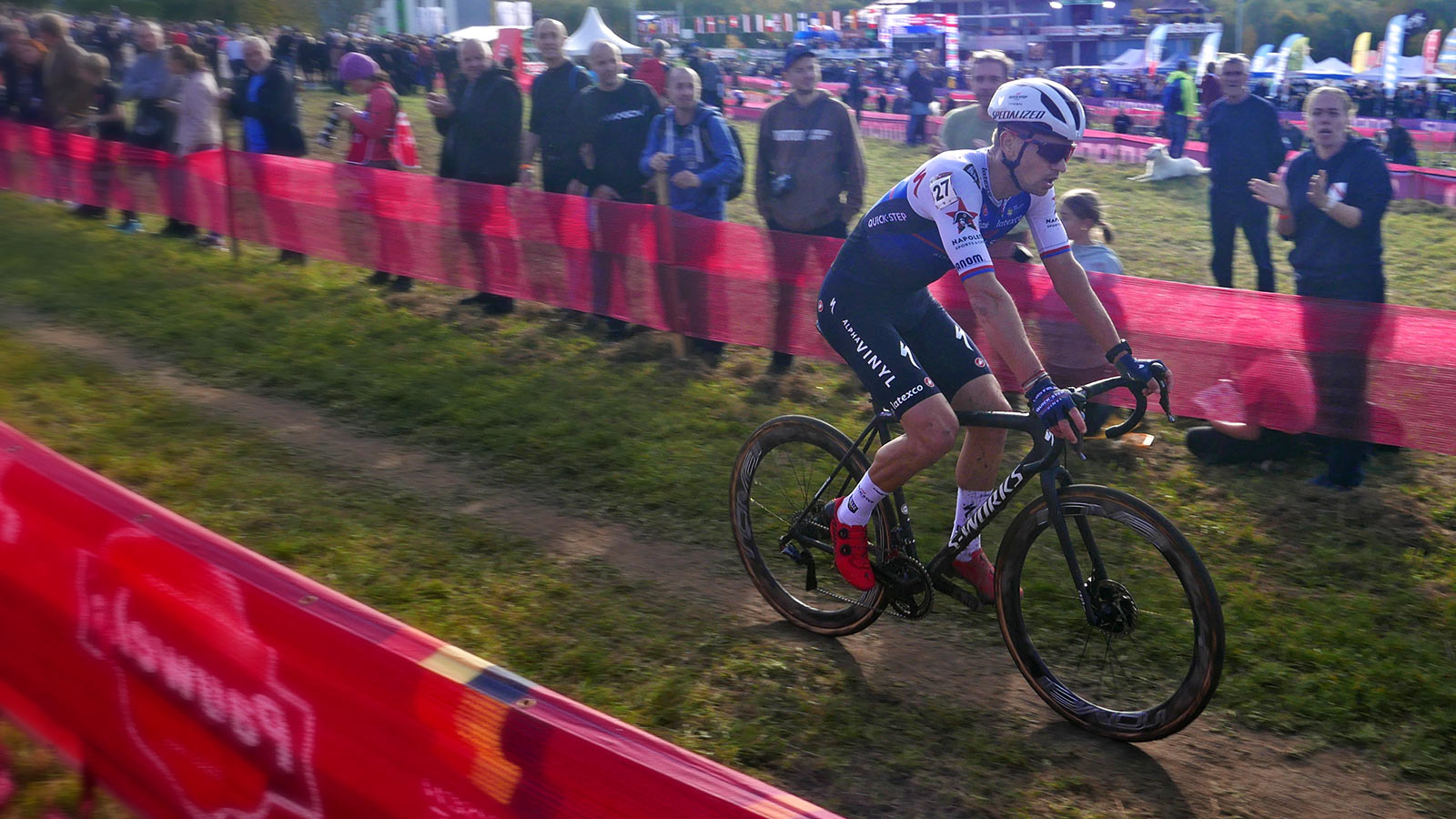 Without any UCI cross racing points, Štybar got a back-row start for the CX World Cup in Tábor. But he still managed to move up quite a bit – almost cracking the top-10, and ultimately finishing a respectable 17th an hour later -1 minute 46 seconds behind Belgian race winner Eli Iserbyt.

Štyby said that he had hoped for a bit better finish. But seemed OK with the result and was happy to come out for the fans, especially considering the last race he’d seriously been gunning for was the 5-hour-long inaugural Gravel World Championships where he finished 8th of 138, weirdly again 1 min 46 sec off the race winner’s time.