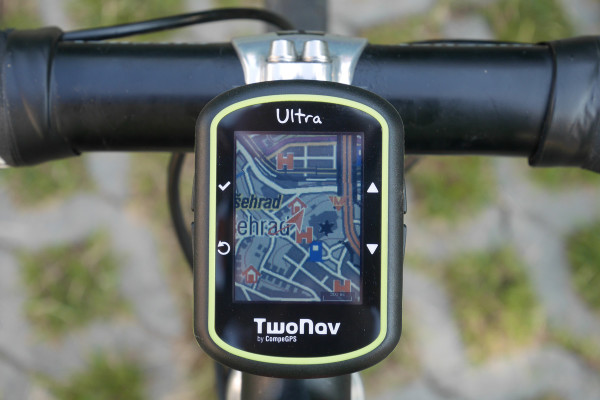 A few weeks back at a bike company’s product launch we had the chance to look at a new GPS cycling computer from a Spanish company that we’d never seen before. The bigger electronics company CompeGPS has a product range the appeals to cyclists under the TwoNav brand. We first got to try out the Anima+, a 3” touchscreen GPS (with a similar form factor to the Edge 800/810). We’ve since gotten a few rides in with the smaller 2” touchscreen Ultra, which offers the same excellent mapping in a unit somewhere between the Edge 500 & 510. The biggest standout features so far have been great detailed topo mapping and surprising visibility in bright sunlight. With a base map catalogue that exceeds every other cycling computer we’ve seen, the TwoNav units have really stood out, especially for off-road riding. 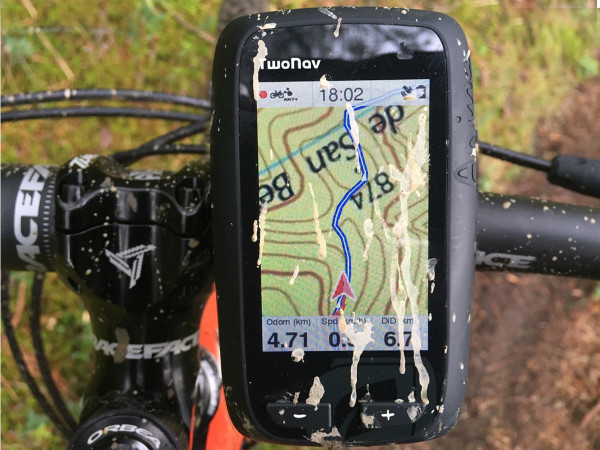 Our first experience with TwoNav was at the Orbea launch where company reps had set the devices up ahead of time with all the base maps we needed to explore the surrounding area on new bikes. One thing that can be difficult when we show up in a new unfamiliar locale to test some new bike is that to be able to ride and properly evaluate a new bike, we need to be able to kind of block out those riding around us a bit. But in new environs that brings with it the risk of losing track of our test group (or if there is one, our guide.) When we typically bring our normal cycling computer to some new test, it never seems that we have the best map data for the area, and at best we end up with a breadcrumb trail that will help us find out way back to our start point. With the Anima+ we had our detailed off-road course pre-loaded and excellent background maps that offered plenty of options for shortcuts back. It really gave us a better chance to sit back and think about the new bike. 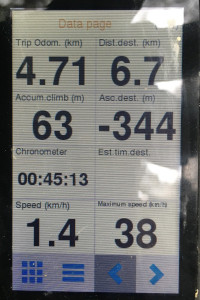 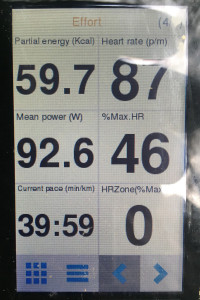 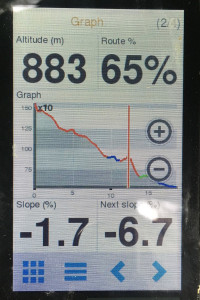 The menus and setup are not entirely simple and at times seemed a bit convoluted when we came from other big GPS providers. That said the setup is quite intuitive. Our second look came with a brand new factory default Ultra, that needed complete configuration. We went through all of the menus and touchscreen options without any instruction manual or guidance and didn’t really have any problems. True, it took longer than we had initially expected, but there was a decent amount of opportunity for customization involved (from automatic map switching and typical data fields, to hot keys from the mapping view.) The combination of a touch screen and four standard buttons was a little confusing at first as well, but once we realized that the 4 simply-labelled buttons did everything, and the touchscreen only helps to speed up the process did we more smoothly throughout. 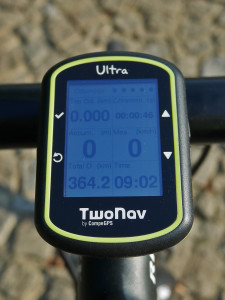 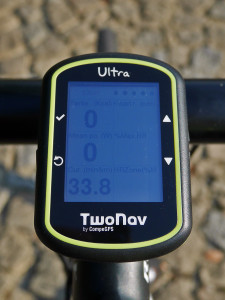 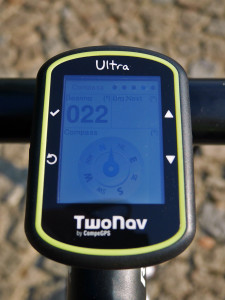 The data pages available to the ride are so extensive that we’ve really only scratched the surface with half a dozen rides. Just to start we saw navigation, ride duration, elevation graphing, compass bearing, and effort analysis pages. Each of those is then adjustable for individual data fields that we prefer. Plus there are separate profile setting from everything from mountain biking to geocaching. We’re not really sure if we’ll ever get into all of that, but there certainly is a wealth of data and customization for those who are into that kind of thing.

From a tech side the Anima+ and Ultra communicate primarily with ANT+. The Ultra adds Bluetooth, but only for a external speaker (mp3?) player that we can’t see using on the bike. All sensor connections are via ANT+. One fairly big limitation is that there is no power meter connectivity, just heart rate, cadence and speed sensors. The Anima+ and Ultra both connect via MicroUSB, but they have two different proprietary mounting interfaces, meaning we needed new mounts for each bike we tested them on. 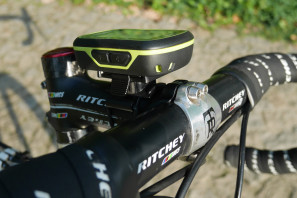 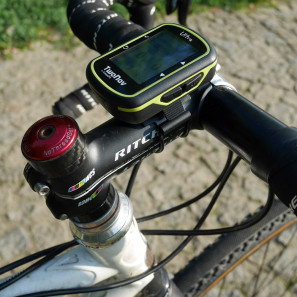 At first look one thing that bugs me in particular as annoying is the lack of clear Strava integration. Sure there are plenty of platforms out there to log and track ride data (and CompeGPS offers their own with Land), but if a company realistically wants to draw customers away from the established market players, the move has to be mostly painless. The TwoNav computers store their data in a format that it is not universally accepted, so it required us to import our rides into their own Land software before exporting to an industry-standard .gpx or .fit file. 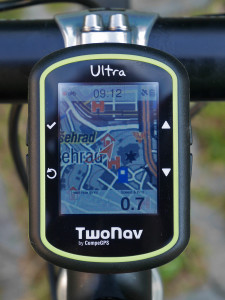 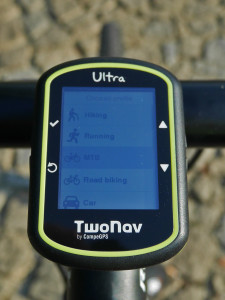 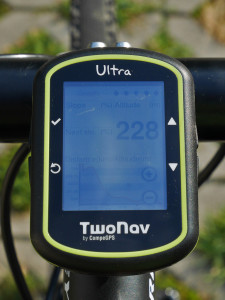 The real draw though are the maps. The TwoNav computers all ship with the 1 or 2 base maps that you select at purchase, so setup shouldn’t be much hassle. (Plus it includes general OpenStreetMaps vectors  of the entire world.) But since the maps are so detailed and sometimes large in file size (and you pay by the map area), it’s likely most riders will end up buying some additional map down the road and need to upload them via TwoNav’s free Land map management software to get it on the cycling computer. From our first looks that process is less than crystal clear. While the map data available is extensive (and at times mind-boggling) adding more and more maps may require some pretty brave tech skills. Just quickly digging around on TwoNav’s site, a support section isn’t exactly clear, and is probably the only place we see these computers truly lacking. Thankfully a website is easy enough to update (more so that the head units themselves), and we hope that some more straight forward setup tips and instruction videos may even be more easily available in the near future. 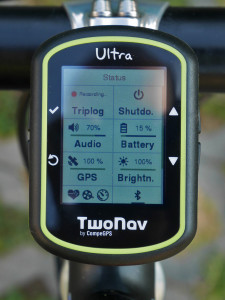 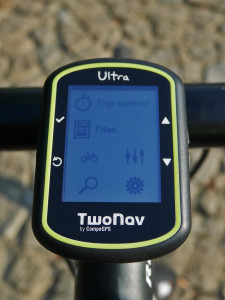 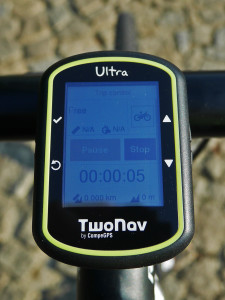 We’re not sure on the real-world battery life just yet. TwoNav clams typical life of 12hrs for the Anima+ and 8hrs for the smaller Ultra, but also talk about a survival mode that will get 22 hours out of the Anima+. In the default setting on the Ultra, the entire screen shuts down after 1 or 2 minuets, which obviously saves battery life, but means every time we wanted to check our speed or heart rate, we had to take a hand off the bar. We quickly reset it to stay on all the time, but haven’t ridden long enough to drain the battery yet (max ride 4 hrs.) One nice feature of the Anima+ is that it uses a removable battery, so it’s possible to have a secondary back-up. Plus  an optional power pack is available that lets it be powered by AA batteries for extended touring operability.

We’re  genuinely excited about the mapping capabilities of these GPS units. One of the big drawbacks of most cycling computers we’ve used so far is lackluster base maps. The TwoNav catalog of maps is amazing, and we are so happy to see the excellent topo maps from our home Czech, Slovak, and German regions available (at mostly reasonable costs.) We’ve got our maps loaded up now and are ready to explore. And we’ll come back with an update after we’ve spent a good bit of time with one unit or the other.

Don’t forget that Eurobike is coming in just a couple days. We’ll sit down with TwoNav and see what they have to say about our thoughts so far…

Looks nice, but when will these start-ups realise that proprietary mounting systems are not an effective way to build a wall around your products? Even Garmin gives you a GoPro adaptor mount with their Virb cameras.

On the power meter front; is that just a software fix?

Aside from that the maps and the screens look good. Form factor looks a little “chunky”.

I can’t get past the Comic Sans/Kid Font for Ultra. Does that make me shallow? No, but as a graphic designer, I couldn’t have that in my face for long rides. I’d have to scratch it off or put tape over it.

No power meter compatibility and no strava ease of upload?

No power meter capability? Why does one of the pictures show 92.6 mean watts? Is that an estimation based of HR, speed, elevation etc?

Ant+ sensor interface, except it’s not compatible with the only sensor that has any value at all. Propitiatory mounts, no easy strava compatibility…

Ok, I hope these are at least a lot cheaper than the competition (I’d pay $25-30 tops for one). Either that or they invent a time machine to go back 10-15 years to when this might have been relevant. I’m having a hard time seeing how this offers anything over my 7-year old phone.

@Pete. It looks like it is compatible with Powertap’s Powercal which is “the world’s first-ever power meter calculated from heart rate”. So yep, it’s an estimation. The units will give current and mean estimated power.